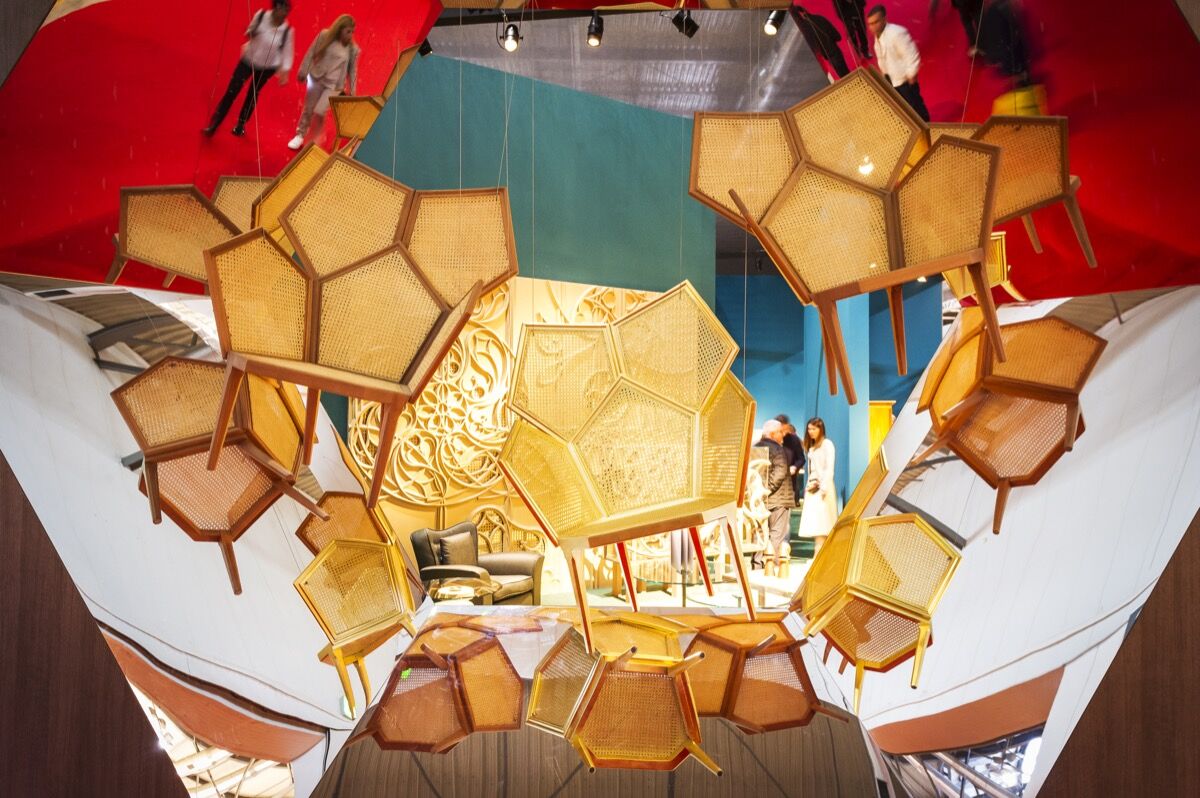 With more than 2,000 exhibitors from over 165 countries showing during Milan Design Week, it’s no wonder that the annual city-wide festival is regarded as a launchpad and forecast for the most anticipated design news and launches of the coming year. In addition to the week’s economic anchor, the Salone del Mobile trade show held at the Rho fairgrounds a few miles outside of the city, Fuorisalone (which literally translates to “outside Salone”) sees Milan’s showrooms, galleries and 19th-century palazzos taken over by installations, events, and parties for a six-day celebration of design, beauty, and innovation. All told, around 1,500 Fuorisalone events are scattered throughout the city this year. Sound overwhelming? Here’s a recap of the most buzzed-about sights and the four biggest trends to emerge from Milan Design Week this year. 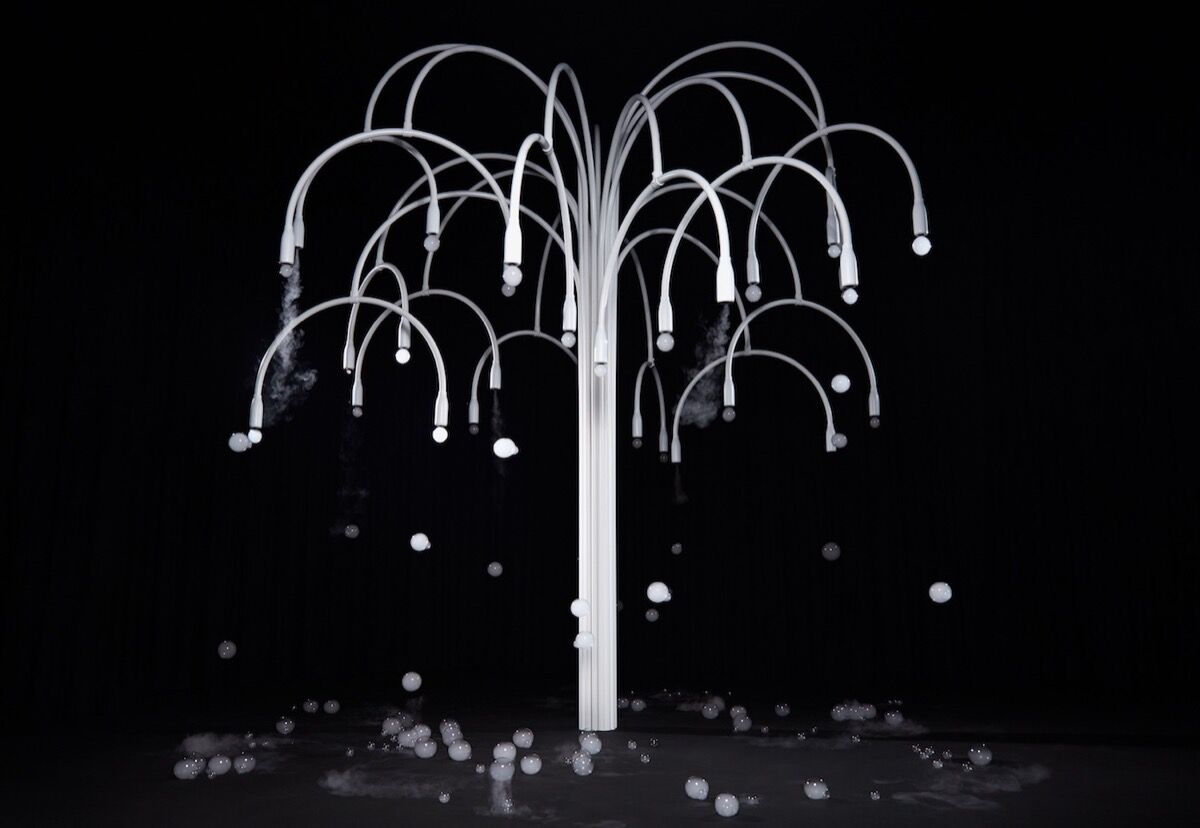 New Spring by Studio Swine for COS at Cinema Arti. Image courtesy of COS. 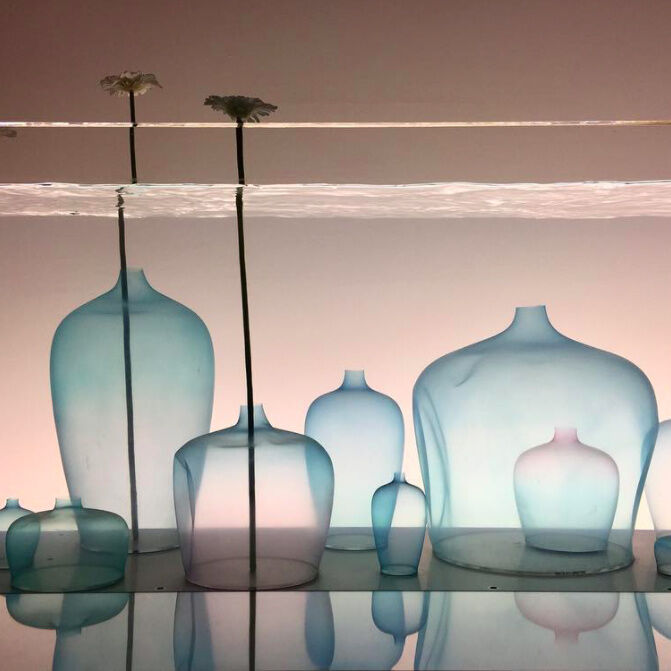 Invisible Outlines by Nendo at Jil Sander. Photo by @gnmrvd, via Instagram.

Is it possible for bubbles to be trending? Apparently so. Now in its sixth year at Milan Design Week, minimalist apparel brand COS has cemented its place as a design-driven entity. Following previous installations by Brooklyn-based studio
Snarkitecture
and Japanese architect Sou Fujimoto, COS paired with London duo
Studio Swine
this year to produce New Spring, an immersive, multi-sensory installation that engages sight, smell, and touch to evoke a childlike sense of wonder from even the most jaded skeptic. Set in a darkened hall of Cinema Arti, a large tree-like sculpture with branches evoking a public fountain or street lamp emits soft, cloudy globules of scent that vaporize into thin air upon bursting. 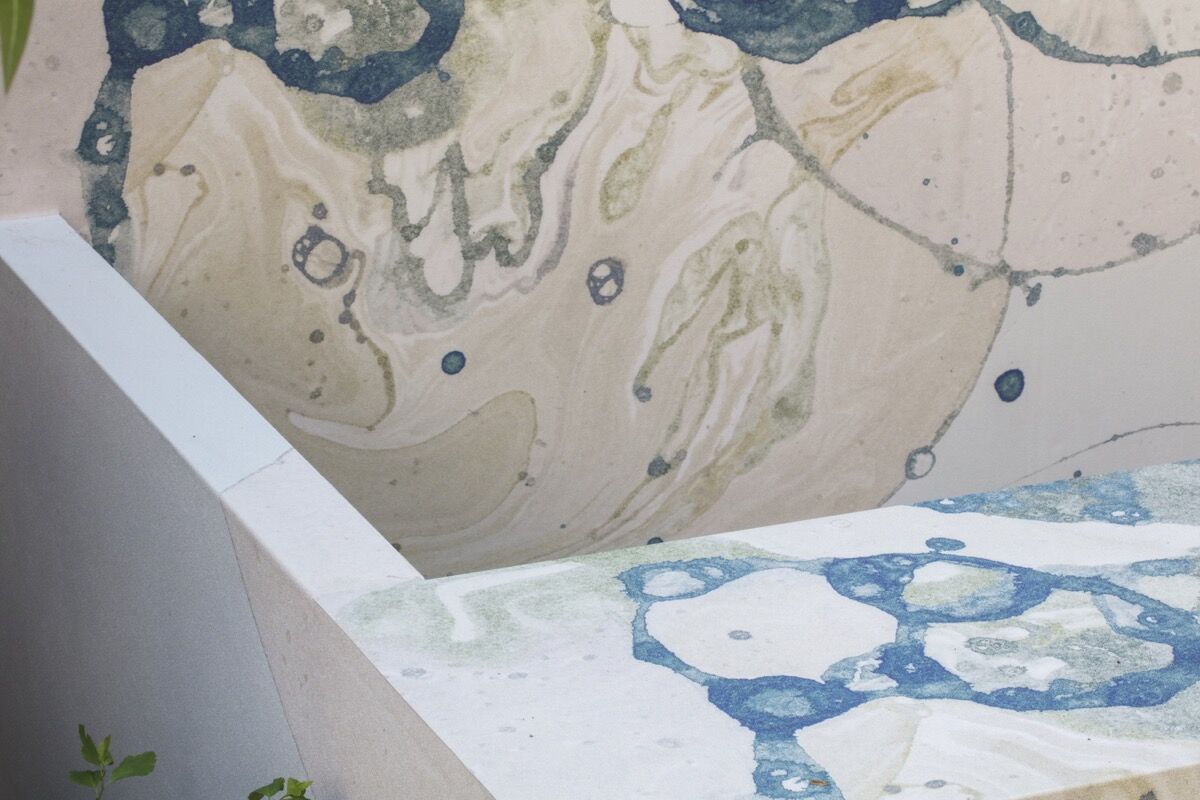 “Microcosmos” by BCXNY for Calico Wallpaper at H+. Photo by Lauren Coleman. 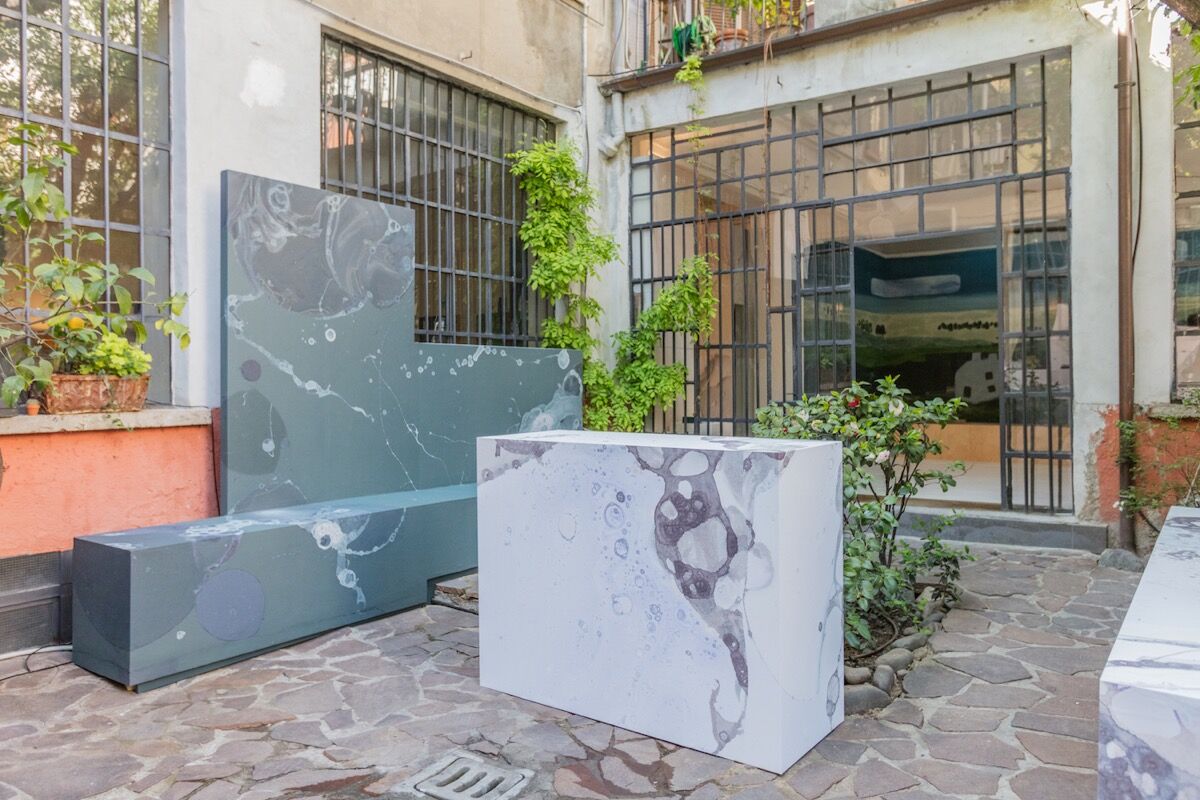 “Microcosmos” by BCXNY for Calico Wallpaper at H+. Photo by Lauren Coleman.

Advertisement
At h+, the Brooklyn-based company Calico Wallpaper—best known for its marbled graphics that elevate wallcovering to an art—premiered its first collaborative collection with designers
Ana Kra
š,
Faye Toogood
, Snarkitecture, and
BCXSY
. Among the highlights was “Microcosmos,” a watery graphic featuring enlarged bubbles. Elsewhere, as part of an installation called Invisible Outlines at the Jil Sander showroom, Japanese studio
nendo
submerged a series of its translucent jellyfish silicon vases in an aquarium tank, causing the fragile vessels to softly undulate with each motion of water and highlighting their ephemeral, delicate beauty. 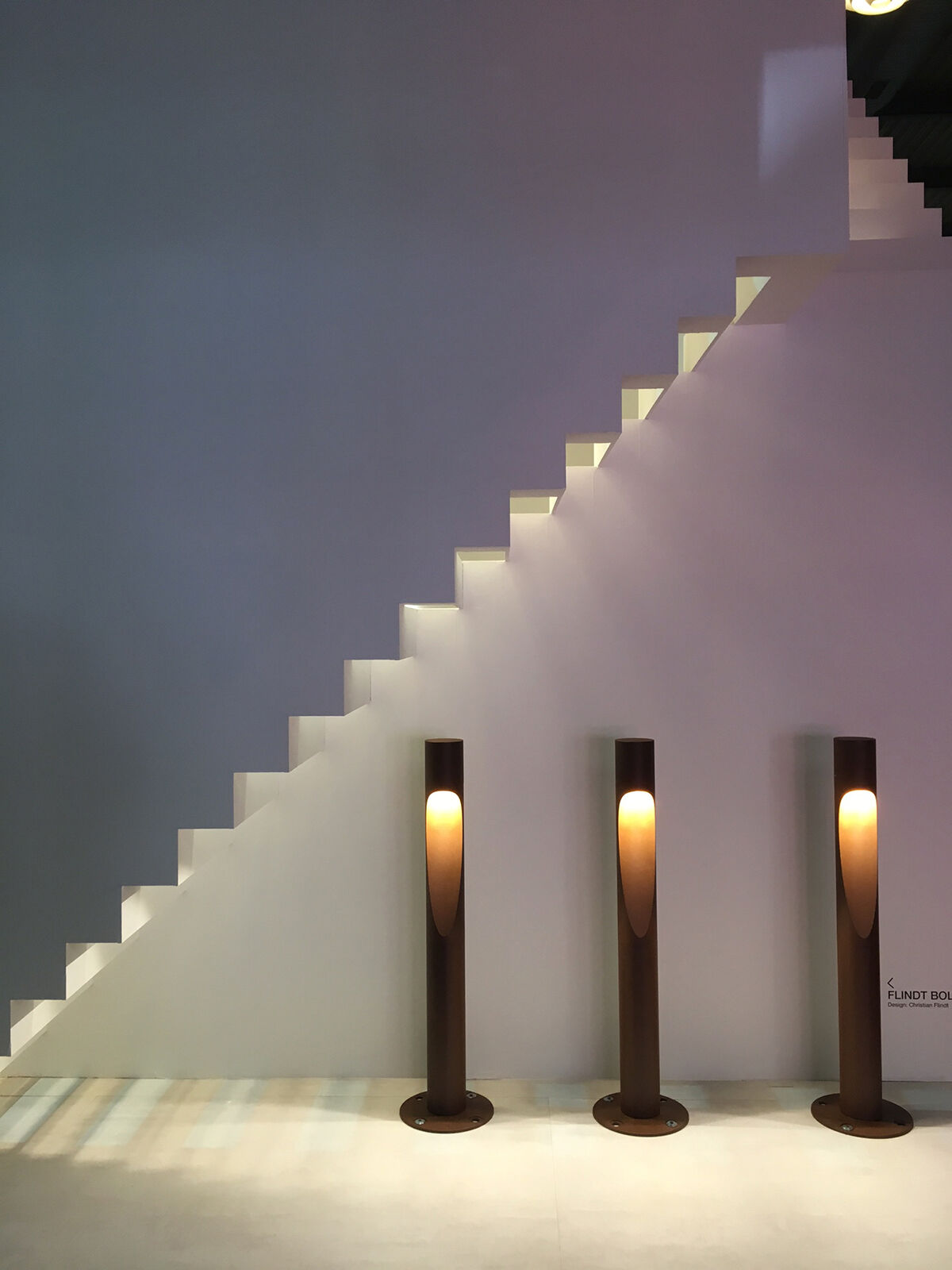 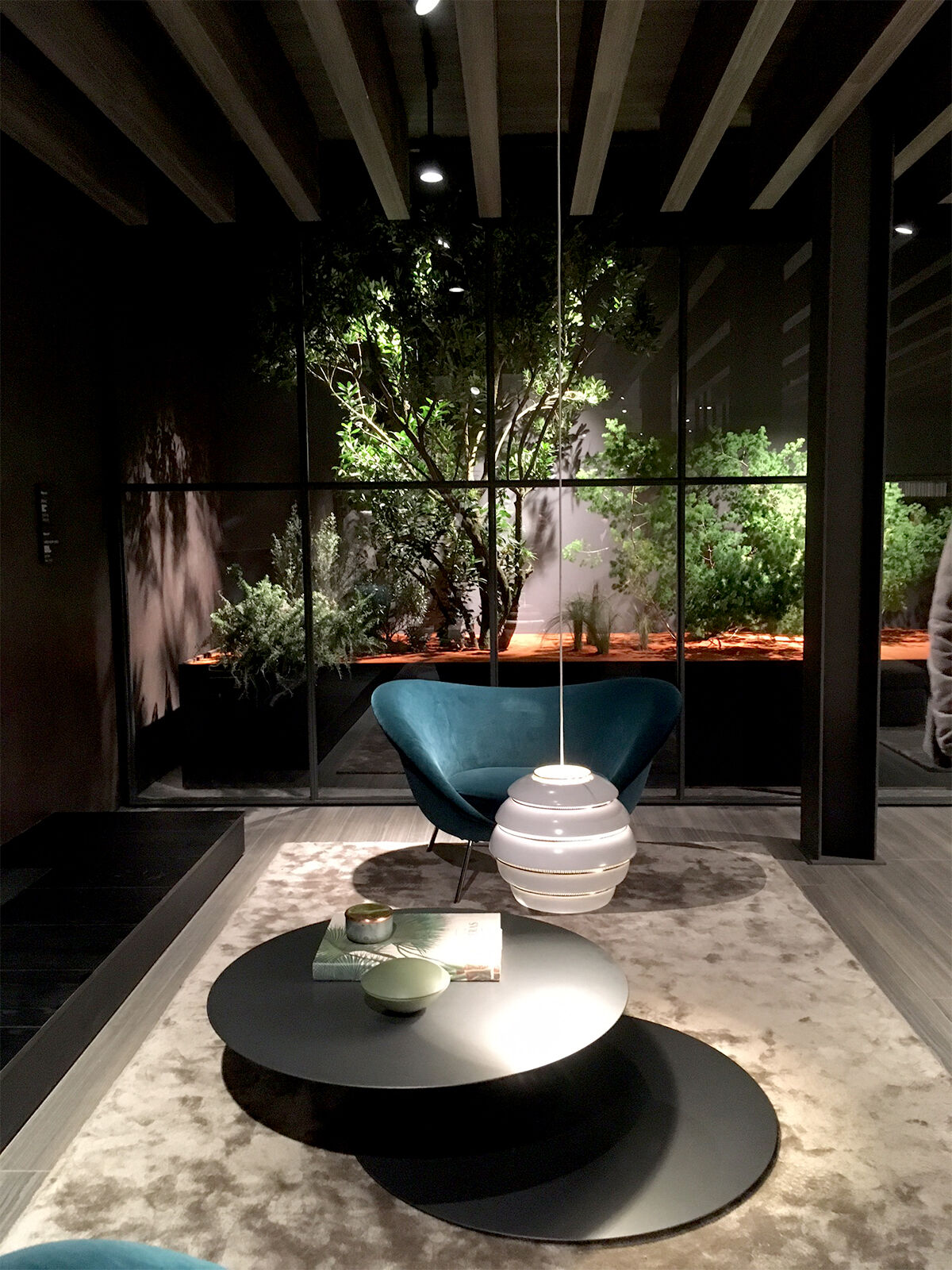 Tackling the rows upon rows of Salone del Mobile’s 20 exhibition halls is a test of endurance. At the Rho fairgrounds, design brands with the biggest market share and high-caliber designer rosters tend to congregate among each other, which means plenty of healthy competition is on full display. You’d be remiss to refer to these structures as simply booths—with companies like Kartell, Vitra, Knoll, Arper and Poltrona Frau each occupying thousands of square feet within steps of one another, and the tendency for immersive, over-the-top backdrops for a variety of furnishings runs high.
Head to the lighting brand FLOS for one of the best of the bunch. Walking through the installation offers an architectural experience in itself, in which finding the entrance is the first step: Circle its monolithic perimeter and you’ll find that despite peeks through the pale gray stucco-like walls that all but guard its contents from the show floor, there’s only one possible entrance that leads to a series of gallery spaces that unfold in a unique storytelling sequence. A lush courtyard with plantings sets the scene for the brand’s new outdoor lighting releases, then leads through to several galleries showcasing a range of releases from designers including
Michael Anastassiades
,
Konstantin Grcic
,
Ronan and Erwan Bouroullec
, and more.
While some of the other elaborate, pavilion-size booths at the fair require a timed entry ticket this one doesn’t, which also means you can expect it to be a bit more crowded—though with neighboring structures evoking shoji screens, shipping containers, a giant wooden crate, and even a prefab Eames House, the architecture is sure to lure you in. It’s a Disneyland of design. 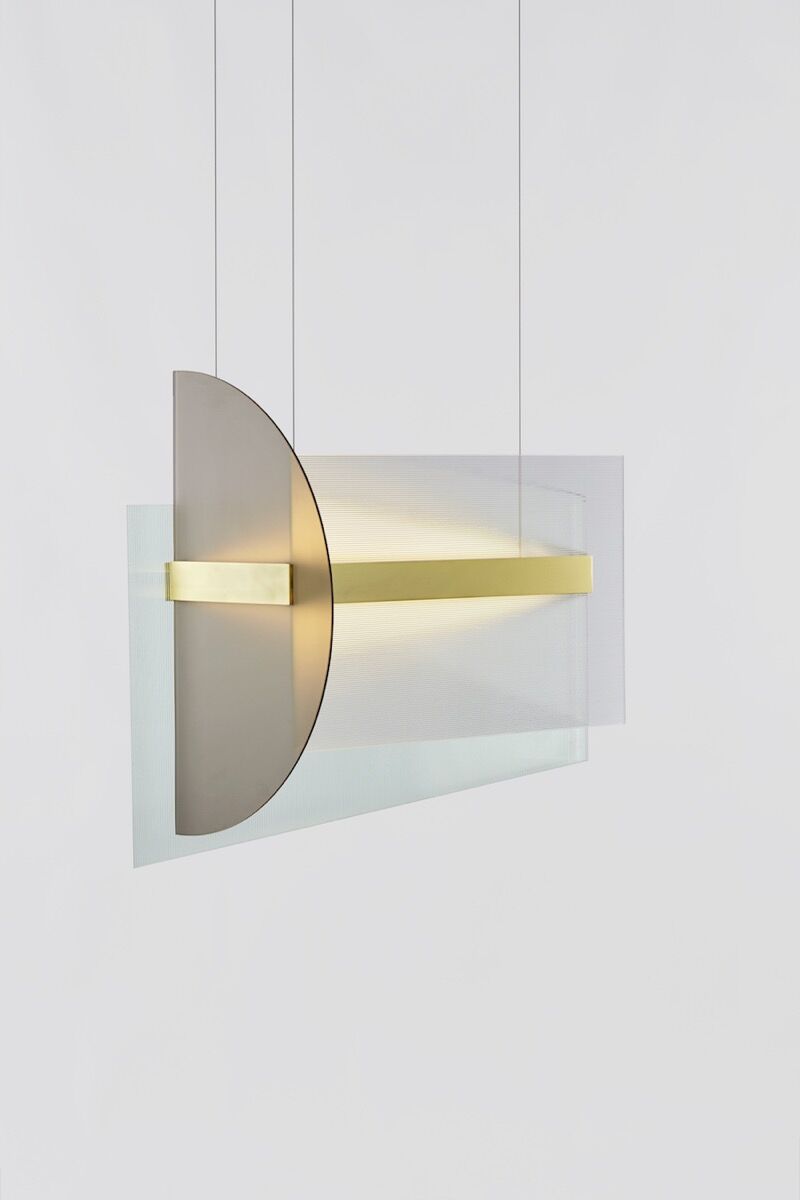 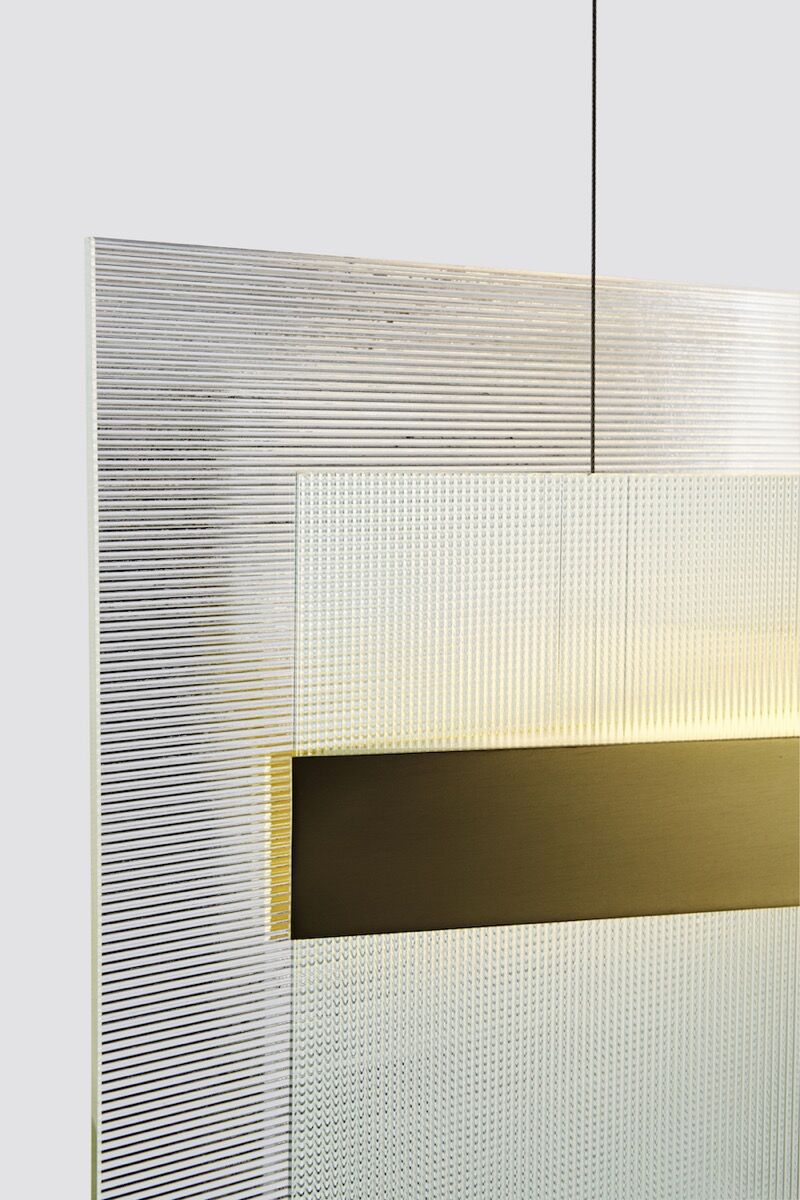 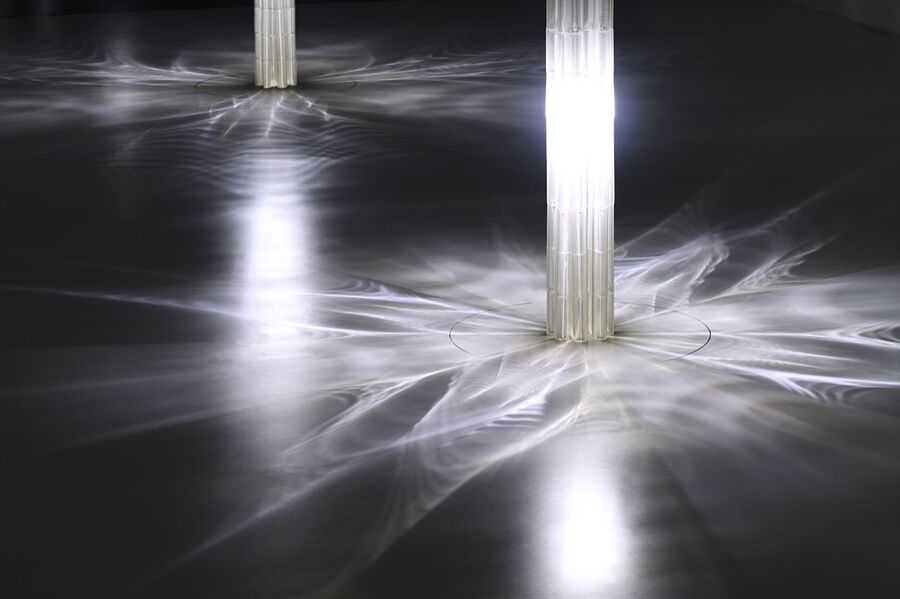 At La Triennale di Milano museum, an exhibition by Lexus Design Award features the work of emerging designers and an ethereal installation by biotech-inspired designer and architect Neri Oxman. Oxman presents a series of 3D-printed glass monoliths created in collaboration with the Mediated Matter group, which she leads at the MIT Media Lab. The works cast complex shadows when illuminated from within, creating an effect that’s like a lightning bolt suspended in time. 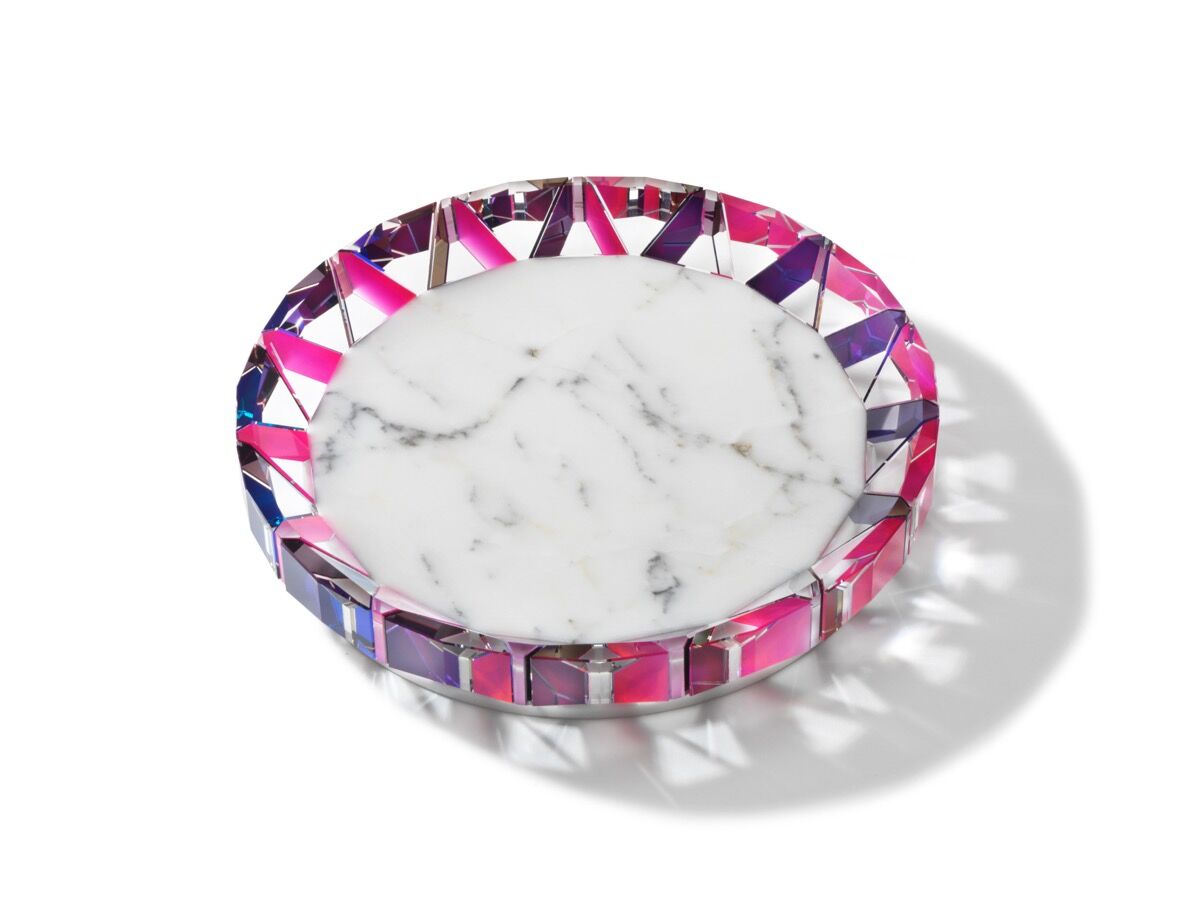 Elsewhere, some of the most vibrant, colorful works came from various offerings by Atelier Swarovski Home,
Studio Formafantasma
, Caesarstone, Nude, Herman Miller, and Moroso, collectively spanning furniture, lighting, textiles, and even surfaces. Color is everywhere, alongside a still-prevalent millennial pink. 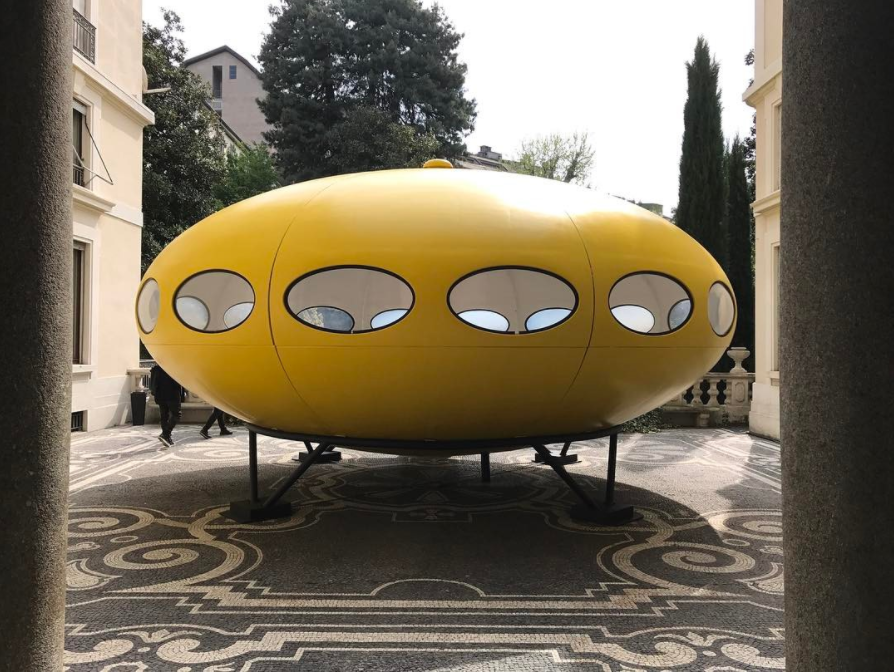 Amid the clamoring to define the new, several shows at Salone del Mobile revisited iconic historic works, reminding us that the future isn’t so far from the recent past. At the Herzog & de Meuron-designed Fondazione Giangiacomo Feltrinelli, the legendary furnishings company Cassina celebrated its 90th anniversary with a mini-retrospective of its legacy pieces in vibrant colorways. The presentation was set in a futuristic, sci-fi-chic exhibition that included a green room, shimmering iridescent curtains and heavy plastic drapes, an impeccable bathroom with a hazmat suit hanging on the wall, and, most exciting, a full-scale prototype of Refuge Tonneau, a prefabricated, barrel-shaped mountain structure that contains a running kitchen, bunk, and upper loft housed in an aluminum shell. Designed by
Charlotte Perriand
and
Pierre Jeanneret
in 1938 and produced as a one-off by Cassina in 2012, it resonates today for its economical use of space and portability, with slight survivalist undertones.
Concept shop 10 Corso Como exhibits Les Sculptures Utilitaires, a collection of Pierre Cardin’s groovy, space-age designs of the 1970s; and at Palazzo Bocconi, Louis Vuitton’s Objets Nomades presented its new collection of travel-inspired pieces alongside an installation of Finnish architect Matti Suuronen’s 1968 Futuro House—a canary yellow dome perched on legs that appears more like an alien spacecraft than the portable ski chalet that it was designed to be. Inside is a modular sofa by the late Pierre Paulin, whose family has also reissued several of his designs at Salone.
Old was also made new again through various recycled materials that launched at the fair, including
Max Lamb
’s “Really” seating collection for textiles company Kvadrat. The benches are each made from solid textile board, engineered from selvedge waste and end-of-life cotton and wool. At the Triennale, Hong Kong designer C. L. Lamb presented “Green Table,” a tableware collection made from biodegradable waste and food scraps, like lobster shells and tea grounds. The result bears an uncanny resemblance to speckled melamine.
For a more intellectual look at design’s next frontier, a collection of critical and spirited perspectives came from the designers at Atelier Clerici, which included an ongoing performance installation by students and alumni of the Design Academy Eindhoven. Called #TVClerici, the live-edited broadcast mashup of digital, analog, and augmented reality argues for communication systems to become a matter of design itself. The surreal scene tried to sell you nothing but provocation, and for that reason was unlike the series of otherworldly sights that filled the week.
Aileen Kwun
Related Stories