In July 2013, esteemed American artist
Walter De Maria
died, suddenly, the result of a stroke he suffered while in California. Before his unexpected passing, at the age of 77, he was still actively creating new pieces in New York, working out of the massive studio he kept on East 6th Street. He’d made great progress on a major installation begun two years prior, incorporating three classic Chevrolet pickup trucks. It was left unfinished—until now.
The installation, titled Truck Trilogy (2011–17)—which could arguably be considered De Maria’s final work—is being brought to fruition through a collaboration between the Dia Art Foundation and the Walter De Maria Estate, with Gagosian Gallery, which supported the fabrication of the trucks. The work will be unveiled at Dia:Beacon on September 22nd.
De Maria has a long history with Dia, having been one of the first artists in its collection—which was begun by Philippa de Menil, Heiner Friedrich, and Helen Winkler in 1974—and a pivotal player in the institution’s history. Truck Trilogy’s debut has been organized to coincide with the 40th anniversary of three of the artist’s major Dia commissions, which are also some of his most beloved works: The Lightning Field, The New York Earth Room, and The Vertical Earth Kilometer.
Dia curator Alexis Lowry emphasizes that the endeavor to complete De Maria’s work posthumously was carefully considered. “Refabrication or new fabrication is never entered into lightly,” she explains. “In this situation, the project was so far along, it was possible.” Faced with the daunting task of finishing the work posthumously, Dia and the estate were by no means flying blind. “The only reason we took this on is because we did know what he wanted it to look like when he died,” says Elizabeth Childress, director of the Walter De Maria Archives. Childress knew better than anyone, having worked closely with the artist from the late 1970s until his death, first as his assistant and later as his studio manager.
Importantly, De Maria had also completed maquettes of the finished trucks, which would serve as guidelines through which to carry out the artist’s intentions. “The crazy thing is if you look at a picture of the black truck model, and you look at the photograph of what the finished truck looks like now—they’re the same,” Childress enthuses.
The estate was also able to recruit a team of fabricators, from Art Crating Inc., Archive Fine Art, and Milgo/Bufkin, who had worked directly with De Maria on a previous work of a similar nature, Bel Air Trilogy (2000–11). “These were his teams—all the people who worked closely with him and understood. That’s critical,” she adds. “Once you worked with Walter long enough, you really understood his sense of perfection.”
Childress felt the piece was too important to the artist’s oeuvre not to finish. “Every day he’d come down walk into the studio, walk around the trucks, and kind of dream of what they were going to look like,” she recalls. “That’s what really made Walter happy—to be in the middle of a production.” She adds that back then, when he was in his seventies, he was eager as ever to keep creating and experimenting. “People asked if he wanted to go back and do a retrospective and he would say ‘No, I want to keep going, keep on doing new work.’” 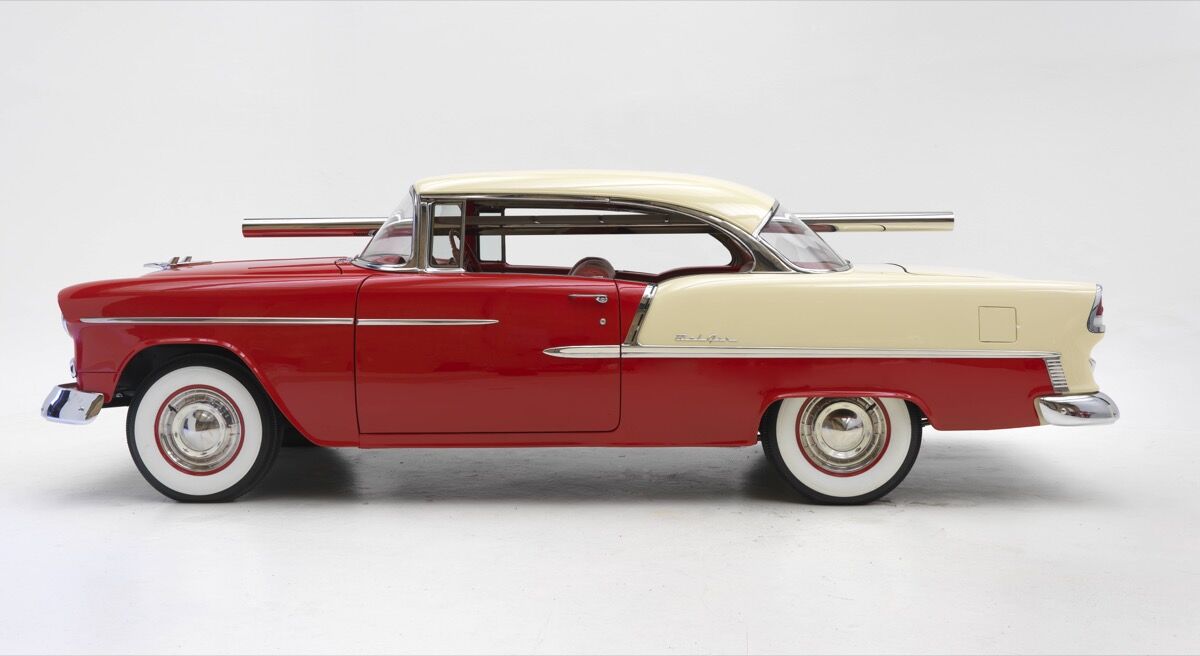 Advertisement
De Maria had begun the Truck Trilogy while he was working on another automobile installation, The Bel Air Trilogy (2000–11). For that work, the artist bought three 1955 Chevy Bel Air sedans, stripped them down to their simplest forms, removing parts like rear view mirrors and windshield wipers, and restored the cars to their former glory. His major intervention was to skewer each car with a signature, stainless steel rod. The slick, shiny red-and-white cars were the focal point of an exhibition at the Menil Collection in Houston in 2011, and were later bought by the Prada Foundation.
With Truck Trilogy, he chose to employ another classic Chevy, using the pickup as a pedestal for stainless steel rods—each truck would contain three vertical rods, one circle, one triangle, and one square. He began to seek out models made between 1950 and 1955, and found three to his liking: a green one, found in Texas, and a red and a black one, both found in Kansas, and purchased from the same seller.
Before dying, De Maria had completed most of the process of stripping down the trucks. After his death, the sculptural vehicles were in his studio, and they remained in a state of limbo until 2014, when the building was sold, and the estate needed to vacate the premises. They were initially put into storage at Dia: Beacon, but once plans were put into action to complete them, they were moved to Archive Fine Art’s production studio in Saugerties, New York.
There, fabricators were charged with picking up where De Maria left off. The ultimate vision the artist had was to restore the cars to their original prime, and to refine them to their essential form. They finished up the modifications to the exteriors and did some work on the interiors, sourced original hubcaps, and repainted the cars, using the original hues. A significant hurdle was left: developing the frames so that they could mount the steel poles in the beds of the trucks—a step of the process that De Maria had not yet reached. Childress says that it’s an element of the production that the artist would’ve asked others for advice on; Dia and the estate ended up finalizing the logistics thanks to Michael Kellough, a fabricator with whom De Maria had worked for some 20 years.
Childress describes the process as putting together the pieces that De Maria had left behind, not creating something new on his behalf. “It was really the fabrication of Walter’s vision,” she explains. “It certainly wasn’t developing or having a vision—that was Walter’s.”

A previous version of this article incorrectly stated that De Maria suffered a stroke while visiting his mother in California. De Maria had traveled to Santa Barbara for his mother’s 100th birthday in early June; however, he went on to Los Angeles, which is where he suffered a stroke on June 4th and died on July 25th. The article also previously misspelled Michael Kellough’s name.
Casey Lesser is Artsy’s Lead Editor, Contemporary Art and Creativity.
Related Stories