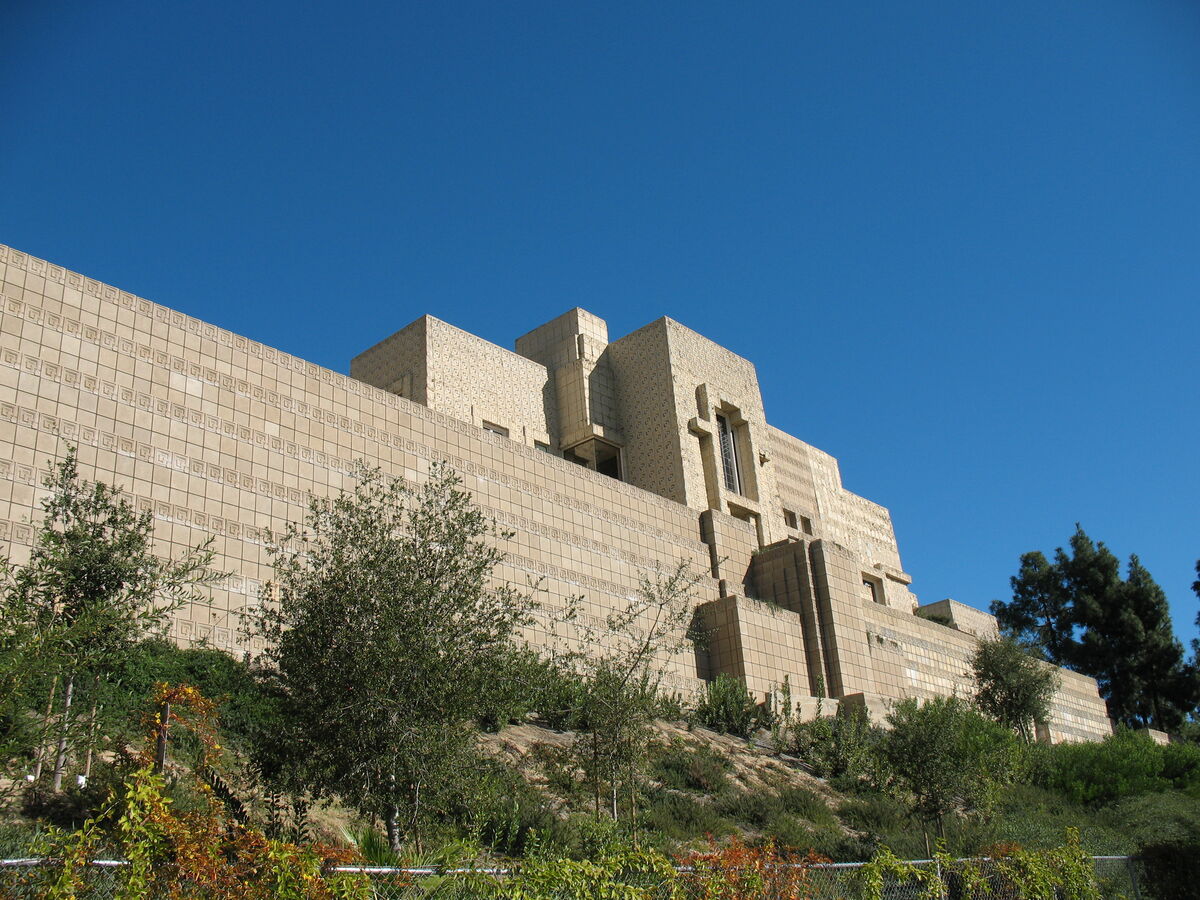 Hollywood has always seen something sinister in the Ennis House, a 1924
Frank Lloyd Wright
design in the Los Feliz neighborhood of Los Angeles. In the dozen or so movies in which it appears, “Its most frequent role is the mansion of some gangster chieftain,” says film historian Thom Andersen in the documentary Los Angeles Plays Itself. The Ennis House has made cameos as the bad-guy lair in Blade Runner and “Buffy the Vampire Slayer,” and served as the titular home in The House on Haunted Hill.
In reality, the Ennis House is somewhat ominous, due to its Mayan Revival style; made from textured concrete blocks, it’s vaguely reminiscent of an ancient tomb. At the time, Wright had been looking to pre-Columbian Latin American ruins for inspiration. He was among a group of architects of that era, including his son Lloyd Wright, who were taking Mesoamerican architecture’s most dramatic features—hieroglyphs, ziggurats, ornate bas reliefs, and more—and giving them the Hollywood treatment. Liberally applying heavy doses of artistic license, they romanticized and remixed the Maya with the Aztec and the grandeur of
Art Deco
. Their familiarity with the source material was, unsurprisingly, very shallow.
“Frank Lloyd Wright had a very typical, but mistaken, view of the Maya,” says curator and Wellesley College senior lecturer James Oles, a contributor to the Los Angeles County Museum of Art’s (LACMA) current exhibition “Found in Translation: Design in California and Mexico, 1915–1985.” 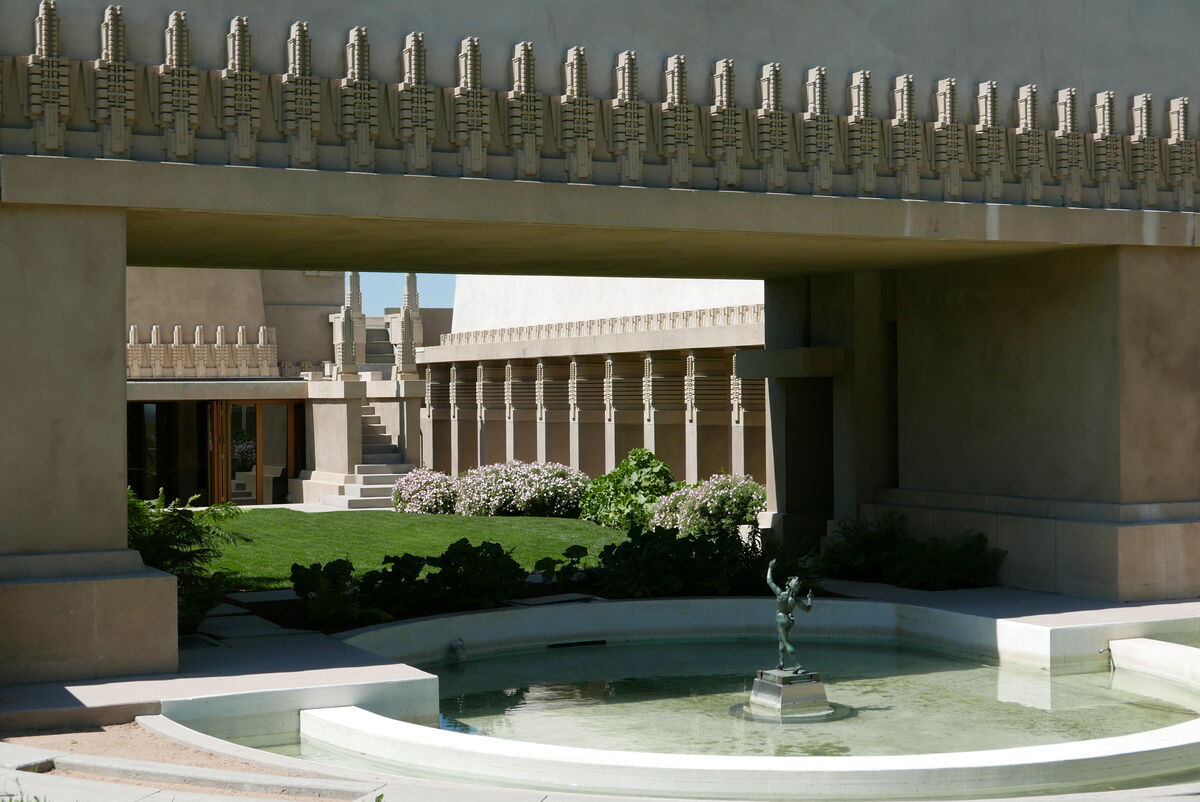 “In the early 20th century, American archaeologists were mainly responsible for excavating Maya sites,” Oles continues, “and they idealized them in the American popular imagination as a democratic, peace-loving people.” It wasn’t until the late 20th century that Mayan hieroglyphs were deciphered and proved otherwise.
Now, during “Pacific Standard Time: LA/LA,” a Getty initiative that explores where Latin American and Latinx art coincides with Los Angeles, LACMA’s show is one of several giving the Mayan Revival style a more incisive look.
LACMA traces Wright’s fascination with the Maya back to 1919, when he began construction on The Hollyhock House—the centerpiece of oil heiress Aline Barnsdall’s sprawling East Hollywood estate. Its crown-like ornamentation, canted walls, and foreboding doorways are the spitting image of the chambers that top the Mayan pyramids of Palenque, Mexico—though modified with an infusion of disparate influences, including Cubism, Japanese minimalism, and Hollyhock motifs (Barnsdall was fond of the flowers).
In the houses that followed, Wright developed his use of textile blocks. These concrete bricks, impressed with geometric patterns, give the Ennis House (as well his 1923 Storer House, 1923 Millard House, and the 1924 Freeman House) its hieroglyphic texture. Advertisement
Los Angeles in the early 20th century was something of a blank slate, architecturally speaking, so it was built up, at least partially, Oles says, by “sucking up the ancient history of other countries and mangling it in the process.” Local architects recreated the architecture of Europe with the accuracy of a movie set, giving rise to various other pastiche revivals, including Dutch Colonial, Tudor, and Italian Renaissance. Wright, however, called the popularity of Spanish Colonial Revival a “tawdry Spanish medievalism.” Eager to develop a new, non-European vernacular inherent to Southern California, he looked south.
The exotic grandeur of the Maya also resonated with the spirit of the roaring ’20s, the glamour of Old Hollywood, and the extravagance of
Art Deco
. In 1927, an opulent movie palace called The Mayan opened in Downtown Los Angeles (it later became a movie set, a pornography theater, and the concert venue and nightclub it continues to be today).
An ordinary box at its core, The Mayan’s interiors and exterior were decorated by sculptor Francisco Cornejo as a spectacular mash-up of Central and Latin American typologies: Zapotec feathered characters on the facade, Mayan tiles on the floors and water fountains, Incan stonework on the walls, and a grand chandelier modeled after the Aztec Sun Stone calendar hanging from the ceiling. 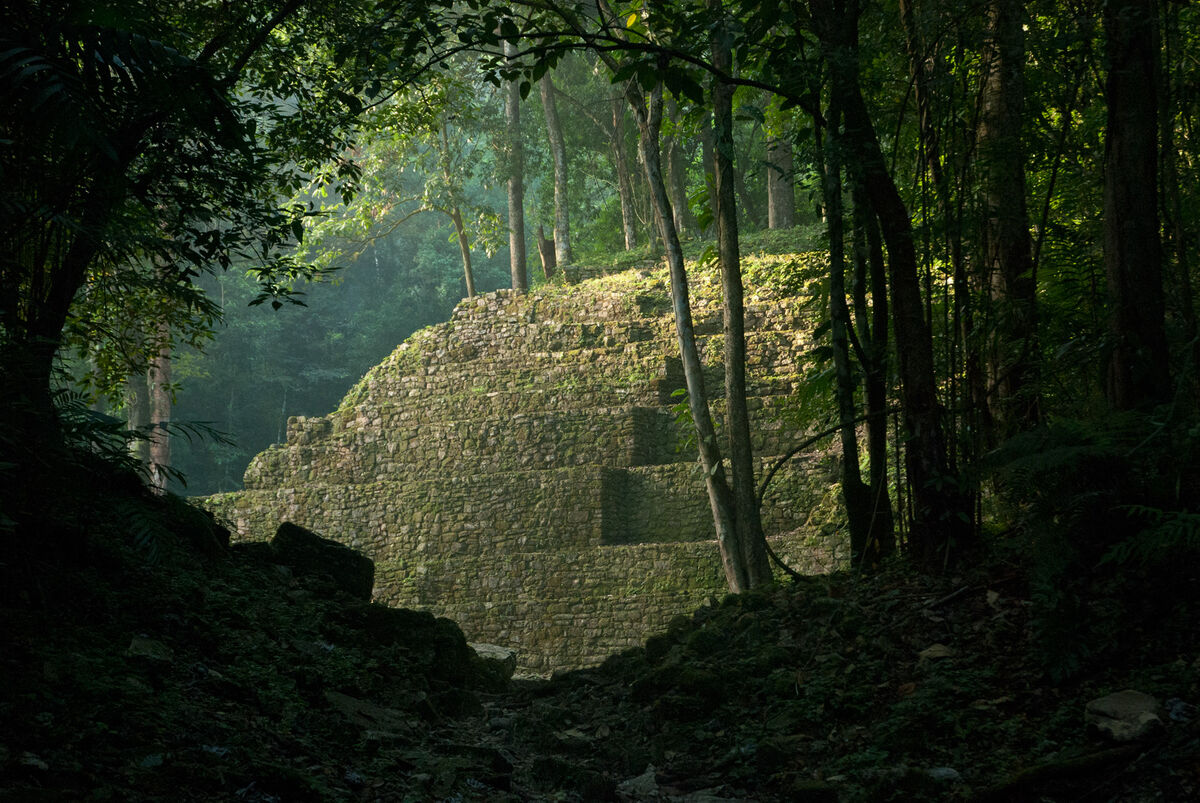 “It’s an exuberant overload of information,” L.A.-based artist
Clarissa Tossin
says of The Mayan’s walls. But it’s problematic, too. “It’s an appropriation that was translated, mistranslated, and recreated with these complications of misrepresentation,” she adds. Knowing that Los Angeles was a city where Mayan languages are actively spoken by a small part of the population, Tossin took it upon herself to untangle some of the confusion that Cornejo had made.
Through research, she found three specific archaeological sites that recur through his work: Quiriguá and Piedras Negras in Guatemala and Yaxchilán in Mexico. While they’ve been modified and Frankensteined together, a few hieroglyphs are still identifiably intact, and Tossin’s PST solo exhibition “The Mayan,” on view at Commonwealth & Council, illuminates some of their original meaning.
Infusing life back into the source material, she made casts of Cornejo’s walls and doors with fleshy swathes of silicone, and hung the imprints of the hieroglyphs throughout the gallery. Through sculpture, she retells stories of deities depicted on ancient Mayan pottery and murals: A long sinuous braid of synthetic hair on the gallery floor interwoven with emerald rooster feathers recalls the mythical feathered serpent, and hands and feet locked in the gestures of ceremonial dances protrude from the walls. 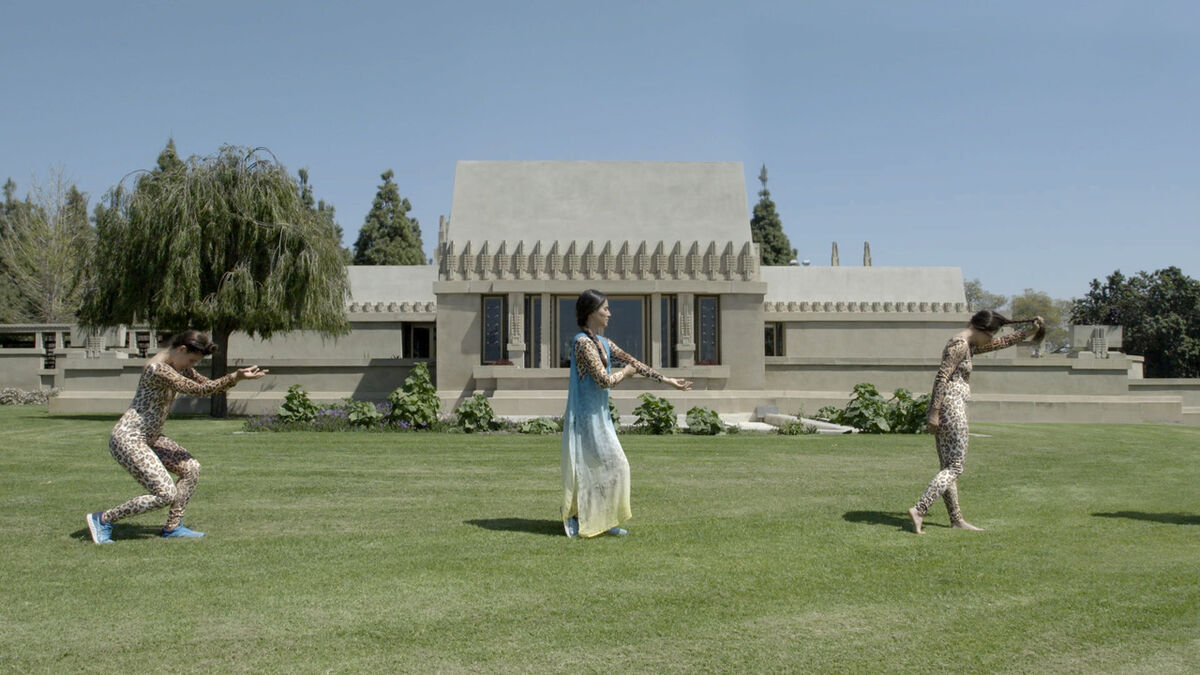 These ceremonial dances are the centerpiece of her short film, Ch’u Mayaa (Maya Blue), on view currently at the PST show “Condemned to Be Modern” at the Los Angeles Municipal Art Gallery. Coincidentally, the gallery sits next door to Frank Lloyd Wright’s Hollyhock House, which stars in Tossin’s film—not as a bad-guy lair, but a temple for ritual dance. The idea came, she says, after studying the placement of platforms and hieroglyphs within Mayan temples.
“The way the body circulates in that space is very performative, even in terms of the meticulous dexterity used to carve the hieroglyphs,” Tossin says. With dancer and choreographer, Crystal Sepúlveda, the film reinserts the Mayan body into Wright’s temple, using the gestures depicted in these images, and overlaid with the sounds of exotic birds.
To Tossin, the Mayan aspect of this house is too often overlooked. “The idea was to make work that appropriates the building back and asks that this work of architecture be discussed in the context of a lineage of Mayan language.” In short, giving credit where it is due.
Janelle Zara
Related Stories