Artsy Editors
Oct 30, 2015 12:13pm
Frank Stella
is frequently described as one of America’s most important living artists, and for a good reason. Nearly 80 years old and still going strong, he has impacted the course of abstract painting like no other, not only pushing it past
Abstract Expressionism
and into
Minimalism
in the late 1950s, but rejuvenating the medium in the 1970s when others were sounding its death. “It’s hard to imagine art after 1950 if Stella didn’t exist,” says Michael Auping, chief curator at the Modern Art Museum of Fort Worth, which co-organized the highly anticipated Stella retrospective opening at the Whitney Museum of Art this week and traveling to Fort Worth in April. Stella was only 23 when he first showed his work at MoMA in 1959. He’s still the youngest artist ever to have had a major retrospective at MoMA—at the age of 33, in 1970—and one of only a few to have had two retrospectives at the museum. (His second was in 1987.) His Whitney exhibition, the museum’s first major solo show in its new Renzo Piano-designed landmark in Manhattan’s Meatpacking District, is Stella’s first U.S. retrospective since 1987 and the largest Stella show to date.
The 120-some works demonstrate the artist’s incomparable range of abstraction and the thrilling irreverence he displayed. That irreverence extended to his own accomplishments and transformations of his style, from his “Black,” “Aluminum,” and “Copper” paintings—works that Auping calls “the holy grail of Minimalism,” which rejected illusionism for the flat, physical presence of the canvas—to his tirelessly dynamic, mural-like paintings and sculptures that are as expressive and exuberant as his earlier works were subdued. In between, of course, are all of his innovations in color and shaped substructures, including the “Protractor Series,” his irresistibly asymmetrical “Irregular Polygons,” and the “Polish Village” series of the ’70s, which saw his work begin to come off the wall.
For those who connect Stella to his 1950s and ’60s accomplishments—his monochrome surfaces covered with right-angled stripes and his radically shaped canvases—this exhibition makes a case for just how game-changing his later paintings are as well. “In the ’70s, there was a point when everyone was saying painting was dead, and asking what painting needed. And Frank said it can’t just sit there and be about nuance and twisting the wrist, and a little dash of red there and a little dash of blue there. It needs physicality,” says Auping. “He made painting, probably more than anyone, have the physical impact of sculpture.” According to Auping, many young artists in the late ’70s and early ’80s took that to heart. “When you look at his ‘Exotic Bird’ series with all his curlicues and glitter, and layers and layers of painting three feet in depth, you know that
Julian Schnabel
was looking at those. And you know that
David Salle
was looking at all of these layered possibilities,” says the curator.
Stella’s impact has not only been passed on through his art, but through his teachings. In the ’80s, for instance, he gave a series of highly influential lectures at Harvard, later published in a collection titled “Working Space.” “Every artist I knew was talking about those lectures. And dealers too. Everyone was interested in the fact that this guy was sort of singlehandedly making a new case for painting. I think the ’80s were almost as important for Frank as the ’60s,” Auping recalls.
On the occasion of Stella’s retrospective, we took a look at the legendary artist’s impact on contemporary art today. This isn’t to say that the 10 artists we’re spotlighting are working in a “Stella style,” or even that they have looked to Stella for inspiration. Rather, we chose a wide array of art that would be hard to imagine today if Stella had not first paved the way with his experimentations in abstract painting.

Sarah Morris
Burle Marx - Copacabana [Rio], 2011
White Cube
Advertisement
Morris’s hard-edged abstractions have a crisp, flat, graphic quality and a vibrant palette that call to mind Stella’s late ’60s Minimalism, particularly his “Protractor” series of massive shaped canvases painted with interlacing right angles and arcs. Morris, who makes films in addition to paintings, brings a postmodern referent into the equation. Her works tend to investigate the psychology and semiotics of cities. Her 2008 “Beijing” series, for instance, features Stella-like patterns referring to both the five interlocking rings of the Olympics and the city’s traffic-jammed “Ring Roads.” Stella, while long defined by the infamous Minimalist truism he uttered in the mid-1960s, “what you see is what you see,” was not without his own architectural reference points by the time he go to his “Protractors.” Inspired by his trip to Iran in 1963, the patterns from that series were named for ancient circular-plan towns in Asia. 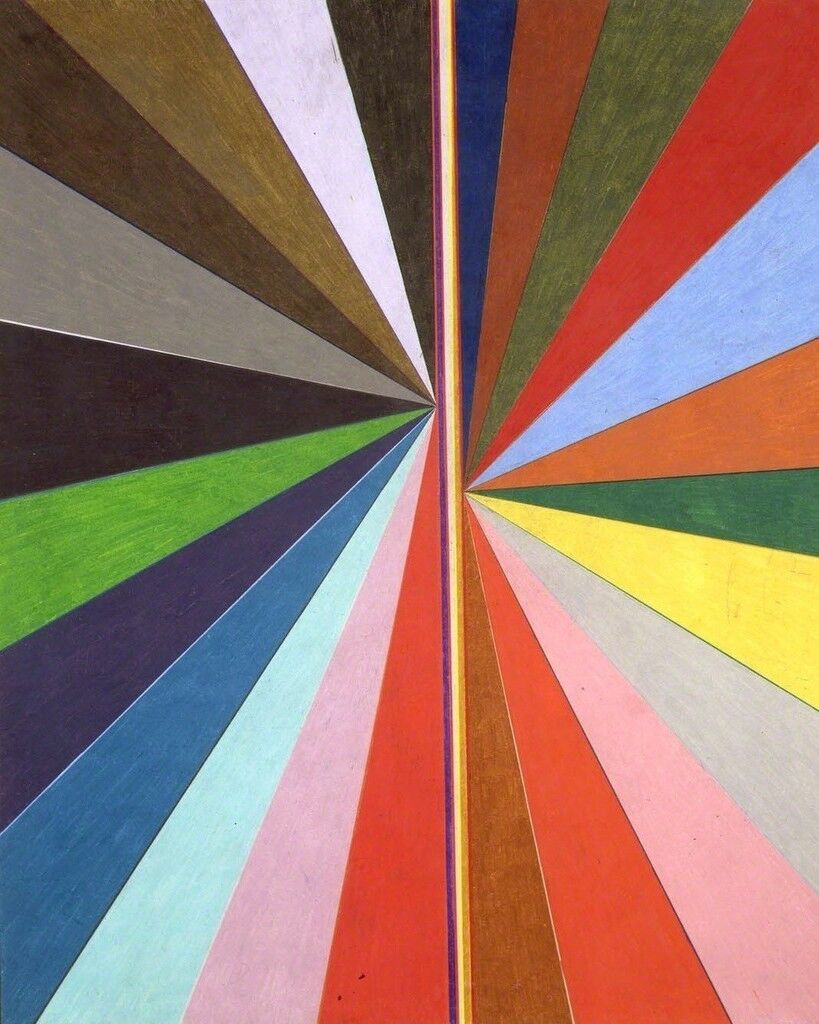 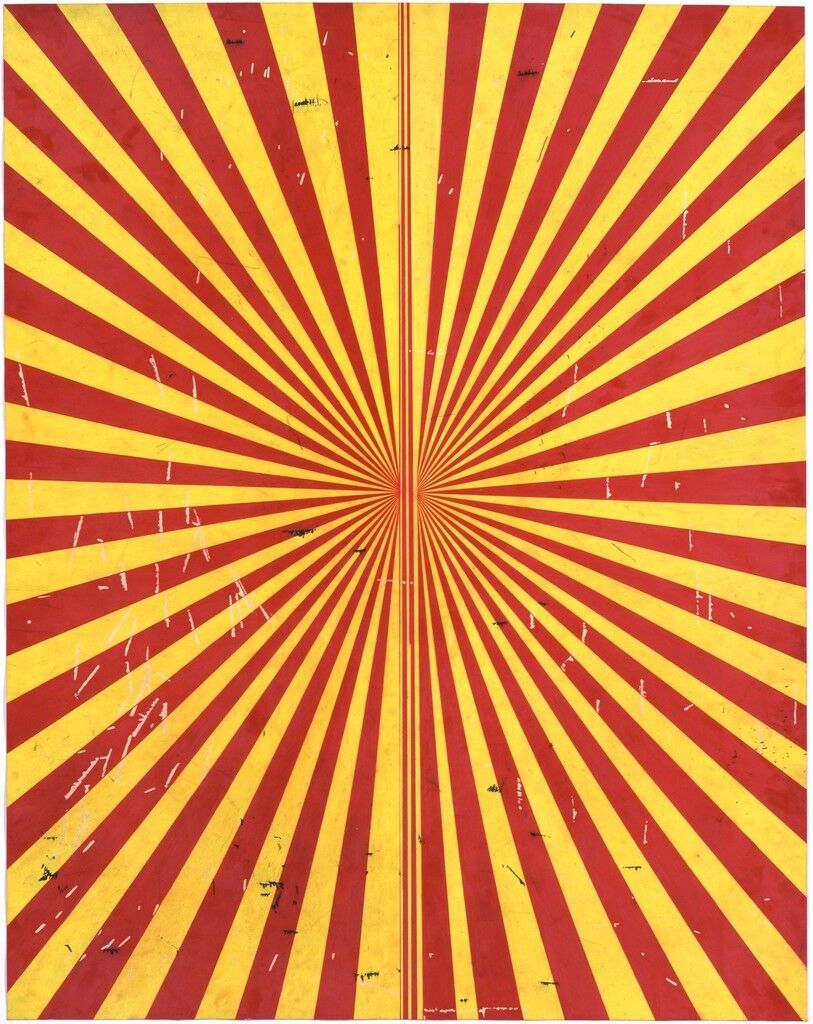 Mark Grotjahn
Untitled (Crimson Red and Canary Yellow Butterfly 796), 2009
Gagosian Gallery
Mark Grotjahn’s “Butterfly” paintings and drawings, made in the 2000s, have been called Stella-like before. Though he’s far more interested in vanishing points than Stella ever was, the connection is no surprise considering his colorful, consecutive graphic stripes. But another, perhaps less obvious, reason Grotjahn makes this list is that his more recent body of work—on view at Anton Kern this fall—takes the physicality and objectness of painting to new heights in heavily painted bronze pieces that are both sculpture and painting.

Lives and works in London. 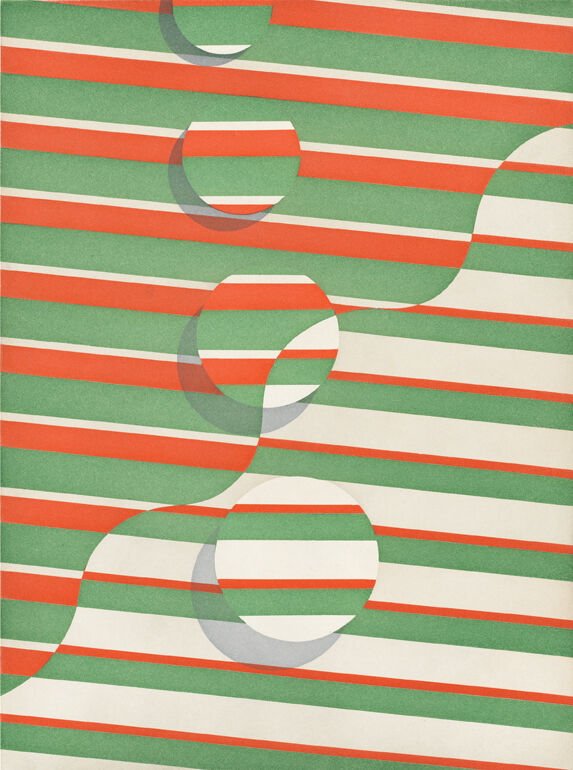 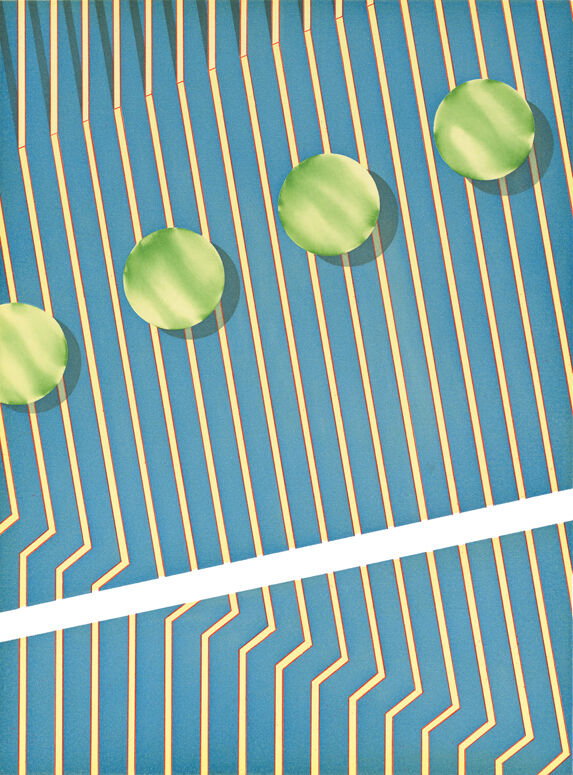 Tomma Abts
Untitled (Gap), 2015
Crown Point Press
Abts paints strangely discontinuous geometric forms that overlap and abut each other without any real compositional laws, creating the illusion of two and three dimensions within the same picture plane. They retain the hard-edged graphic simplicity of Minimalism, while incorporating passages of shadow and depth into their surfaces. The mix is quietly radical, deconstructing illusionism while embracing it. 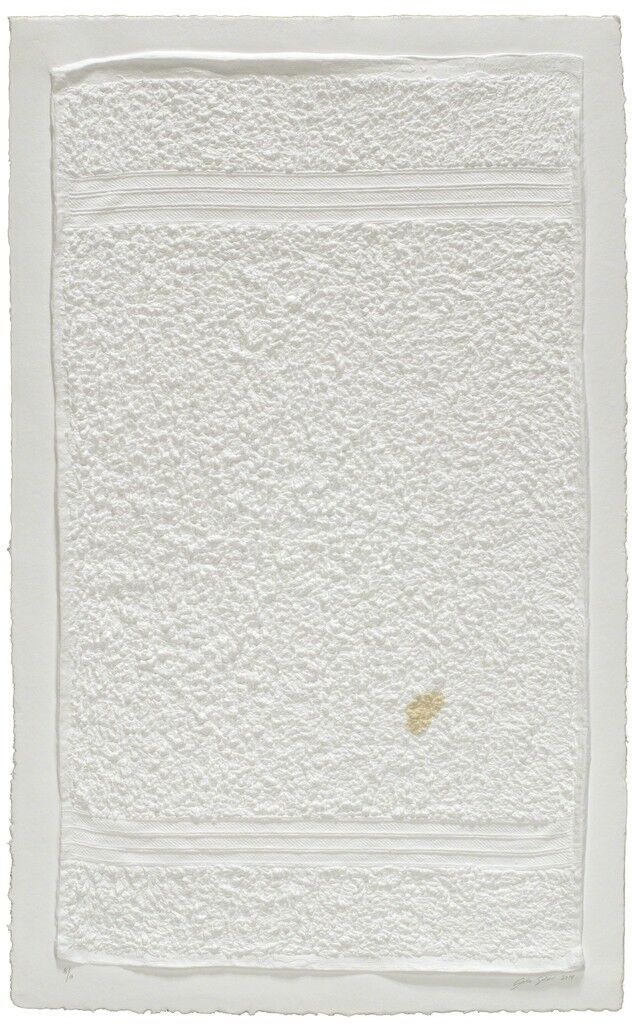 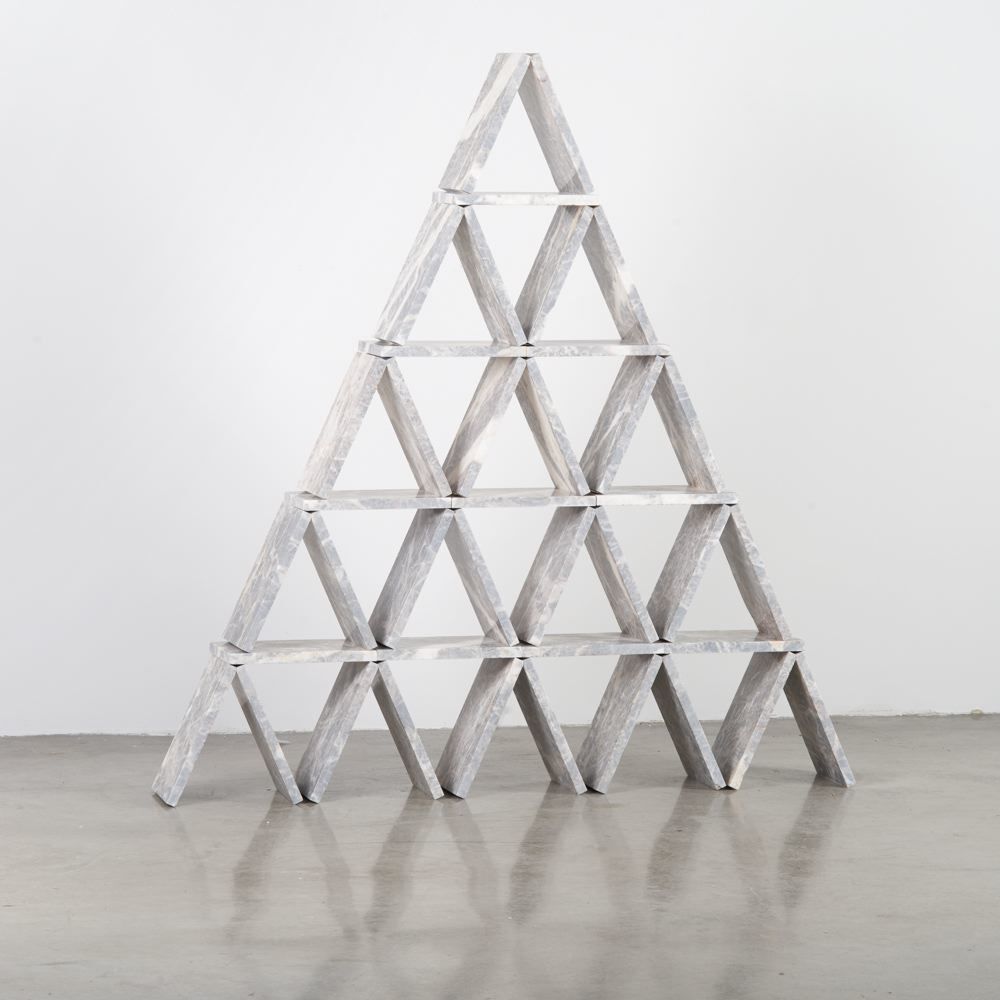 Analia Saban
House of Cards (2015 -), 2015
Tanya Bonakdar Gallery
It’s hard to imagine what kind of reception Analia Saban—one of the more interesting and promising young artists out there—would have received had Stella not done away with the rectangular canvas 50 years ago. Her early grocery-bag casts of solid paint and encaustic paintings, bulging pillow-like constructions attached to stretcher bars or a canvas, literally turn paint into objects. Works like her sagging, inked-canvas Painted Rag (Linen Canvas) (2015), hanging like a towel on a hook, have no use for stretcher bars at all. 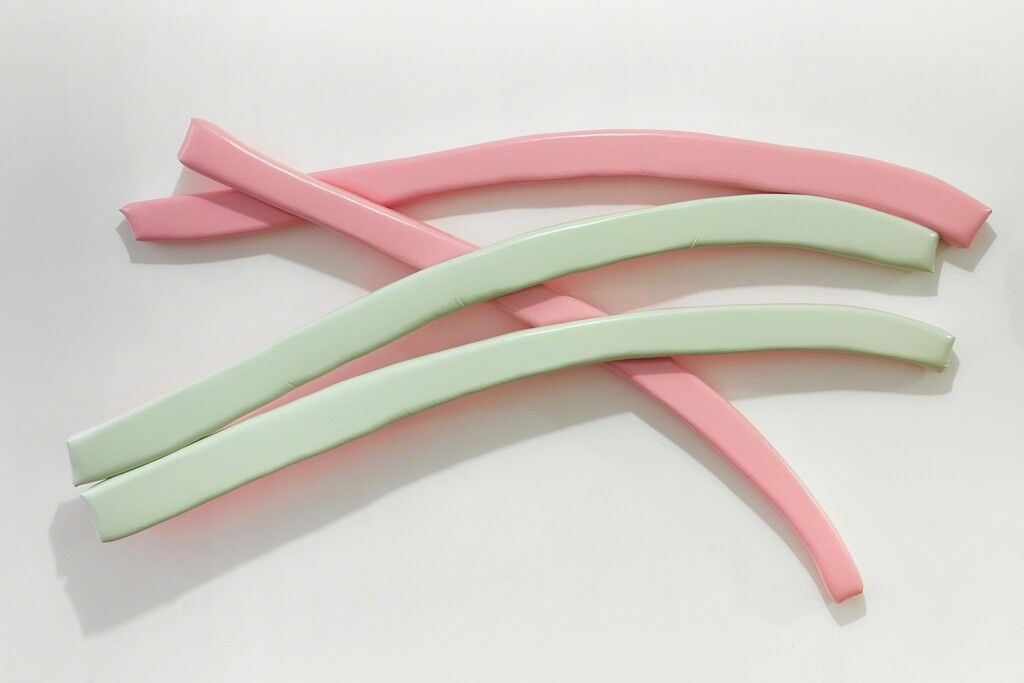 Justin Adian
Wayfaring, 2015
Almine Rech
Justin Adian has given
Minimalism
a good dose of tactility and humor in his puffy, pared-down geometric paintings. An update on the shaped canvas, his very object-like paintings have foam lying beneath their painted surfaces, giving them a cushion-like appearance while maintaining their sleek, monochromatic surfaces. Gone are any hard, angular edges—in favor of gentle curves as the foam gives way to tightly pulled canvas.

Lives and works in New York. 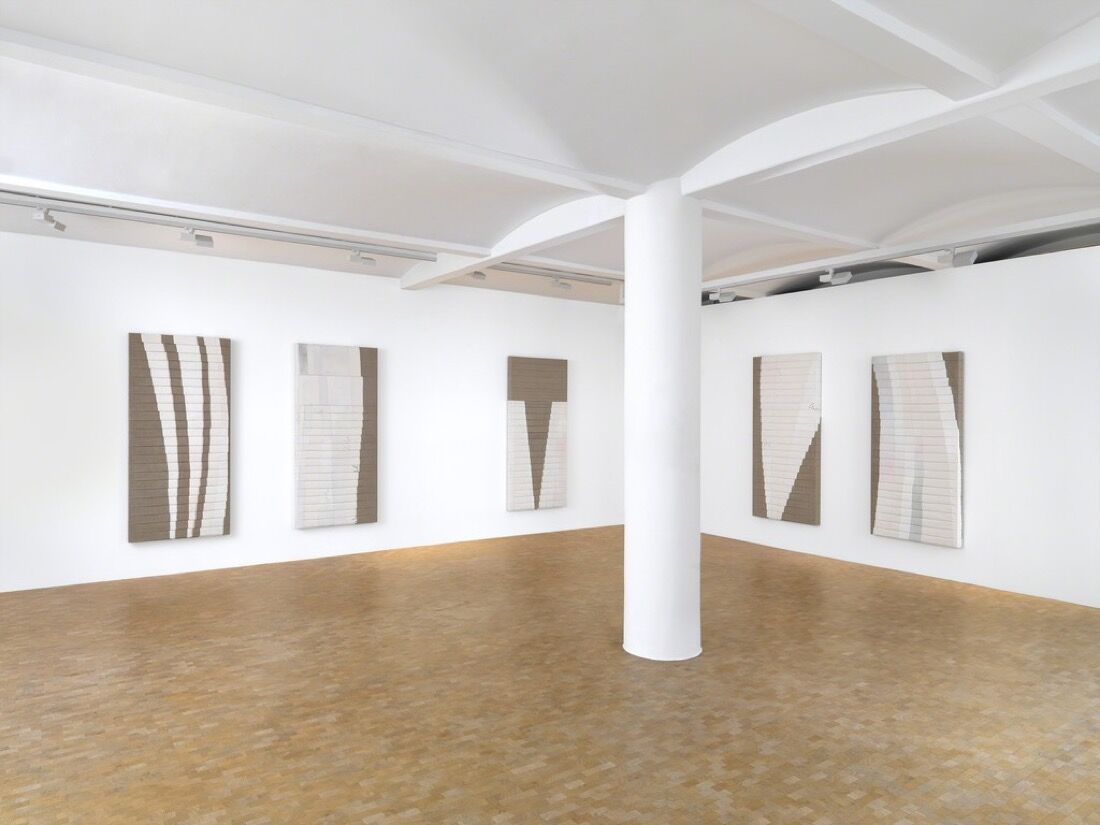 To create his minimalist constructions, Diiorio neatly folds swaths of raw linen or dyed canvas to create evenly pleated paintings that he attaches directly to wooden frames or stretcher bars. The folds create geometric patterns, shadows, and lines that become the subject of the work, bringing to mind one of the best essays on Stella ever published, “Frank Stella…and the Simulacrum,” written by esteemed abstract painter
Peter Halley
for Flash Art in 1986. Referring to the jogging, symmetrical lines of Stella’s shaped-canvas “Aluminum” paintings (ca. 1960), Halley writes that they “fill the space evenly and neutrally, becoming surrogates for activity in the painting and substitutes for painterly incident and imagery.” Diiorio’s folds, while entirely his own, function similarly, while also drawing attention to the construction of the work.

Lives and works in Berlin, Germany. 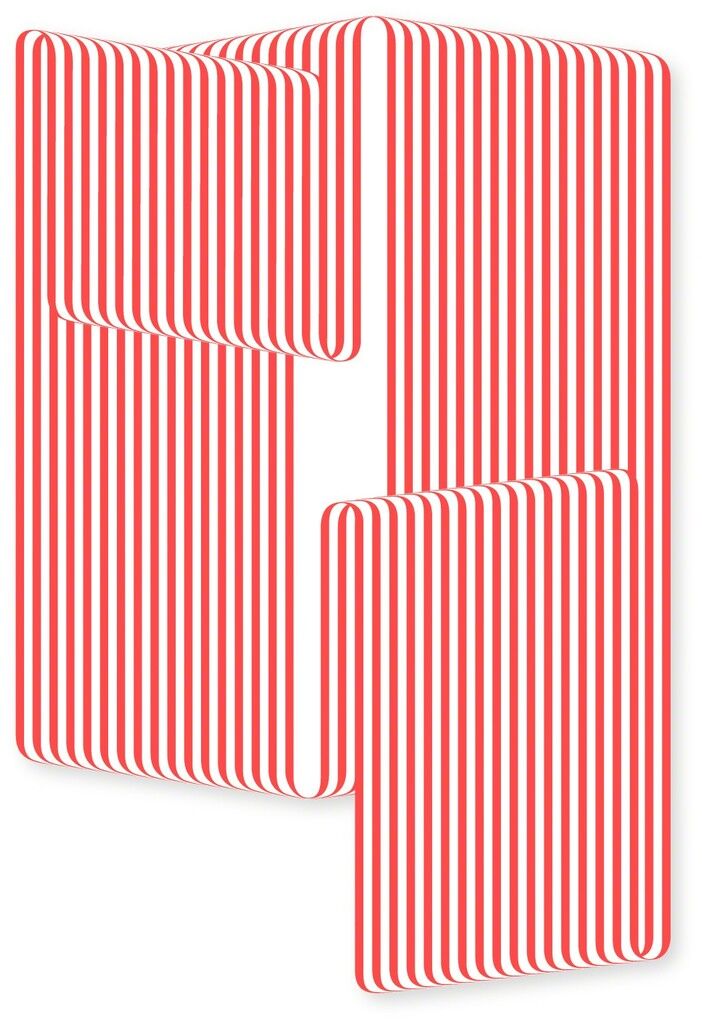 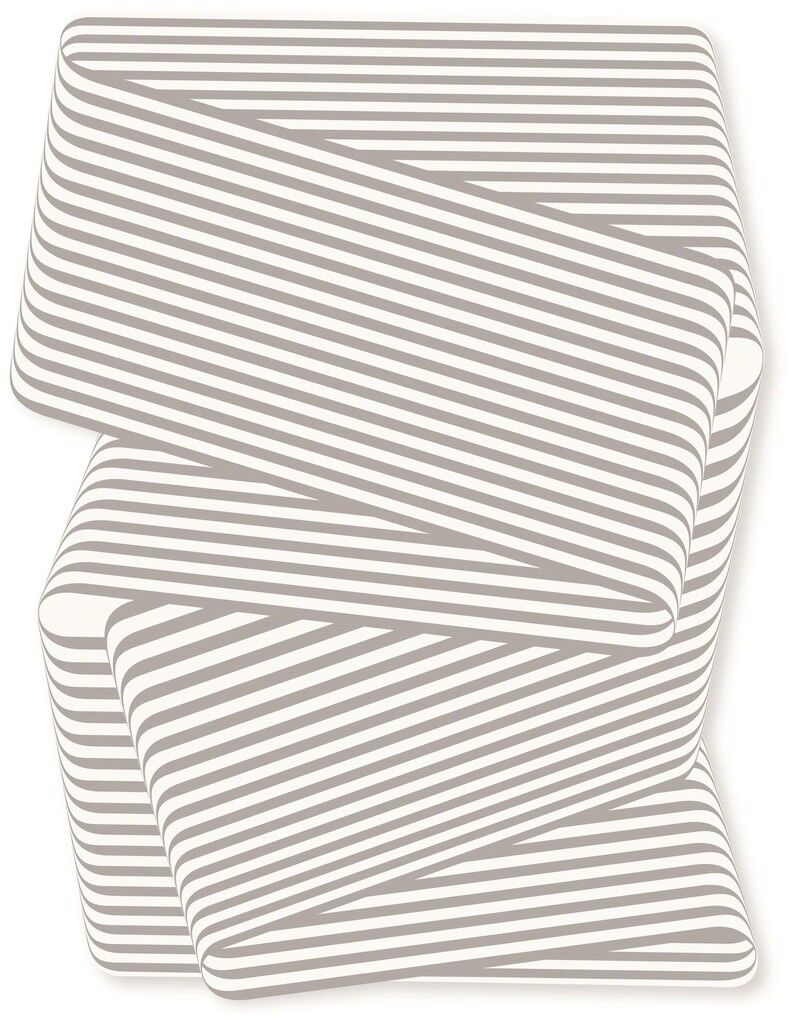 Terry Haggerty
EMBRACE, 2014
TWO x TWO
The shaped canvas was one of Stella’s boldest breakthroughs, and clearly one of the most influential. For Terry Haggerty, who refers to his works as reliefs, asymmetrically shaped aluminum panels provide a pristine surface on which to create what resemble flat ribbons of folding, curving, monochromatic lines. Wavering between two and three dimensions, and between
Minimalism
and
Op Art
, they feel object-like and yet light, recalling Stella’s own wall-mounted, metal sculptures jutting out from the wall. 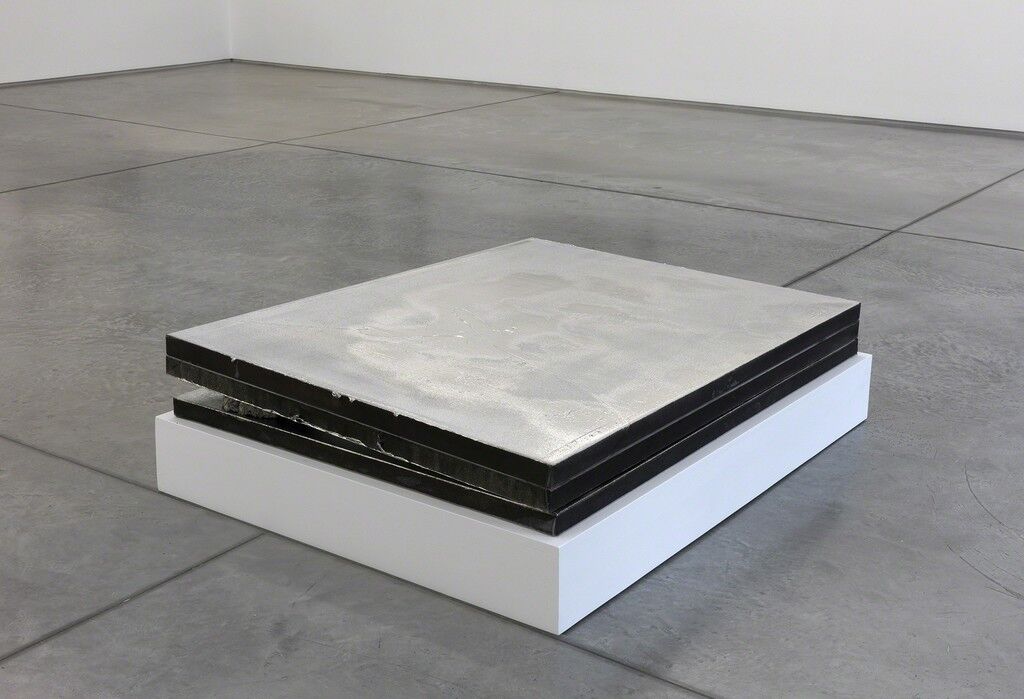 Jacob Kassay
Untitled, 2009
Collezione Maramotti
Would Kassay (or
Rudolf Stingel
, for that matter) ever have made shiny metallic paintings if Stella hadn’t first created his deliciously silvery “Aluminum” paintings in the early ’60s? Possibly. But one thing we know is that with Kassay—as with Stella—metallic feels more conceptual than decorative. (Kassay uses an electroplating technique to get those expansive, blurry mirrored surfaces, while Stella used industrial paint.) The contemporary artist’s cloudy surfaces have a richness and depth that seems somehow at odds with their reflectivity. Kassay has his own series of shaped canvases, too.

The radical “maximalism”—his word—of Stella’s wild, baroque, wall-mounted pieces continues to shock a certain sector of the public that has long worshipped him as the king of
Minimalism
. Working in her own maximalist style—layering the painterly and graphic, and mixing patterns, perspectives, gestures, and materials all over walls, floors, and objects—Cain similarly keeps on pushing the possibilities of abstraction. While her work obviously has little to do with Julian Schnabel’s ’80s
Neo-expressionism
, her work has the wild exuberance (held in tension with the compositions’ structures and balance) that artists like Schnabel saw in Stella decades ago.

Lives and works in Lausanne, Switzerland. 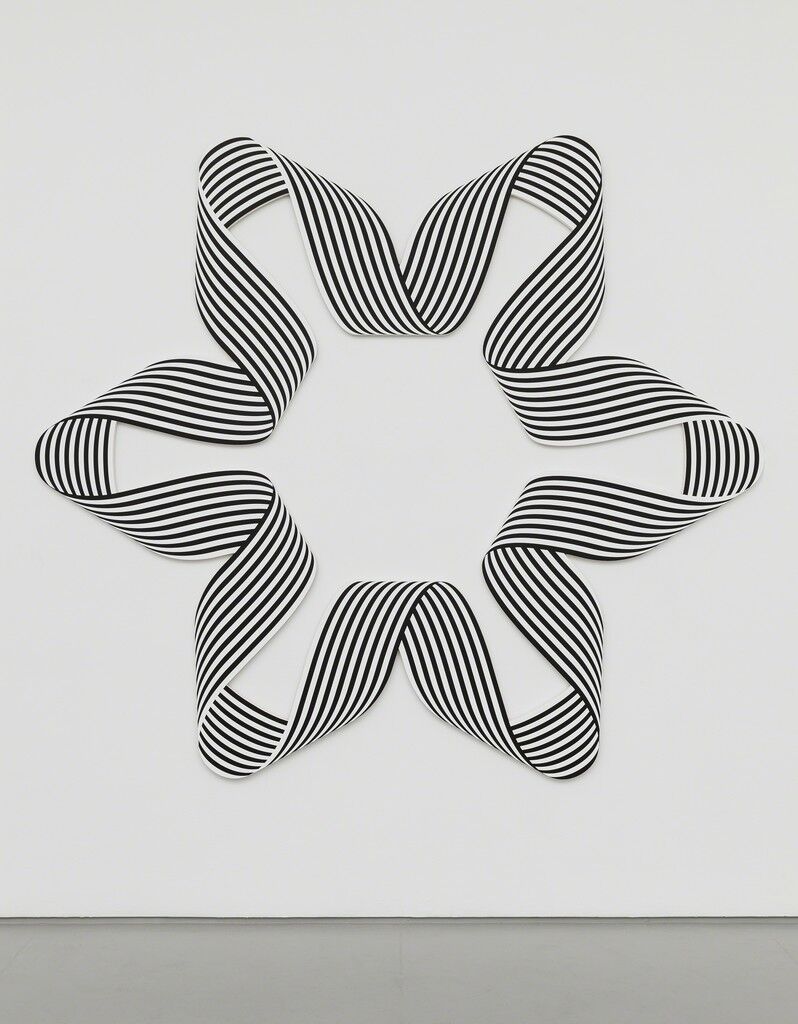 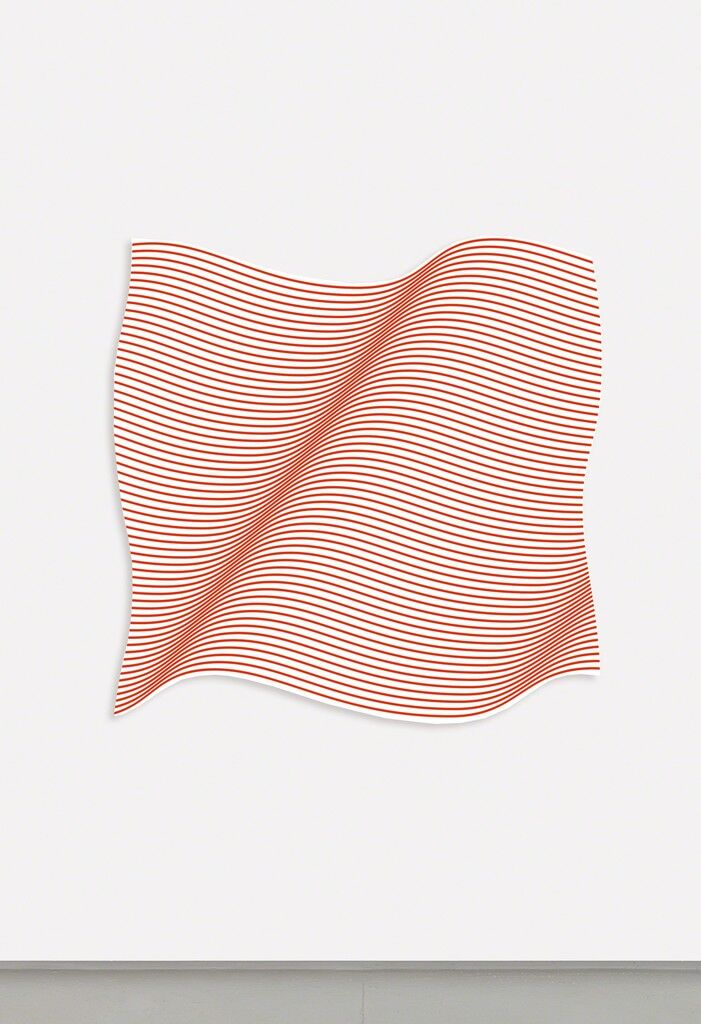 Philippe Decrauzat
Flag, 2015
Parra & Romero
Decrauzat’s perfectly regulated stripes might sooner recall
Daniel Buren
than Stella but, like both artists, they consider their relationship to their support—and sometimes that support changes shape, becoming wavy, for instance, thereby conditioning the way they appear. Decrauzat also draws from
Op Art
, visible in the way his rendering of shadows creates the illusion of three-dimensionality.
—Meredith Mendelsohn
“Frank Stella: A Retrospective” is on view at the Whitney Museum of American Art Oct. 30, 2015–Feb. 7, 2016.
Follow the Whitney Museum of American Art on Artsy.
Related Stories