How to Free Your Creative Spirit, According to Sister Corita Kent “If you have ever wished you could draw or paint or make things—if you have hopes of changing something for the better—this book might enable you to do just that,” wrote
Sister Corita Kent
in 1986.
Kent was a nun, an influential pop artist, and a famously charismatic professor at the small, Catholic liberal arts college Immaculate Heart in downtown Los Angeles from 1947 until 1968. She believed that everyone was an artist: “We can all talk, we can all write, and if the blocks are removed, we can all draw and paint and make things,” she wrote.
And it was through her vision, along with that of fellow teachers
Charles and Ray Eames
, that the school became an unlikely avant-garde art hotbed, where creatives from Alfred Hitchcock to
Buckminster Fuller
to
John Cage
mingled. There, Kent developed a radical and unprecedented curriculum designed to arouse and embolden her students’ creative spirits by looking at the everyday world in new ways. “Art does not come from thinking, but from responding,” she wrote. The curriculum would go on to become art-education gospel.
In 1979, many years after Kent stopped teaching and put religious life behind her, she began recording her renowned teachings with the help of artist and former student Jan Steward. She felt it was important that her lessons reach a wider audience. The resulting book, Learning by Heart: teachings to free the creative spirit, was published in 1992, six years after her death. 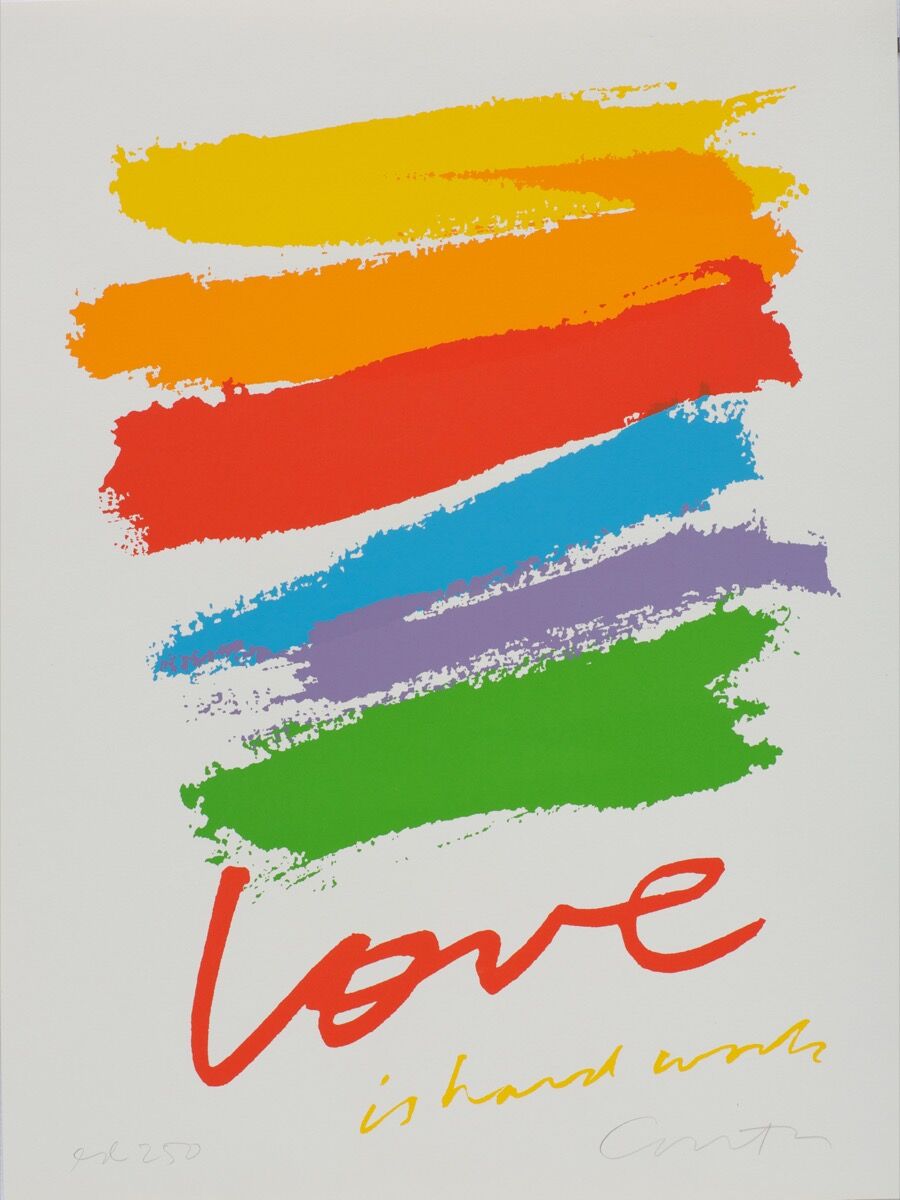 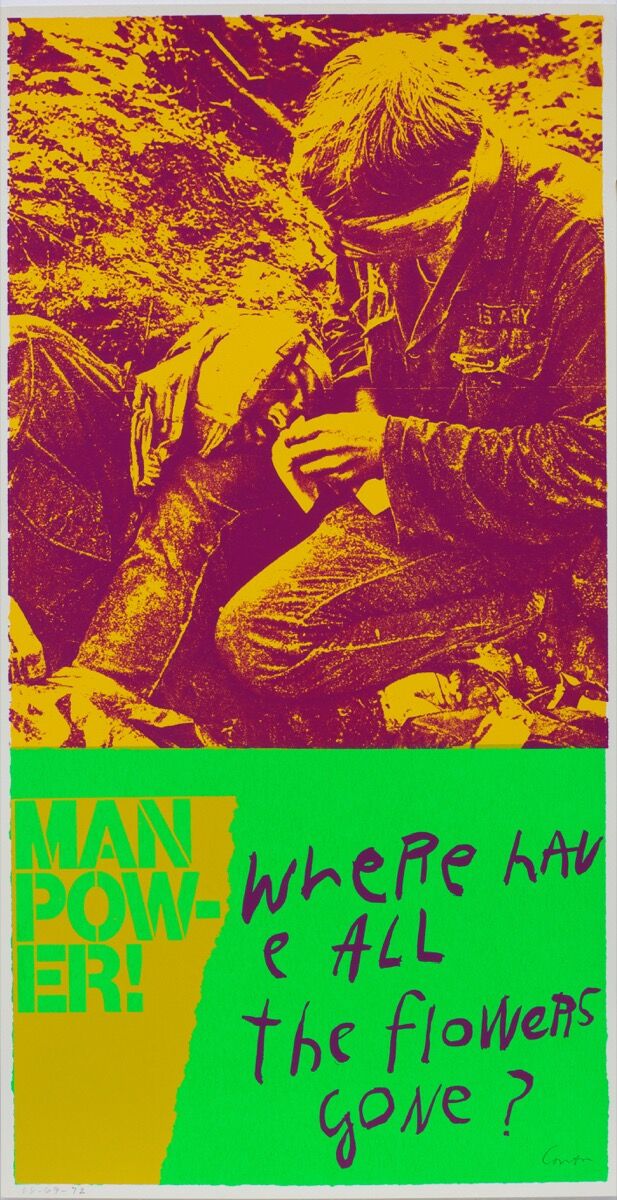 The little paperback overflows with Kent’s witty and persuasive axioms, which are followed by exercises that use the sights, sounds, objects, words, and people that saturate everyday life as the seeds for art-making. For many creatives, like
Aaron Rose
, the artist and filmmaker behind the cult documentary Beautiful Losers (2008) (who also made a short film about Kent), the book serves not only as a guiding light for his practice but “a manual for life.”
“I frequently open it randomly and read a section before I go to sleep,” he wrote, “and I find that upon waking I almost always see the world in a new light, full of beauty, inspiration, and wonder.” What follows is a distillation of some of her key lessons.

Befriend a child and see the world through her eyes

Kent begins her lessons by training the eye to discern the beauty and eccentricity embedded in mundane surroundings. The first chapter is devoted—simply but significantly—to “LOOKING.” She starts by conjuring the lofty ghost of her forebear
Matisse
: “Matisse said that to look at something as though you had never seen it requires great courage.” The passage gives way to a succession of exercises Kent crafted to unlock this fearless perspective.
One such exercise taps into the wide-eyed curiosity of kids. She encourages readers to “find a child,” preferably age two or three, and observe their “small journey” through a home that’s familiar to them. “It will be full of pauses, circling, touching, and picking up in order to smell, shake, taste, rub, and scrape,” she writes. 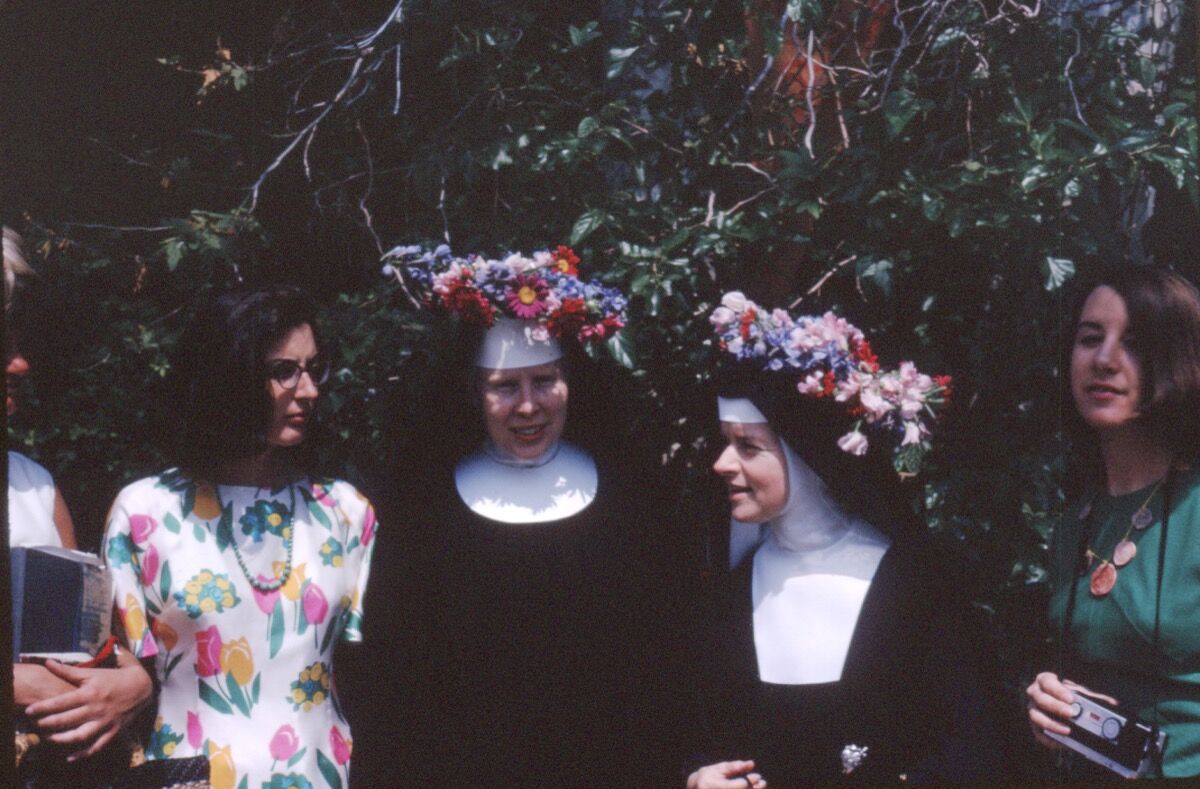 Advertisement
“It does not matter that this is all familiar territory—the same house, the same rug and chair. To the child, the journey of this particular day, with its special light and sound, has never been made before. So the child treats the situation with the open curiosity and attention it deserves,” she continues. “The child is quite right.”
Other assignments instruct us to look long and hard at shadows cast by familiar spaces and forms: “After about five minutes you will probably think you’ve seen everything. But then after 15 or maybe 27 or maybe 58 minutes, it’s like an explosion and you see thousands of things you never knew were there.”

Create a simple tool to help you study the world

Kent encouraged all of her students to carry a “finder,” or a piece of cardboard with a rectangular hole cut into it. The inexpensive tool, which can be made by anyone with cheap and accessible materials, acts like a lens to home in on specific facets of a given environment. “You can then view life without being distracted by content,” the book explains. “You can make visual decisions—in fact, they are made for you.”
The finder became integral to Kent’s curriculum, inspiring the close study of objects—like cars—that might normally be passed without consideration of their aesthetic value. “Any car becomes a thing of beauty when viewed through a finder,” reads one prompt. “View the facade of the nearest building through the finder and isolate 10 details to draw on the spot,” instructs another.

Use objects, people, and events as your starting point

Kent believed that anything in the world, no matter how banal, could double as a deep, abundant well of creativity. “Anything that comes your way, including the work of artists, is a place for starting,” she wrote.
For her own text-based paintings and serigraphs, Kent drew from sources as wide-ranging as The Beatles, The Bible, Gertrude Stein, Martin Luther King Jr., folk art, clouds, and discussions with friends. She encouraged her students to do the same.
One assignment coaxes readers to track the growth and decline of a garden dandelion through a series of drawings. “Wait a few more days and draw it in full bloom. Wait a few more days and draw it when it begins to wilt. When it develops its downy crown, draw it again. The source is the same but has made many changes,” the book notes. “Never think of a source as being static.”
Kent also stressed the existence of intangible and invisible sources. Problems, questions, and misunderstandings are cited as generative fodder, too. 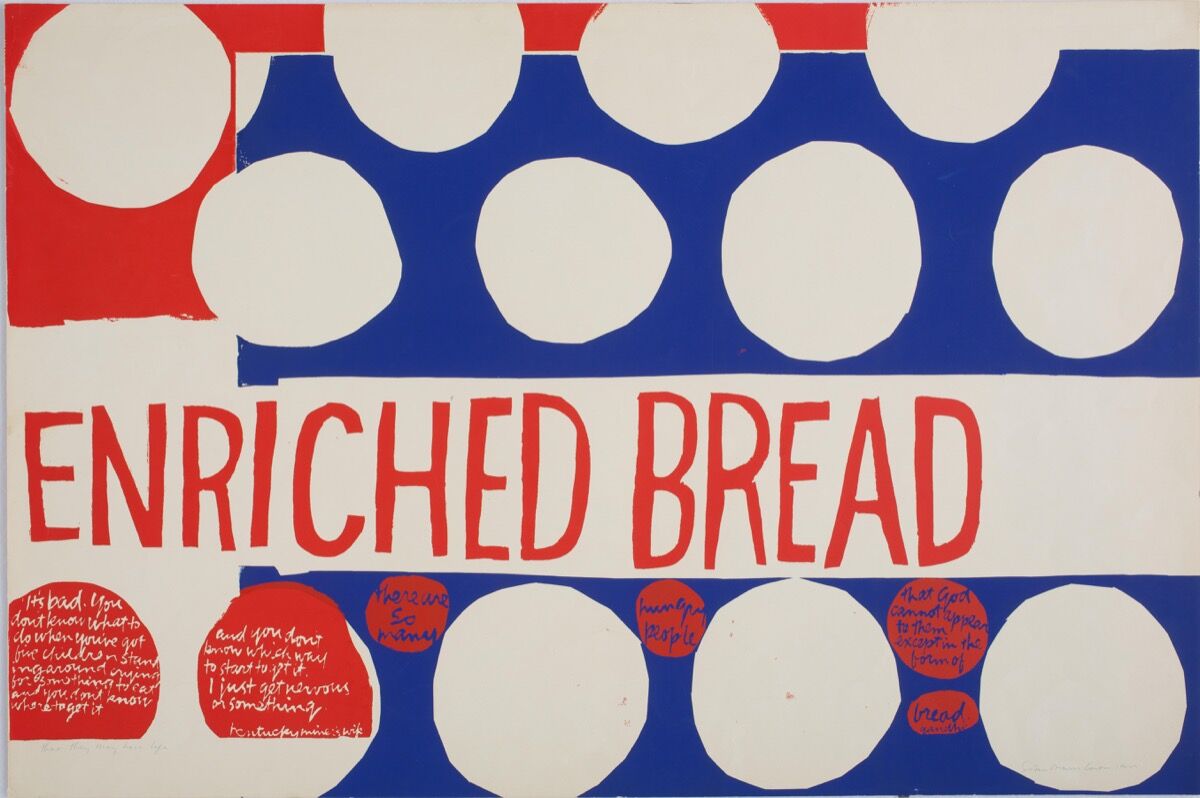 Corita Kent, that they may have life, 1964. Courtesy of the Corita Art Center. Photo by Arthur Evans.

Make time for “plorking” to expel self-consciousness and spark creativity

Kent also acknowledged the challenges posed by creative block, and proposed one main solution: play. When you are faced with a blank, “Go to a movie, take a walk, read a book for fun,” she writes. “Sometimes these experiences will spark an idea or memory or thought, so that the fun times prove to be marvelous resources-research.”
Play meant more than leisure to Kent, though. In fact, she created a new word that encapsulated her view of play as a creative catalyst. “We tend to think of play as abstract, without a goal, and somewhat irresponsible—while work suggests a goal, is specific, and honorable,” she noted. “Plork” was the funny portmanteau she invented to combine two concepts in hopes of recognizing “them together as one responsible act necessary for human advancement.”
Kent crafted numerous exercises that would encourage “plorking,” and in turn transform creative block back into creative flow. “One way to start working is to put something, anything, on paper and then do it over and over,” she suggests. “This can relax you and allow greater freedom because you are less critical.” 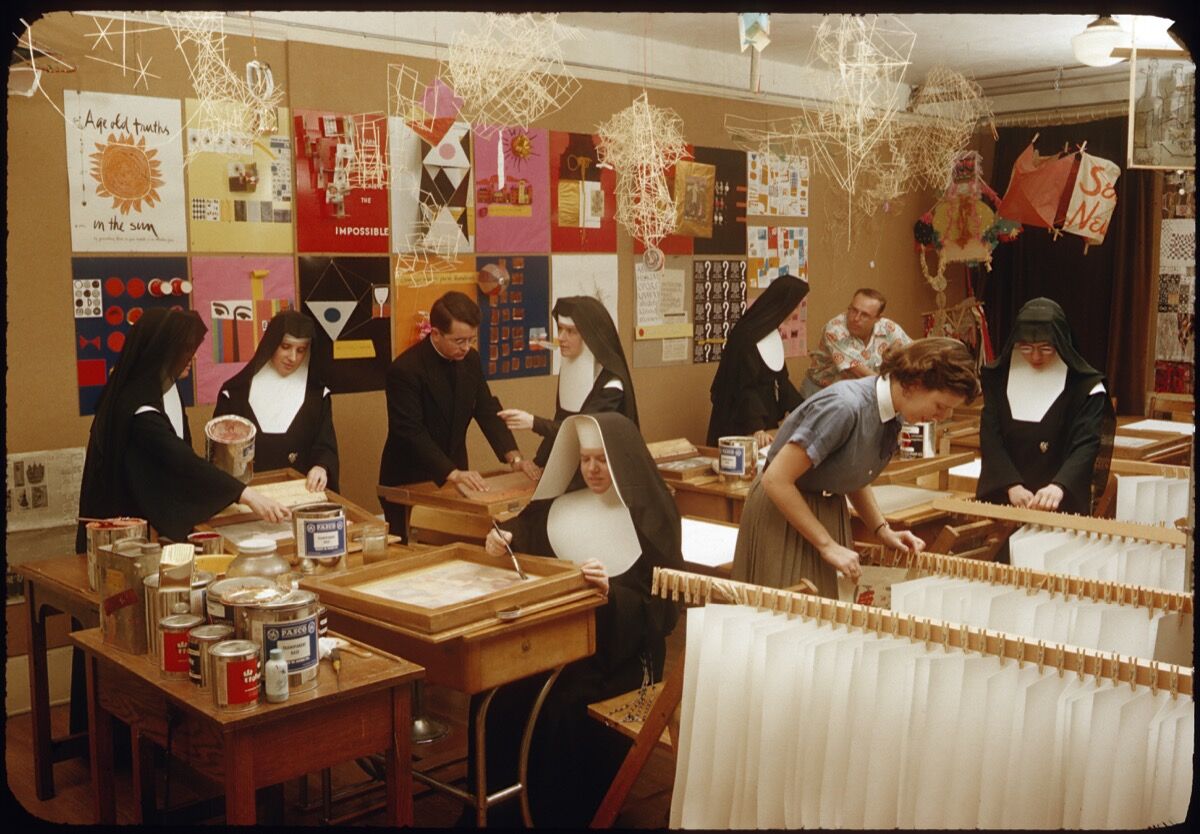 The book’s most concise assignment reads: “Make a toy. Make it something you want to play with—just to please you.” The instruction embodies Kent’s approach to both art making and education: if you are able to find joy and beauty in the everyday world, the creative spirit will be freed and art will flow.
“Playing allows you to slip into working, from which you can easily slip back into playing,” she wrote. “Then come those marvelous and rewarding moments when you are making and you are not conscious of thought or anything outside.”
Alexxa Gotthardt
Related Stories