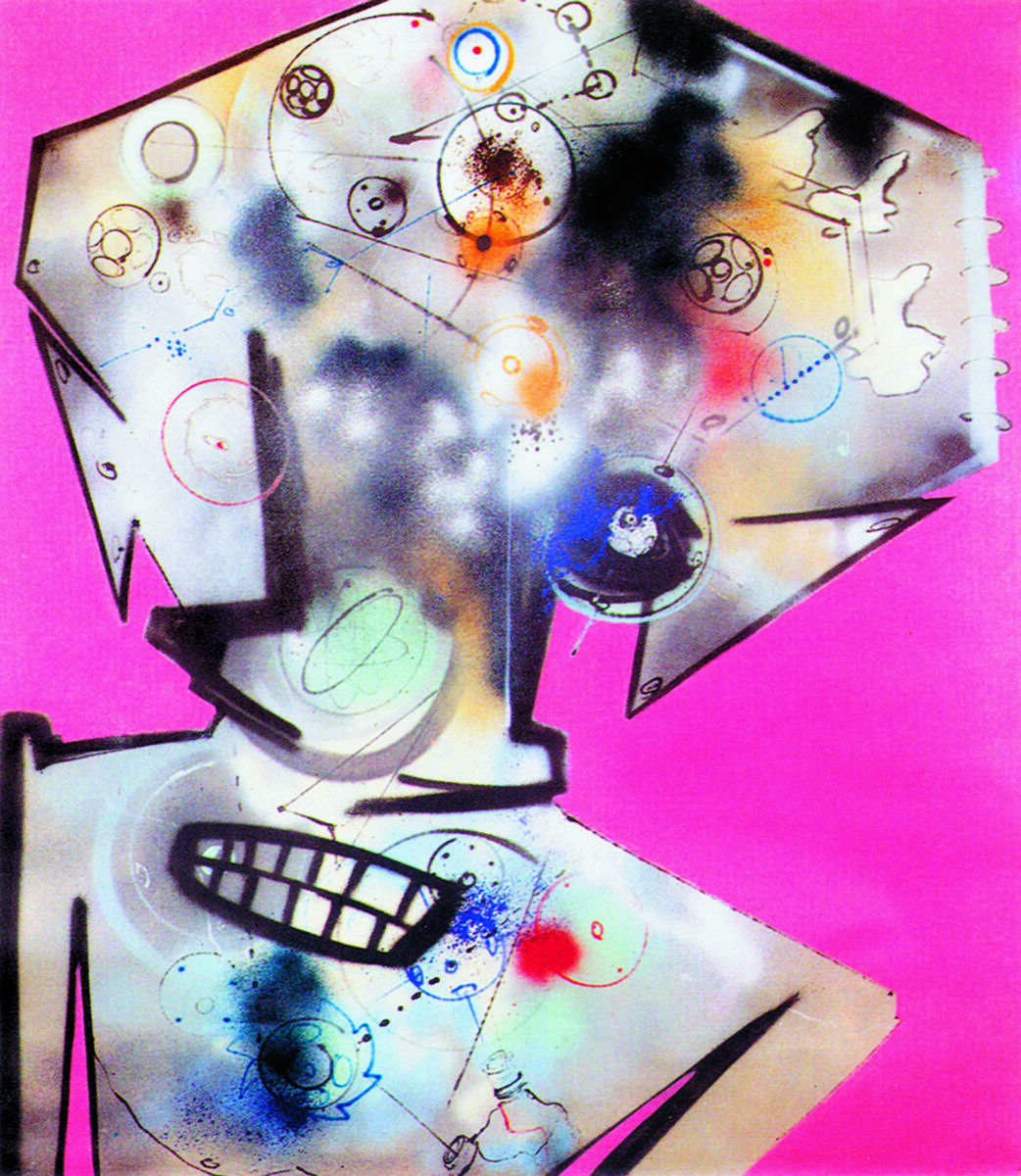 Futura, Autoportrait, n.d. Courtesy of the agnès b. Collection. 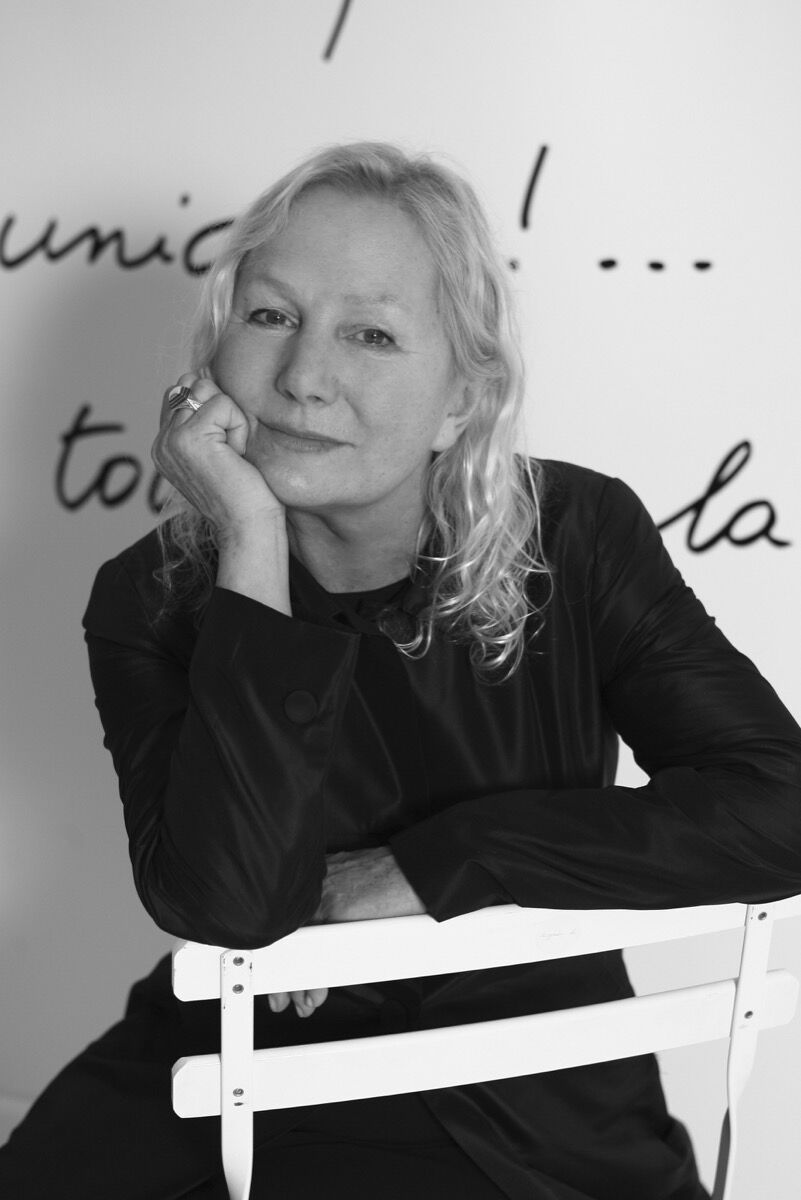 Portrait of agnès b. by Kazou Ohishi. Courtesy of the agnès b. Collection.

agnès b.
, born Agnès Andrée Marguerite Troublé, may have conquered the globe with her eponymous clothing label, which offers timeless wardrobe staples symbolizing understated Parisian chic. But her first love was art. Gifted with a talent for drawing, she attended some classes at the School of Fine Arts in Versailles, then the École du Louvre in Paris, in the hopes of becoming a museum curator.
“I studied art, so I think I learned how to look at things,” she said. “My father took me to Florence when I was 12. I was so fond of
Botticelli
,
Leonardo da Vinci
, and the Medicis.” At age 17, she became an intern at Galerie Jean Fournier in Paris and worked on the catalogue raisonné of painter
Simon Hantaï
’s oeuvre. That same year, she married Christian Bourgois, who later became a famed publisher, and gave birth to twins. When they divorced, she was broke and entered the fashion world by chance, landing a role as a junior fashion editor at Elle magazine. She set aside her artistic pursuits for two decades. 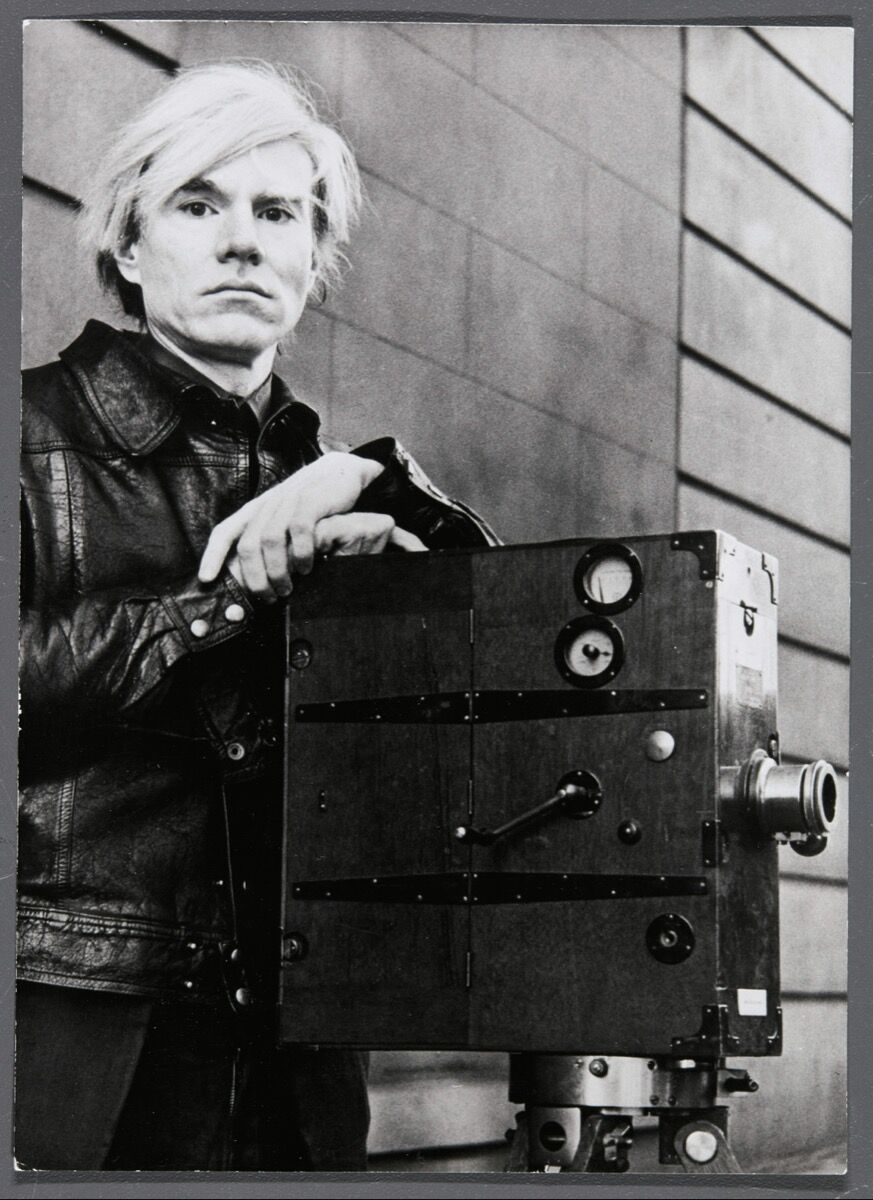 Andy Warhol, Self Portrait (Andy Warhol with film camera taken during the heyday of his Factory films), 1977. Courtesy of the Agnès b. Collection. 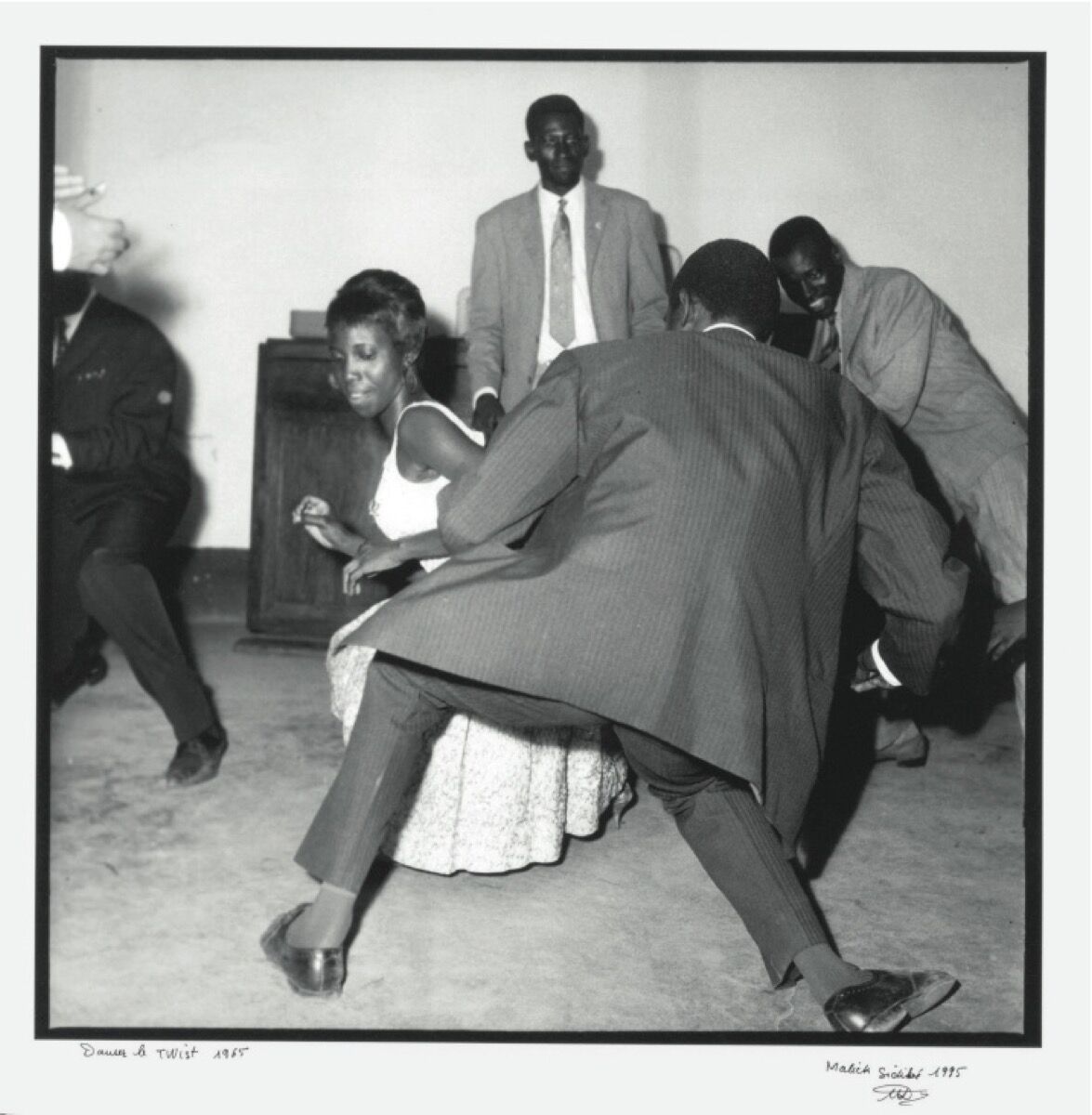 Today, as an entrepreneur, stylist, philanthropist, gallerist, and art collector, agnès b. surrounds herself with art, whether in her Parisian headquarters or her country house near Versailles, where she was born in 1941. Her collection of over 5,000 paintings, sculptures, drawings, installations, videos, and soundworks is expansive—she has pieces by famous figures including
Andy Warhol
,
Damien Hirst
,
Brassaï
,
Keith Haring
,
Diane Arbus
,
Robert Mapplethorpe
,
Louise Bourgeois
,
David Lynch
,
Malick Sidibé
,
Tracey Emin
,
Wang Du
, and
Robert Rauschenberg
.
But one of her most ardent loves has been street art. Extremely fond of the scenes in Paris and New York and of photography, she has taken black-and-white photos with her Nikon film camera of graffiti tags for over 30 years. “I’m very sensitive to this form of expression because I think it’s a story from the prehistoric Lascaux cave. It’s a need for people to express themselves,” she said. “I love it because it’s so furtive and very often anonymous.” 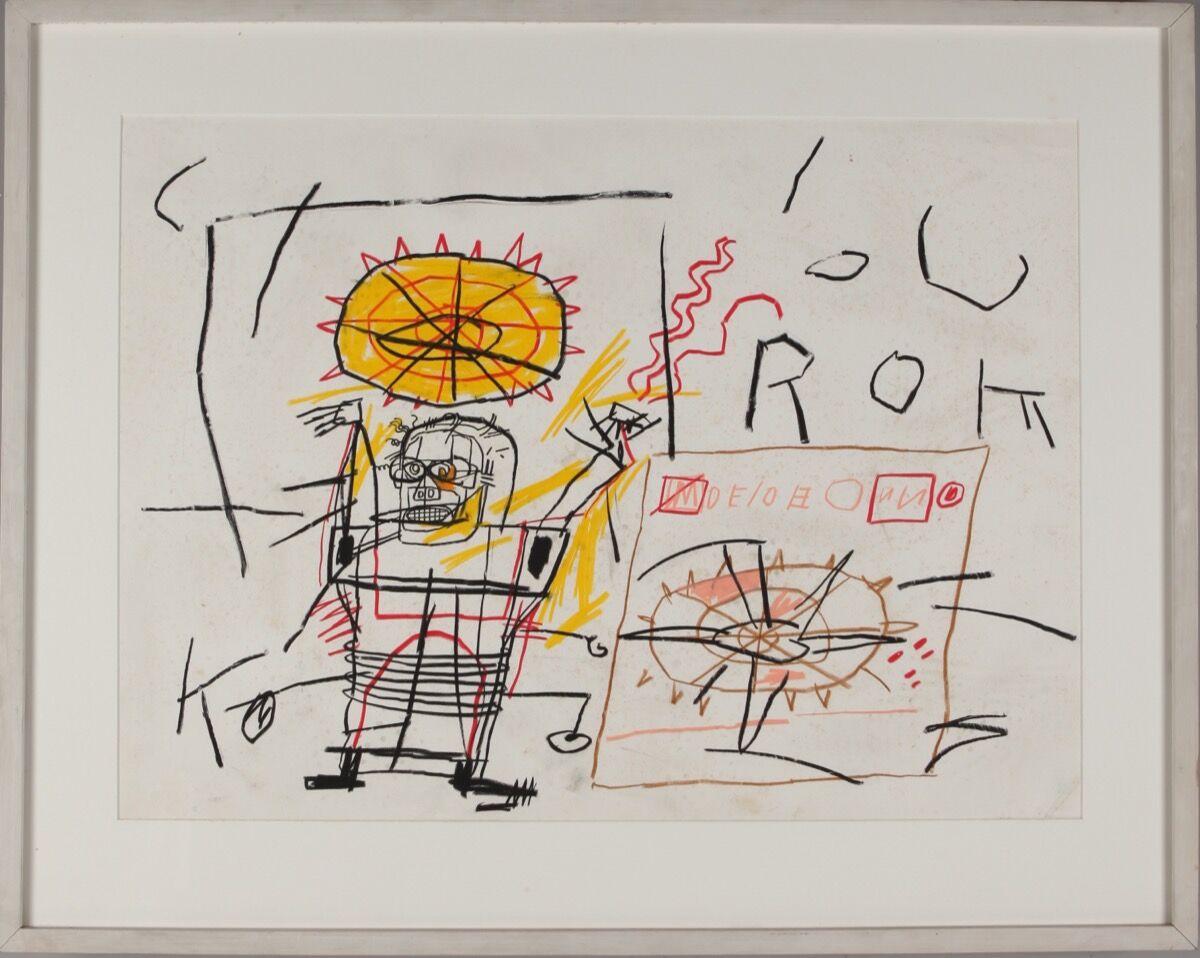 Jean-Michel Basquiat, Untitled, 1982. Courtesy of the agnès b. Collection.

Advertisement
agnès b.’s collection is a portrait of the stylist herself, a diary of her life, marked by openness, curiosity, and generosity. Much of her collection can be linked to personal stories with the artists. She met
Jean-Michel Basquiat
in 1988 in Paris several months before his death, before he was well known in France. “I saw one of his paintings at the Paris Biennale in ’85 and asked a friend of mine who was living in New York, Philippe Briet, to go to his atelier. It’s still in my home. I love it very much,” she recalled. “I met him at his Yvon Lambert show. He called to me from the next-door pizzeria and we talked for two hours. I had a great meeting with him.”
agnès b. opened her first boutique in 1975 in Paris, followed by an art gallery, Galerie du Jour, on the same street nine years later. Just last year, she united her permanent collection exhibition space, commercial gallery, art bookstore, and offices in a new 15,000-square-foot building known as La Fab. Located close to the Seine, within a social housing complex in Paris’s 13th arrondissement, La Fab. is intentionally distanced from the capital’s important art districts to reach new audiences from all walks of life. According to agnès b., La Fab. receives no governmental financing or tax deductions. “My vision for La Fab. is to share,” she said. “I think rich people should share, and I share a lot. I don’t have a lawyer to try to pay less taxes.” 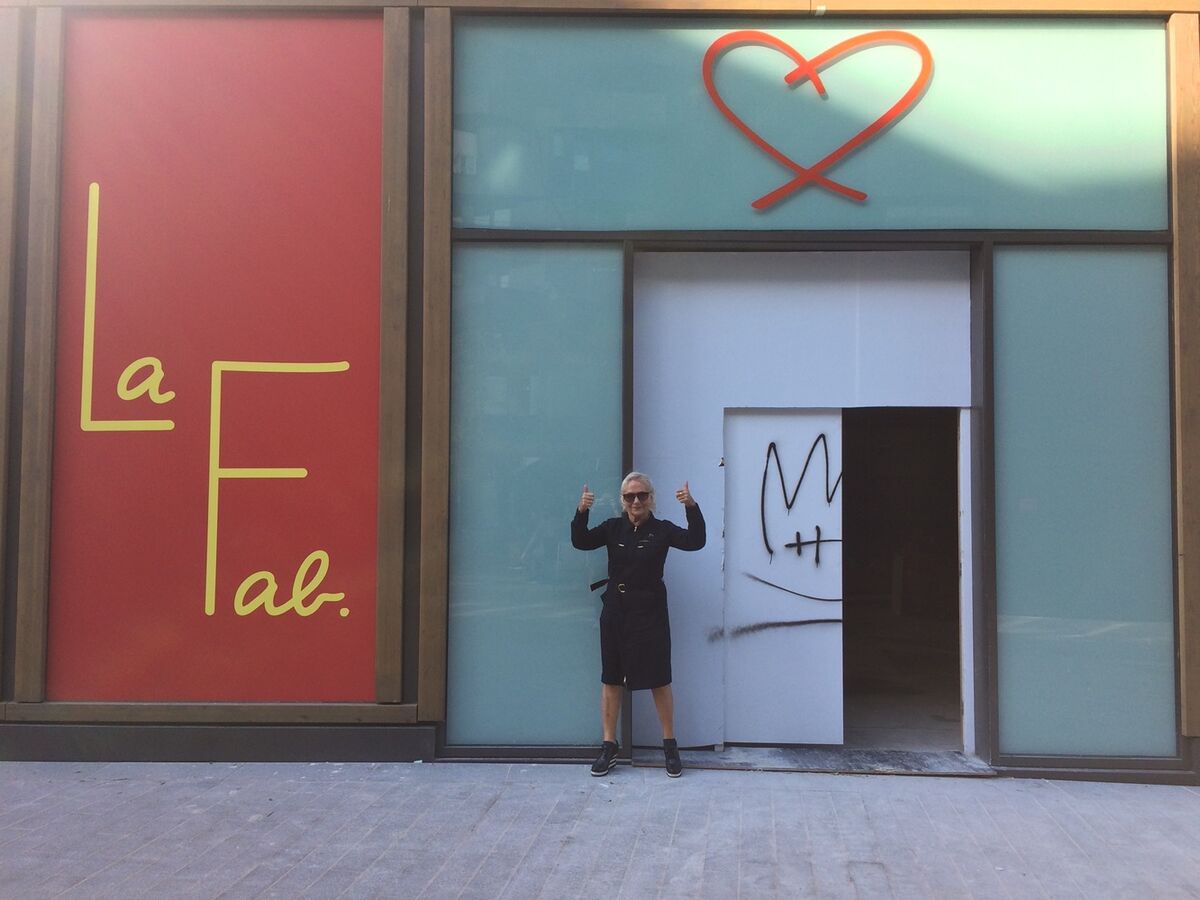 Portrait of agnès b. Courtesy of La Fab.

When agnès b. first began acquiring art in the 1980s, she said she was “not even aware” she was beginning a collection. “I have learned with time, and I’m very rarely disappointed by the artists I collect as time passes,” she said. Somewhat of a rebel, agnès b. is indifferent to trends and frontiers. Fashion trends do not interest her, only style, she says. And despite her bourgeois roots, she has always embraced the countercultural and has been politically active in reaction to her conservative, Catholic, and right-wing upbringing.
Since the first exhibition of the agnès b. collection in Burgundy in 1992, she has held no fewer than 13 shows, and makes it a point to personally curate all of them at La Fab. The first piece in her collection was Empreinte (1963), offered to her by Italian artist
Antonio Recalcati
in the 1960s; the work is an imprint of his face pressed against the canvas, and covered in black paint. Her latest acquisition was
Stephanie Pfriender Stylander
’s Keith Richards, The Third Eye (1993), purchased from Galerie Sophie Scheidecker at the recent Paris Photo fair. 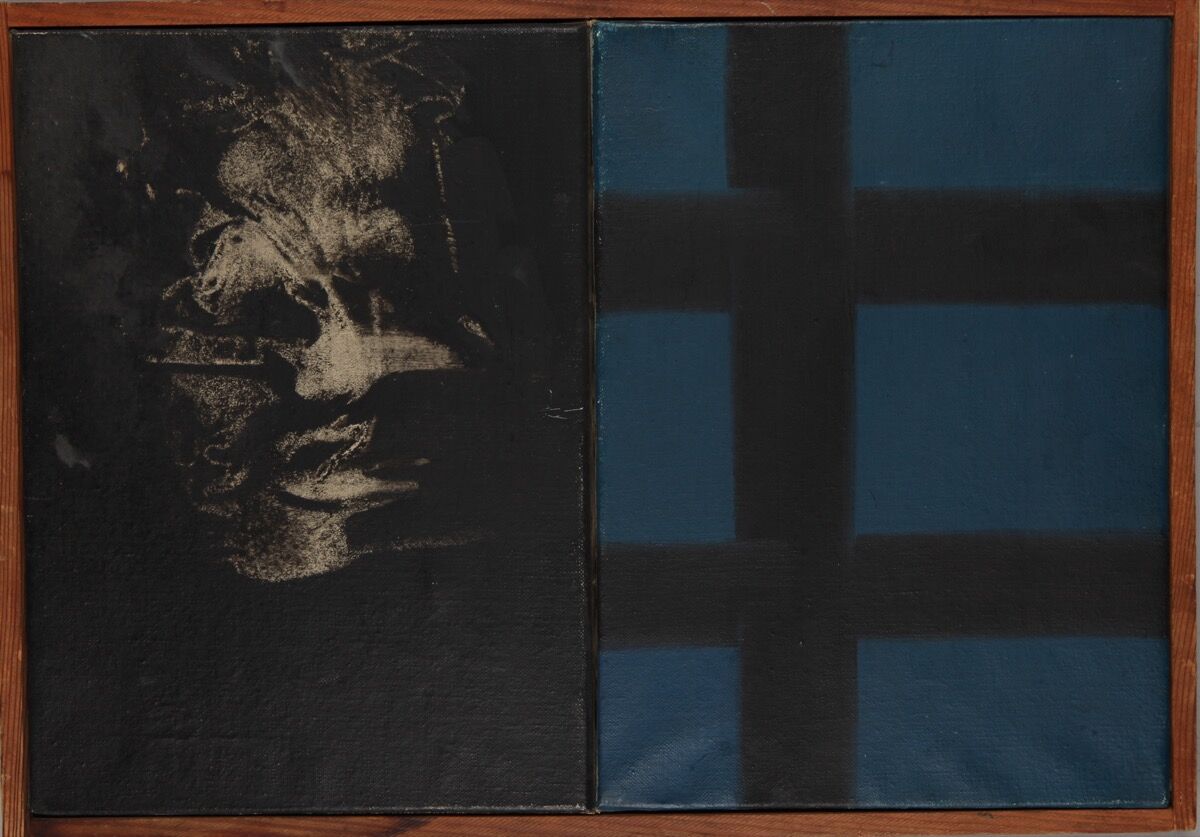 Antonio Recalcati, Empreinte, 1963. Courtesy of the agnès b. Collection.

“I like quality, not specialty,” she said. “I like something that jumps to my eyes and my heart for different reasons. I have confidence in my tastes, but it took time.”
Always on the lookout for new talent, agnès b. enjoys purchasing art by rising stars before they become blue-chip names. She said she was the first to show the photographers
Martin Parr
and
Nan Goldin
in Paris, representing them in the early 1990s, as well as
Ryan McGinley
and the painter
Claire Tabouret
. The collector said she is not market-oriented and has never sold any of the works she has acquired. “What matters to me is the power of a piece of work—its beauty, not its value,” she said. “I’m very instinctive. I don’t buy for any other reason than loving the piece…I prefer to buy pieces from young people who need to sell, to be discovered, and to be shown. It’s a way to encourage them to continue.” 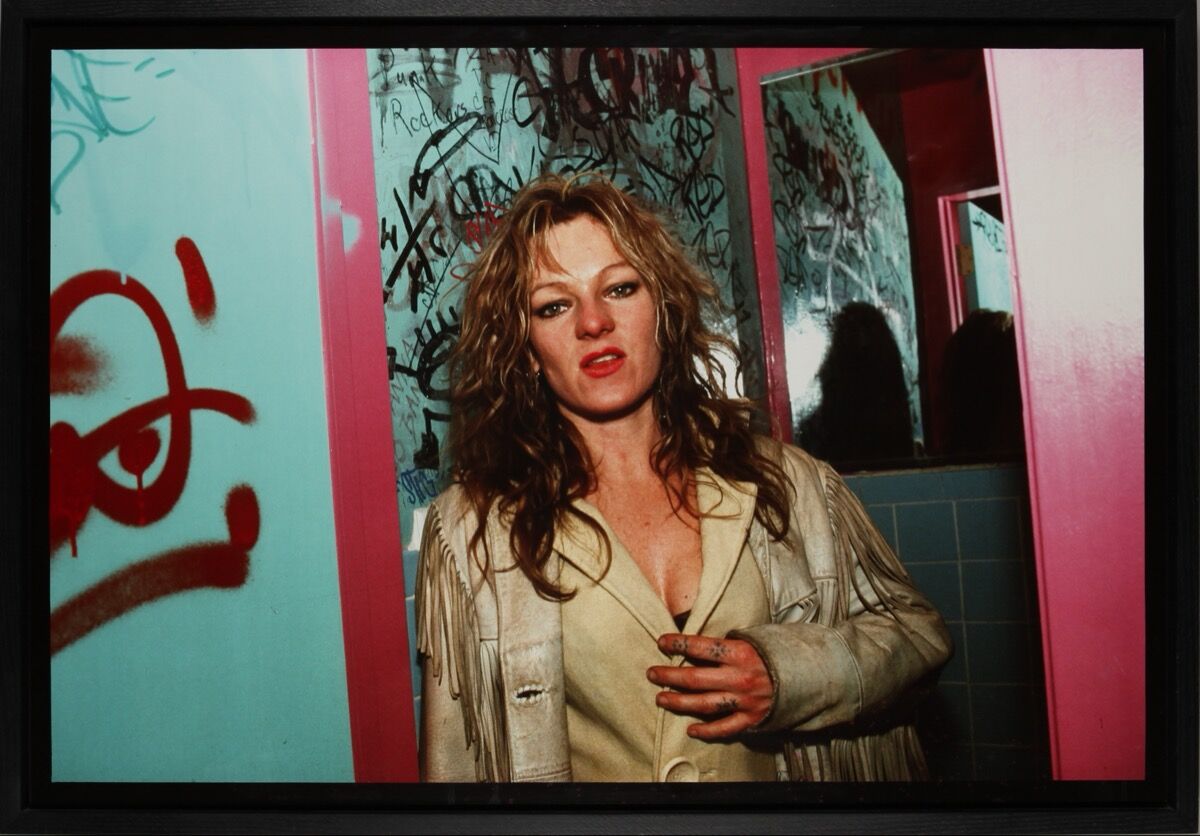 Supporting the New York street artist
Futura
since 1989, agnès b. just closed a solo show dedicated to his works in her collection, organized by La Fab at the agnes b. headquarters in Paris. Futura said he is lucky to have met her when he did. “She helped me enormously by investing in works, which allowed me to continue painting,” he explained. “At that stage in my life, I wasn’t totally focused on art, and she helped me to keep on in that direction. She helped me with a studio and made life easier for me in Paris.” He added: “Without agnès, lots of things currently happening in the movement in Paris would not be taking place.”
La Fab.’s fall programming is dedicated to graffiti and agnès b.’s historical relationship with this movement since 1985, which testifies to urban art’s evolution and currents. In her collection, we find the likes of
Banksy
,
Shepard Fairey
,
Raymond Hains
,
L’Atlas
,
Lek
,
Sowat
,
Tanc
, and
Gérard Zlotykamien
. “What is important to me and what I keep saying is that graffiti is not pollution,” agnès b. said. “On the contrary, it is a rich art—something that embellishes life, that beautifies the city.” 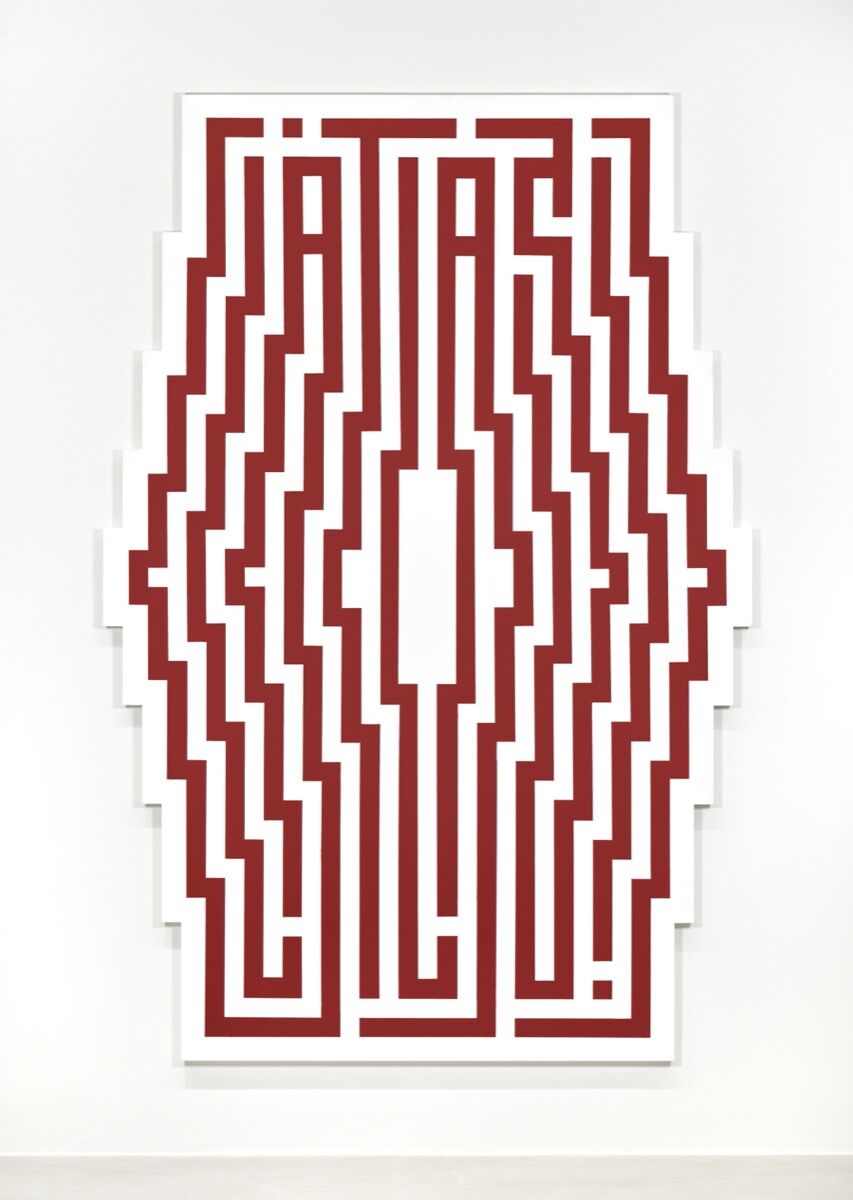 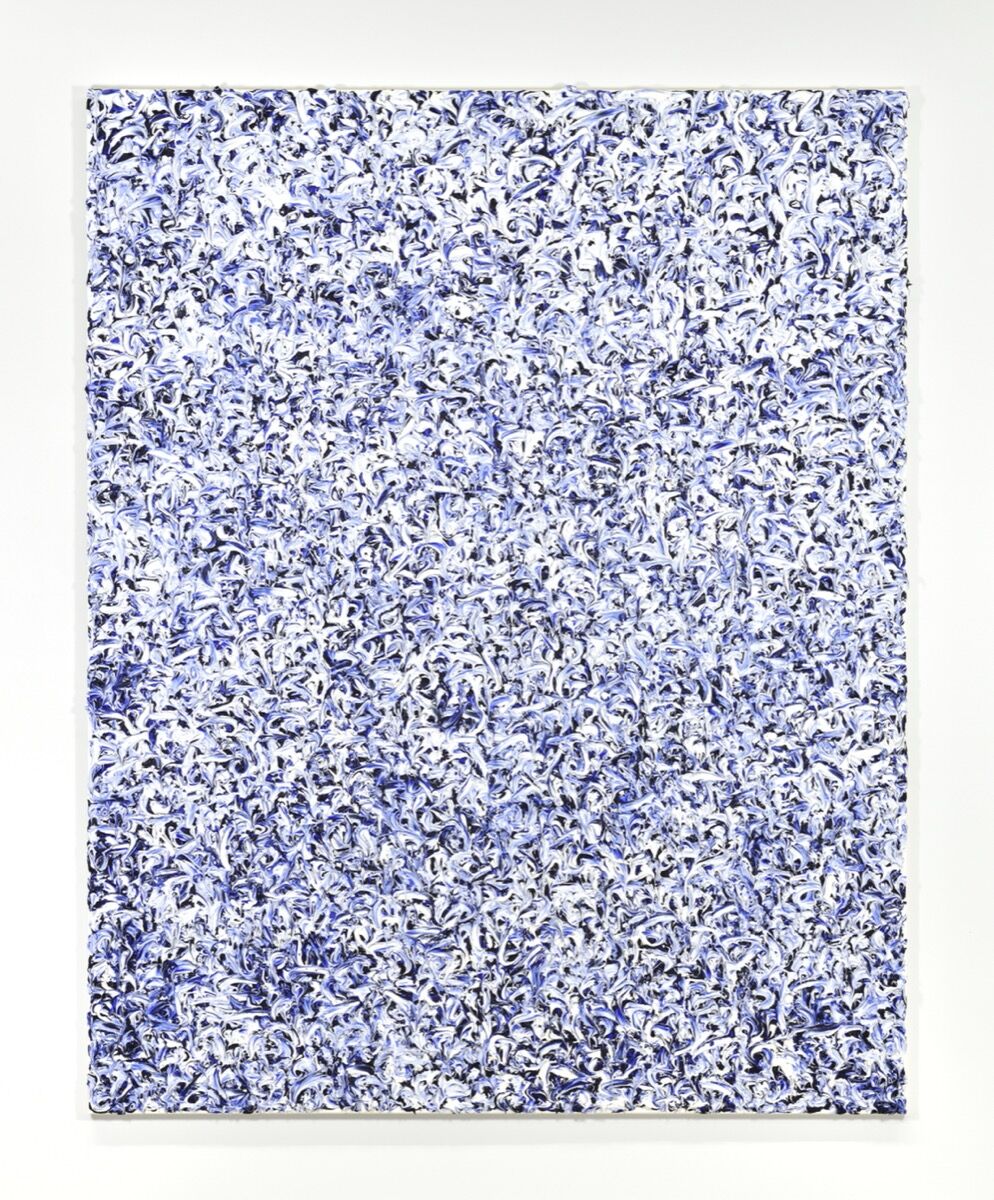 The graffiti artist
JonOne
wrote in the Collection agnès b. book that she was one of the earliest Parisian collectors who supported street art. “Very few went further than talk. She had shows in her gallery when other galleries were too snobbish to consider our work as art,” he wrote. “I will always remember agnès as being the first to climb over fences to see our latest walls hidden in vacant lots or along railroad tracks.…She is one of us.”
Since launching Galerie du Jour, agnès b. has also invited artists she spots on the street to display their creations, such as Brooklyn-based urban artists
Bäst
,
Jim Joe
, and
FAILE
, or Parisian art collective Frères Ripoulin, who pasted their works over advertising posters in the metro.
L’Atlas had a turning point in his career when he tagged one of agnès b.’s delivery trucks in 1998. She asked him to participate in a group street art show, “Graffs,” at Galerie du Jour three years later, alongside 16 other graffiti artists including
André Saraiva
,
A-One
, Futura,
Invader
, JonOne,
Mist
,
O’Clock
, and
Osgemeos
. It was a groundbreaking moment in the history of graffiti because it proposed a vision of street art as a major international art movement happening before our very eyes. 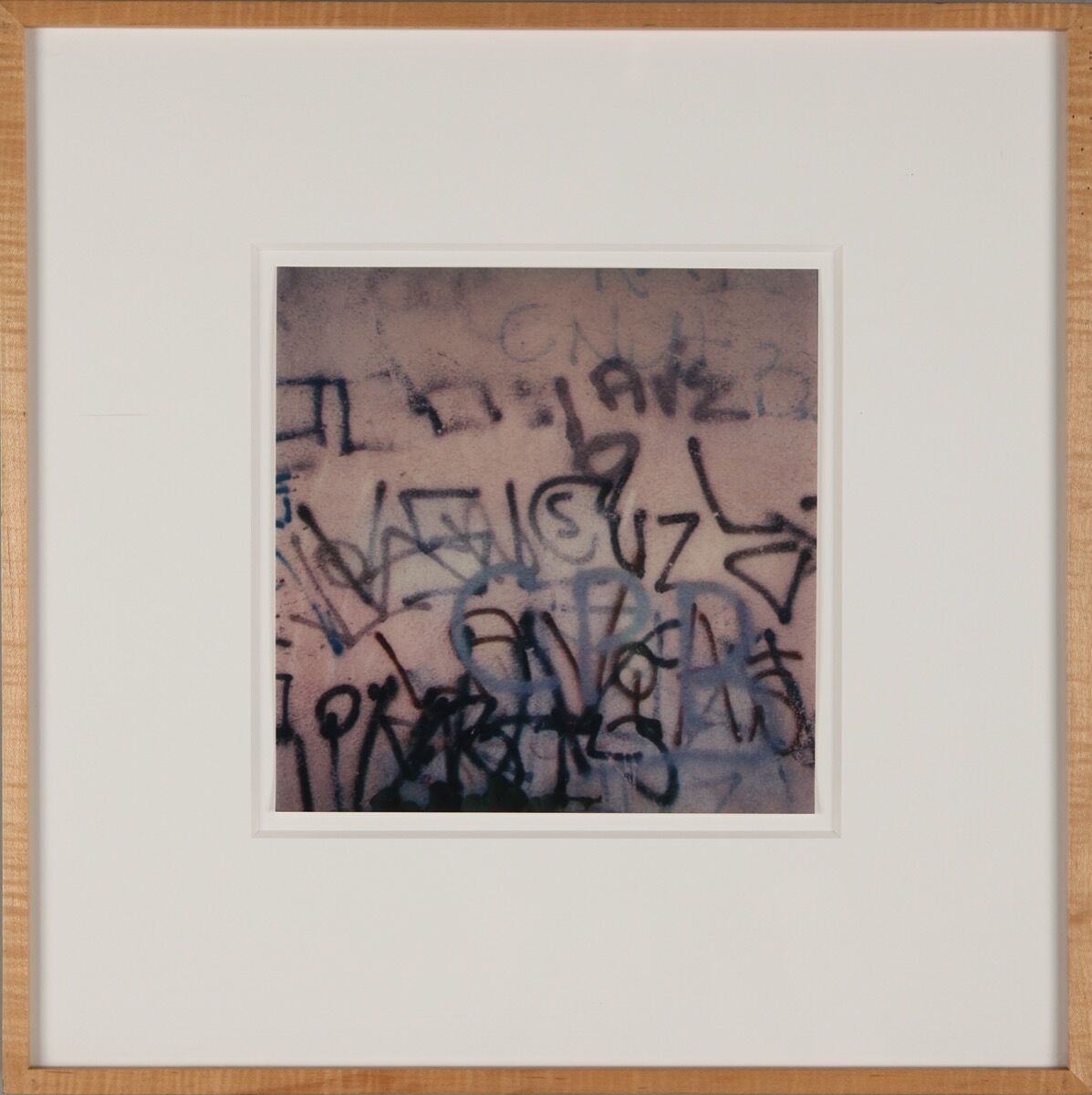 Dennis Hopper, Untitled, 1990. Courtesy of the agnès b. Collection. 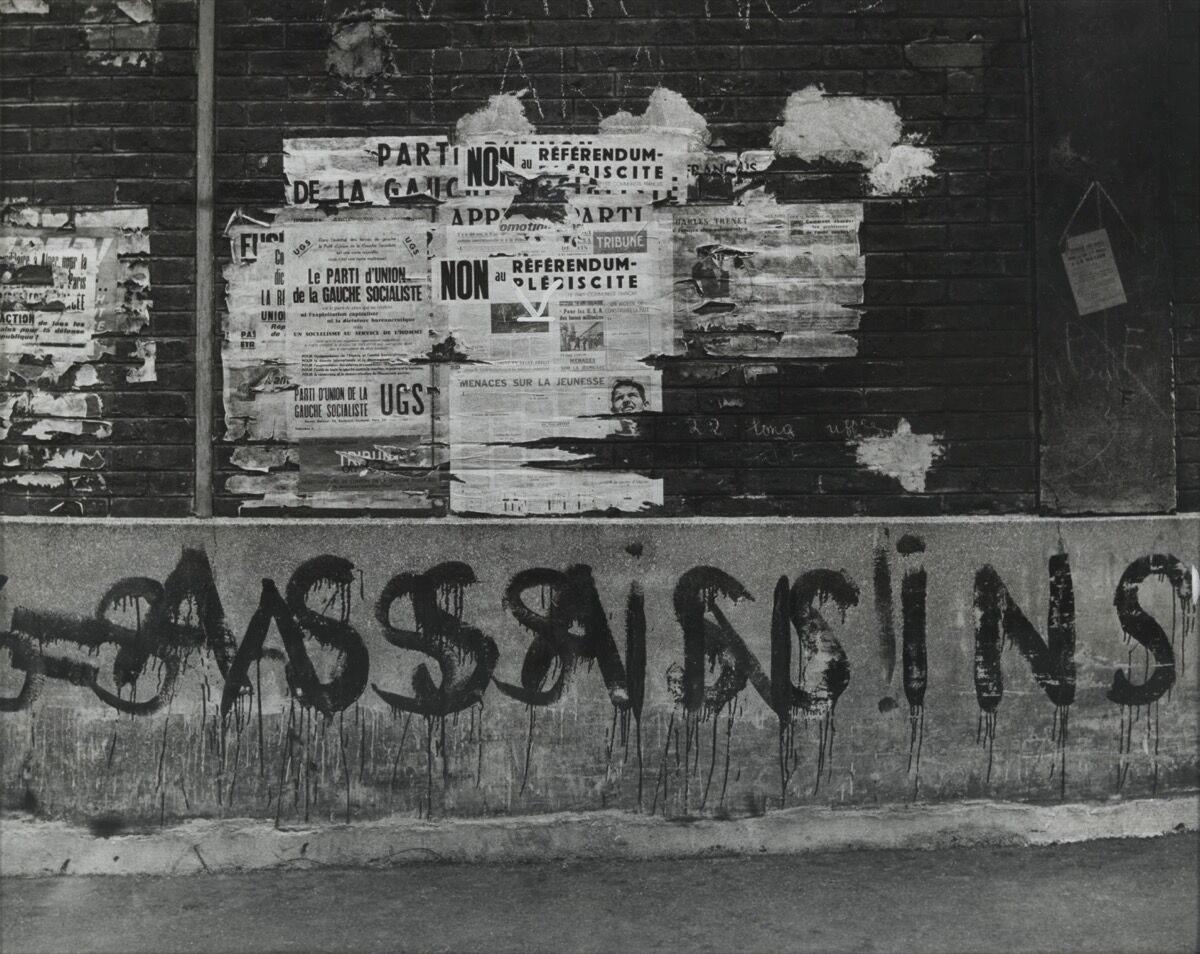 Before then, L’Atlas had never produced studio work or exhibited in an art gallery. “All of a sudden, being with agnès, you felt the power and openness of spirit, openness to the world,” he said. “She’s an art patron, and when she has a common sensibility with someone, you don’t need to explain your project to her. She gets it and trusts you, like a mother. I felt that everything was possible with her.” L’Atlas said he was the youngest in the show, and exhibiting in it “was like a detonator” for his career. “I had to progress from concepts and really start painting.”
He then produced his black-and-white “Toiles Errantes” series—images of urban streetscapes that feature his paintings—and agnès b. sent him to show his work in her stores in London, New York, Tokyo, and Osaka. She allowed L’Atlas to emerge from the underground world of graffiti onto the contemporary art scene, and today, she is among his most loyal collectors. He has even taken to the catwalk in Paris twice for her: in 2007 and 2017, when he modeled the series he designed for her menswear collection. 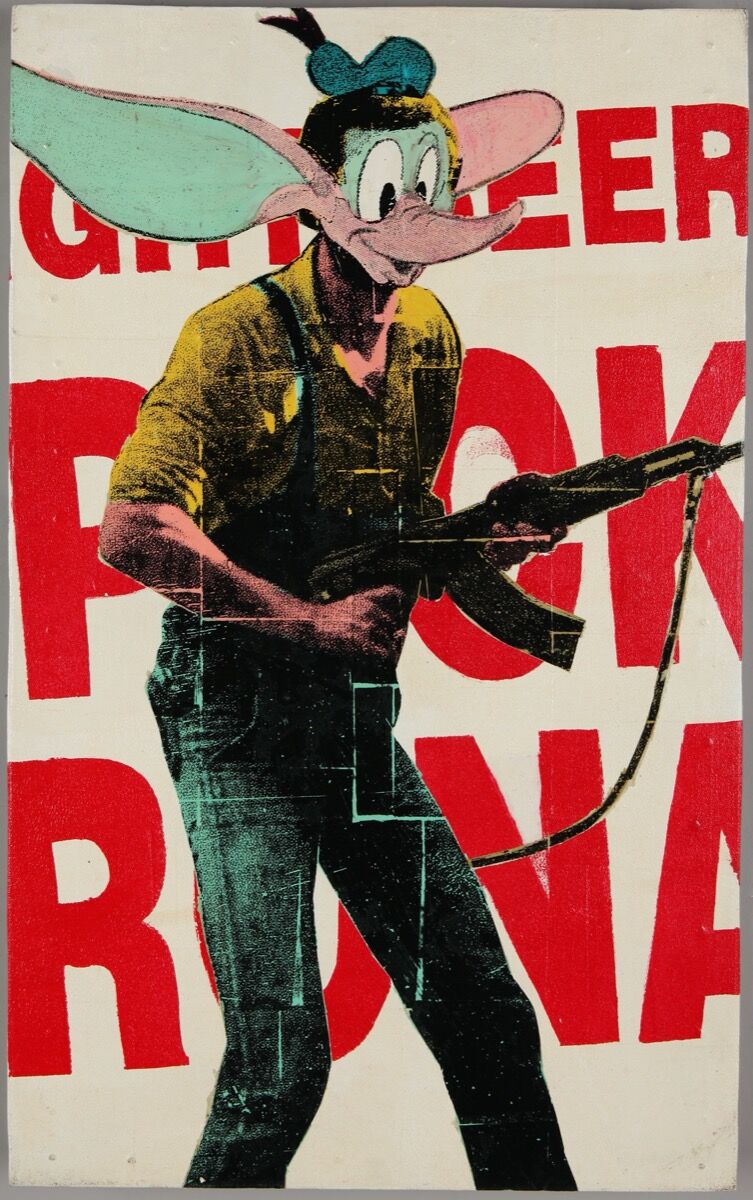 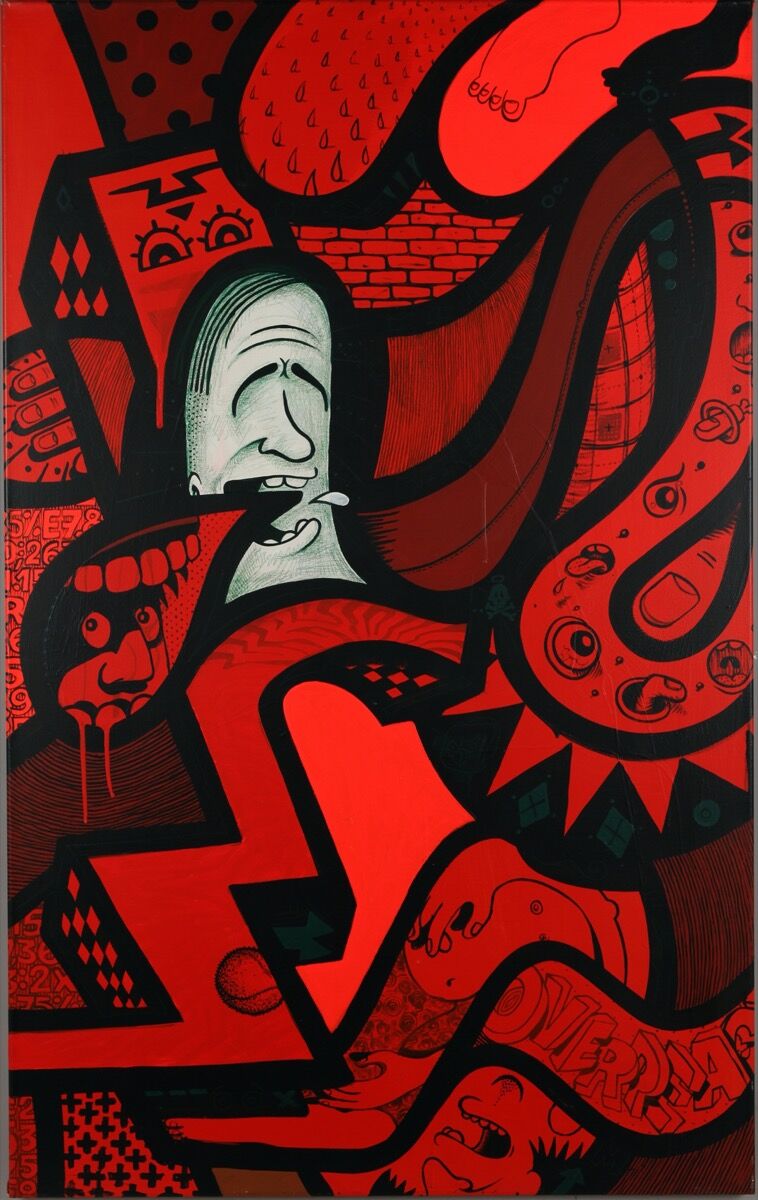 Mambo, Over-react, 2008. Courtesy of the agnès b. Collection.

Among the numerous opportunities agnès b. offered
Mambo
, the one that counted the most was painting his Positivity fresco in a graffiti exhibition in 2009 at Galerie du Jour. He said, “I was at a critical moment in my evolution as an artist, but also on a personal level, and she offered me the biggest wall in the gallery. It was a big boost for me and increased my motivation tenfold. I made one of the strongest works of my career.” The mural has since become iconic in his “Brainology” series, appearing in many books, magazines, and documentaries.
To top it all off, agnès b. surprised him at the exhibition opening with two models in dresses bearing images of his paintings, as she regularly collaborates with urban artists on her clothing collections. “I still wonder if she felt I should have been given this opportunity, as I was about to do something big,” Mambo said. “I will be eternally grateful to her.”
Y-Jean Mun-Delsalle
Related Stories

What Qualifies as Street Art? 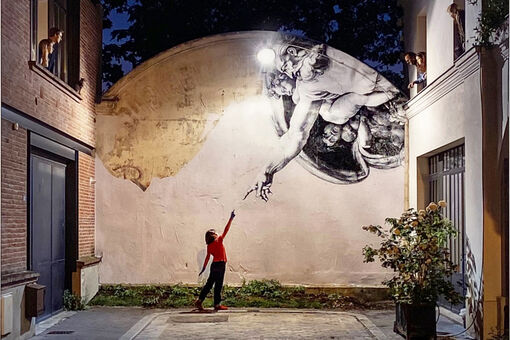 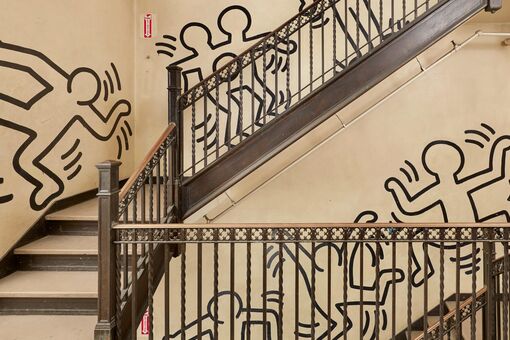 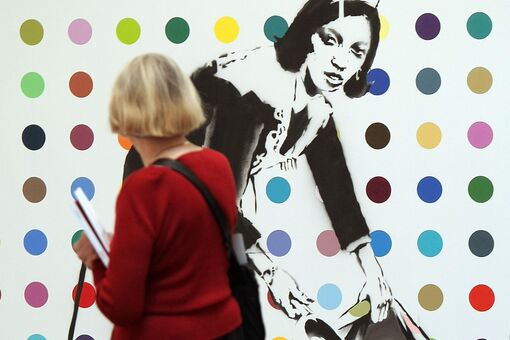