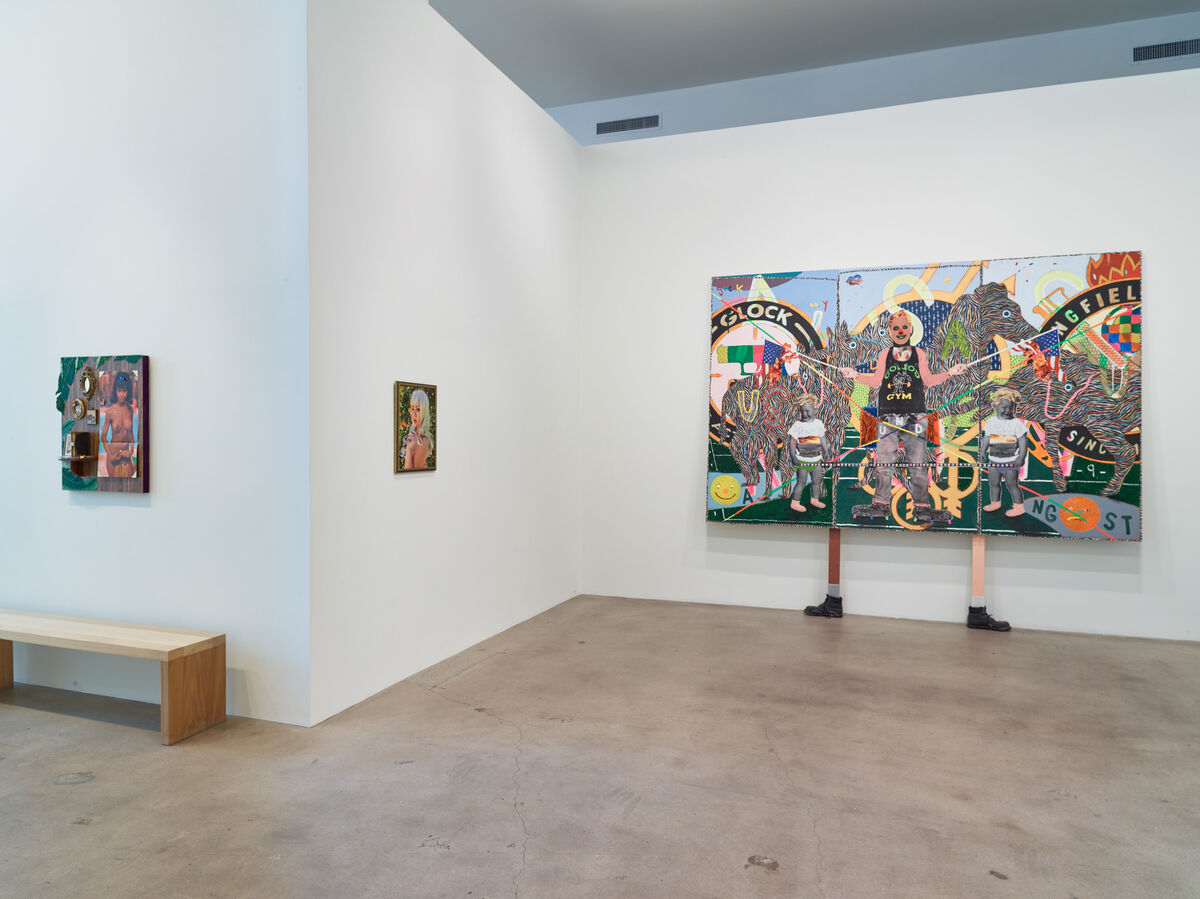 “The New New” at Diane Rosenstein in Hollywood showcases six young, confident artists from New York and Los Angeles. Though shows like this can sometimes seem disjointed, with pieces distracting from each other, “The New New” makes sure each artist has room to stand out, while a sense of self-awareness ties it all together
Genevieve Gaignard
, who has a solo exhibition across town in Venice at Shulamit Nazarian, dresses up in her photographs like a chilled out
Cindy Sherman
, playing the minx and the girl-next-door artist type in her heavily decorated photographs. But it’s her kitschy cool shelf assemblage, Sister, Sister (2015), that feels fresh—pitting her own nudity against that of a Playboy centerfold on a shelf that has the feel of a 1970s finished basement. Another artist making use of found objects is
Michael Shultis
, who repurposes disposed art crates from famous male artists—
Gerhard Richter
,
Frank Stella
,
Robert Longo
, among them—as the basis for heavily collaged, vaguely political pop pictorials.
Jason Stopa
’s deconstructed soft drink paintings play with recognizable pop culture iconography, while
Tschabalala Self
’s figurative collage centers the show with a different kind of loaded iconography—that of the black female figure.
Ray Anthony Barrett
’s politically charged drawings give the show further gravity, deconstructing subtle and overt racism. His ink on paper piece, STOP (2012), rearranges words to read, “STOP MAKING BLACK ART / STOP BLACK ART MAKING,” both a message to himself and an indictment of the world around him.
Aaron Fowler
’s grand mixed media works are at once sculptural and flat and moving, like a pop-up book with deep political messages of national hurt. He Was (2015) addresses the New York Times’ labeling of Michael Brown as “no angel,” working as both a tribute to Brown and a critique of the institution.
At times the show feels urgent, and at other times pensive, but never do the artists seem like they’re from a different ilk altogether, lending the show a satisfying, dynamic tone.
—Maxwell Williams
“The New New” is on view at Diane Rosenstein, Los Angeles, Oct. 17–Nov. 28, 2015.
Follow Diane Rosenstein on Artsy.
Related Stories