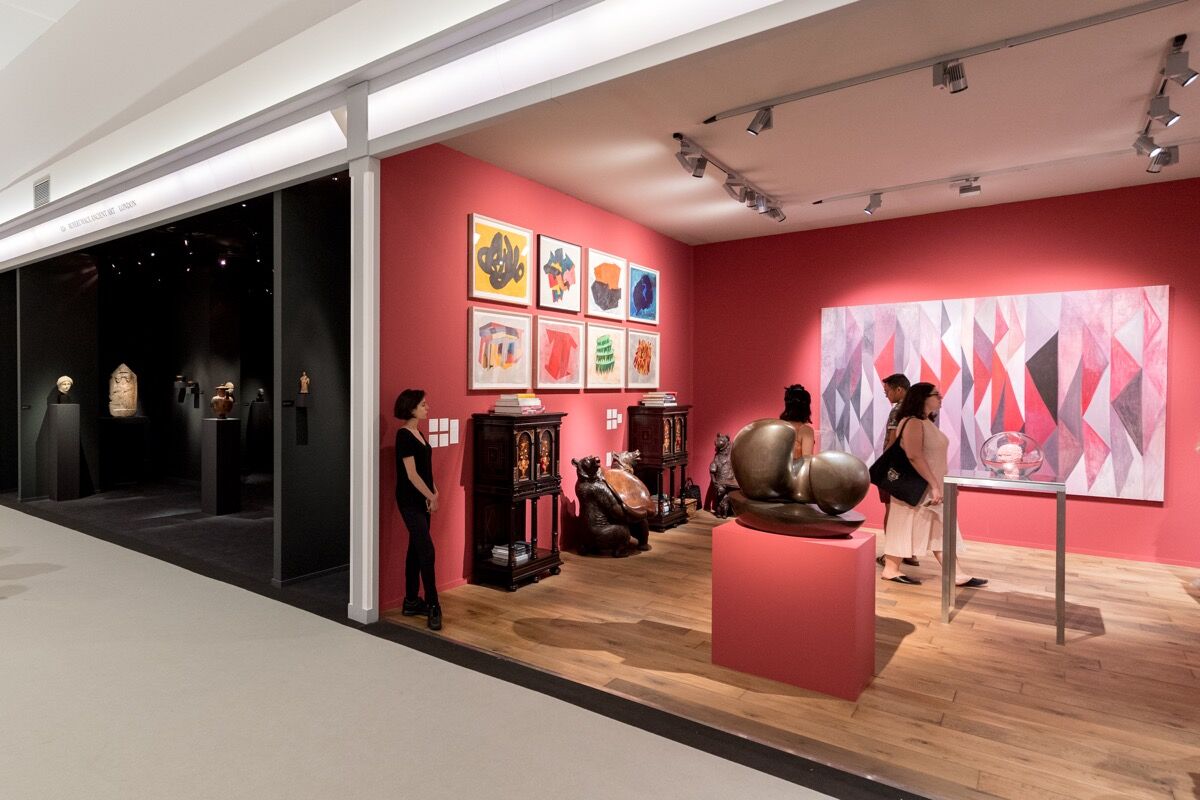 Masterpiece London launched in June 2010 as a modest fair for antiques and luxury goods, catering to a local collector base. It served up an intermingling of
Impressionist and modern
paintings, antiquities, jewelry, and the occasional Bugatti. Much has changed in the intervening years, however, and Masterpiece’s ninth edition, which opened to the public on Thursday, might be better likened to a miniature version of The European Fine Art Fair (TEFAF) set on the Thames.
There is little ambiguity about what’s driven the fair’s recent growth spurt. In late November 2017, the MCH Group purchased a majority stake of Masterpiece London Ltd., aligning the fair with the holding company’s other “collector events”: the Art Basel fairs in Basel, Hong Kong, and Miami Beach; the watch fair Baselworld; the car fair Grand Basel; and the collectible design fair Design Miami, which has shows in both Miami and Basel. (The purchase came as MCH has also been pursuing a new regional art fair initiative, though Masterpiece is being managed separately.)
Beyond injecting both connections and capital into Masterpiece’s flagship edition, the fair’s new owners have big plans to expand its reach. They plan on bottling the upscale British vibe and planting flags around the world; editions in the United States, Asia, and the Middle East are all under consideration, according to Masterpiece’s chairman, Philip Hewat-Jaboor. The expansion plan speaks to the continued importance of fairs as revenue drivers for galleries. It also places Masterpiece directly in the path of TEFAF, which started in 1988, and in 2016, launched two fairs in New York: a modern and contemporary art and design fair in the spring, and a fair focused on antiquity through the early 20th century in the fall. 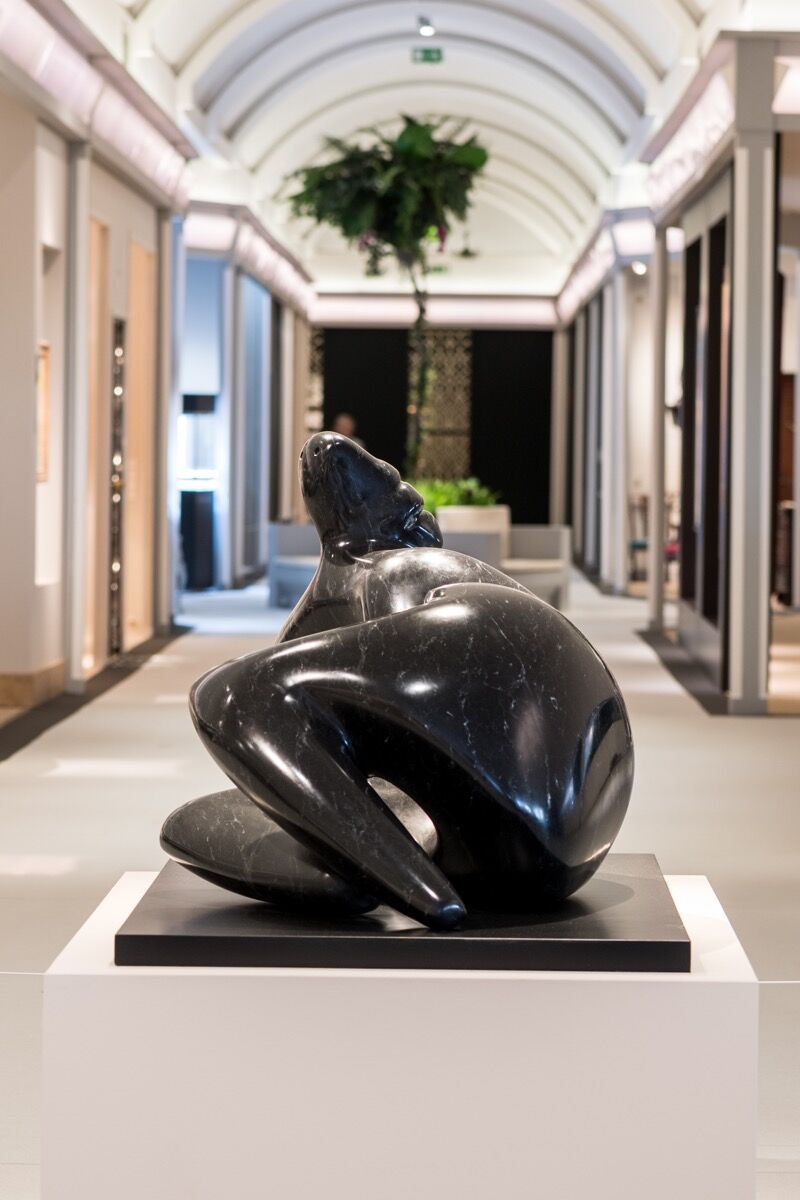 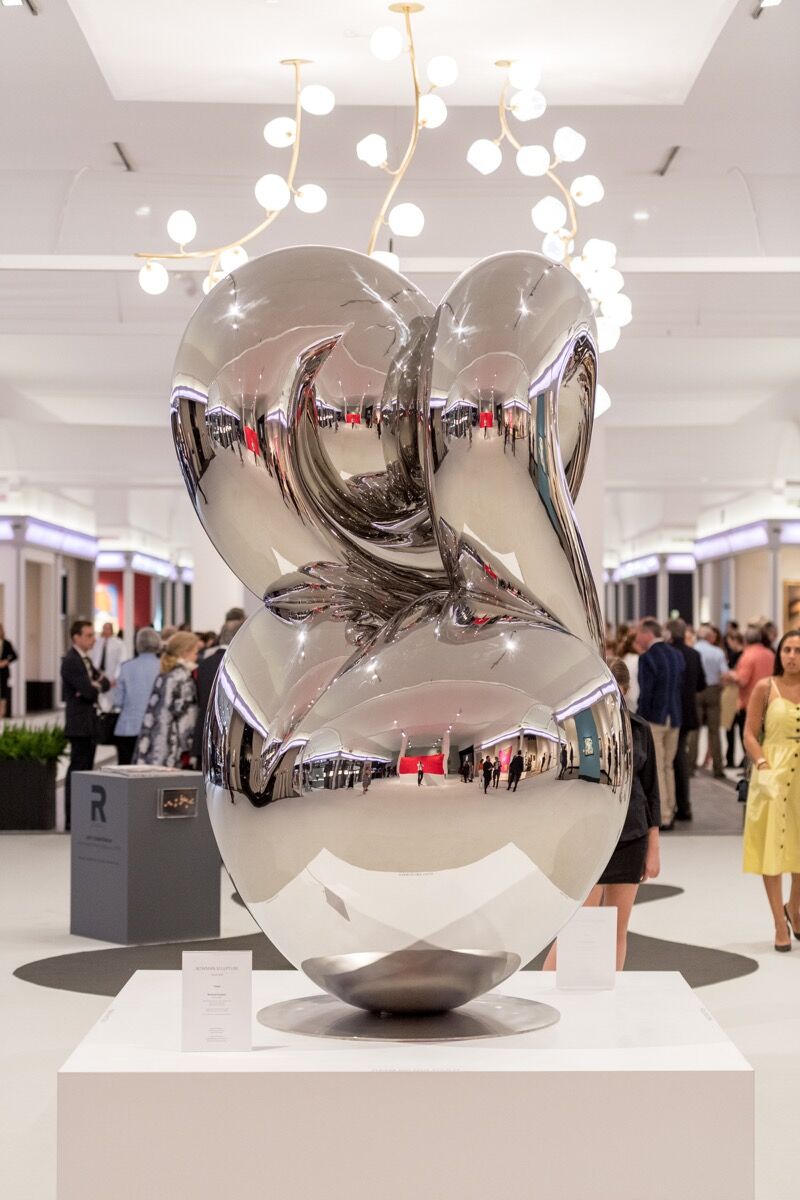 Hewat-Jaboor was looking particularly on-brand during Wednesday’s VIP preview, with a purple handkerchief making a pronounced plume out of the jacket pocket of his double-breasted suit. Sauntering down Masterpiece’s lush, roomy aisles, he said the future of the fair is bright, and that global expansion won’t come at the expense of its characteristic mix of categories.
“When we open elsewhere, which is our plan, the most important thing is that it’s a reflection of the ethos of the fair—the cross collecting mix, that is our DNA,” said Hewat-Jaboor, adding that he and his team aren’t rushing the expansion, but rather want to take time to find the right balance between their British roots and the characteristics of the locations where they may head next.
“It’s really important that one absorbs a certain amount of locality as to where one is—we’re not going to go somewhere and just plunk ourselves down,” he said.
The director was standing by a giant
Henry Moore
statue that had been installed in the middle of an aisle by first-time exhibitor Landau Fine Art, a Montreal outfit whom the fair’s organizers had been courting since its first edition. The booth was near another first-time exhibitor, mega-gallery Hauser & Wirth, which also took advantage of the carpeted aisle to extend its presentation with a gigantic glass sculpture by
Larry Bell
. The gallery’s booth itself riffed on the theme of the Wunderkammer, or cabinet of curiosities, with works by
Paul McCarthy
,
Louise Bourgeois
, and
Eva Hesse
, along with a smashing
Martin Kippenberger
painting, presented alongside wooden chairs from the Black Forest in Germany, which had bears as armrests. 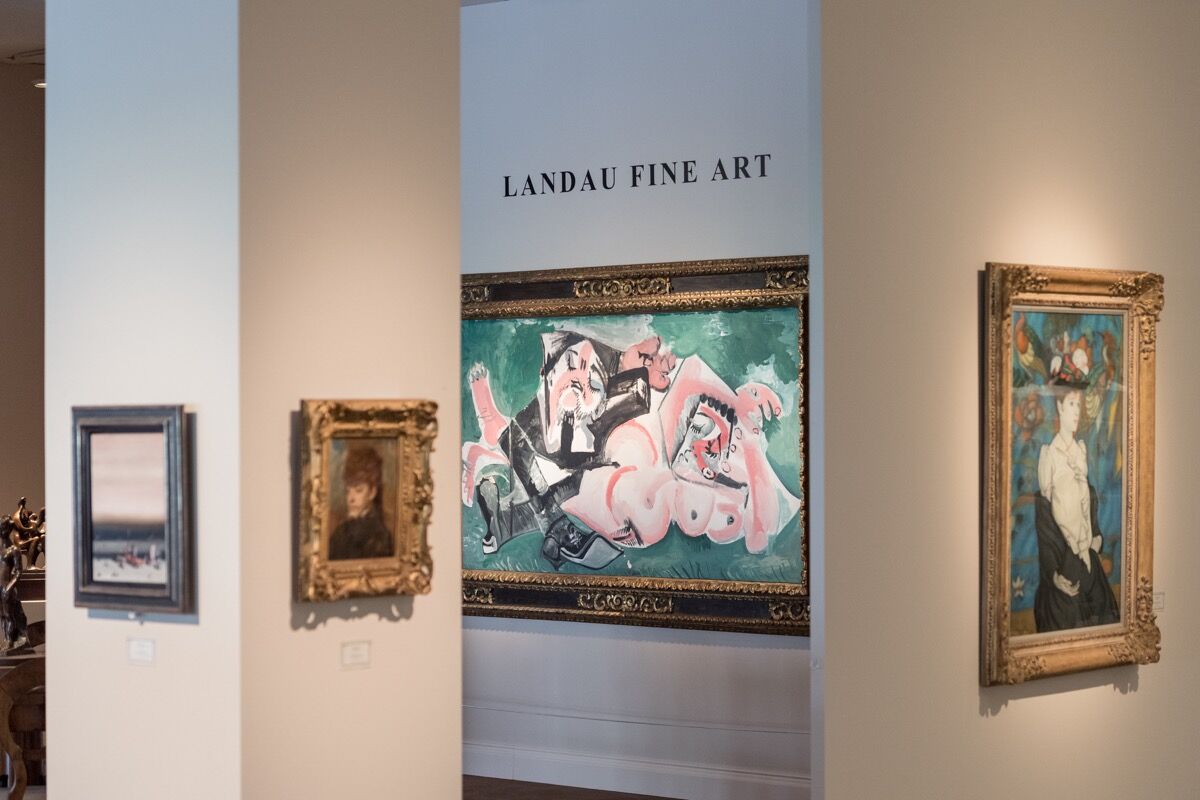 Advertisement
Hewat-Jaboor took a right turn towards a suite of galleries that epitomize the Masterpiece ethos—an almost comical explosion of formal boundaries. A single booth can have a English walnut Nakashima table from a prominent Washington, D.C., political family and a bronze muscle cuirass from 3rd-century Greece alongside a 1980
Helen Frankenthaler
painting. Next door, a dealer is selling
Renaissance
masters, and then there’s a booth stuffed entirely with an Italian-made Riva yacht of pure mahogany, ready to hit the Thames (or, more likely, Antibes). This is a fair that begins with the familiar gambit of placing a flashy work smack-dab at the entrance—in this case
Marina Abramović
’s Five Stages of Maya Dance (2018), alabaster casts of the artist’s face in various stages of agony revealed through a film of mist, onto which her face is projected—and then quickly pivots to things that are unfamiliar to most fairgoers: 13th-century missals on the life of Jesus Christ, sporty Rolls Royces,
Thomas Chippendale
cabinets not seen in hundreds of years, Egyptian sarcophagi, giant black bronzes of octopi. There are dealers peddling fossilized ferns and space asteroids. Hewat-Jaboor said this is all part of a well-calculated strategy.
“We are opening up worlds and taking away the fear of seeing different works of art at the same time,” he said while walking through the booth of Adrian Sassoon, who was showing rack after rack of exquisite porcelain works. “It opens up the market again.”
The MCH Group certainly thinks so. The 67.5% stake it’s taken in Masterpiece is the first acquisition the conglomerate has made in the U.K., and it comes as the company is working to diversify its portfolio of trade shows. The Baselworld watch fair has traditionally been MCH’s cash cow, but perhaps due to downward trends in the watch market, the MCH Group has increasingly looked for new categories and regions into which to expand. It launched the car fair Grand Basel, which will have its first edition in Basel, Switzerland, in September. It snapped up the art-viewing platform Curiator. And it launched the so-called Regional Fairs Initiative, which has, thus far, taken a 25.1% stake in Art Dusseldorf and a 60.3% stake in India Art Fair. (Though often conflated by dealers, collectors, and the press, these initiatives all run separately from the Art Basel fairs in Basel, Miami Beach, and Hong Kong.) Hewat-Jaboor was mum on the precise details of MCH’s investment, but he said that the 102-year-old company’s experience operating internationally was of particular value to Masterpiece as it expands.
Multiple exhibitors noted distinct changes in the fair’s vibe following the cash infusion. Galerie Von Vertes director Quirine Verlinde said her gallery had participated in Masterpiece during one of the fair’s first years, but didn’t return until last year. She said that the MCH Group’s vote of confidence had led her gallery to double down this year by bringing seriously pricey works, such as a £4 million abstract painting by
Gerhard Richter
, which is among the more expensive contemporary offerings at the fair. The bet paid off, as the gallery had a work by
Lucio Fontana
on hold just hours into the eight-day event. Verlinde directly attributed a rise in American and Asian collectors to the new investors and the major galleries that have been attracted to Masterpiece as a result.
“You really notice the difference,” she said.
Verlinde added that the appeal of the fair is its ability to cast a wide net, drawing in collectors of disparate types of objects. “We can sell everything from
George Condo
to
[Wassily] Kandinsky
,” she said. “The mix of everything is so exciting.” 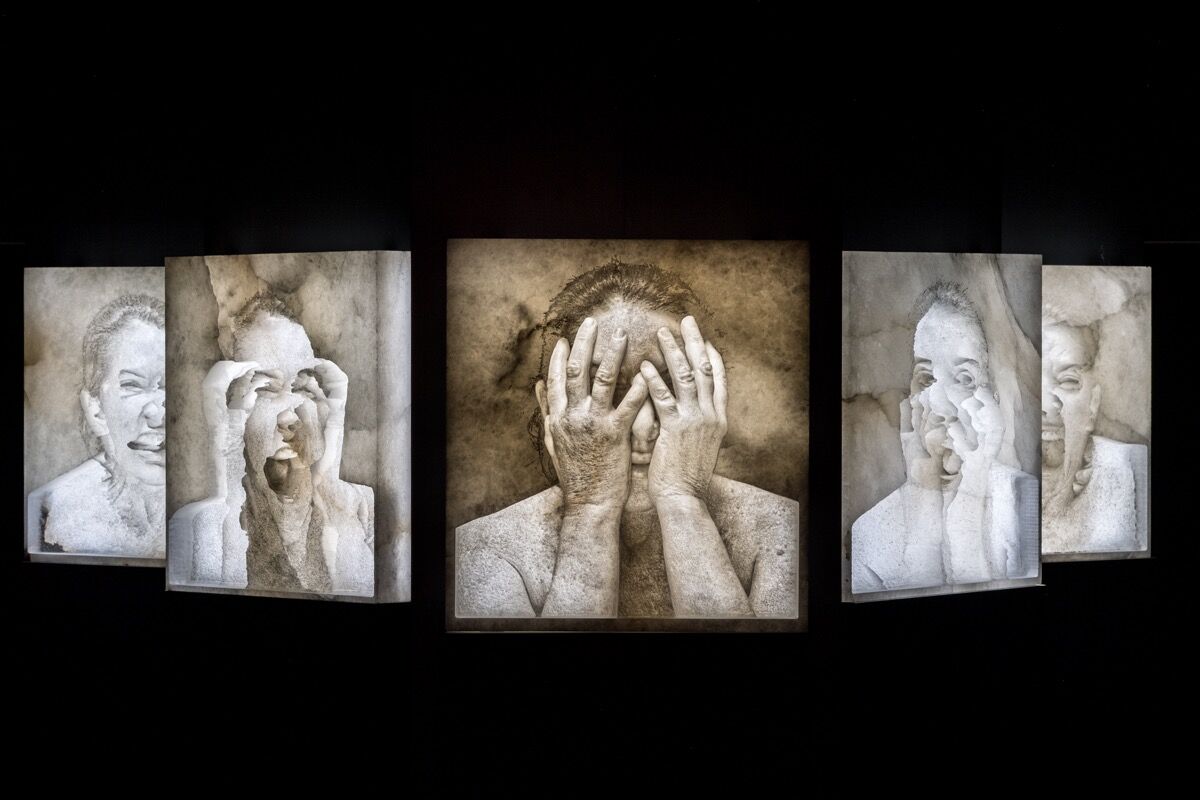 Nowhere better was this mix exemplified than at ArtAncient, a London outfit that specializes in Old World objects, numismatics, and, strikingly, natural objects, such as ancient flora preserved in stone form millions of years ago. The gallery owners said that it’s the busiest they’ve ever been at a fair, having already sold a swirly gogotte formation that bears a delightful resemblance to soft-serve ice cream. The price for that quartz crystal, which they called an “incidental
Surrealist
sculpture,” was £50,000. A sarcophagus from Egypt’s 30th dynasty in the 4th century B.C.—once in the collection of French writer and gay rights activist Roger Peyrefitte—can be had for a sum in the upper six figures. Also for sale, for an undisclosed amount, is a meteorite found in Siberia, with its provenance listed as “Early solar system, 4.6 billion years before present.”
“It’s becoming more understood that anything could be considered an art object—it just depends on your response, your sense of wonder,” said ArtAncient director Costas Paraskevaides while standing by the meteorite. “It’s a cross-collecting fair, and we’re working with extreme contrast here. We’re trying to awaken people’s curiosity.”
Another work with an exquisite provenance—if not quite the same patina of age—is
Pablo Picasso
’s Les Dormeurs (1965), in Landau Fine Art’s booth. The 6-foot-long canvas once hung above the desk of the artist’s dealer, Daniel-Henry Kahnweiler. At $35 million—a price tag so high, it would be an outlier if sold, even at TEFAF or Art Basel—gallery president Jennifer Landau Evans said it was a testament to the confidence the gallery had in Masterpiece’s calibur and ability to attract big-ticket collectors. She added that moving the fair back a week so it wasn’t bumper-to-bumper against Art Basel also helped, and described Masterpiece as “a fair where we might meet someone that we wouldn’t meet” elsewhere. 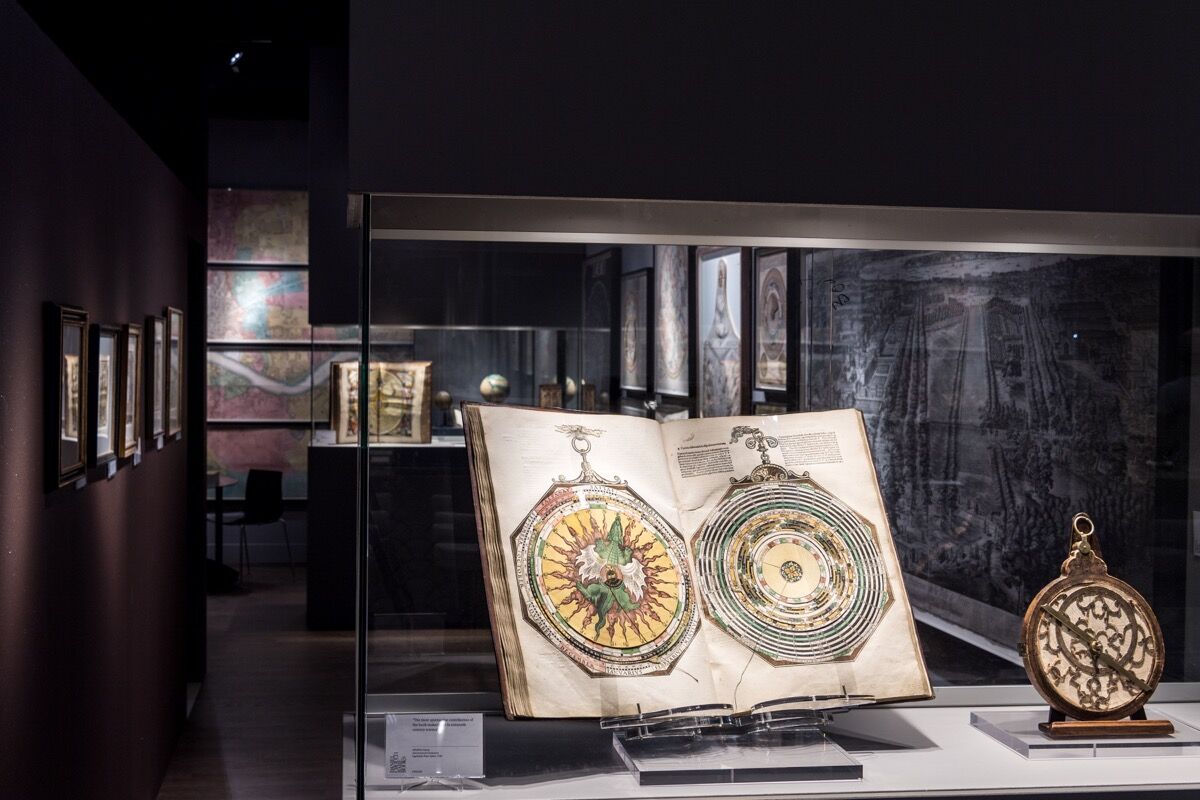 “This is Chelsea, and Wimbledon is going on—and people just live here,” she said.
But perhaps the fair’s biggest coup was to get Hauser & Wirth to come on board (when the exhibitor list was announced in April, the gallery’s appearance on the list merited its own news story). Senior director Neil Wenman said the decision to participate was led by Hauser & Wirth’s London team, who thought it would make for a good “crescendo to the end of the season.”
“It just felt right for Hauser & Wirth, for where the gallery is at, and where the fair is at,” he said.
Wenman said the results thus far did not disappoint: Kippenberger’s divine painting, which comes from his “Krieg Böse” series of the 1990s, was still available on the second day, but the gallery successfully sold
Hans (Jean) Arp
’s Cuillère et nombrils (Spoon and Navels) (1928) for €1.5 million. It was one of the few publicly reported sales in the fair’s first days. Most dealers, including Wenman, chalked this up to the fact that Masterpiece is—similarly to TEFAF—longer than the average fair, allowing collectors to drop in and out, and buy when they feel like it. He said that some collectors, particularly those from New York, were waiting to fly in until Monday in order to swing by Masterpiece after catching a few Wimbledon matches.
“I think the pace of Masterpiece is very different,” Wenman said. “It’s a lot more genteel; there’s very much a sense that one comes when it’s convenient for the collector. There’s not tsunamis coming in on the first day, and I think that’s great.”
Across the aisle, Van Cleef & Arpels was selling a very different kind of luxury item: a trefle necklace studded with 17 pear-shaped Burmese sapphires, which were sourced in the 1950s. “Without technology, a lot of people perished trying to source these sapphires,” the jewelry dealer in the booth had said matter-of-factly. The price tag for those lost souls’ efforts: £1.5 million. 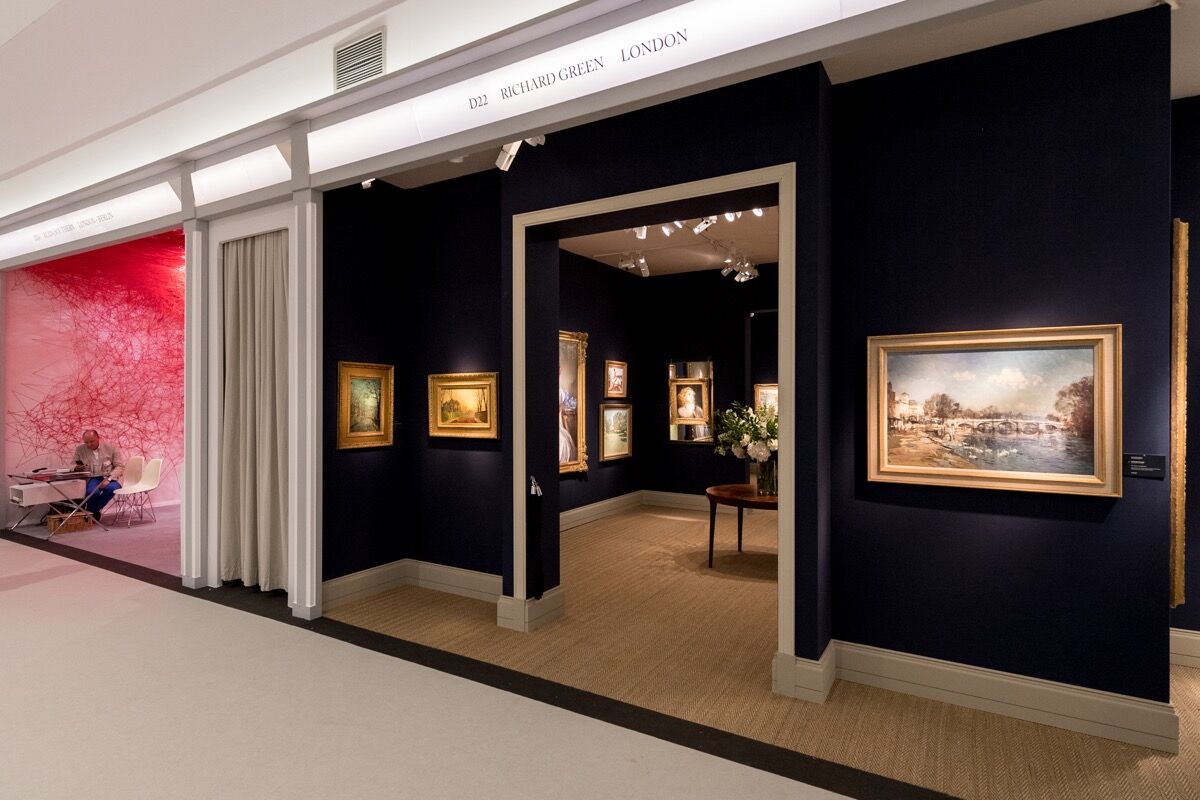 Asked whether an outfit selling necklaces is an incongruous fair partner to Hauser & Wirth, Wenman insisted that the mix at Masterpiece is mutually beneficial.
“There’s jewelry, boats, watches—coming from a contemporary art background, one would expect that to be somehow wrong, but weirdly it feels totally right,” Wenman said. “Why can’t the same person enjoy both in the same visit? I would hate to think that every art-buyer is irrelevant of time, and stripped of all jewelry, and has no water transport—it would be a terrible world if that was the case!”
Looming large is the question of whether Hauser & Wirth—or any similar mega-gallery with enough clout to make or break a fair—would participate in further iterations of Masterpiece around the globe, spreading itself even thinner across an ever-expanding art fair landscape. Wenman noted that the gallery already does TEFAF in New York—would it really need to have a booth at the Masterpiece equivalent, too?
“We would definitely consider it,” he said. “It depends where and when—obviously, if it’s the same week as Art Basel, no. But if the timing feels right, and the location is interesting for us, of course we’d consider it.”
Nate Freeman
Related Stories