Abigail Cain
May 24, 2017 4:04pm
Flowery language can spell disaster for writers. Flowery canvases, on the other hand, have long been a mainstay for artists. But it wasn’t until the 1800s, with the rise of the horticultural movement, that artists began to cultivate their own gardens en masse. Like
Claude Monet
at Giverny, many painters at the time intended for their vibrant blooms to serve as inspiration for their work. But the practice extends far beyond the
Impressionists
of the 19th century. From
Sol LeWitt
’s geometric flowerbeds in Philadelphia to
Frida Kahlo
’s indigo-walled courtyard in Mexico City, here are eight remarkable artist-designed gardens. 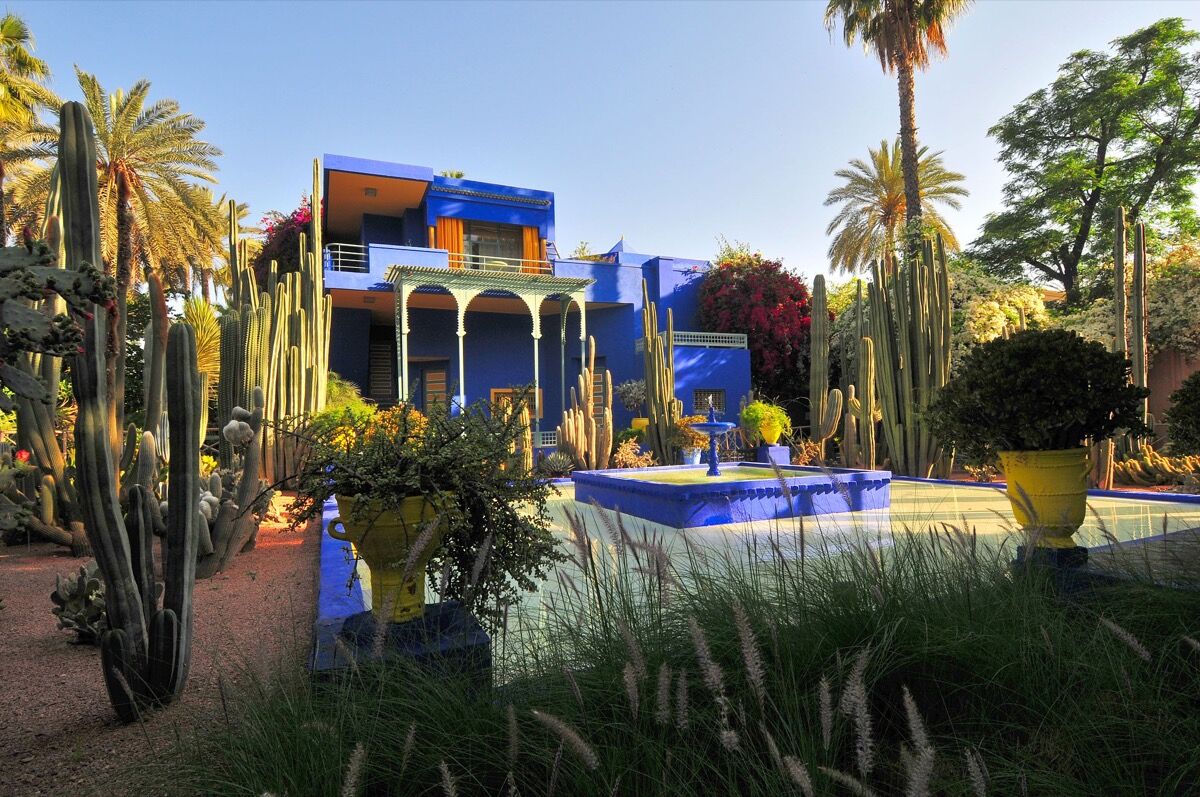 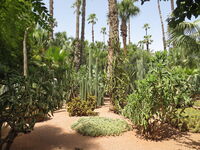 3 Images
View Slideshow
A heart condition drove French painter Majorelle to the warmer climes of Morocco, where he finally settled in a home just outside Marrakech in 1923. The artist built an Art Deco studio on his property, but it was the surrounding gardens that would become his life’s work. Majorelle spent four decades tending the land, often sourcing exotic plants from across the globe—some 300 species in total, from Texas’s agave cactus to China’s black bamboo. He also painted the walls of his studio with “Majorelle blue,” the brilliant color he trademarked in the 1930s, its hue inspired by Moroccan tiles.
Following a car accident, Majorelle was forced to return to Paris in 1962 and died months later. His magnificent garden fell into disrepair, and by 1980 it was slated for redevelopment—that is, until Yves Saint Laurent and Pierre Bergé stepped in. The pair purchased the property and restored Jardin Majorelle to its former glory for the 700,000 people who now visit each year. 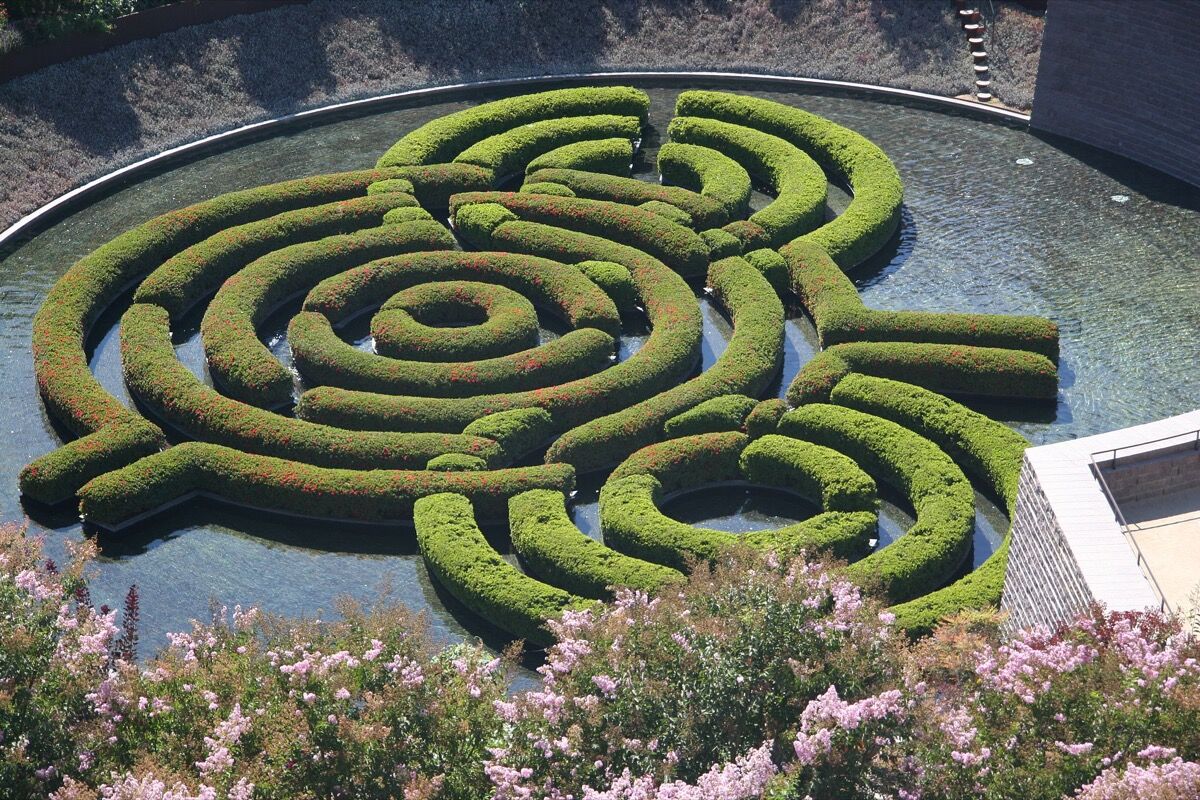 Advertisement
Although
Irwin
began his artistic career as an
Abstract Expressionist
painter, he soon became a member of the California
Light and Space movement
. Then, he gave up making objects at all, instead tackling projects like a revamp of the Miami Airport and a design for the Getty’s Central Garden. It was Irwin’s first garden, and to prepare, he bought roughly a thousand dollars worth of horticultural books and cut them up for a preparatory collage.
The final garden design (developed alongside the Getty Center’s discerning architect, Richard Meier) features a winding stream that cascades down the hillside into a bougainvillea-shaded plaza, eventually collecting in a pool topped with a floating azalea maze. Despite Los Angeles’s year-round temperate weather, Irwin’s creation was intended to be seasonal; it featured deciduous trees and more than 500 plant varieties. “There’s no palette as rich as a garden,” Irwin mused on the 10th anniversary of his creation. 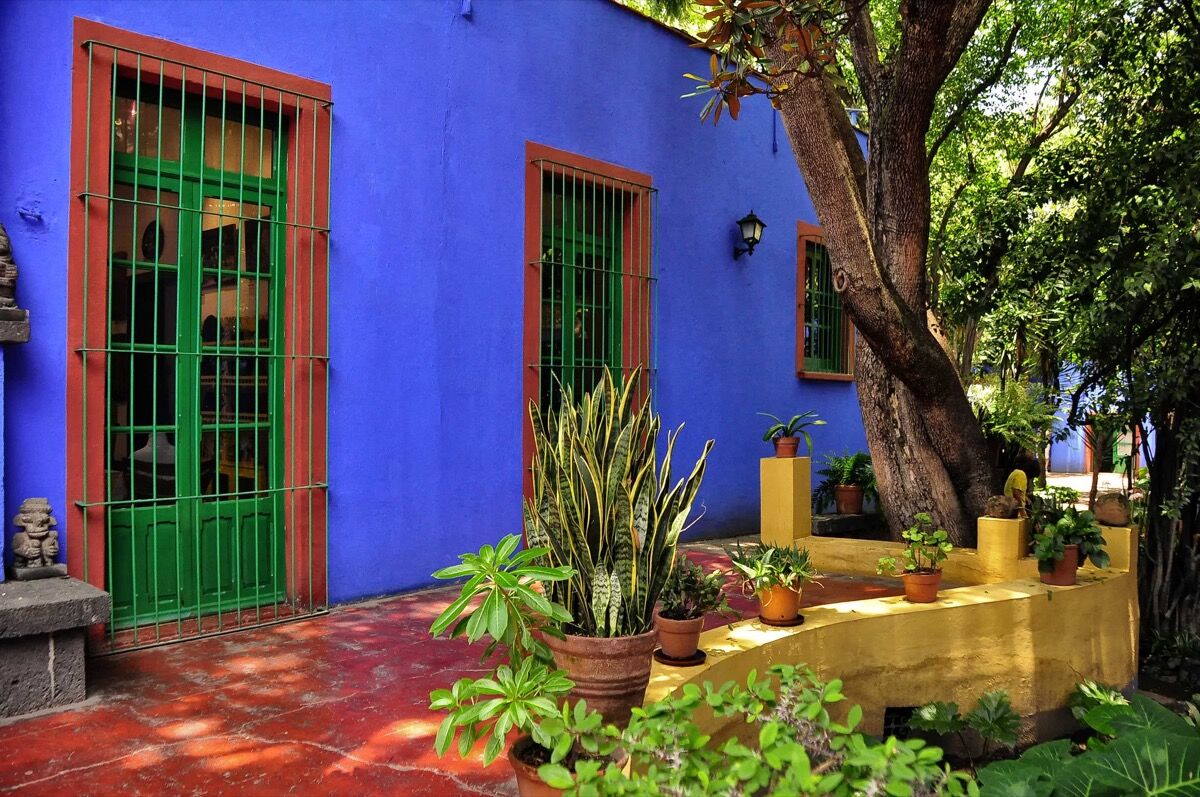 In photographs and self-portraits, Kahlo’s hair often resembles a miniature flowerbed in its own right. The blooms threaded through her braids were likely sourced from her walled garden at Casa Azul, the house where Kahlo was born in 1907 and died in 1954. Alongside flowers, the artist cultivated fruit trees—orange, apricot, and pomegranate—and plants native to her beloved Mexico, including prickly pear and agave. She further emphasized her nationalist ideology through a miniature Aztec-inspired pyramid, designed with her husband
Diego Rivera
, that still stands amidst the vegetation. The couple even used a traditional Mexican pigment to paint the surrounding walls a vivid indigo. 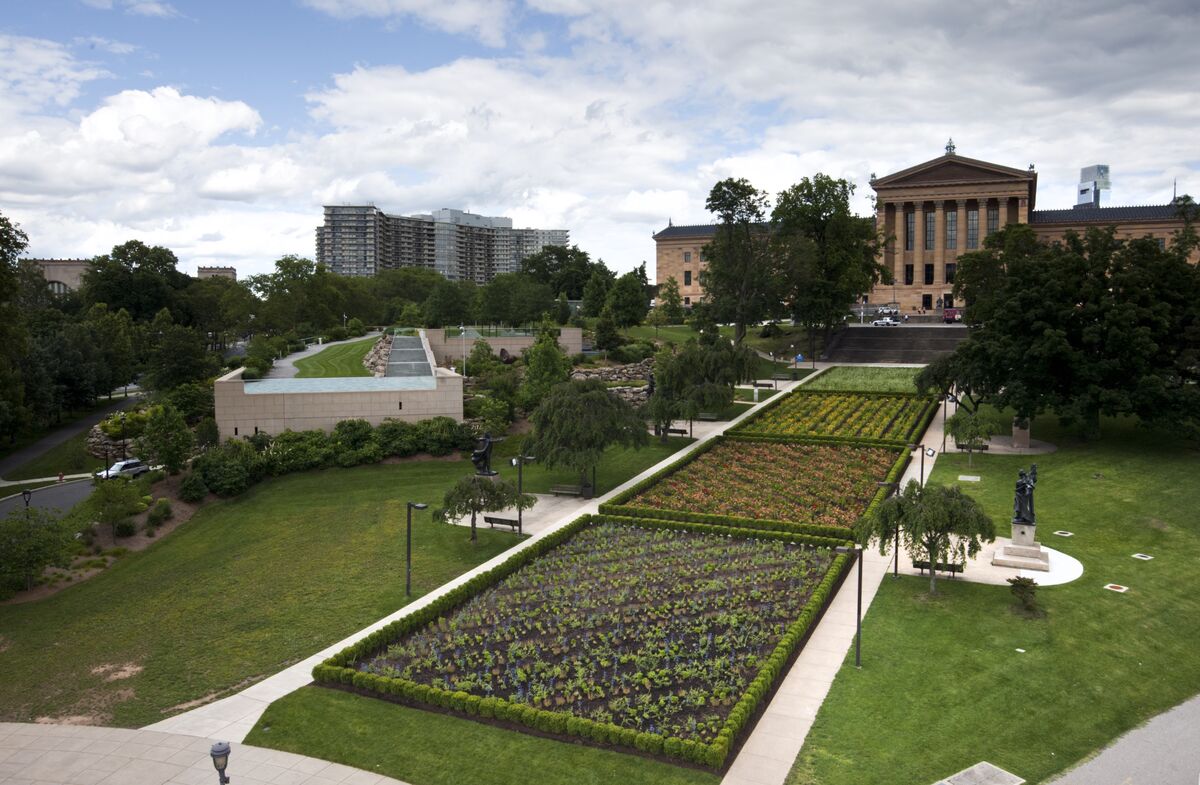 Sol LeWitt’s Lines in Four Directions in Flowers in Philadelphia. Courtesy of the Philadelphia Museum of Art Library and Archives

It took nearly three decades, but LeWitt’s design for a garden in Philadelphia’s Fairmount Park was finally realized in 2012 (the artist himself had died five years earlier). Although the medium was plants in soil rather than paint or pencil on the wall, Lines in Four Directions in Flowers echoed the geometric compositions of the conceptual artist’s signature wall drawings. As with most of his works, LeWitt laid out the design but left the rest up to others—in this case, he specified a botanist to select plant species and a gardener to maintain the grounds. Each of the four quadrants were planted with a series of perennials that would bloom in the specified color, including peachleaf bellflowers for white, yarrow for yellow, cardinal flowers for red, and Russian sage for blue. 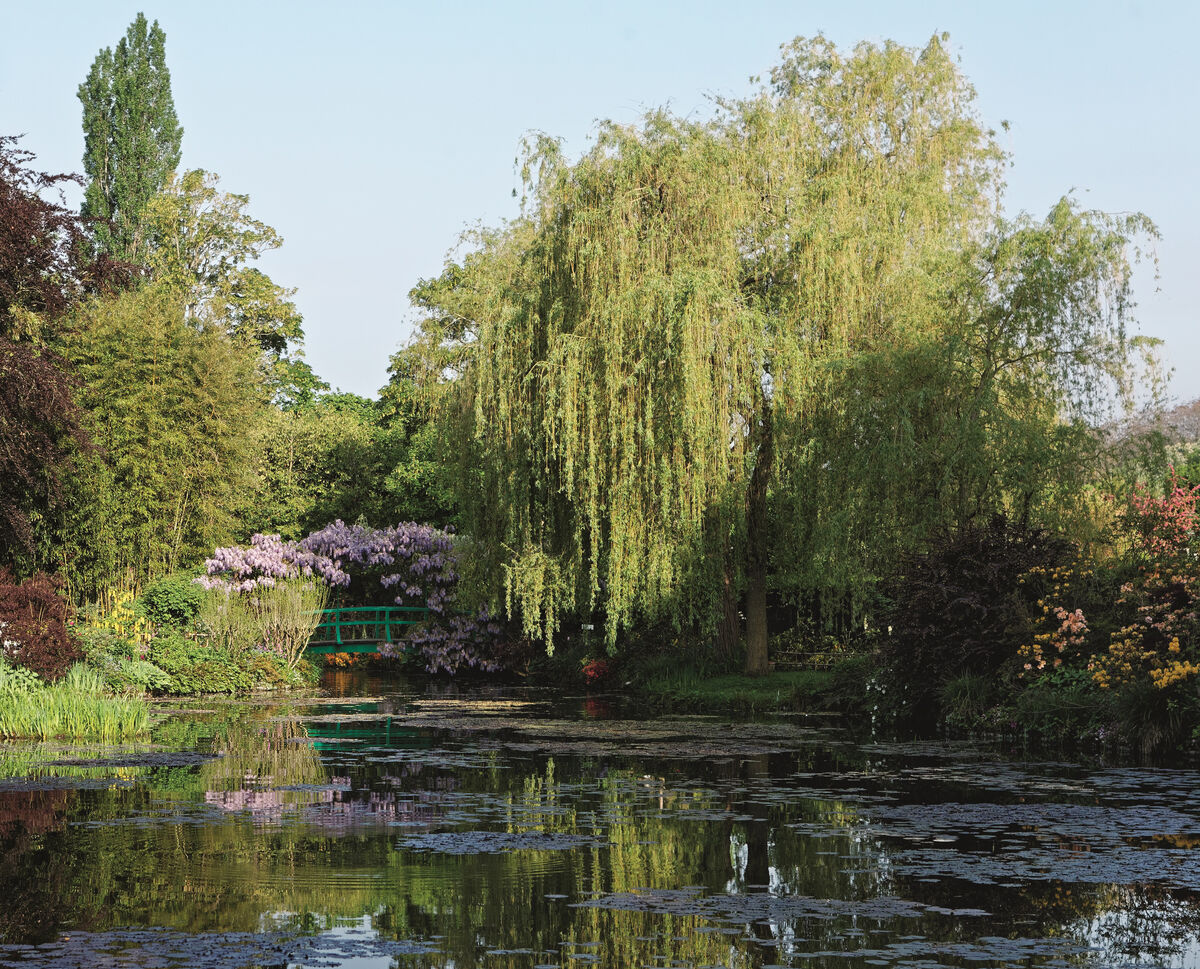 Claude Monet’s garden in Giverny. Image © Francis Hammond, from A Day with Claude Monet in Giverny, by Adrien Goetz. Courtesy of Flammarion, 2017.

4 Images
View Slideshow
“I perhaps owe it to flowers that I became a painter,” Monet once said. And certainly, no discussion of artists and gardens would be complete without the noted Impressionist, whose grounds at Giverny have become a legend in their own right. Monet moved there in 1883, enlisting the help of his family and six gardeners to fashion a living masterpiece. From vivid beds of irises and chrysanthemums to the Japanese-inspired water garden, each tableau was designed to be painted—and they were, on canvases that have since become some of Monet’s most famous works.
The artist was deeply invested in horticulture and devoured the gardening journals and books of the time. His now-iconic water lilies were actually a hybrid species, developed by a French plant breeder and displayed at the Exposition Universelle in Paris, where Monet spotted them in 1889. 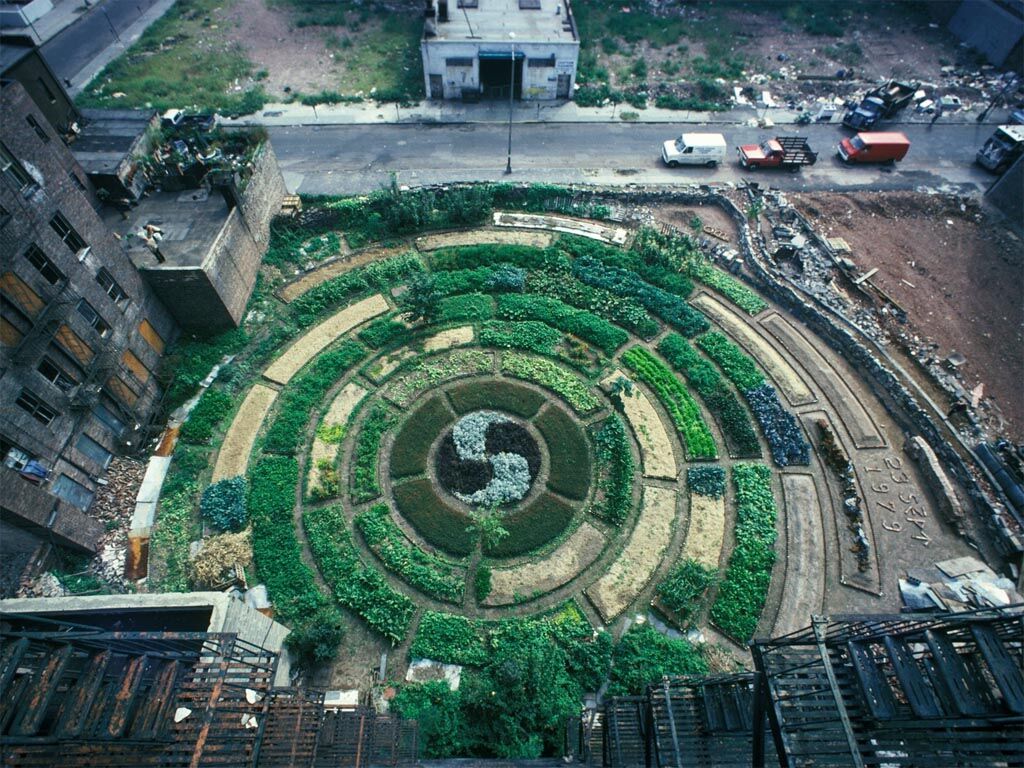 When Purple looked out the window of his Lower East Side tenement building, he saw kids playing in garbage and thought, “That’s a hell of a way to raise children, with no place to, you know, put your feet on the dirt.” So, in 1975, he began clearing debris that had accumulated on two nearby lots to make space for what became his “Garden of Eden.” Its circular design, with rings of vegetables and fruit trees surrounding a central yin-yang symbol, was based on that of a 19th-century utopian city planner. At its peak, the garden would span five city lots and cover 15,000 square feet, attracting the attention of National Geographic and other publications.
Although Purple (whose given name was David Wilkie) had no formal training in the arts, he considered himself an environmental sculptor, and his garden, which elicited comparisons to the work of
Robert Smithson
and
Agnes Denes
, his masterwork. But it was gone in less than a decade. Despite the efforts of Purple and his supporters, the city razed the garden in 1986 to make way for a new housing development. 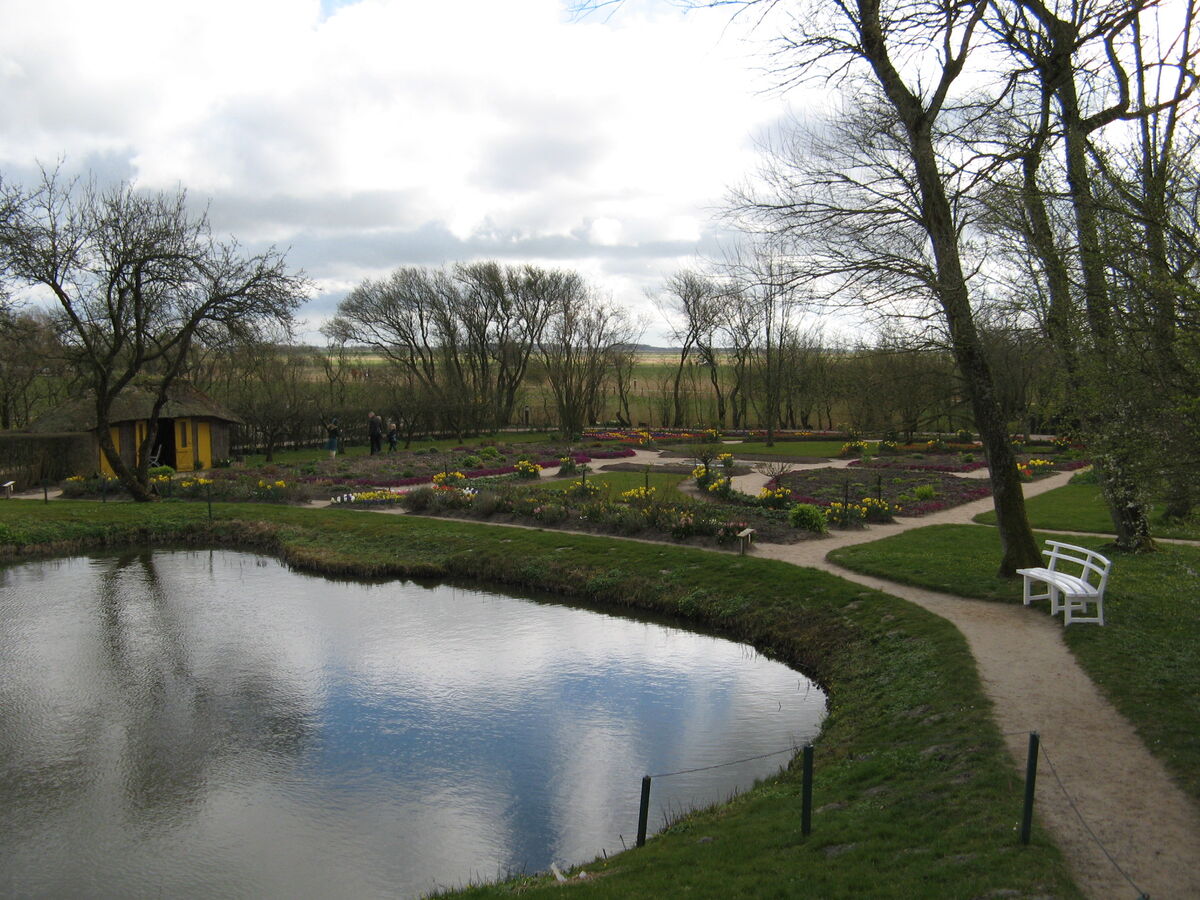 It was at Seebüll that painter
Nolde
and his wife, Ada, put down their strongest roots. The house, located in northern Germany, would be the
German Expressionist
painter’s residence from 1927 until his death in 1956. It wasn’t an easy place to grow a garden—they had to mix sand and peat into the existing soil to make it more hospitable for plant life. Later, they built a reed fence to protect their shrubs from the harsh winds. But the end result was lovely, even featuring a path through the flowerbeds in the shape of the couple’s initials.
Nolde once said, “The color of the flowers drew me magnetically to them,” and all through his life he painted the blossoms filling his gardens: scarlet poppies, golden sunflowers, pure white lilies. The lush grounds at Seebüll concealed a darker truth, however. Despite his support for the National Socialists, Nolde was classified as a degenerate artist in the 1930s and all but banned from painting by the Nazi regime. 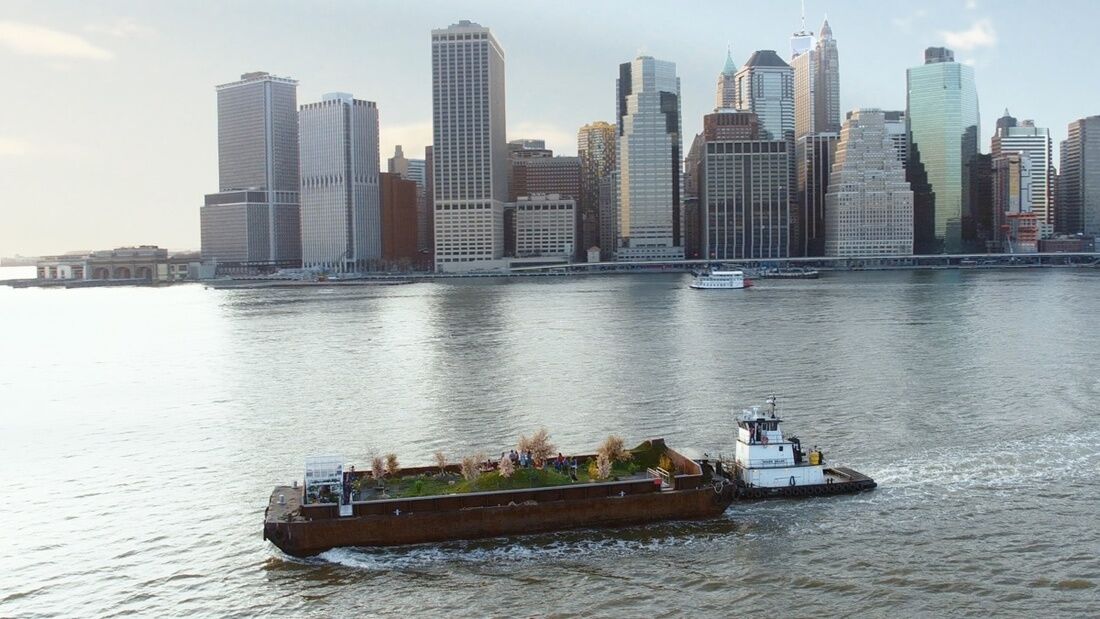 Mattingly
’s garden—a “food forest” where visitors can forage for anything from blueberries to collard greens—is a novelty in New York City, where public parks are prohibited from growing edible plants for people to consume. That’s why the New York-based artist planted her crops on board Swale, a 5,000-square-foot barge currently floating in the East River. Now in its second year, the interactive public artwork highlights the city’s policies and exemplifies how park-based urban farming could combat food deserts. Mattingly herself is working actively to change the rules, by meeting regularly with the Parks Department and other city organizations. For now, Swale will dock in both Brooklyn and the Bronx over the summer—allowing New Yorkers free access to its perennial garden and fresh produce.
Abigail Cain
Related Stories 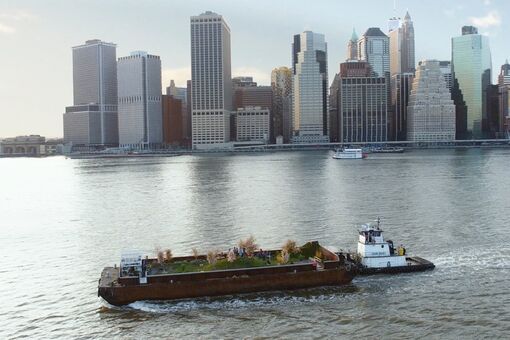