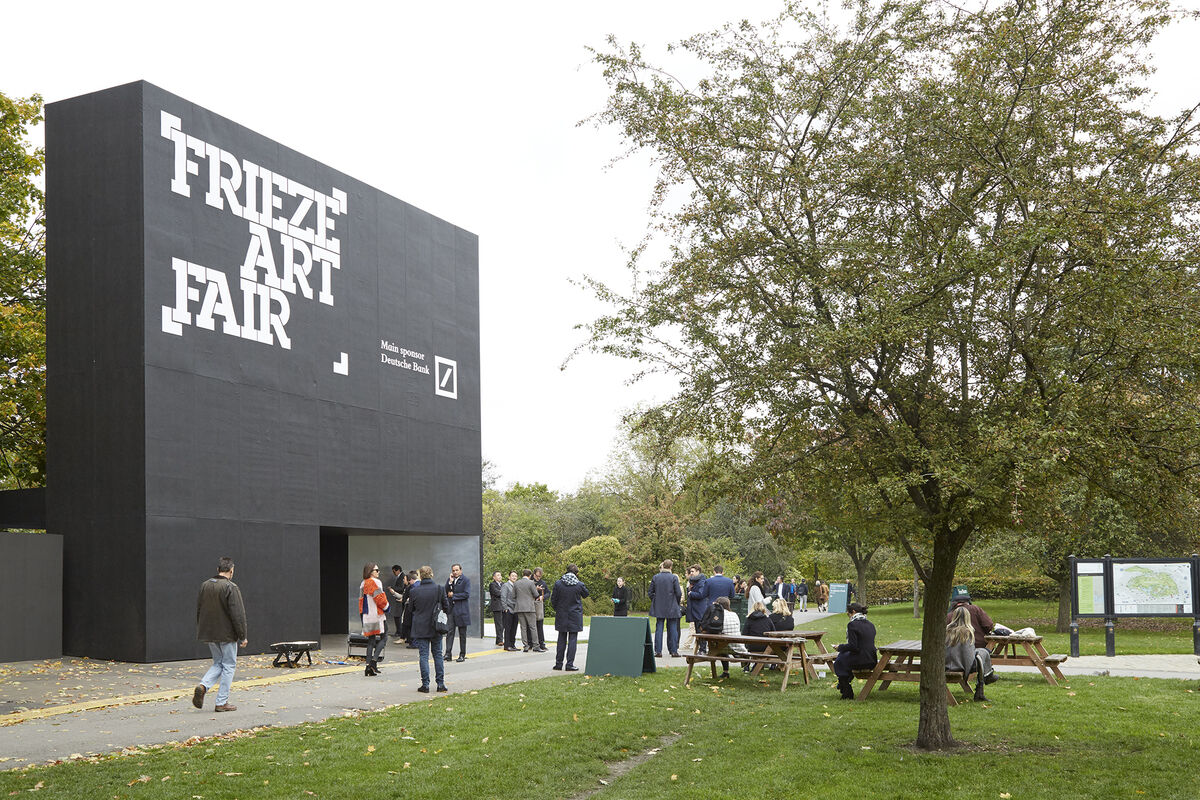 Frieze London opened to throngs of VIPs on Tuesday, ringing in the 13th edition of the U.K.’s biggest art fair—with 164 galleries from 27 countries. This year marks the fair’s first edition under the direction of Victoria Siddall, who was tapped from her post as director of Frieze Masters to helm all three Frieze Fairs, including spring’s Frieze New York.
By all accounts, Tuesday’s preview was among the busiest in recent memory. “It’s packed this year,” said collector Kamiar Maleki. “I’ve never seen so many people at Frieze.” Maleki was among art–world insiders on the hunt for works by the crème of emerging art, in keeping with Frieze’s long-held dominance in the category. But he was also quick to note pundits’ apprehensions about the health of that market segment as the busy fall season commenced. For Frieze, at least, he speculated only positive results were ahead: “We’ll have to see with the sales later, but it seems like it’s definitely booming.”
Booming in noise-level, at the very least. Such was the din during the peak afternoon hours that works incorporating subtle elements of sound, such as
Inge Mahn
’s Stuhlkreis (2000), on offer at Berlin and Paris’s Galerie Max Hetzler, could barely make their presence known. The kinetic sculpture created by the relatively unknown, 70-year-old Mahn sees one wine glass placed on each of the 17 plaster-covered wooden chairs placed in a three-meter circle, while two crystals slowly rotate on opposite ends of a motorized aluminum tube, tapping the glasses to create a sonic effect. According to Paris director Samia Saouma (also Hetzler’s wife), the dealer rediscovered the artist at a museum show in Germany and recalled seeing her work years before in Harald Szeemann’s Documenta 5 in 1972. 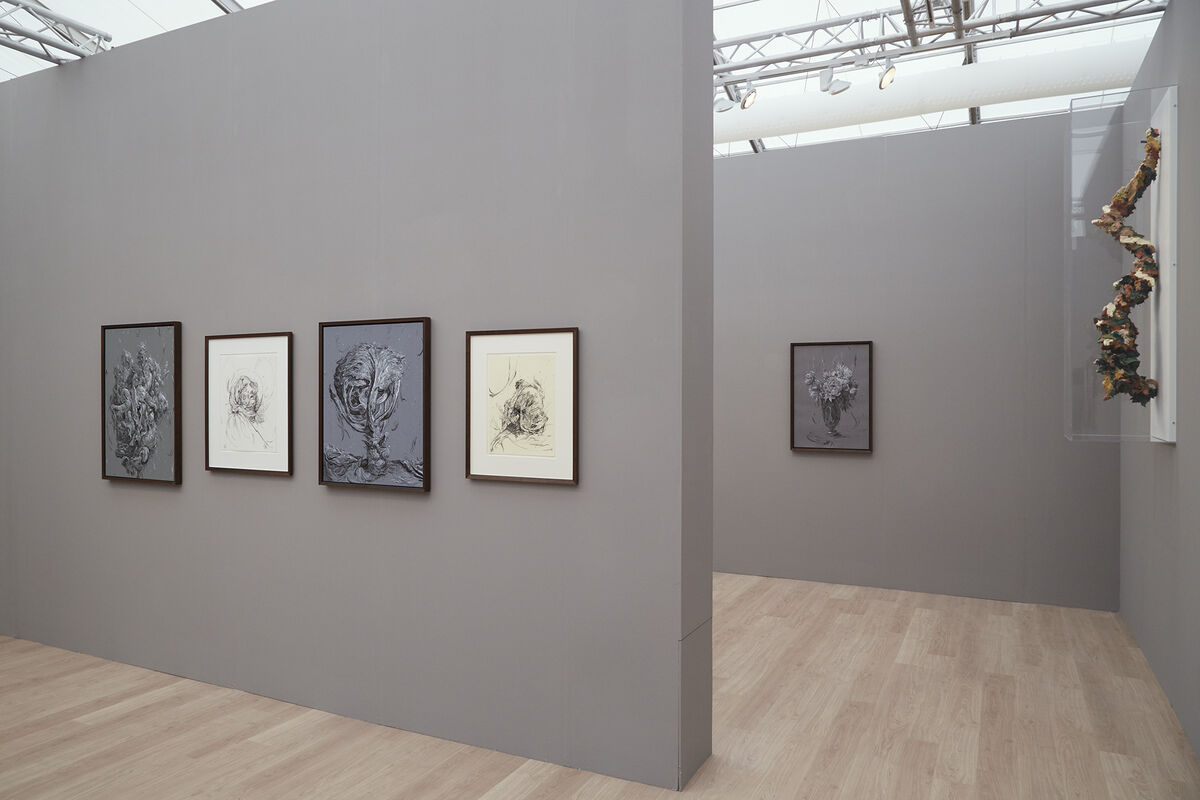 Works by Glenn Brown at Gagosian’s booth at Frieze London, 2015. Photo by Benjamin Westoby for Artsy.

The work was unsold as of Tuesday evening. But a large-scale
Günther Förg
from 2008 had been sold to an Asian collector for €300,000, Albert Oehlen’s U.D.O. 7 (2001/2005) to an American for €250,000; an
Edmund de Waal
went to a French collection for €75,000; and a
Raymond Hains
to a European for €70,000. An above-seven-figure painting by Glenn Brown—who’s been given a solo at Gagosian’s front-and-center booth at Frieze’s entrance—was on reserve.
At least one work did crest into the million-dollar range during Frieze’s preview: a $1.2 million
Damien Hirst
, titled Holbein (Artist’s Watercolours) (2015), from London’s White Cube. It’s a fitting note for the fair. The
YBA
’s 1988 show “Freeze,” including
Sarah Lucas
,
Gary Hume
, and
Mat Collishaw
, among others, served as inspiration, in part, for Frieze founders Matthew Slotover and Amanda Sharp back in 2003. And just last Thursday, Hirst opened his own private gallery in London’s Newport Street with a show of
John Hoyland
. Works by
Andreas Gursky
, Antony Gormley,
Theaster Gates
, and
Christian Marclay
were also acquired from White Cube’s stand on opening day. 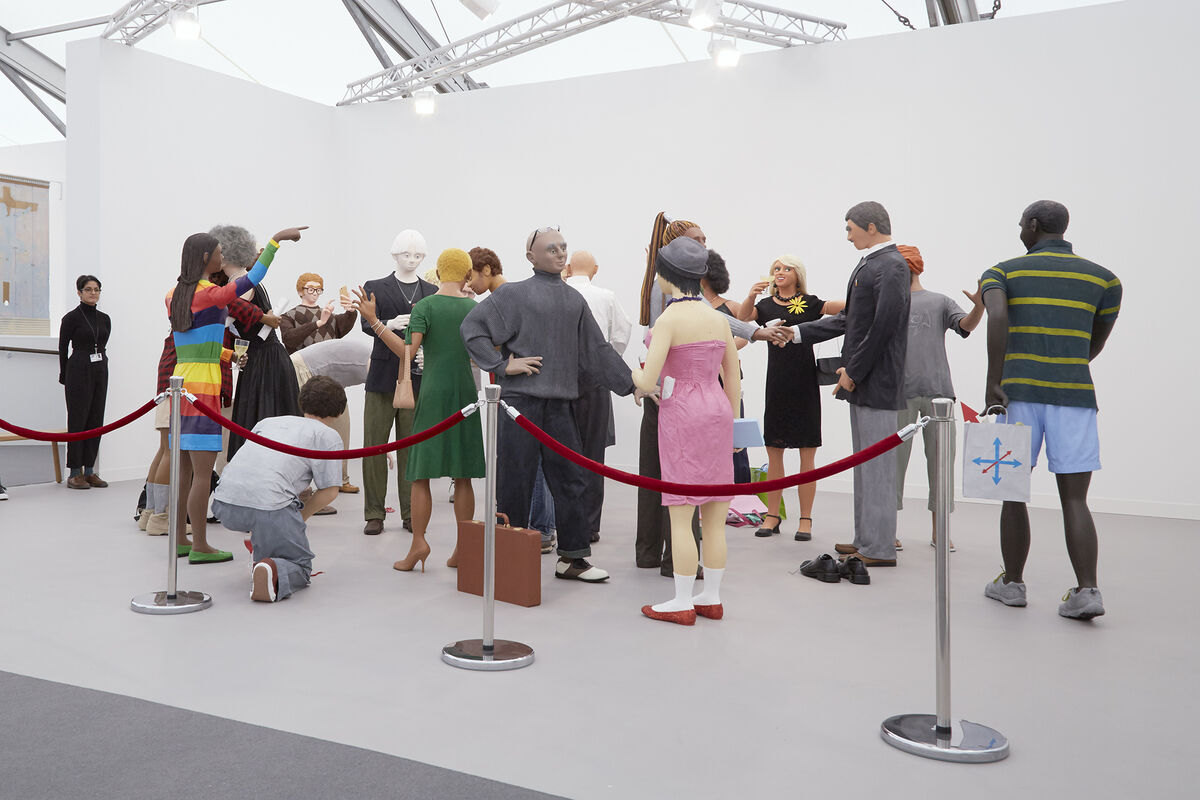 Advertisement
“It’s going incredibly well,” said fellow London mainstay Maureen Paley. The gallerist was keeping mum on what exactly from her booth had found its way into collectors’ hands (save for saying that “several” had). However, she noted that viewers and exhibitors alike were once again impressed by the “real sense of openness in the fair this year,” and the “generosity in terms of how everything was laid out,” no doubt thanks to continued refinements brought to the fair’s layout by Universal Design Studio, the firm that revamped Frieze London last year.
Paley shows new work by Liam Gillick (currently with a show in her Bethnal Green gallery),
David Salle
,
Wolfgang Tillmans
, and current art–world darling
Michael Krebber
, among others. “I’ve known him for 30 years and I’ve been working with him since the ’90s, but he’s developing in a very strong way at the moment,” said Paley of Krebber. Of particular note of the works on show is a sculpture, Pitch (2014), by photographer
Anne Hardy
, who is “at an exciting crossroads,” according to Paley. The artist, who has long photographed models and staged environments, recently began displaying these structures as sculptures in and of themselves, as well as experimenting with works employing audio. Outside of Focus, Frieze London’s section for young galleries and emerging artists, new media gets relatively little play in 2015. Pilar Corrias, whose gallery is among a handful to show video, sold most of her solo booth of works by Ken Okiishi. The works—single screens priced at $35,000 and diptychs at $50,000—pull their source material from ’80s VHS tapes and more recent television series, which play on flat screens swiped with expressive brushstrokes. “The simplest way you can record a gesture is by making a brushstroke,” said Corrias. “Another is through video. But both the brushstroke and the footage don’t convey the reality of the movement. Nothing is adequate.”

Corrias’s early success aside, the majority of work at Frieze this year falls well within the dominant art world trends of the moment: loose and line-driven figuration, ceramics, and remixed readymade sculpture perhaps the most prevalent among them. The fair remains undeniably fresh–faced in the works it puts forward. But it’s also high on pedigree—like London, more a young royal than the rough-necked renegade it once was. On one hand, that appearance could be due to the complacency that the art world’s proliferation of highly curated presentations, new young artists, and recently rediscovered old ones can quickly induce. But there is also a demand-side component that—along with the rising tide of the market that pushes prices for young contemporary ever higher—would indicate that this is a real, rather than perceived, shift. 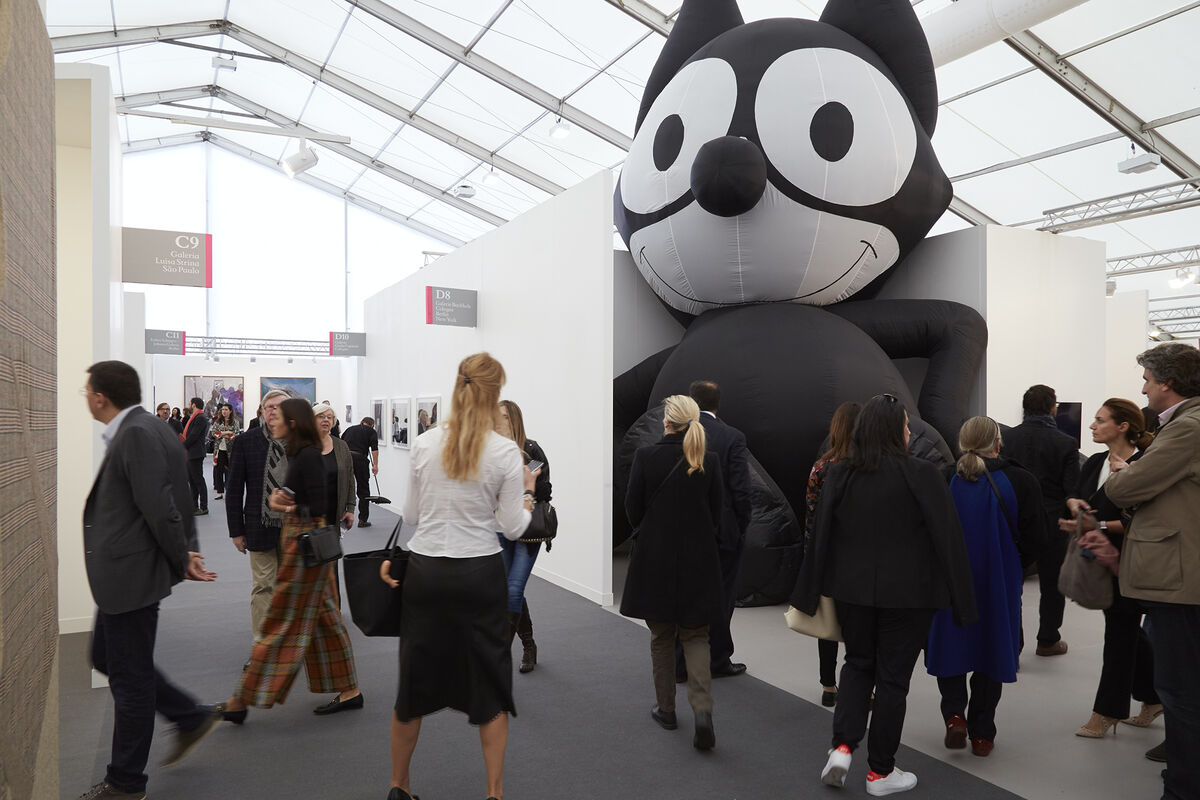 “Frieze was very cutting edge in the beginning. I came here to look at things that were so advanced compared to what you would see at Basel or FIAC,” recalls French collector Sylvain Levy, standing across from ShangART’s booth. “But now, the people are asking for something different. In times like we are currently in, which are not so easy, people are looking more to be reassured than to be challenged.” That means artists with a solid lineup of upcoming museum and gallery shows and a certain level of market momentum, among other factors often pitched. “The median price of contemporary art is quite high now. So it’s not just an impulse buy,” Levy continues.

Some would likely want to mark this as a failing on Frieze’s part, but it’s not. Frieze remains the most variegated of the blue chip fairs—by far. It is cutting edge, but it’s cutting edge at a time when everything, from the High Street to Regent’s Park, is a little bit more the same than it once was.
—Alexander Forbes
Explore Frieze London 2015 on Artsy.
Related Stories