In a New Play, Sibylle Berg and Claus Richter Imagine a Future World Where Robots Rule

The daunting news that global unemployment might reach 200 million people by the end of next year may be the last thing on anyone’s mind as they explore Frieze London. But one of the most recognized writers of the German-speaking world, Sibylle Berg, has put the problem center-stage.
Wonderland Ave (2016) is an experimental play premiering at Frieze London as part of the fair’s Projects series. The punchy, 20-minute production speculates about what will happen to all the unemployed and unwanted refugees after a fourth industrial revolution. In Berg’s first collaboration with Cologne-based artist
Claus Richter
—who is best known for his playful sculptures and installations that mimic fictional childhood settings—the duo has created a dystopian scenario in which robots run our lives. The two were introduced by the new curator of Frieze Projects, Raphael Gygax, and asked Sebastian Nübling to direct the play.

Although the story of machines lording over the world is far from new—see
Rainer Werner Fassbinder
’s World on a Wire (1973), the Terminator franchise, or more recently, Josh Klein’s show at 47 Canal this past May—this scenario includes elements that do feel novel. It’s presented inside a cube-shaped modular living unit, for example, which resembles an odd combination of an insane asylum and a dollhouse.
The two men that cohabit this tiny space have grown purposeless, misanthropic, and sentimental for the good old days. They live in a time and place where robots micro-manage their every waking minute and monitor their every word. In a conversation between the two men with the blue-eyed androids that tower over them, we learn that “the redistribution crisis did not end well.” The Earth’s sandy beaches have been cemented over, the oceans have disappeared, and human reproduction (and sex) is out of the question. 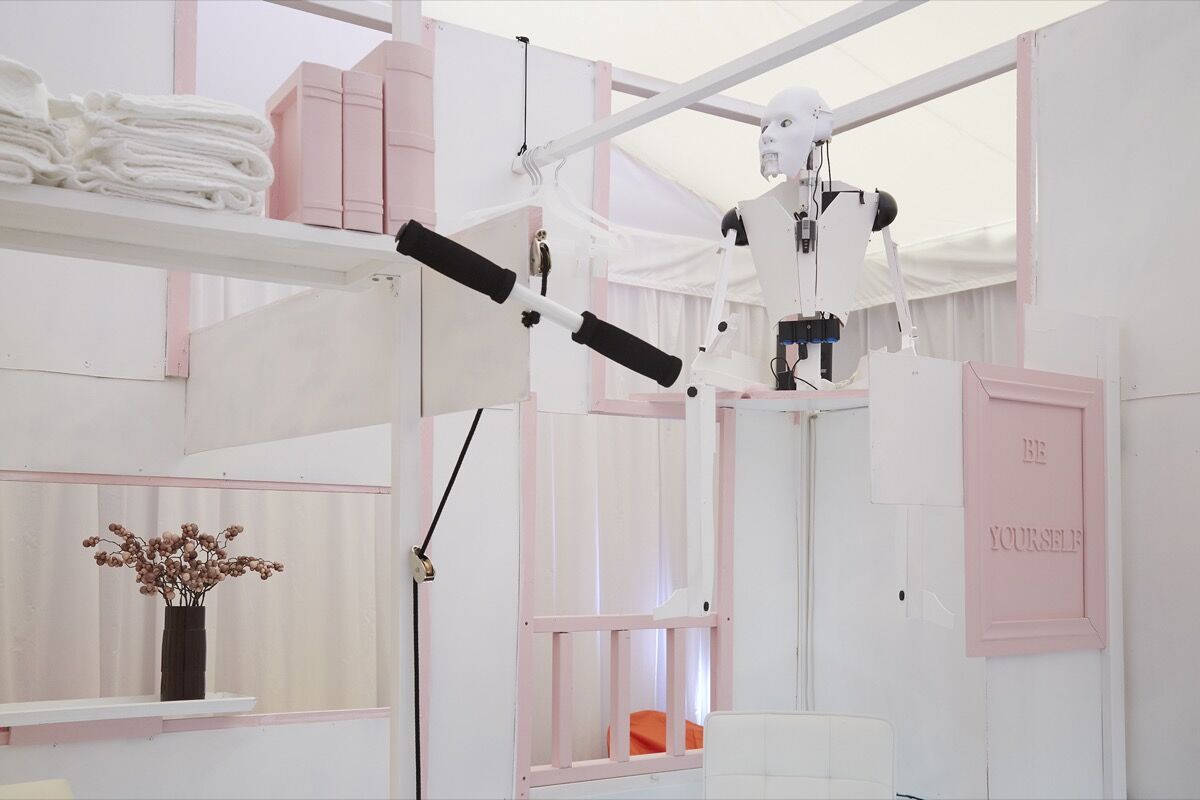 Advertisement
Inside Richter’s set, motivational, neoliberal mantras such as “smile,” “think positive,” and “just be better every day” hang on the walls. These are occasionally repeated by the men, who appear to be more robotic and less human than the artificial intelligence—who like to throw a few jokes around. Whether this scene is paranoid or prophetic remains to be seen, but it would, perhaps, do better in front of a wider audience. “I would love for it to go beyond the fair,” Berg says. “We are actively exploring options with multiple theaters and hope to see it one day in the West End and Broadway.” What you get at Frieze is only a short version of a much longer play.
This is not the first time that Berg and Richter have crossed over to other disciplines. Berg, who has written 20 plays and 12 novels, admits that she has been taking inspiration from TV, film, fashion, science, politics, and contemporary art for some time now, while Richter is equally fond of cross-pollinating mediums. “Playing and staging are two very liberating activities for me,” says Richter, adding, “I find it very rewarding to leave my comfort zone.”
—Laurie Rojas
Related Stories