From Pierre Huyghe to Camille Henrot, Artists Mine the Loneliness of Our Digital World 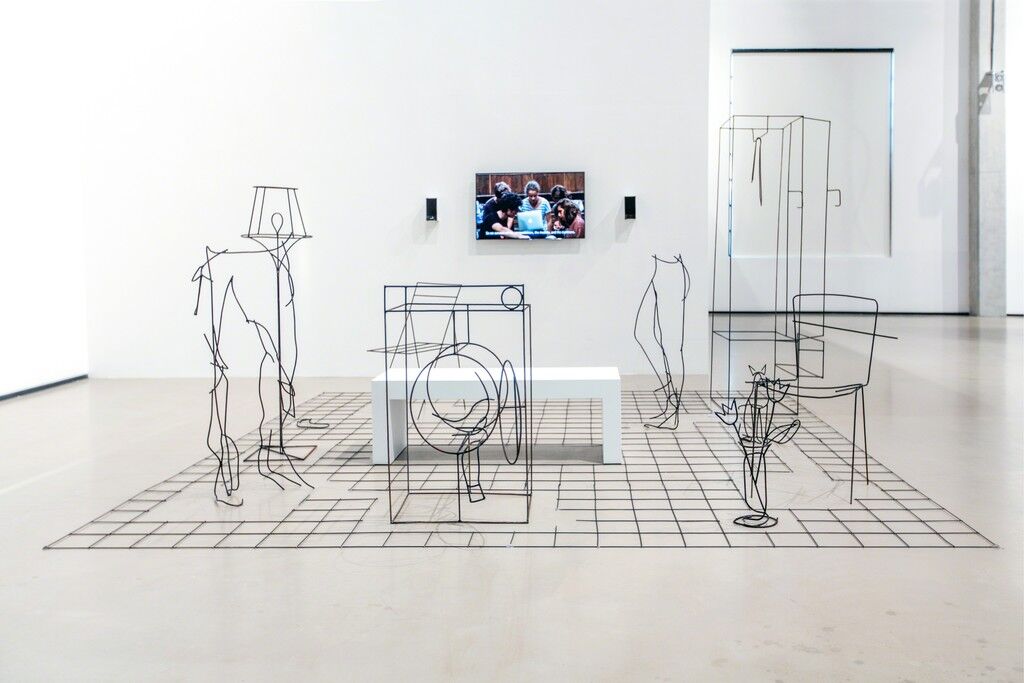 Neïl Beloufa
Data for Desire, 2014
Yarat Contemporary Art Space
In Carson McCullers’s literary masterpiece The Heart is a Lonely Hunter (1940), we are invited into a story about overcoming isolation in the Deep South. One of the novel’s central characters, John Singer, is a deaf-mute who struggles with the everyday difficulty of communicating. Singer’s relationships are often one-sided and lack the emotional and expressive outlets he so desperately desires—a phenomenon paralleled by the experiences of several characters in the book, including a girl named Mick Kelly, a friend of Singer’s who longs to be a musician. She also finds connecting—to peers, classmates, and even lovers—to be no easy task. In many ways, The Heart is a Lonely Hunter is a treatise on the everyday remoteness of people in close proximity.
In an exhibition at the YARAT Contemporary Art Centre in Baku, Azerbaijan, curators Michael Connor and Suad Garayeva take McCullers’s portrayal of the human condition as a harbinger of the lonesomeness that occurs on the internet. However, their exhibition, which takes the same name as the book, reconsiders the struggles of Singer and Kelly via 13-some works, many of which focus on the ways bodies are represented on screens and through networks, effectively establishing a discourse around the pursuit of companionship within decentralized communities. 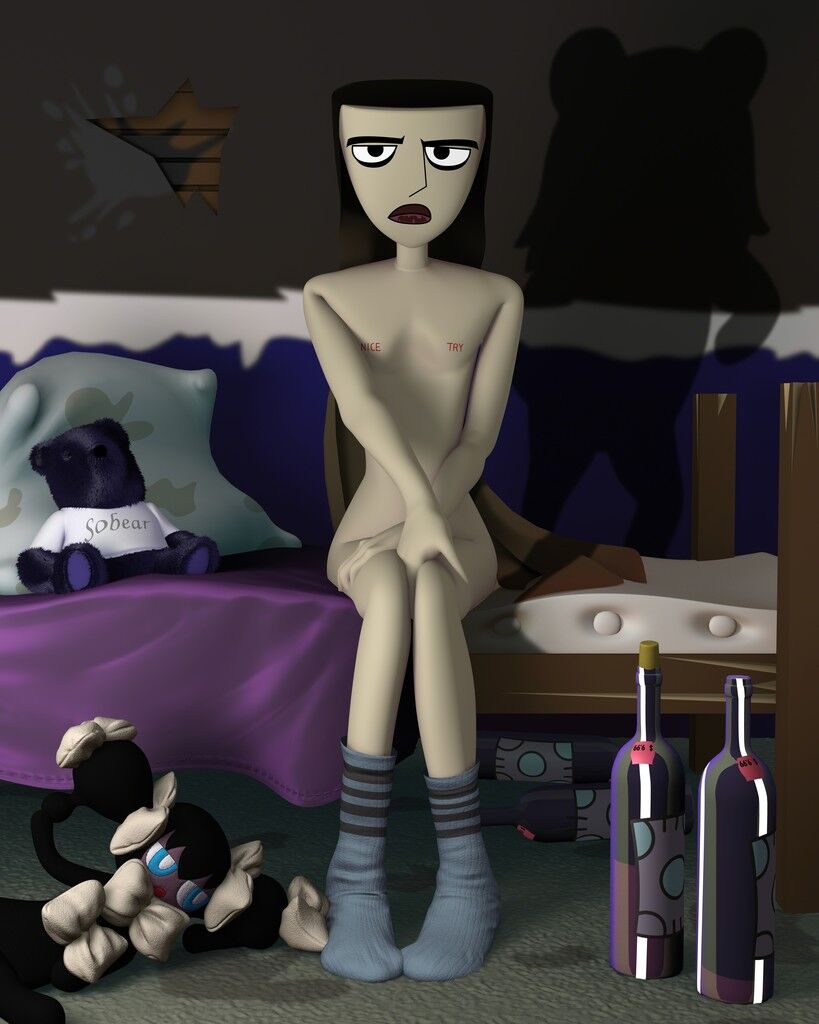 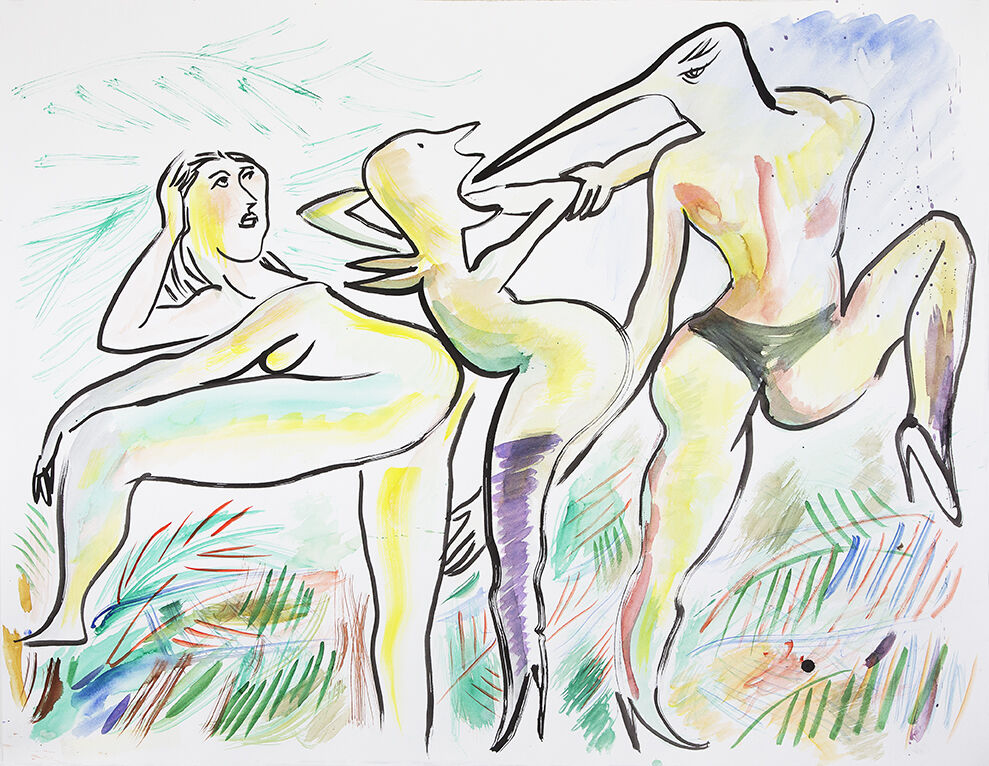 Camille Henrot
My Anaconda Don't, 2015
Yarat Contemporary Art Space
At the heart of the exhibition is No Ghost Just a Shell (1999-2002), a conceptual video-art project by
Pierre Huyghe
and
Phillipe Parreno
, in which the artists bought a stock female anime character and offered other artists an opportunity to appropriate her in their own work. Projects by
Neil Beloufa
,
Hannah Black
,
Camille Henrot
,
Parker Ito
,
Bunny Rogers
,
Jasper Spicero
, and
Lu Yang
revolve around the work, and several take it as a starting point for discussing the ways in which representations of the body construct and inform identity within networked culture. Though all the artists leverage the humanity that occurs in this context, Connor and Garayeva’s exhibition doesn’t try to convince audiences of the generosity of humankind. Rather, they explore the bittersweet reality that—regardless of our technological sophistication—many of us suffer from the same kind of deep melancholia felt by McCullers’s characters.
Garayeva says this best: “Despite what everyone would have you believe, you’re actually mostly alone when you’re connected to everyone online.” As she explains, the artists in the show are all “searching for something more, for some kind of social bond online—something to fight against a feeling of alienation.” 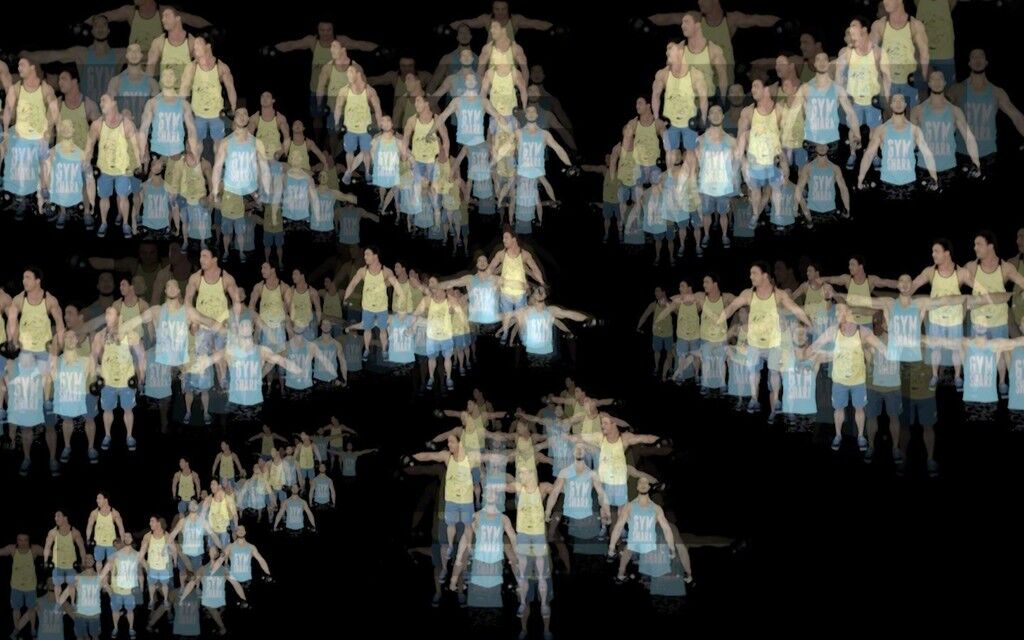 Hannah Black
Bodybuilding, 2015
Yarat Contemporary Art Space
Advertisement
For her contribution to the show, the artist Hannah Black created a new commissioned video work during an extended stay in Baku. In it, she juxtaposes evidence of the booming construction of the Azerbaijan capital—shots of new, vacant-looking buildings—with a similarly emerging community of Baku bodybuilders. Black’s video could be seen as a comparative analysis made by an outsider, but Garayeva would beg to differ: “She wanted to get really into something that at first might look vapid, but for her contains a lot of body politics for men that she would otherwise be very alien from,” she says. In doing so, Black suggests connections between her own body, the urban structures of Azerbaijan’s growing community, and a niche body culture—one redolent of the types of subcultures discovered online.
Artists in the show also employ the legacy of cinema as a means of exploring representations of bodies on screen. Cinema, Connor argues, turned “images into a nexus of different social relationships where power and privilege take part.” The affect of cinema used to be more mediated, but in more contemporary technology—in which viewers participate, rather than being passive recipients of the image—“the relationship becomes much more dynamic.” As a result, Connor believes, artists have become reinvested in images of bodies on screen. “Images play such an important role in social life, and it’s particularly interesting to look at images that look like people.” 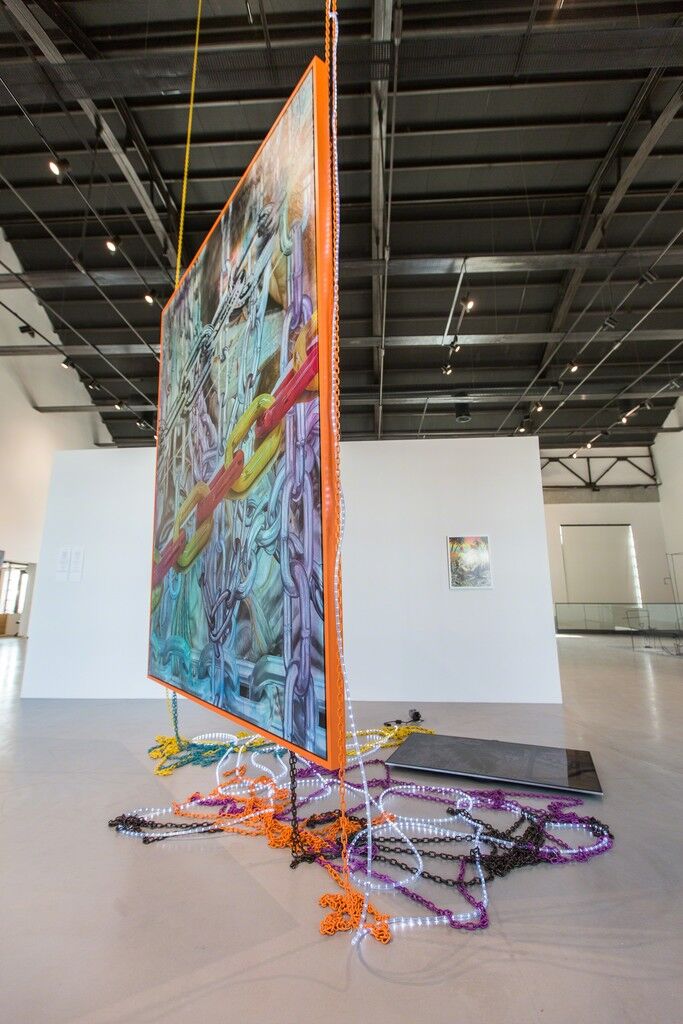 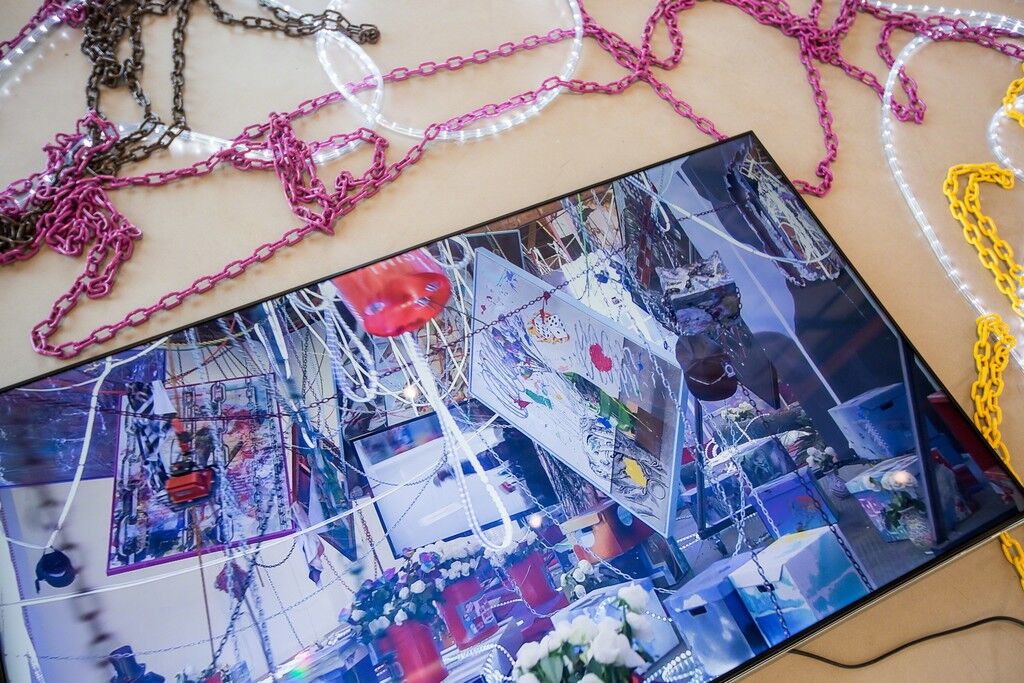 Parker Ito
A Lil' Taste of Cheeto in the Night, 2015
Yarat Contemporary Art Space
Exploring the social dimensions of images and playing with representations of people is best exemplified by the work of Parker Ito. His prolific riffing on stock images of a young woman used on parked domains (websites that exist only for the purpose of identifying that the domain is for sale) expresses a complex understanding of the social life of images. Ito also creates works that are deliberately difficult to photograph, employing materials, gestures, and pigments that often create unwanted glares. Thus the circulation of those works take on a life of their own, supplanting or enhancing the original work as a way of turning the painting itself into a networked experience. 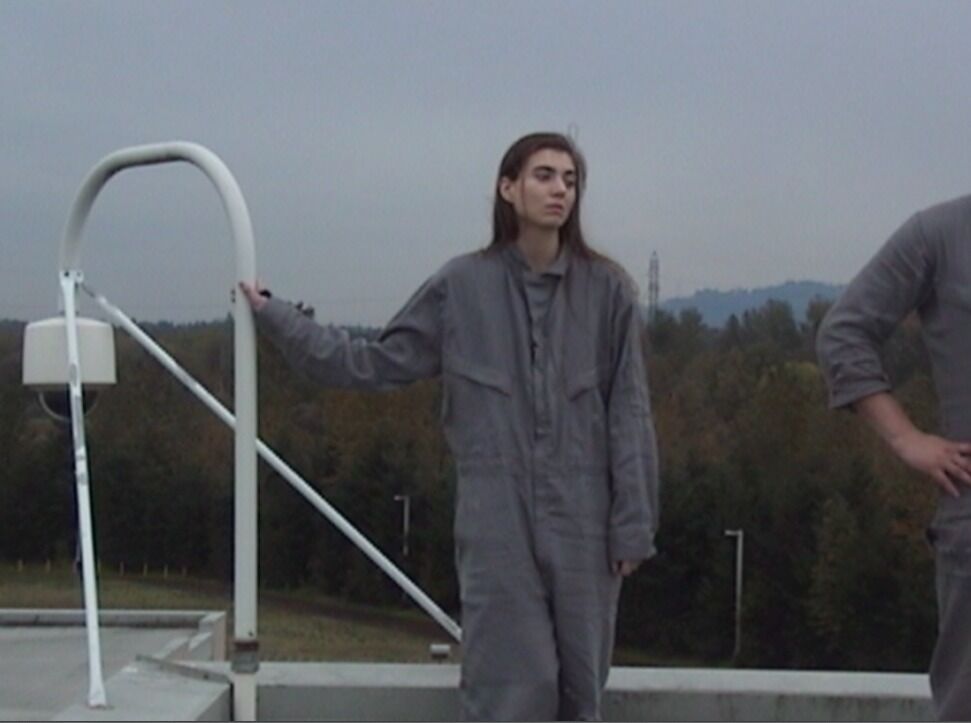 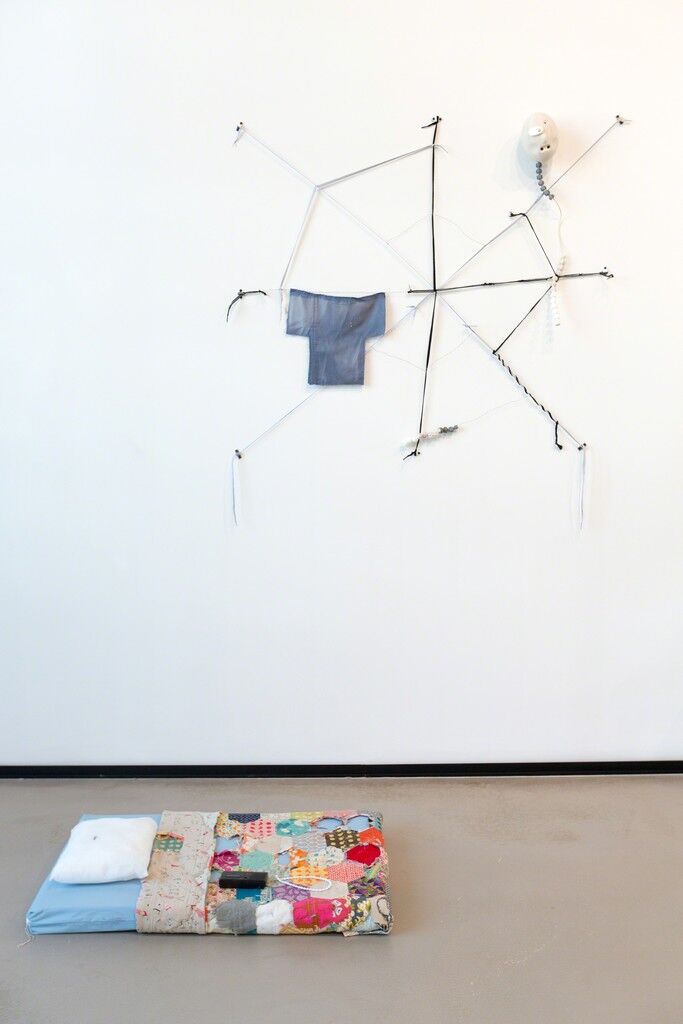 Jasper Spicero
The Heart is a Lonely Hunter, Blue Star, 2014
Yarat Contemporary Art Space
Not all artists in the show are as straightforward with their approach to representations of bodies on the internet, and for Jasper Spicero, the body only becomes significant when it is completely removed or absent from his images and installations. Though his quiet images and sculptural works suggest the presence of bodies, they are represented only through artifacts like orange peels and empty flower vases.
This is all to say that the various representations of bodies within a network are as diverse as the bodies themselves. “The Heart is a Lonely Hunter” (both exhibition and novel) posits that sense of multiplicity, and the inherent difficulties—and moments of transcendent connection—in finding common ground. One is left with the hope that in showing various attempts to stave off the loneliness of our efforts to connect, we won’t be quite so isolated.
—Nicholas O’Brien
“The Heart is a Lonely Hunter” is on view at YARAT Contemporary Art Centre Sept. 25, 2015—Jan. 9, 2016
Follow YARAT Contemporary Art Space on Artsy.
Related Stories