From Turrell to Hockney, 8 Artists Who Designed Extraordinary Swimming Pools

Abigail Cain
Aug 29, 2016 1:05pm
Few things evoke summer better than the swimming pool, its inviting blue water offering a respite from sweltering heat. Pools have also served as an unexpected medium for artists, including David Hockney, Katherine Bernhardt, and James Turrell. From filling them with diet soda to painting them with signature patterns, these eight artists have designed extraordinary—if not always functional—swimming pools around the world. Throughout his 50-year career,
Turrell
has become famous for manipulating the perception of light and space in mesmerizing installations. So it’s only fitting that, during a party to celebrate the completion of Baker Pool in 2008, a discombobulated guest unwittingly walked down the stairs and straight into the water; Turrell himself pulled her out. The LED-lined pool, commissioned for the basement of a barn on a Greenwich, Connecticut estate, was the first such work the artist completed in the United States. A previous Turrell-designed swimming pool, built for a French cultural center, featured a central shaft that swimmers had to dive under to catch a glimpse of one of the artist’s signature skyscapes. 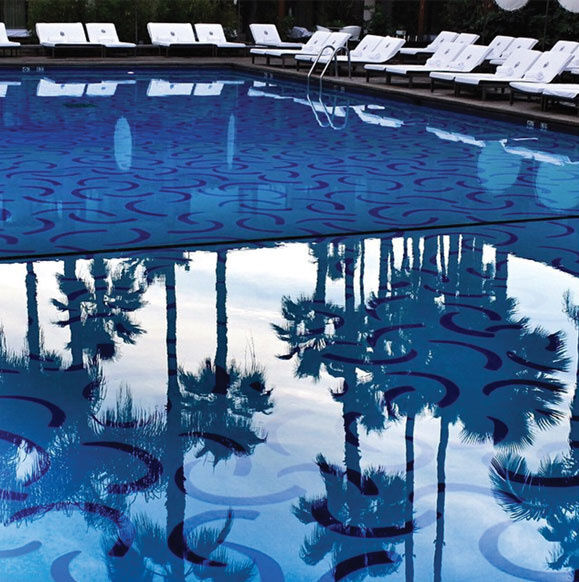 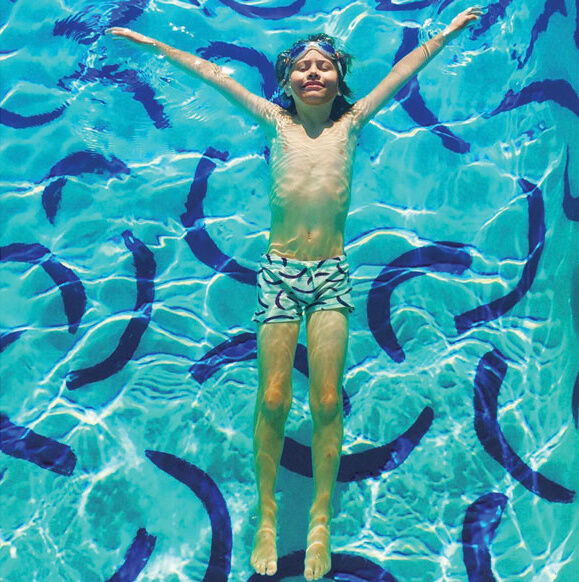 Advertisement
Known for his bright, airy paintings of Los Angeles swimming pools,
Hockney
occasionally used the real thing as his canvas. The most accessible example is located in Hollywood’s Roosevelt Hotel, where the artist spent one morning in 1988 covering the pool bottom with a pattern of swooping half-moon marks. Local officials attempted to paint over the underwater mural later that year, citing a state safety law that prohibited the decoration of swimming pools. Informed by a dealer that the work would likely be valued at $1 million, they quickly changed their minds and wrote a bill to exempt Hockney’s pool. The work remains intact to this day. 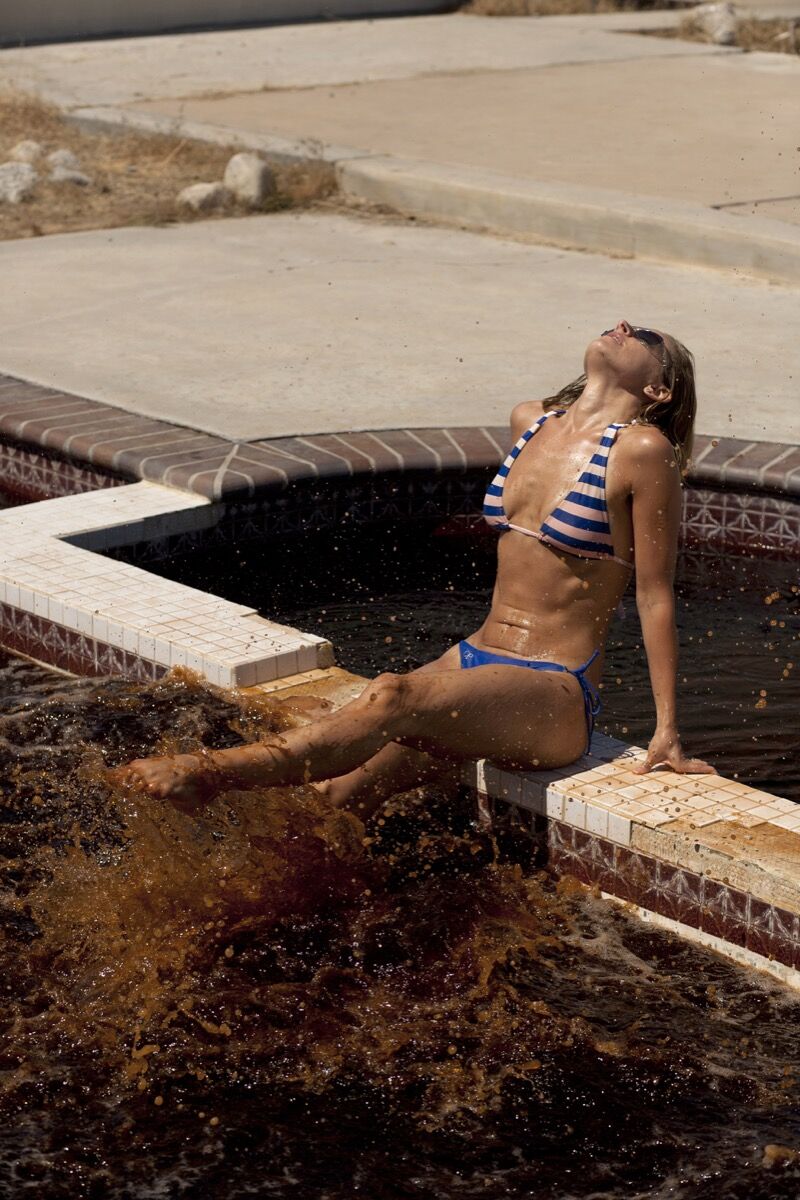 In the case of
Bouchet
’s Flat Desert Diet Cola Pool, it’s what’s inside that counts. In 2010, the artist filled an entire California swimming pool with Cola Lite, his homemade, sweetener-free soda, then invited a group of art-world denizens over to cavort in the syrupy liquid. Bouchet later repeated the experiment on the roof of Chelsea’s Hotel Americano, hiring two female bodybuilders to splash around while gallery-goers looked on. Both installations are part of a series employing Bouchet’s carbonated beverage as a medium; other works include watery brown canvases painted with soda (the artist terms it “colachrome”). 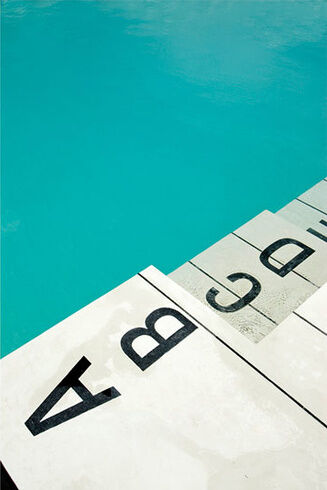 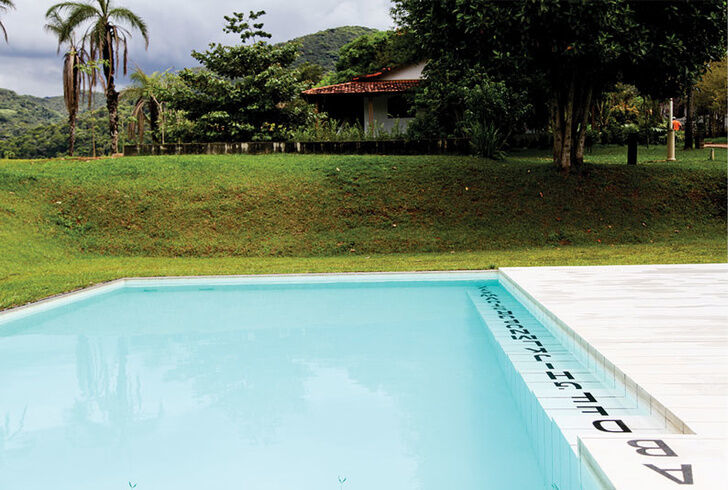 In the mid-1990s, Argentinian artist
Macchi
began a series of watercolors that merged several incongruous objects into a single image. In one, a sheep stands on legs made from burnt matchsticks; in another, the alphabetic tabs of an address book have been transformed into a bench for a seated figure. The latter served as the inspiration for Piscina, realized with the help of Brazilian contemporary art museum Inhotim. One half of the work is crafted from smooth white cement cut with strips of black granite, forming a monumental sheet of lined paper. The pool’s focal point, however, is the staircase of index tabs that descend into the clear blue water. 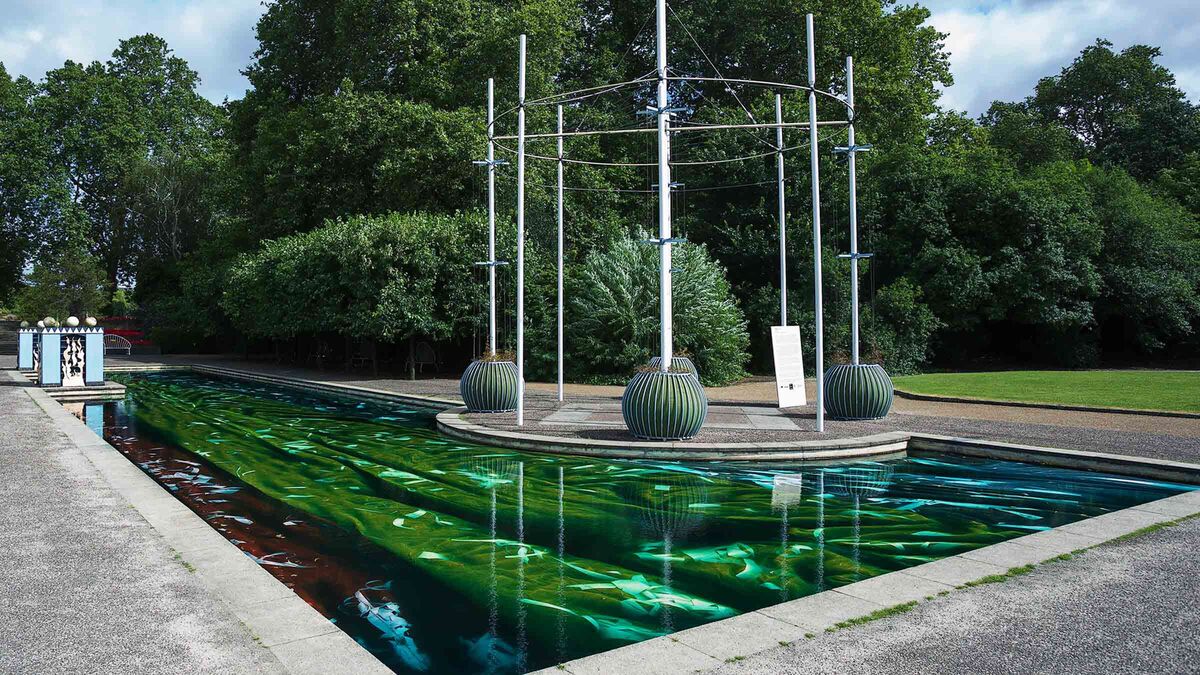 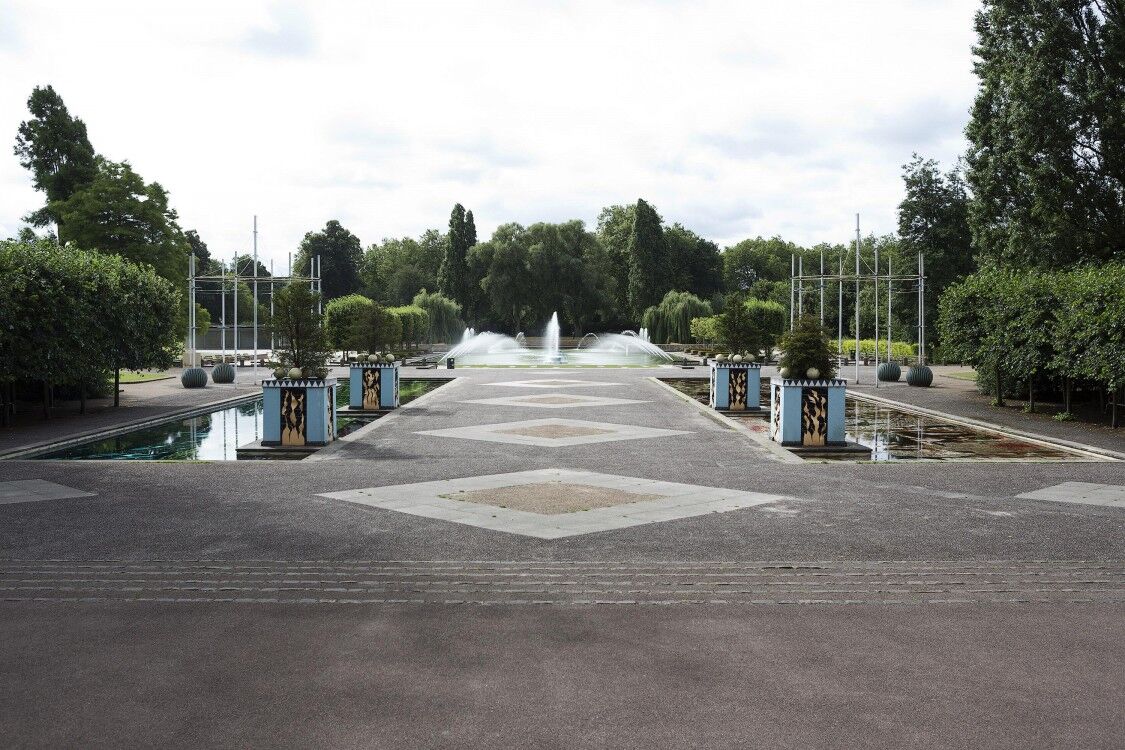 Much of this young British artist’s work is liquid-based, although one would be ill-advised to take a dip in one of
Scott
’s pools. For last year’s edition of Frieze, she gouged large holes in the floor and filled them with an arresting hodgepodge of ingredients: water, cooking oil, fabric softener, wax, even food. This month, she has unveiled her largest project to date—a commission in London’s Battersea Park, on view through September 25. Scott has transformed the park’s two Pleasure Garden Fountains, adding multicolored dyes and swaths of fabric that undulate beneath the surface and engage with the area’s industrial past. 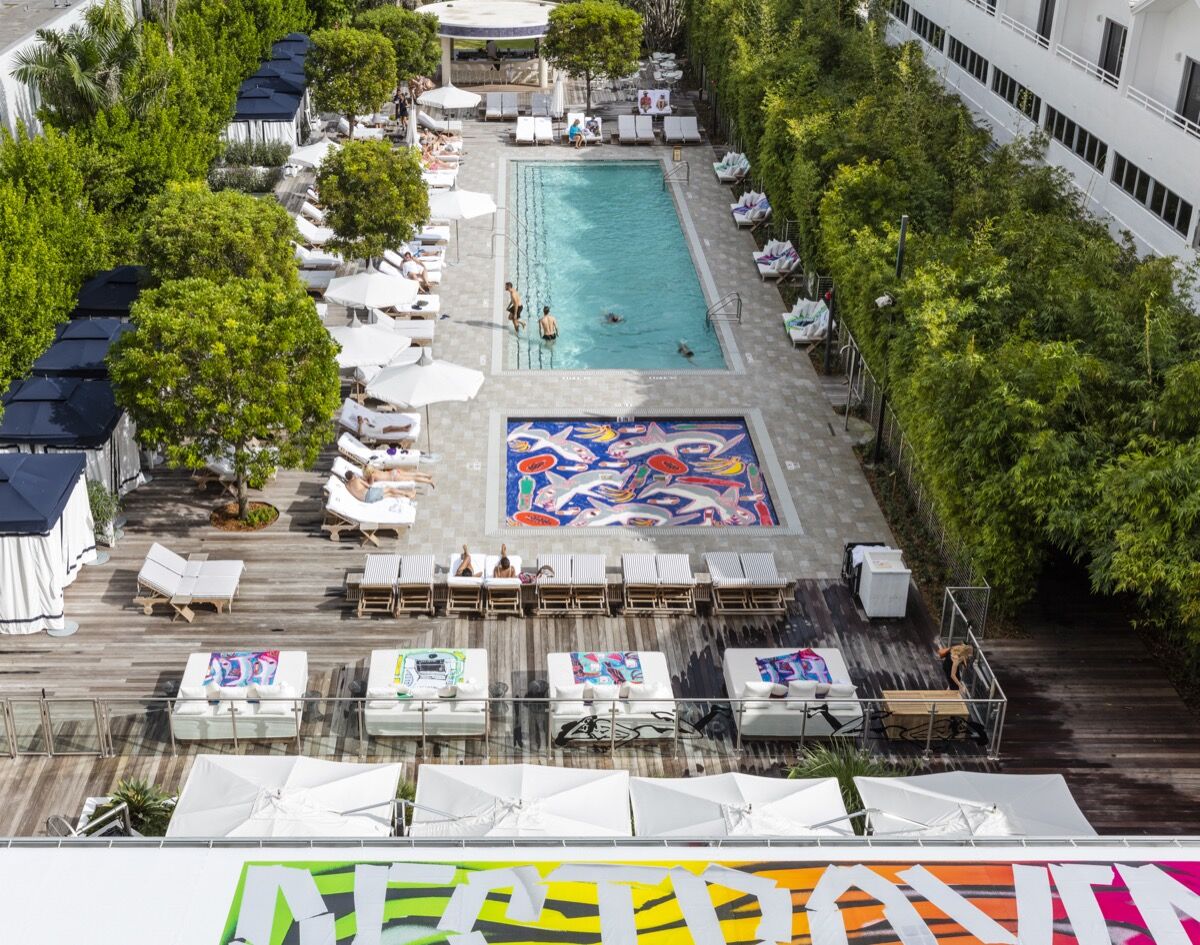 Photo by Silvia Ros for Artsy.

Bernhardt
’s pool design during last year’s Art Basel in Miami Beach gave visitors to the Nautilus, a SIXTY Hotel, a chance to swim with sharks—plus the socks, bananas, and Sharpies that also peppered her pool-bottom mural. The project, commissioned by Artsy for Nautilus, also featured Bernhardt-crafted towels printed with toucans and French fries. Both works serve as prime examples of the New York-based artist’s signature iconography: a mix of tropical imagery and city-dweller staples, all rendered in bold, bright color. 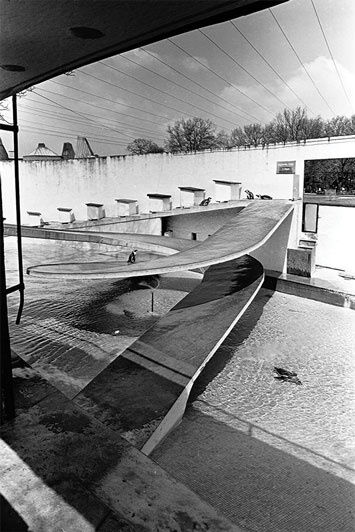 Image by Gillfoto, via Wikimedia Commons. 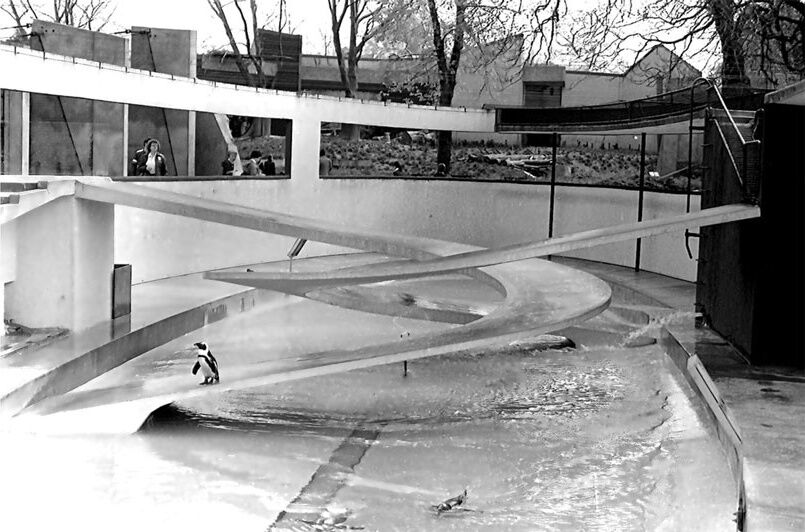 Image by Gillfoto, via Wikimedia Commons.

This one is literally for the birds. Lubetkin, a Georgia-born, Paris-trained, Russian architect, designed this pool for the penguins at the London Zoo in the 1930s. It was a prime example of pre-war Modern architecture, earning Lubetkin international praise and establishing his firm’s reputation as pioneers of the movement. The pool’s distinctive looping, interlocking walkways were meant to highlight the penguins’ waddling gait. Years later, it was discovered that the sloping paths were in fact giving the birds arthritis in their feet. The animals have since been shifted to another habitat, although Lubetkin’s pool remains—it is now classified as a water feature. 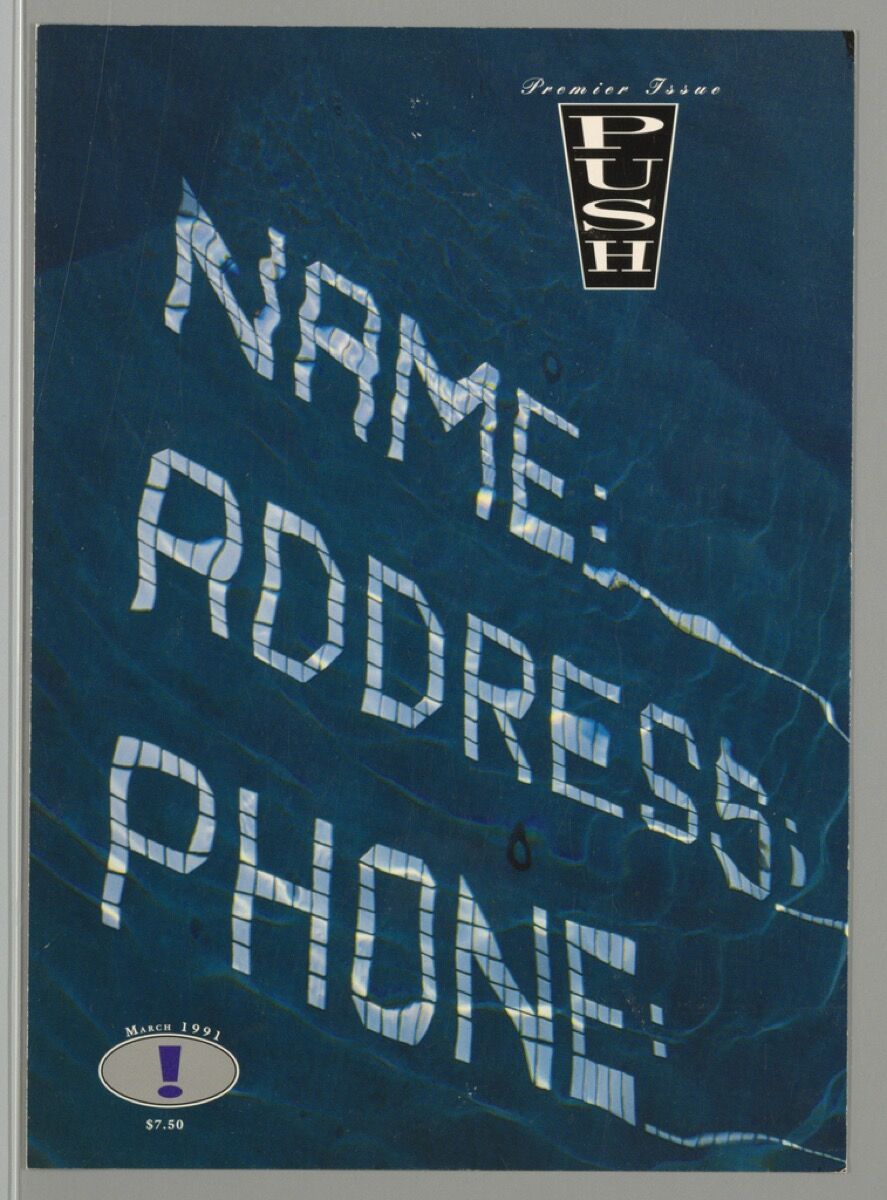 Photographed for the first (and only) issue of PUSH! magazine in 1991, this
Ruscha
-designed swimming pool features one of the L.A. artist’s signature text-based works. White tiles are arranged to create an underwater registration form, confronting swimmers with blanks for their name, address, and phone number. Ruscha, who made the work for his brother’s Studio City home, said he considered distorting the words so that they would straighten out when viewed through the water. In the end, however, he decided against it—“that would have been an expensive experiment,” he recalled.
Abigail Cain
Related Stories