Artsy Editors
Nov 6, 2015 5:55pm
Now in its 24th year, the IFPDA Print Fair has long been a one-stop shop for the best in the world of editions, from brand new works by leading contemporary artists to rare historic finds. Often, many of the works on display won’t be found at other art fairs, where non-editioned paintings and sculpture tend to take the spotlight. And similarly, much of the art has a more manageable price point—fantastic works can be had for under $10,000. But that’s not to say that you can’t go over the million-dollar mark with an edition. Below we highlight some of our favorite finds, across price points, at this year’s fair. 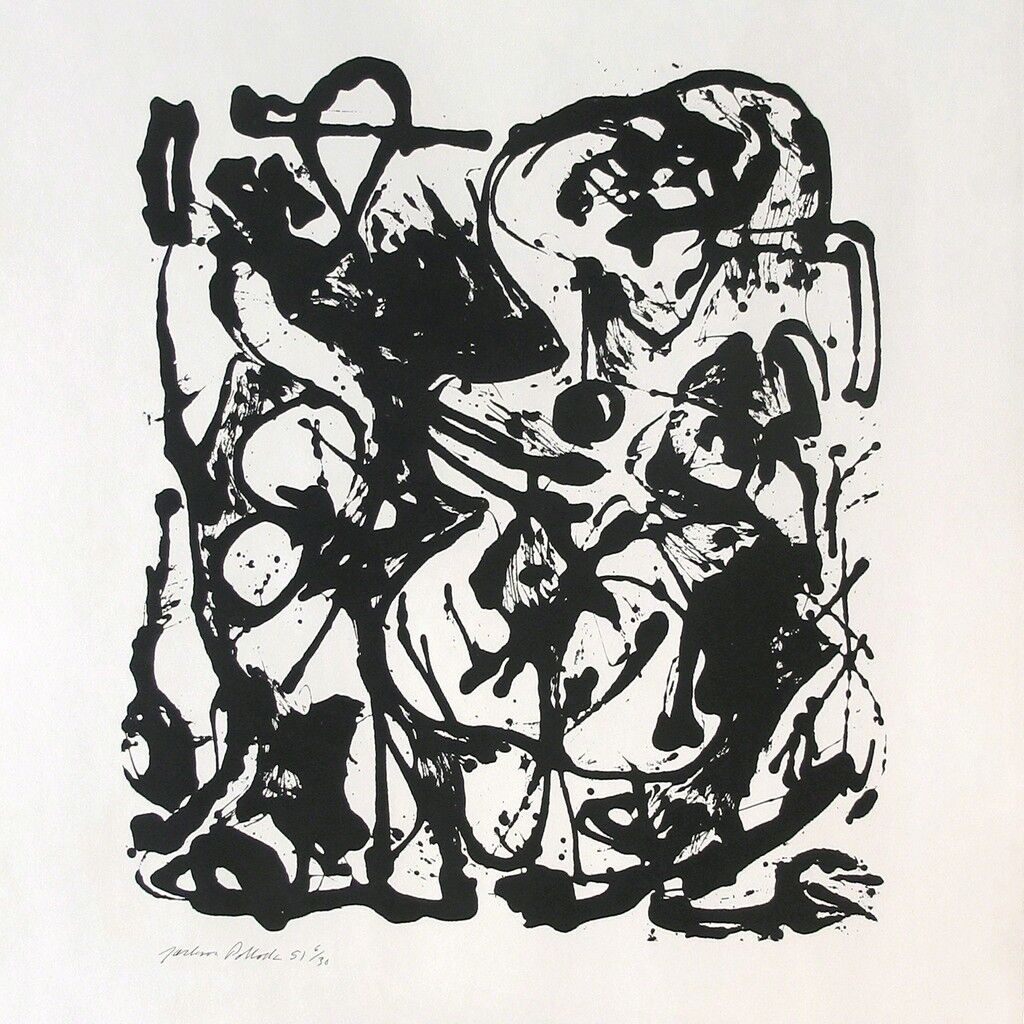 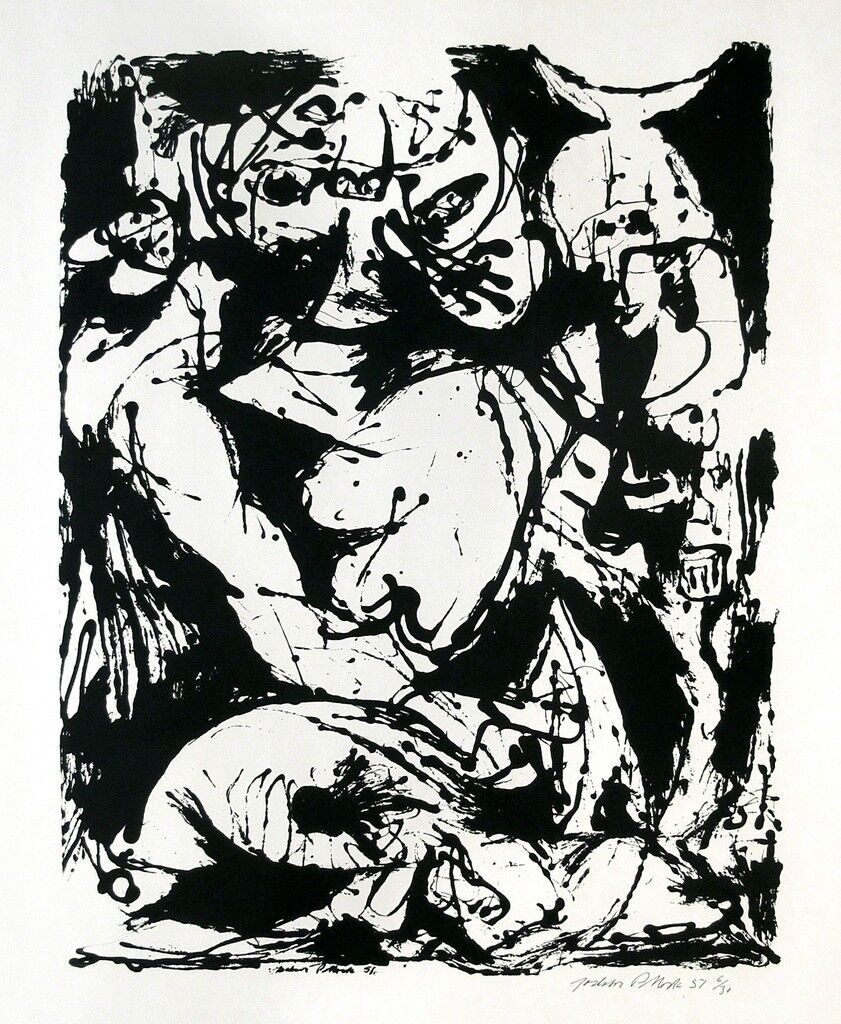 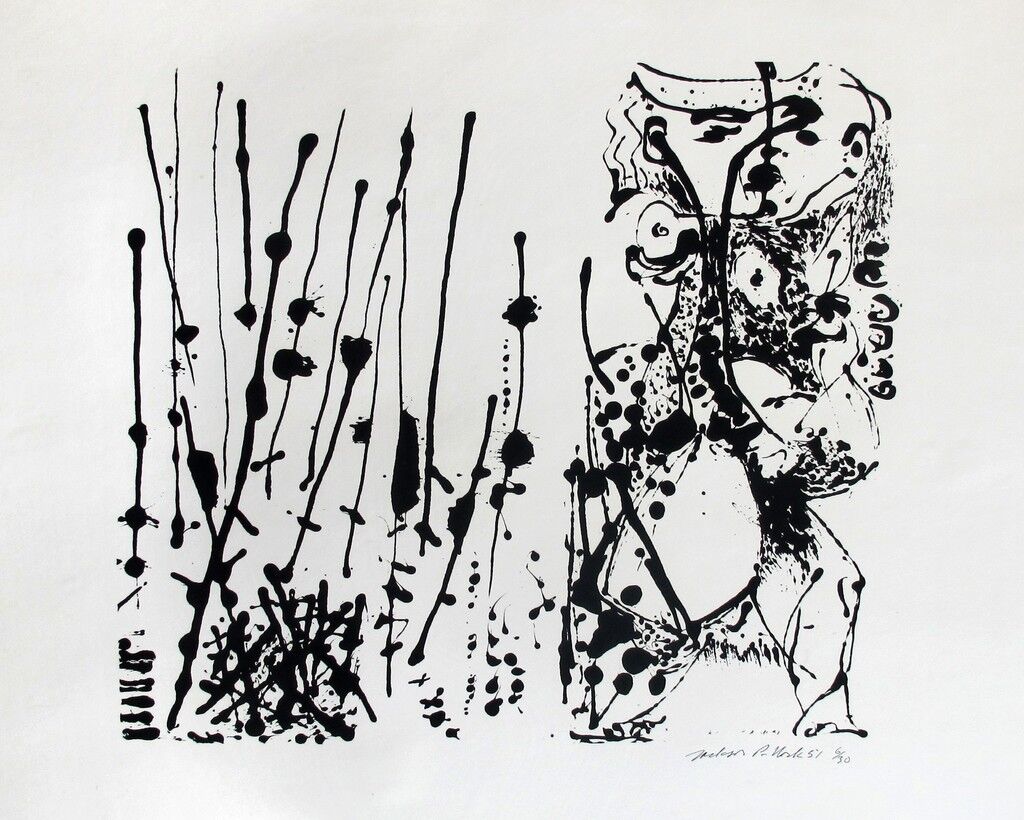 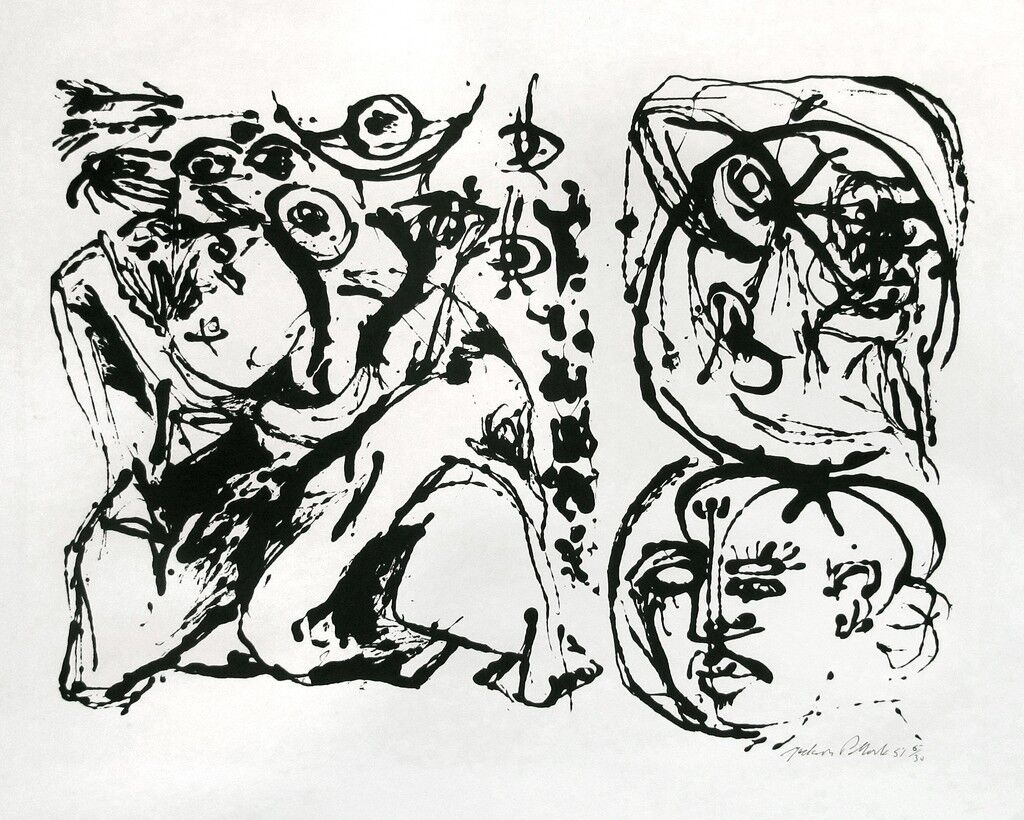 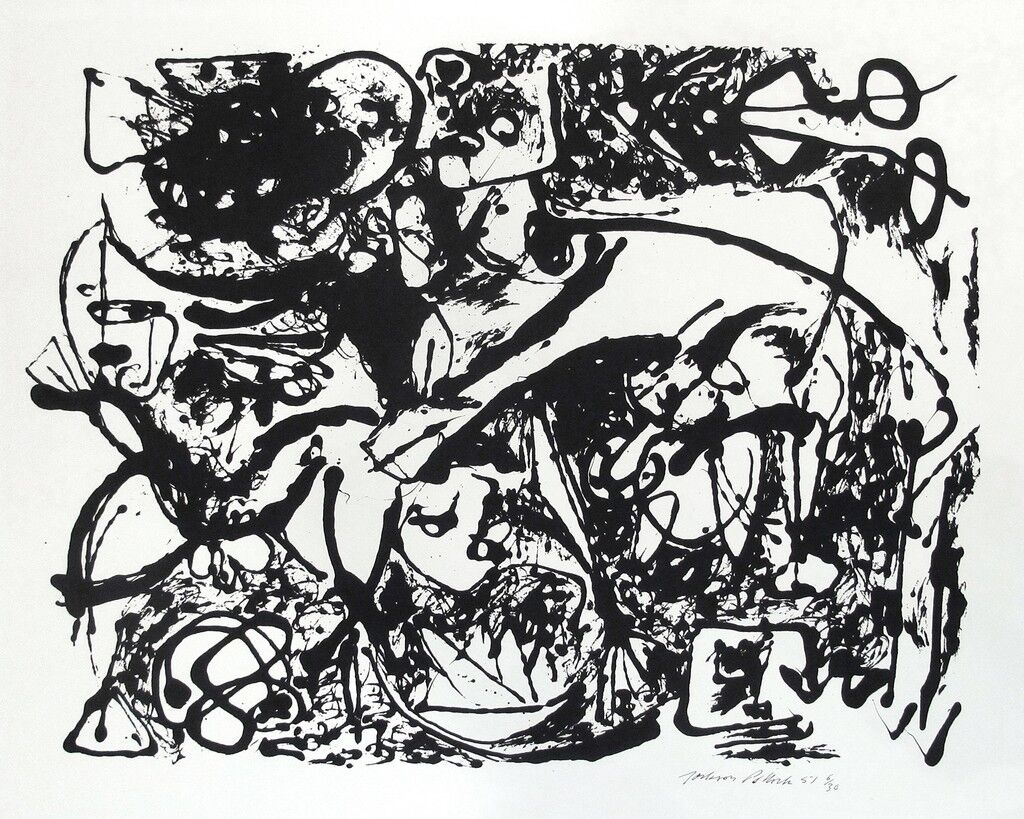 Jackson Pollock
Untitled, 1951
Childs Gallery
The explosion of ink on these intensely energetic prints catches the eye from several booths away. Pollock didn’t make a huge number of prints, so it’s rare to find them, particularly those produced during his lifetime, explains gallery president Richard Baino. The artist created this set to accompany an exhibition of his similar black enamel paintings at Betty Parsons Gallery in 1951. Another set from the National Gallery of Art’s collection was recently on view at Tate Liverpool in “Jackson Pollock: Blind Spots.” 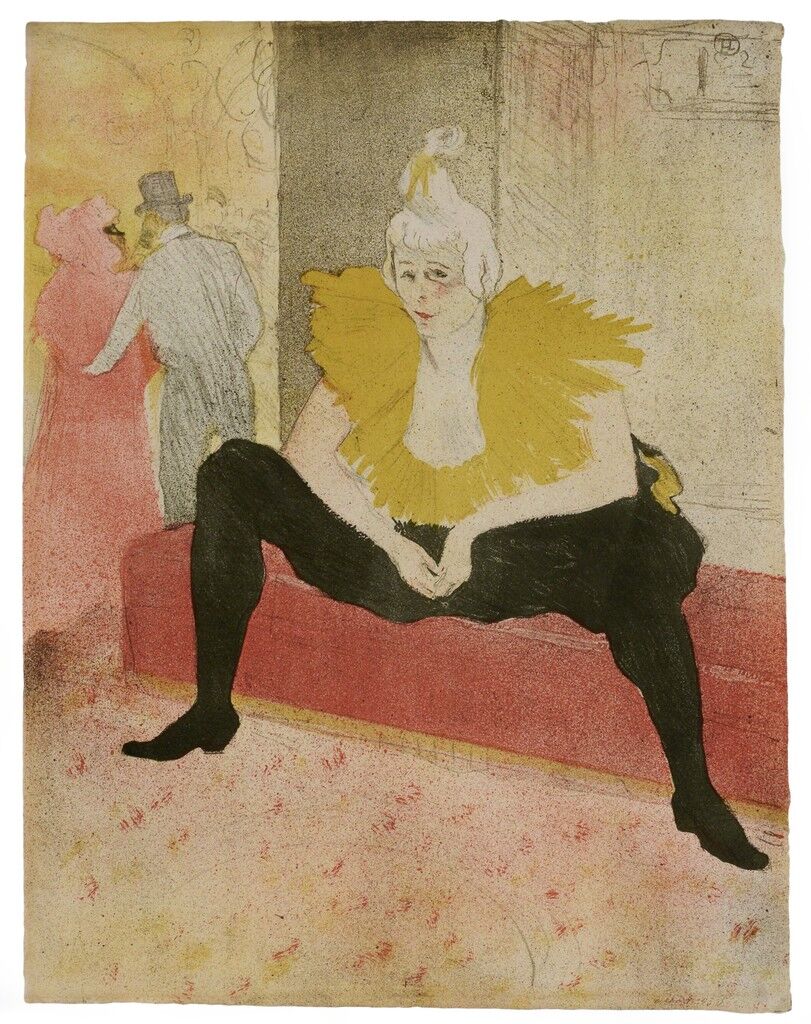 Henri de Toulouse-Lautrec
The Seated Clowness, 1896
David Tunick, Inc.
Advertisement
Velvety and fresh even after 100 years, this print shows the clown and dancer, Cha-u-Kao, as she takes a moment away from the crowd. The Montmartre performer was one of Toulouse-Lautrec’s favorite subjects—a painting of her sold in the A. Alfred Taubman collection at Sotheby’s on Wednesday for around $12 million—but this image captures a sense of intimacy that not all of her representations possess. Another print from this edition is in the collection of Metropolitan Museum of Art. 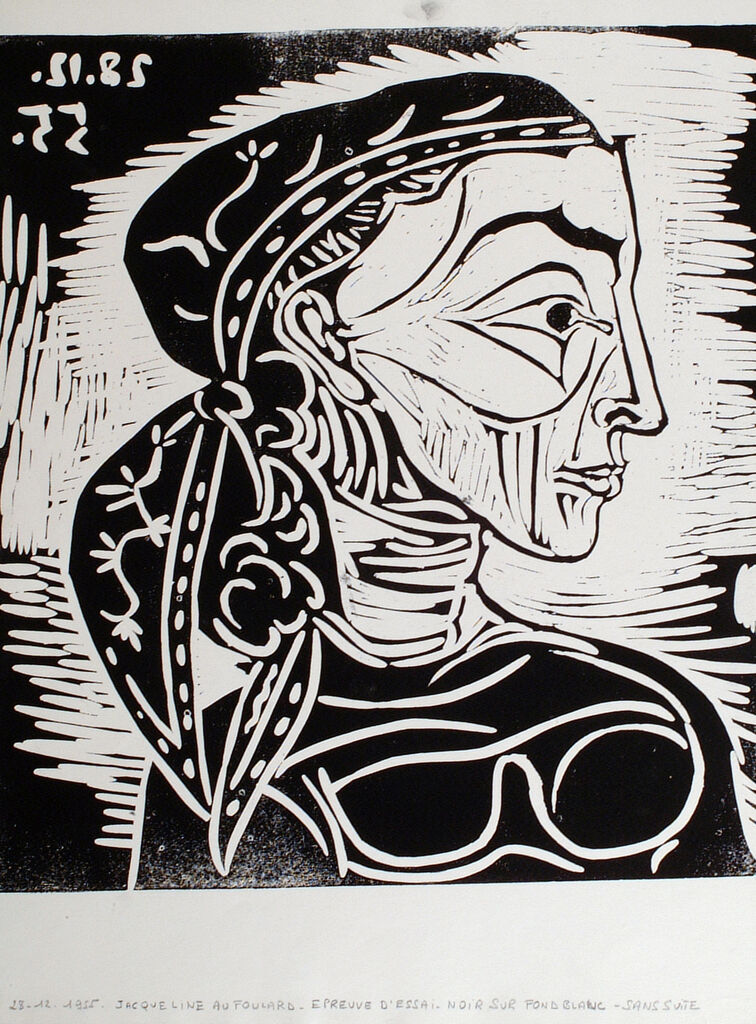 Pablo Picasso
Profil de Jacqueline au Foulard, 1955
Frederick Mulder
Picasso was still mastering the linocut technique (cutting into linoleum) when he created this print of a new lover, Jacqueline Roque, who became his second wife in 1961. The lines that lovingly shape her angular face are not quite perfect, adding a level of intimacy to the portrait. This young, dark-haired muse was the subject of many of Picasso’s works, but this one feels especially charged. She’s muscular and powerful, yet still submissively shown in profile.

Alberto Burri
Mixoblack, 1990
Mixografia
The subject of a stellar survey on view now at the Guggenheim Museum, Italian abstract painter Burri is best known for his raw abstractions—ripped, charred burlap; melted, blistered sheets of plastic. But later in his life, in the 1980s and ’90s, he transitioned to a more minimalist style, producing stunning paintings that remained visceral and textured, though more subtly. An extension of his late paintings, these monochromatic black prints on paper use soft shifts in texture and saturation to build graphic, geometric forms across the set. Burri split his time between Rome and Los Angeles, where he produced this edition with his friends at Mixografia. 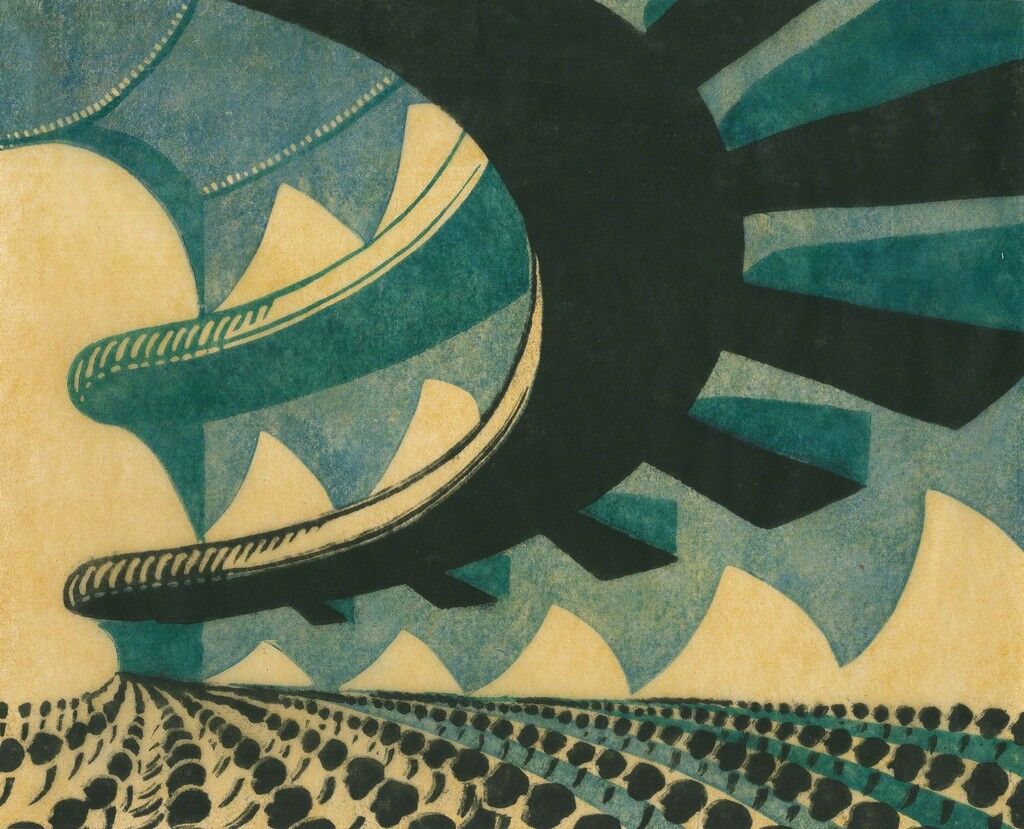 Sybil Andrews
Concert Hall, 1929
Redfern Gallery Ltd.
In Andrews’s early 20th century print, the way the bold, graphic architecture of the concert hall fills the frame feels strikingly modern. Like her fellow Grosvenor School artists—“the English Futurists, really,” says gallery director Richard Selby, Andrews only worked in the medium of linocut, “to make it accessible to the masses.” The image is hand-pressed, meaning she applied pressure to the back the linoleum rather than running the image through a press. She had a sharp, modern eye, and the clean lines of the medium fit her vision. 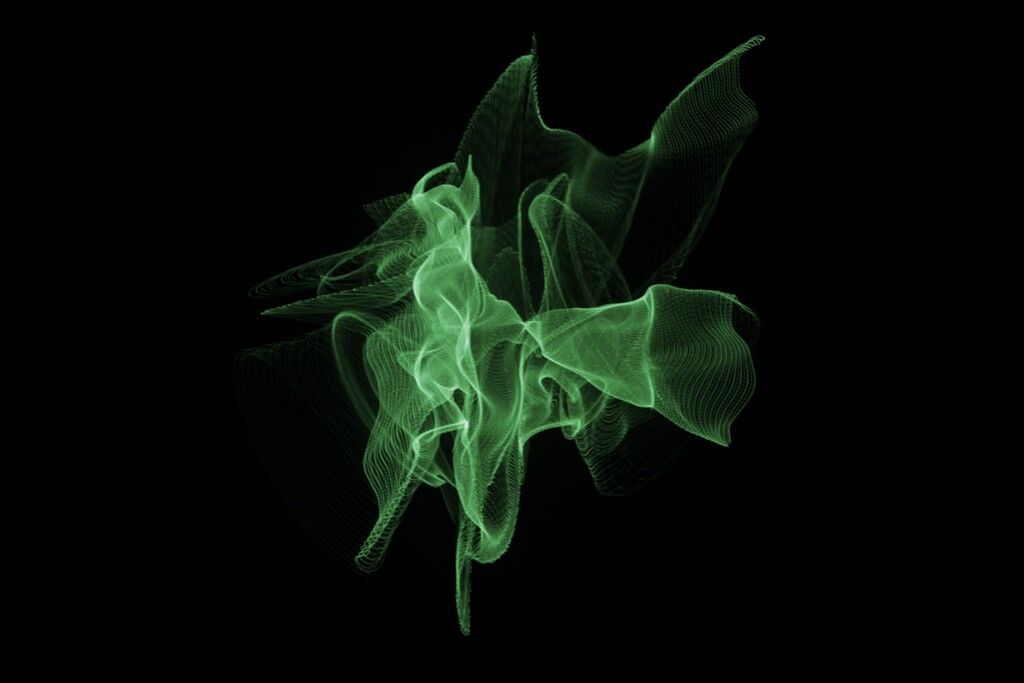 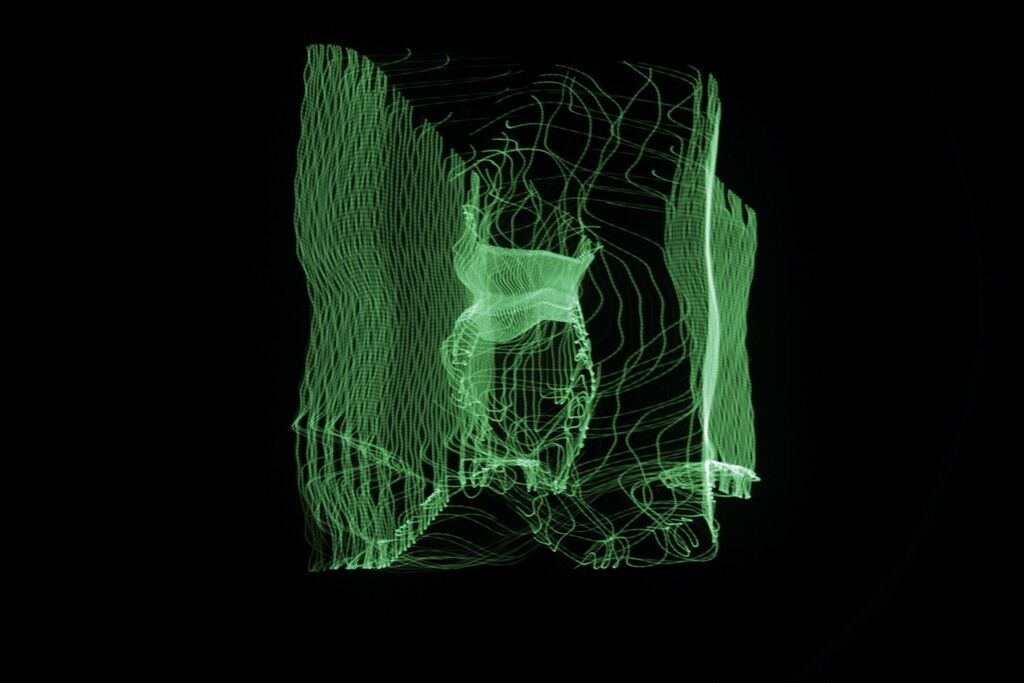 Gary Hill
Deflection drawing 4, 2015
World House Editions
Aside from the fact that these are the pioneering video artist’s first editioned photographs, it’s not entirely surprising to learn that these ethereal images are the work of Hill. His debut with the medium has yielded swooping, abstract neon forms, floating on black backgrounds, that resemble bioluminescent creatures or sound visualizations. But they are in fact images captured on screen and altered, by Hill, with something called a video synthesizer before being printed. Part of the excitement is that there is otherwise nothing in this price range for a work of art by the artist, who is one of the more accomplished video art practitioners out there.

Sarah Sze
Ripe Fruit Falling, 2012
Barbara Krakow Gallery
The fact that an installation artist can translate something so connected with three-dimensional space into a largely two-dimensional edition is pretty extraordinary. Sze has captured both the fragility of her sculptures and the fractal-like building process they undergo in this beautiful vertical wall-hanging. The edition takes its name from one of Sze’s celebrated early installations, shown at MoMA PS1 in the late 1990s.

Guston collaborated with Gemini G.E.L. shortly before his death to create this body of prints, and they rarely surface on the market, says Joni Weyl. She also notes that the heads pictured are classic Guston, incorporating a variety of clues from his personal life. While the trademark cigarette is a reference to the artist himself, his wife is represented by the forehead and hair in the front right, while the bald head of legendary Gemini G.E.L. founder Sidney Felsen appears in back. 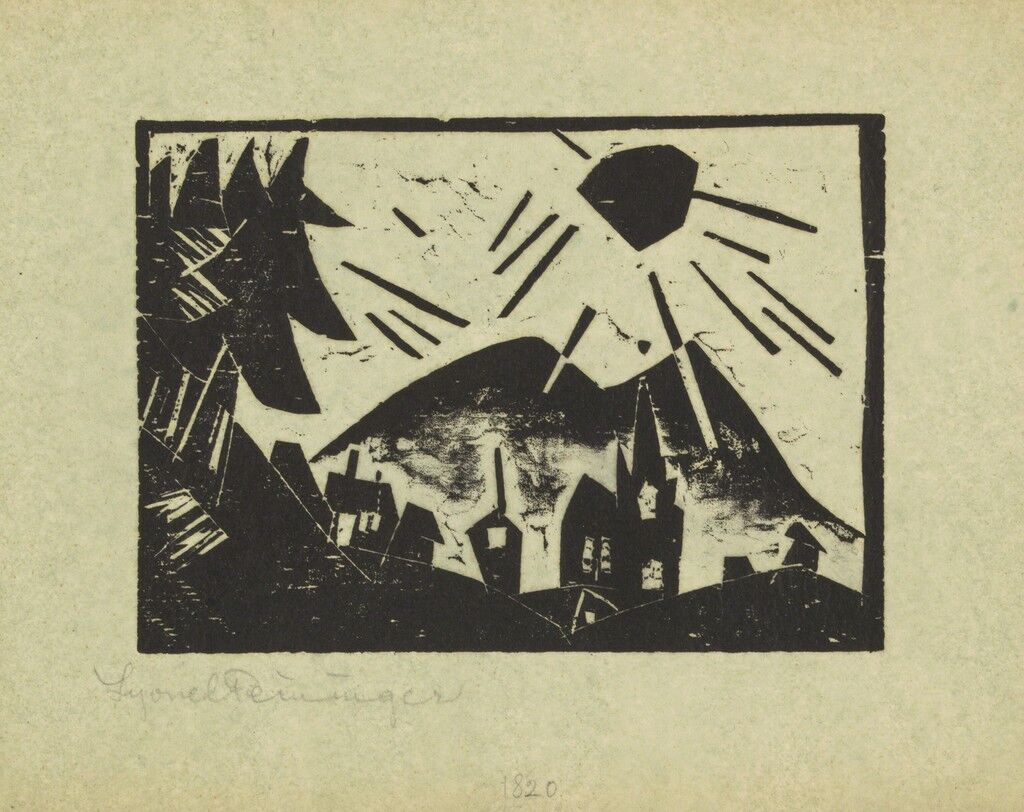 Lyonel Feininger
Mountain Village, 1918
Galerie St. Etienne
Galerie St. Etienne has many important
German Expressionist
works, but this little gem really stands out—and it’s particularly energetic for a woodcut. Wind blows through a valley as a village comes to life under crisp sunshine—all with an economy of marks. It’s a rare proof outside the edition (of 22). 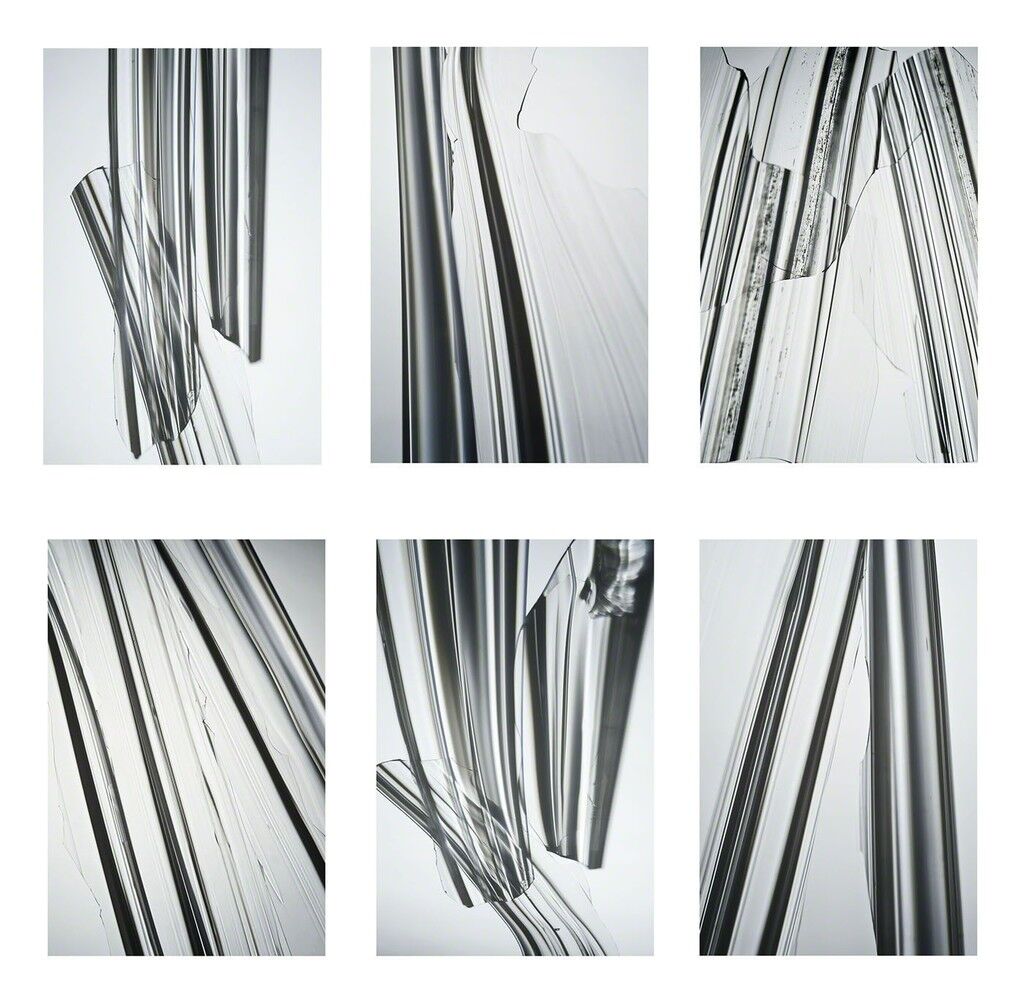 Alyson Shotz
Phase Shift, 2015
Carolina Nitsch Contemporary Art
Shotz made these images while working on a glass sculpture during a residency at the Pilchuck Glass School. The sculpture couldn’t be realized, “so she brought the broken glass back to life by photographing the light and shadow reflected through it,” says gallery director Brian Rumbolo. This silver gelatin print gives the glass an unbelievable depth and smoothness. 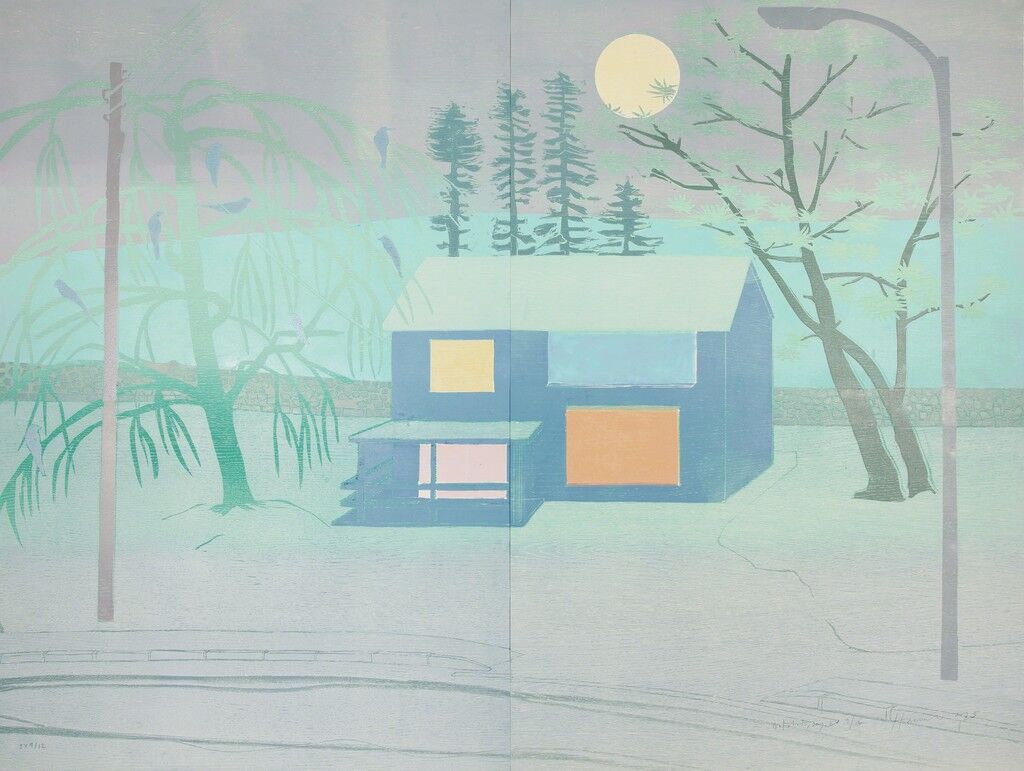 Tom Hammick
Outskirts (Day), 2015
Flowers
This surprisingly large, moody landscape looks more like a painting, yet it has the unmistakable texture of a carefully carved wood cut. Each print from the edition is slightly different due to the way the colors hit the paper. Hammick, a British-based painter, sometimes brings to mind Milton Avery in his use of color, simple forms, and the way he flattens the picture’s surface. It’s a welcome reference that is not commonly found in the present. 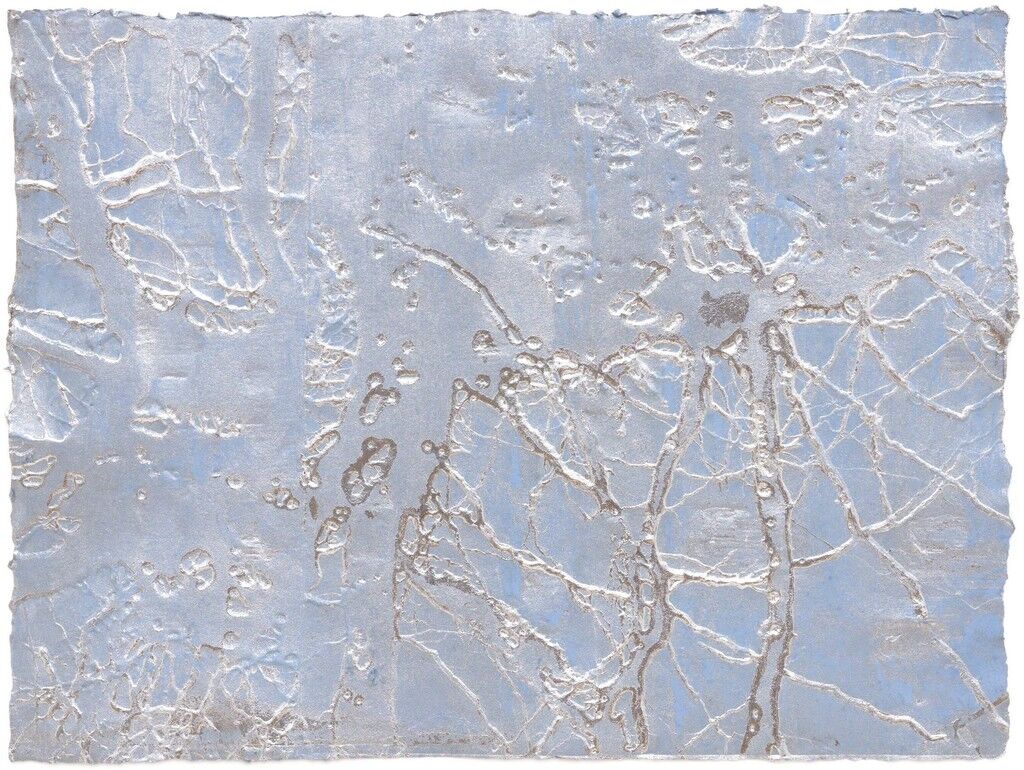 Leonardo Drew
50P, 2015
Pace Prints
Drew brings the tactility of his large-scale sculptures to his small, delicate prints. The surface here is both built up and in relief, resembling fossilized tree and printed in a soft, metallic pigment. It feels very dense for a paper work and retains a sense of the artist’s own hand. 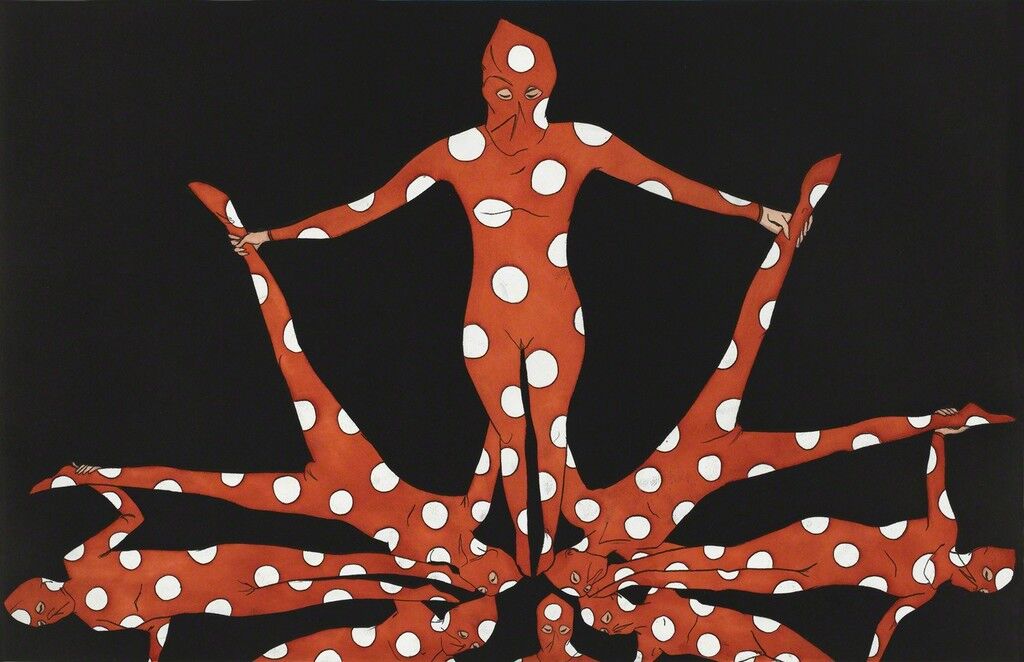 Marcel Dzama
Our Daughter’s Dance with Wisdom, 2015
Crown Point Press
Dzama is best known for his loosely narrative drawings, but recently he’s proved his abilities in several mediums. The works in this new print series are highly theatrical, which may be a reflection of another project—he’s currently designing costumes for a piece in the New York City Ballet’s 2016 season. The odd perspective and masked faces of his acrobatic figures lend just the right amount of Dzamian weirdness to the scene, which might otherwise recall a lively cabaret scene from 19th-century France. 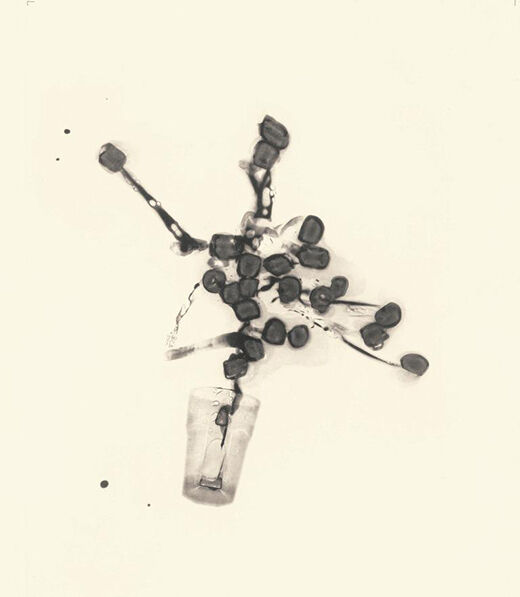 Cornelia Parker
Tumbler with Ice, 2015
Alan Cristea Gallery
The British sculptor, who was recently tapped to create the site-specific installation for the roof of the Met in 2016, creates large sculptures composed of hundreds of elegantly suspended objects, seemingly caught in midair. She brings that same precarious sensibility to paper. To make the works in this series, Parker placed objects directly on photographic paper, capturing their solidity and transparency. 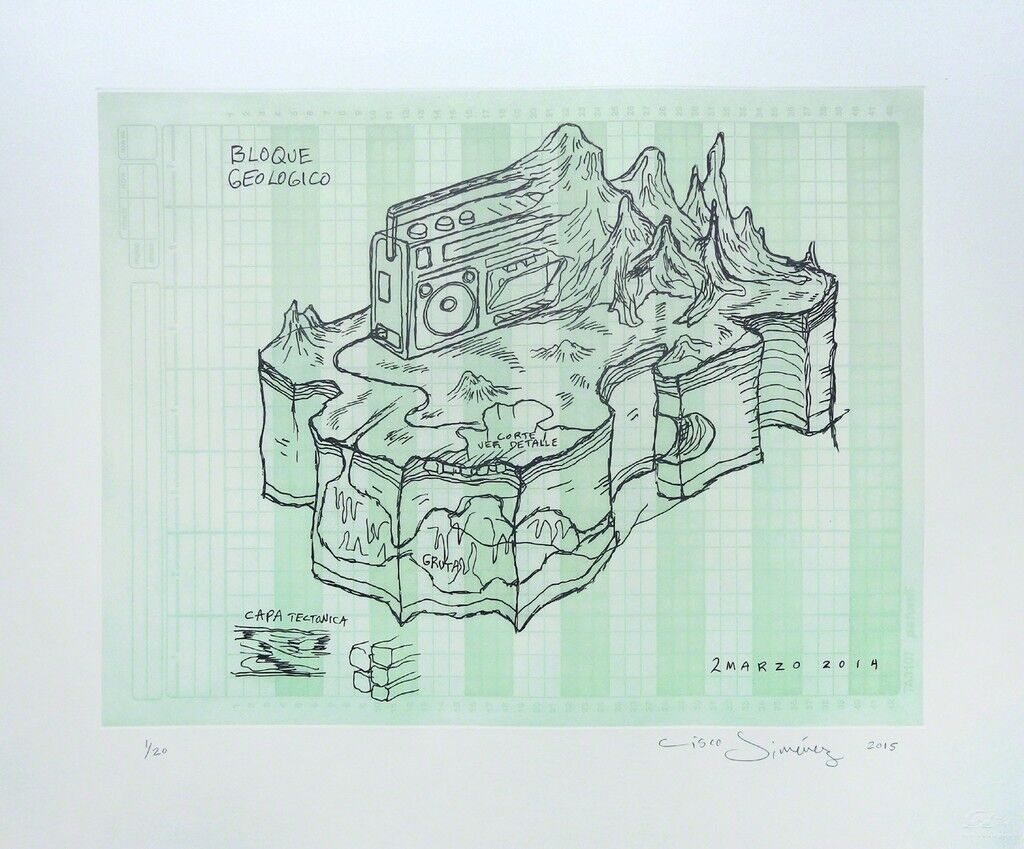 Cisco Jimenez
Bloque geologico (green) - Framed, 2015
Ruiz-Healy Art
Mexican artist Jimenez mixes cultural references from past and present to come up with his witty subject matter. The old accounting forms on which he’s printed this series provide a strangely appealing and nostalgic background for the subject matter—a topographical landscape cross-section engulfing a boom box, like it’s one of the Seven Wonders of the Ancient World. 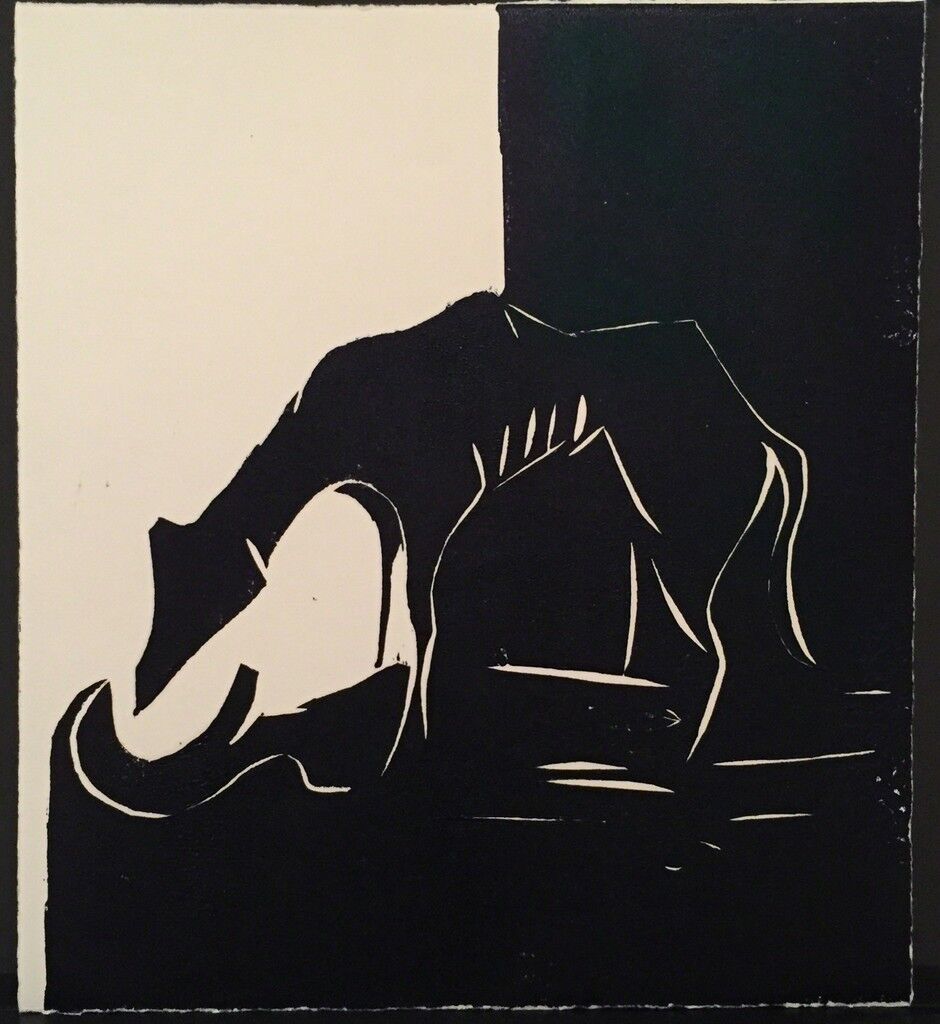 Rachel Howard
Not The Last, 2015
Paul Stolper Gallery
This is a great deal for a work by Howard, a British painter better known for her layered abstractions. She does well with graphic simplicity and figuration, calling to mind the raw emotional power of German Expressionist woodcuts.
—Meredith Mendelsohn
Explore IFPDA Print Fair 2015 on Artsy.
Related Stories