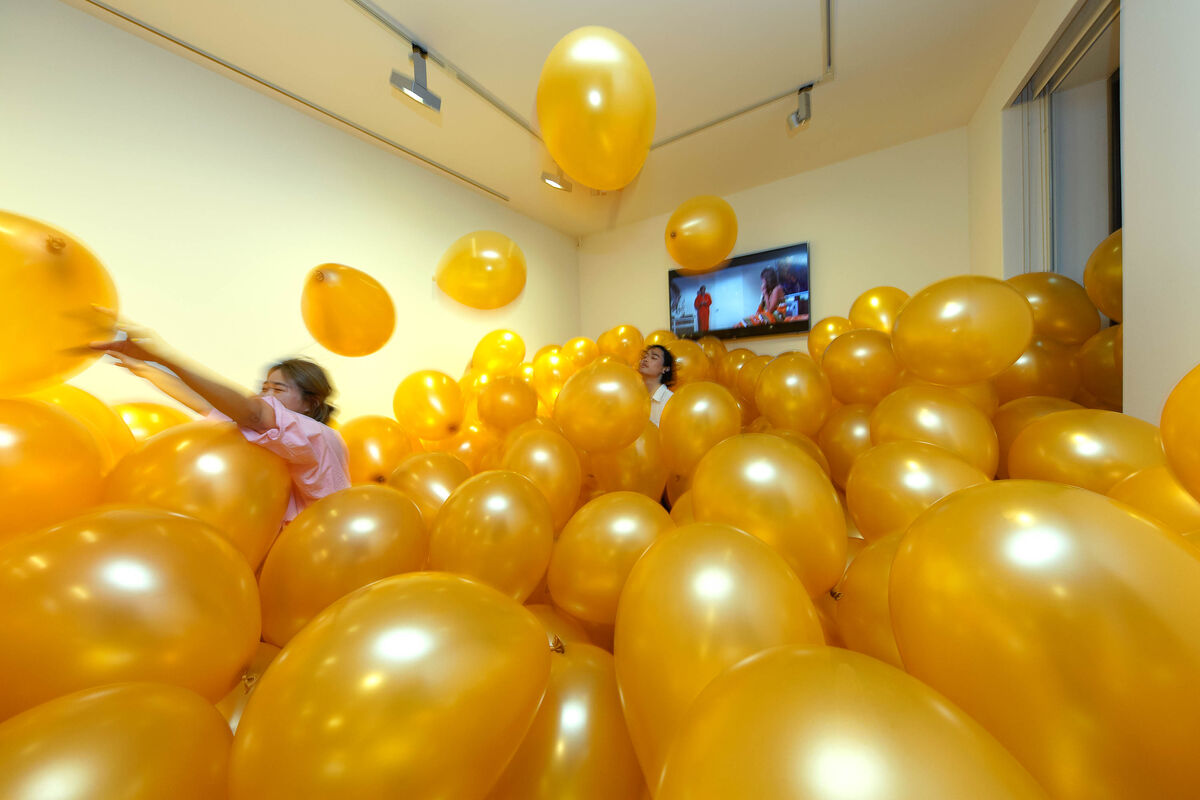 The art world has its particular seasonal habits that kick in when the weather gets warm. Collectors go on vacation, dealers switch to a Monday through Friday schedule, and some lucky artists pass the time at residencies in picturesque spots like Spoleto, Basilicata and Tuscany. But perhaps the most enduring of these summertime traditions is the explosion of group shows across New York.
According to the gallery-going app Seesaw, as of July 24 there were just under 100 group shows on view across Manhattan, Brooklyn and Queens. Dealers said that the annual proliferation of mixed-artist exhibitions has been happening for years—how long exactly, no one was sure, but certainly decades—due to a number of factors that affect galleries during this particular season.
No gallery wants to bruise the fragile ego of an artist by slotting her solo show in during the sleepy summer months. The summer group show is also a chance to unload inventory that went unsold during the two month spree of openings and art fairs that crescendos at Art Basel in Basel, Switzerland. And it gives galleries a chance to play—to bring in a guest curator (a professional or an artist), riff on a theme that befits a fun-filled season associated with summer crushes and trips to the beach, or broadly showcase the gallery’s artist roster. 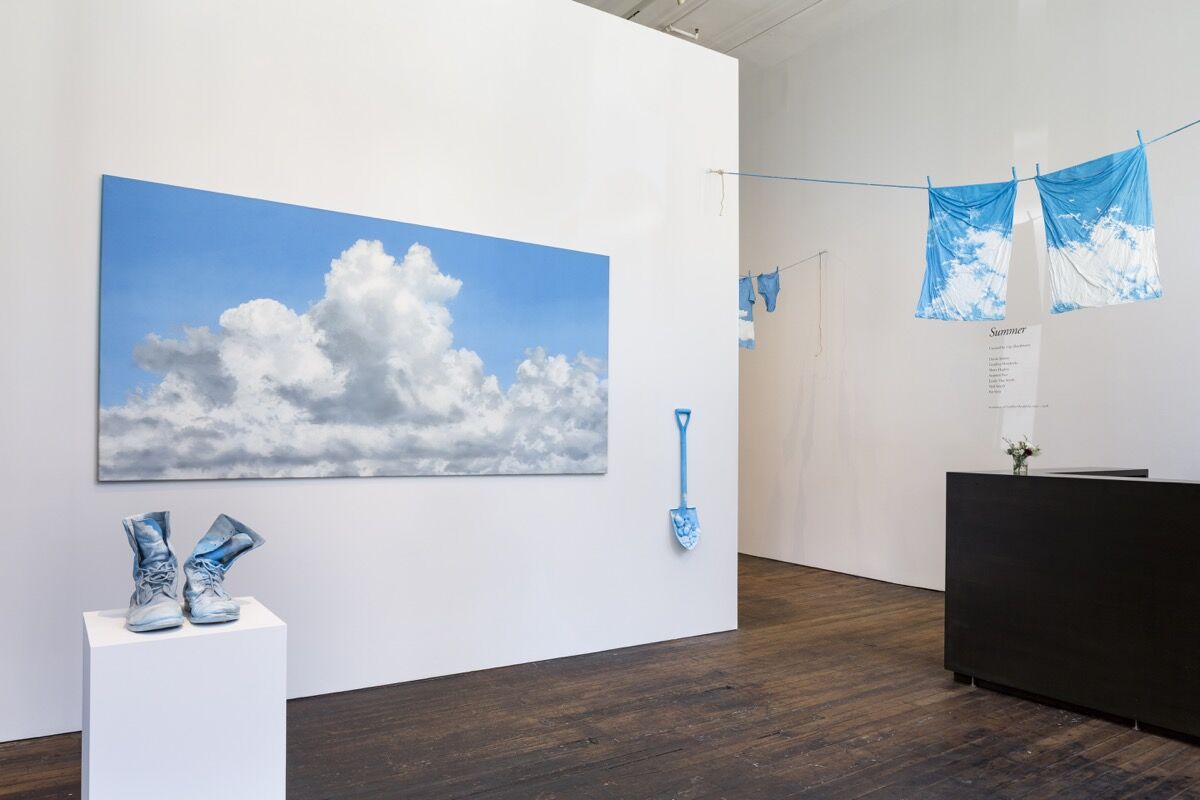 The summer group show has an illustrious past, inspiring such notable shows as “Painting: Now and Forever Part I,” a sprawling exploration of the medium organized by gallerist Matthew Marks and the late, great art dealer Pat Hearn in 1998. That same year at a group show called “The Fifth International,” co-curated by the artists Jennifer Bornstein and
Chivas Clem
and held in Bornstein’s Meatpacking District loft,
Rob Pruitt
staged his infamous Cocaine Buffet, a 16-foot line of white powder that lasted just ten minutes after visitors snorted the whole thing. In the summer of 2005, Gavin Brown’s enterprise staged a group show called “Drunk vs. Stoned 2,” in which the works referenced being under the influence, were made while the artist was under the influence, or both. In 2016, artist
Mark Flood
curated a themed group show at Marlborough Chelsea, despite the fact that, as he told T Magazine, “I usually hate themed group shows.”
He’s not alone. A lot of people hate group shows, thinking of them as watered-down versions of more robust exhibitions, made up of C-list cuts from artists and work that’s been sitting in storage, unsaleable ugly ducklings. In a 2012 interview, the critic Dave Hickey said, “When they make me president, I’m going to ban all group shows.”
“I’m tired of going to dinner and only getting the hors d’oeuvres table—of seeing exhibitions that emphasize the least interesting aspects of the works in the show and demonstrate the vaulting ‘intellectual’ ambition of some preening curator,” Hickey continued. 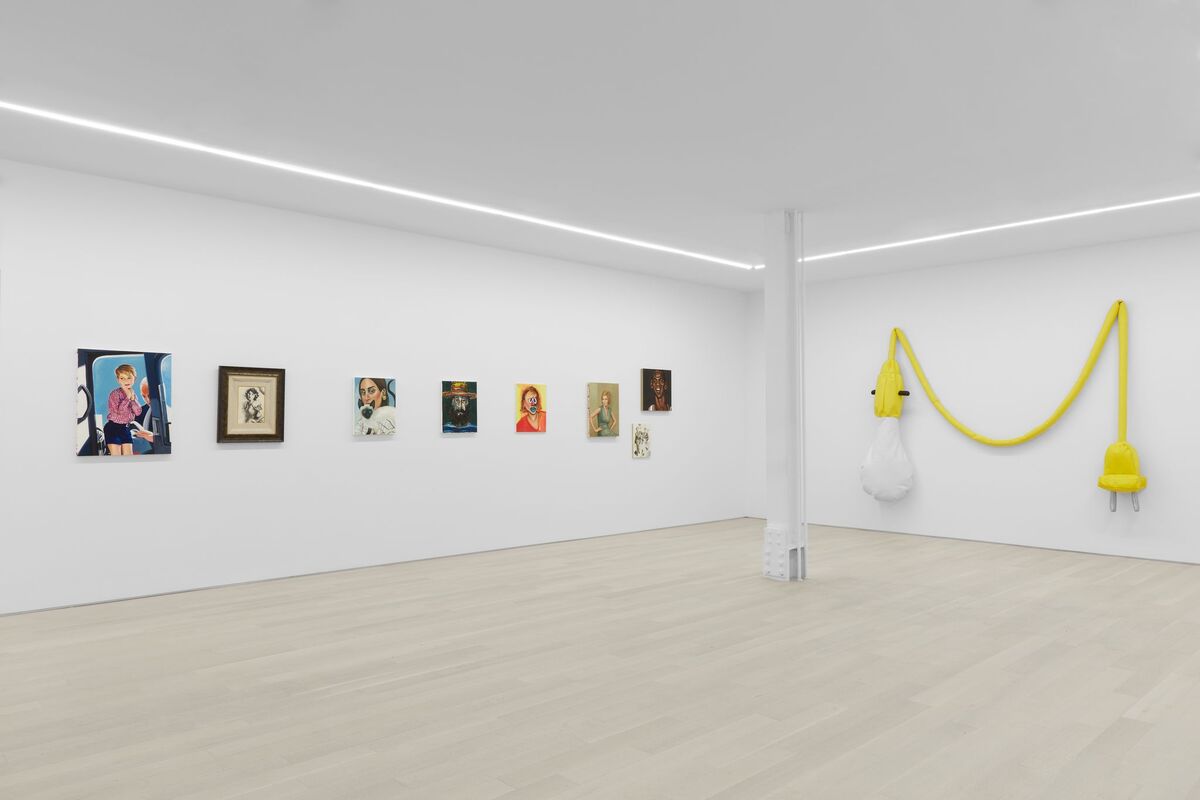 Advertisement
And yet, every summer group shows pop up across the city. A closer look at four of these shows currently on view help explain why the format retains its perennial appeal.
The guest curated show: Bill Powers, the proprietor of Half Gallery on the Upper East Side, was asked to curate a show at the New York outpost of Almine Rech Gallery, which happens to be right next door to his shop—a very summery sign of collegiality in a cutthroat art market. Powers decided to explore the notion of the cliché, taking inspiration from the French philosopher Gilles Deleuze to look at how certain artists lean into familiar tropes in order to subvert and distort them, and how certain artists become associated with certain clichés.
Sam McKinniss
, the reigning master of transmogrifying familiar pop culture imagery into paintings with near-religious intensity, gives us Prince William and his son, George;
Chloe Wise
has a wonderfully droll self portrait with her cat;
George Condo
has a name painting with “CONDO” written out in fancy script; there is a
Mark Grotjahn
painting of a skull, perhaps the most obvious symbolic subject matter of all—the thing from which any subject springs, and the history’s most-cited stand-in for death.
It’s a thin line between hokey and clever, but Powers was willing to explore it.
“If something is derivative, it’s always bad, but something can be cliché and still have value,” Powers said in an interview. “It really came from interviewing artists and talking to artists. When Mark Grotjahn started doing skull paintings, he was like, can I actually do a painting of a skull? You see how people have to give themselves permission sometimes.” 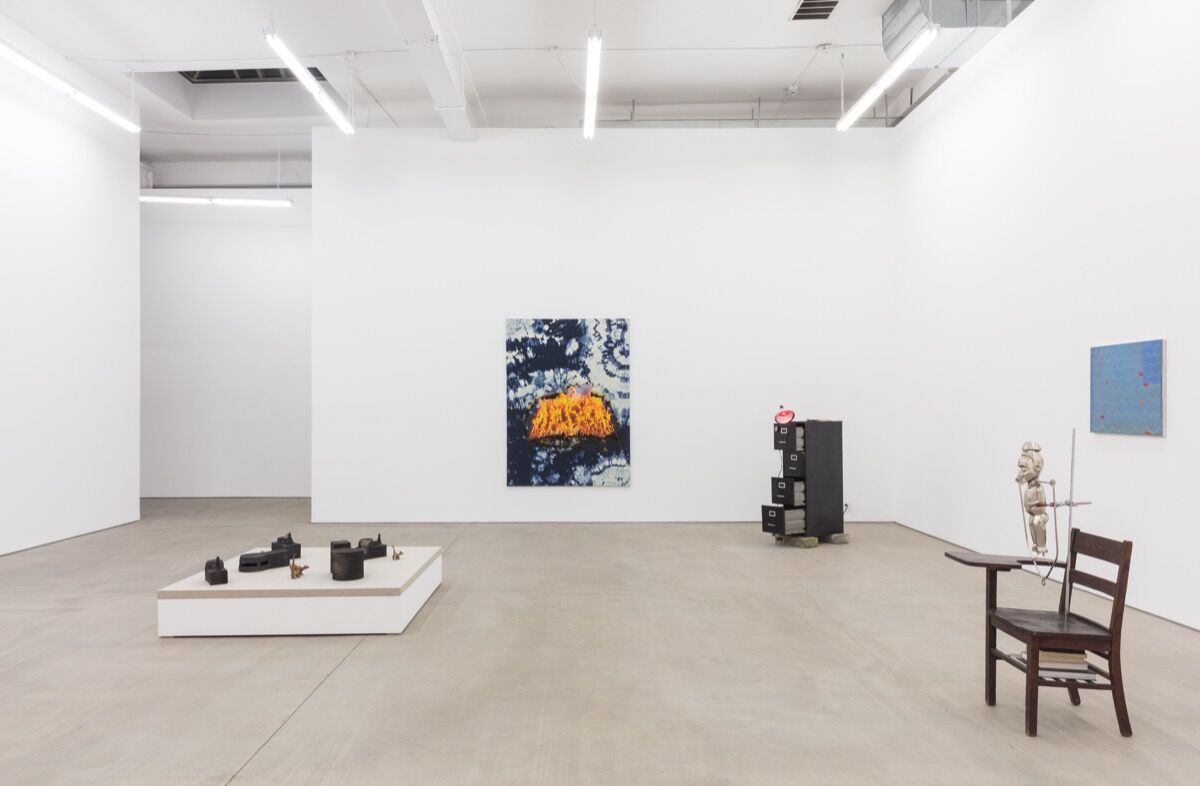 It’s also aware of the inherent irony at play: “Even the very idea of a summer group show has become a form of cliché,” it says in the release. Powers plays with this idea by being in dialogue with the other shows up around town—at one point, he remarked, “Is there a summer show that
Shara Hughes
or
Sally Saul
weren’t in this year?”
The artist-curated show: Indeed, in addition to popping up in “Cliche” at Almine Rech, there are Shara Hughes works in “Seed” at Kasmin—a show of 29 women artists curated by Yvonne Force—and the aptly titled “Summer,” a group show at Peter Freeman, Inc. that was organized by the artist
Ugo Rondinone
, with whom Freeman has “always had a nice dialogue over the years,” said Jayne Johnson, the gallery’s director.
Rondinone’s eye is a discerning one, as the show has just seven artists setting it apart from the more bloated group shows. In addition to Hughes’s lush landscapes, there are
Pat Steir
waterfall paintings to invoke a countryside swimming hole, bright blue skies printings on t-shirts courtesy
Geoffrey Hendricks
, and
Stephen Pace
’s simple, beautiful paintings of the perfect July weather in Maine. 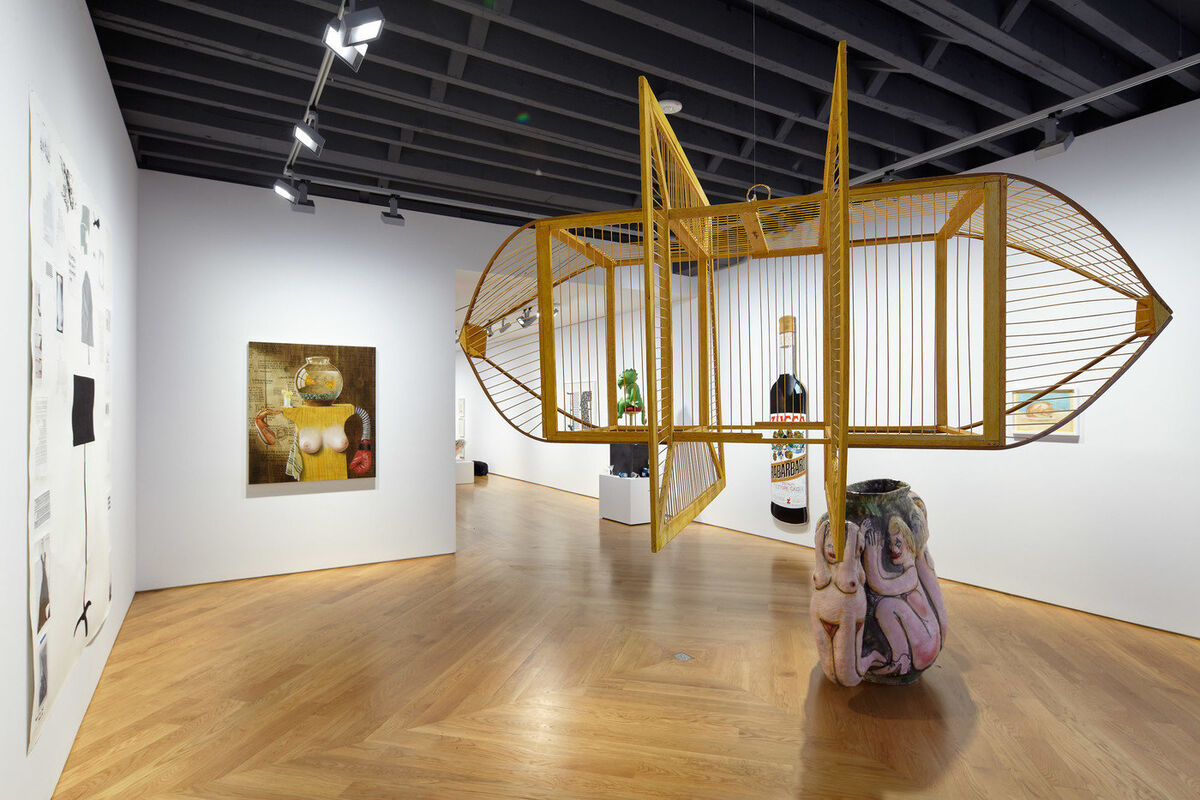 The checklist group show: Olivier Babin, the owner of Clearing gallery in New York and Brussels, cited another practical reason for having an exhibition in the summer: There is still rent to be paid on his Bushwick and Upper East Side spaces in July and August. This year, he put on a show in which every living artist in Clearing’s roster is represented, to give locals and visitors from out of town a full look at the gallery program.
Babin noted that in Europe, where summer vacation is taken very seriously, it is customary to close the gallery for a month or so around August. The cheaper rent of a city like Brussels also means the gallery can afford to make its budget even if they’re closed for a chunk of the year.
“There are plenty of spaces elsewhere that can say, ‘Oh, rent is cheap, I might as well close the gallery and say ‘fuck it’ and go on vacation or something,’” Babin said. “In New York that’s not really an option for people. Most galleries do not close for a month.”
The esoteric themed show: Clearing simply showed work from all the living artists on its roster, but other outfits hone in on a very specific theme. At Tanya Bonakdar Gallery in Chelsea, there’s a group show named “Pine Barrens,” a reference to a forest-heavy area in New Jersey that’s apparently home to the Jersey Devil—the local legend, not a member of the area professional hockey team—and at Andrew Kreps there’s “After Hours in a California Art Studio,” a show that investigates the culture of the artist’s studio. But the most esoteric focus for a group show up this summer must be the 1968 Peter Sellers screwball comedy called The Party, which inspired a show of the same name at Anton Kern Gallery, curated by Ali Subotnick. 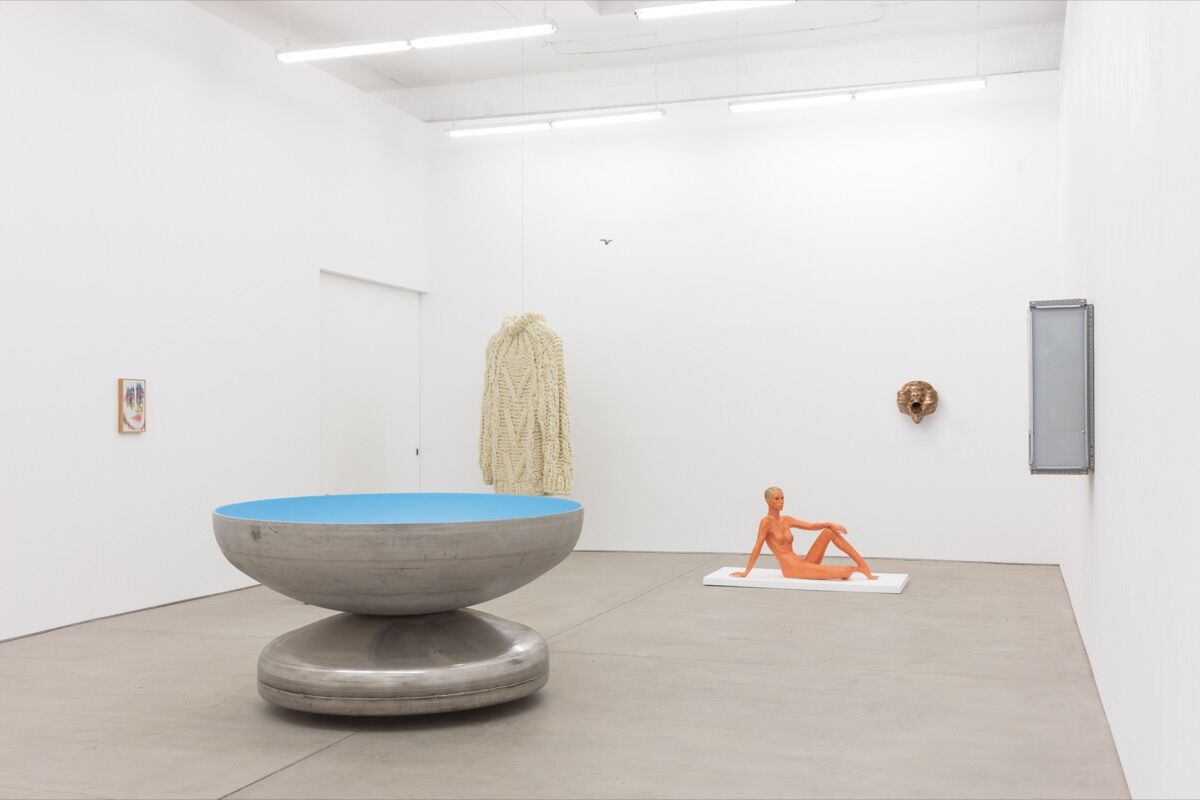 “Anton asked me to do a show and I was super busy and didn't have time, and we ran into each other and somehow that movie came up—I had never seen it, so he started showing me clips,” Subotnik said. “And then I watched it the next day and I said, OK, I’ll do the show if we do it around this movie.”
The movie inspired artist
Jamie Isenstein
to make a bubbles-spewing grandfather clock that’s a direct reference to a scene in the film.
Maurizio Cattelan
invokes the fish-out-of-water comedy by staging a performance in which a live parrot comes in Tuesdays and Fridays to squawk at visitors. And
Martin Creed
’s Work No. 1190: Half the air in a given space (2011) fills a room full of golden yellow balloons. After you hack your way through the thicket, you see the film  playing on a screen at the other end.
Subotnick added that, for her, staging summer group shows with some levity has long been a tradition in New York, and it’s still a welcome shift each year.
“A lot of people were talking about how it’s very nice to laugh right now,” she said.
Nate Freeman
Related Stories 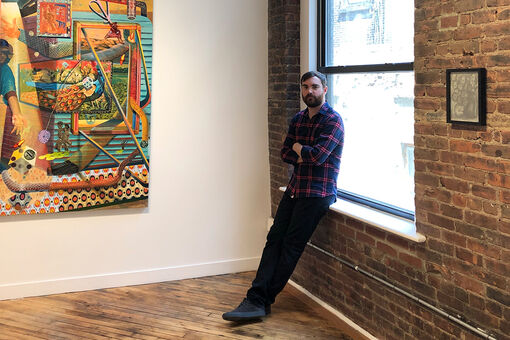 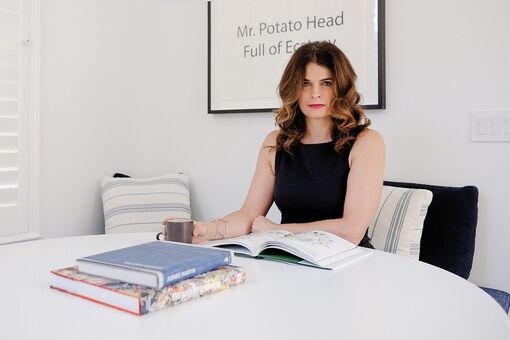 Why Uprooting My Gallery Space Is the Best Thing I Can Do for My Artists
Artsy Editors
Oct 25, 2017 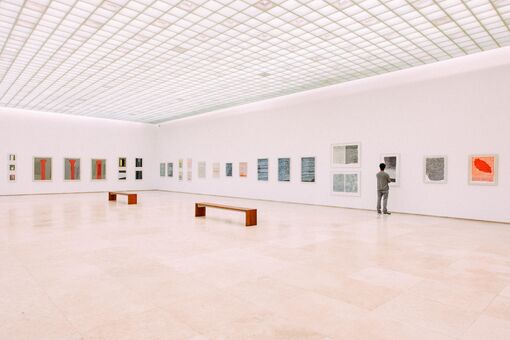 Why the Auction World’s Top Brass Are Leaving for Galleries
Nate Freeman
Feb 15, 2018