01  This week, a string of major galleries announced plans for new outposts across the globe.

Paris’s Almine Rech will cross the pond in October when it opens a new 3,000-square-foot gallery on the Upper East Side. With spaces in London and Brussels already, New York will serve as the gallery’s fourth location. David Zwirner is headed in the opposite direction—the New York dealer announced plans this week to rent two floors in a commercial tower in Hong Kong. The space, slated to open in fall 2017, will mark the gallery’s first foray into Asia. And on Thursday, Hauser & Wirth revealed an upcoming move to the former home of the Dia Art Foundation in Chelsea while it awaits the completion of its new permanent home (conveniently located next door to the Dia building). Hauser & Wirth’s first exhibition in this upcoming temporary location is scheduled to open this fall, and the gallery plans to mount shows there through 2018. This follows news last week that Marianne Boesky closed its Lower East Side space and will expand its Chelsea gallery as Dominique Lévy takes over the full premises of 909 Madison, which it has shared with Galerie Perrotin since 2013.

02  Torrential rainfall across France flooded a storage vault containing the majority of the Musée Girodet’s collection, water-logging hundreds of artworks.

(via Hyperallergic)
The museum in Loire Valley, which has been under renovation for the past four years and was slated to reopen in 2017, had been storing the works in the underground safe of a former bank. On May 30th, flash flooding in the region filled the vault with water in just two hours. The artworks—by artists such as
Théodore Géricault
,
Jean-Jacques Feuchère
, Henry de Triqueti, and
Francisco de Zurbarán
—sustained hundreds of thousands of euros in water damage. The museum is located roughly 70 miles south of Paris, which was recently hit by its worst flooding since 1982. Several museums, including the Louvre, Musée d’Orsay, and the Grand Palais, took precautions to protect their collections from the swollen Seine River.

03  The boundary-pushing Brazilian artist known simply and sonorously as Tunga died this week at the age of 64, after a battle with cancer.

(Artsy)
Tunga
’s legacy is defined by an opus of strange and alluring sculptures, videos, performances, and poetry, bolstered by his belief in the mystical, symbolic power of objects. “He described himself as poet and alchemist and sought to reveal the mythical undercurrents of modern life through an interconnected body of work,” Tunga’s gallery Luhring Augustine wrote in a statement issued Tuesday. Tunga mounted projects at the 40th and 46th editions of the Venice Biennale, Documenta X, and four editions of the São Paulo Biennial; he was also the first artist to install a work in the Louvre’s glass pyramid.

(via ArtAsiaPacific)
No one was injured in the incident, which severely damaged one of the compound’s 16 buildings. The Tai Kwun complex, more commonly known as the Central Police Station Compound, is expected to serve as a cornerstone of Hong Kong’s developing arts scene and “fill the gap between the smaller nonprofit spaces and the museums,” head of art programming Tobias Berger told Artsy in March. The site has been under renovation since 2006 and was originally set to open late this year, although the date has since been pushed back to 2017. It remains to be seen whether this news will delay the construction further. Similar holdups in the construction of the massive West Kowloon Cultural District Authority have sparked criticisms that the Hong Kong government is mismanaging its arts infrastructure projects.

05  Moscow will host the world’s first triennial dedicated to Russian art in 2017, helmed by the city’s Garage Museum of Contemporary Art.

(via Artforum)
The inaugural edition will be led by the museum’s chief curator, Kate Fowle. Together with a team of fellow Garage curators, Fowle has traveled to more than 40 Russian cities in order to select the featured artists. The triennial, which kicks off next March, will feature work made since 2012, a time organizers consider significant in Russia’s recent history. The date marks the year when protests—which erupted in response to voting irregularities—were curtailed by the passing of new legislation targeting unauthorized demonstrations. The year 2017 also marks the 100th anniversary of the Russian Revolution; a press release from the museum notes, “Just as the Revolution encouraged Russia’s first Avant Garde, Garage is looking to spur the next.”

06  Archeologists have uncovered a cache of Paleolithic-era cave paintings in Spain’s Basque country, some of which are estimated to be 14,000 years old.

(via Hyperallergic)
The site was first discovered in 1929, but its difficult-to-access location—nearly 1,000 feet underground—made exploration challenging. A new team of archeologists began work in the caves in 2014, unearthing approximately 70 depictions of hunting scenes that include animals such as deer, goats, and horses. One image shows a bison impaled by 20 spears—ostensibly the record for most spear markings in any European cave painting to date. The archaeologist who helmed the dig, Diego Garate, labeled the discovery “an exceptional find, the equivalent of discovering a lost Picasso.” Although the cave is closed to the public, researchers plan to create and distribute 3D versions of the drawings in the near future.

07  An exhibition at the Bronx Museum to feature art loaned by a Cuban institution has been postponed amid concerns that the works could be seized upon entering the United States.

(via The Art Newspaper)
The decision is tied to some $7 billion worth of outstanding claims brought by roughly 6,000 American citizens who say their property was confiscated after Fidel Castro took control of the island nation. The works of art slated to appear in the Bronx Museum show are state property to be loaned by the Museo Nacional de Bellas Artes (MNBA), putting them at particular risk of seizure by U.S. courts to satisfy the outstanding claims. Though the Bronx Museum is optimistic that the exhibition will open in January 2017, the delay is evidence that much remains in limbo even as diplomatic relations between the U.S. and Cuba warm. Until the American embargo of Cuba—a relic of the 1962 missile crisis—is lifted and claims resolved, art loans to the U.S. by the Cuban government will remain a tricky affair.

08  After spending the last three decades tucked away in a private collection, a portrait by Amedeo Modigliani of his muse Jeanne Hébuterne is expected to sell for more than $40 million at a Sotheby’s London sale this month.

(via Blouin Artinfo)
Jeanne Hébuterne (au foulard) (1919) will be offered at the auction house’s Impressionist and Modern evening sale on June 21st, alongside a Cubist work by
Picasso
depicting his lover Fernande Olivier. In a statement, Thomas Bompard, head of Sotheby’s Impressionist and Modern art evening sales, compared the two pieces: “One is expressed in beautiful curves and colours, the other is all about sharp angles and light effects.” There’s little chance the painting will surpass
Modigliani
’s current record of $170 million, set by Nu Couché (Reclining Nude) (1917–18), which became the second-most expensive painting ever sold at auction in November 2015 at Christie’s New York. It remains to be seen if the Sotheby’s London auction will make up for a subdued performance in New York, when the house’s Impressionist and Modern art auction achieved a sell-through rate of only 66% and fell below the presale low estimate by some $20 million.

09  Although it opened to the public less than a month ago, Ugo Rondinone’s land art project in the Nevada desert has already been defaced by vandals.

(via the Las Vegas Review-Journal)
Titled Seven Magic Mountains, the project—which features seven towers of brilliantly-hued limestone boulders, each standing at 25 to 35 feet tall—took five years and cost more than $3 million to install. Phrases like “666” and “Hella Spiders,” along with images of genitalia and other swear words, have been scrawled across the painted rocks. The exact date the vandalism took place is remains unclear, although the area police department has been notified. The Nevada Museum of Art, which presented the work along with the Art Production Fund, said in a statement: “The positive reception the piece has received has far surpassed our expectations… Of course, there are always people who behave poorly. We are very disappointed to learn of the recent vandalism to the artwork.” According to the project’s producers, the graffiti will be erased soon as possible.

10  A visitor to the recently expanded SFMOMA tripped last Thursday, grazing Andy Warhol’s Triple Elvis (Ferus Type) (1963) with an elbow in the process.

(via SFist)
The painting was removed from the gallery and is currently being evaluated by conservators to establish what, if any, damage occurred during the process. It is among a group of 22 works by
Warhol
that feature The King, one of which sold at Christie’s New York in 2014 for a whopping $82 million. While market fluctuations mean that the version elbowed in San Francisco may not currently be worth quite that much, it still would make this one of the costliest art blunders of recent years, if damage was done (significantly more than the £10 million
Monet
that was punched in June 2012, and which you can punch, too). Notably, that sale sparked significant controversy in Germany due to the fact that it was consigned by a state-owned casino to pay off its heavy debts. This and other recent polarizing deaccessions from public and private collections in the country have helped rally popular support around a law that would limit sellers’ ability to export works of significant value and age. The law has been met with the ire of the German art dealing community.
Artsy Editors
Cover image: Andy Warhol, Triple Elvis [Ferus type], 1963. © The Andy Warhol Foundation for the Visual Arts / Artists Rights Society (ARS), New York. Courtesy of the San Francisco Museum of Modern Art.
Related Stories 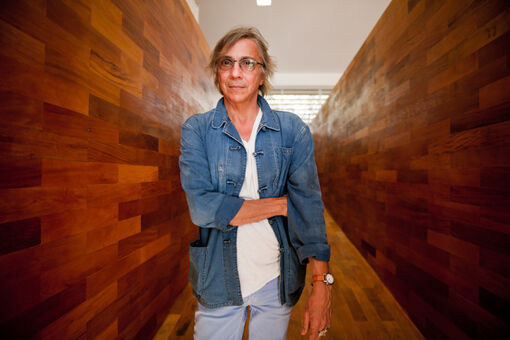