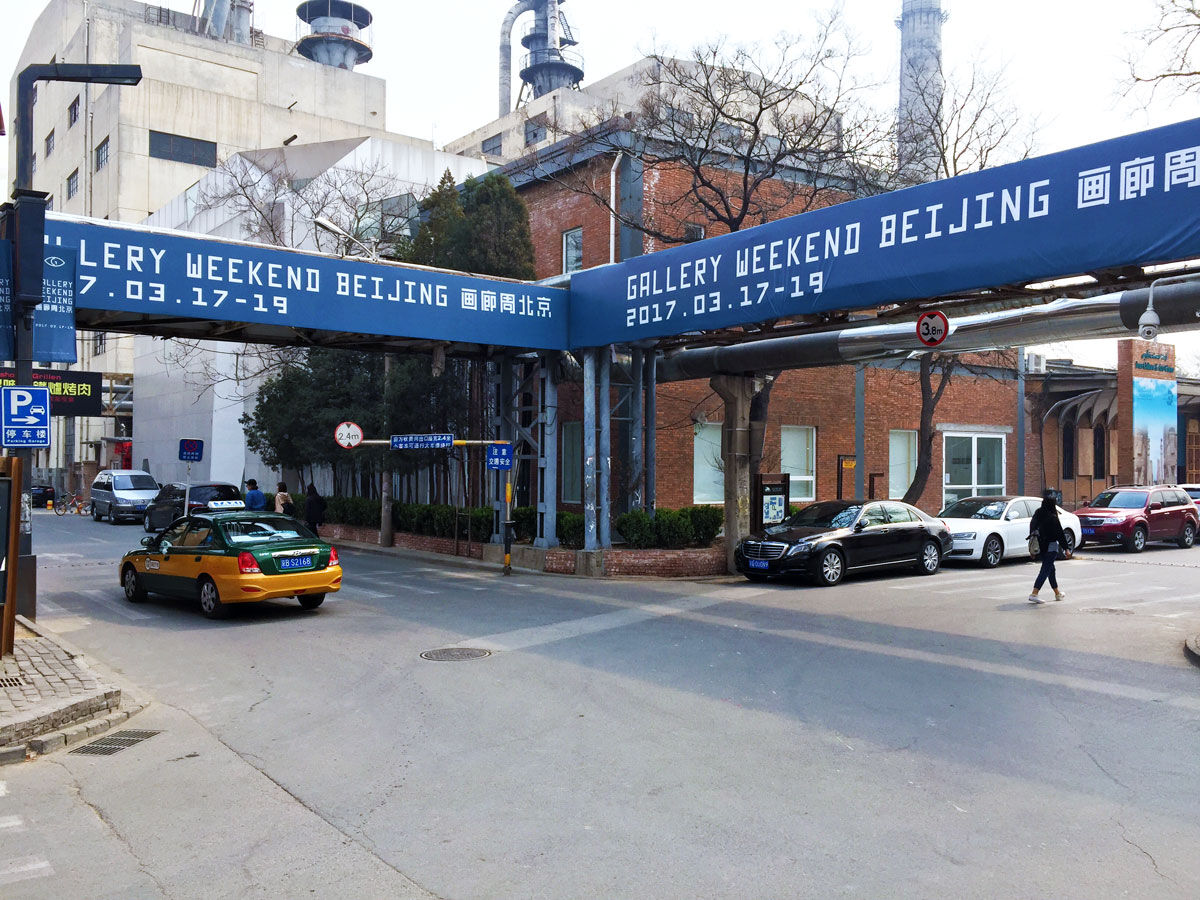 As the art world geared up for this week’s Art Basel in Hong Kong, a number of international visitors and hundreds of locals made their way to Beijing’s 798 and Caochangdi art districts for the inaugural Gallery Weekend Beijing.
Launched by German artist and writer Thomas Eller, the weekend takes cues (and a strikingly similar typeface) from the gallery weekend in his former hometown, Berlin. In total, 14 of the city’s galleries and four of its museums took part in the weekend, which also involved a number of talks and performances.
The gallery weekend model makes sense for Beijing much in the same way that it does for Berlin. Market attention on the mainland has, particularly recently, focused on the more internationally oriented Shanghai. Beijing does not have a major art fair or another major event to draw the art world’s attention. But it has long been home to a wealth of the country’s most prominent artists, and serves as the conceptual core of Mainland China’s art community.
An event that brings in international attention, but places its focus on exhibitions, artists, and art practice rather than on commerce, is what the city needed, according to Long March Space founder Lu Jie. During a panel on China’s internationalization, Lu said that while the country’s art market has become strikingly global over the past decade, he thinks that it has actually reached a low point in terms of intellectual dialogue.
“This is the kind of international exchange that we lack today,” he said. 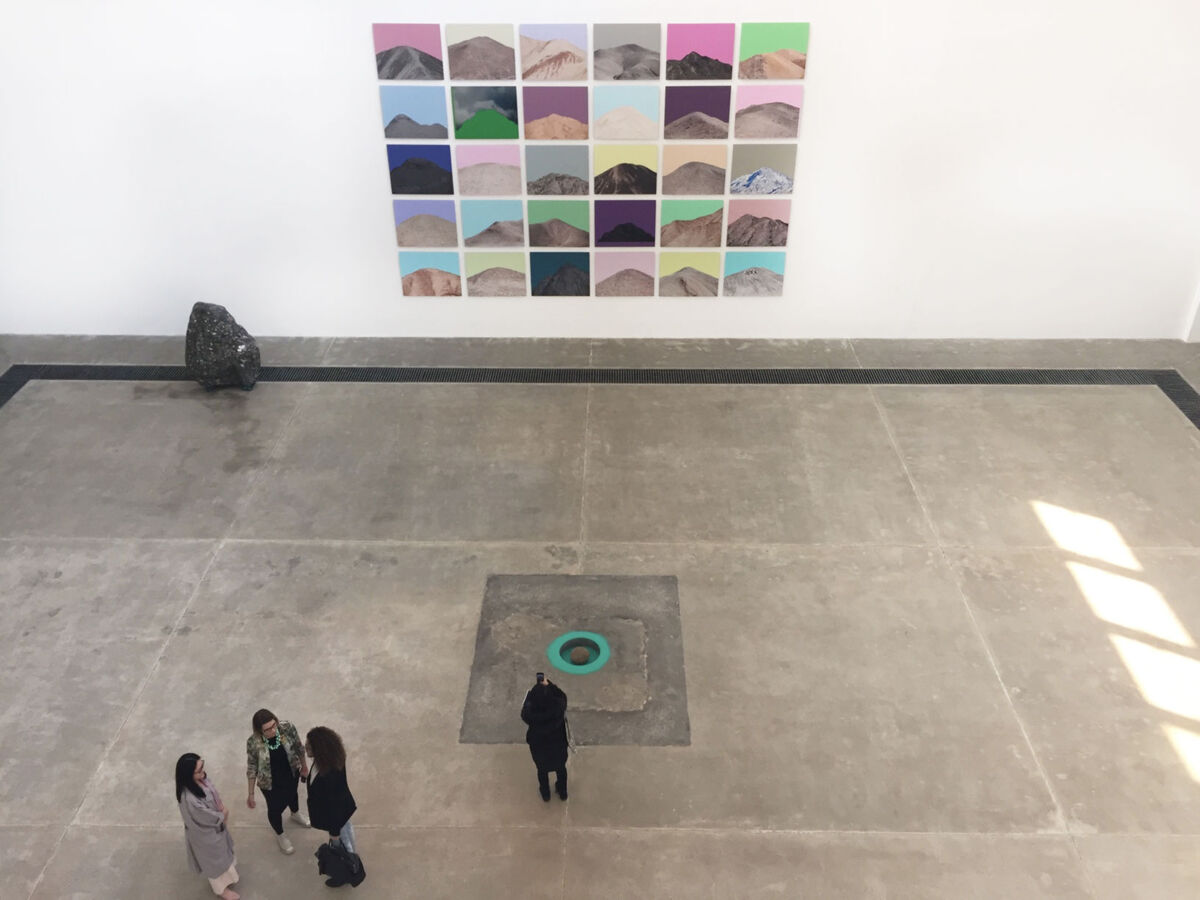 Such was Eller’s aim in initiating the weekend. After moving to Beijing three years ago, Eller said he began to think about ways to better position the city’s art scene. That started with “Die 8 Der Wege,” a survey show of Chinese contemporary art that he co-curated with Guo Xiaoyan and Andreas Schmid for Berlin’s Uferhallen. He then, however, set his sights on trying to bring together Beijing’s galleries and a growing number of museums. He said that, as in all major art hubs, politics within the art world here meant that he could have an impact that someone coming from the inside might not.
“It maybe needed an outsider to come in and tie these things together,” Eller said.
The entire gallery weekend came together in just three months. “We had to show momentum,” he said, in order to gain support of key players within Beijing’s art community. Even before the weekend’s events had come to a close, Eller had his eyes set on an expanded edition next year.
Gallery Weekend Beijing kicked off with a performance by
Cheng Ran
in 798, at a still-under-construction location for Galerie Urs Meile, whose main gallery compound is about one mile to the north. The performance, Neoclassical, saw a series of Cheng’s earlier films cut together with found, archival footage and displayed on a giant LED screen as experimental musicians Li Jianhong, Wang Ziheng, and Soviet Pop from Beijing’s underground scene played instruments ranging from electric guitar and trumpet to bubble wrap. 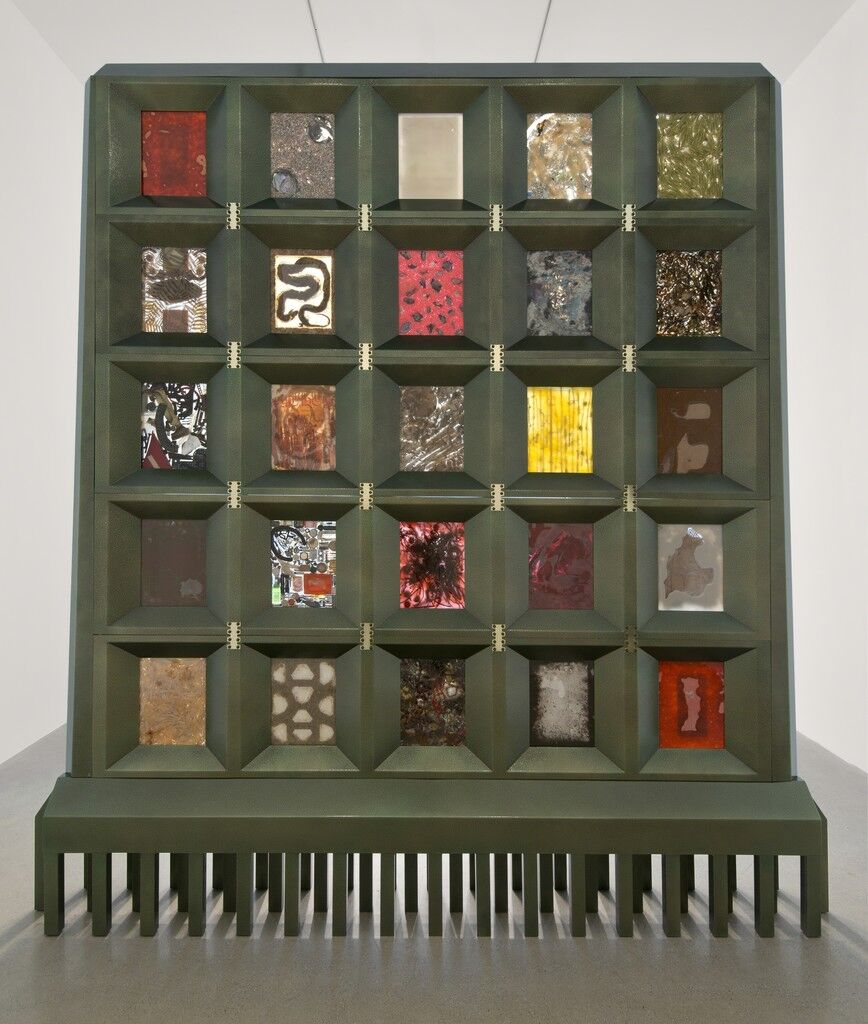 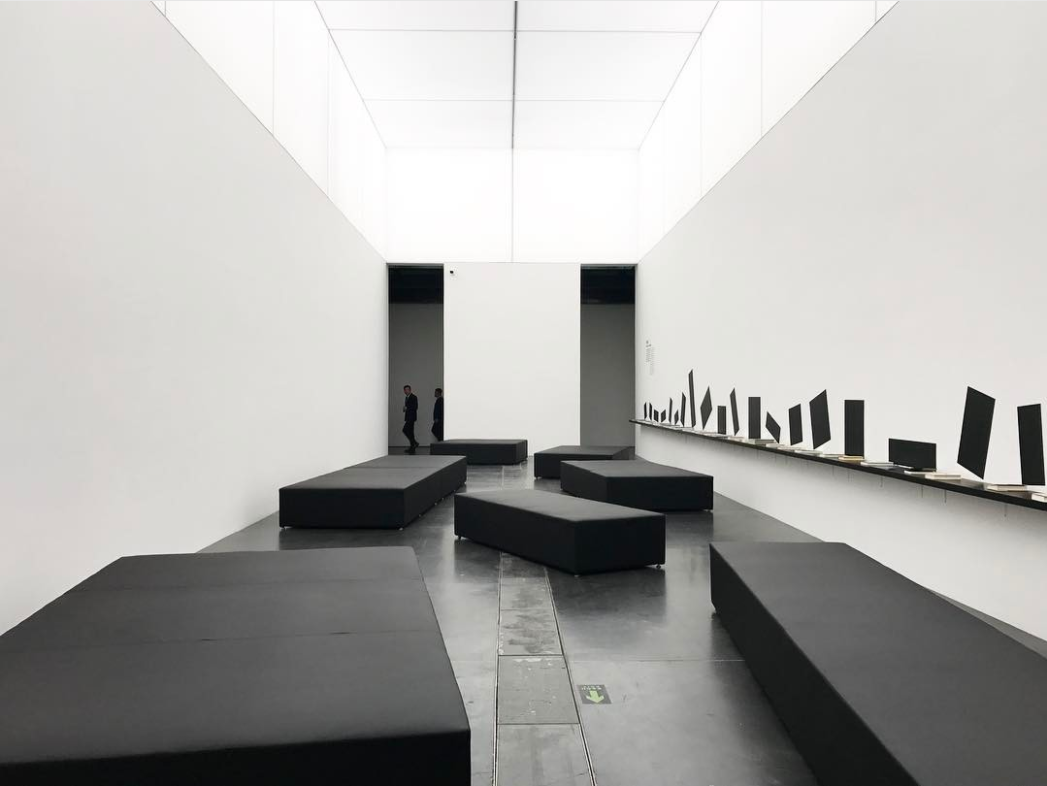 Installation view of “The New Normal” at Ullens Center for Contemporary Art. Photo by @christina_uoy, via Instagram.

Advertisement
While galleries were the ostensive focus of the weekend, its crown jewel was the Ullens Center for Contemporary Art’s (UCCA) massive survey of art in China today “The New Normal,” curated by
Guo Xi
, Yang Zi, Alvin Li, and Wenfei Wang. The show is the latest in an iterative series of surveys of Chinese contemporary art by an institution that remains at the very heart of 798 despite ongoing questions about its future. (The museum’s founder Guy Ullens announced in July that he intends to sell the museum and has publicly released little information since.)
“The New Normal” features standout works by Chinese rising stars like
Cui Jie
, Guo Xi, and
Miao Ying
(her installation Chinternet+ is the show’s highlight). But it also reflects China’s internationalization, with recent BMW Art Journey winner
Max Hooper Schneider
presenting a monumental sculpture that encases snakes, bullets, and innumerable knickknacks in acrylic resin, and a
Sophia Al-Maria
film that positions the shopping mall as the cathedral of the 21st century.
Gallery Weekend Beijing’s “Best Gallery Exhibition Award” was handed down to
Zhuang Hui
for his exhibition “Qilian Range” at Galleria Continua. The award provides the winning artist with the opportunity to create a catalogue and the winning gallery gratis participation in next year’s gallery weekend. It recognized an exhibition that focuses on a series of photographs of the artist bounding through and looking towards the Qilian mountain range nearby his hometown of Yumen in western China and was curated by Frieze’s Colin Siyuan Chinnery. 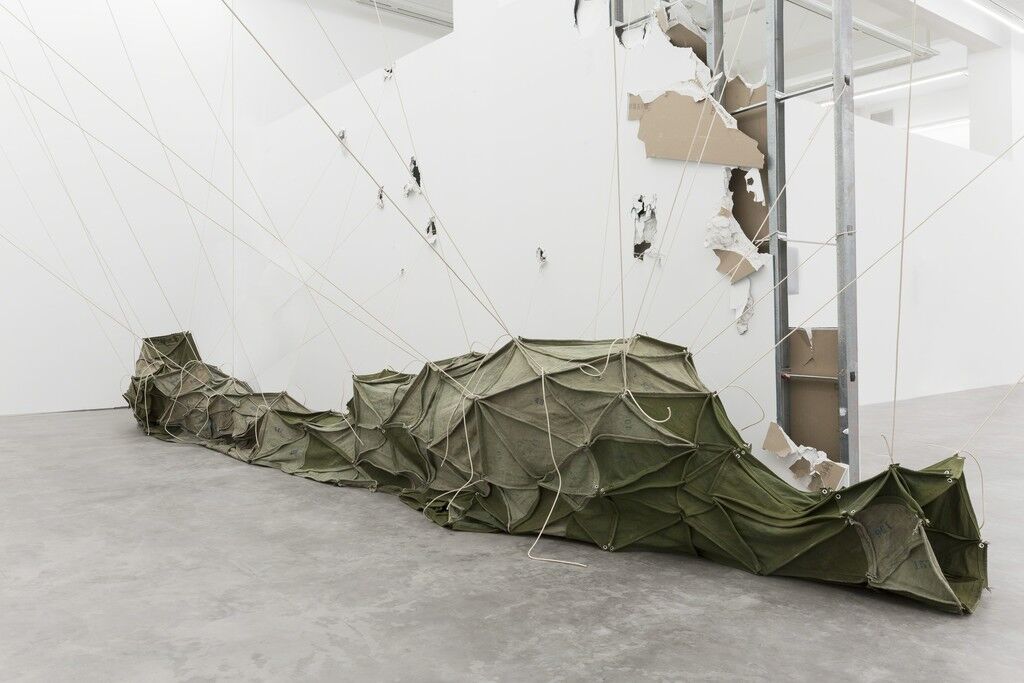 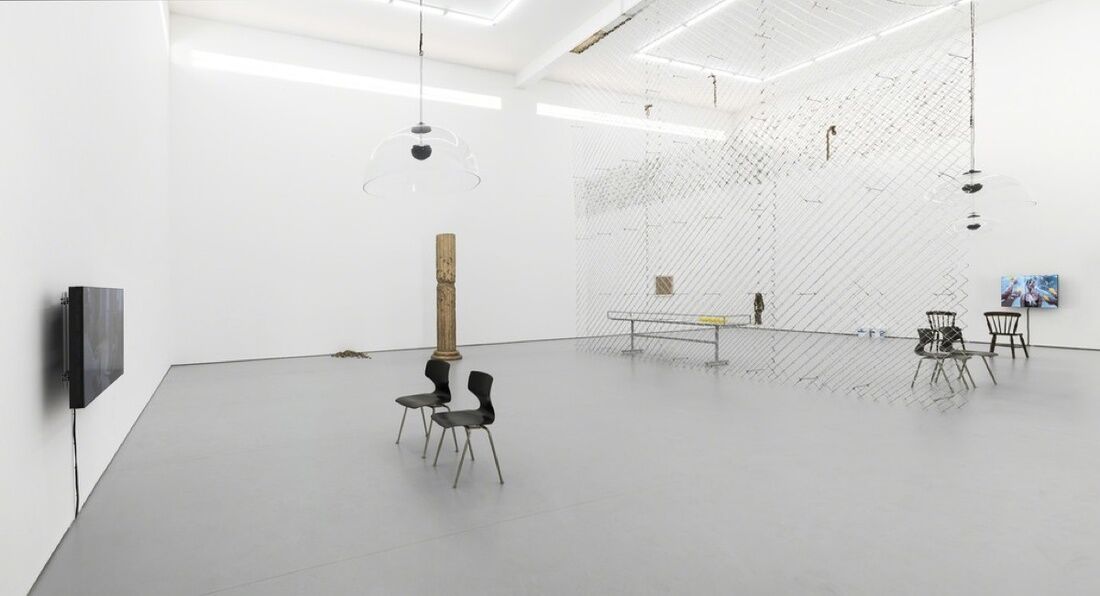 Installation view of He Xiangyu at White Space Beijing. Photo courtesy of the gallery.

As deserving of recognition, however, was White Space’s solo of
He Xiangyu
(who also opened an exhibition at Shanghai private museum Qiao Space this past weekend) and Long March Space’s group show “Marching in Circles.” Curated by Robin Peckham, the latter show features remarkable works by the collective COME INSIDE, whose app Love Spam (2017) allows those who download it to either send the artists money or receive messages that provide, alternatingly, uplifting advice and depression-inducing news;
Yu Honglei
, whose video En Route (2016) appropriates footage from desert rally-racing; and
John Gerrard
, who displays a set of mesmerizing, digital renderings of oil floating on the Thames and Hudson rivers.
While the gallery weekend saw a surprisingly high concentration of installation and video across its exhibitions, painting also remained well represented. Influential young gallery Magician Space mounted a show of humorous and discomfiting works by
Wu Chen
—one sees Osama bin Laden holding a dead swan, another, Santa Claus lying naked on a brothel bed, a mirror above showing his less-often-seen pair of rosy cheeks. Pace Beijing constructed a runway of sorts to guide viewers through
Li Songsong
’s weighty, pastel-hued works in oil. And PIFO Gallery mounted a 10-year-anniversary survey of its engagement with abstract art, including works by
Huang Yuanqing
,
Liu Jian
,
Enrico Bach
, and
Simon Mullan
. 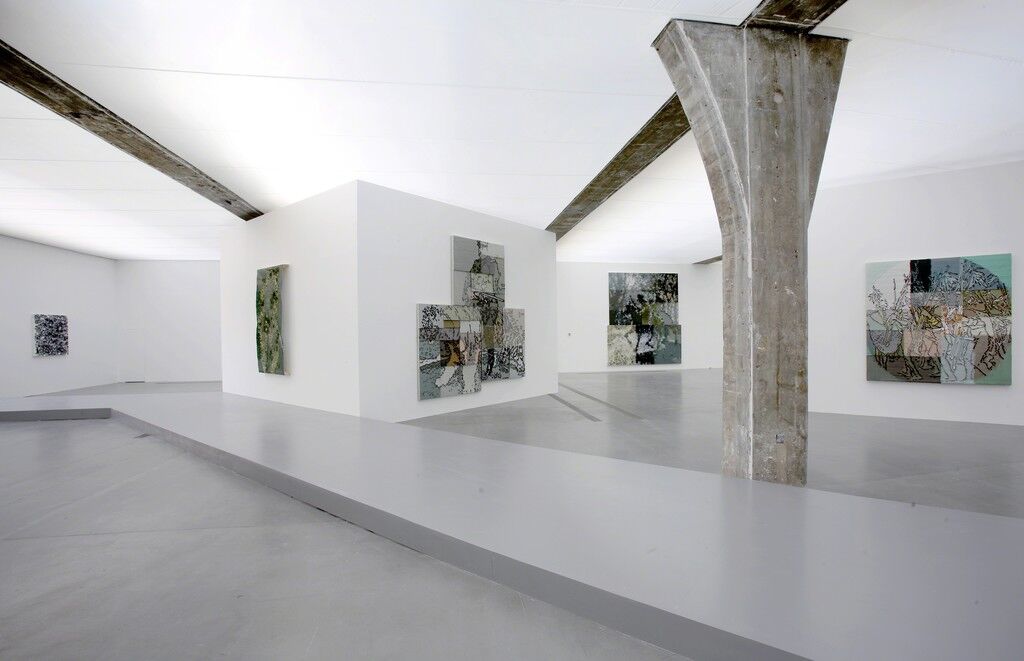 Also of note was Gallery Yang’s exhibition of 29-year-old artist
Yang Song
’s sculptures and installation “Askr Yggdrasils,” which is at once humorous and disturbing. The works see figures emerge out of the bulbs of soil around tree trunks and a vast wall of forest floor turned on its side. Some appear as if sculpted into the mud directly, others like ancient statues colonized by roots over hundreds of years.
Playing with this tension between past and present in a different way was Ink Studio, which shows new works of
Tai Xiangzhou
—paintings on silk and an installation modeled on an ancient, rotating Buddhist sutra.
“We’re just ahead of Art Basel in Hong Kong and we have this new gallery weekend in Beijing, but this is perhaps our most traditional show of the year,” said the gallery’s artistic director Craig Yee with a laugh.
A master restorer of
Song Dynasty
painting, Tai appropriates the era’s techniques in his own works, applying between 20 and 30 layers of ink to silk. Rather than classical subject matter, however, Tai’s collection of meteorites serves as subject matter for the nine-panel work that anchors the show. Placing the viewer in the midst of what feels like a primordial explosion of space rock, the work is a sharp reconfiguration of the Song philosophy, which posits the inseparability between human nature and the natural world. 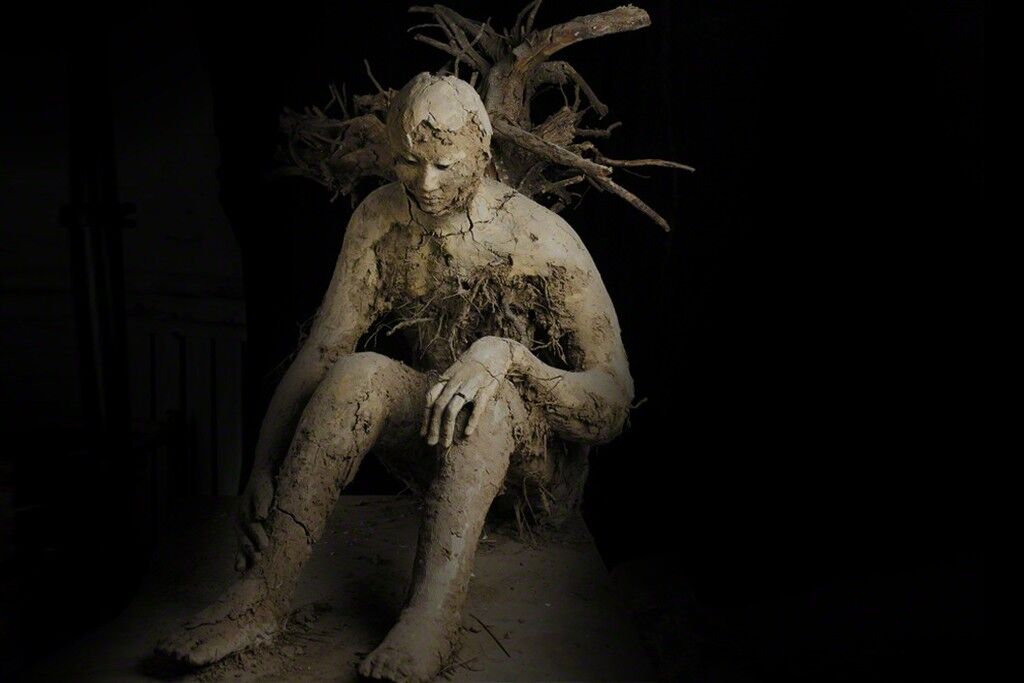 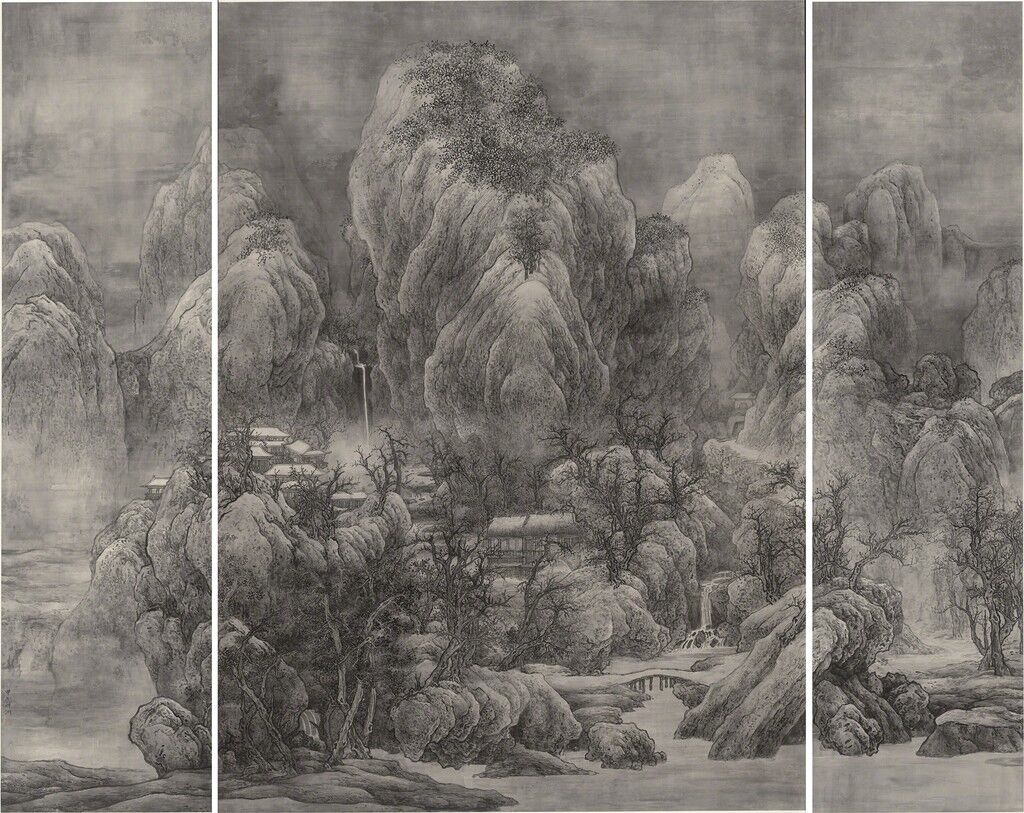 Tai Xiangzhou
Mountain of Heaven, 2014
Ink Studio
As the weekend wound to a close, M WOODS museum founders Lin Han and Wanwan Lei gave a tour of their current exhibition of the late French artist
Cristof Yvoré
. Curated by Wanwan, the show is a stark departure from the institution’s last, which featured a selection of
Warhol
’s films and Silver Clouds (1966), an installation of silver balloons that became a selfie sensation. Yvoré’s work, rather, is more contemplative and, at least in comparison to Warhol, fairly unknown.
Wanwan said she discovered Yvoré at an art fair several years ago and found herself haunted by the work—mostly still lifes painted from memory and facades of nondescript buildings—throughout the rest of the day. Forty-six of his paintings and 30 works on paper, representing nearly one-third of the artist’s entire oeuvre, are currently on view at the museum (three are from its permanent collection). Wanwan said they have been pleasantly surprised by the attention the show has received from its audience despite Yvoré’s relative obscurity.
Whether this indicates that the wider art-interested public in Beijing is growing increasingly sophisticated and moving beyond brand names remains to be seen. But efforts like Gallery Weekend Beijing play no small role in that process.
“We think it’s a success,” Wanwan said.
Alexander Forbes is Artsy’s Consumer Marketplace Strategist. He was previously the Executive Editor of Artsy Editorial.
Related Stories