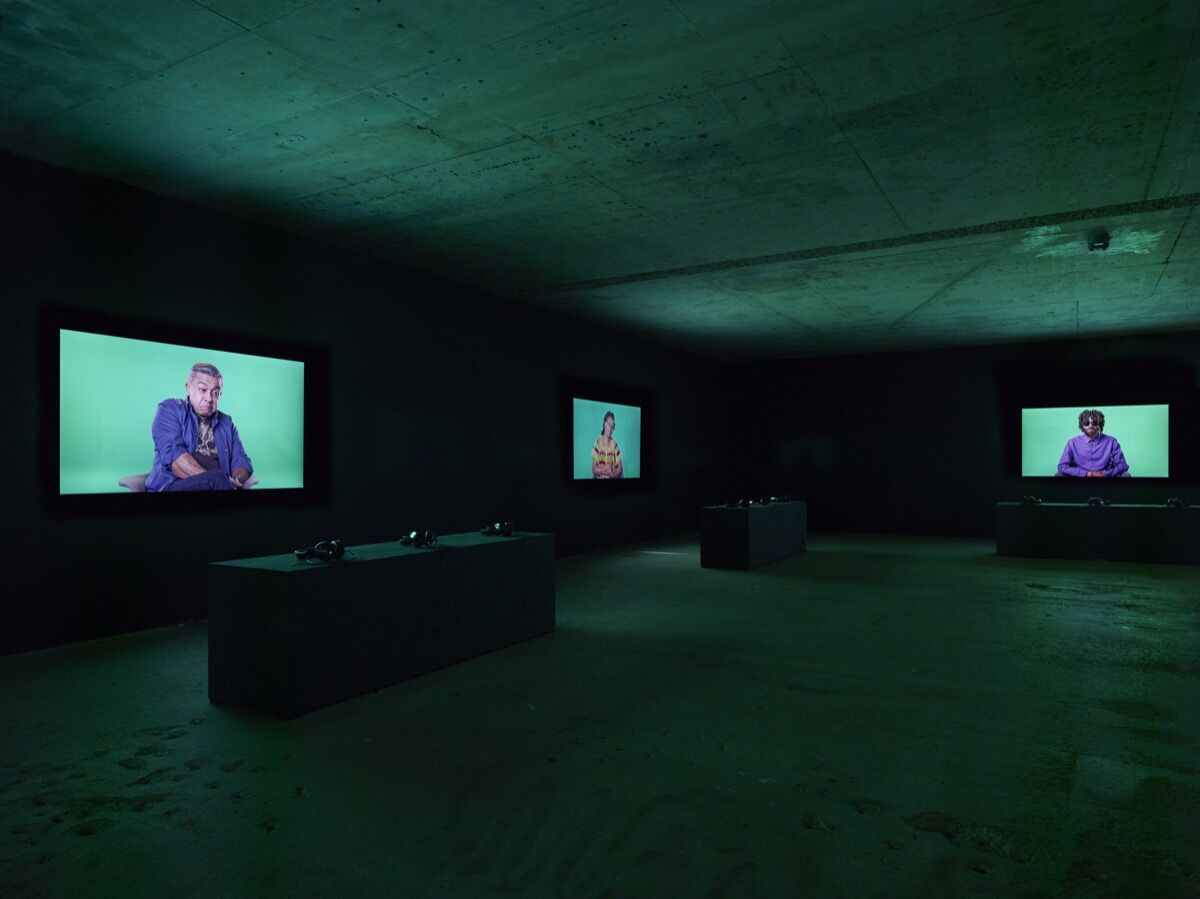 When I moved to Berlin in early 2010, there was a palpable sense that everything was about to change. Pretty much everyone who has moved to Berlin at some point over the last 20 years has had that feeling. Most get tired of waiting somewhere between two and eight years later. I lasted five. Returning to the city last week for the 13th annual Gallery Weekend Berlin, however, I soon realized that over the last two years everything has, in fact, changed—and most of it for the better.
Don’t get me wrong, all of Berlin’s galleries aren’t suddenly selling out their shows on opening night. The city is still not overflowing with collectors, and this edition of Gallery Weekend did suffer slightly in terms of international attendance due to the packed spring art-world calendar. But Berlin’s sidewalks are, suddenly, filled with an inordinate number of people dressed head-to-toe in Acne or Gucci, and its streets, filled with many more expensive cars. Economic opportunity in Berlin has grown in very visible ways. Rents have also increased, but they still remain low compared to other major cities, which means that the capital that comes with opportunity can be funneled into disposable income more readily than might be the case in New York or London.
A number of galleries I spoke to over the past week noted that this wave of new wealth in the city is beginning to trickle into their programs. One mid-level gallerist said he was in the process of bringing on one or two very young artists whose prices would be kept low to further encourage the emerging Berlin buyers to forego one or two outfits or a weekend away in favor of a work of art. 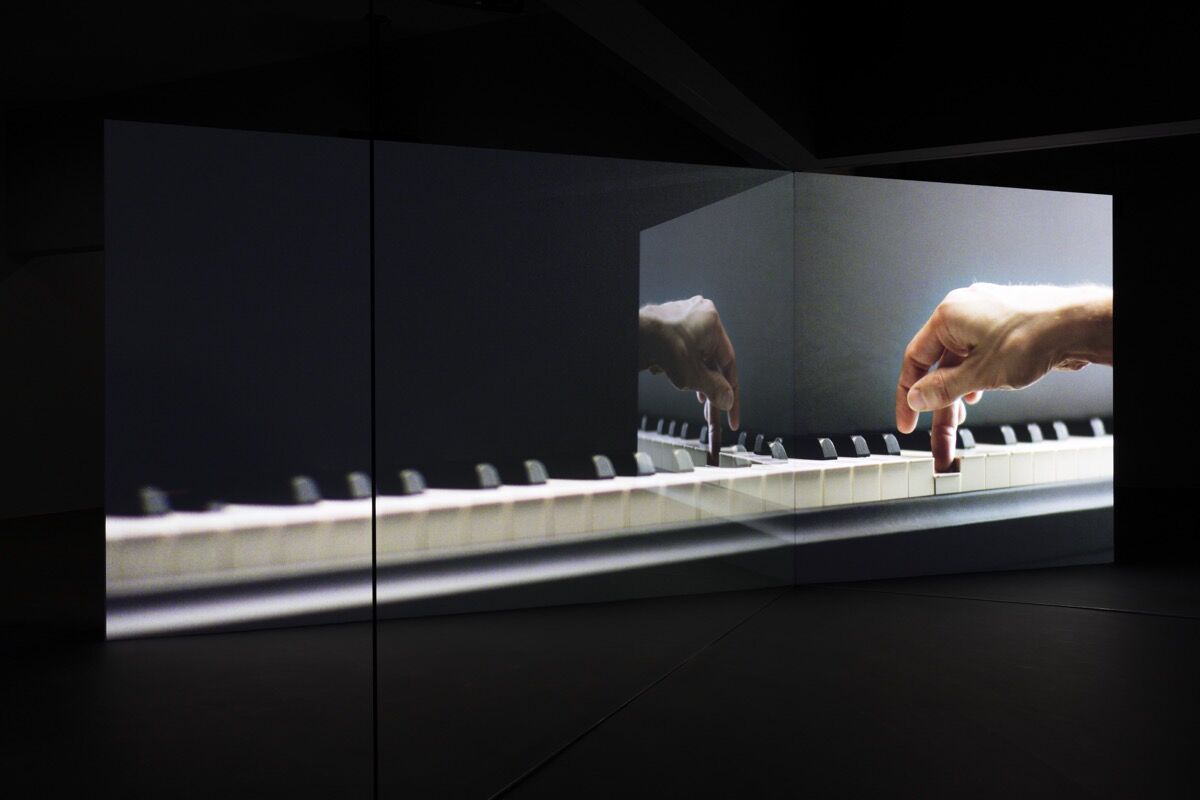 Installation view of Anri Sala’s Take Over, 2017. Photo by Andrea Rossetti. Courtesy of the artist and Esther Schipper, Berlin.

There was also more immediate evidence of change in the Berlin art scene during Gallery Weekend. Several galleries, including Mehdi Chouakri and Gerhardsen Gerner, have moved to new, more central locations that allow them to take better advantage of foot traffic—something which has never before been a concern in Berlin (there wasn’t much, if any).
Esther Schipper’s new, 5,800-square-foot, Annabelle Selldorf-designed gallery on Potsdamer Strasse, which opened on Thursday, shows yet another facet of the Berlin art scene’s changing face. The move marked not only an almost tripling of the gallery’s exhibition space, but also the culmination of her merger with Johnen Galerie, nearly all of whose artists are now officially a part of Schipper’s program. It also serves as a hallmark of sorts to Schipper’s rise over the past decade from a highly respected program, which has launched careers like those of
Philippe Parreno
and
Dominique Gonzalez-Foerster
(the pair led a toast in Schipper’s honor on Thursday night), to a global force—all without having physically expanded beyond Berlin.
The new space debuts with “Heavy Metal Body,” an exhibition by one of Schipper’s first artists,
Angela Bulloch
, as well as “Take Over” by former Johnen artist
Anri Sala
. The latter artist’s exhibition takes its name from a piece that is reminiscent in both scale and effect of Sala’s renowned work Ravel Ravel Unravel for the French Pavilion at the 2013 Venice Biennale. A projection wall and a glass wall form an X within the darkened space; on one side, a set of hands plays the Marseillaise, on the other, the Internationale, whose lyrics were originally set to the former’s tune. 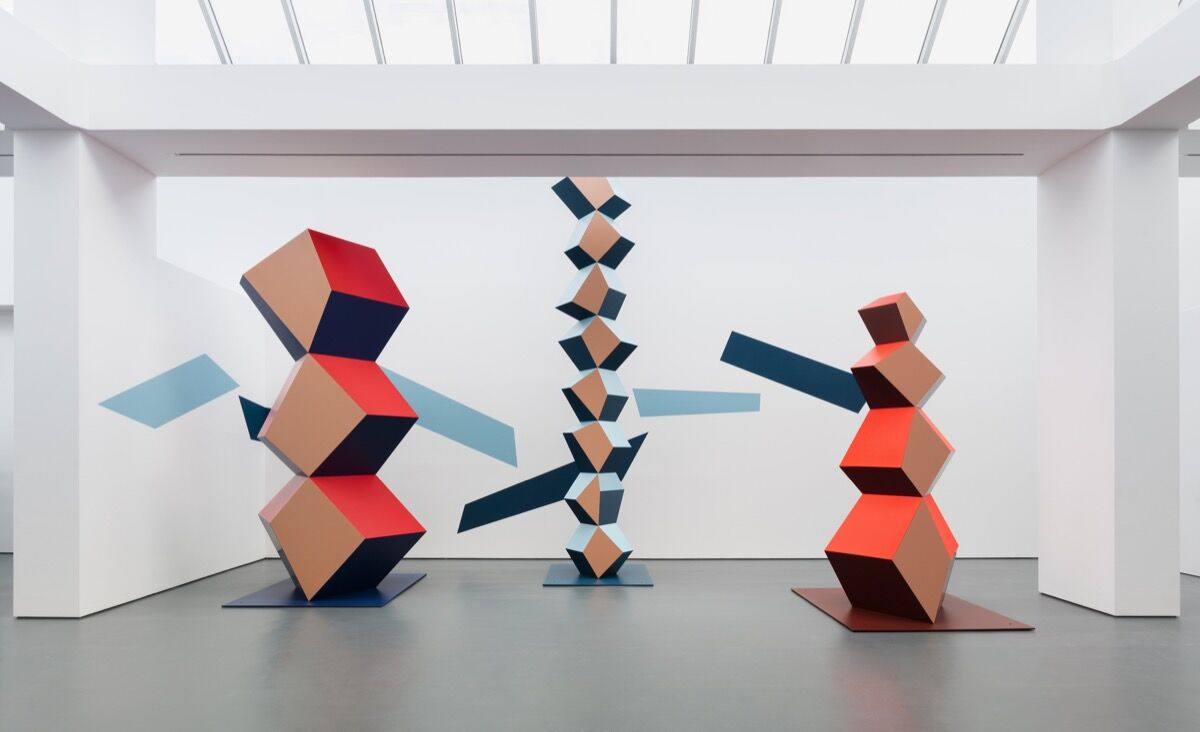 Installation view of work by Angela Bulloch, 2017. Photo by Andrea Rossetti. Courtesy of the artist and Esther Schipper, Berlin.

Advertisement
There were smaller milestones on view across Berlin too. KOW’s show featured
Candice Breitz
’s Love Story (2016), a seven-channel video, six of which include refugees who fled conflicts and persecution the world over. The seventh and largest screen features Alec Baldwin and Julianne Moore acting out portions of the other six films. Breitz left White Cube for this debut show with KOW. And the work, which was definitively the talk of Gallery Weekend Berlin, will be on view in the South African Pavilion in Venice, starting next week.
Love Story is, without question, the most powerful piece of art about the ongoing refugee crisis I have seen. One moment, you’re punched in the gut, as Moore (playing Syrian refugee Sarah Mardini, whose sister Yusra participated in last summer’s Rio Olympics) recounts jumping into the cold water after their boat ran out of fuel and began to sink. Yusra says she felt a responsibility to use her ability as a swimmer to try to bring the boat to shore. In another moment, you laugh as a sunglasses-wearing Baldwin (playing Farah Mohamed, whose life was in danger in Somalia due to his atheist beliefs) cracks a joke. The piece exposes these individual struggles but also a central issue facing refugees—as Mamy Maloba Langa who fled Kinshasa puts it, “The media is only interested in famous people; I don’t think all those nice people would come just to listen to my story.” It’s sad but true.
Guan Xiao
’s video Dengue Dengue Dengue (2017), on view as part of her second solo show with Kraupa-Tuskany Zeidler, was also among the weekend’s most impactful works. The three-channel work (her strongest format) jumps between internet clips of the New York Stock Exchange’s opening bell, cheerleaders practicing, Muslim men during the call to prayer, and mud-covered festival revelers. The unsettling piece points to habitual practices such as these and then jumps to a satellite shot of severe weather systems over California, suggesting that some of our manmade ills are the result of global, ritualized behavior. Rather than at Kraupa-Tuskany Zeidler’s east German office space-turned-gallery, however, it’s at the Boros Collection where you see the growing influence of their program. 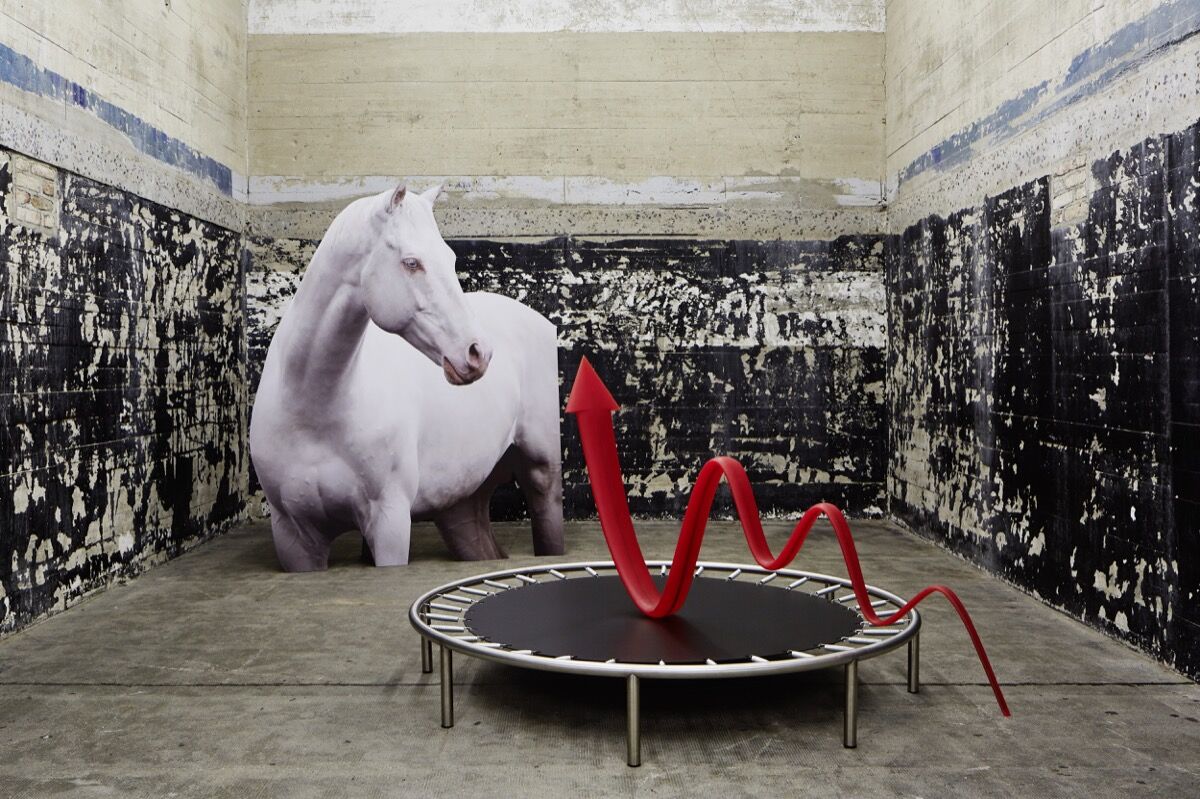 The third hanging of Karen and Christian Boros’s World War II bunker (opening to the public later this week, by appointment), gives two of its largest rooms to the gallery’s
Katja Novitskova
and
Avery Singer
(who also opened a show at the Kölnische Kunstverein this past week) and a smaller space to Guan Xiao. In previous hangings, these double-height spaces have been mainly reserved for major works by the likes of
Ai Weiwei
,
Olafur Eliasson
,
Thomas Ruff
, and
Tomás Saraceno
. And while some perennial favorites of the couple’s collection, like
Kris Martin
, retain a strong presence in the latest hanging, a much younger and much more internet-driven group of artists leads the conversation this time around.
It’s at once a departure for the collection and a return to form for Christian Boros. The third hanging features an extensive selection of works by
Michel Majerus
. The artist died in 2002 at the age of 35, but his paintings would not look out of place in a hip, young gallery whose twenty-something artists reflect on image culture and the internet—Majerus pioneered that kind of work two decades earlier. And, as evidenced in a piece in neugerriemschneider’s current show of his late works on aluminum—which, with his recently closed exhibition at Matthew Marks, commemorates the 15th anniversary of this death—Boros was there from the start. Look closely at one black and white work and you’ll see his name printed in the upper right, its cross-like image itself pulled from a campaign Boros produced for one of his first clients, the German music television channel Viva.
Amidst all this growth, however, one issue is that Gallery Weekend Berlin hasn’t grown itself. Most of Berlin’s galleries that are poised to be its next Kraupa-Tuskany Zeidler or Tanya Leighton or Societé aren’t part of the official list of 47 participating galleries this year. The gallerists among that missing cohort who I spoke to said that they can’t justify the weekend’s cost (around $10,000) based on what’s offered: primarily, inclusion in the official program, a BMW to ferry collectors to their next stop, and a number of invitations to Saturday night’s dinner. 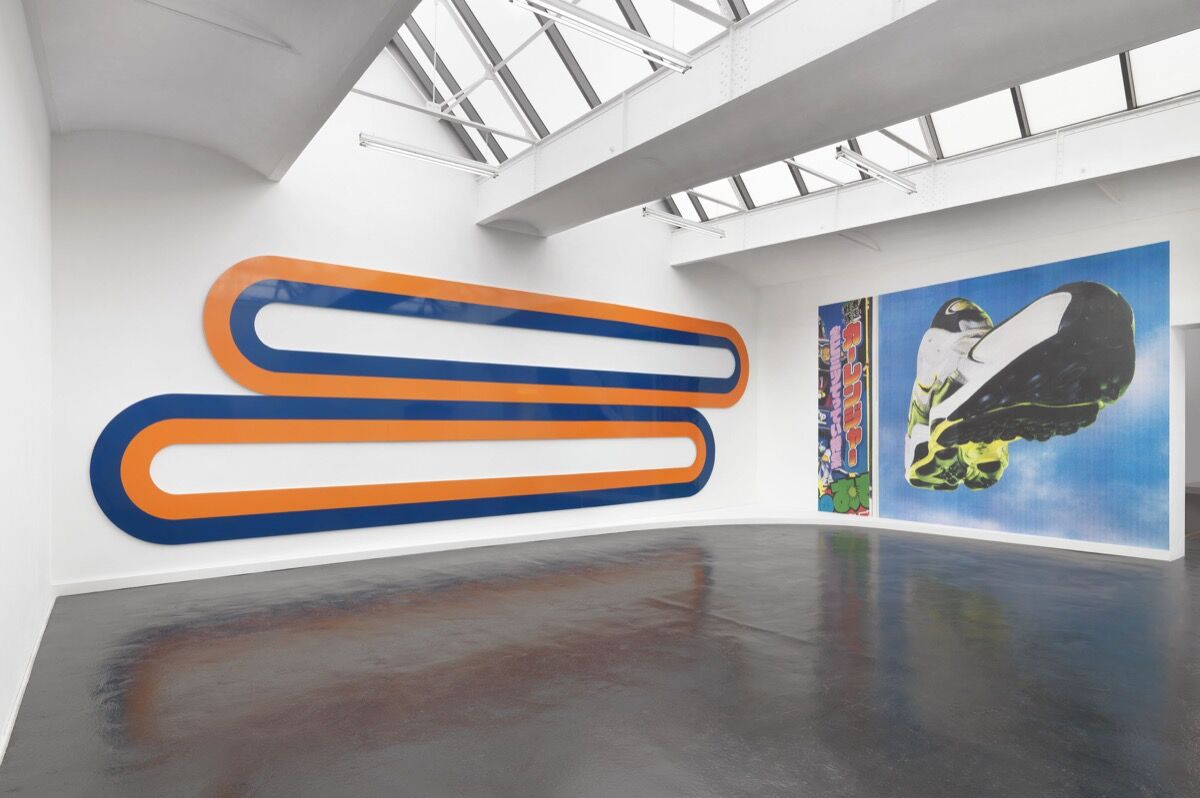 That is not a new argument levied by those who don’t participate. But with Berlin’s economic engine just getting going, now is an opportune time for its most powerful galleries to think strategically about how to avoid the rifts that have sometimes been endemic in the city’s art scene—and how to help foster the young programs that can service the city’s budding collectors. Some are already doing this quietly.
For Gallery Weekend itself, perhaps that means exploring ways to offer lower prices for galleries under five years old, such as allowing them to choose from a menu of the weekend’s typical offerings—including the dinner, which is, understandably the weekend’s greatest limiting factor in terms of both space and budget. Heck, the 25-plus interesting young Berlin galleries and project spaces that could add new blood to the weekend, might rather throw a party after the dinner than invite people to it at all.
With Gallery Weekend Berlin’s previously emerging galleries having grown up, not having that new blood gives an incomplete picture of the city’s art scene to visitors. That’s a good problem to have but one that needs to be addressed.
Alexander Forbes is Artsy’s Consumer Marketplace Strategist. He was previously the Executive Editor of Artsy Editorial.
Related Stories