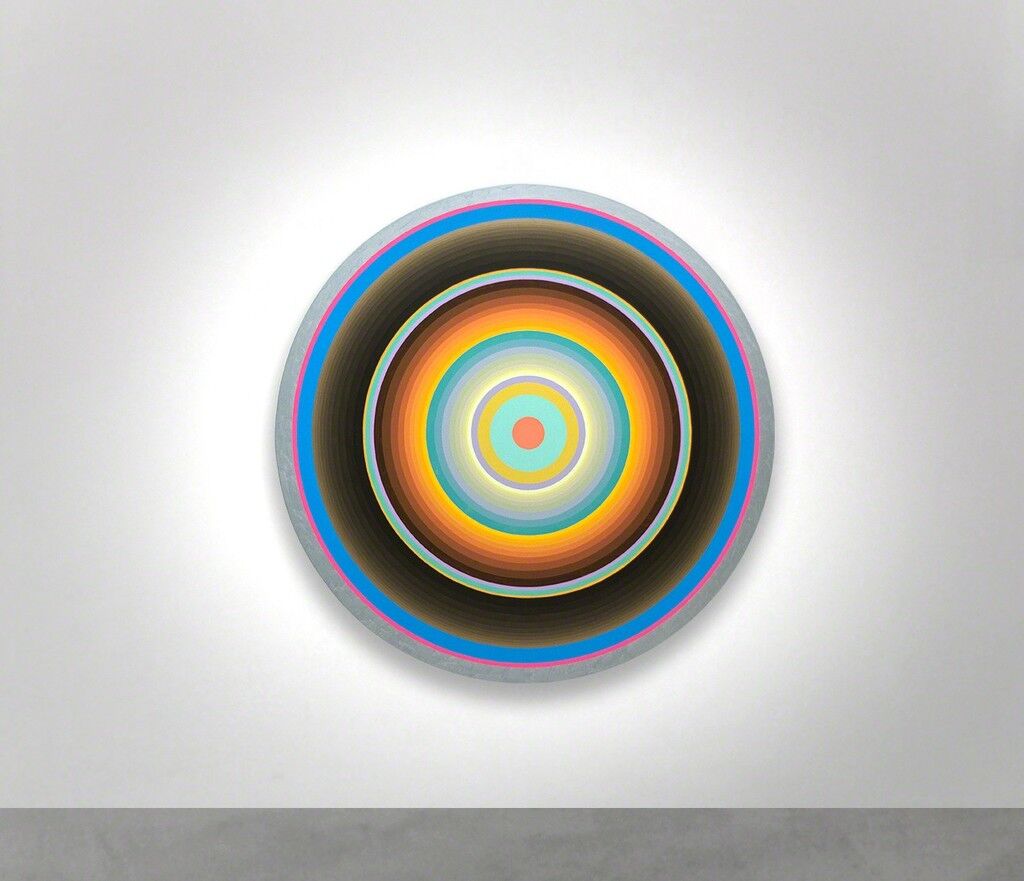 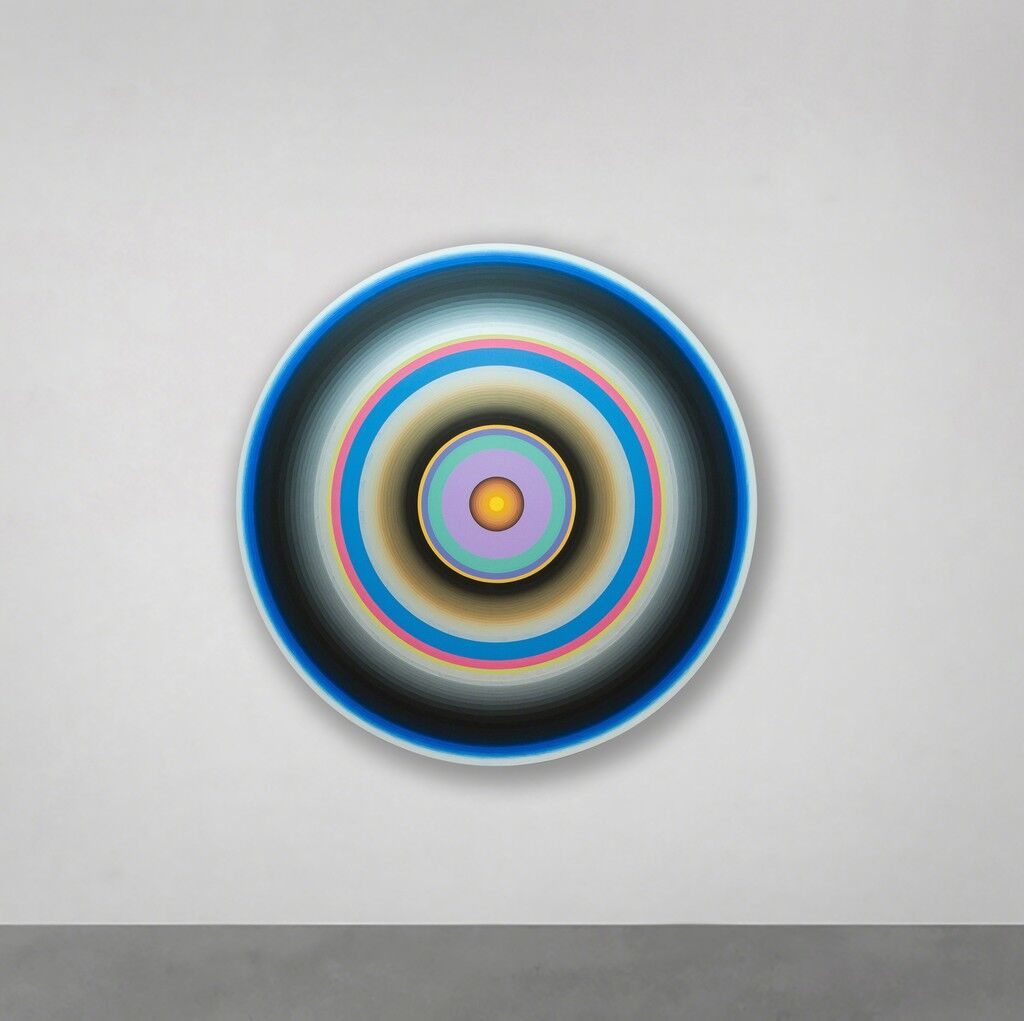 Gary Lang
BLUELIGHTHREE, 2015
KM Fine Arts
BLUELIGHTHREE and BLUELIGHFIVE (both 2015) present a spirited exploration of perception. Alternating rings of warm and cool colors fuse to generate a strong optical effect. The works resemble the eye itself—a series of psychedelic, multicolored irises. As critic Peter Frank explained in the show’s catalog, the “almost volcanic energy Lang invests in his art does not command and overwhelm his canvases, but seeps through their visual cracks, teasing and worrying the eye rather than ambushing or overwhelming it. As a result, Lang’s paintings do not erupt with fury; they hum with intensity.” 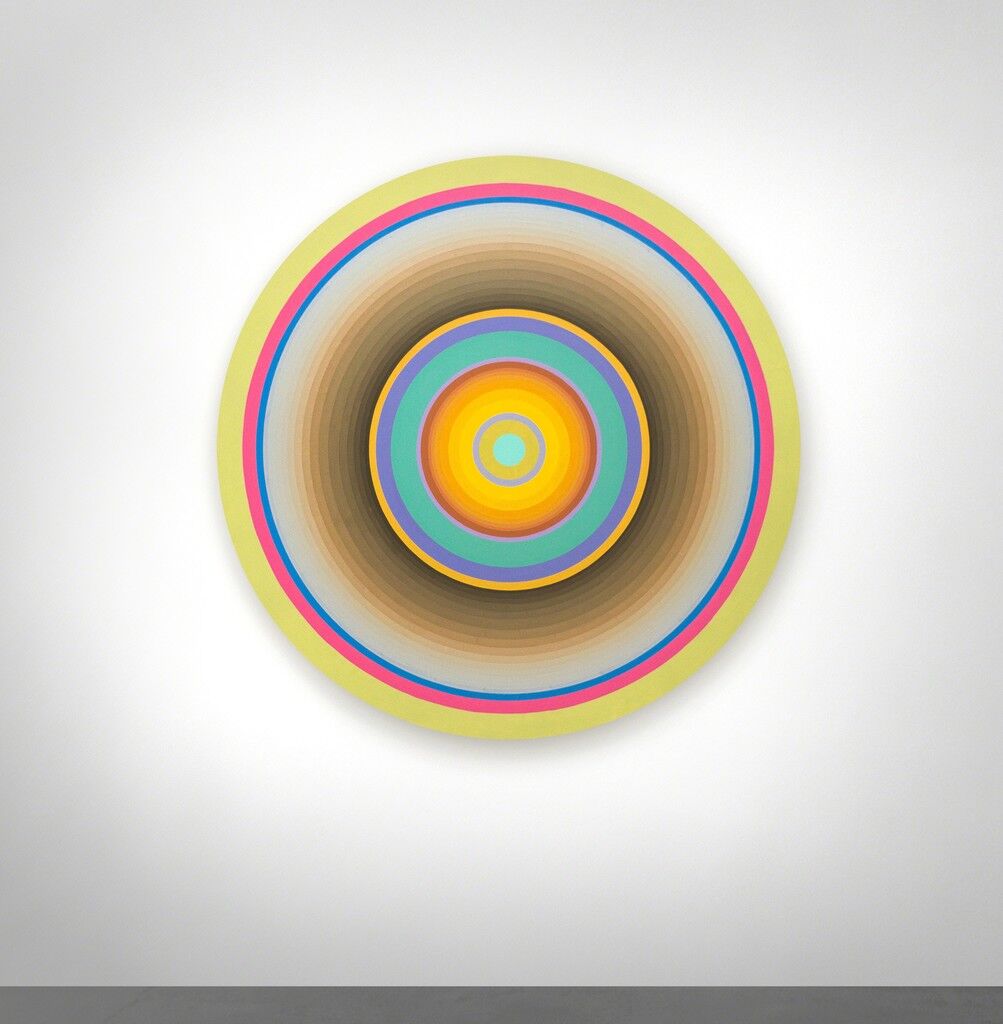 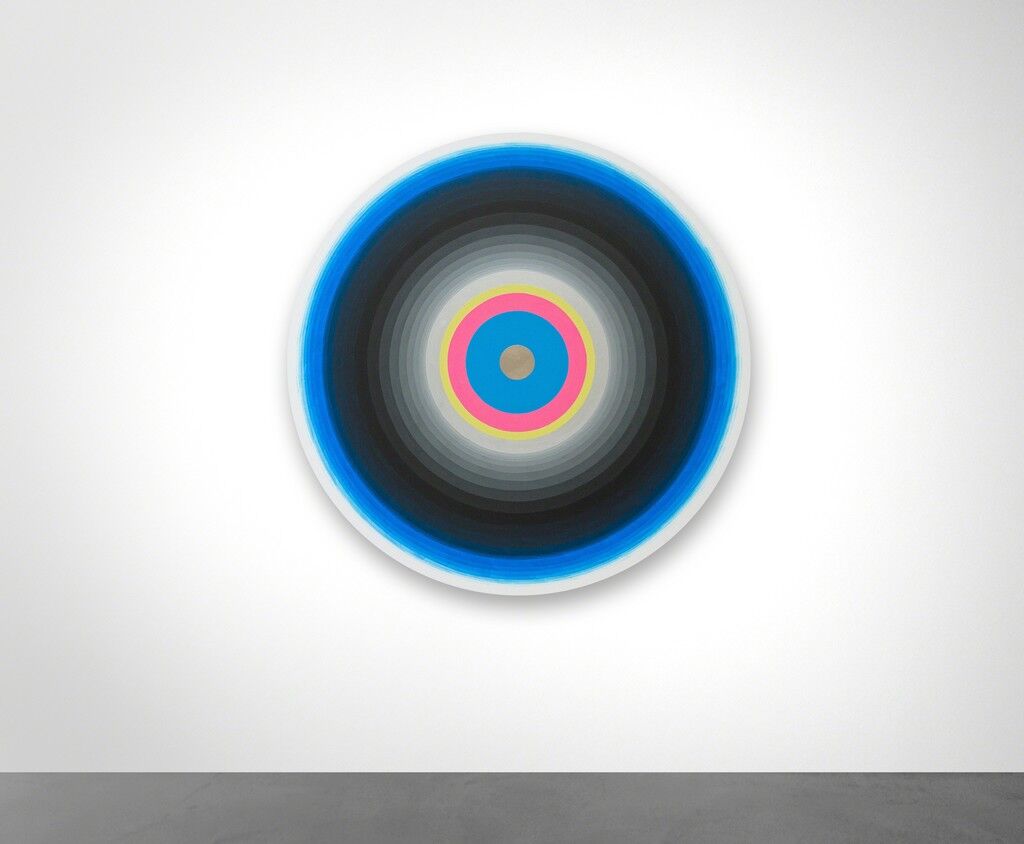 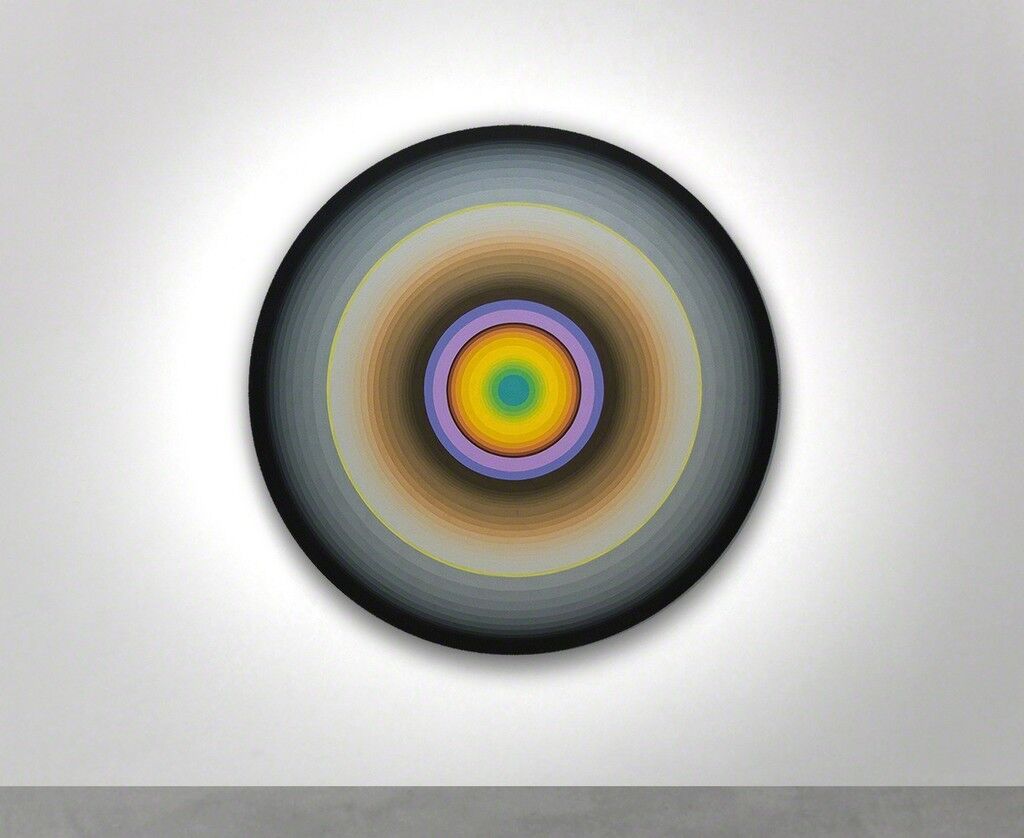 Gary Lang
BLUELIGHTTWO, 2015
KM Fine Arts
Lang’s other tondos employ similar color combinations—but with some noticeable deviations. For instance, BLUELIGHTFOURSAGE (2015) buzzes with warm colors, while BLUELIGHTTWO and BLUELIGHTSIX (2015) feature thicker dark rings and a cooler palette. Critic Donald Kuspit described Lang’s tondos as having “halo or aura” rings, drawing a comparison between his paintings and the domes of the Hagia Sophia. 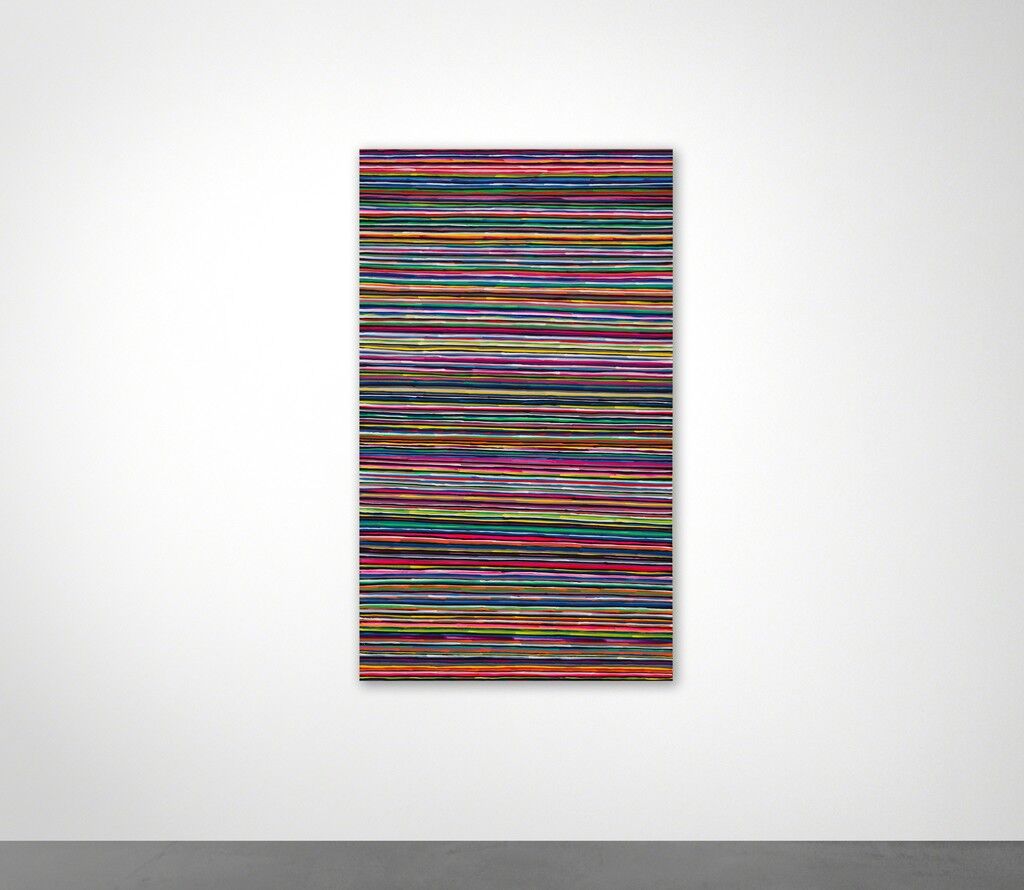 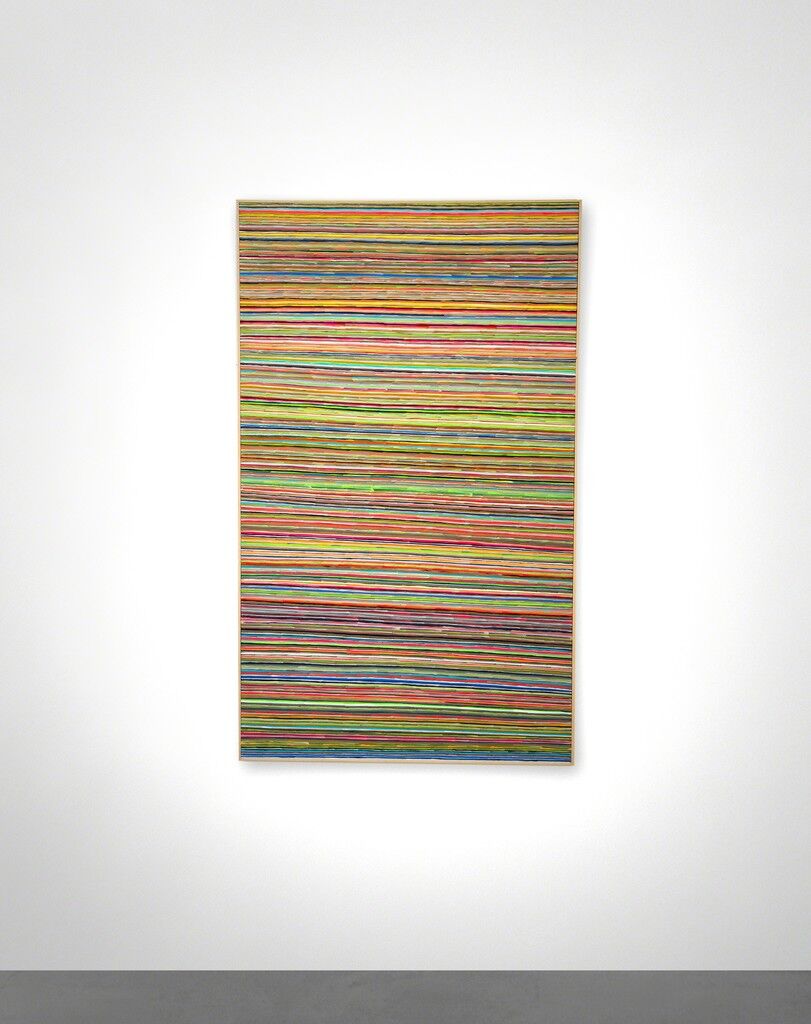 Gary Lang
METALINESONE, 2015
KM Fine Arts
Advertisement
Using the same format he employed for his tondo, Lang titles a series of line paintings with condensed phrases in all-capital letters, without spaces. The compressed patterns of lines and bold color combinations in works like LINESHAITIANIGHT (2015) and METALINESONE (2015) fit their compact, demonstrative names. Viewed together, these two paintings present an even juxtaposition of light and dark tones. Both canvases are marked by imprecise, truncated brushstrokes—revealing more of the artist’s hand than his smooth-lined tondos. 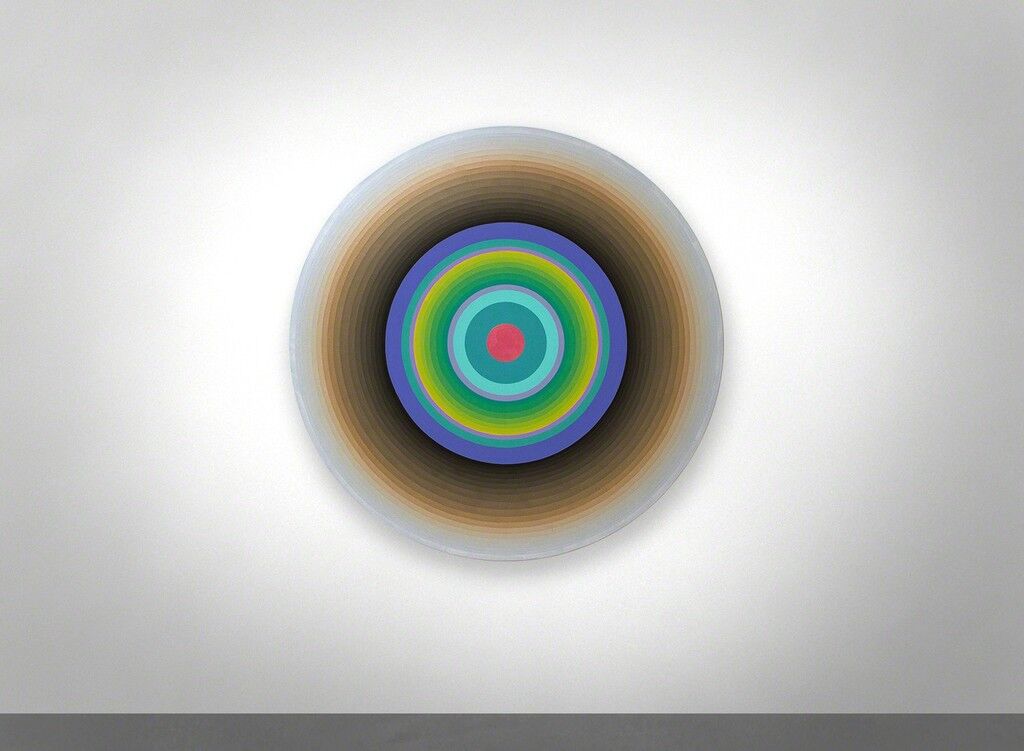 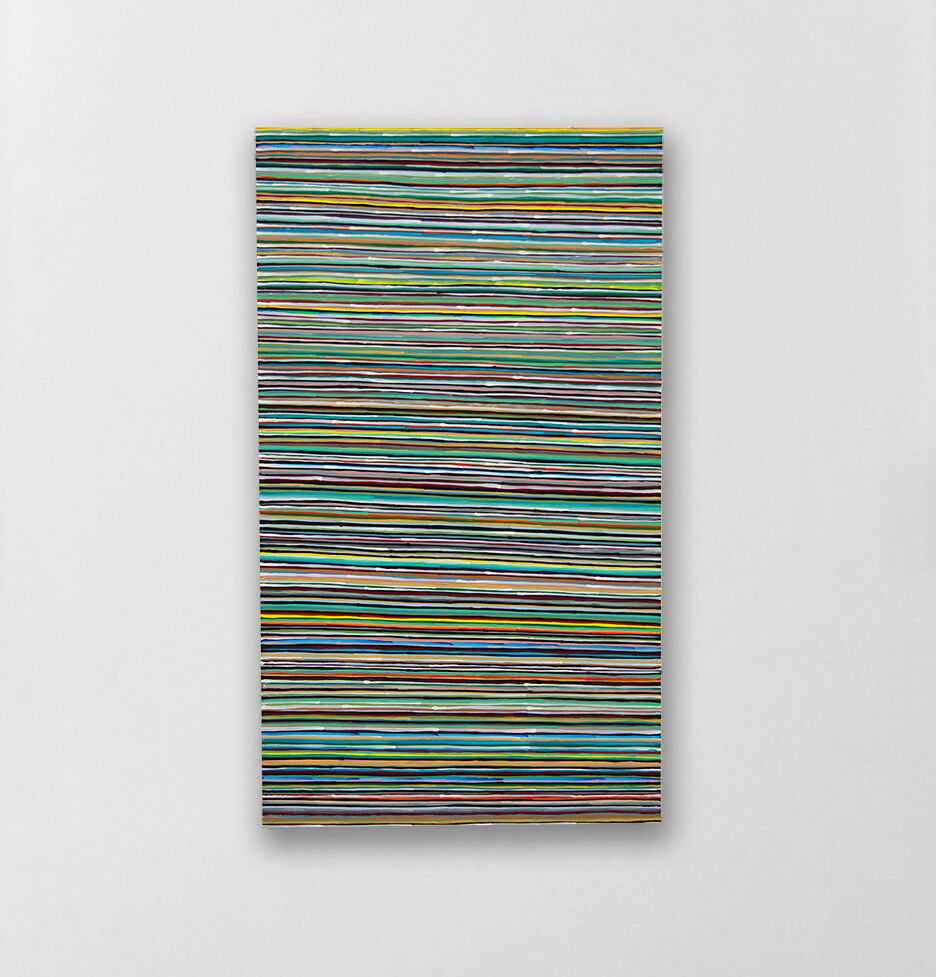 Gary Lang
LINESGREEN, 2015
KM Fine Arts
In an interview with Eric Fischl, in advance of the exhibition, Lang explained “I juggle colors and spatial ratios compulsively prior to painting in order to get a mutable footprint, and adjust and articulate my notations spontaneously once painting.” Evidence of this disciplined yet spirited practice can be found in Lang’s uniquely balanced, harmonious works.
—Anna Furman
“Circles and Lines” is on view at KM Fine Arts, Chicago, May 23–Jul. 25, 2015.
Follow KM Fine Arts on Artsy.
Related Stories