As Collectors Look to African Art, Accra Emerges as a Creative Hub

Ariela Gittlen
Jun 20, 2016 6:28pm
“Art was for losers, basically,” Mantse Aryeequaye, co-director of ACCRA [dot] ALT, a cultural platform promoting West African music and art, tells me with a smile. We’re sitting in the warm sunlight that streams through the open windows of Brazil House, the organization’s headquarters, in the Jamestown section of Ghana’s capital city, Accra.
The neighborhood was settled by repatriated West Africans returning from Brazil in the mid-1800s. These days it has a rough-and-tumble feel, its streets full of goats and children playing. “A few years ago, if you met a woman, you wouldn’t introduce yourself to her family as an artist,” Aryeequaye continues. Lately, though, there’s been a shift in perception. “Now people are able to see examples of successful artists like
Serge Attukwei Clottey
and
Ibrahim Mahama
, who are doing amazing stuff that you read about in the newspapers.”

The sprawling city of Accra is home to 1.7 million people. Street markets are bustling, and cabs and buses ride bumper-to-bumper through the roundabouts. It’s a city filled with churches and rimmed by miles of undeveloped beaches. Residents describe it as an “energetic” place, one where the pace of life is on the upswing. Music festivals abound. As Western collectors display increasing interest in contemporary African art, the first edition of Art Accra, an international art fair that will showcase 25 galleries from the continent and beyond, is set to open this December.
According to Aryeequaye, art in Accra is experiencing a renaissance, long after losing the government support it received in the late 1950s and early ’60s. Kwame Nkrumah, the first president of Ghana, oversaw the creation of the National Museum of Ghana in 1957 and the Arts Council of Ghana in 1961 (subsumed into the Institute of Arts and Culture a year later), and the country’s top art school bears his name. “Everything collapsed after Nkrumah was overthrown in 1966,” Aryeequaye says. “He understood the importance of culture and cultural production. Now we have to create our own infrastructure because there’s no longer state support.”
ACCRA [dot] ALT is helping to reinvent that infrastructure through their art space in Brazil House, events like the Talk Party Series—a monthly salon where creatives share their work—and the Chale Wote Street Art Festival, now in its sixth year. The festival is attended by over 10,000 people each year, and features 200 creators across art, music, film, dance, and performance. “There’s a new crop of artists now, living as artists, making money off their work,” says Aryeequaye. “Through projects like Talk Party and Chale Wote, we are able to position Ghanaian artists so that they are noticed by collectors and curators.” 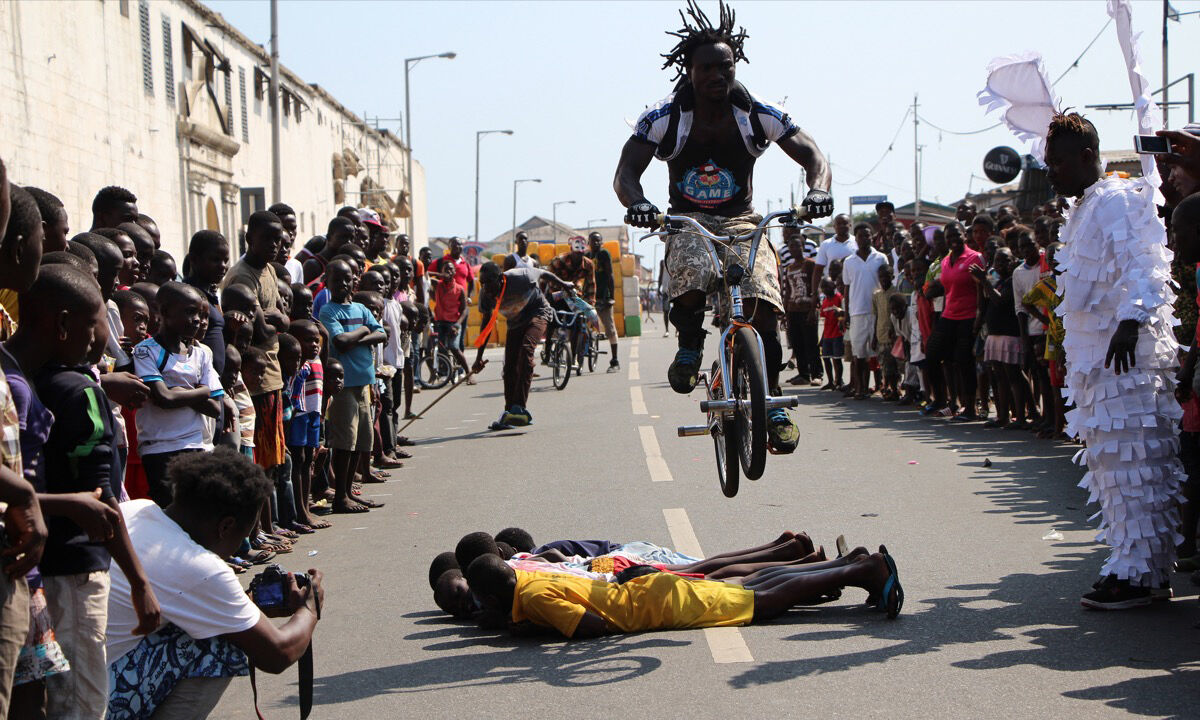 The Chale Wote Street Arts Festival in 2013. Photo by Kwabena Akuamoah-Boateng, via Flickr.

Advertisement
Other organizations support artists by creating opportunities to share and build skills, meet other artists, and find patrons. The nonprofit Nubuke Foundation has been promoting the visual arts in Ghana since 2006. Nubuke’s director and co-founder, Odile Tevie, claims that alternative art spaces have helped attract new audiences. One such success, she says, was an exhibition held inside the derelict Ussher Fort, a site used to traffic slaves during the 17th century, and repurposed as a prison in the 1920s. Anti-colonialist leaders were once jailed there. The exhibition featured artwork, including spoken word poetry and film, that reflected on the site’s violent past. “They didn’t want us to use that space, but it carried a lot of memories,” Tevie says. “The arts in Ghana are very small, so we have to push things out of here and into other institutions.”
Although there are more opportunities in the country, Accra’s art scene remains intimate, with just a few non-profits and even fewer commercial galleries. “It’s like a family,” says Nana Oforiatta Ayim, the multi-hyphenate curator and writer who plays an important role in the scene as founder of the cultural research center ANO and creative director of the newly opened Gallery 1957. Tucked away inside the Kempinski Hotel Gold Coast City, Gallery 1957 doesn’t immediately suggest the most accessible experience. Ayim, however, is adamant that every gallery exhibition will have a related public artwork. “Art ought to be activated, not cut-off from life,” she explains. “As a doctoral student, I was really fascinated by [West African] festivals. The cloth is there, the drumming is there. I’d go to the British Museum and find the drums or the masks or the cloth that I’d seen in a festival a month ago, but behind a glass case, whereas in a festival it’s completely alive.”

Zohra Opoku
’s self-portraits, screen-printed on cotton wall-hangings, are currently on view at Gallery 1957 alongside her sculpture and video. Opoku, who is of German and Ghanaian descent, strives to incorporate both aspects of her heritage into the work, adding German embroidery to the borders of her fabric prints, for example. Small sculptures made from found wooden boards, painted with motifs borrowed from kente cloth—the designs of which originate with the Ashanti people of West Africa, her father’s region—are a nod to her training as a fashion designer, as well as to her family tree. In her self-portraits, the artist’s face is obscured by foliage or textiles, suggesting a shifting or layered identity.
Opoku also creates public installations using discarded items circulated between Ghana and the West. She drapes billboards with layers of second-hand t-shirts that have been donated in the U.S. or Europe and exported to West Africa. Opoku was surprised by both the growth of the industry and the clothes themselves. “Sometimes I was shocked by what was written on those clothes,” she says of the garments, which often come emblazoned with Western logos, brands, or other crude messaging. “It seemed so out of context, even disturbing.” Opoku also taught a class based upon her research, inviting students to pick from the imported clothing and recontextualize it, using it to create something personal.
It’s perhaps no coincidence that Opoku’s work—which extends beyond traditional mediums—shares DNA with celebrated Ghanaian artists Attukwei Clottey and Mahama. Many of Ghana’s younger artists are gravitating towards installation and performance, and addressing social and economic issues. Attukwei Clottey creates large-scale sculptures from the yellow plastic gallon jugs used to carry water in Ghana, where many do not have reliable access to it. “We carry the gallons from the dump sight to the studio while wearing women’s clothes, to mimic how women struggle, how they deal with the water issue,” Attukwei Clottey explains. “People are curious and it creates a dialogue.” Mahama, who is known to wrap whole buildings in old jute sacks, as he did the city’s National Theatre in March, also documents the conversations and negotiations related to the labor and installation of his works. 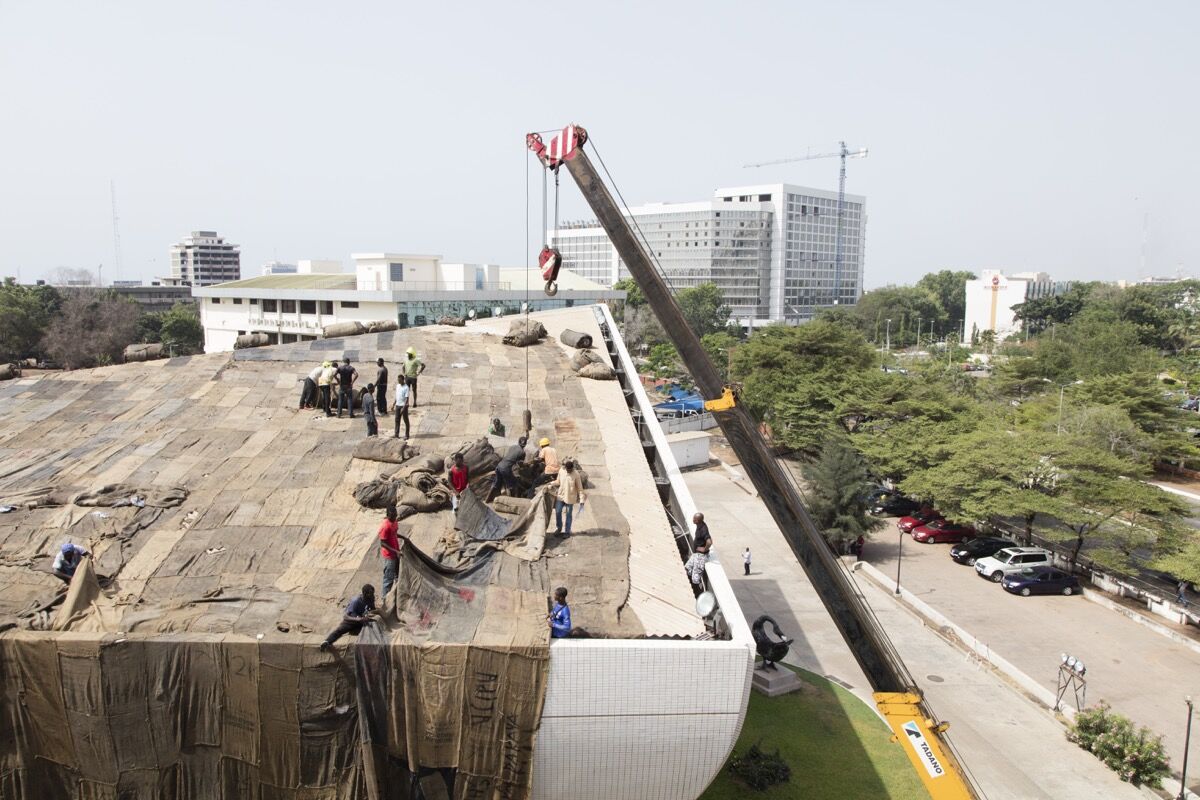 Modes of recontextualization and adaptation lie at the core of many artists’ and directors’ work in Ghana today. Aryeequaye and the ACCRA [dot] ALT team believe that creating the conditions for artists to make a living from their art could make a big impact across the country. “We’ve shown a model where we can create an arts economy, and now we just need some capital injection to make it happen,” Aryeequaye says. “It will cause an economic turnaround in Jamestown. And once there’s an economic turnaround here, it affects the whole city. Not just the city, but the whole country. The cultural capital here is outrageous.”
Ariela Gittlen
Related Stories

1:54 Is Providing a Crucial Platform for Contemporary African Art 1:54 Is Providing a Crucial Platform for Contemporary African Art
Tess Thackara
May 6, 2016