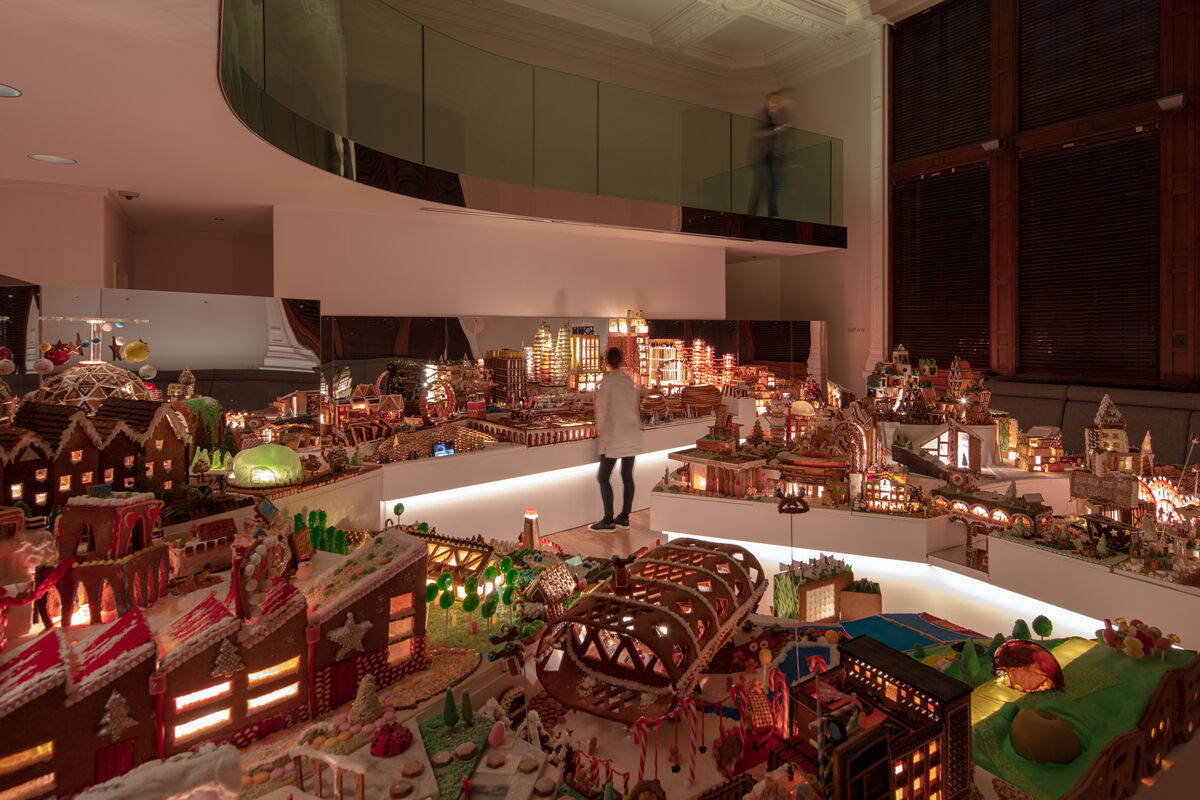 You can smell “Gingerbread City” before you see it.
The aroma of spiced confections fills the nostrils upon approaching the festive exhibition. Then come the chimes of Christmas jingles, before your eyes begin to feast on the main attraction: a multifaceted, futuristic city, made entirely of gingerbread and sweets.
Organized by London’s Museum of Architecture, and held at the Victoria and Albert Museum, the third annual “Gingerbread City” has again recruited leading architects, engineers, and designers from around the U.K. to design and build gingerbread marvels.
This year’s sugary civilization is bustling with an eclectic mix of gingerbread skyscrapers, ski chalets, amphitheaters, and amusement parks; within it, tiny gingerbread people ski the slopes, swim in rooftop pools, and lounge on Sugar Mountain. And though it’s all good holiday fun, this year, over 70 teams designed their inventions around the central theme of “Imagining the Future City,” where sustainable urban planning meets gingerbread. 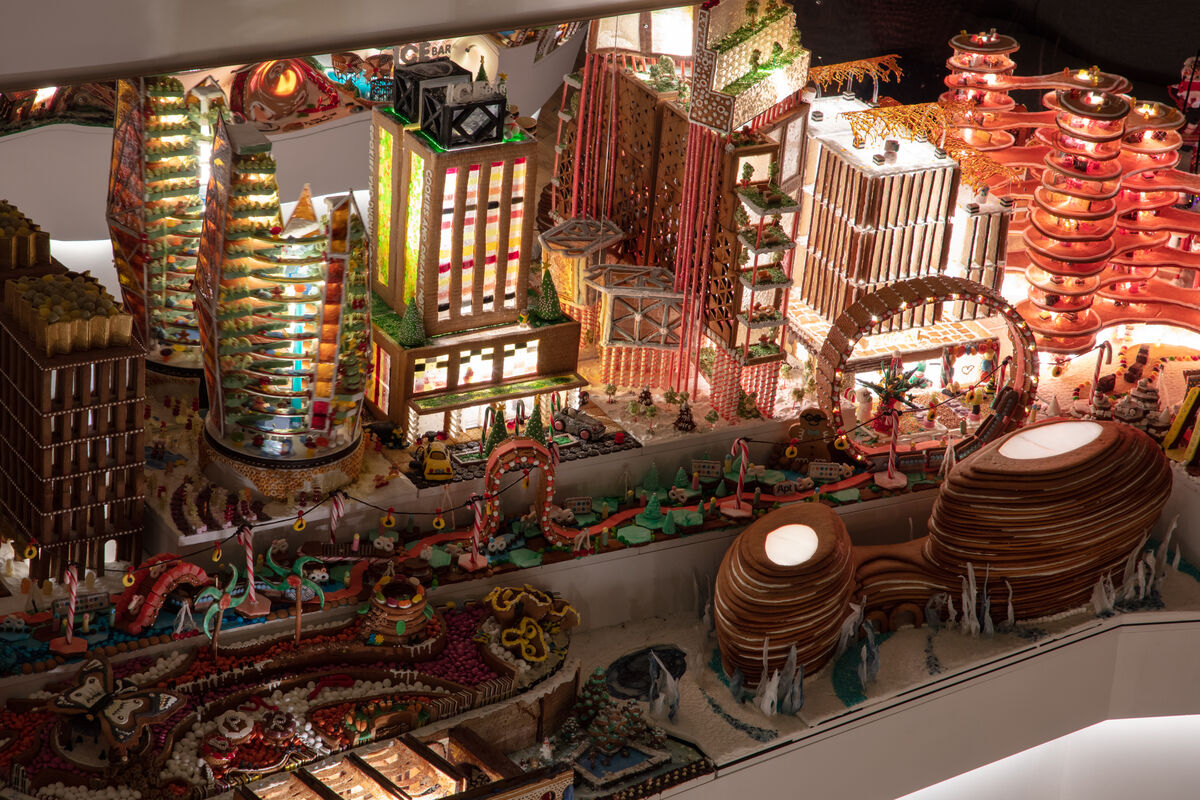 “It’s about bringing architecture into an easier context, so that a wider audience can engage with it,” noted the Museum of Architecture’s assistant curator Florence Maschietto. For those inspired by the exhibition, which runs through January 6th, gingerbread house–making workshops take place throughout the event’s run.
Visitors can examine the city in its entirety from a mezzanine above, or ogle its intricate details from ground level. The city has been organized on three different islands, noted Maschietto, so that designers could also create bridges between them. The layout corresponds to the building types, where one side is concentrated with high-rise structures, while the other brings together more intimate structures that viewers can peer into (while fighting the temptation to take a nibble).
Creativity shines throughout the city, though among the highlights is the Curdzon Cinema by PLP Architecture. The multipurpose design crosses a lemon farm with an open-air cinema, where a giant gingerbread man is projected onto the screen.
Design firm BDP used gingerbread to put a novel spin on university architecture with its Uni-Beurre-sity Campus. The central building is a “glowing lecture theater,” explained Beth Bourrelly of BDP, and around the edges, there are flexible spaces for learning. The structure playfully echoes the firm’s design for the impressive Hive in Kew Gardens, and Bourrelly added that “it’s based on a teaching and learning building we are working on at the moment for the University of Birmingham.” 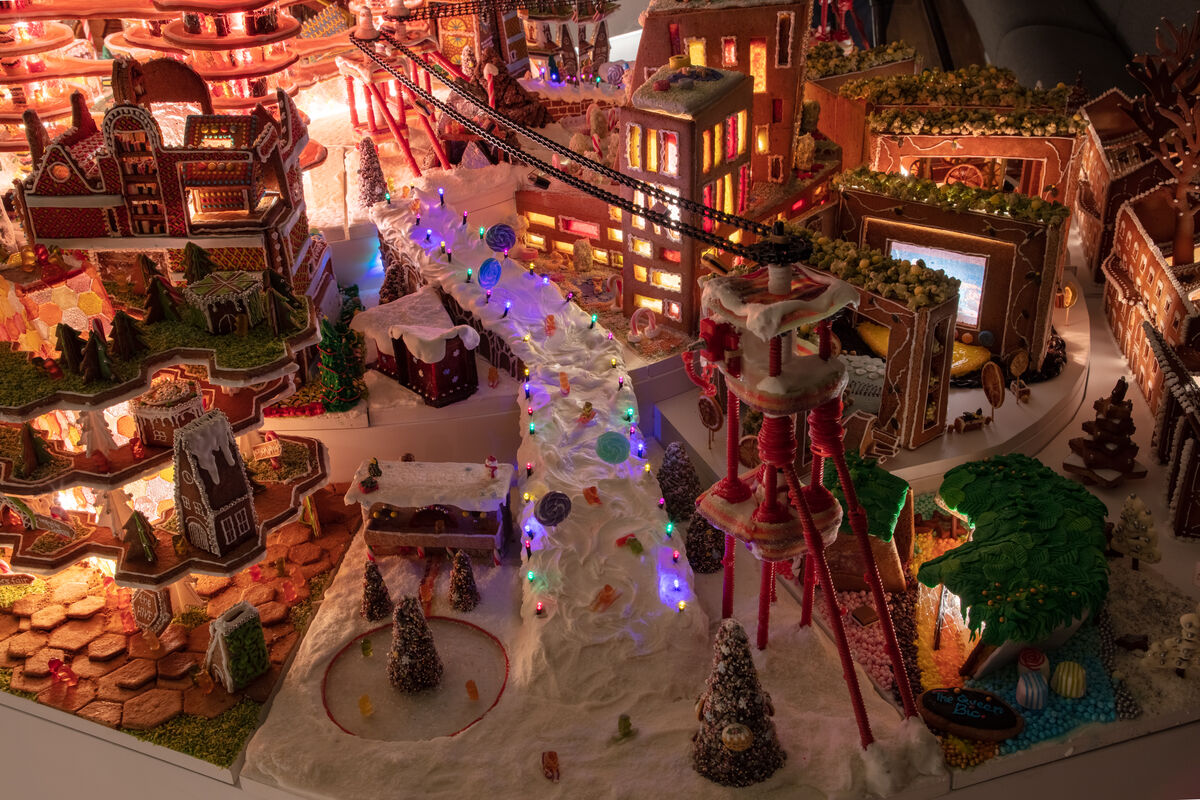 Advertisement
For younger gingerbread students, there’s Pastile School by Burwell Deakins Architects—any sugar-loving child’s dream school. Alongside a playground filled with games, the school’s roof is host to a football pitch and vegetable garden with patches of peas, carrots, sweetcorn, and cabbage (made from sugar and candies, of course). Nearby, the Recover Bee zoo features a central honeycomb gingerbread house, surrounded by a crowd of gingerbread rhinos, reindeer, and giraffes.
The city truly succeeds in its attention to social spaces. Take, for instance, the Hot Cross Pub, designed by LSI Architects, which came up with the design concept of a factory–turned–ice pub. Home-brewed beer pours from the exterior walls into what the architects dub the “Lazy Beer River,” on top of which tiny gingerbread men float on Haribo rings. “It’s supposed to be a microbrewery in the back and growing our own hops on the side,” explained architects Leanne Ackrell and Megha Paudyal, “so it’s a whole sustainable brewery process.”

8 Images
View Slideshow
Amidst the ginger and icing, though, many creations have earnest political underpinnings. Holland Harvey Architects embraced the exhibition’s theme by addressing homelessness in the U.K.; the firm crafted designs for temporary homeless shelters.
Nagan Johnson Architects used the platform to send an ominous message. Their design, TheRocky Road to Somewhere, is a structure that’s split in two, where one side is defined by walls and borders; the words “time for an EU turn” are written on a gingerbread wall, amidst burnt ruins. And the alternative path is far less bleak, showing a world that promotes sustainability, where gingerbread residents live together harmoniously. 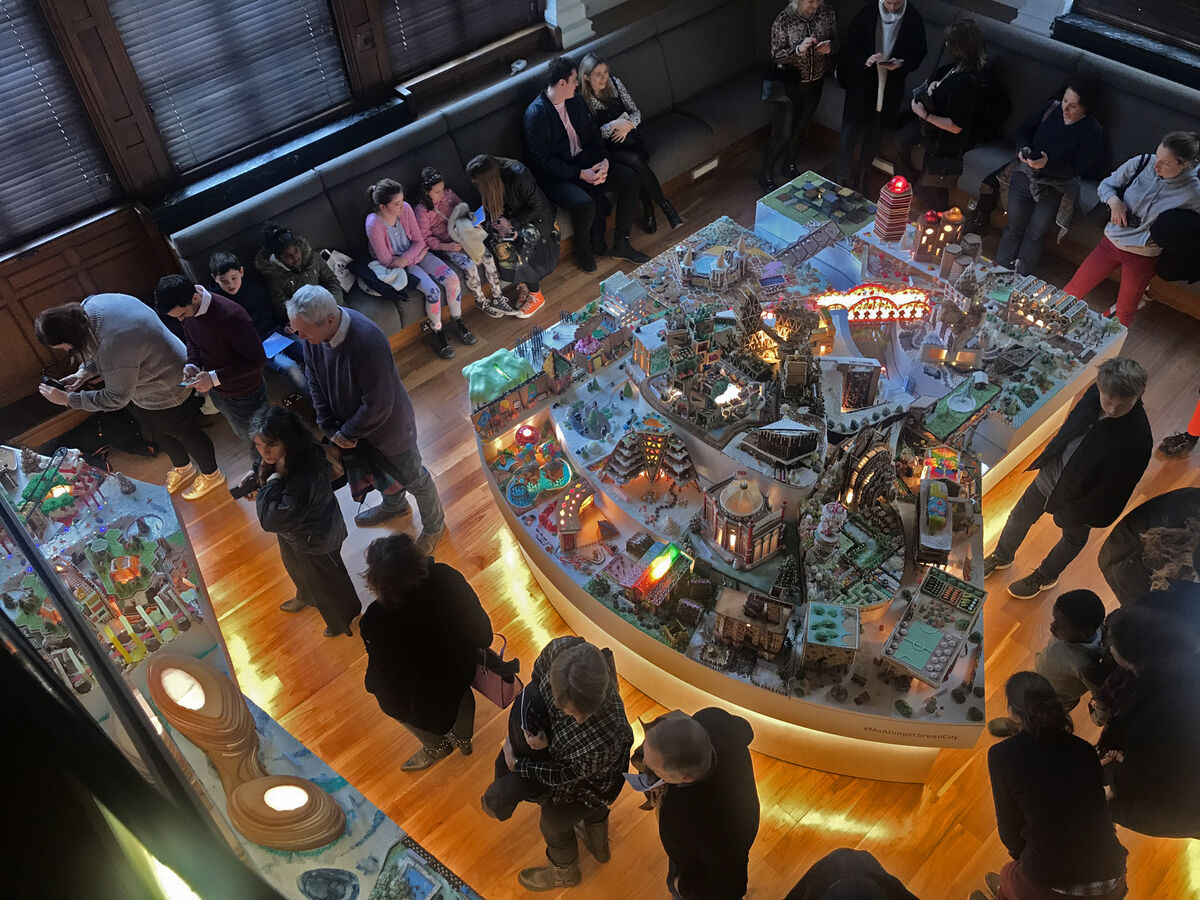 Other designs reflect how buildings today are designed with the environment in mind. At Sugar Crystal Tower by NBBJ architects, a sugar-paneled skyscraper rises up alongside plants and flowers. “The concept is that we have these three geometric sugar crystals connected by a series of halos, and around the halos and chambers there are green spaces—ponds, vegetation, and farms,” explained Jordan Hughes, concept designer of the project.
The structure even rotates, so that all of its sides are on view. “The rotation is to do with the fact that there is no front or back,” Hughes explained. “It’s a holistic design, which gives a sense of movement; over time, it will always be changing because the vegetation will start to overcome the architecture.”
The city unites under the salient issues it raises, namely the importance of community and sustainability within an urban space. A phrase frosted onto one gingerbread bridge may sum up “Gingerbread City” best: The architects triumph in “baking the world a better place.”
Georgia Beeston
Related Stories