How the Glitz and Excess of the 1980s Shaped Contemporary Art 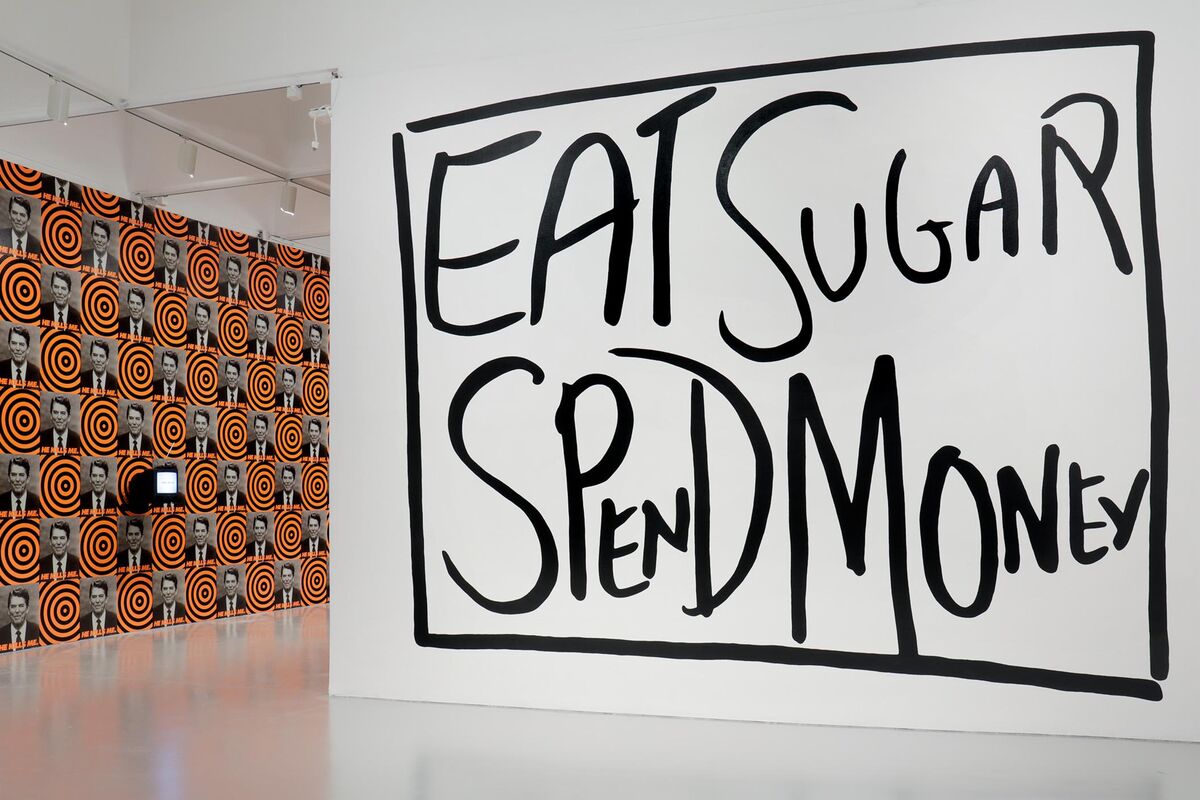 In 1975, with New York City on the verge of fiscal collapse, the New York Daily Post famously riffed on the president’s decision to not lend federal funds: “FORD TO CITY: DROP DEAD.” While the ’70s are historicized as a time of manufacturing collapse and white middle class flight, the 1980s are conceived as a boom era of neoliberal capitalism—a “material world,” as Madonna intoned.
Like the rest of society, art underwent a paradigm shift. But perhaps less understood is the fact that art was also a model, a culprit even, for these tectonic changes. A new exhibition at Washington, D.C.’s Hirshhorn Museum and Sculpture Garden, “Brand New: Art and Commodity in the 1980s,” surveys a group of almost 70 artists who were working in New York’s Lower East Side during this crucial period: a time of stock-market speculation, rapid globalization, and vast accelerations in consumer and media culture.
Though
Marcel Duchamp
’s readymades had brought objects into the art fold in the early 20th century, and
Andy Warhol
’s paintings and sculptures engaged product and packaging in the ’60s and ’70s, the LES artists of the ’80s were revolutionary for employing actual commodities in their practices, and for turning themselves into brands, whether for material profit, critical reflection, or both.

Advertising’s aesthetics and strategies were embraced by artists like never before.
Richard Prince
, whose Untitled (Hand with cigarette and watch) (1980) is to be found at the Hirshhorn, rose to prominence by appropriating the Marlboro Man and other ads, while
Jeff Koons
’s New! New Too! (1983) signifies the artist’s interest not only in commercial visuals, but also in the concept of the new, a cultural obsession that defined the decade.
These works and artists represent the subsumption of pop and capital into art, but also the radical transformation of the art market itself: the complete commodification of the artwork, enabled by New York’s bursting one-percent and the stratospheric ascendance of artists as celebrities and financial elites. However, placed among works by other, less commercially successful artists—working at the same time and in the same place—a clearer portrait of the time comes into focus. Indeed, it’s the lesser-known artists present in this exhibition, those working in DIY currents and resisting the newly titanic entertainment complex, who help to conjure a more minor history of this art scene.
The ’80s were also a time when non-male, non-heteronormative artists started making their way to the front of the art world. The significant selection of female artists at the Hirshhorn addresses the strides made:
Jenny Holzer
’s The End of the U.S.A. (1979–82) is a stark call-out of exploitative hyper-capitalists, while
Barbara Kruger
’s iconic photographic silkscreen Untitled (I shop therefore I am) (1987) interrogates consumer desire and the making of the self through purchase. 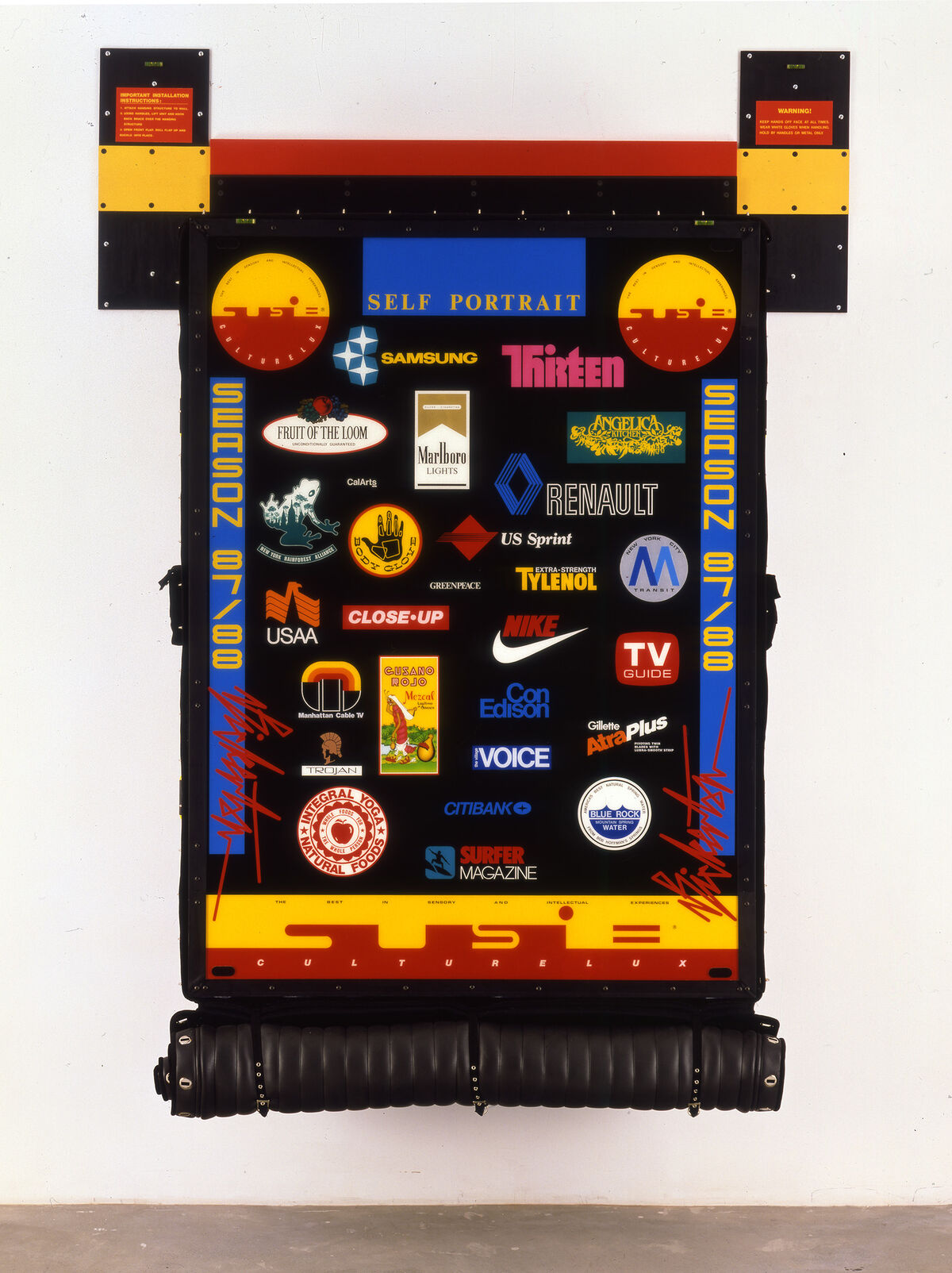 Ashley Bickerton, Tormented Self-Portrait (Susie at Arles) No. 2, 1988. Courtesy of the artist and Lehmann Maupin, New York and Hong Kong.

Advertisement
Then there’s
Ashley Bickerton
, an artist who hasn’t received the same level of institutional attention as peers like Koons or
Peter Halley.
Bickerton’s mixed media work, titled Tormented Self-Portrait (Susie at Arles) No. 2 (1987–88), went beyond appropriation and re-signification of commercial imagery by creating a totemic tableau. The brand names include not only mass market consumer products—Marlboro, Fruit of the Loom, Nike—but also publications, leftist NGOs, and infrastructure brands, such as Greenpeace and Con Edison.
The work highlights the proliferation of branding across all fields of life, by companies committed to liberal values and those that are meant to be neutral. Bickerton was pushing boundaries by not just commenting on larger cultural shifts, but also examining the new personal subjectivity that was emerging around a constellation of products, services, and lifestyle marketing.
Other lesser-known artists have compelling work in “Brand New” as well, hinting at the formal and perspectival changes happening in art.
Allan McCollum
, a self-educated artist who was questioning the uniqueness ascribed to artworks, created 40 Plaster Surrogates (1984), a huge series of objects that appear like paintings but which are actually blank, theatrical stand-ins for such, and point to the era’s irony and humor as dominating artistic devices. 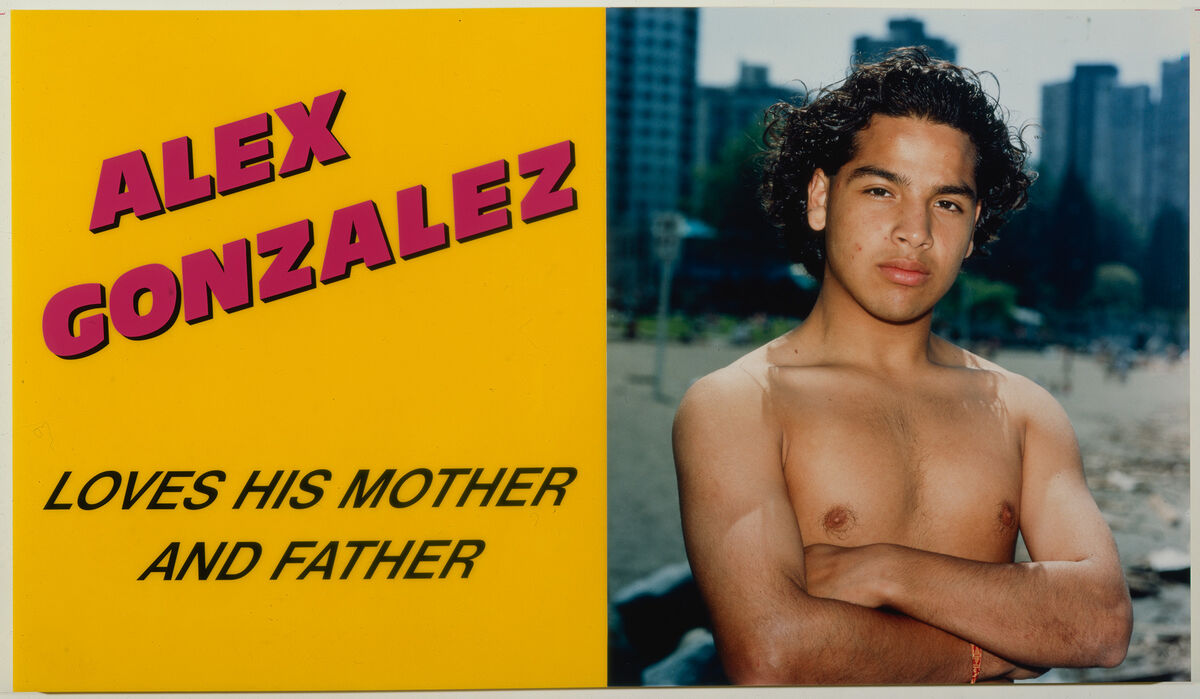 Ken Lum, Alex Gonzalez Loves his Mother and Father, 1989. Photo by Witte de with Center for Contemporary Art, Rotterdam. Courtesy of the artist.

Besides the self-reflexive gestures by McCollum, which were aimed at art itself, artists started to seriously engage with the nauseating spiral of mass spectacle, and the ways that visual culture started to inscribe identity and the body as political and economic ontologies.
Ken Lum
’s Alex Gonzalez Loves his Mother and Father (1989), cheeky but sweet, generically graphic but radiant, communicates a complex dynamic: There are more signs and symbols in society than ever before, but meaning is only getting harder to grasp. Then there is
Tishan Hsu
’s Biocube (1988), a modular, flesh-colored domestic apparatus with odd, orifice-like protrusions, titillating in how it collapses what constitutes a body versus an object.
Though the ’80s started with an exhilarating economic recovery from the 1970s, the structural wealth (and health) disparity would soon become clear, and eventually the system would enter a tailspin: Black Monday, the global stock market crash. And of course, the AIDS crisis took the lives of thousands—including many in New York’s LES scene—driving artists to respond. ACT UP’s iconic neon signage SILENCE = DEATH (1987) and
Gretchen Bender
’s confrontational video work Untitled (People with AIDS) (1986) are two examples of the politicized art of the era included in the Hirshhorn’s exhibition. 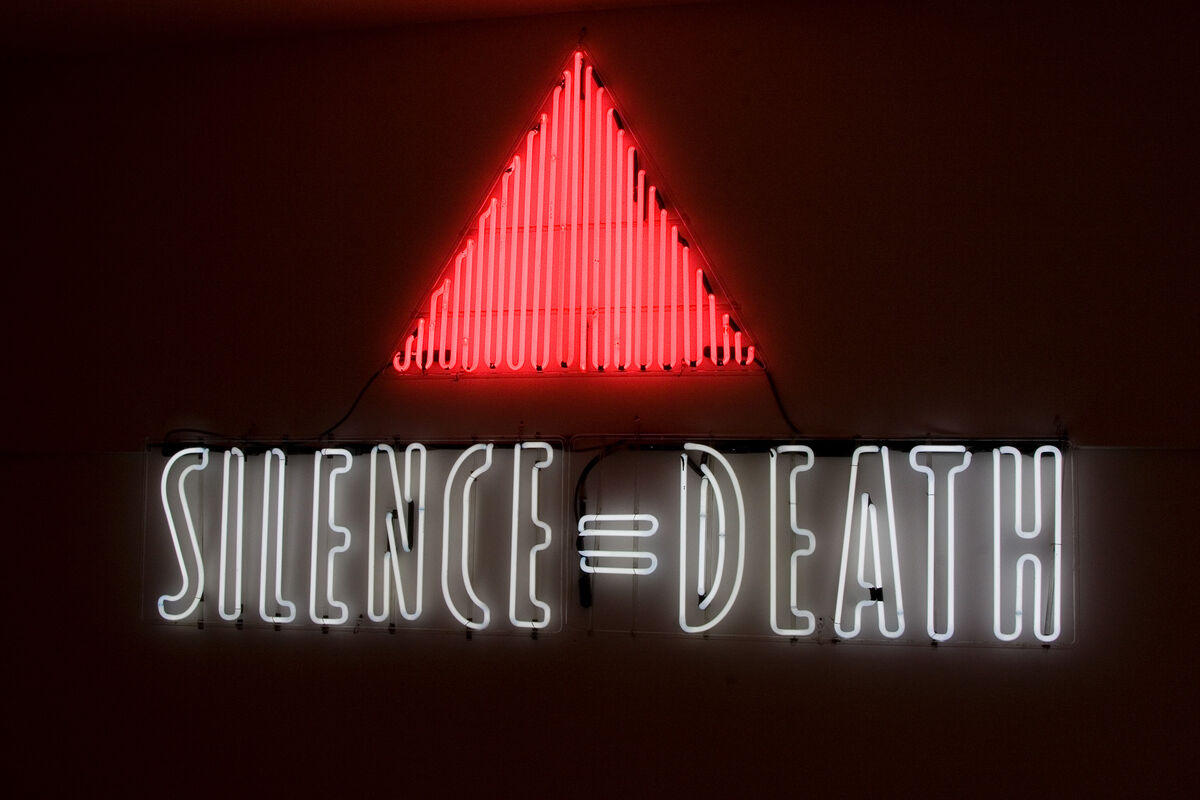 For many reasons, the decade is critical to an understanding of our contemporary moment. These were the years when the art market became what it is today: a luxury exchange, but also a functioning economy for midmarket artists and professionals. The differences between pop and underground culture, between high and low brow, became more obscured than ever before, causing not only confusion, but also a hearth for new creative practices. Nascent digital technologies were replacing the industrial order, and critical theory was demolishing the traditional conceptual boundaries between disciplines.
In her video work Martha Rosler Reads “Vogue” (1982), also on view at the Hirshhorn,
Rosler
flips through the magazine and asks, “What is Vogue? What is fashion?” She responds with a flurry of responses to herself, a deconstruction not only of the magazine, but of culture and those who inhabit it: “It is glamour. It is excitement, romance, drama, wishing, dreaming, winning, success…” Rosler’s monologue handily represents both the naive optimism of the 1980s, and also those voices, tinged with irony, who responded in kind.
Rob Goyanes
Related Stories

5 Artists on Our Radar This June
Artsy Curatorial and Artsy Editorial
Jun 1, 2020