At this point, we can all agree that Los Angeles is pretty lucky for being able to see
James Turrell
’s work on a regular basis. During LACMA’s 2013–14 retrospective—which pretty much everyone in the city saw—Kayne Griffin Corcoran held a concurrent exhibition based around Turrell’s as-yet-unfinished Roden Crater in Flagstaff, Arizona, where the artist lives. (The show was also notable for the fact that the gallery quietly exhibited one of Turrell’s “Perceptual Cells,” accessible to those who didn’t want to be placed on a several-month-long wait list at LACMA.) Now, Kayne Griffin Corcoran—which also houses a Skyspace on site and a lighting program designed by the artist—has mounted a new eponymous Turrell exhibition, his fifth with the gallery over the past decade. Over a 49-year career, the 72-year-old Pasadena-born artist has made some of the most intriguing and innovative explorations into perception and light-based phenomenology that exist. For the most part, Turrell’s new show furthers his ongoing fascination with ellipses and resurfaces the centerpiece his 2013 show at the Guggenheim in New York, Aten Reign (2013). “The elliptical shape is one that appears often in Turrell's work” gallery director Genevieve Day told Artsy, noting Aten Reign, in addition to Roden Crater and his Skyspaces as examples, in addition to the “Elliptical Wide Glass” works in this show. “He likes to say that ‘Nature loves the ellipse.’ The shape also is reflected in the way we see and the shape of our eye,” she added. Advertisement
Photographic prints of various processes depict images taken of Aten Reign (2013), a giant elliptical light space that transformed the museum’s iconic rotunda and bathed it in LED glows. The inkjet prints are sets of three images, which were taken during successive moments when the LED colors changed. The show also includes one-off woodcuts and an aquatint. 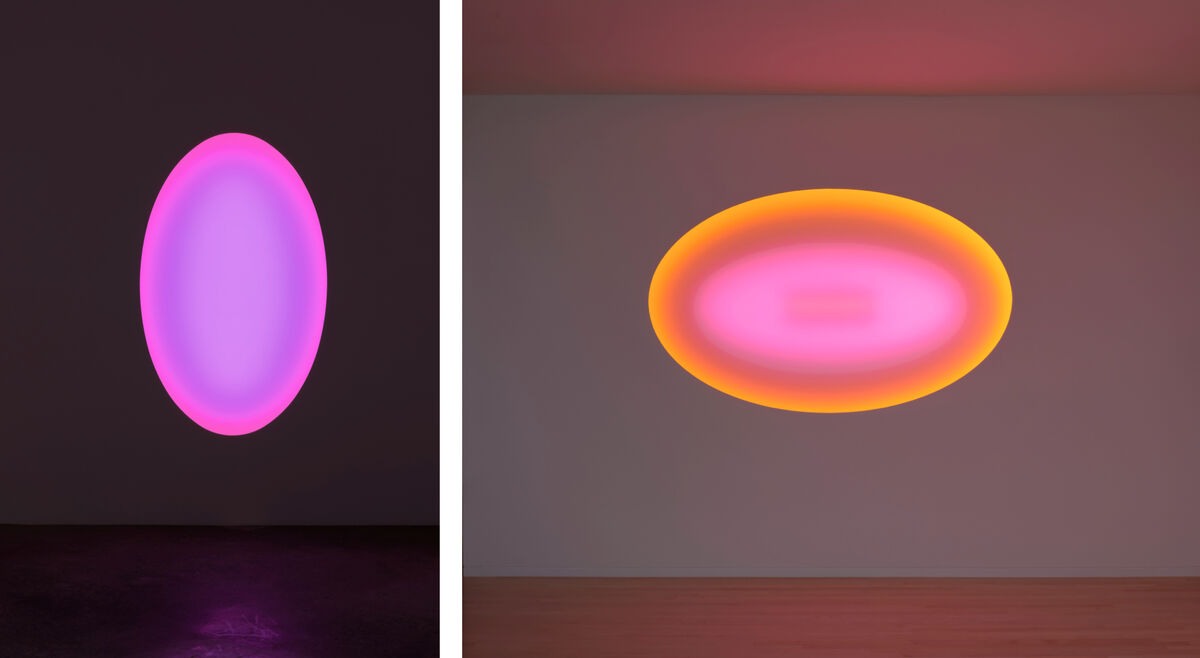 The show’s highlights are three works from Turrell’s “Elliptical Wide Glass” series. The works, shallow holes in the wall filled with LED lights that seamlessly change colors, are classic Turrell. “Each is a unique composition, which over a two-and-a-half hour time period sweeps through thousands of different color themes,” Day noted. “The titles of the ‘Elliptical Glass’ works from 2015 refer to capes in the Southern hemisphere where Turrell spent much of his time in the past year,” Day explained. The two horizontal pieces are dubbed Cape Hope (S. Africa) (2015) and Stewart Island (New Zealand) (2015), and the vertical one is Cockle Creek (Tasmania) (2015). “Each cape has a distinct personality that he was considering when creating these works.”
It’s a seemingly simple setup, but the works are magnetic, recalling the film that is impossible to look away from described in David Foster Wallace’s Infinite Jest. In one, the colors slowly swing from bright white to seafoam green to aquatic blue like a chameleon in the ocean. There’s a peacefulness to the work that allows the viewer to chill out and feel at ease—a pretty L.A. thing to do.