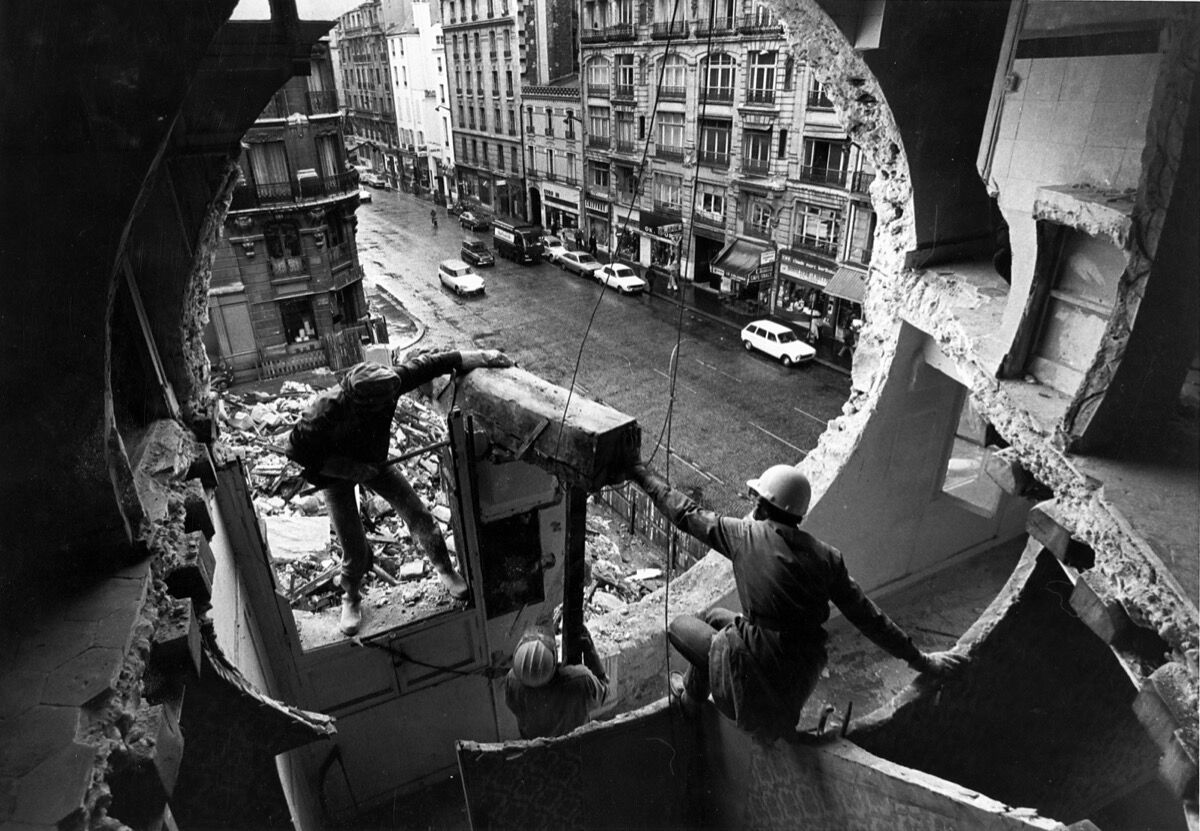 In the cash-strapped New York City of the late 1960s and early ’70s, piles of uncollected garbage consumed sidewalks, abandoned buildings turned neighborhoods into ghost towns, and the homeless population seeped far beyond the Bowery. This civic squalor was too much for the late
Gordon Matta-Clark
to ignore when he returned to his native New York from Cornell University in 1969 with a degree in architecture. But he was less interested in reimagining the city’s buildings than exploring its gritty underbelly and engaging the people and places that modernism had failed.
For one of his earliest projects, Garbage Wall (1970), Matta-Clark invited passers-by to help him gather trash from the streets and assemble it into a rectangular slab as a kind of DIY prototype intended to be an affordable, makeshift shelter for the homeless. Undoubtedly informed by the work of artists
Robert Smithson
and
Dennis Oppenheim
—whom Matta-Clark assisted in 1969 at Cornell while the former were making work for the landmark “Earth Art” exhibition—Garbage Wall was first erected in 1970 near St. Mark’s Church in the East Village, and then again, the following year, under the Brooklyn Bridge. (He also roasted a pig there for the public to enjoy, a precursor to Food (1971–74), the experimental artist-run restaurant he would later co-found in pre-gentrified SoHo.) 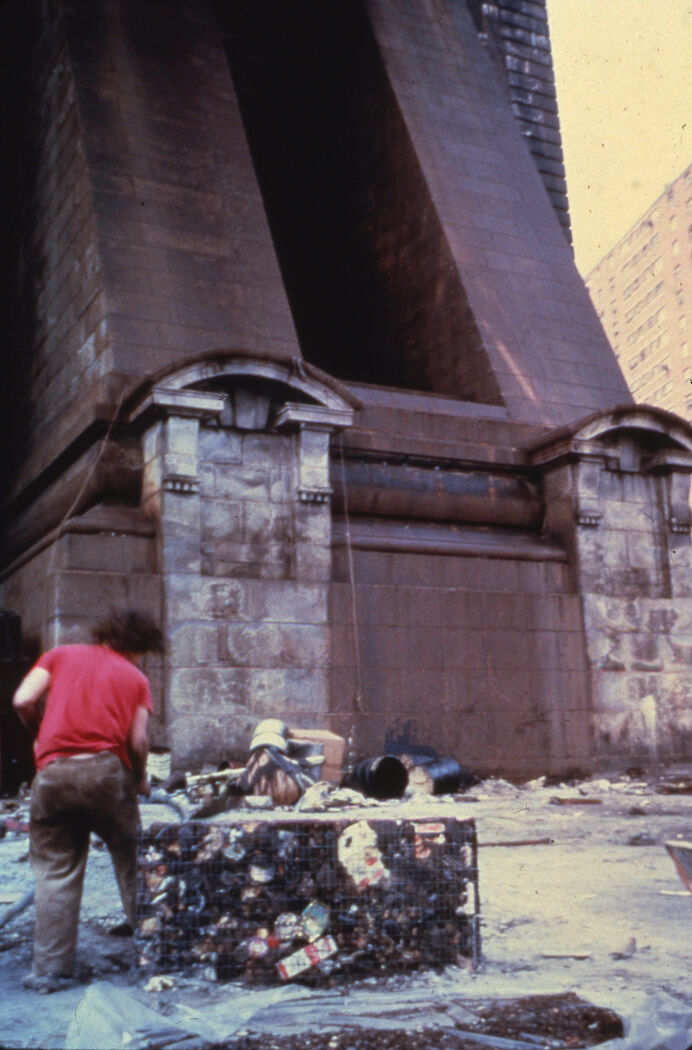 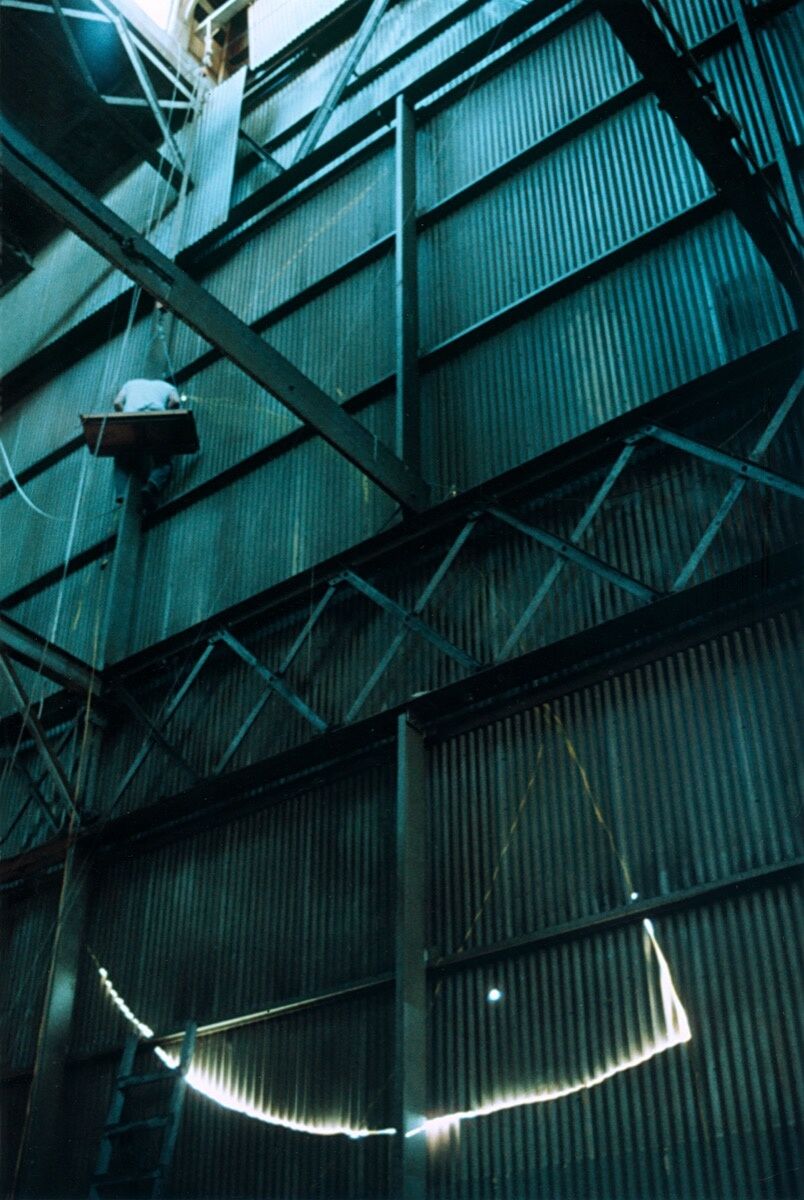 “People called him an urban alchemist,” says Jessamyn Fiore, independent curator and co-director of the Gordon Matta-Clark Estate, and the co-organizer, with curator Antonio Sergio Bessa, of “Gordon Matta-Clark: Anarchitect,” which opens at the Bronx Museum of the Arts next week. A new iteration of Garbage Wall, created with 21st-century trash and the help of local teens, stands on the museum’s terrace as a reminder of Matta-Clark’s idealism and drive to be constructive. Those qualities sometimes get lost in the shadow of his best-known “building cuts,” openings that he sawed and blowtorched into floors, ceilings, walls, and façades of derelict buildings.
“People sometimes associate him with destruction, but that’s not what any of this was about—it was about transformation and evolution,” says Fiore. “He was idealistic, but I also think his work came out of a genuine frustration with what was happening in the world at the time, on the city level, politically, with the Vietnam War and its aftermath. Art for art’s sake wasn’t enough anymore. Art had to address the reality and to try to create some kind of positive change.”
The son of the Chilean
Surrealist
painter
Roberto Matta
and American artist Anne Clark, Matta-Clark is known as a maverick of ’70s New York, not only for his inventive, hands-on engagement with the city, but for the diversity of his work: He was a sculptor, draughtsman, photographer, filmmaker, performance artist, writer, conceptual artist, chef, and activist. (He is also known for having died far too young, at the age of 35, in 1978, from pancreatic cancer.) The term “anarchitecture” is a funny conflation of anarchist and architecture, as well as the name of a casual discussion group that Matta-Clark and his artist friends founded at 112 Greene Street, a raw, artist-run space in SoHo that displayed experimental work. 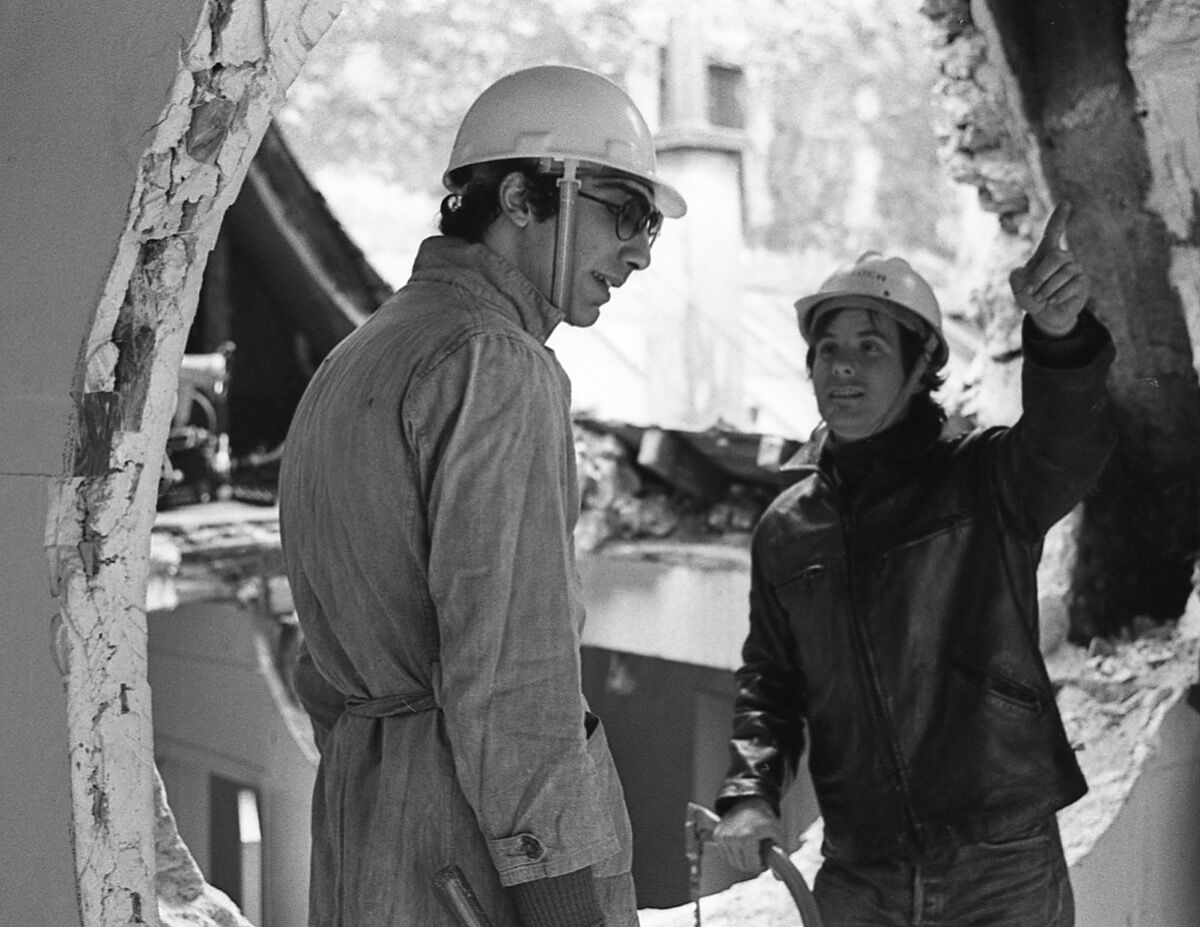 Advertisement
At the core of his practice was the merging of art and life—a parallel sometimes drawn to the “social sculpture” of German artist
Joseph Beuys
. “I have chosen not isolation from the social conditions, but to deal directly with social conditions whether by physical implication, as in most of my building works, or through more direct community involvement,” Matta-Clark once wrote.
For the Bronx Museum’s exhibition—the most significant showcase of the artist’s work in New York since his Whitney retrospective 10 years ago—Fiore and her mother, Jane Crawford, who is Matta-Clark’s widow, have overseen the remastering of five of his films, originally shot with Super 8. Fire Child (1971) shows him building Garbage Wall under the Brooklyn Bridge, while in Substrait (Underground Dailies) (1976), he leads viewers through tunnels and other underground spaces in the city. Day’s End (1975) documents one of his best-known series of “cuts,” which he made in a decrepit warehouse in the Meatpacking District on Pier 52. At the time, it was a gay enclave and an abject haven for prostitution and drugs.
“These old manufacturing and shipping spaces had become obsolete and quite dangerous,” says Fiore. “A section of the elevated West Side Highway had collapsed there the year before, and it was really dilapidated.” Recognizing that New Yorkers lived on an island, yet didn’t really have access to the water, she says, Matta-Clark had the idea of transforming the warehouse into what would be “a post-industrial park, a light and water temple.” (The Whitney recently announced plans for
David Hammons
to create a permanent, ghostly homage to the Pier 52 building, exactly where it stood, on the waterfront across from the museum’s current site.) 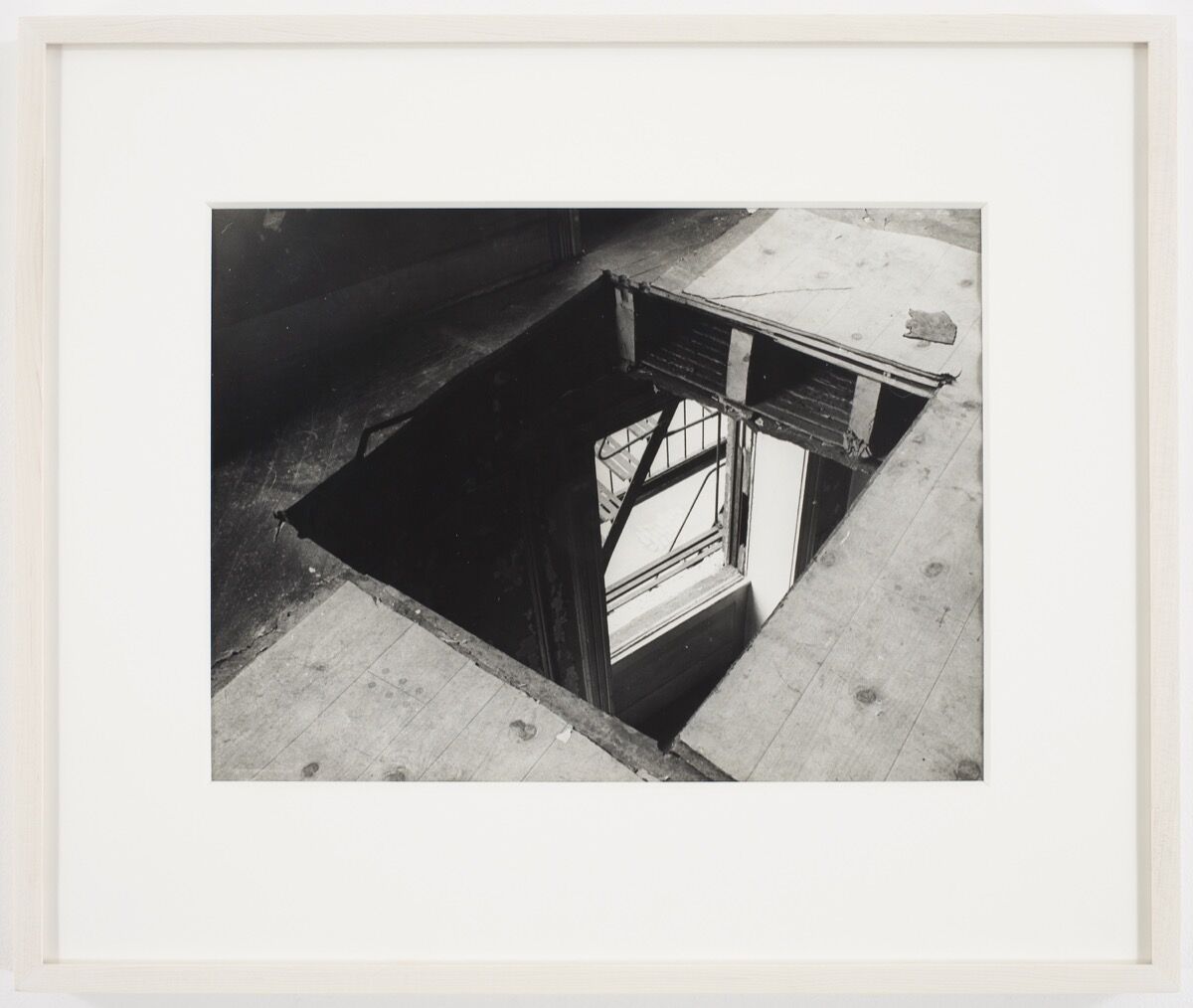 Gordon Matta-Clark, Bronx Floors, 1973. Courtesy of The Bronx Museum of the Arts. 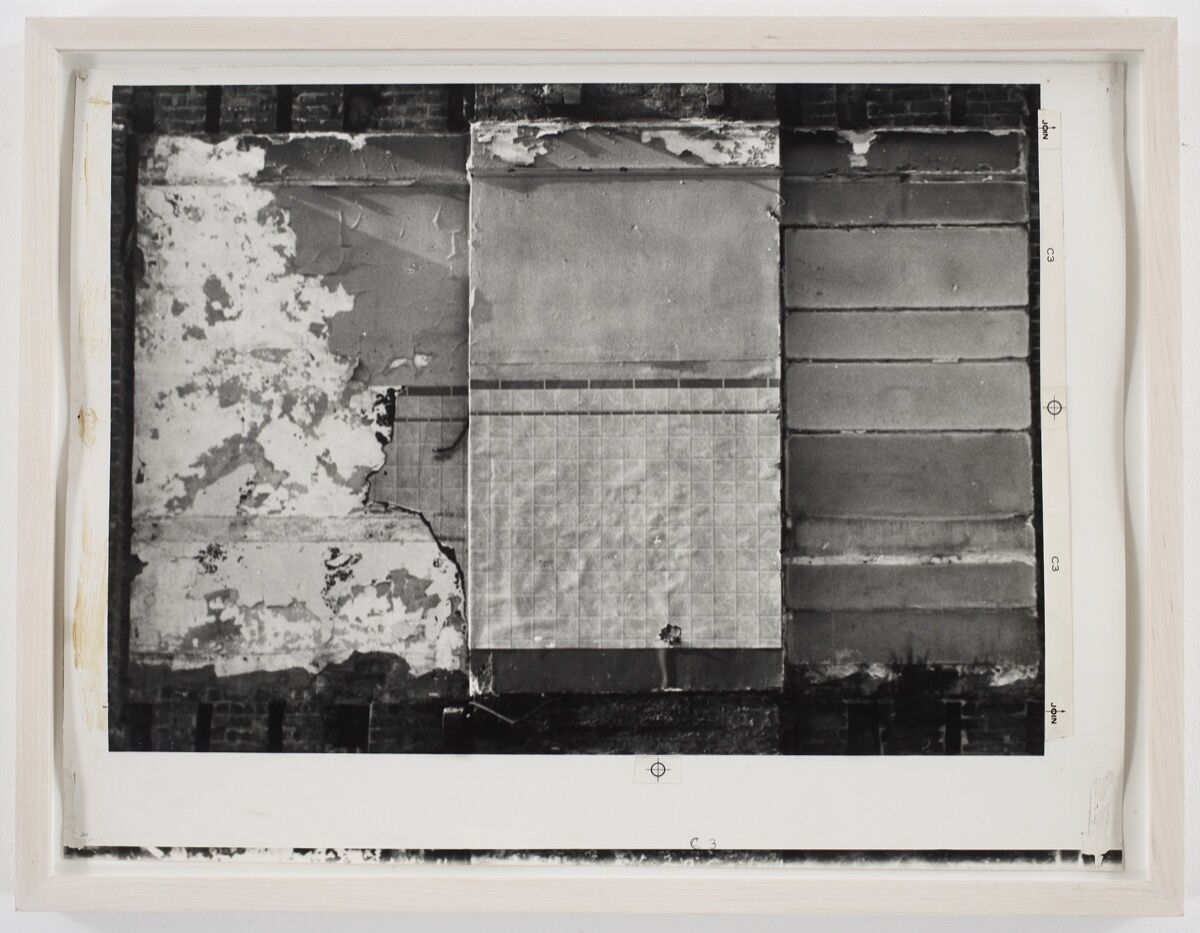 Gordon Matta-Clark, Walls, 1972. Courtesy of The Bronx Museum of the Arts.

The perils of the West Side pier were likely tame compared with those of the South Bronx, an area that Matta-Clark also adopted early in his career, undeterred by threats of gang violence, hostile squatters, and arson. By the early 1970s, following the exodus of manufacturing jobs and working- and middle-class families to the suburbs, the South Bronx was wracked by bureaucratic and landlord neglect. Scores of apartments sat decaying or vacant, while whole blocks were stripped of wiring and other materials and then burned to the ground for insurance money.
It was here that Matta-Clark took his saw to a neglected building for the first time. His “Bronx Floors” (1972–73) were hunks of linoleum, plaster, and wood that he’d throw in his truck and haul back to 112 Greene Street to exhibit as sculpture. These weren’t just industrial
Minimalist
finds, but tactile evidence of blighted urban communities. As the artist
Dan Graham
has written, “Matta-Clark saw his ‘cuts’ as probes…opening up socially hidden information beneath the surface.”
An avid self-taught photographer, Matta-Clark photographed (or filmed) almost every one of his urban explorations. (According to Fiore, he had a sixth sense for knowing exactly when his good friend
Robert Rauschenberg
acquired a new camera that he could ask to borrow.) In the Bronx, it was the graffiti that captured his attention. He shot dozens of black-and-white photos of tagged walls and subway cars, often hand-coloring the graffiti with spray dye and assembling the prints into long scrolls to mimic the surfaces of train cars. The museum is devoting a whole gallery to the photos.
“There is something very painterly about his work,” says co-curator Bessa. “He was very brainy and conceptual, but he also had an eye for beauty in these really kind of derelict things.” 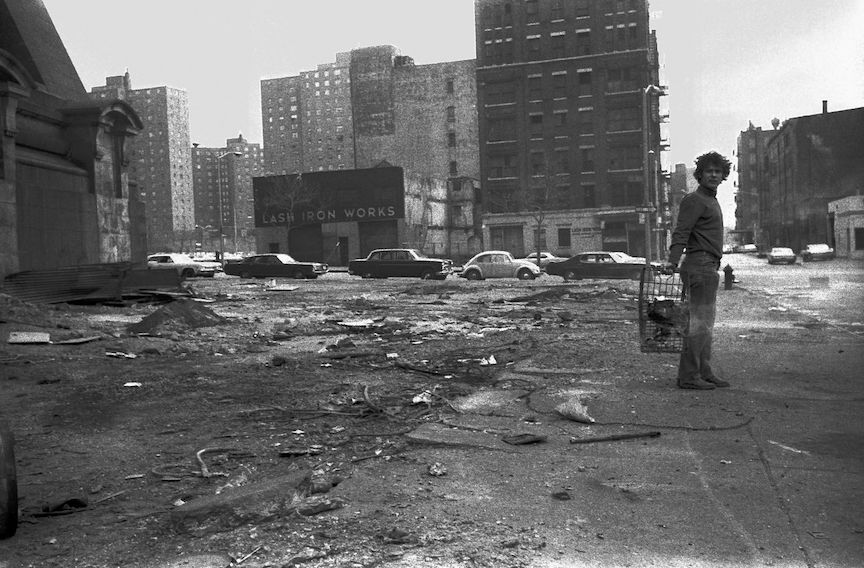 The walls of low-income apartments were among those derelict things. In 1972, for his work Walls Paper, the artist spent several months shooting such walls in the South Bronx and Lower East Side. After printing the color images on newspaper, he then assembled them in a book or hung them on the wall like swaths of detached wallpaper. The fragility and impermanence of the newsprint was not by chance; the work remains one of his most powerful, a subtle homage to structures that are long gone, not unlike his ephemeral building cuts.
“Sometimes people ask how you can do a show because none of the work exists anymore, but that’s just not true,” says Fiore. “There is amazing work far beyond the physical structure. He didn’t just do these things or find these things and click a few shots. He wasn’t just documenting. Everything had multiple layers.”
Meredith Mendelsohn
Related Stories