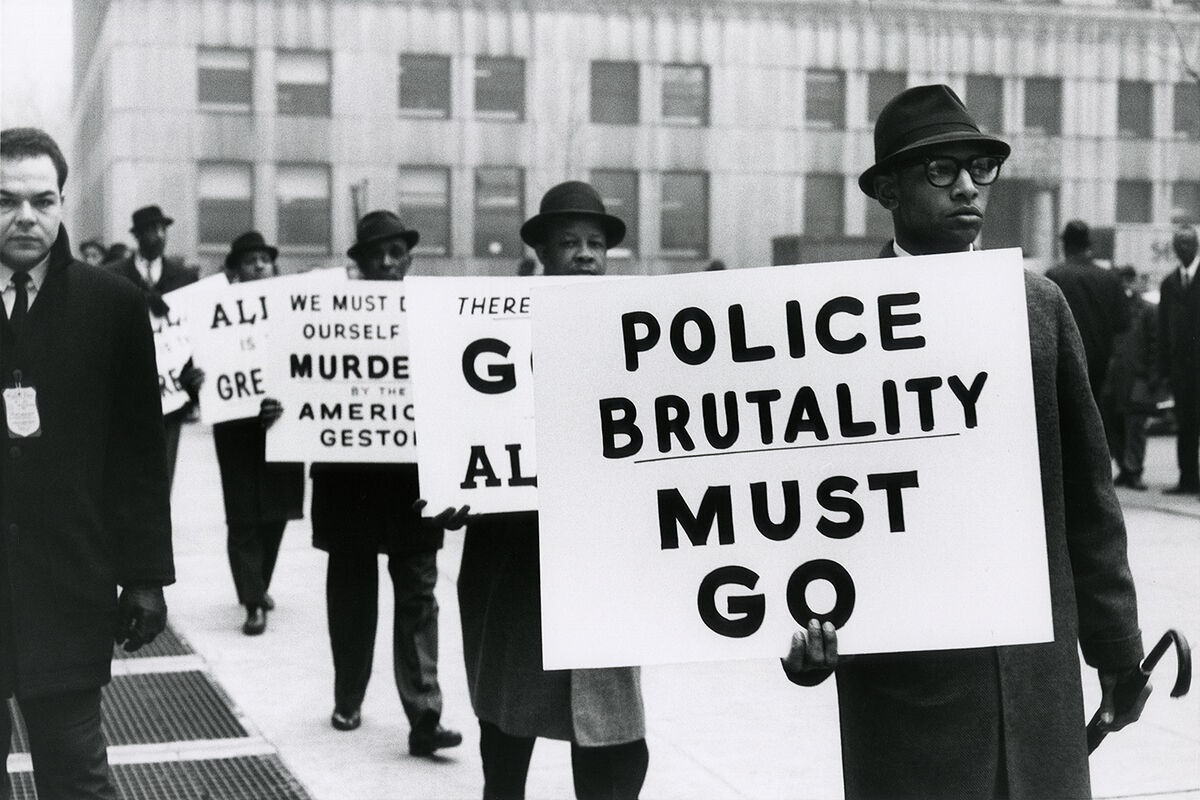 Across the United States, protests have broken out in response to the death of George Floyd in Minneapolis Police Department custody on May 25th. The very next day, people took to the streets of Minneapolis to denounce police brutality and yet another killing of an unarmed Black man by the police. Within days, there were protests organized in all 50 states and around the world. The amount of people who are speaking out against racial violence feels encouraging in some ways. However, this is far from the first time we’ve come together in protest over an almost identical scenario.
Soon after the protests began, images started circulating online to document what was happening across the country, and I was immediately struck by how familiar they felt. Photographs of protests during the American civil rights movement in the 1960s, and more recently during the Black Lives Matter movement, illuminate a long history of Black people’s fight against racism. The Gordon Parks Foundation—which was founded in 2006 by
Gordon Parks
and Philip B. Kunhardt Jr. to preserve the artist’s work and support socially engaged artists—began posting images to Instagram shot by Parks during the 1960s. Masterful in composition and highlighting Parks’s signature style, these photographs from over five decades ago reflect the hundreds of protests happening right now. 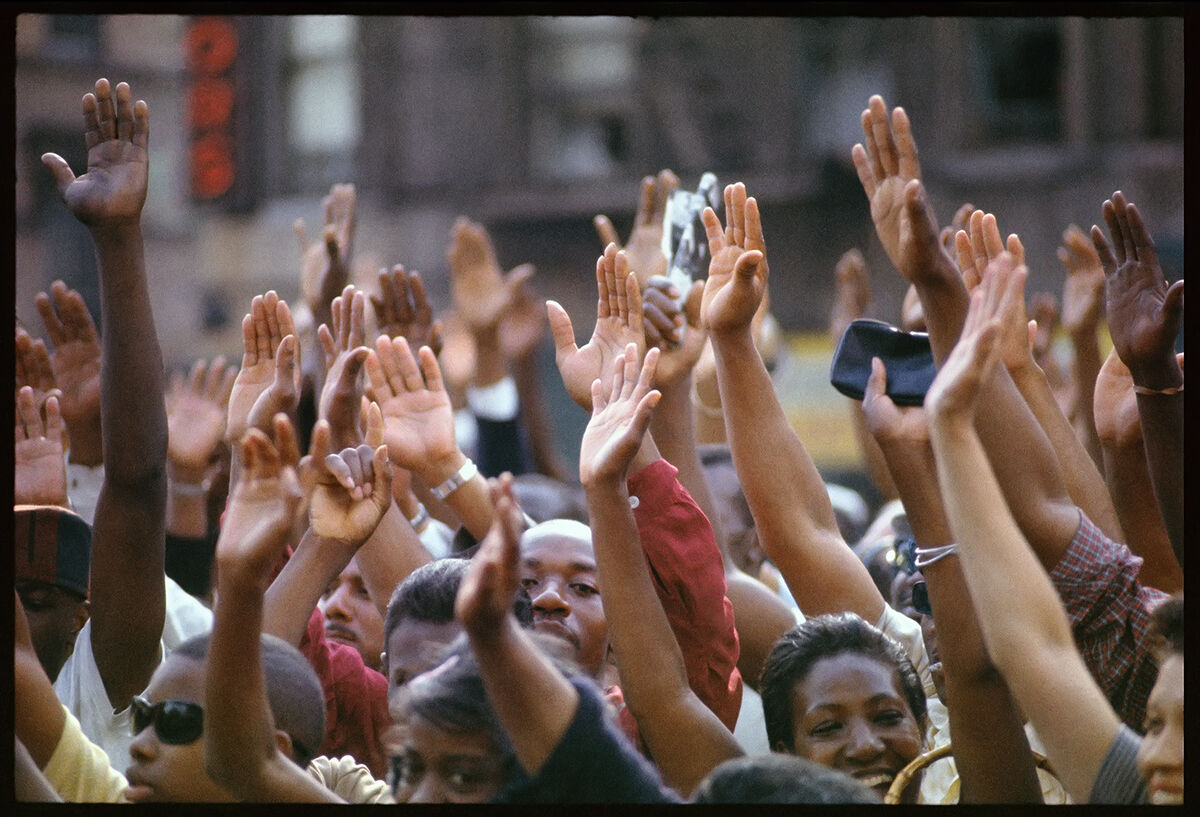 Many of the images come from Parks’s 1963 series “Black Muslims,” which he was commissioned to photograph by Life magazine (he worked there from 1948 to 1972). Parks was asked to cover the Black Muslim movement, including leaders like Malcolm X and Elijah Muhammad, after several white colleagues were turned away in their quest to gain access.
One untitled 1963 image shows a Black man in Harlem holding a sign of protest, wearing a somber expression. The message on his sign, in bold black lettering, reads: “We are living in a police state.” Another depicts a small group standing at a protest in California in 1967 wearing Malcolm X sweatshirts. A young woman in the foreground has her head thrown back, as she shouts with pride and joy. The photographs feel retro yet contemporary, all at once.
I recently spoke with photography historian Dr. Deborah Willis, who sits on the Gordon Parks Foundation’s board of directors, about the resonance of Parks’s images, and what they might reveal about the history of our nation. Currently a professor and chair of the department of photography and imaging at New York University’s Tisch School of the Arts, Dr. Willis has revolutionized the scholarship around Black photography. She spoke to the disheartening reality of these patterns, but also to the transformative power of protest images. 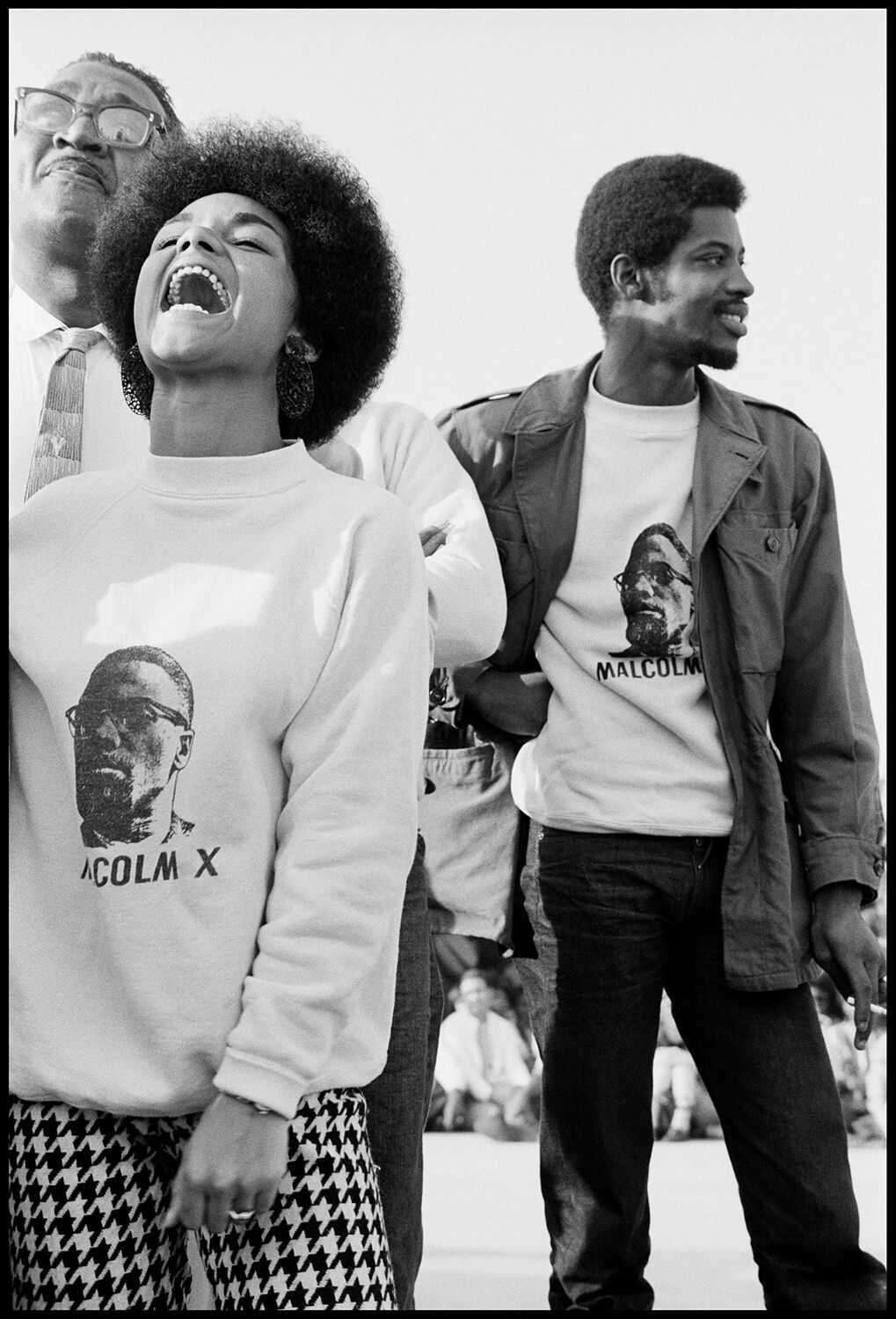 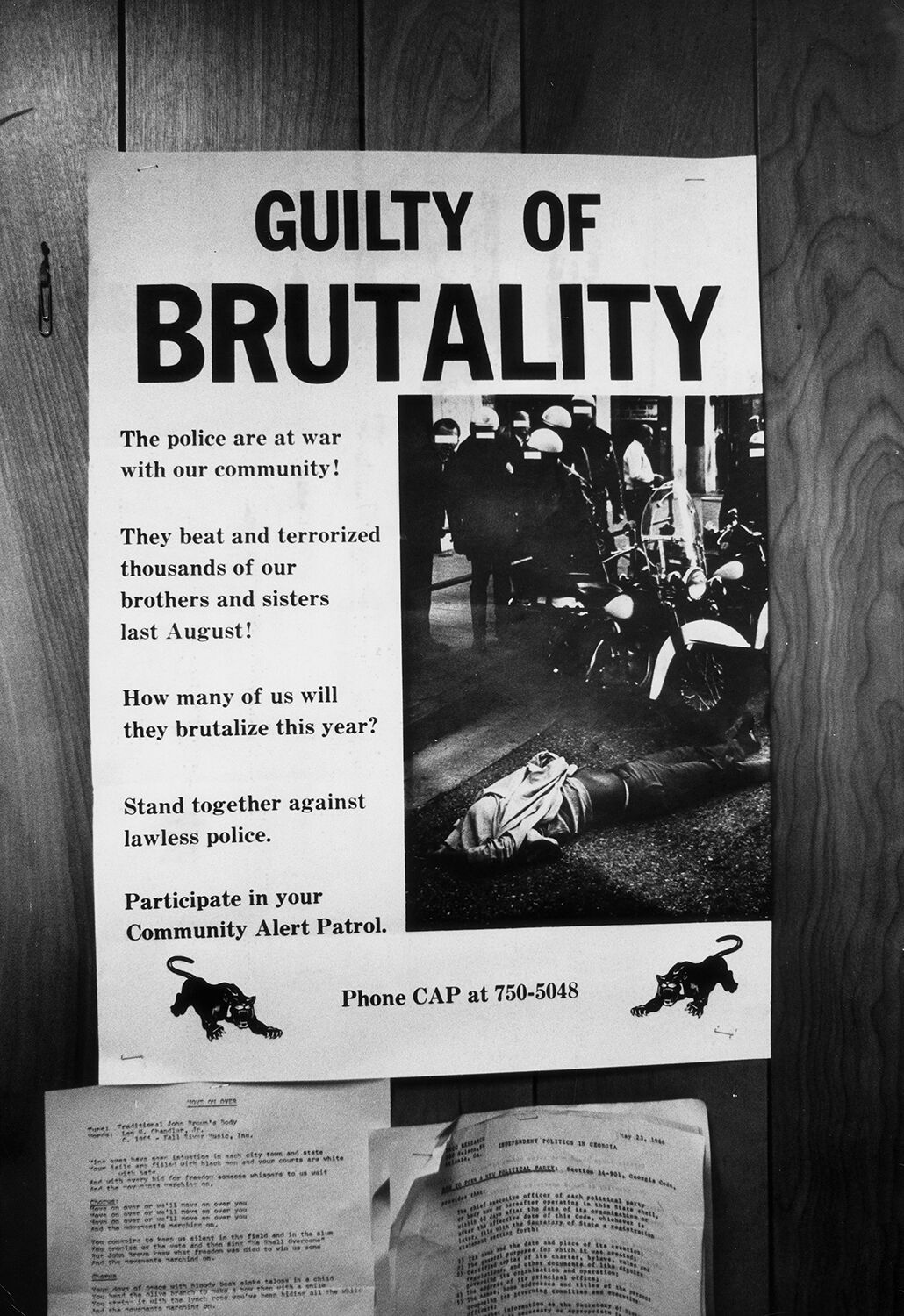 Advertisement
“I am troubled by the photographs I’ve seen this week,” Dr. Willis said. “The Gordon Parks Foundation Instagram share is significant, as they show how the protests are mirroring the past and nothing has changed.”
Photographers play a crucial role in advocating for tangible change in our society. Dr. Willis believes that these images have the ability to shift the way people see what’s around them. “By documenting social and political protesters globally,” she said, “photographers are documenting what is happening in order to mobilize the communities and civic leaders.”
Dr. Willis reflected on the way that graphic images highlighting racial violence impacted her as a young child. “I will never forget the photograph of young Emmett Till’s brutally beaten and swollen body in Jet magazine in 1955,” she said. She was only seven years old when she stared upon an image showing the gruesome death of the young Black boy. Today, videos and images of Black death flash across our social media feeds with such regularity that many have become numb. We must not allow this horrific truth to desensitize us. As Dr. Willis emphasized, “We cannot erase the past week from our memory and going back to the archive of protest images we see why—we must do something.” 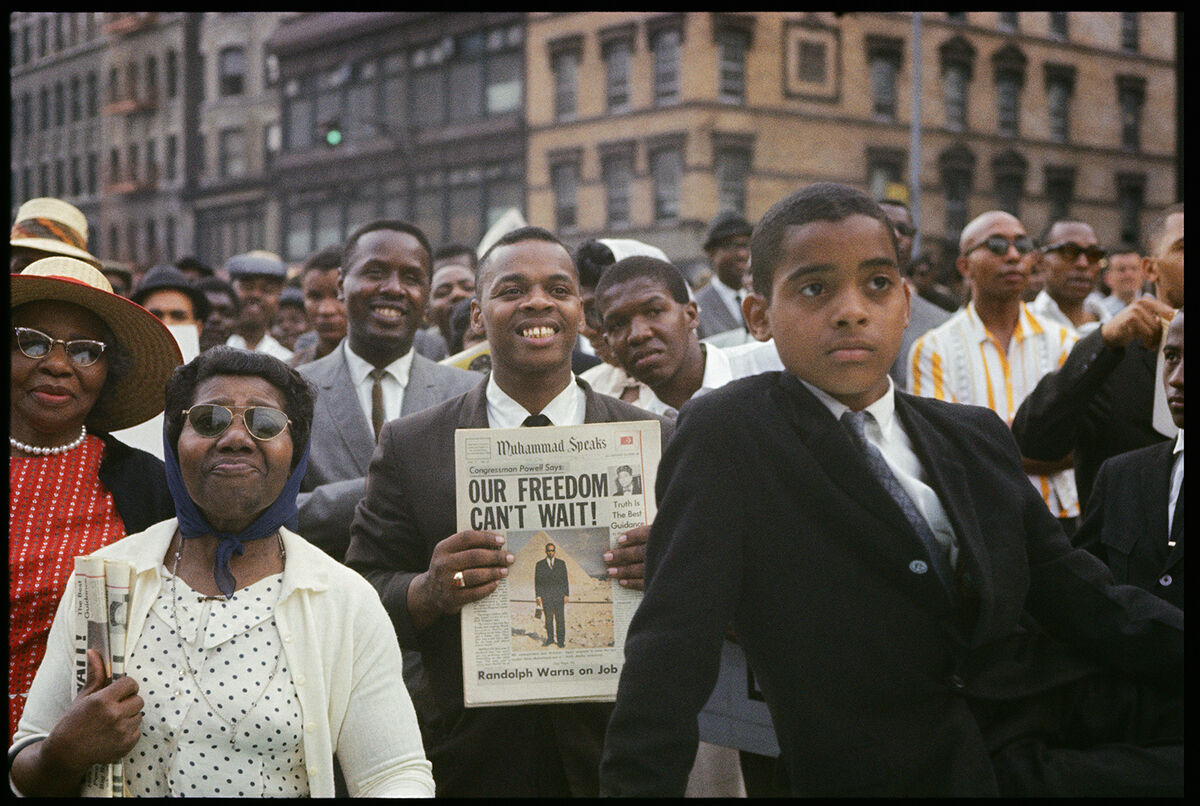 While many Americans are coming face-to-face with the rampant racism that defines this country for the first time, this is the everyday reality of Black people in the United States. We do not have the luxury of tuning out, of opting in, or fighting for human rights and racial equity when we feel like it. We know that our freedom cannot wait.
There is a promising future ahead of us. Dr. Willis said that she’s looking to the work of her “amazing undergraduate [students]” who live across the United States. “They are all finding a way to find words to reflect the injustices through their camera lens,” she added.
We must ask ourselves: How long we are willing to wait? We cannot wait for the next life lost, for the next moment, or the next profound imagery to move us once again. As Gordon Parks once said, “What the camera had to do was expose the evils of racism, the evils of poverty, the discrimination and the bigotry, by showing the people who suffered most under it.” The time to act is now.
Daria Harper
Related Stories