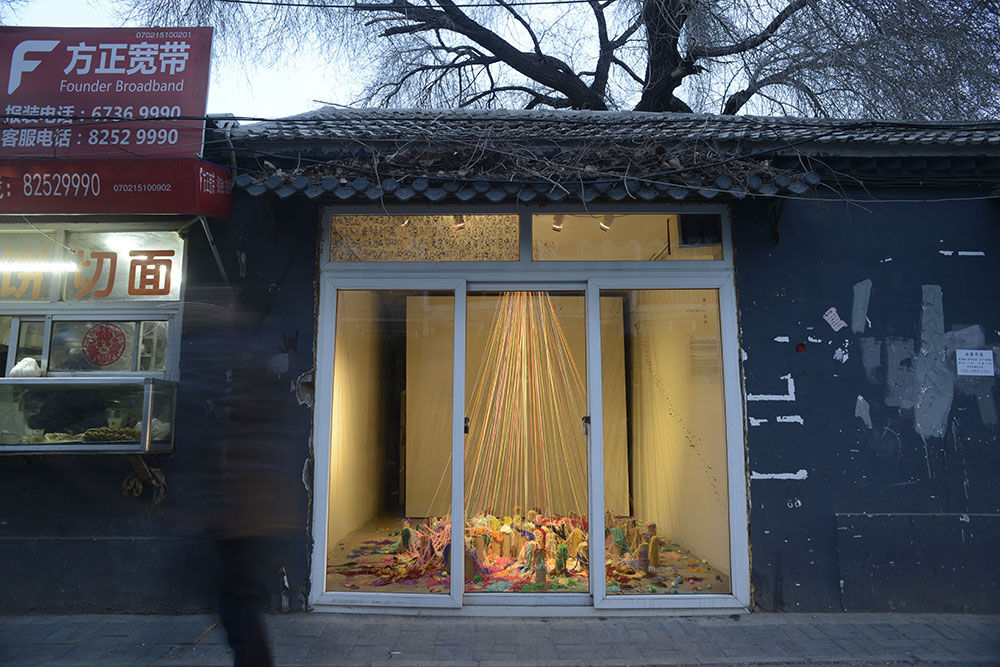 Arrow Factory is a one-room exhibition space in the middle of Beijing’s inner-city hutong alleyways—a warren of narrow, residential lanes initially built into the capital during the Yuan Dynasty and traditionally inhabited by court elite until the fall of the Qing in 1912. The fact that the gallery has survived to celebrate its 10th anniversary this past month is both miraculous and extremely lucky. Last June, rumors started traveling down Jianchang Hutong—the narrow lane that gives the space its name—that municipal work crews would be coming soon to brick up all street-facing doors and windows. Nearby alleys like the bar-studded Fangjia Hutong had already been claimed by this process, and lay clogged with bricks and piles of ripped-out façades for most of the summer.
The bricking crews were part of a citywide program of renovations ostensibly intended to clean up Beijing’s famously gritty hutong neighborhoods, rendering all of the alley walls a pallid, uniform gray. Though the primary target of this bricking operation was what Beijing officials bluntly called the city’s “low-end population”—migrant workers and the unlicensed hutong shops and restaurants catering to them—vendors on Jianchang Hutong selling everything from local produce to craft beer were also affected, as was Arrow Factory, which operates with a business license, though it’s never sold a thing.
Arrow Factory is a non-commercial exhibition space co-founded by San Francisco transplant
Rania Ho
, her husband
Wang Wei
(an installation artist she met while studying at Beijing’s prestigious Central Academy of Fine Arts), and curator Pauline J. Yao. Until last summer, the space consisted of nothing more than a room fronted by a floor-to-ceiling glass window and door. A different artist would come in every few months and create an installation facing the street, then the door would be locked and the show would be open. 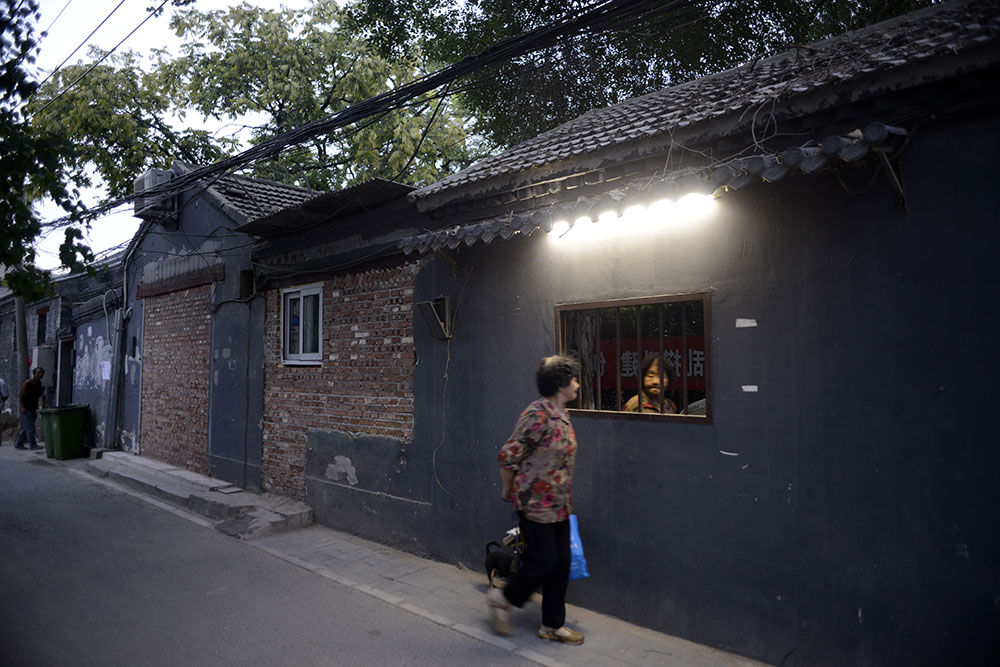 By a strange twist of fate, Wang and Ho had already been talking with Shanghai-based artist
Yang Zhenzhong
for almost a year about a piece the latter wanted to do at Arrow Factory. It would involve replacing the glass façade with a “stark wall” and a small, barred window fitted with a two-way mirror. Though they hadn’t scheduled anything, when word of the coming bricks started to bounce around Jianchang, Yang got a call, and by June 15th, the Arrow Factory team had done the manual work of walling up its façade all on their own.
“When we were doing the installation, our neighbors thought, ‘Oh my god, it’s starting,’” recalls Ho. When the official bricking crew actually did arrive in August, Arrow Factory got a pass (“They figured we did it ourselves,” Ho says), though Wujin, a café and community space a few storefronts north that’s also co-run by Ho and Wang, lost its only entrance, and subsequently closed.
Wujin’s forced closure left Ho deeply disheartened—she and Wang, who live in an apartment nearby, actually considered leaving Beijing. “I was so depressed about the whole thing that I said, ‘We can go anywhere. We don’t have to be in Beijing, there’s no reason,’” she remembers. Through their personal networks and Arrow Factory’s long list of exhibitors, Ho and Wang have strong connections to lesser-known contemporary art hubs across China, such as Dongguan on the southern coast near Hong Kong, where artist
Li Jinghu
has recently launched a residency program aiming to create a dynamic local art community.
“I personally think that there are more possibilities in the fringe—that’s where I’m used to working,” says Ho. “There’s more intersection and overlap and weird crossover that actually can happen. There’s all this funky stuff going on in Guangzhou, all these artists that have no resources, but they make really cool stuff anyway. It’s happening everywhere [in China] in a much more interesting way than 10 years ago.”
Despite these hurdles, Arrow Factory and Wujin persist in Beijing for the time being, though their histories on the margin are worth examining. 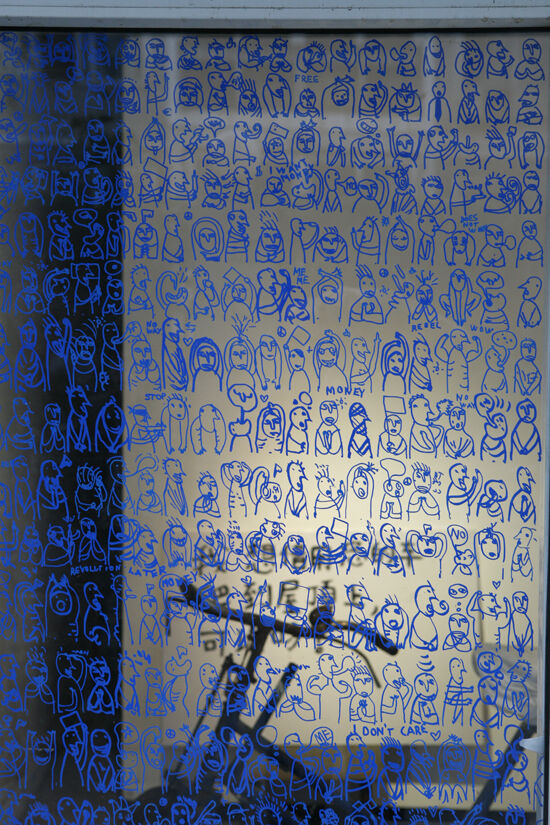 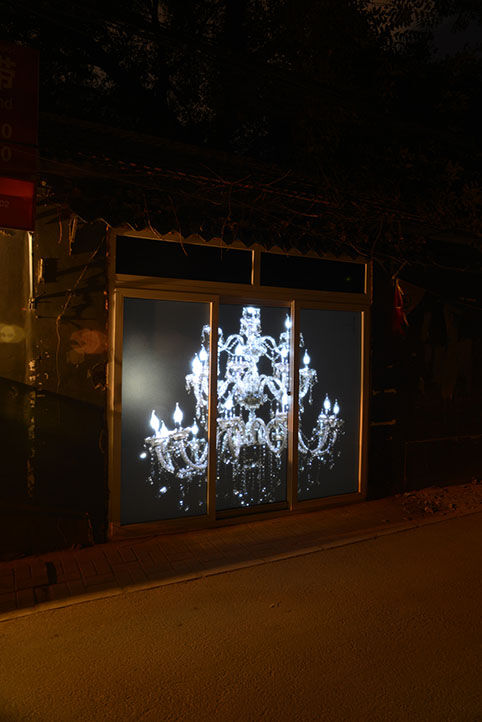 Advertisement
Arrow Factory itself was very much on the fringe when it opened. At the time, there wasn’t much to Beijing’s contemporary art scene besides 798 Art District, where the city’s largest contemporary art museum, UCCA, had opened a year before; and the nearby Caochangdi neighborhood, where many artists lived and exhibited in galleries like the
Ai Weiwei
-designed Three Shadows, which also opened in 2007. There was little beyond residences, grocers, and dusty tourist attractions such as the ancient Imperial Academy in the hutong near Arrow Factory, when it opened its inaugural exhibition, “Slice,” on April 30, 2008.
That situation has changed, in large part due to Arrow Factory’s pioneering example. There are now at least a dozen galleries, project spaces, and residencies in Beijing’s hutong neighborhoods, largely driven by a younger generation of artists, curators, and critics working upstream from the more established commercial art galleries in 798. Arrow Factory and its founders played a seminal role in inspiring some of these newer spaces, such as the curatorial studio Salt Projects, which was co-founded by 29-year-old writer and curator Yuan Fuca in 2016. “I feel it’s an opportunity for two generations to meet, especially as Beijing starts to rethink and reclaim its role in contemporary art,” says Yuan, who has also hosted a few salons at Wujin. “I’ve found it very precious to learn from Rania and Wang Wei, as a person from the younger generation.”
“The ecosystem has shifted in a very healthy way,” says Ho of the latest crop of artists and curators in the hutong. “So, great. We don’t necessarily need to still keep going.” 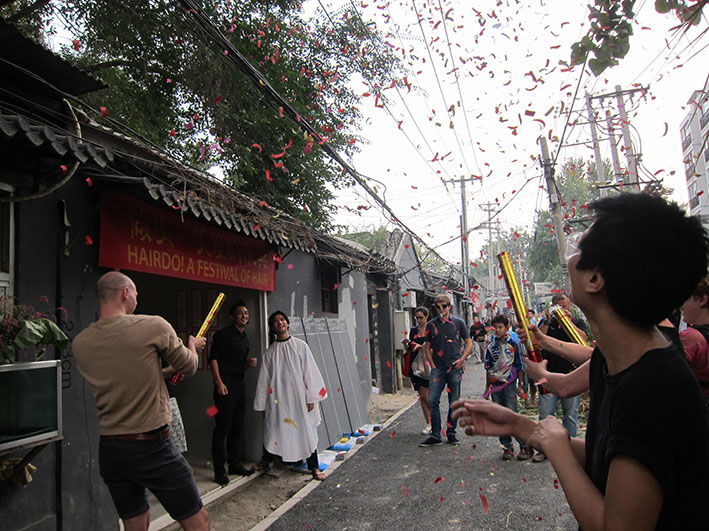 But they’re hanging on nonetheless. For Arrow Factory’s current installation, China Academy of Art graduate and lecturer
Zhang Liaoyuan
mounted its old façade onto the ceiling of the exhibition room, which the viewer can see by stepping close to the small glass window—initially installed and fitted with reflective glass by Yang’s 2017 piece—that remains as Arrow Factory’s connection to its audience. Ho and Wang both feel that, despite the circumstances, this change in their space’s relationship with the outside world is an interesting update to the Arrow Factory project, and comes at an appropriate time in its history. “After 10 years of working with it one way, something very drastic makes you rethink how it is that you’re working in the space—it gives it a whole other dimension,” says Ho. “There’s no reason to stop.”
In addition to Arrow Factory’s anniversary, Ho and Wang also recently celebrated the relocation and reopening of Wujin, whose long, communal table and tightly curated drink list has been recreated in a hutong about a half-mile west of Jianchang. They wanted to prolong Wujin’s existence as an “act of resistance,” and they’ll likewise keep Arrow Factory going for as long as they can—though the end could come at any moment. Wang says that there’s been “no conversation” with city officials about Arrow Factory’s tenancy since the bricking, but last week their neighbor Chez Gerard—a beloved grocery specializing in hard-to-source luxuries like artisanal French cheese and imported wine—was abruptly evicted, as was the corner store next to it.
“Almost every year we have this conversation,” Ho says. “Are we going to be able to exist? Are they going to shut us down? Is our landlord going to double our rent? It’s always been on the verge of a very precarious existence.”
All there is to do for now is continue existing, and see what comes next. In Beijing—a city in constant flux, where one year can feel like a decade—that could be anything.
Josh Feola
Related Stories