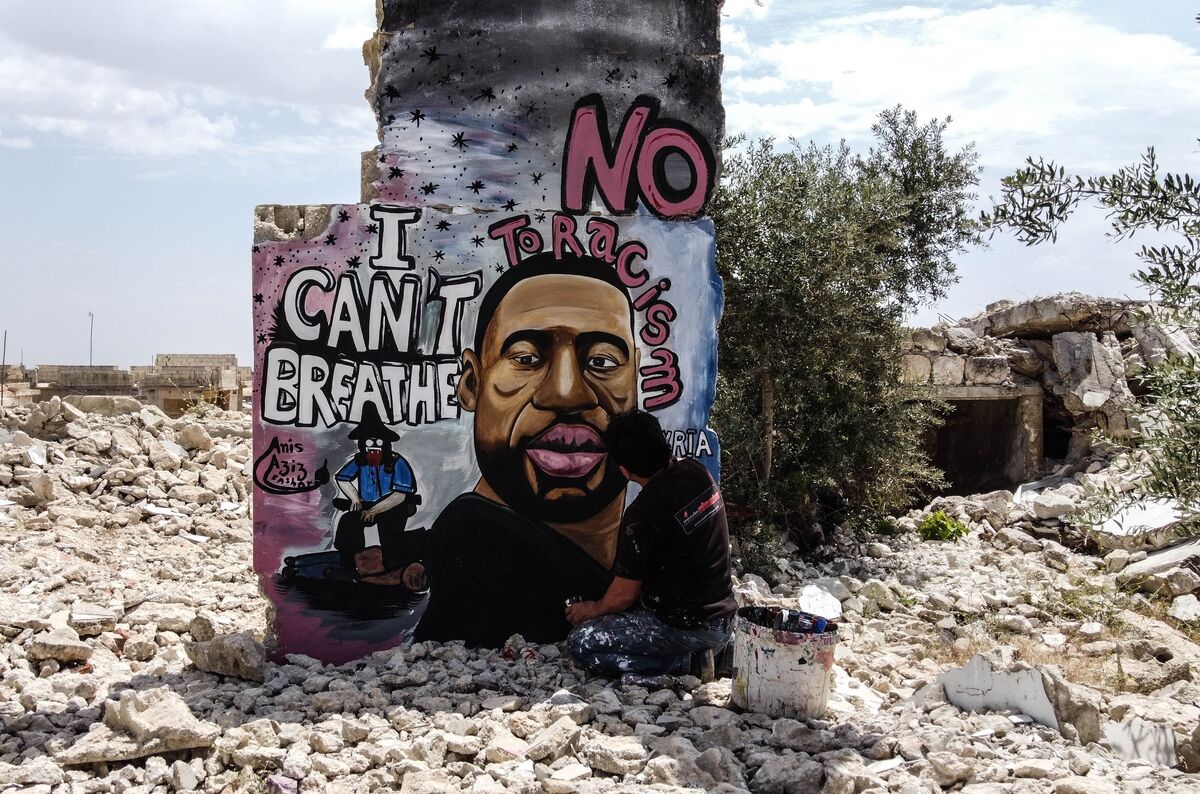 Aziz Asmar paints a mural depicting of George Floyd on a wall of house ruins in Binnish district in Idlib province, Syria. Photo by Izzeddin Idilbi/Anadolu Agency via Getty Images.

Walls covered in graffiti and street art can offer a synopsis of social movements. Recently, in response to police brutality and the killings of George Floyd, Breonna Taylor, Ahmaud Arbery, Tony McDade, and many others, artists worldwide have been ignited, taking to streets to express themselves. Syrian artists Aziz Asmar and Anis Hamdoun painted “I can’t breathe” across a fragment of wall in the northwest Idlib province; Italian artist Jorit Agoch made a mural of Floyd along with revolutionaries Angela Davis, Martin Luther King Jr., Malcolm X, and Vladimir Lenin in Naples; and on the Berlin Wall, Eme Freethinker portrayed Floyd and his final words. Driven by the necessity for reform and resistance, these artists are reclaiming public spaces.
In recent years, as the Black Lives Matter movement has gained momentum and protests occur internationally, graffiti has increasingly been used to propel its vision. The inherently political medium’s storytelling powers have become a way for communities to raise awareness, express themselves, and even educate the public.
On June 20th in Cleveland, Ohio, artists Stamy Paul and Ricky Smith led a group of local artists, graffiti writers, and activists in creating a Black Lives Matter street mural. While such efforts have proliferated since Mayor Muriel Bowser unveiled Black Lives Matter Plaza in Washington, D.C., the Cleveland mural, like some others across the U.S., is more elaborate and artful. Each bold letter encompasses kaleidoscopic images of fire, characters, words (such as “unity”), and messages (“Black women are beautiful”). 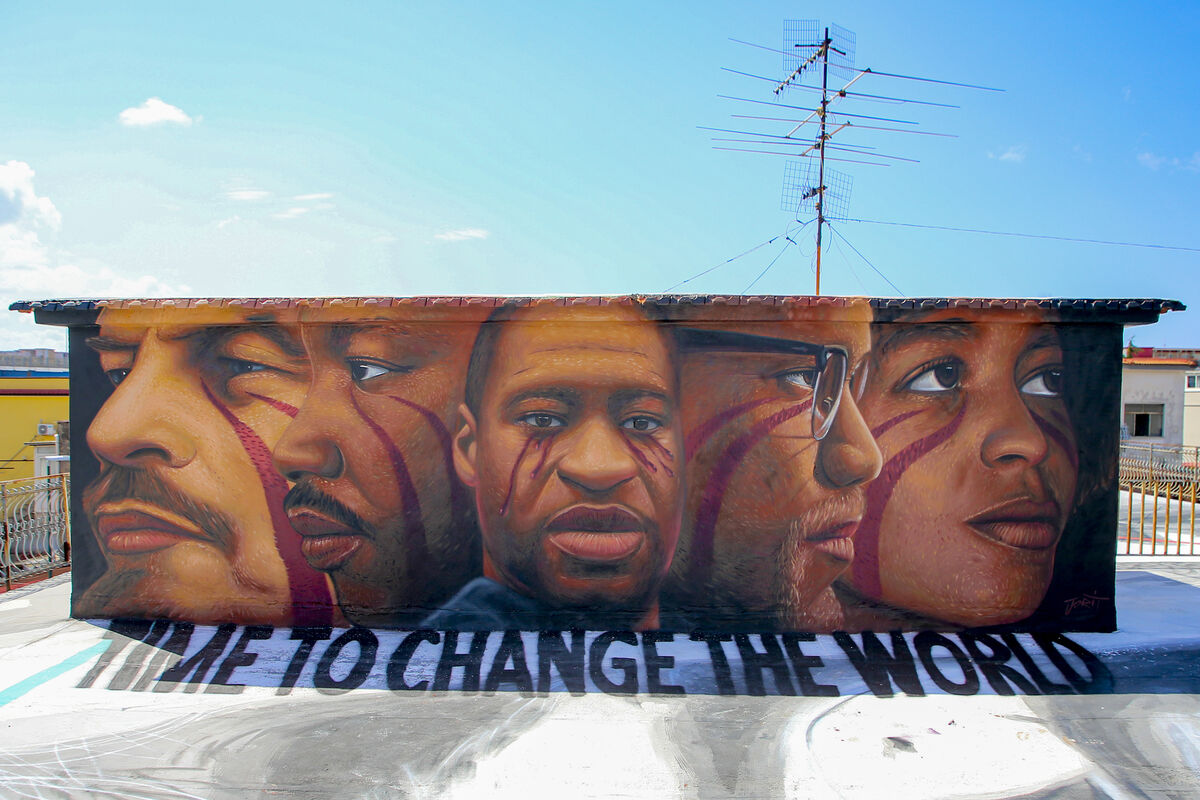 For graffiti artist Yoga, being involved in creating the Cleveland mural meant being able to reclaim and share his voice. “It was important for me to be a part in it, because it was me being heard, instead of being spoken for by someone else,” he explained. “I’m from the streets, I’m not in contract with nobody. And that’s why I think that public art is a great form for this type of message—I’m not in a contract to make you feel cute, to make you feel comfortable, to make you feel special. I’m here to speak about the issues and truth of it.”
Yoga considers graffiti inseparable from integrity and freedom of expression. He sees it as “a rebellious art form,” but also a means to “spread political messages and fight propaganda.” He added that it’s a way of communicating, “to say, ‘I’m still going to be heard regardless of your attempts to silence my voice.’”
While discourse around graffiti is often dominated by its subjectivity and navigating legalities, researchers have been exploring how it can be used as a tool in achieving societal transformation. Dr. Sabina Andron, a scholar and teaching fellow at The Bartlett School of Architecture at University College London, specializes in street art and graffiti, particularly in regard to how the surfaces of cities are sites of political contention. “The bottom line is the ability of people to take ownership of public space and to shape it through direct action, rather than representative democracy,” Andron said. “Graffiti remains almost a reliable constant; it’s something that we can count on to give us the pulse of the time.”
Around the same time that the Cleveland mural was taking shape, a similar event occurred in Toronto. Dozens of artists gathered at the fashion district’s legal “Graffiti Alley” to repaint the popular tourist spot in efforts to raise awareness of the anti-racism movement. “The idea was that everybody had to incorporate black into their pieces,” explained Paul Glyn-Williams, one of the artists. 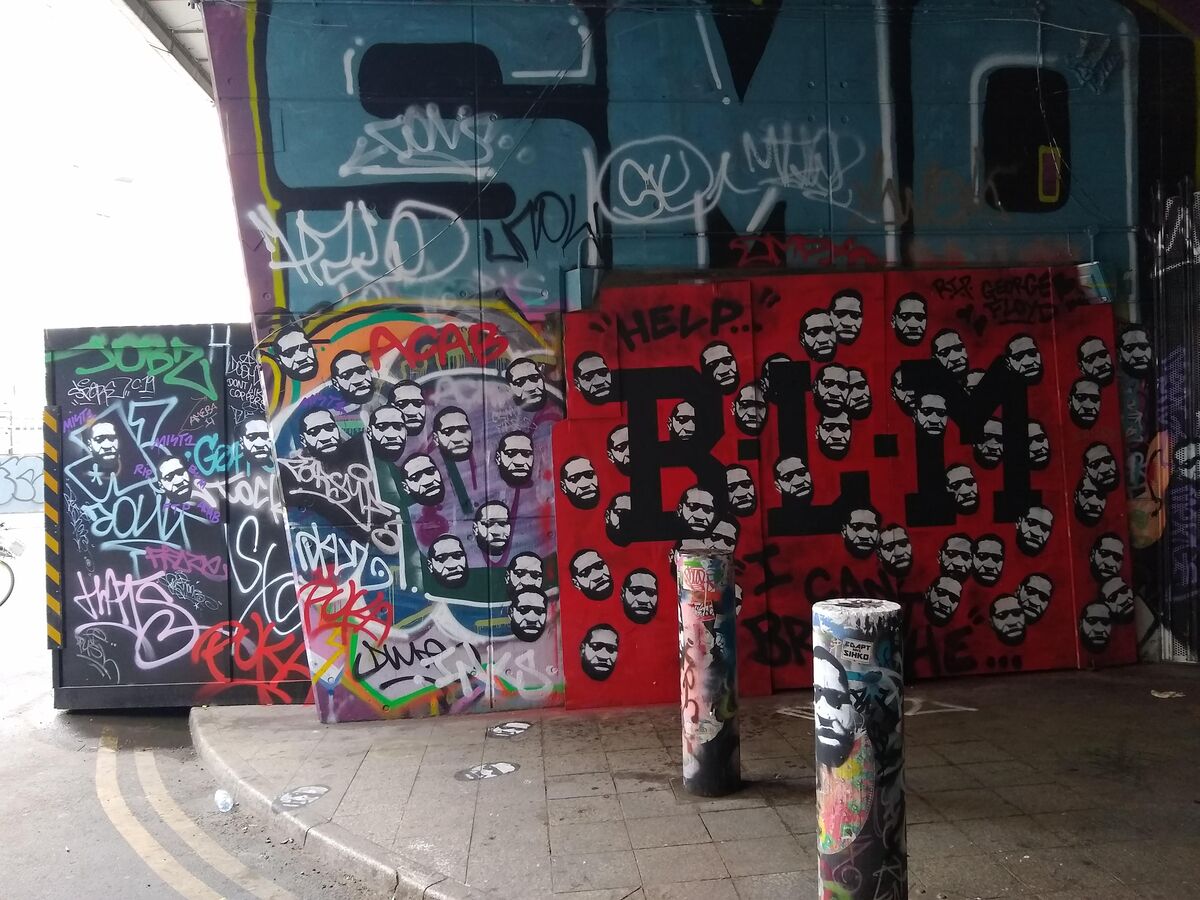 Advertisement
Glyn-Williams created a poignant rendering of Floyd, including his final words, “I can’t breathe,” covering his mouth, and the phrase “but we can hear you,” in bold, spray-painted block letters surrounding him. “It’s a reminder that his voice and the other voices weren’t in vain,” the artist said. “I wanted people to understand that we heard and felt what happened. People must remember that—to keep carrying on and not letting people die in vain.”
The clear link between graffiti and activism has led to the creation of organizations that harness the art form’s power to work towards social change. For example, Cleveland’s Graffiti HeArt, led by Stamy Paul, aims to fund art scholarships and urban development projects within communities. Another such organization, Few and Far, began in Oakland, California, in 2011 by an international group of women driven by “social justice, female empowerment, and activism in the streets,” explained the group’s founder, Meme. “Art on the streets is a way of storytelling,” she said. “It has often been the visual counterpart to many movements, as murals and graffiti respond almost immediately to our constantly changing times.”
In Richmond, Virginia, Meme organized for the barriers surrounding Robert E. Lee’s liberated statue to be painted with words and phrases including “unity,” “our street,” and “BLM.” The artists engaged the local community, including children, and the barriers became an artistic statement—a place for people to paint what they needed to voice. As discourse rages over the removal of confederate and colonialist monuments across the U.S. and around the world, graffiti has drawn attention to these contentious areas of history. Such statues have become targets for the movement, with tags of “BLM” and other expressions of solidarity and justice dripping across monuments, like the Lee statue in Richmond and a Columbus statue in Miami, for example.
“The idea of defacement as a political act has an important role to play in the current struggle over decolonization and statues,” said Dr. Tom Houseman, from the Department of Politics and International Relations at Leeds Beckett University. This kind of defacement, he added, “is about confronting the presence of history in the present.”
Yet to effect the necessary social and institutional change that the Black Lives Matter movement calls for, conversations surrounding racism and oppression need to continue, particularly by those who are normally too distracted with day-to-day life and responsibilities (work, family, etc.). “As grassroots public monuments, graffiti can help in this: reminders to stay outraged and committed, as well as prompts for the next generation of activists to start learning about things that they will likely not be taught about at school,” Houseman said.
As protests continue to occur throughout the U.S. and around the world, the writing on the walls across the globe endures, demanding we fight for equality and reform.
Rani Boyer
Related Stories