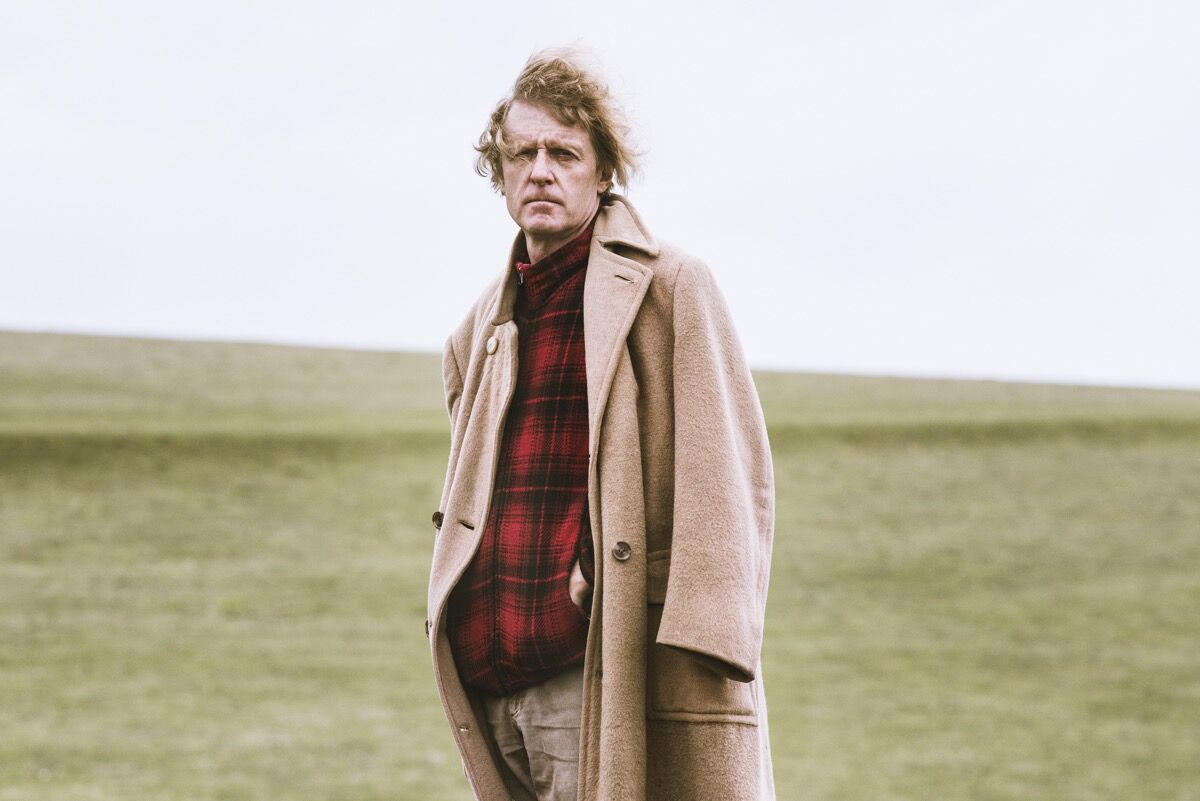 Two vases sit near each other in London’s Serpentine Gallery. On one, a man in a hoodie proudly stands with his guitar next to the 12 gold stars of the European flag. A short walk away, the other shows the image of another Briton in a baseball cap holding a hammer, his sweatshirt faintly patterned with Union Jacks.
Though their iconography is distinct, these pieces by British potter, broadcaster, and 2003 Turner Prize winner
Grayson Perry
are superficially similar in their color, size, and depiction of defiant Britons picking a fight with the onlooker. They feature in a documentary aired in the U.K. in late May, “Divided Britain,” which saw Perry speaking to the rival camps in Britain’s Brexit debate and using the imagery they provided to create each vase.
“The title of the piece is Matching Pair,” Perry tells me over the phone. “The message behind it is we have so much more in common than we have which divides us. Which sounds a bit pat and vague, but I’m hoping that’s the message. It needs to be heard by both sides, who need to meet and stop demonizing each other.” 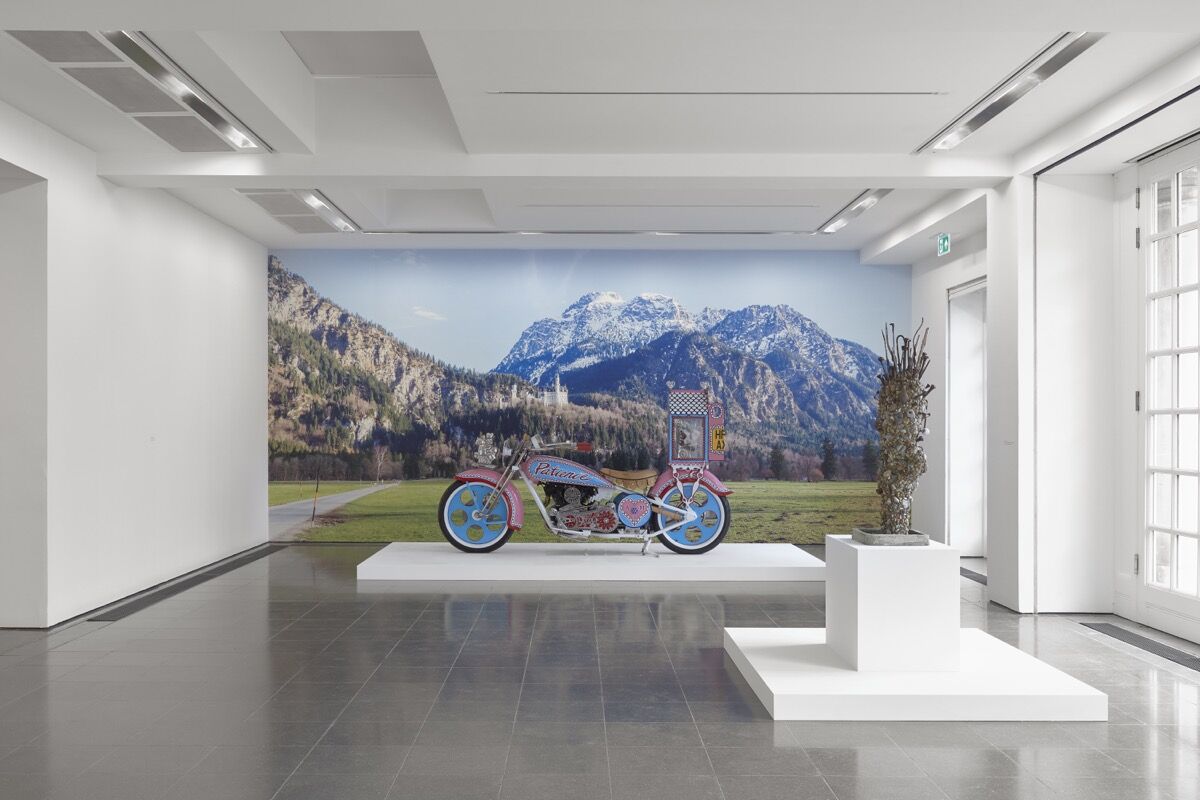 Perry’s amusing and accessible, if a little glib, response is typical of his show, in which tabloid language dominates and satirical barbs spear issues of nationalism, tribalism, class, migration, and gender.
The exhibition, which opened on June 8th, the same day as Britain’s recent general election, is spread across four rooms, the artist’s tapestries hung around his cast metal, woodcuts, ceramics, and pre-made objects seen in his broadcast projects, including a custom pink motorcycle on which he toured Bavaria for BBC Radio 4 in 2010.
Visitors first encounter a white glazed pig with slots in its flank for people to insert donations depending on how they see themselves: “Them,” “Us,” “White,” “Rural,” “Male.” An adjacent glazed ceramic, Puff Piece, is daubed with fictional quotes (all positive) from prominent art critics and intellectuals including The Guardian’s Adrian Searle, Dave Hickey, and Bernard-Henri Lévy. (Art criticism is a sore spot for Perry: He used part of his prestigious 2013 BBC Reith Lectures to lament a negative Guardian headline from 12 years ago.) 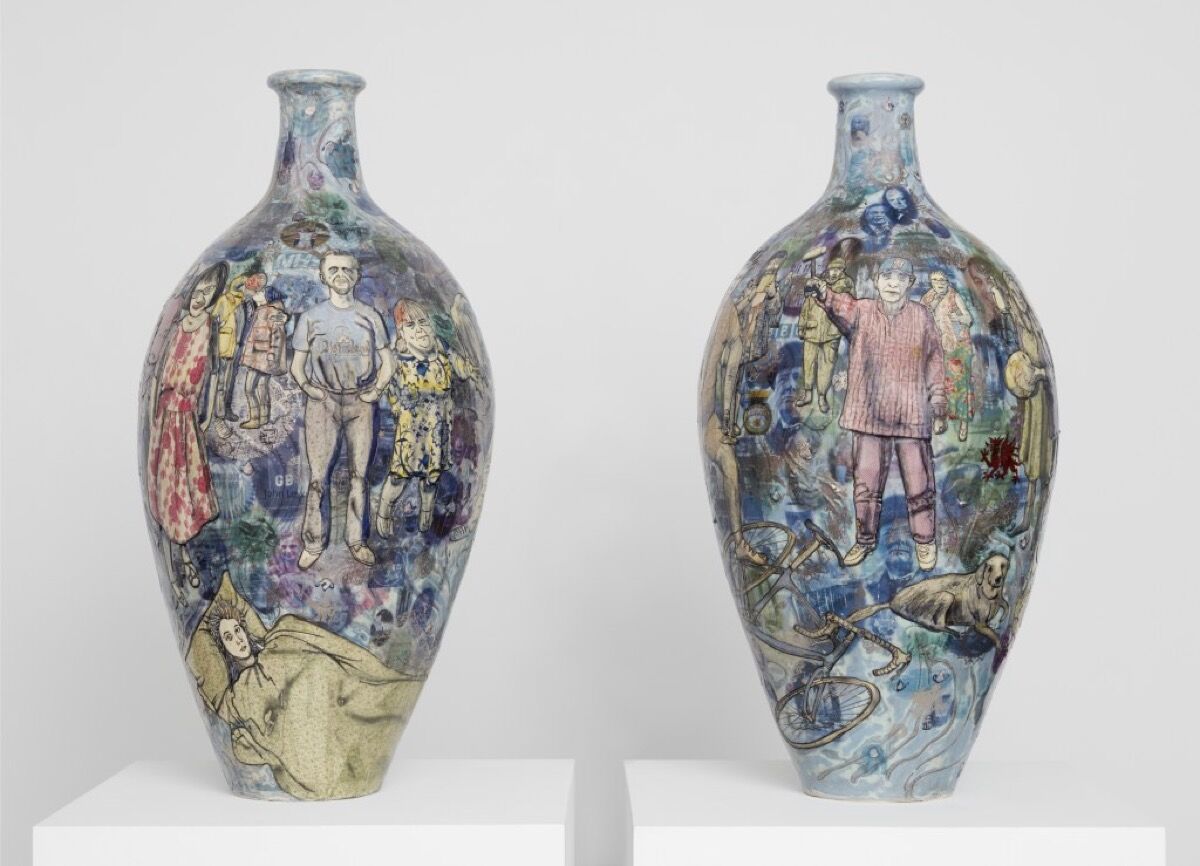 Advertisement
“They are imaginary quotes like the ones you might see outside the theater, but they’re quotes about me,” Perry says of the work. “It’s like a self-advertising thing. It’s a fun piece about the relationship of artist to critics and whether we take them seriously.” So should we? “I couldn’t possibly say,” he laughs.
In the next room, a vase titled Alan Measles and Claire Visit the Rust Belt (2017) is composed like a Biblical scene, with Donald Trump kneeling before Perry’s teddy bear, Alan, while Melania Trump and Perry’s cross-dressing alter ego, Claire, sagely look on. It reprises a 2009 work, World Leaders Attend the Marriage of Alan Measles and Claire Perry, a ceremony attended by Vladimir Putin.
“It’s just weaving my own personal mythology,” says Perry. “Alan as a hegemonic character is all cool like some kind of superhero, who has come down and told the world to calm down.”
In the more modest context of his vases, the topics he tackles can seem predictable and flip. But Perry’s larger woodcuts and tapestries stretch across walls, lending his symbols resonance. The 2016 Digmoor Tapestry, for instance, is a precisely embroidered plan of suburban Skelmersdale, a town in West Lancashire, its surface emblazoned with explicit graffiti and overlaid with a cloud of nebulous smog. 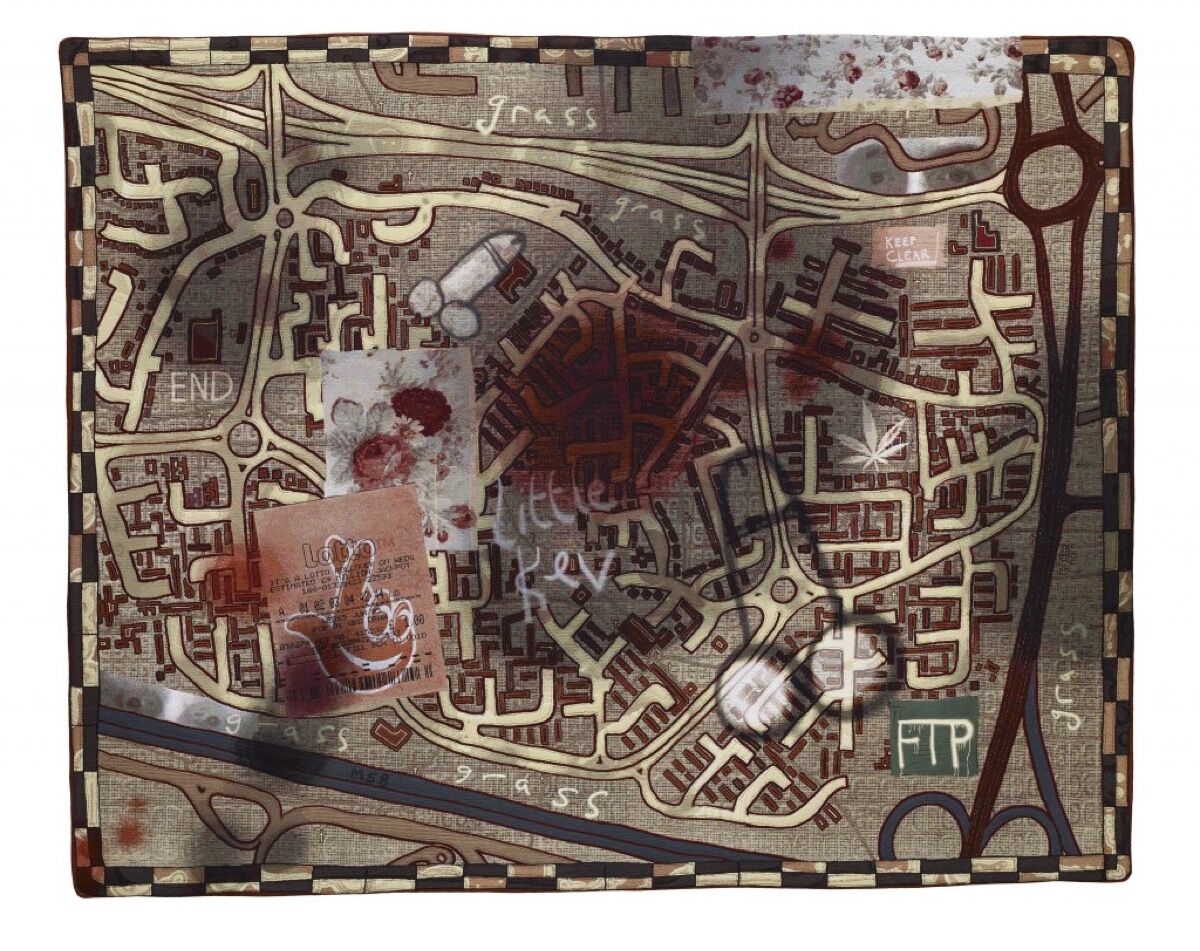 The exhibition’s central room is dominated by state-of-the-nation tapestry Battle of Britain (2017), a looming dystopian landscape, fronted by a figure on a BMX peering across a derelict playground, fields receding in front of him, a rainbow straddling the scene. The piece dwarfs the two Brexit pots nearby, which are underwhelming outside a documentary context.
The contradiction with Perry is his success as a public personality, and he knows it. His creative sensibility, his precision in skewering hypocrisy, his pathos for connecting with people through feeling as opposed to logic—something the “Leave” campaign here resolutely failed at—means his art is lost without television.
His broadcast work and his artistic creativity have fused, and the latter loses out by being less communicative. This may answer for the way in which Perry dodges difficult questions, and underplays the role he thinks his art can play.
“I’ve no great social ambitions for the artwork. It’s doing the same as all my other artwork, in that it’s a nice thing to look at and might make people think,” he says. “My thesis is that the Brexit schism is mainly emotional and cultural rather than factual and political, so art can deal with the ambiguity very well.”
The show’s final room leaves viewers with a sense of levity, by way of a custom-built ladies’ bicycle with a candy stripe, and a gilded skateboard emblazoned with an outline of the Duchess of Cambridge. 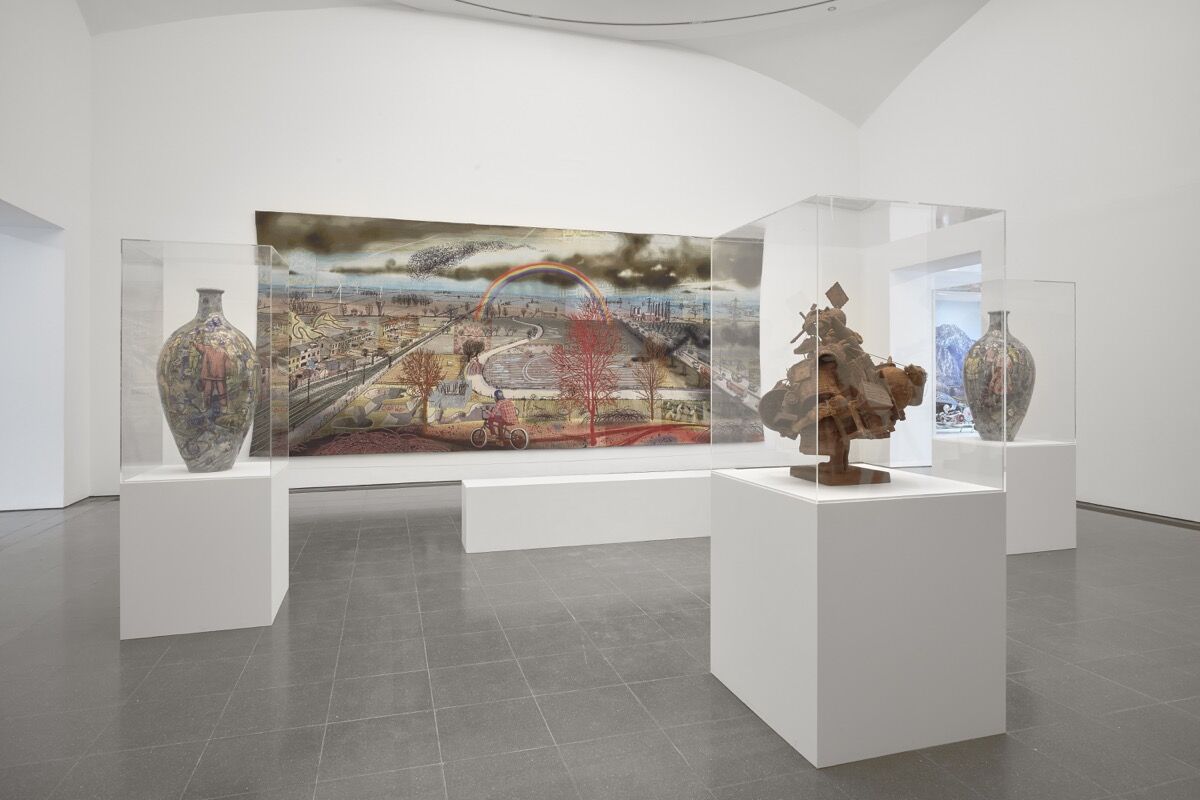 “One of the dangers art criticism often has is that it separates these things out,” Perry concludes.
“One of the first questions ever asked of me after the Turner Prize was: ‘Are you a loveable character or are you a serious artist?’ I said, ‘I’m both, deal with it.’ In the eyes of many people, the hyper-educated, they see seriousness as a cypher for meaningfulness. Humor is very important, especially in our British culture, you’ve got to take humor very seriously. Countries without humor are often in a really bad place.”
So humor makes claims about its own seriousness, but also negates it. Perry can be part of the elite, but also outside it. And you can admire this exhibition, but also walk away dismissing it.
Rob Sharp
Related Stories