Greek Mythology Tells Us That Mermaids Come in All Shades

Jacqui Palumbo
Jul 17, 2019 11:35am
On July 3rd, Disney announced that 19-year-old Halle Bailey would be the latest actress to star in a string of live-action reboots. Bailey, who is black, was cast as Ariel, the wistful redheaded mermaid who gains her legs to walk among humans. Lightning-fast digital artists offered up new fan art for The Little Mermaid on Twitter, while trolls attempted to sow discord across social media. Not everyone who deplored the casting choice is a bad actor, though. There is an understandable impulse to preserve childhood nostalgia, but Disney’s version from 1989 is not the source material; neither is Hans Christian Andersen’s allegorical tale from 1837, which is much more gruesome and nearly ends in the protagonist murdering her prince.
Ariel’s story really begins in Ancient Greece. According to lore, she is a nereid, one of the dozens of daughters of the sea-god Triton. This isn’t the first time that the internet has been set alight over the suggestion that famous figures of antiquity could be anything but white.Last year, black actors playing Achilles, Patroclus, Zeus, and others in Troy: Fall of a City (2018–ongoing) evoked similar ire. The year before, Classics scholar Sarah Bond was targeted for her essays for Forbes and Hyperallergic dispelling the myth that Greco-Romans and their sculptures were homogeneously white. People in Western antiquity were a range of skin colors, and their statues were actually painted in vivid colors. Bond argued that the continued idealization of white beauty in art fuels contemporary white supremacy beliefs. 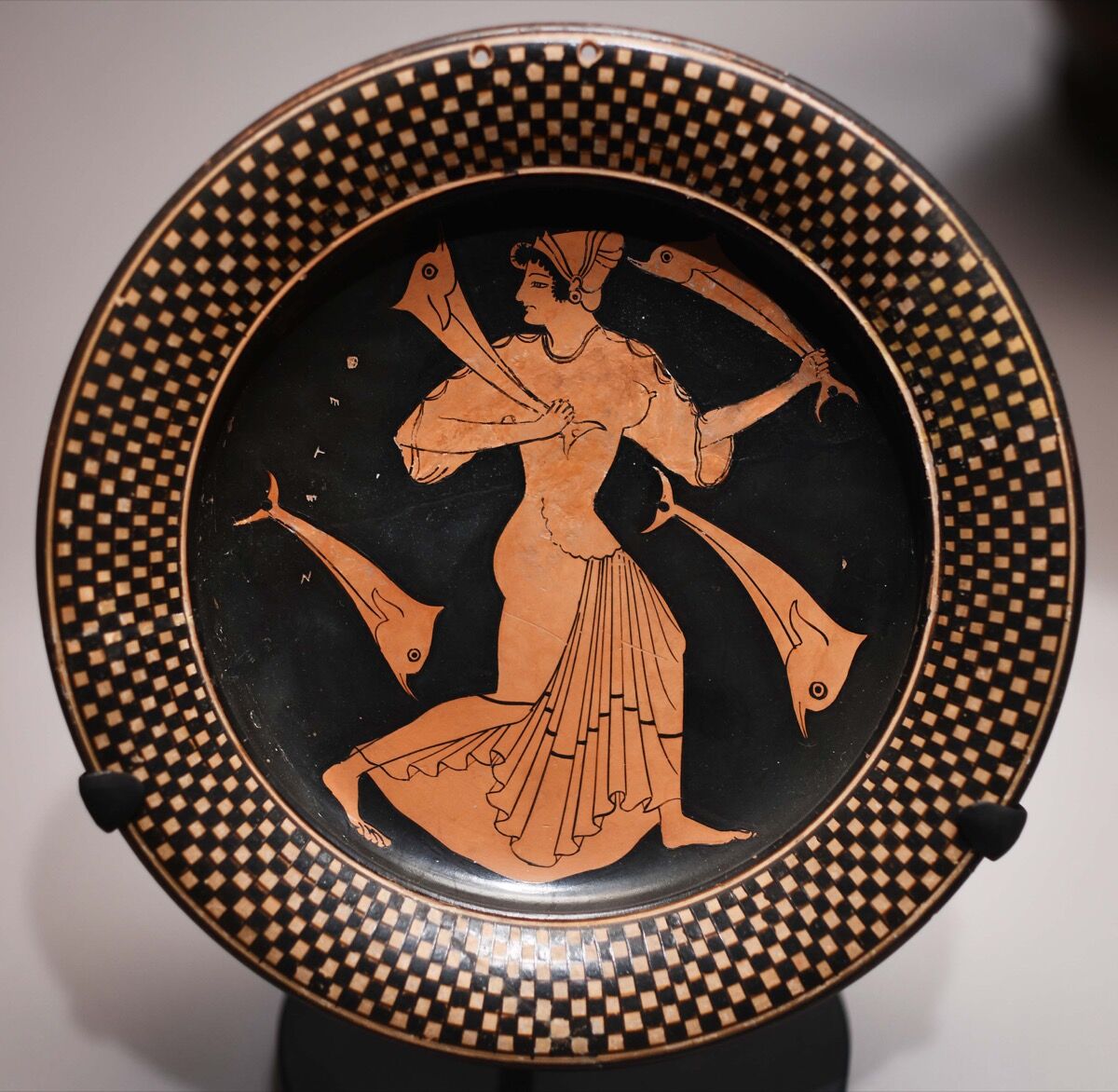 Attributed to Circle of Euthymides, Plate with Thetis and dolphins , ca. 510-500 B.C., Greek. Photo by Orientalizing, via Flickr. 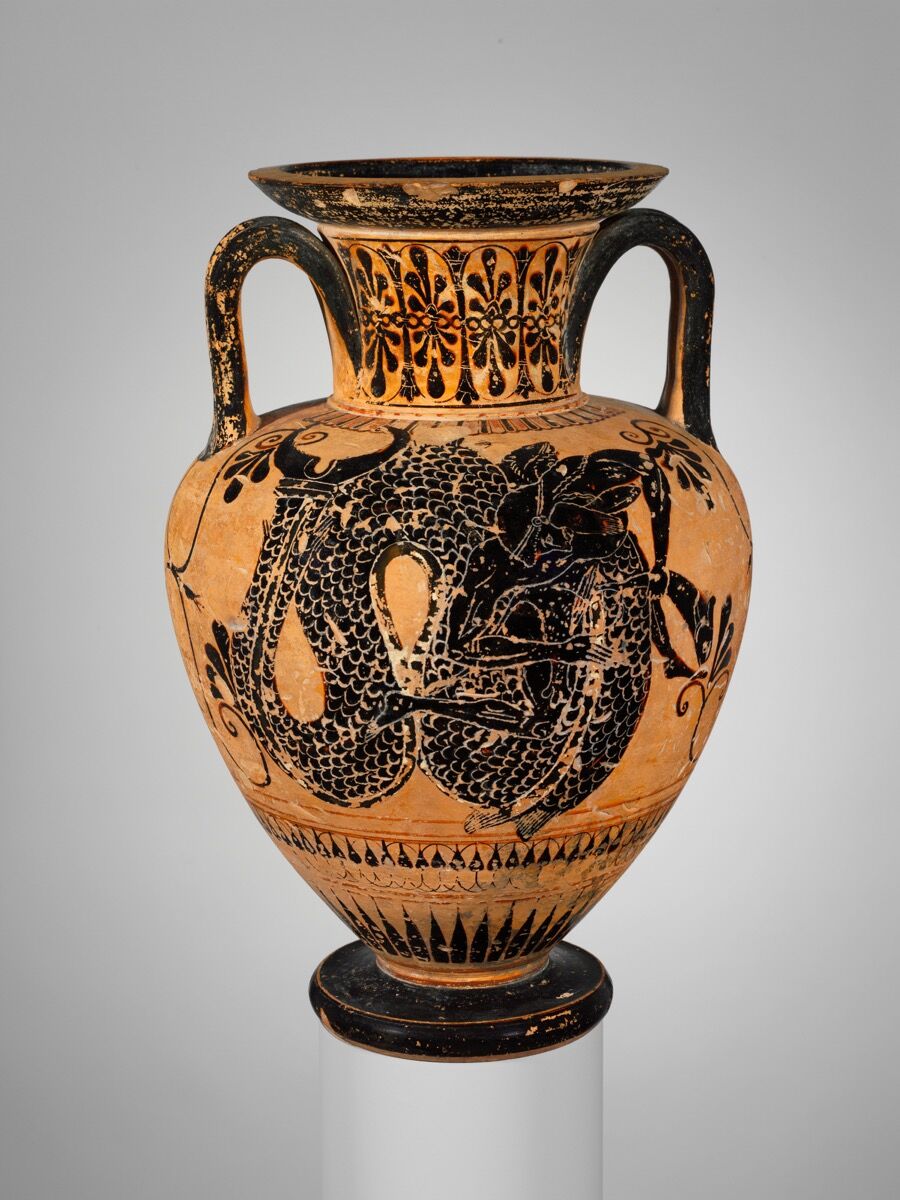 That argument is grounded in history. The Western standard of white beauty in art can be traced back to the 15th-century discovery of a Roman marble statue, Apollo of the Belvedere (circa 2nd century CE). In a seminal 1764 treatise, which became the cornerstone of modern art history, Johann Joachim Winckelmann celebrated Apollo Belvedere as the pinnacle of beauty. The statue also became the foundation for Dutch anatomist Pieter Camper’s notions that beauty could be measured from facial proportions—notions that would later fuel Nazi Germany’s ideas of Aryan supremacy, and continue to be referenced in far-right circles today.
Our entire Western, modern sense of race can be traced back to the era of the Scientific Revolution, which “was marked by a desire to categorize, label, and rank everything from plants to minerals,” Bond wrote. “It was only a matter of time before humans were similarly subjected to such manmade systems of classification.”
Race is a social construct, and prejudices function differently by culture or era. Today, “we mistake race for physical appearance,” said Rebecca Futo Kennedy, a scholar of Greek and Roman history, languages, and culture. “Race is not the physical markers; it is the way that we structure ourselves.” She emphasized: “Not everybody’s concept of race has been shaped by the transatlantic slave trade.”
Advertisement
Ancient Romans did not have a racially structured society. Their slave trade was based on the bounties of war—anyone was one fight away from becoming a slave. Freed slaves became citizens, creating a hodgepodge of ethnicities under Roman identity. The Greeks, on the other hand, had various “micro-identities” based on their polis. Some city-states were racially structured—Athenians and Spartans, believed themselves to be superior, but it varied by region.
But across both civilizations, depictions of gods and goddesses weren’t intended to be naturalistic representations of people, Kennedy said, but creative interpretations. Assigning a simplistic modern view of race or skin color to an ancient goddess is faulty by nature, because their creators didn’t have the same sense of race and ethnicity that we do. Doing so “is such an act of projection on our part and a desire to claim ownership of the unreal and the imaginary,” Kennedy said.
Nereids weren’t given particularly distinctive personalities to differentiate between them in Ancient art, but they have appeared on vases, in mosaics, and as relief sculpture and statues. Their skin color could be symbolic of gender or age—young maidens were often pale while adult men were depicted in reds, browns, or black—but colors were also determined by the medium. In one Greek vase painting from the Archaic period at the National Archaeological Museum of Tarquinia, black nereid figures circle Heracles fighting a sea god. In a plate from the Late Classical period at the State Hermitage Museum in Saint Petersburg, a red nereid hitches a ride on the back of a slightly displeased-looking dolphin. Greco-Roman mosaics range from pale to reddish-brown skin tones. 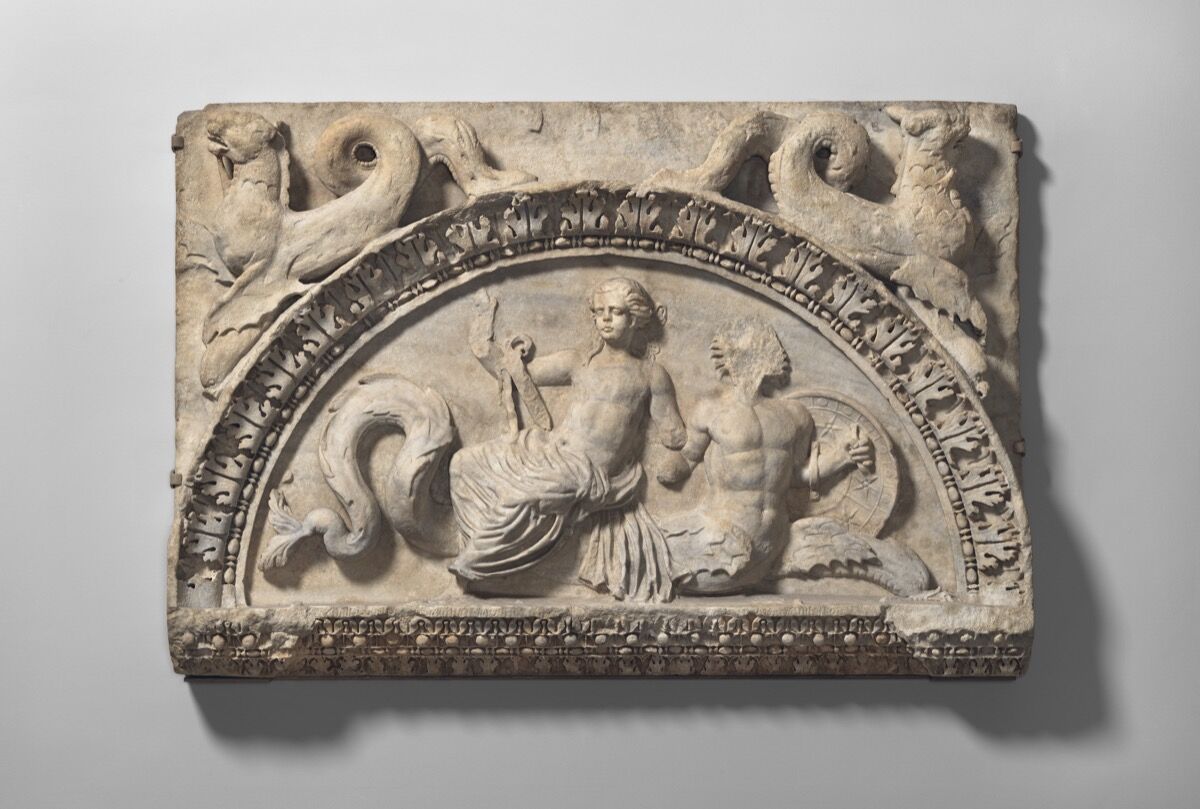 Greeks also experienced color in a wholly different way than we do today. They lacked a word for the color blue, and the Homeric “wine-dark sea” of both The Odyssey and The Iliad has stumped scholars and scientists: It has been suggested that Greeks were congenitally colorblind, or their wine was actually blue, or there was an outbreak of red algae in the Medditeranean Sea. According to scholar Maria Michela Sassi, there’s a more poetic explanation. Ancient Greeks had a complex and specific “chromatic culture,” she wrote, and instead of defining specific hues, they categorized colors by their other qualities, like movement, or light. The sea was like wine because of the way it glittered in the light.
There is one thing that hasn’t changed much over time, however: the belief that our gods look like us. We see it today through the persistent and pervasive belief in Western society that Jesus was white. Likewise, in antiquity, a fragment of a poem by the 6th-century BCE Greek philosopher Xenophanes of Colophon stated Ethiopians believed their gods were black while Thracians imagined them pale and red-haired. It is not so much that we were created in God’s image, but the other way around.
But Western society is not uniformly white, and representation should follow. Tiana from The Princess and the Frog (2009) shouldn’t be the token princess for young black girls to look up to. Disney characters, based on goddesses or otherwise, are idolized with near-religious fervor, and offering diversity to encourage a positive self-image can be a powerful cultural marker. 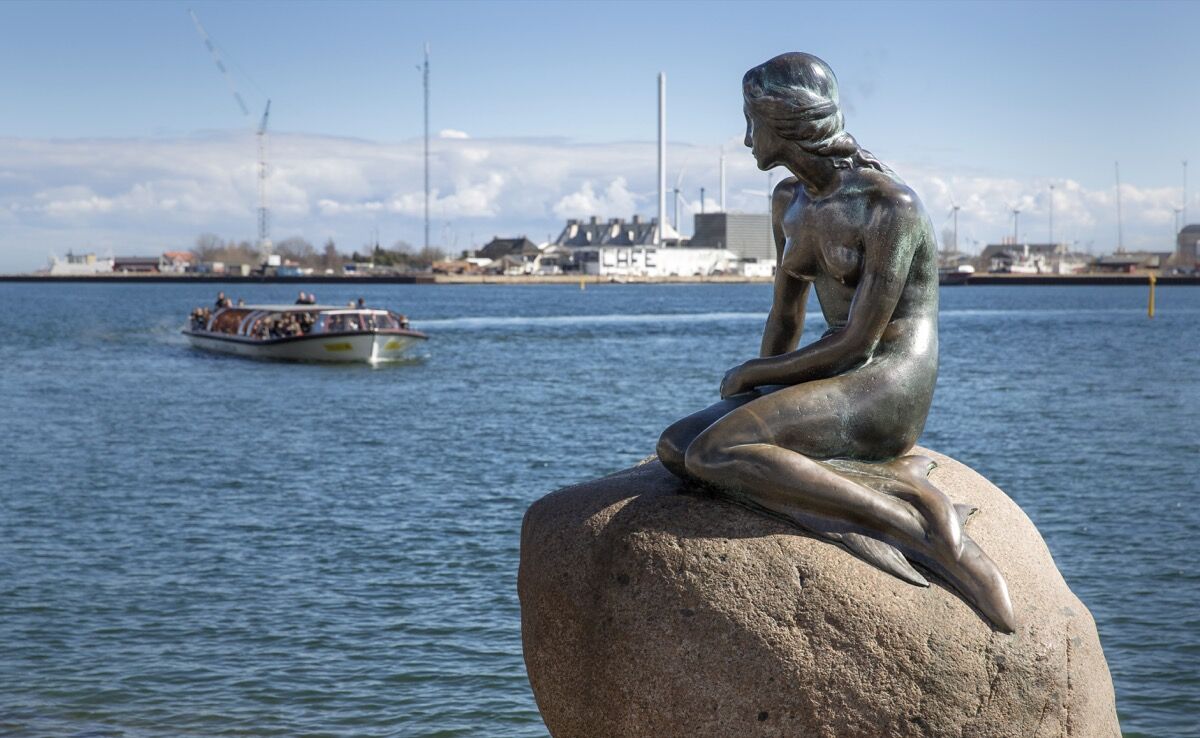 One Twitter user emphasized just how important representation was for her. “As a white-skinned redhead, I have very strong feelings about #TheLittleMermaid. Ariel changed my ginger world. The mean ‘jokes’ ended. I became envied for my hair. And you know what? I want little black girls to experience that same feeling with new Ariel.”
Ariel can be any race, because race is a social construct, and mermaids can be whatever color we please, because they don’t exist. If we’re going to go by the source material, the representation in ancient mythology fully supports fluidity between retellings.
“We have dozens and dozens of versions [of myths] because everybody re-conceptualizes them through their own lens,” Kennedy said, explaining that Athenians, Spartans, Corinthians and the like each had their own versions. “To try to create them and craft them into singular versions that can’t ever be changed is fundamentally opposed to how myths functioned in the ancient world where they were created.” In short, bring on the black mermaids in the wine-colored seas.
Jacqui Palumbo is a contributing writer for Artsy Editorial.
Thumbnail image by Dylan Bonner (@dylanbonner90). Courtesy of the artist.
Related Stories