Gregory Crewdson on His New Photographs, Daily Rituals, and Art as a Refuge 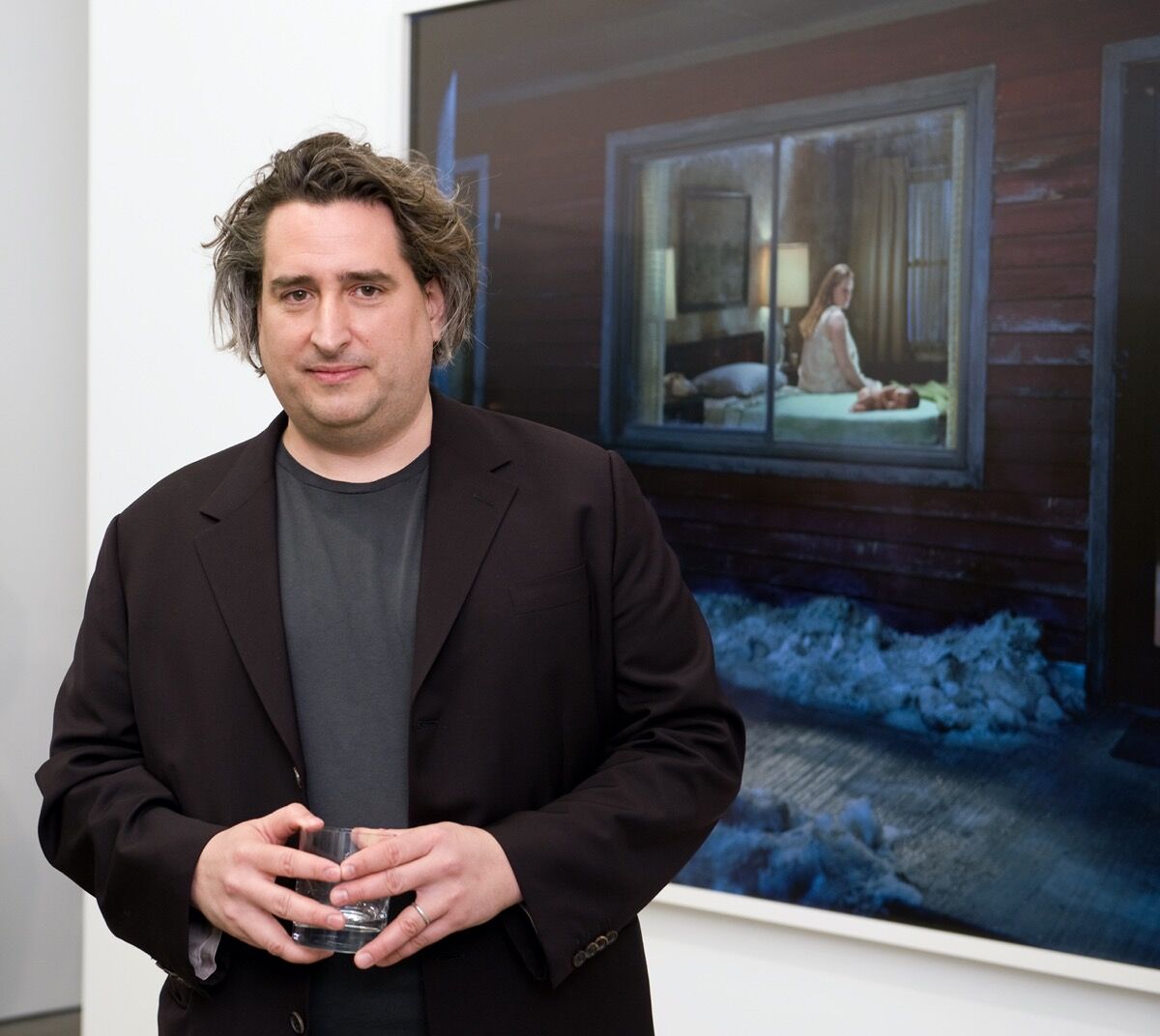 Gregory Crewdson
is a creature of habit. “I try to do almost the exact same thing each day,” he said from his home in Becket, Massachusetts, explaining that his routine is structured down to the food he eats. Each morning, the photographer wakes up early to travel to a picturesque and remote pond in the Berkshires, accessible only through the Appalachian Trail. “I ritualistically make time during the summer months to do long-distance swims,” he said. “That, to me, is central to my existence.”
Crewdson has staged stories of American melancholy and mystery for the past three decades, in claustrophobic domestic interiors, on quiet suburban streets, and in disquieting landscapes. Recently, his settings have had links to his personal life. In his last major body of work, “Cathedral of the Pines” (2013–14), he took solace in his new home of Becket, following a divorce and a departure from Brooklyn. The forested terrain became the backdrop for his doleful figures, lost in thought among the towering trees, or reclusive in their small wood-paneled homes. 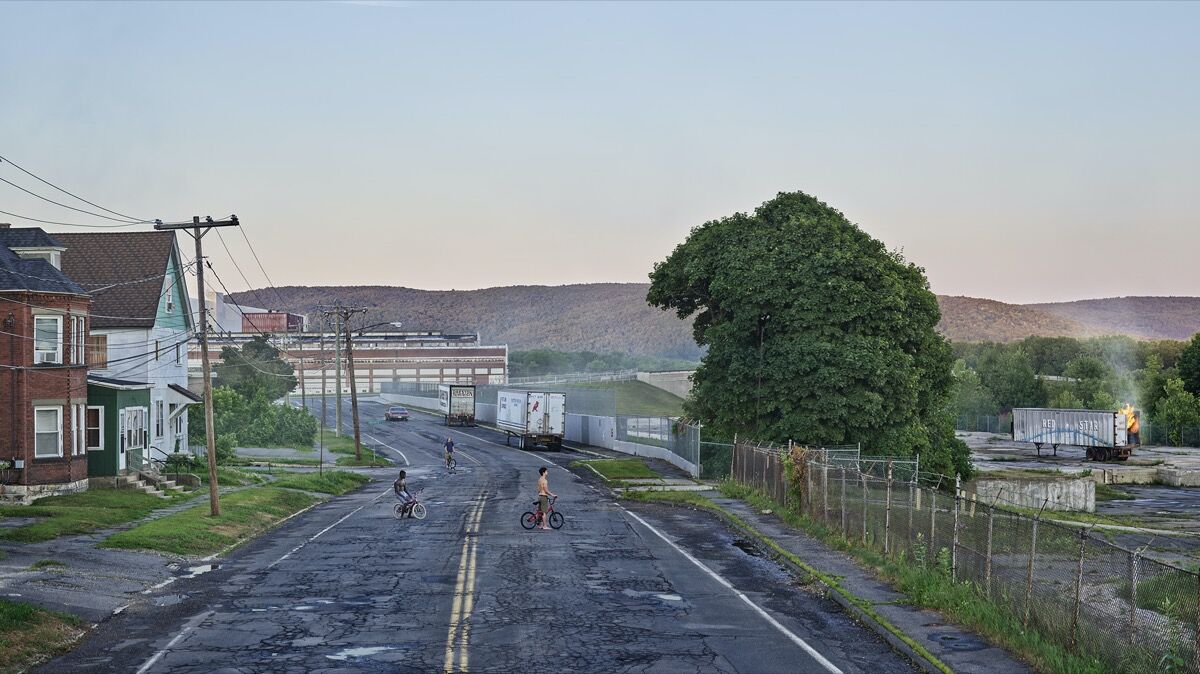 This September, Crewdson is introducing a new series, “An Eclipse of Moths” (2018–19). The work is being exhibited at Gagosian in Beverly Hills, California, from September 24th through November 21st, and an accompanying book will be published by Aperture. The photographs are set in a quiet, dreary post-industrial town—in reality, Pittsfield, Massachusetts—with familiar mists from past series creeping into the scenes. The figures, small in the frame, appear isolated even when they are together. Like in much of Crewdson’s work, a sense of malaise permeates the surface, though the cause is never quite clear; his subjects navigate their small worlds, searching for something beyond the boundaries.
Crewdson’s tendency toward rituals and obsession extend to his practice. “I’m monomaniacal about almost everything,” he said with a laugh. That approach is in part because of the nature of his work: large, cinematic productions which require location and lighting teams, as well as coordination with local officials.
But long before he assembles his crew, he scouts locations—sometimes for months—driving around while listening to podcasts (mostly pop culture, unsurprisingly many about film). He returns to the same places over and over, checking the light at different times of day and in different weather.
“At some point, an image comes to mind, and then you commit to it, and then start building up,” he said. He asks himself: “What’s going to happen here?” 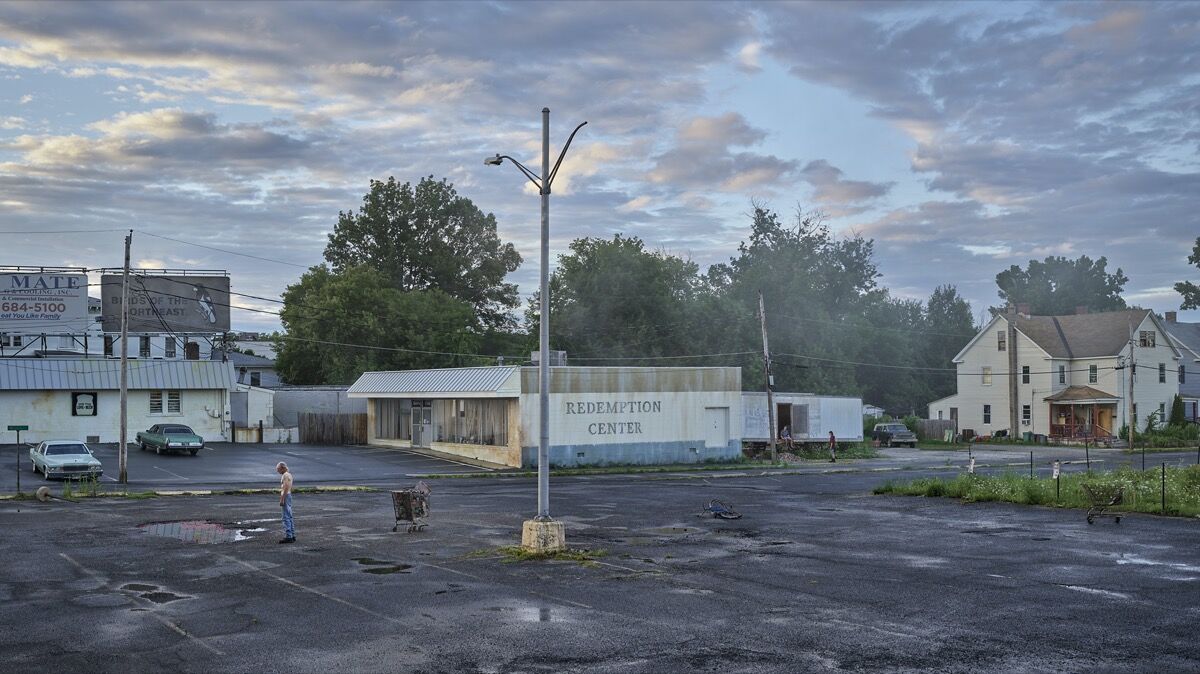 Advertisement
The title for “An Eclipse of Moths” came to Crewdson early on. When an eclipse—the term for a group of moths—is attracted to a light source, the insects block out its illumination. It’s a poetic metaphor for the sense of sorrow and detachment the characters of Crewdson’s series seem to experience. But it also alludes to the renewal they seek, as they stand outside of the dilapidated “Redemption Center,” or stop to gaze into the setting sun: The light, though concealed, is still present. The moths, fragile and ephemeral creatures, will eventually disperse.
The scenes in “An Eclipse of Moths” take place just a 20-minute drive away from those of “Cathedral of the Pines.” But Crewdson has known these environments long before he moved to the Berkshires, where he commutes back and forth to New Haven to direct the MFA photography program at Yale. Originally from Brooklyn, Crewdson spent his childhood summers in a cabin in Becket with his parents and siblings; the region’s landscapes set the backdrop for his life as he came of age.
“In a direct way, landscape is filtered through my own kind of imagination and childhood and biography,” he said. In his two recent series, he sees connections threaded together through the cerebral nature of the work.
“I do see them as interrelated projects, although maybe different sides of the same coin,” he explained. “They have different moods and atmospheres, but to me, they’re related in different ways, maybe psychological ways.”
Over the course of his career, Crewdson has used hyper-detailed, uncanny settings to descend into his characters’ interior lives. In his series “Twilight” (1998–2002), the home becomes an untenable site for creeping horror. In one photograph, an Ophelia-like figure floats in her flooded living room, eyes gazing past the camera. In another, a fearful man on all fours is surrounded by drilled holes in the floorboards, pillars of light beaming through each. The scene recalls Crewdson’s formative childhood memories of straining to hear his psychoanalyst father’s private sessions in their Park Slope basement—Crewdson’s own fulcrum for mystery in the domestic space.
But after his series “Beneath the Roses” (2003–08), the photographer has refocused on smaller productions in real locations, instead of building top-to-bottom sets. He has also seen his work become more nuanced over time. 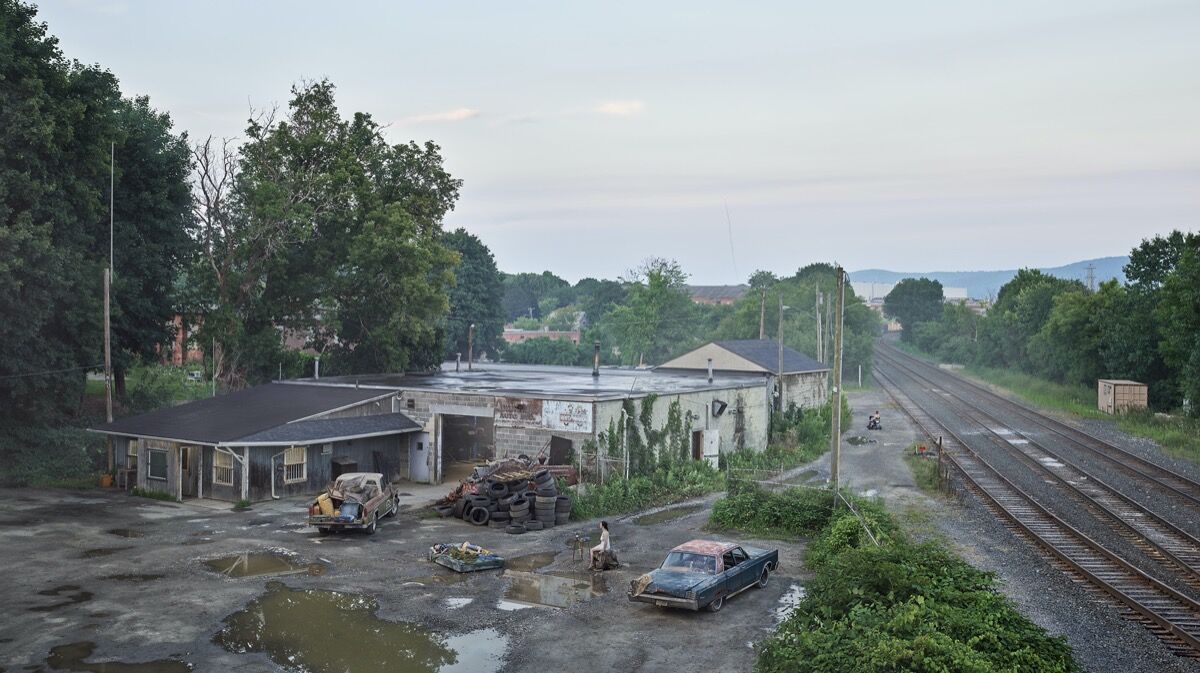 “If you go back to the earliest or the earlier stuff, it’s definitely more hyperbolic, it’s more exaggerated, it’s more theatrical,” he commented. “And I feel like if anything, in these pictures, it’s definitely clear they’re becoming more and more distilled, or quieter, or more open-ended.”
It would have been easy to make a more blatant political or socioeconomic statement through “An Eclipse of Moths.” In the post-industrial city of Pittsfield, Crewdson witnessed the effects of the opioid epidemic’s grip on the region: the ambulances returning to the same homes day after day, set in their own inevitable routine.
Today, the photographs have another layer of implications. Though they were shot when distance between people didn’t imply a pandemic, Crewdson sees a linearity to the times in which we are living.
“As it turns out, they’re weirdly relevant to the moment we’re in,” he said. “No one could have guessed that.”
But though the American landscape has been his primary backdrop, Crewdson doesn’t inject his work with current events, or even a sense of time. Part of that timelessness in “An Eclipse of Moths” was enhanced through working with the city of Pittsfield to temporarily replace contemporary-looking street signs, and to avoid cutting grass or paving roads in scouted locations during production.
Still, Crewdson doesn’t turn a blind eye to the complexities of the settings he chooses. “I do want to acknowledge the place and the experience of making [the photographs],” he said. “It’s that weird balancing act that you look for in art—that fine line between what it is and what it isn’t.” 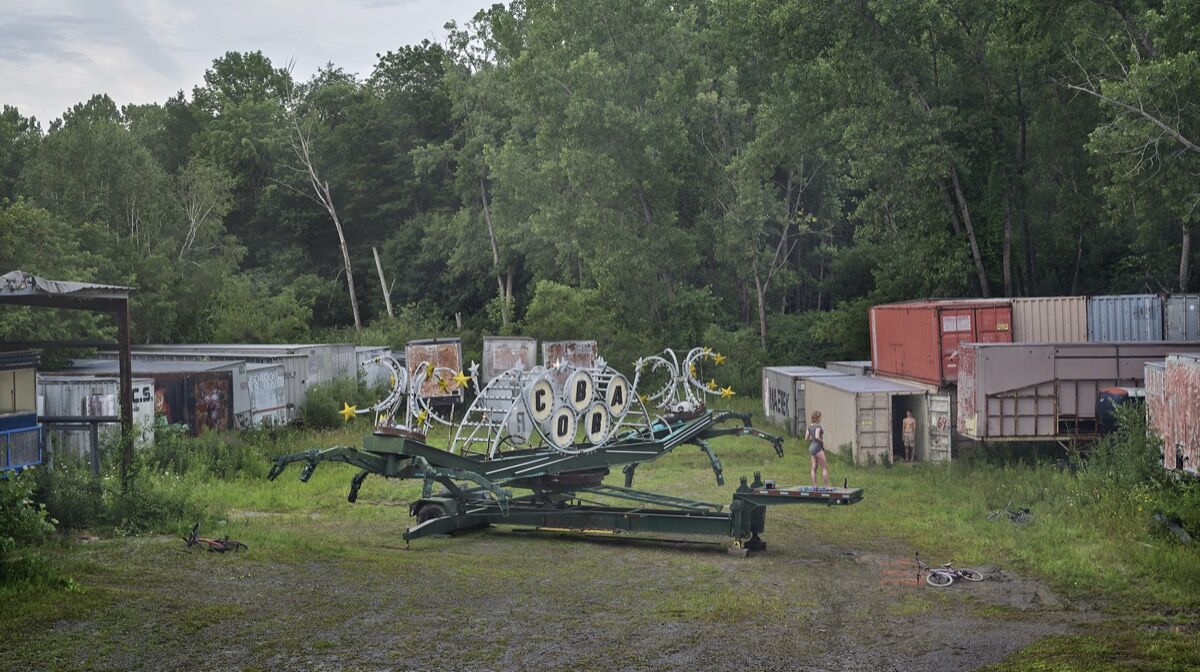 By now, Crewdson’s influences are well documented. His father took him to see the 1972–73
Diane Arbus
retrospective at the Museum of Modern Art when he was 10 years old. (“That was the first time I kind of understood that a photograph could be psychologically powerful and urgent,” he recalled.) He was struck by the images of
Stephen Shore
and the films of Steven Spielberg. David Lynch’s psychosexual thriller Blue Velvet (1986) has long been etched into his brain. He has always loved film—maybe more than art, he admits—but he has never had the urge to build a more linear narrative.
“Whatever story that a still photograph can produce is limited,” he said. “Rather than seeing that as a liability, I’ve always seen it as something that’s potentially powerful in a photograph. Maybe that’s why you could return over and over again to a photograph and it will never reveal its true mystery.”
Though he has refined his imagined world over the years, each occupant of it is distinctly his own. Like his day-to-day, he doesn’t steer too far from the course. But that’s in part because he sees his place in the broader canon, among painters like
Edward Hopper
, photographers like Arbus, and writers like Joyce Carol Oates.
“I feel like I’m part of a continuity of artists that seem to explore the intersection between everyday life and theatricality,” he said.
That continuity has become circular within visual culture, with Crewdson inspired by cinematographers and, in turn, cinematographers tapping his work. The German mind-bending time-travel saga Dark was reportedly influenced by his photographs, while its fellow Netflix drama Ozark, set in the titular rural region, is also decidedly Crewdsonian. 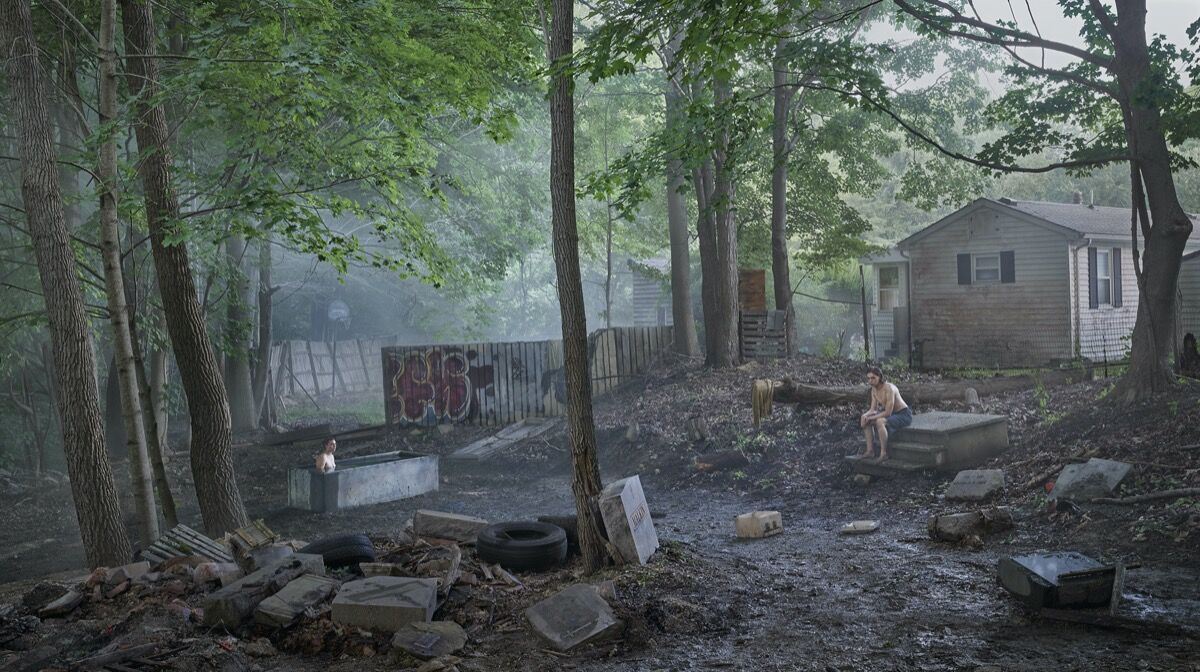 In both shows, the characters confront the darkest sides of themselves, but hope for some sort of redemption. That search for balance underpins Crewdson’s practice.
“Why do it otherwise?” he asked. “Particularly in moments of crisis, I go to art to try to establish some sense of order in the world, [to] filter the chaos into some kind of stabilizing form.”
Crewdson continued, “In good times, my life feels very chaotic, so I always look to art for not only clarity, but refuge. I look at art for complications: beauty and sadness or artifice and nature or some sense of anxiety and something calming.…If it was just purely bleak, I wouldn’t want to pursue it.”
Crewdson also doesn’t deviate too far from his original vision for a more intrinsic reason, a sense of self shaped by formative influences. He believes those early encounters set in motion the rituals we repeat for the rest of our lives.
“I’ve said many times that [your] story is defined when you’re coming of age…the music and the movies and the books you loved,” he said. “And then you spend the rest of your life circulating the same things.”
He continued, “You don’t really go too far. In a certain way, your position has been set, and the challenge is to push forward with a story and try to reinvent it as best you know how. But at the core of it, you can’t get away from yourself. So you just continue the circle around these preoccupations, these obsessions…and every time you make a picture, you get one step closer to knowing what it is.”
Jacqui Palumbo is a contributing writer for Artsy Editorial.
Related Stories