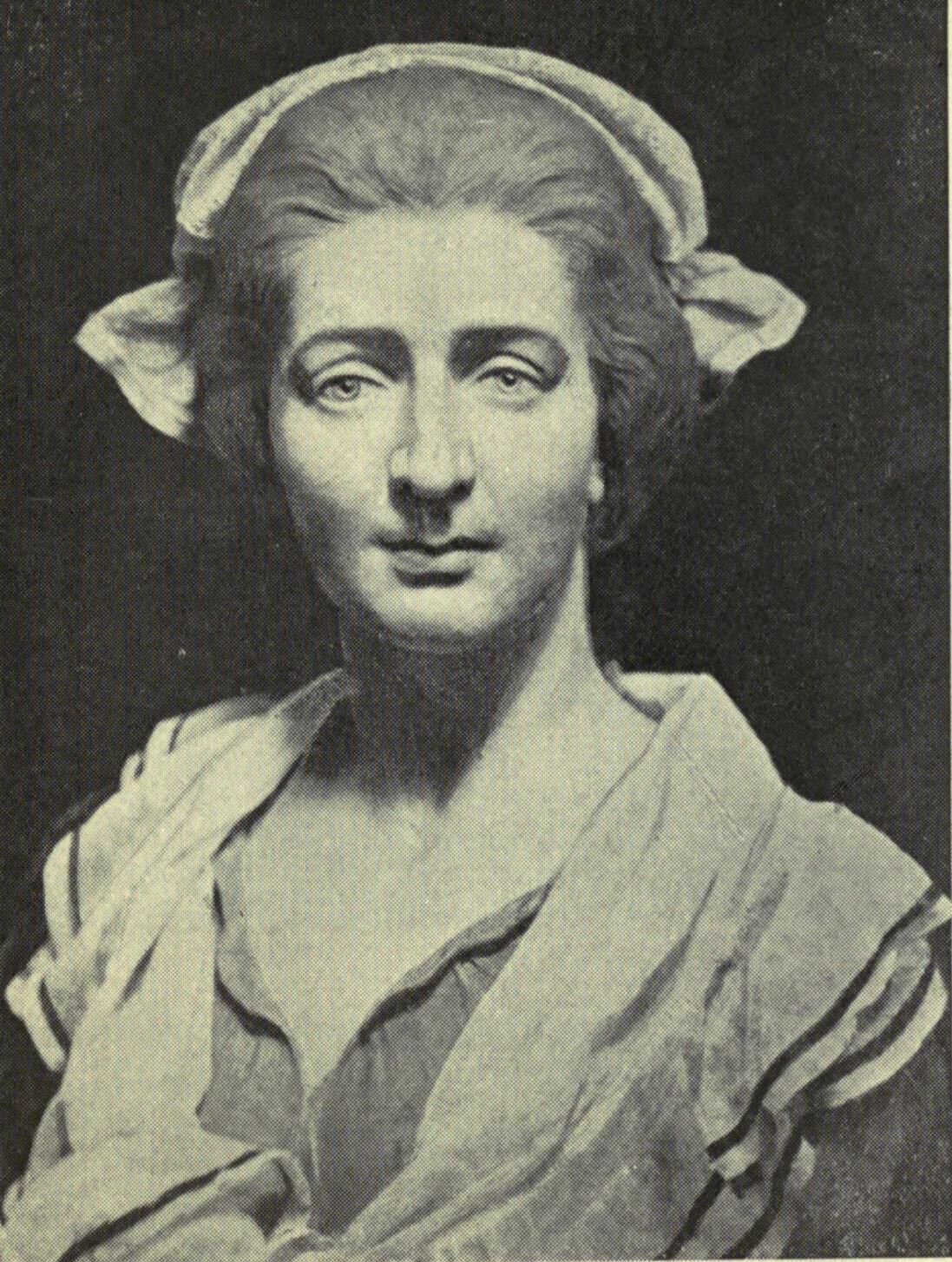 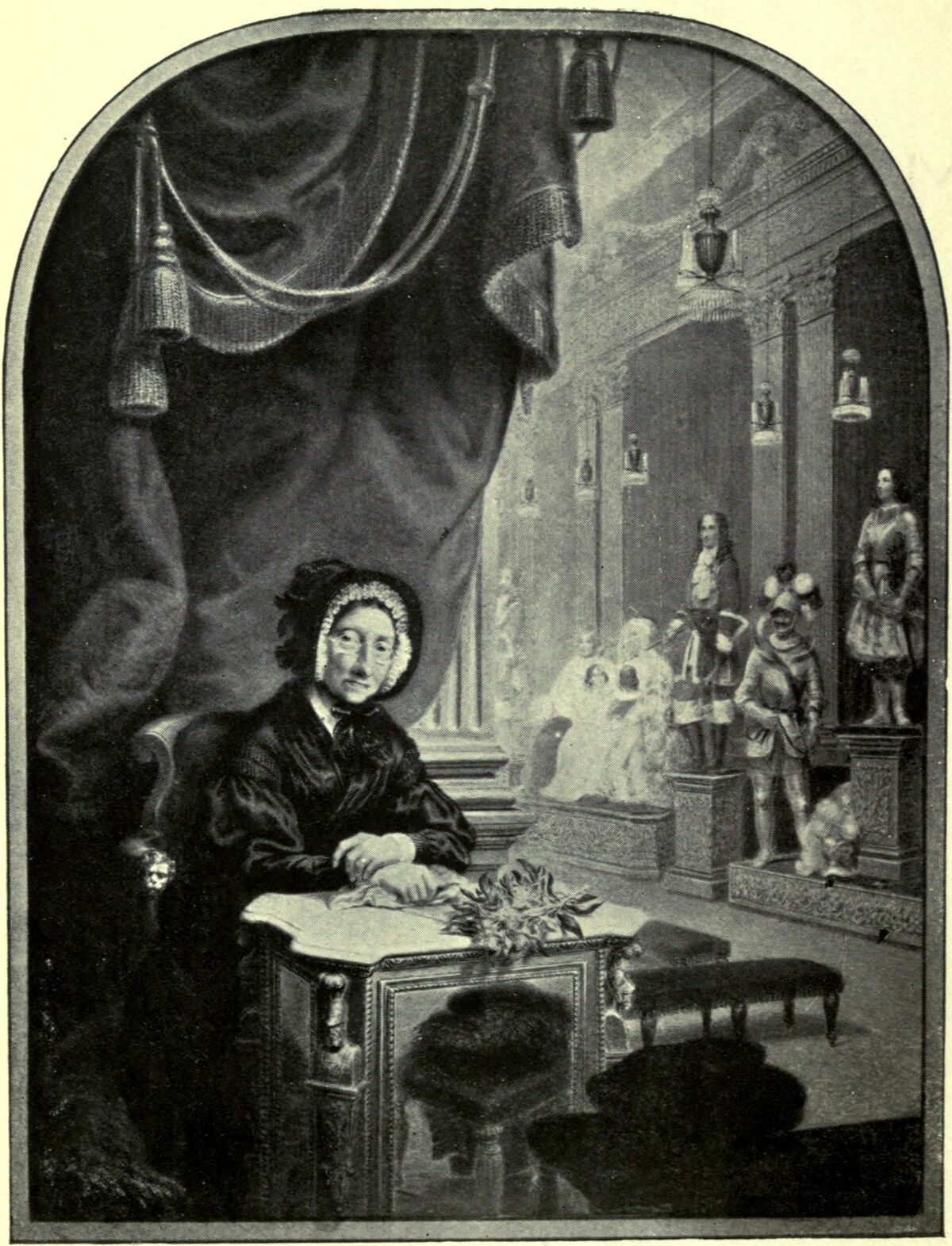 Madame Tussaud at the age of 85, via John Theodore Tussaud, "The Romance of Madame Tussaud", 1921. Image via Wikimedia Commons.

For most Parisians, a stroll through the ruins of the Bastille in the summer of 1789 was the ultimate exercise in free will: the chance to personally trample over the regime’s most notorious symbol of oppression. Yet for Madame Tussaud—then the 27-year-old protégée of famed waxmaker Philippe Curtius—the experience was drenched in destiny.
“Whilst descending the narrow stairs, her foot slipped,” recounts her earliest and most breathless biographer, “when she was saved by [Maximilien] Robespierre.” As it turned out, this would rank among her more pleasant encounters with the firebrand. “How little did Madame Tussaud then think,” the passage continues, “that she should, in a few years after, have his severed head in her lap in order to take a cast from it after his execution.”
Like Tussaud’s apocryphal tour of the Bastille, it is nearly impossible to separate the French waxmaker’s life and lore. A baptismal record places her birth in Strasbourg, France, on December 7, 1761. In a grisly portent of Tussaud’s future associations, her absent father came from a long line of public executioners dating back to the 15th century. Her mother was a housekeeper for Curtius—then a resident of Berne, Switzerland, and a doctor by training—fueling suspicion among scholars that Curtius and Tussaud’s mother may have been siblings or secret lovers.
Whether he was Tussaud’s uncle, father, or simply a benevolent physician, Curtius soon assumed the role of her guardian and artistic mentor. After impressing the visiting Prince de Conti, a cousin of Louis XV, with a small museum of anatomical wax miniatures produced as part of his medical practice, he accepted patronage to pursue wax modeling as his primary vocation in Paris. Tussaud and her mother joined him shortly thereafter. 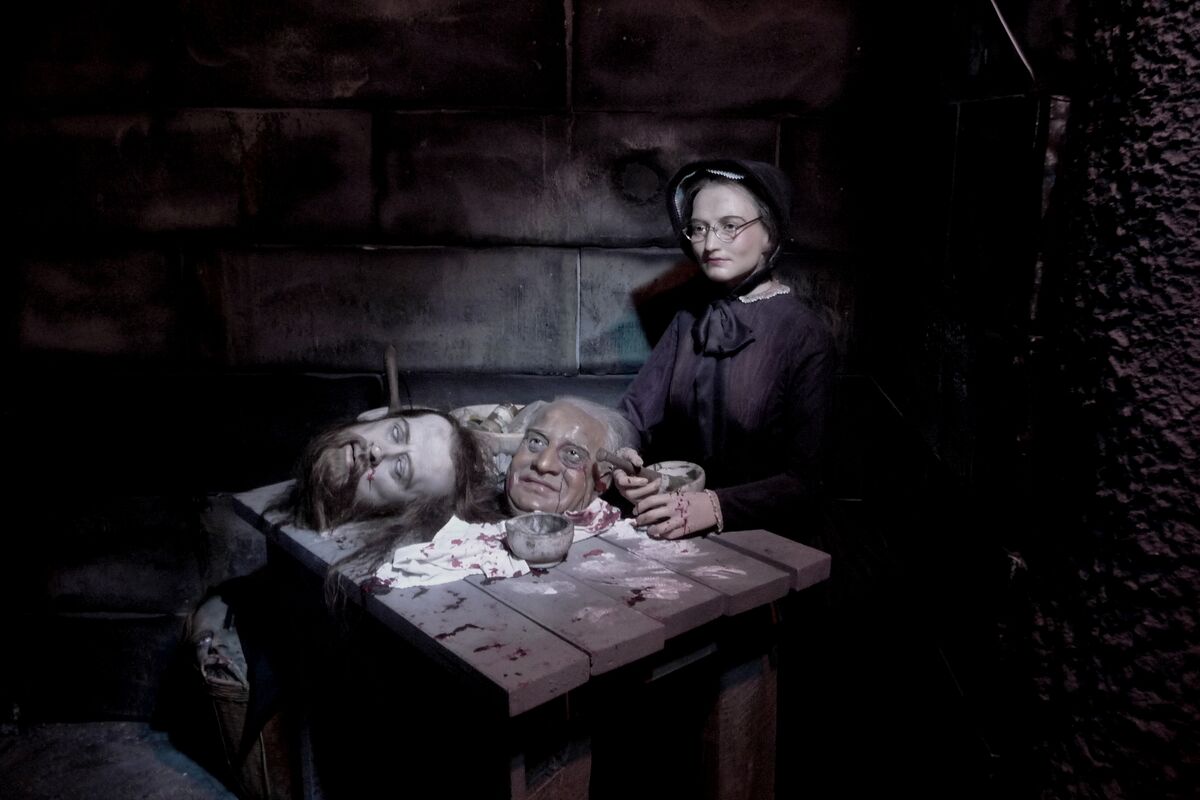 Curtius’s move was well-timed. Though wax modeling had been an established art form for centuries—commonly used for religious effigies, as well as the teaching of human anatomy—it was only in the 18th century that waxworks began to emerge as a source of popular entertainment for paying customers. As an entrepreneur ahead of his time, Curtius intuitively grasped that wax modeling offered a unique way to stage current events for a novelty-hungry populace. It also offered customers a titillating (if illusory) brush with celebrity. On both counts he was wildly successful. “The wax models are so close to nature you could take them for real,” gushed one contemporary reviewer. “The display is constantly changed in response to striking and noteworthy events.”
By the early 1770s, Curtius had set up permanent shop at 20 Boulevard du Temple—the street with the highest concentration of theaters in the city—where he plied visitors with wax renderings of the most notorious statesmen and criminals alike. The building doubled as Curtius’s workshop and home, affording Tussaud immediate access to both the craft of wax modeling and the most eclectic spectacles Paris had to offer. In the words of one visitor to the area, “There are chairs set up for those who want to watch and for those who want to be watched—cafés fitted up with an orchestra and French and Italian singers; pastry cooks, restaurant-keepers, marionettes, acrobats, giants, dwarfs, ferocious beasts, sea monsters, wax figures, automatons, [and] ventriloquists.” Tussaud absorbed it all. By the time Curtius died in 1794, bequeathing his by-now iconic collections and workshop to Tussaud, she had spent decades mastering both the art and accounts of the waxworks. 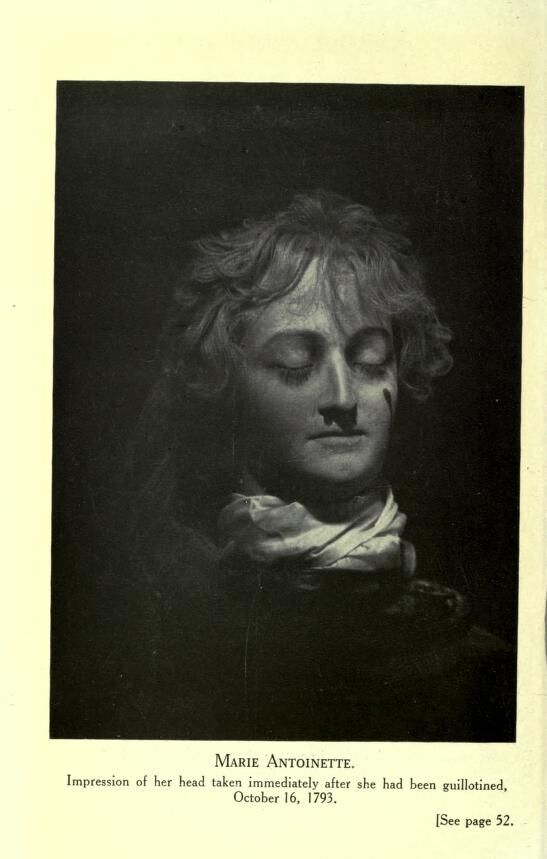 Image via John Theodore Tussaud, "The Romance of Madame Tussaud", 1921. 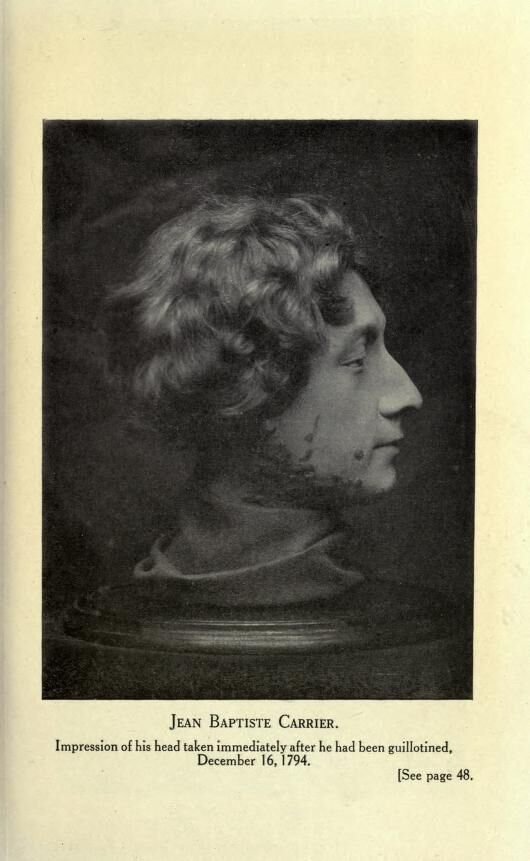 Image via John Theodore Tussaud, "The Romance of Madame Tussaud", 1921.

Advertisement
Tussaud’s career assumed a decidedly more morbid character than her guardian’s, however. Whereas Curtius had made a name for himself largely modeling live figures—a process that required him to insert straws in his subject’s nose so they could breathe as he plastered their face—the most sought-after visages of Tussaud’s day were those that had most recently fallen beneath the blade of the guillotine. As it turned out, the plastering process worked just as well, if not better, for modeling the recently deceased. As Pamela Pilbeam, professor and author of the 2003 book Madame Tussaud and the History of Waxworks, points out, the straws “were not needed [for] someone who had died.”
Though Tussaud would forever claim she was forced by the National Assembly to model the beheaded busts of Robespierre, Jean-Paul Marat, Marie Antoinette, and Louis XVI as a brutal chronicle of the Revolution, her motivation was likely financial. There are credible rumors that Tussaud may even have had an under-the-table arrangement with the public executioner Charles-Henri Sanson, who—for a small fee—would provide Tussaud with the severed heads of the most newsworthy victims to quickly model before their burial.
Nonetheless, as the Revolution careened into the Reign of Terror, Tussaud found herself increasingly unable to compete with the daily gore and depravity of Parisian life. “The theatre of the guillotine destroyed her business,” Pilbeam told Artsy. “It was free and real.” On the Champs-Elysées, toy guillotines were hawked as souvenirs; women sported gold and silver renderings of the deadly contraption as pins, brooches, combs, and earrings. Such was the fervor of the moment that one restaurant with a view of the city’s flagship guillotine printed the names of each day’s victims on their menus.
So in 1802, Tussaud—40 years old, with funds running low—set out for the United Kingdom. The country’s voracious appetite for tales of the Revolution (and later Napoleon) would provide her livelihood forever after. Tussaud’s husband, a profligate debtor and gambling addict, assumed full control of the Boulevard du Temple waxworks. The business floundered, then failed. Tussaud never returned to France again. 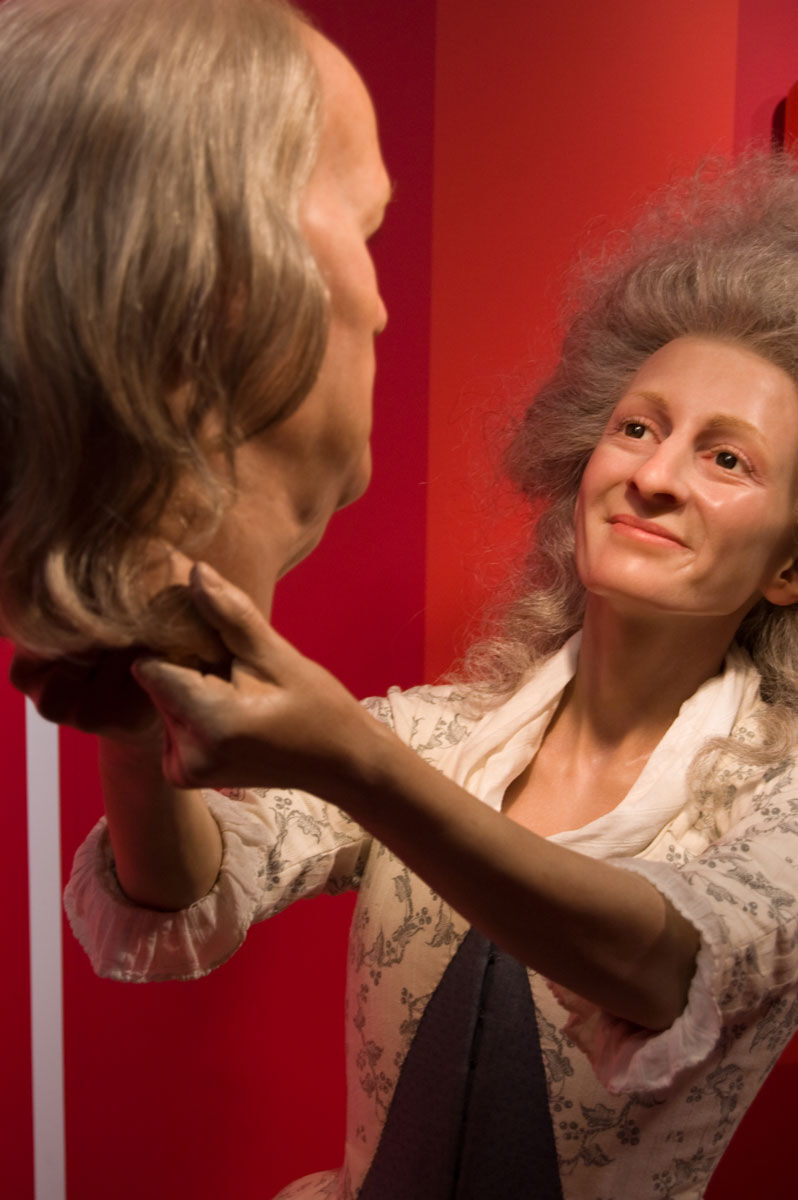 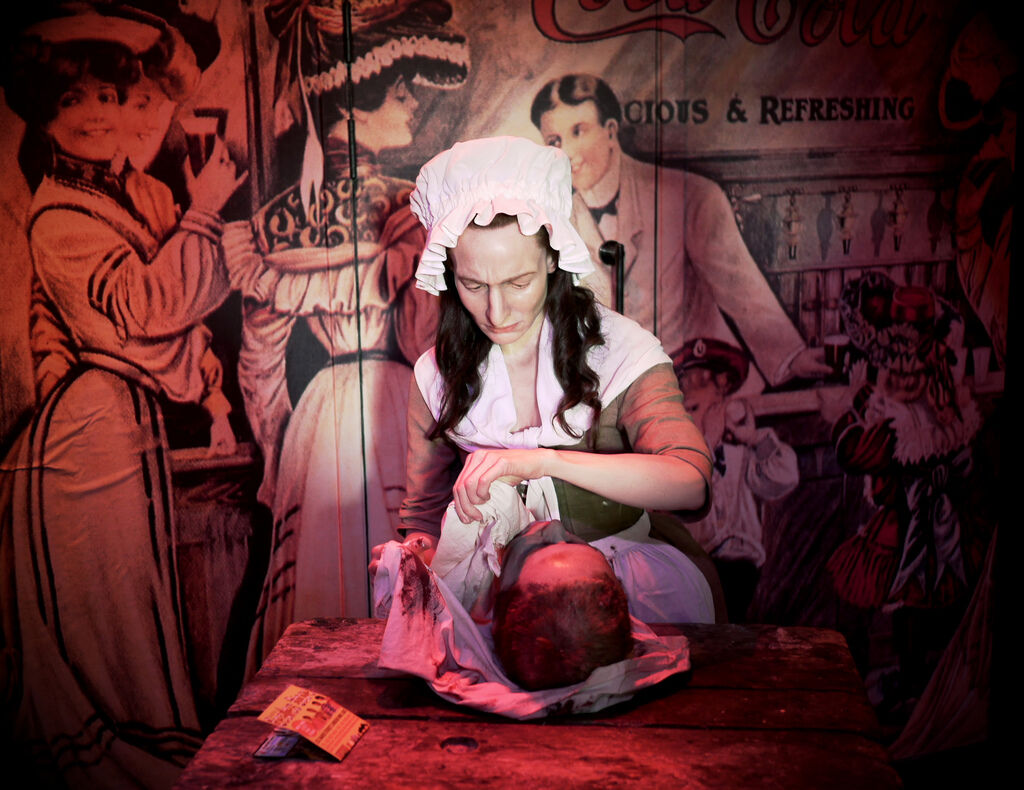 As in Paris, Tussaud arrived in Great Britain to find a burgeoning middle class willing to pay for the chance to view—and touch—the most consequential figures of the time. As there would be no daily newspapers published outside of London until 1855, Tussaud spent her first 33 years abroad traveling the country’s backroads. Along the way, she would furnish customers with ever-more-fantastical anecdotes about her personal familiarity with the subjects of her exhibition: Voltaire was a frequent houseguest who remarked “what a pretty dark-eyed girl she was”; she considered Benjamin Franklin “an agreeable companion…with particularly fine legs”; the Comte de Provence (later Louis XVIII) made a pass at her on a staircase at Versailles, prompting Tussaud to “give him a slap on the face.”
At best, this was artful hyperbole; at worst, outright fiction. But the British lapped it up. While Tussaud’s craftsmanship was uncanny—and celebrated as such by the British press—what separated her from competitors was the supposed intimacy she shared with her subjects, which lent her exhibition an unparalleled veneer of drama and prestige.
In 1835, Tussaud finally put down permanent roots on London’s Baker Street, the fulcrum of today’s sprawling wax empire. By the time of her death in 1850, it had become, according to Pilbeam, “the most successful tourist venue in the country.”
Yet as for the veracity of Tussaud’s revolutionary origins—not to mention her fateful encounter with Robespierre in the rubble of the Bastille—Pilbeam is as coy as her subject. “A good tale deserves to survive,” she mused, “however unlikely.”
Ian Shank
Related Stories

The Romantic, Macabre History of the Anatomical Venus 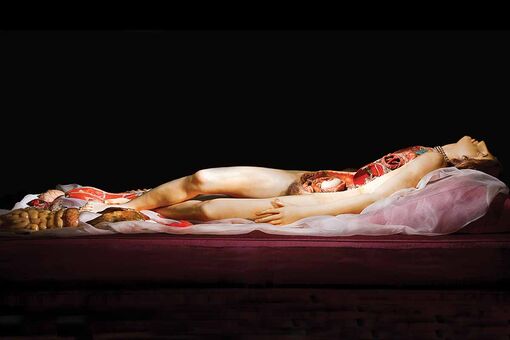 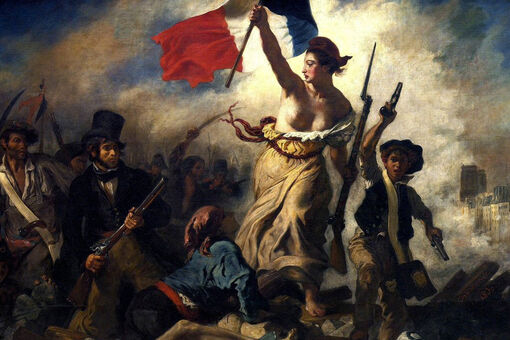 How France’s Violent Revolutions Impacted Some of Its Most Important Artists
Isaac Kaplan
Jul 13, 2016