The Grueling, Hyper-Competitive Exams That Decide the Futures of Chinese Art Students 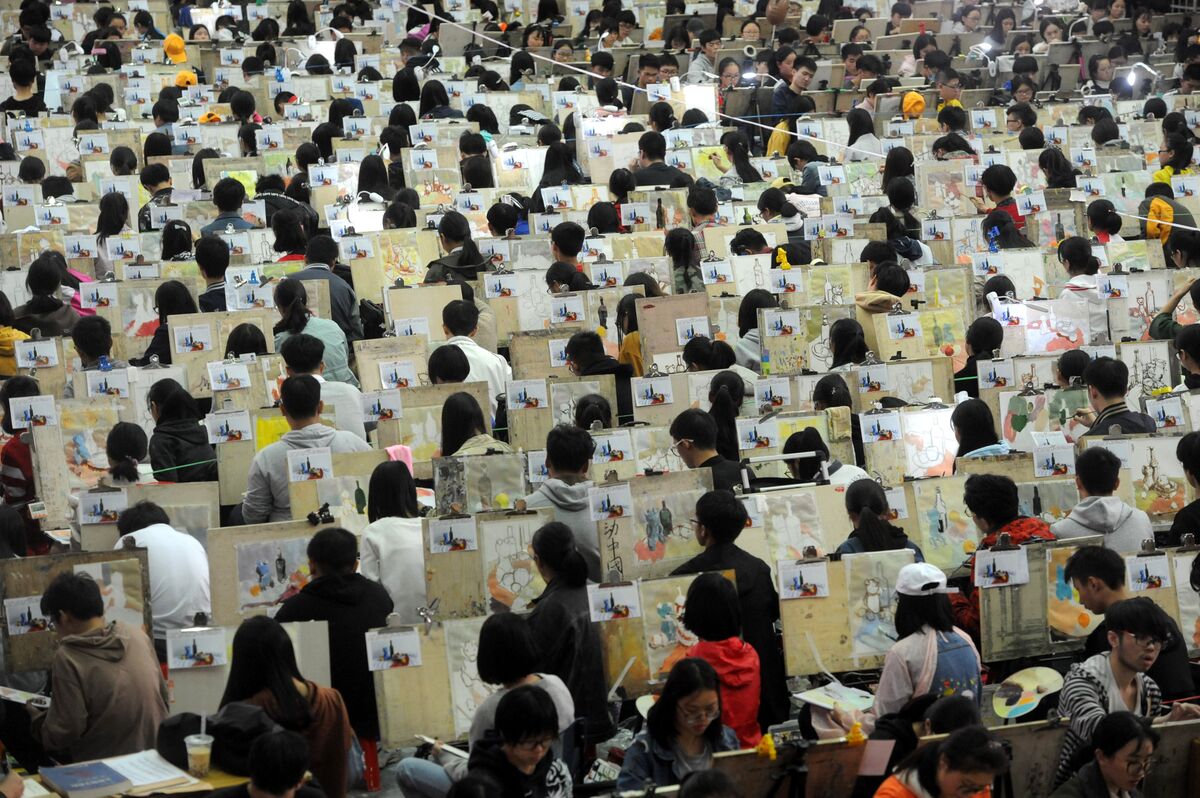 Nearly 7,000 students take part in the college entrance exam for art at Shungeng International Convention and Exhibition Center on February 16, 2016 in Jinan, China. Photo by VCG/VCG via Getty Images.

Very few would question whether applying to university is a stressful process. For many Chinese students, that process is taken to a whole new level—and applying to art school is no exception.
Every year, thousands of Chinese art students travel to the nearest major city for practical exams, part of the application process to get into university art programs. They sit alongside their peers in sprawling hotel conference rooms or athletic facilities, with pencils and paints in tow. Over the course of a full day, or more, they must complete a specified set of art assignments, which will determine their future academic and career opportunities. And the odds aren’t in their favor.
A report by Daxue Consulting in Hong Kong discovered that the China Academy of Art receives around 80,000 applicants per year, and enrolls just 1,600. The Central Academy of Fine Arts in Beijing averages over 40,000 applicants per year, 13,000 of whom are invited to sit for their exam; the school only accepts between 700 and 800 national students each year. Given the numbers, it’s no wonder that schools go to relatively extreme measures to ensure that judges of the exam cannot be swayed or bribed. In the end, it’s up to the students to ace this practical art exam. But what does that even entail?
The Central Academy of Fine Arts administers its exams each year at five test sites—Beijing, Qingdao, Zhengzhou, Chengdu, and Shenzhen. Students come prepared with art materials that are listed prior to the exam, based on whichever degree they’re applying for. Those pursuing a career in design or architecture, for example, have a full day’s worth of testing ahead of them. Fine arts students sit two days of exams—with six hours for drawing, three hours for color theory, and a final three for sketching.
“It’s an unforgettable experience and I don’t want to participate in it again,” said Yu Lilong, a graduate student who studies creative product design at the China Academy of Art in Hangzhou. “The standards are very professional, and it’s incredibly hard. When I applied, I had to do a charcoal drawing of a man’s face, a color still-life painting of flowers and fruits, and a sketch.”
The tests do not cater to any individual styles, nor do they necessarily work in favor of students who want to pursue unconventional approaches to artmaking. In a given exam, for instance, all students will draw the same still life, from a photograph or a setup that sits in the front of the room. In another, students may be given the description of a rare animal and are then asked to draw it, based on the information they received. While some prompts ask that you showcase your technical skills, others are looking for creative expression and individuality—but a lot of the actual scoring depends on the judges.
The China Central Academy of Fine Arts selects five to eleven judges each year ahead of its exams for its three art programs. Prior to the exam, the judges are sent to a secret location in an undisclosed Beijing hotel. Upon arrival, they forfeit phones, laptops, and all tools for external communication, which won’t be returned until the judging is complete.
Once the exams are finished at the five testing sites, representatives from the university collect the applicants’ artworks and attach a border to each to hide any signatures or markings that would identify the artist, and assign them a number. The artworks are then put into suitcases and entrusted to one or two people per site, flown to Beijing, and delivered to the judges in their hotel. 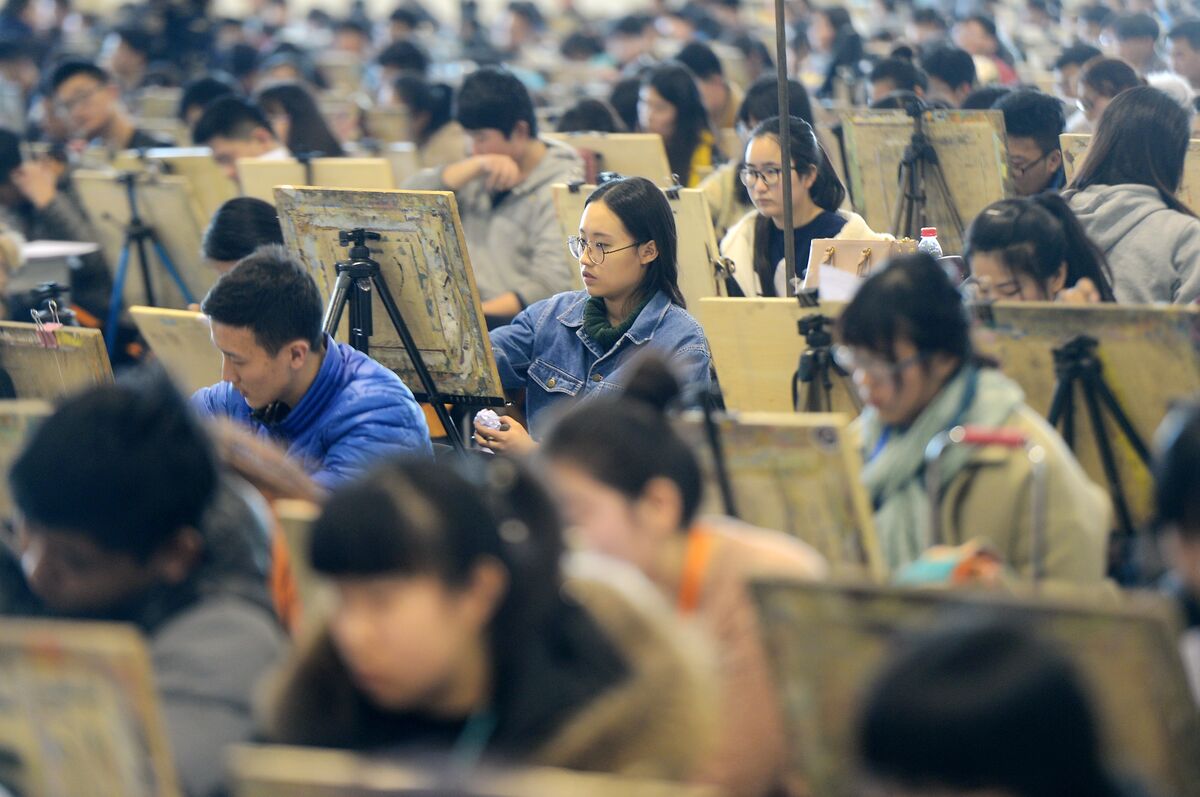 Nearly 7,000 students take part in the college entrance exam for art at Shungeng International Convention and Exhibition Center on February 16, 2016 in Jinan, China. Photo by VCG/VCG via Getty Images.

“The scores are subjective to some degree,” Xu Jia, director of the international office for the Central Academy of Fine Arts, told Artsy. “Each teacher gives one score that incorporates color, shading, etc., but a score can be changed, say two or three times, to establish whether it should be a higher or lower mark.” Scoring takes three to four days.
Afterwards, the scores are ranked in numerical order, and the first thousand or so are invited to take another exam, the gaokao, or the National Higher Education Entrance Examination.
The gaokao is similar in format, and serves as the original model for the initial art school examinations. While it’s used essentially as a pass-fail determination for students that have made it through the first round, the gaokao is even more painstaking. It takes place over two days and lasts about nine hours. Individuals that fail are removed from the running, and of those who pass, offers are only issued to the artists who made the top-scoring artworks.
The university also accepts about 300 international students every year, all of whom undergo a very different admissions process, which is more similar to the procedures of universities in the U.S. and Europe. Applicants are asked to submit an individual portfolio that will be judged by the professors of the department they’re applying to.
“You need to think twice when you want to be an art student, because you need to pay the price, and that’s not just the costly tuition fees,” Yu told Artsy. “Some people think of it as a shortcut to a degree because it’s less dependent on academic scores, but with acceptance rates like 4 percent, that’s totally wrong.”
Unsurprisingly, some Chinese art students are choosing to study abroad. The aforementioned Daxue study found that between 2009 and 2014, universities and colleges in the U.K. saw a 158 percent increase in Chinese students studying creative arts, who were paying tuition that was five times as much as they would have paid in China.
While there has been an uptick in creative careers in China, what drives many is the same passion and persistence that motivates students to pursue the arts all over the world. “I do part-time contract and freelance work as an illustrator, but I’m still unsure about how far it can carry me,” Yu said. “It’s hard to subsist in China just relying on the fact that you love something.”
Sarah Forman
Correction: A previous version of this article misspelled the name of a Chinese graduate student, Yu Lilong. It also misstated that the China Academy of Art is in Shanghai—it is in Hangzhou.
Related Stories

7 Tips for Applying to Art School, According to Top Admissions Officers 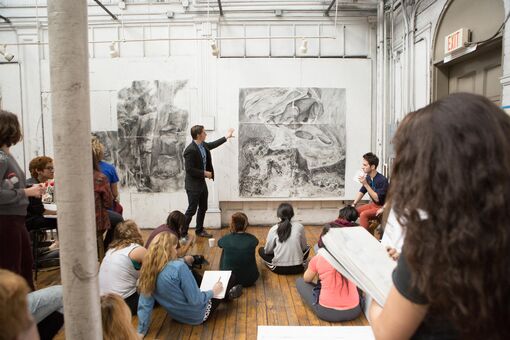