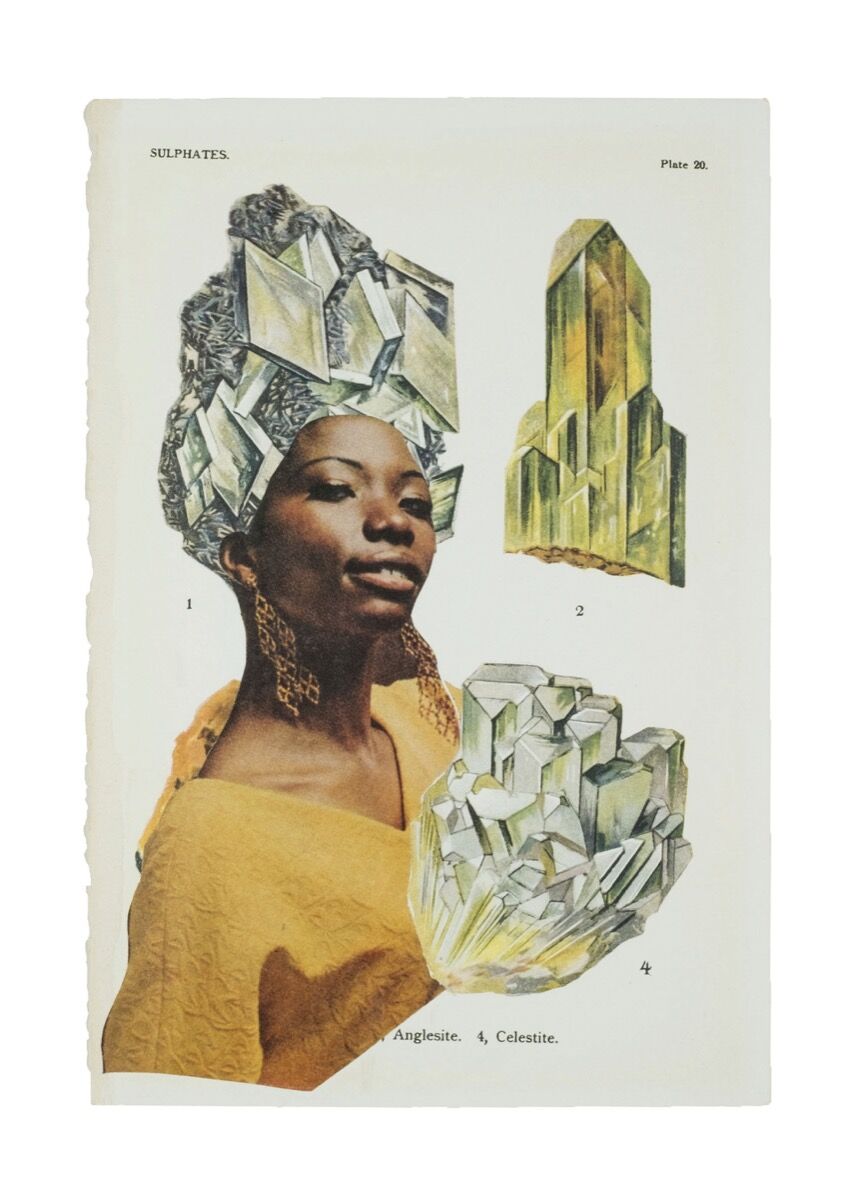 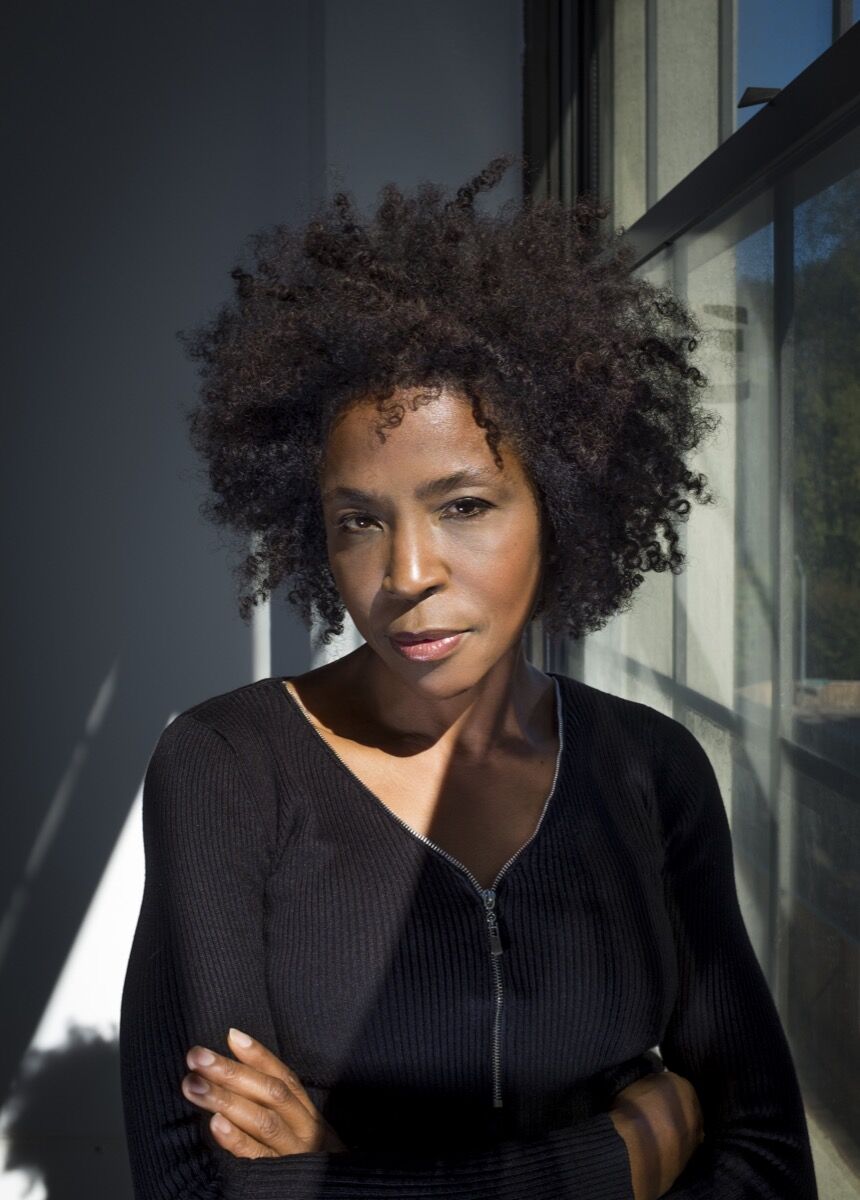 In
Lorna Simpson
’s collages, hair becomes the site of infinite creative possibilities. Atop the heads of African-American men and women, the artist renders inky splotches that pool and trail off into brushy edges. In bright hues (greens, blues, yellows, and pinks), the hairstyles (curls, bouffants, waves, and afros) transform into vivid abstractions.
In this series, hair—that evocative mass of dead cells, instant giveaway of wealth or grift, and most political physical attribute (see: India Arie’s “I Am Not My Hair”; Solange’s “Don’t Touch My Hair”; Phoebe Robinson’s You Can’t Touch My Hair)—adopts a visual language all its own.
Chronicle Books has recently released a volume focused on these works, simply titled Lorna Simpson: Collages. In it, writer and scholar Elizabeth Alexander asserts that the painted hair “has a mind of its own. It is sinuous and cloudy and fully alive. It is forest and ocean, its own emotional weather. Black women’s hair is epistemology, but we cannot always discern its codes.”
Notably, the source images that Simpson paints over are all culled from issues of iconic magazines that celebrate African-American culture: Ebony and Jet (only the former still exists in print). Simpson reclaims mass-produced images by adding her personal flourishes. The characters are no longer models for lifestyle stories, but sites of inspiration, artistic and otherwise. 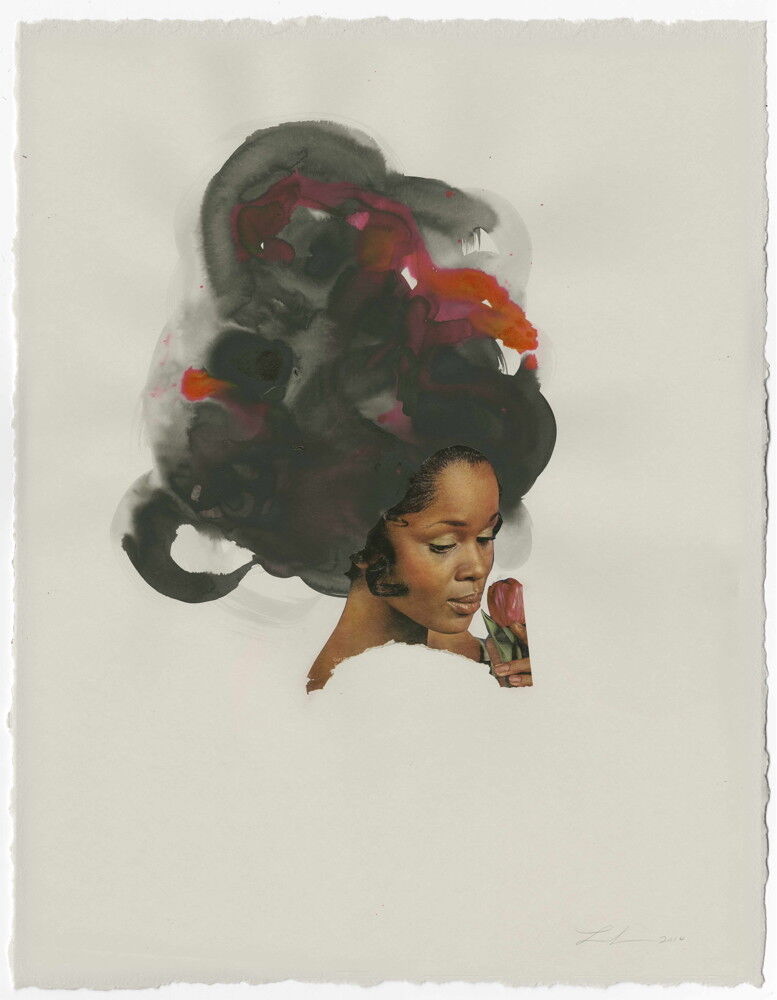 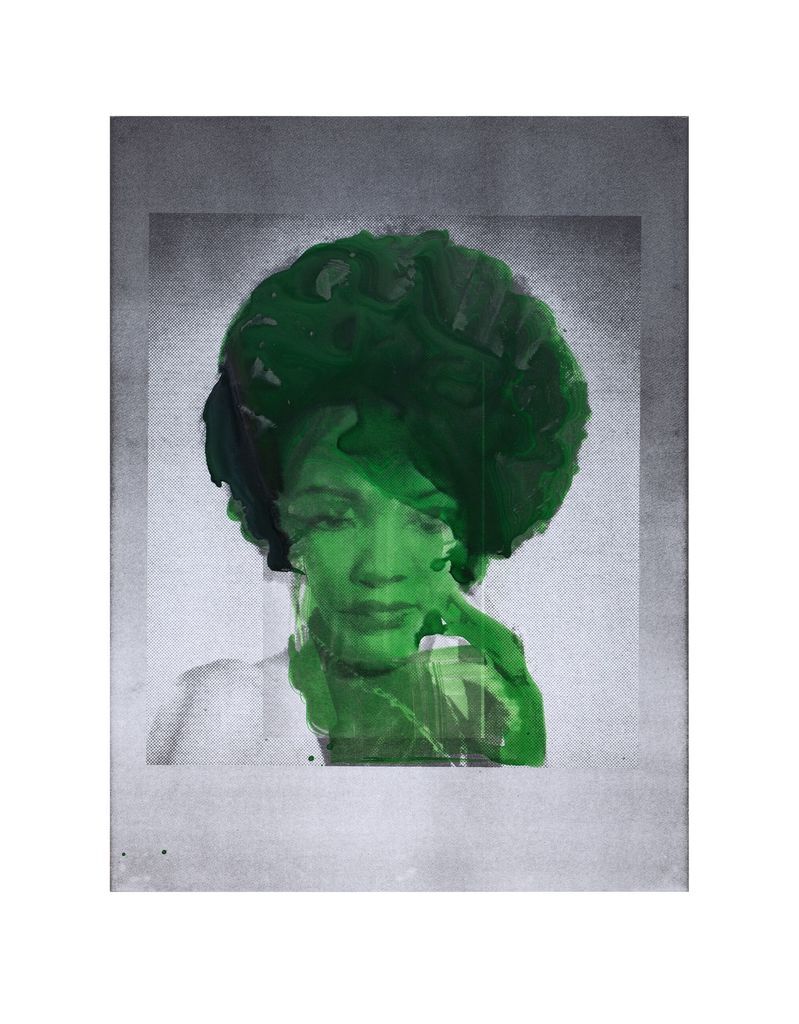 Lorna Simpson
Between blue & yellow, 2020
Hauser & Wirth
Born in Brooklyn in 1960, Simpson graduated from the University of California, San Diego’s MFA program in 1985 and quickly rose to prominence. After photographing street scenes, she turned to posed, studio-based shots that often incorporated text and plainly dressed models with faces either cropped out or turned away from the viewer.
Necklines (1989), a representative work from this era, features three staggered black-and-white photographs of a woman’s neck, beginning at her jagged-edged white garment. Beneath the frames, two black plaques feature words and phrases associated with “neck”: “neck & neck,” “neck-ed,” “neckless,” “necking,” etc. The terms alternately evoke violence, lust, and a particular accent.
Female bodies, often fragmented or obscured, have continued to be integral to Simpson’s work. In 1994, she focused on their hair with Wigs (Portfolio). In 21 lithographs on felt, mounted side-by-side on the wall to resemble a systematic study, she depicted a variety of fake hair pieces. Separated from a body, they become eerie and lifeless: the opposite of the vibrant hair in her collages. 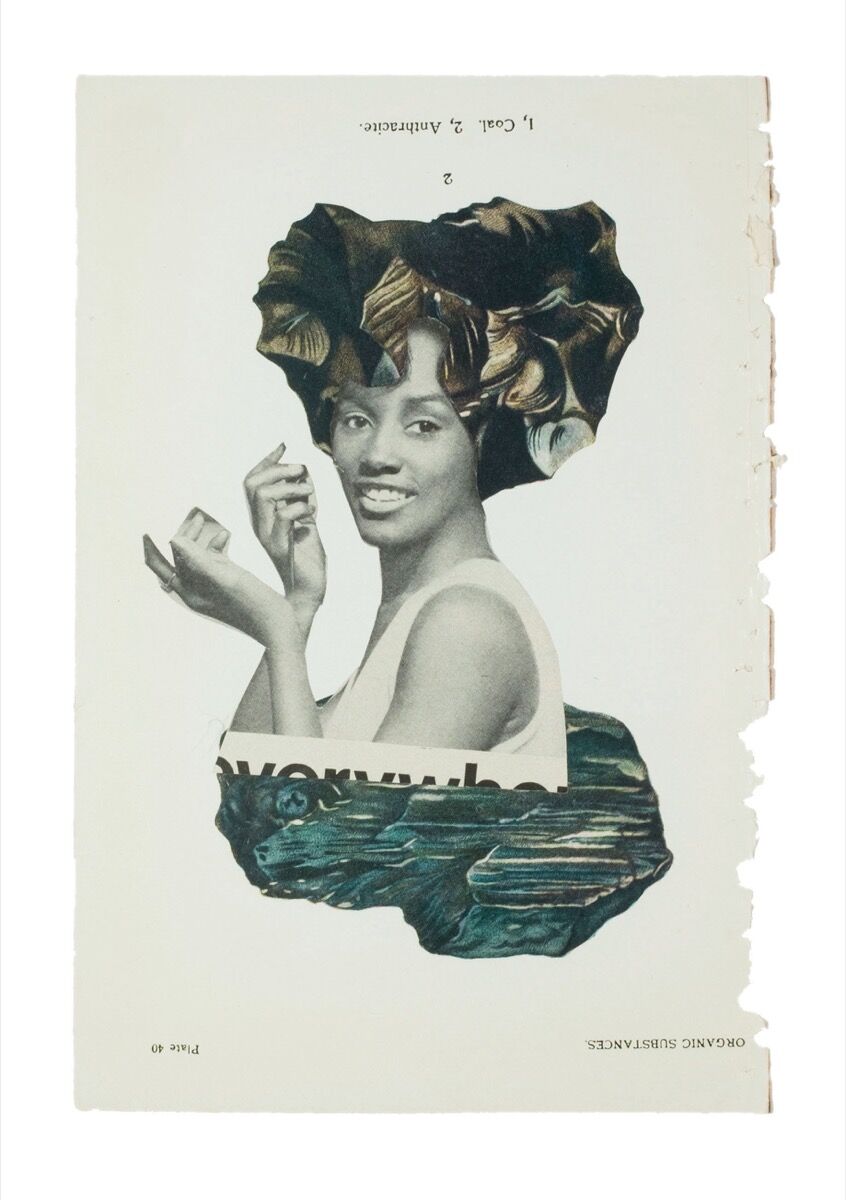 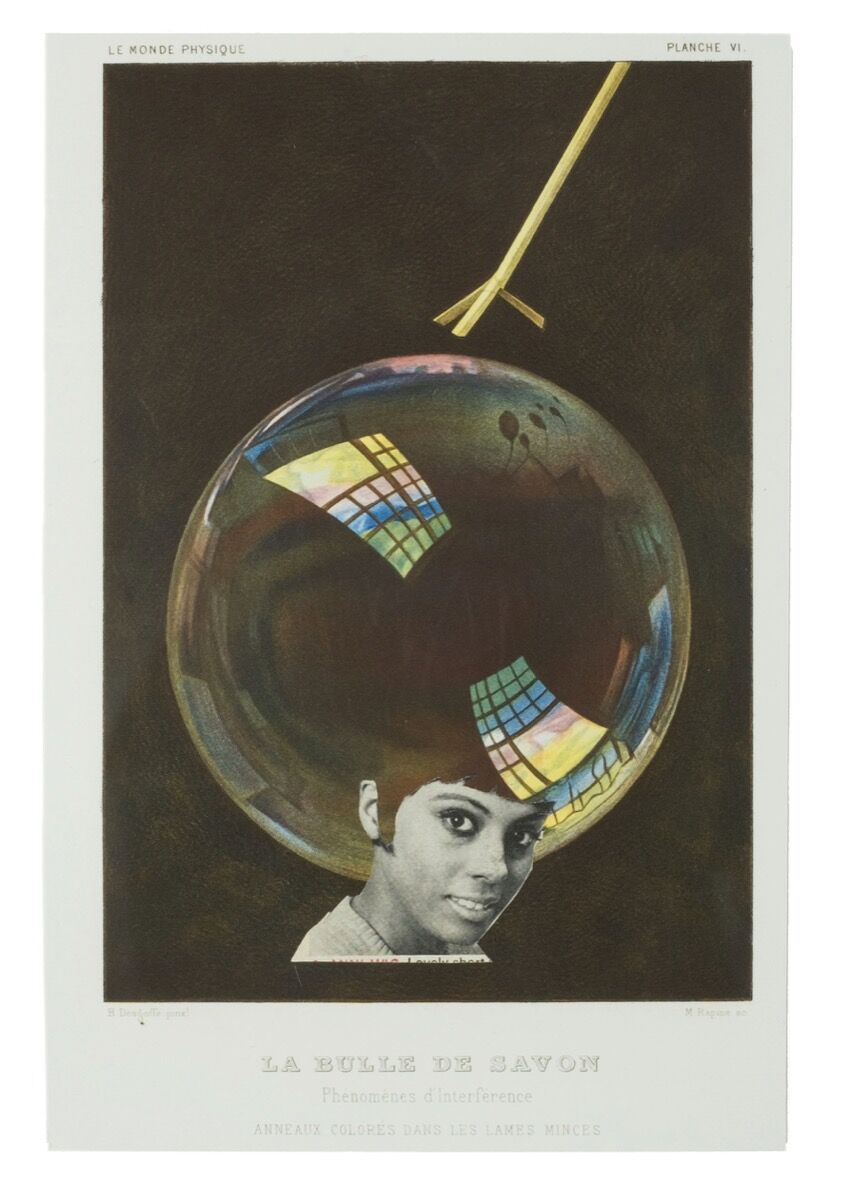 Advertisement
Throughout her career, Simpson has nimbly shifted between performance, painting, photography, drawing, and moving image. A 2011 video, Momentum, features dancers costumed in all gold, from their garments to their body paint to their tinted afro wigs. Hair becomes a unifying element among pirouetting bodies of differing shapes and sizes.
Simpson has previously stated that the work was inspired by her own experiences performing ballet on stage as a child. As with much of her oeuvre, this film connects to an unspecified past. From invoking archival material to creating black-and-white imagery that mimics the spirit of a bygone era, Simpson more or less subtly embeds her art with a sense of history.
Some of Simpson’s collages situate the characters within more cosmic, timeless scenarios. In her “Earth and Sky” series, cut-outs of women’s heads swirl in what appear to be images of the galaxy appropriated from textbooks. The figures seem superhuman, near omnipotent. In other examples from this selection, Simpson merges women’s heads with depictions of gems and minerals. They become earthy, precious, and elemental all at once.
In the final series in the book, “Riunite & Ice,” Simpson’s collages all include the face of the same woman: regal, with glittering earrings and a collar necklace that appears to consist of massive diamonds. Her visage repeats across each work, sometimes topped with a picture of the mountains or the moon, other times with a diagram of another woman’s head or a mechanical contraption. The subject’s identity becomes mutable and expansive, open to innumerable possibilities. 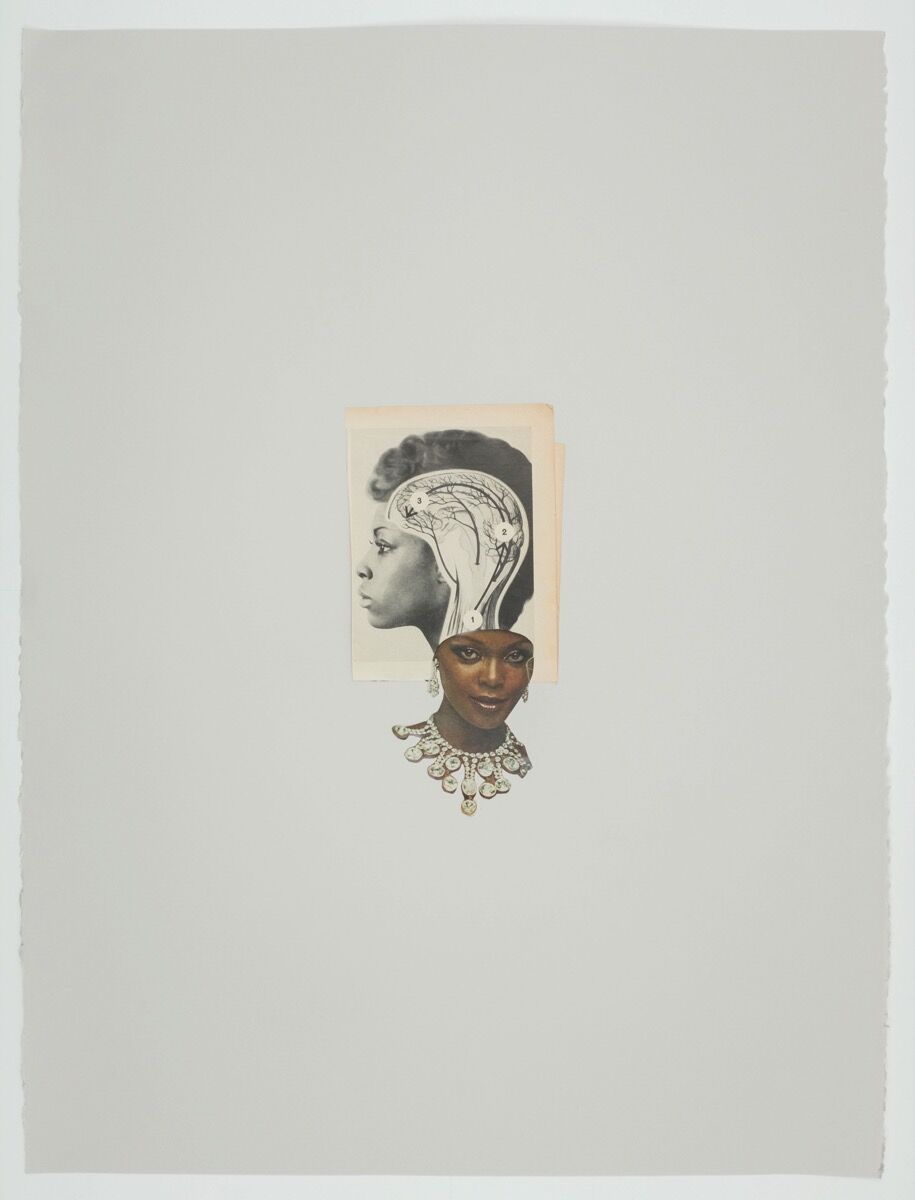 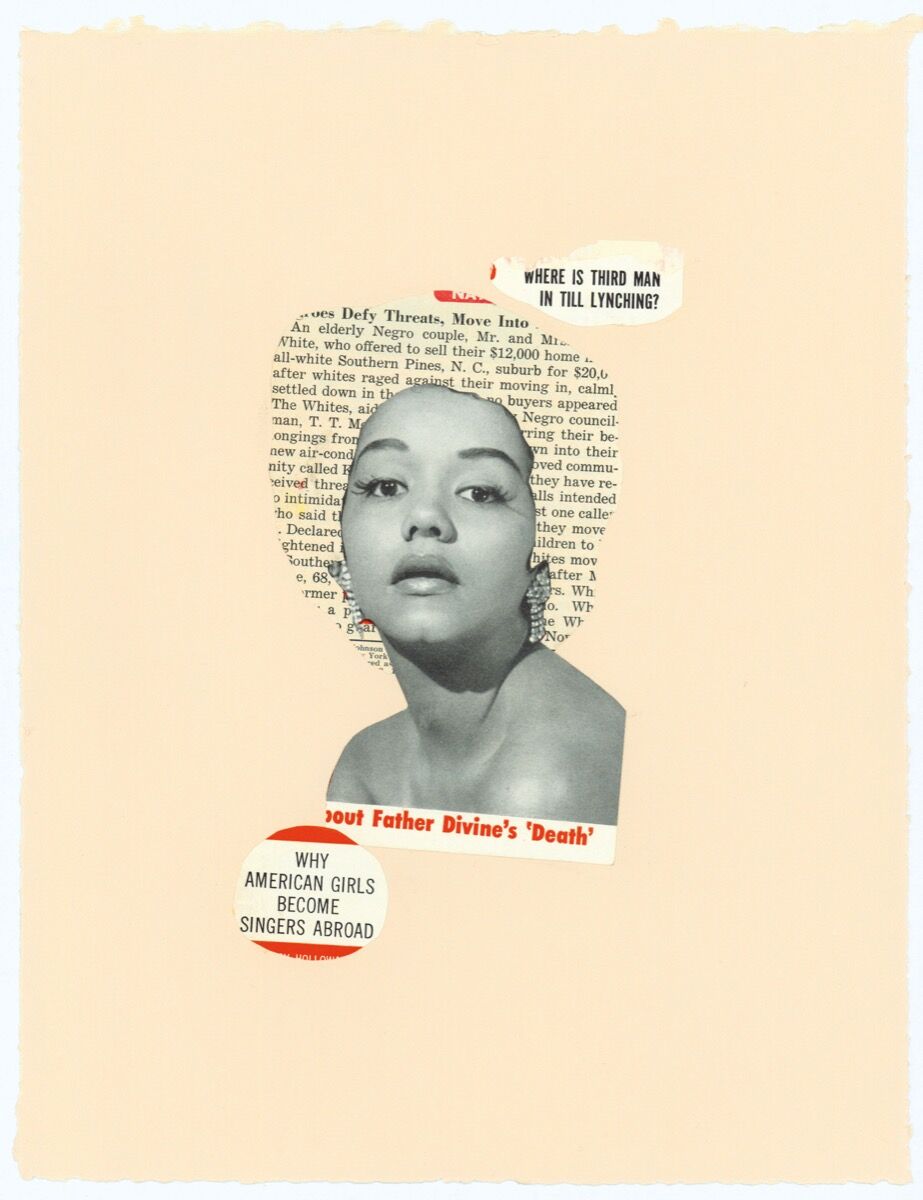 In 2013, the Aspen Art Museum mounted the first-ever exhibition of Simpson’s works on paper. The artist had been in residence at the institution earlier that year, focusing exclusively on that medium. The show included some of the collages collected in the new book, as well as ink renderings of women’s heads (without the cut-out elements).
Aspen Art Museum CEO and director Heidi Zuckerman described the collages Simpson created in Aspen as “fragmented, geometric, and dynamic,” moving away from a previously more organic, softer style. She related the subsequent works to
Dada
, the 20th-century art movement that often incorporated found imagery to make political or societal critiques.
“I thought that there was an intimacy and an immediacy to them,” Zuckerman said about Simpson’s work on paper. “It was as if the gesture was contained and very available to the viewer in this more discrete and refined space.”
Simpson had always been present in her photography and video, Zuckerman noted—yet the technology involved in these media necessarily distanced the artist from her work. In her collages, alternately, she is able to show her bold and confident hand. Simpson’s deftly drawn hairstyles become markers of strong psychological revealing, and deeply personal expression.
Alina Cohen
Related Stories