The Haitian Surrealists That History Forgot 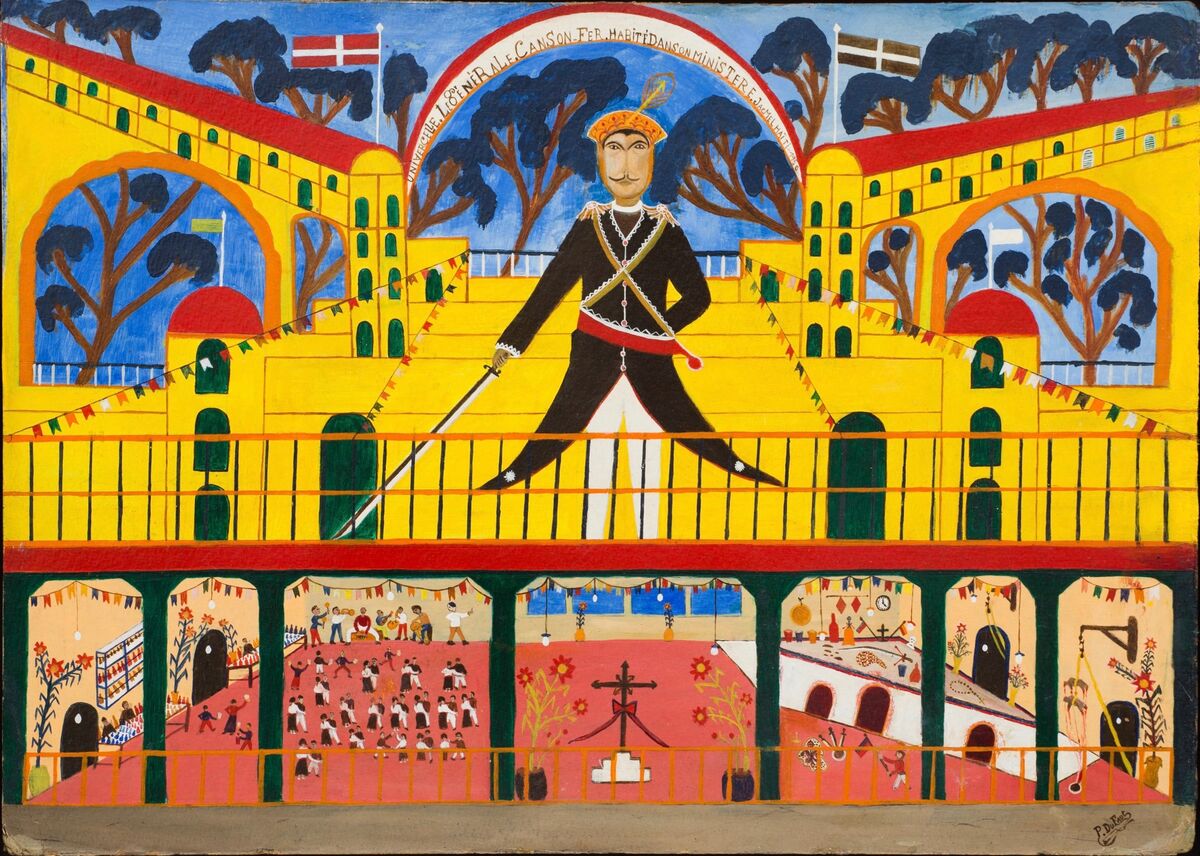 Préfète Duffaut, Le Générale Canson, 1950. Courtesy of The Gallery of Everything.

“It is the destiny of the Haitian people to suffer,” the country’s late, deposed dictator, Jean-Claude “Baby Doc” Duvalier, supposedly once said. Though the statement seems a strange one coming from a negligent, brutal despot whose excesses bled the already impoverished state dry in the 1980s (by one modest estimate, his wedding cost $3 million—about $9 million with inflation), it’s not hard to understand the sentiment behind it.
This extraordinary nation’s modern history reads like a checklist of every crisis imaginable. Once the most profitable colony in the Caribbean, its slave population rose up in rebellion in 1791, successfully ousting their French overlords by 1804 and, in the process, establishing the world’s first black republic. The French did not take their defeat lightly, and while they never reconquered this part of the island of Hispaniola, they did succeed in reducing it to economic ruin through military and political force.
Ever since, Haiti has been plagued by disease, misrule, and natural disasters, all of which have been exacerbated by interference from foreign powers. Yet in spite—or, rather, because of—its horrendous misfortunes, Haiti’s people have remained resilient, responding to their plight by creating a unique culture grounded in fierce national pride. From Kreyòl—the country’s most widely spoken language—to its unique system of belief—in which European Catholic and West African Vodou traditions are observed simultaneously—Haiti has absorbed influences from outside while keeping alive the cultural memory of its origins as a slave colony. Haitian novels, music, and poetry rank among the best in the modern canon. Yet nowhere is Haiti’s legacy of defiant multiculturalism more apparent than in its art of the mid-20th century. 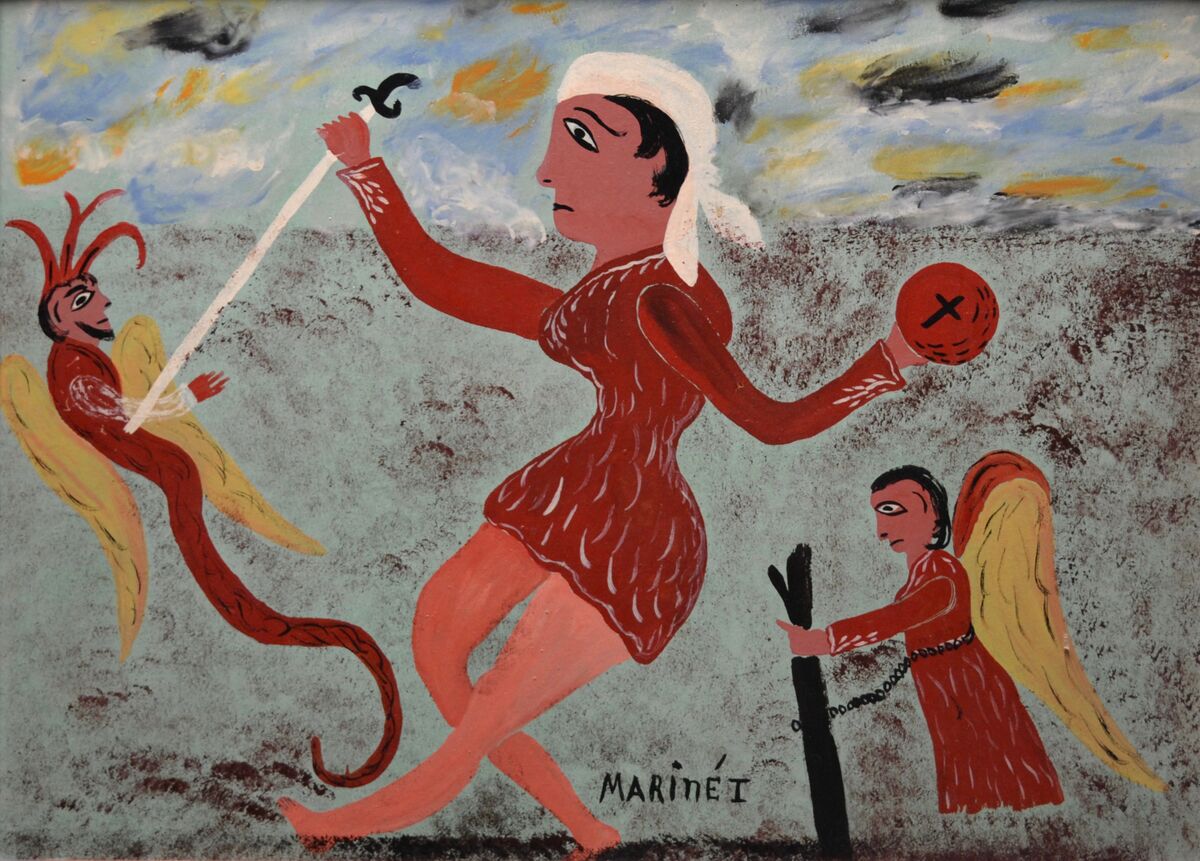 Hector Hyppolite, Marinéte pie chè che (MARinÉ I), c. 1944–46. Courtesy of The Gallery of Everything.

This month, an exhibition dedicated to Haitian artists working between the 1940s and 1960s, “Art + Revolution in Haiti,” will be on view at various locations in London. The Gallery of Everything—an idiosyncratic dealer mounting concurrent presentations at Frieze Masters, the 1-54 Contemporary African Art Fair, and its permanent gallery space in Marylebone—attempts a fresh look at Haitian painting, which has, until recently, been patronizingly dismissed in mainstream art-world discourse as “primitive” or “naïve.” James Brett, the gallery’s founder, is on a one-man mission to salvage the reputation of Haitian artists, including
Philomé Obin
,
Wilson Bigaud
, and—possibly the most important of all—
Hector Hyppolite
, a Vodou mystic widely regarded as the father of modern Haitian art.
As Brett points out, there are few certainties when it comes to Hyppolite’s biography. “He told many contradictory stories about himself,” he said, “and those stories then became myth.” What we do know is that this visionary was born in 1894 into a family of houngan, or Vodou priests. He most likely taught himself to paint, beginning his artistic career decorating houses. Nonetheless, there was nothing remotely unworldly about him: Hyppolite was a smart dresser; an intellectual who saw himself as both a “ladies’ man” (Brett’s words) and a conduit for the spirits—what the adherents of
Surrealism
might have referred to as “the unconscious.” Nevertheless, it was only in the 1940s—when American artist DeWitt Peters established the Centre d’Art, a school for painting in Haiti—that Hyppolite came to international recognition.
Peters was instrumental in galvanizing Haitian painting’s success. He invited Hyppolite to join his art school—“as a participant, rather than a pupil,” Brett insisted. Hyppolite’s mediumistic works are extraordinary. Steeped in the culture of Vodou, they depict spiritual ceremonies, deities, and myths. In addition to brushes and, on occasion, his hands, he used rooster feathers as a painting tool—an eccentric decision made not, as is sometimes assumed, on necessity, but as a symbolic choice: In Vodou ritual, the rooster is an animal of great significance. 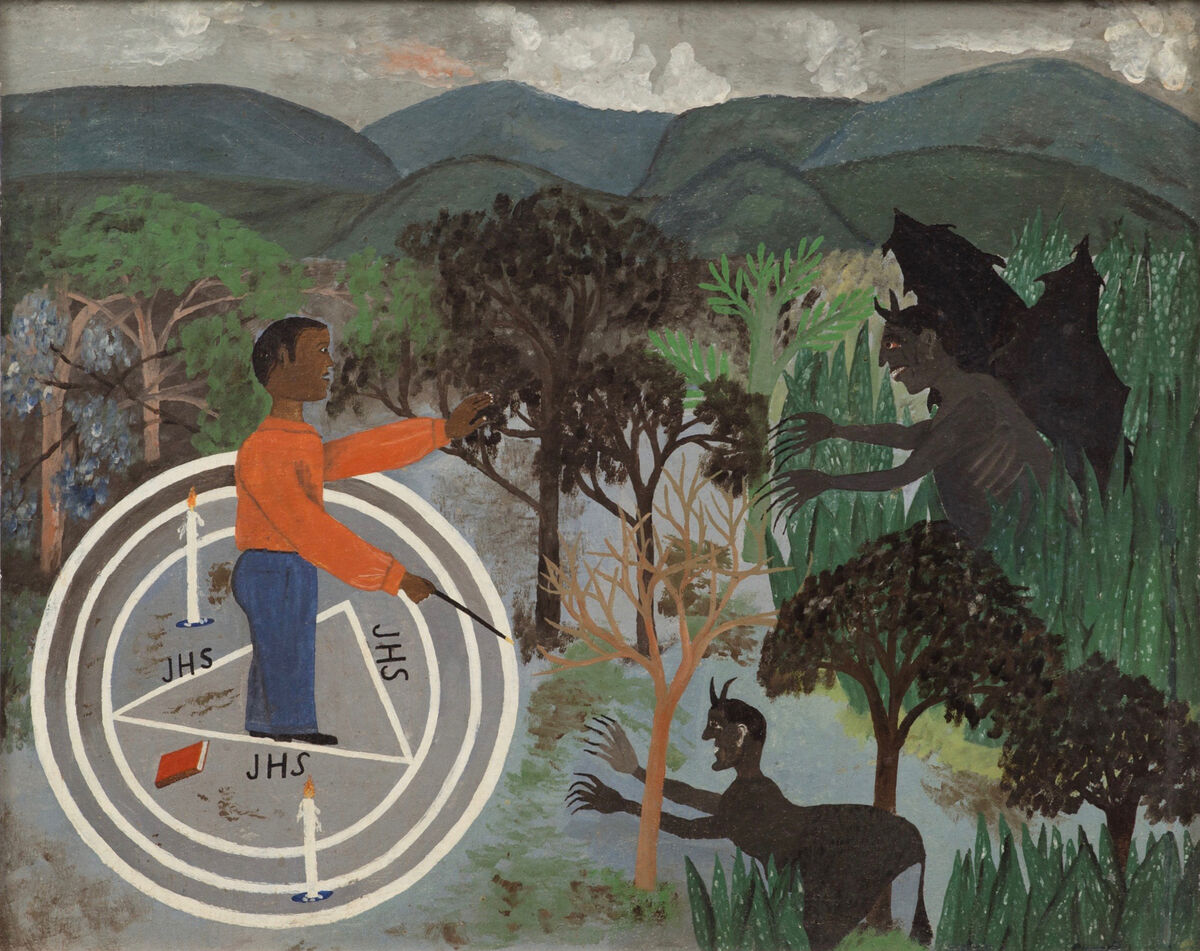 Fernand Pierre, untitled, c. 1947. Courtesy of The Gallery of Everything.

Advertisement
Hyppolite was not the only notable alumnus of the Centre d’Art. Obin, a bookmaker, wrote to Peters begging to be admitted. While most of the painters featured across The Gallery of Everything’s exhibitions are notable for the preponderance of Vodou subjects in their work, Obin concentrated on social topics, not least Haiti’s skin color–based class system. In one painting, he depicts the light-skinned bourgeois of Cap-Haïtien around the turn of the last century: two elegantly dressed people parading down the street in a horse-drawn carriage. Innocuous though the scene appears, Obin presents Haitian society as a mirror image of the European class system that it fought so hard to depose.
“Haiti was a country ruled by elites,” Brett said, “yet the painters of the Centre d’Art were not part of those elites.” This is itself evident. While upper-class Haitians with artistic ambitions went to study in Paris, adopting the styles then fashionable in France, the artists mentored by Peters stuck to emphatically local subject matter, particularly to Vodou—the imagery of which made little distinction between dreams and reality.
This was a major draw to
André Breton
, who visited Haiti in 1945 and immediately acknowledged its art’s parallels with Surrealism. To Breton, these painters—Hyppolite in particular—went far further than his fellow European artists in attempting to throw off bourgeois truisms in order to identify the truth of existence. Vodou spirituality, as Breton saw it, served much the same purpose to the Haitian artists he admired as psychoanalysis did for the likes of
Man Ray
or
Salvador Dalí
. You only need look at a 1947 painting by Minium Cayemitte to understand where he was coming from: It depicts a Catholic preacher dropping his Bible while a jeering crowd of distorted, fantastical figures appear to heckle him out of the picture. It is an extraordinary image, worthy of Surrealist touchstone
James Ensor
at his most unhinged. 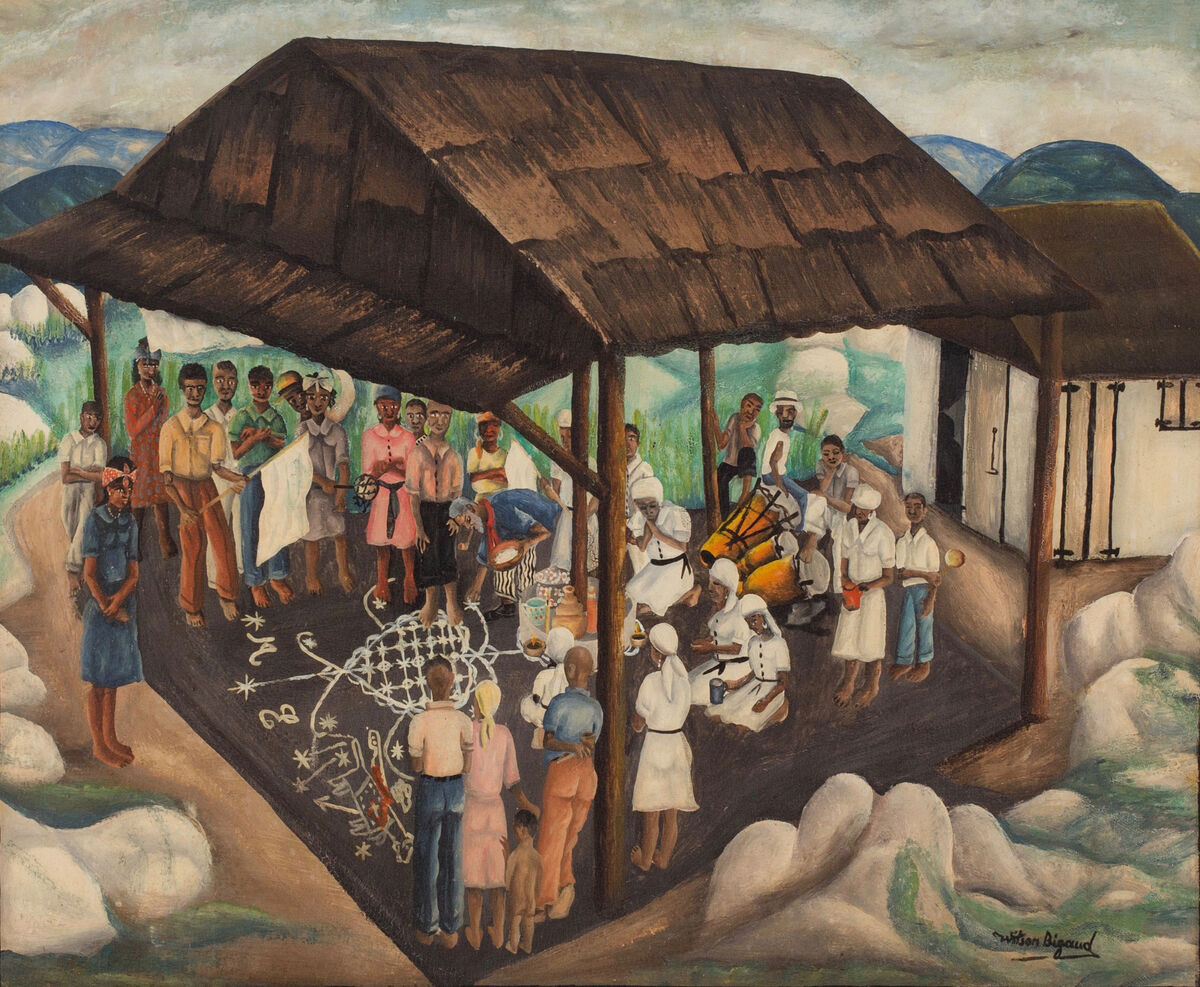 Wilson Bigaud, Cérémonie Erzulie, c. 1946. Courtesy of The Gallery of Everything.

Breton returned to France early, taking seven Hyppolite canvases with him. But he wasn’t the only white tastemaker seduced by Haitian art. The Centre d’Art became a go-to destination for American tourists in the late 1950s and ’60s, and Haitian painting became all the rage with sophisticated New York collectors (including Jackie Kennedy-Onassis). Yet as it increased in popularity, Haitian art began to lose what made it special in the first place. “Haitian painters began creating works that slipped into kitsch,” Brett reflected. “Fair enough: They were trying to satisfy demand. But the paintings lost something.” This, perhaps, is why Haitian art fell from grace so dramatically after the ’60s. The market has never quite recovered.
A reappraisal of this work comes at a moment in time when black art movements are being rediscovered and treated with the seriousness they are due. But regardless of categorization, the work on show at The Gallery of Everything is entirely stunning on its own terms. Most of these images depict aspects of Vodou ritual—sacrifices, vevers (symbolic designs traced on the ground with powder), and the distinctive drums that provide a rhythm for ceremonies. They are packed with unusual, often unsettling details: One scene by
Sénèque Obin
(Philomé’s brother) contains a particularly graphic depiction of a woman in childbirth, while another painting by Wilson Bigaud shows a waterlogged corpse washing up on the shore of a densely populated fishing village. Masked paramedics run to retrieve it; you can almost smell the putrid honk of decay.
Haiti’s contradictions, culture, and history have created a modern country like no other. It’s often said of the Magical Realism authors who came to prominence there in the mid-20th century that it was unclear where the “realist” side of the equation came to an end and lapsed into the “magical.” Similarly, its art of the era defied any easy alignment with what we generally understand as Surrealism. Breton, for one, was well-aware of this. “He was completely affected by his trip,” Brett said, “but he wasn’t arrogant enough to say, ‘I’ve anointed this country with Surrealism.’” What Breton had identified was something different: a style that was inherently, distinctly Haitian.
Digby Warde-Aldam
Correction: A previous version of this story misspelled Minium Cayemitte’s name as Minimum. It has been corrected.
Related Stories 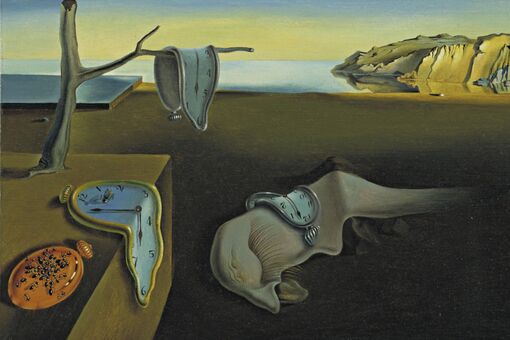