The Hallucinatory Art of Milwaukee’s Most Fabled Eccentric 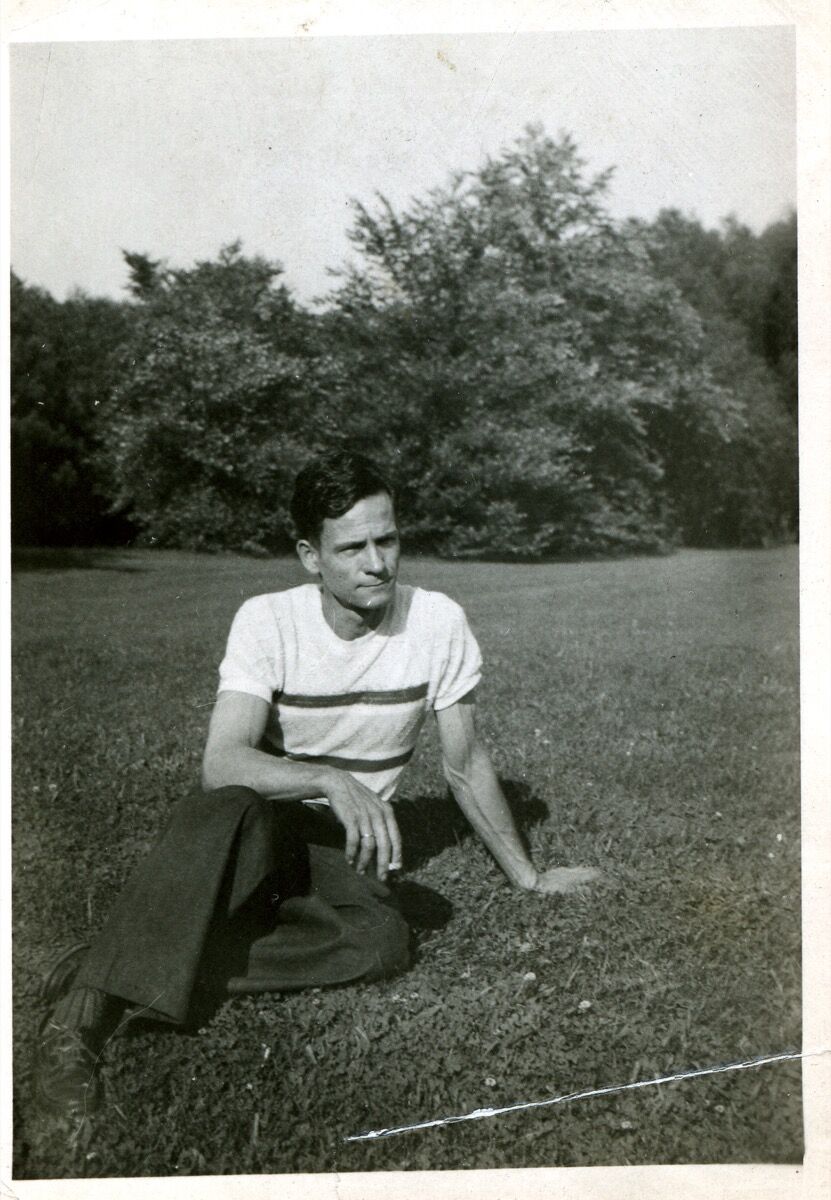 Portrait courtesy of the artist. 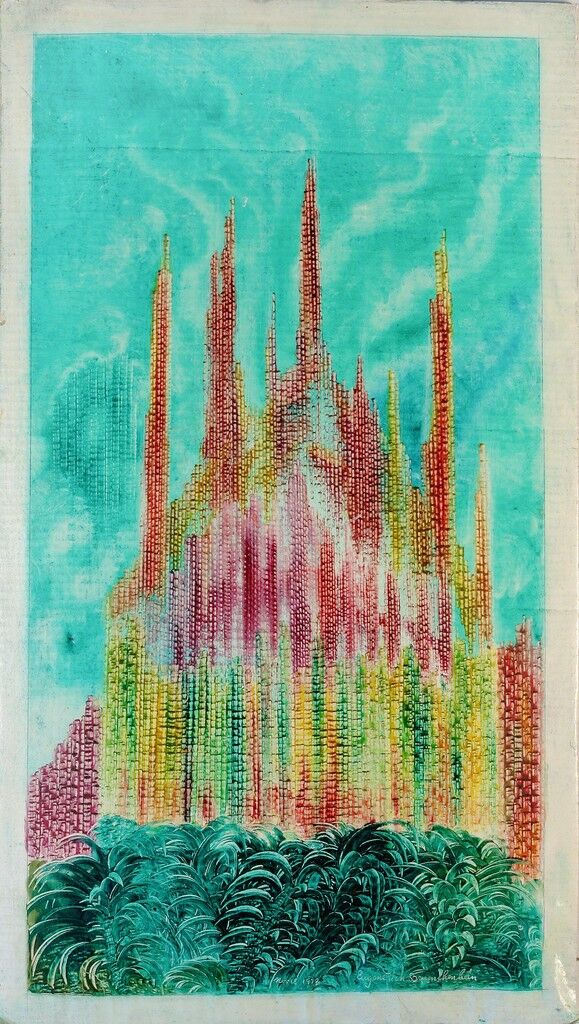 Eugene Von Bruenchenhein
Untitled, November 18, 1978, 1978
Fleisher/Ollman
Above the doorway of the kitchen of his Milwaukee bungalow,
Edward Eugene Von Bruenchenhein
(pronounced BROON-shen-hine) mounted a small metal plaque on which he’d inscribed his various vocations: “Freelance Artist — Poet and Sculptor — Inovator [sic] — Arrow maker and Plant man — Bone artifacts constructor — Photographer and Architect — Philosopher.” Despite what he deemed to be the grand significance of these pursuits, most Milwaukeeans who encountered this runty recluse viewed him and his activities far differently, in what might be summed up with one word: oddball.
Although he craved recognition and made efforts to attain it, such an estimation didn’t faze Von Bruenchenhein. From his youth, “EVB” (as a now-adoring art world refers to him) possessed a lofty sense of his own destiny, which he knew others could not fathom. A high school dropout, graded 4-F due to his diminutive size when he tried to enlist during World War II, he never acceded beyond a menial job at a flower shop and, later, a commercial bakery. “Many who have brought enlightenment to the world seem strang [sic] to the lay man…” he noted in one of his many philosophical proclamations, in which he also declared, “I am from another world, I always felt so, and by my work it cannot be disavowed, disclaimed or, refused.” 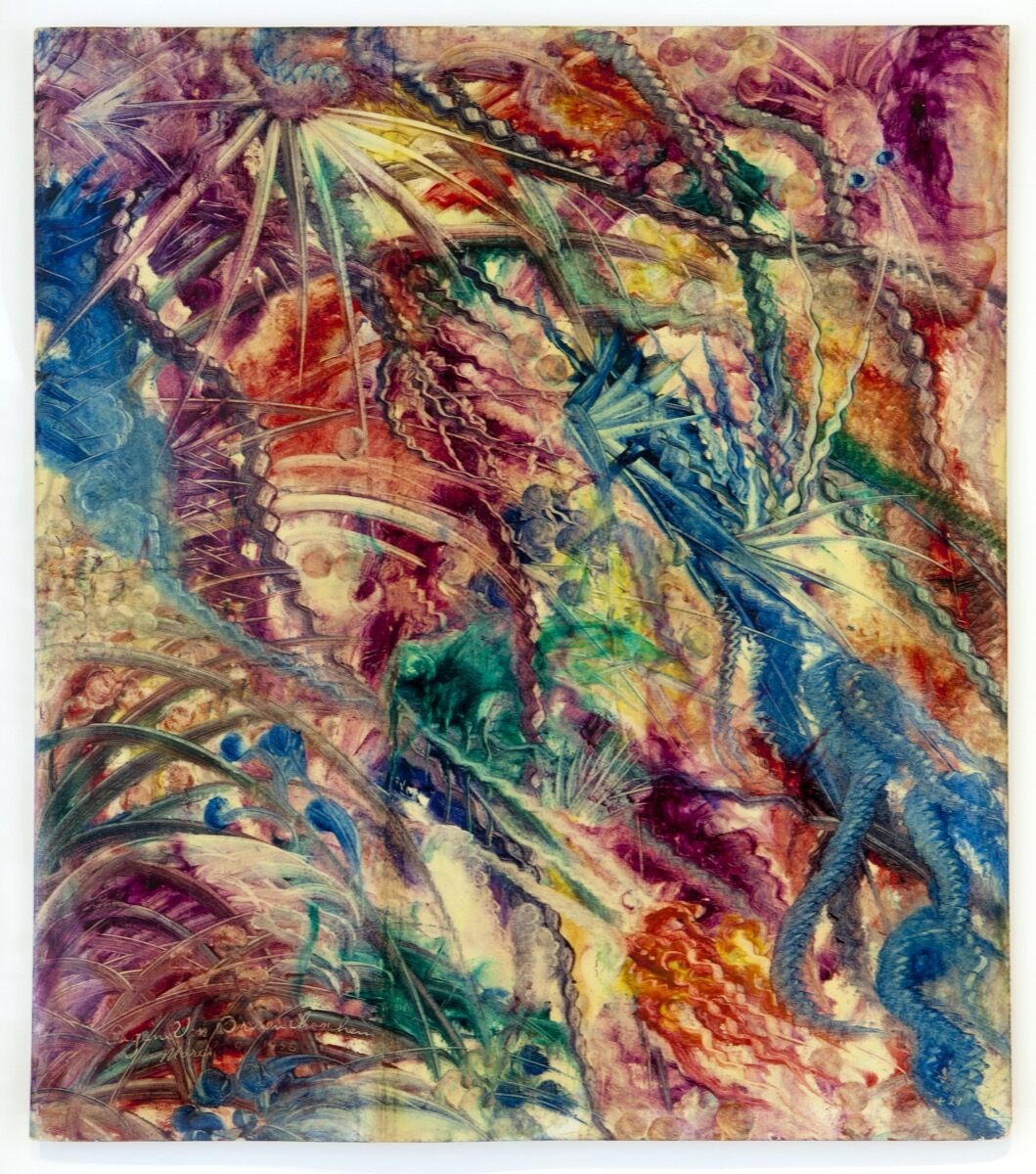 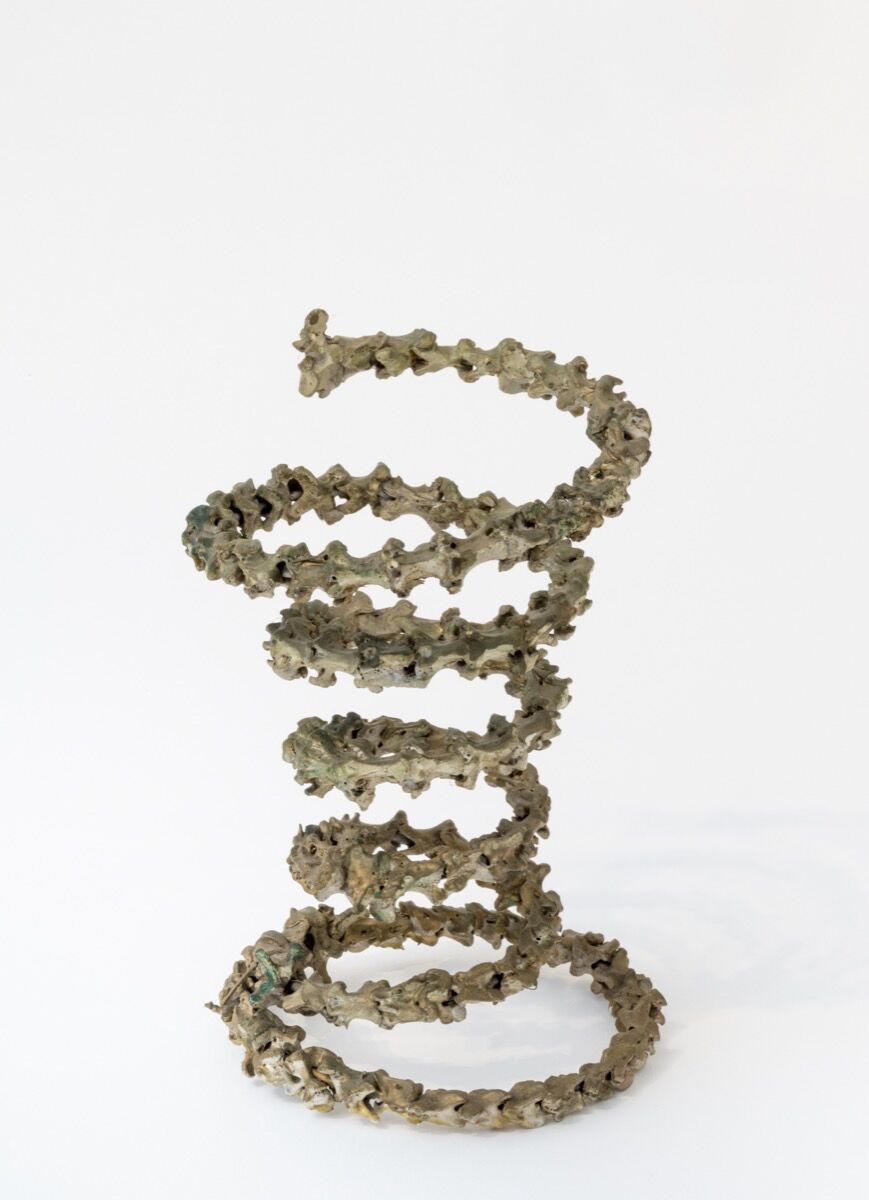 Following EVB’s death in 1983, examples of his vast production—photography, drawings, paintings, ceramics, and sculptural constructions made from bone—were discovered, and have since been acquired by prominent international art museums and private collections. The John Michael Kohler Arts Center, in Sheboygan, Wisconsin, which rescued his work and first established his reputation, is presenting “Mythologies: Eugene Von Bruenchenhein,” a sensitively installed retrospective, on view through January 14, 2018.
An accompanying catalogue examines, in the words of contributing essayist, artist, and Wisconsin native
Michelle Grabner
, the “uniquely individual imagination formed within a man who was hemmed in by a midcentury, middle-American landscape.” An essay by Brett Littman, the director of New York’s Drawing Center, posits EVB as an imaginative theorist and conceiver of self-generating aesthetic systems, akin to those found in everything from classical elements of Islamic design to the buildings of
Antoni Gaudí
.
Indeed, it’s hard not to think of the artist as a marvelous American fusion of the visionary artistry of
William Blake
and
Max Ernst
; Von Bruenchenhein preached with passionate lyricism about the cosmic divinity apparent all around us, while realizing surreal visions of heaven and hell in paint and bone, using inventive techniques of his own devising.
Born in Marinette, Wisconsin, on July 31, 1910, to a sign maker and his wife, EVB was the second of three sons. Early in his life, the family moved to a bungalow that his father built in West Allis, a suburb of Milwaukee. His mother died when he was seven, and his father remarried shortly thereafter. His new wife was Elizabeth Mosley, a freethinking and adventurous woman who had been a school teacher in Panama and became a major inspiration for EVB, encouraging his interest in nature, especially plants, and astronomy, metaphysics, and art making.
After Moseley died in 1938, EVB met a 19-year-old woman named Evelyn Kalka at the Wisconsin State Fair. She liked to draw and paint. The couple married four years later and moved into the house EVB had grown up in, which his father gave them. 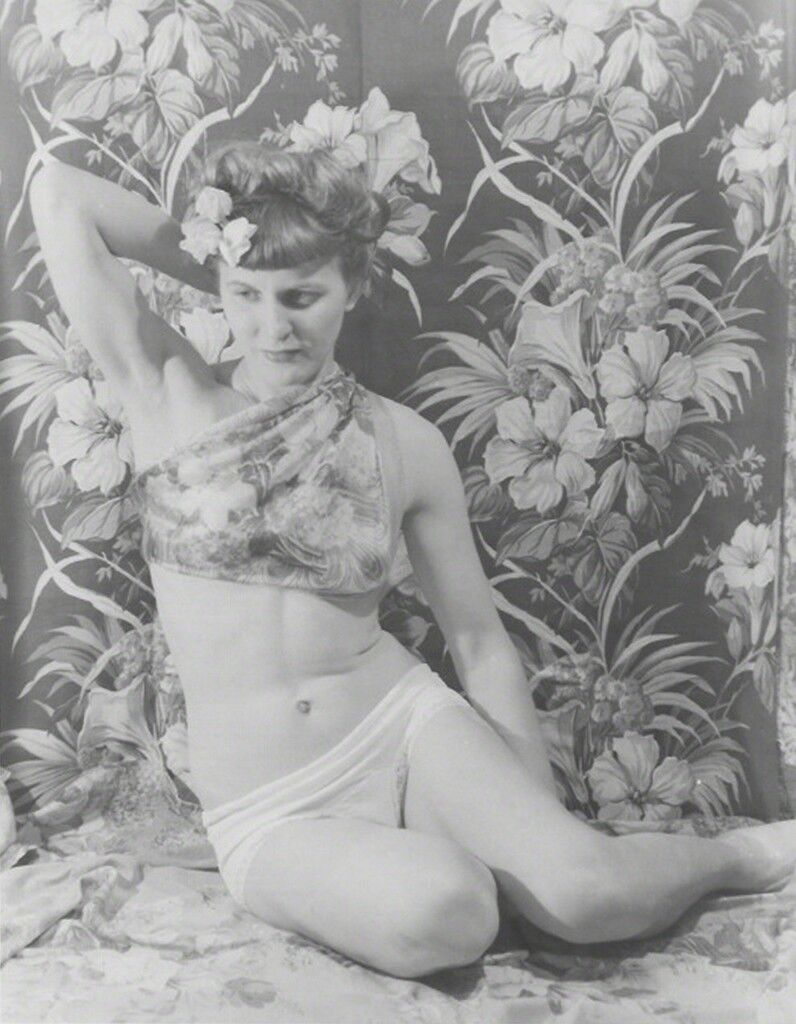 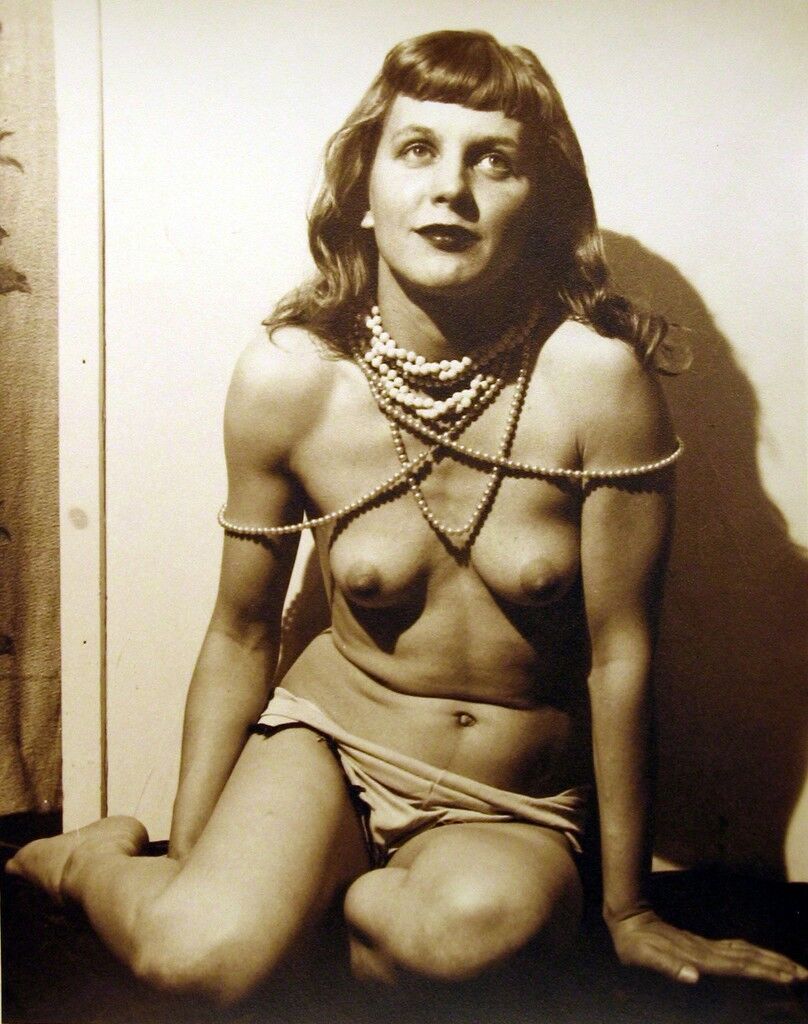 Eugene Von Bruenchenhein
Marie w Beads, ca. 1940
Carl Hammer Gallery
Advertisement
What Kalka didn’t know then is that over the years the house would turn into a fantastical realm of her husband’s obsessive art practice, packed from floor to ceiling with his creations, with its walls and floors also serving as canvases. “It was like King Tut’s tomb,” one friend later said. There were even giant exotic heads standing guard around its exterior.
Before her marriage, Kalka seems to have been adrift. She left school in the eighth grade, and was unemployed during her courtship with Von Bruenchenhein. Not long after her wedding, her husband renamed her “Marie,” after a favorite aunt. Was this evidence of his domineering personality as some contemporary critics have suggested, or—responding to the alchemy of romantic love—did Kalka elect to be transmuted by her beloved into an elevated state of womanhood by the name of Marie? We’ll probably never know.
What we do know is that EVB adored her—and it’s clear why. She possessed something of the winning wholesome sexiness of Marilyn Monroe back when she was Norma Jean. Her husband wrote poems to and about her; made crowns for “the Duchess Marie” (he was convinced of some misty aristocratic background they both possessed); painted her name on the walls of their home; and inscribed it on one of his bone towers.
But most significantly, he photographed the radiant Marie: posed against fabric backdrops printed with tropical flowers and leaves, sometimes fully dressed, but more often nude or semi-nude in lingerie or simple white panties, and sometimes gently bound by strands of cheap imitation pearls like an odalisque. Thus began an erotic dance between husband and wife, a fantasy world that unfolded over two decades. EVB would develop the images in their bathroom. 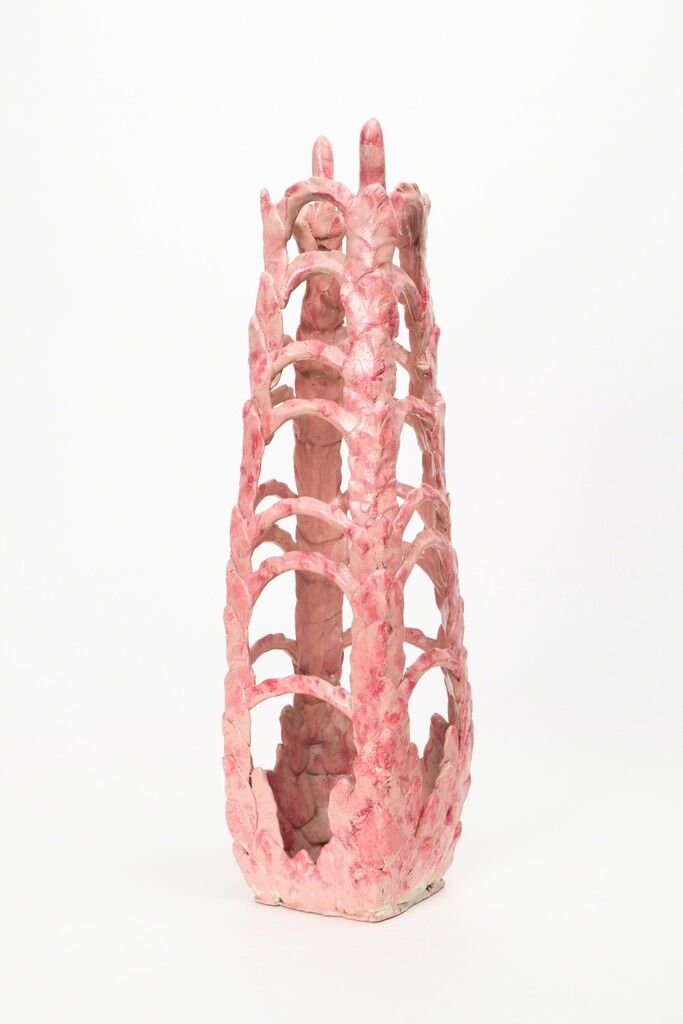 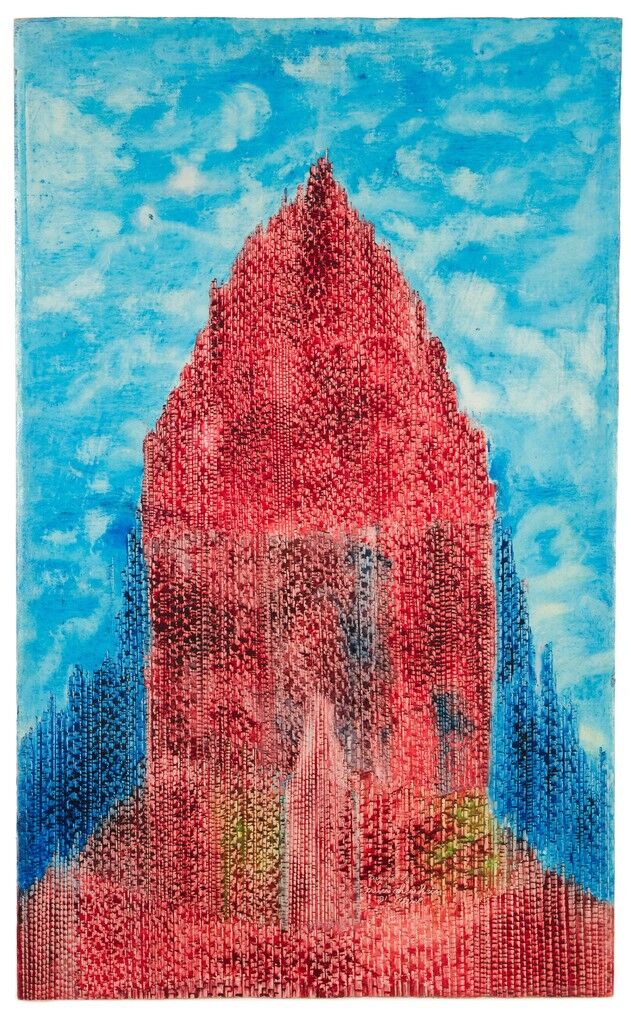 Eugene Von Bruenchenhein
City Cibola (April 3, 1981), 1981
Fleisher/Ollman
Contemporary critics have been divided as to how to assess these photographs. Was Marie a precursor to
Cindy Sherman
? How collaborative were the portraits? In any case, as the sessions went on, the initial frisson soon faded into a wife’s affectionate but bored indulgence. By 1954, Von Bruenchenhein had instead begun to turn his attention to painting.
The threat of an atomic war was also an urgent motivator and subject. Deeply distressed by the idea of nuclear destruction, he would come home from work and paint into the wee hours in a kind of frenzy, depicting horrific, saturated scenes of landscapes rife with fire and explosions on Masonite or cardboard panels cut from discarded bakery boxes. True to his idiosyncratic vision, EVB did not paint in a typical way but developed his own process, maneuvering paint with his fingers, quills, nails, leaves, sticks, and later burlap, cardboard, and crumpled paper. (Later, he would use an actual paintbrush when working on his ceramic and bone constructions. But they were paintbrushes made out of locks of Marie’s hair, bound to a stick or cocktail straw, as he had little extra cash to spend on art supplies.)
Keen to communicate his message, he appears to have sent at least one of his paintings to the Kennedy White House, as there is a letter from the Oval Office thanking him for a painting. And here it’s worth noting that while EVB is usually categorized as an “
outsider artist
,” he was in fact a man deeply engaged in the world. He read the newspaper, as well as books.  He had at least one volume on modern art theory,
Amédée Ozenfant
’s Foundations of Modern Art, a 1952 edition.
He possessed both a telescope and a microscope, and what he saw using these scientific instruments served as inspiration for many of his most remarkable paintings. He created, for instance, a whole series of hallucinatory works in psychedelic hues portraying the creatures and terrain of the First World, a colossal planet which he believed was Earth’s progenitor, having been split off from it during a cataclysmic event eons before. Other of EVB’s paintings presciently resemble images of nebulae that the Hubble telescope has documented only in the past two decades or so.
By 1959, a variety of physical ailments forced Von Bruenchenhein to leave his bakery job; for the rest of his life, he and Marie would subsist on his disability income. Although impoverished and ailing, his curiosity and creativity remained fully stoked. In the mid-1960s, his attention turned to making elaborate ballpoint drawings with the aid of rulers, French curves, and other drafting instruments. The works suggest floral imagery, birds, spaceships, and temples, which he glued into an enormous book of wallpaper samples. 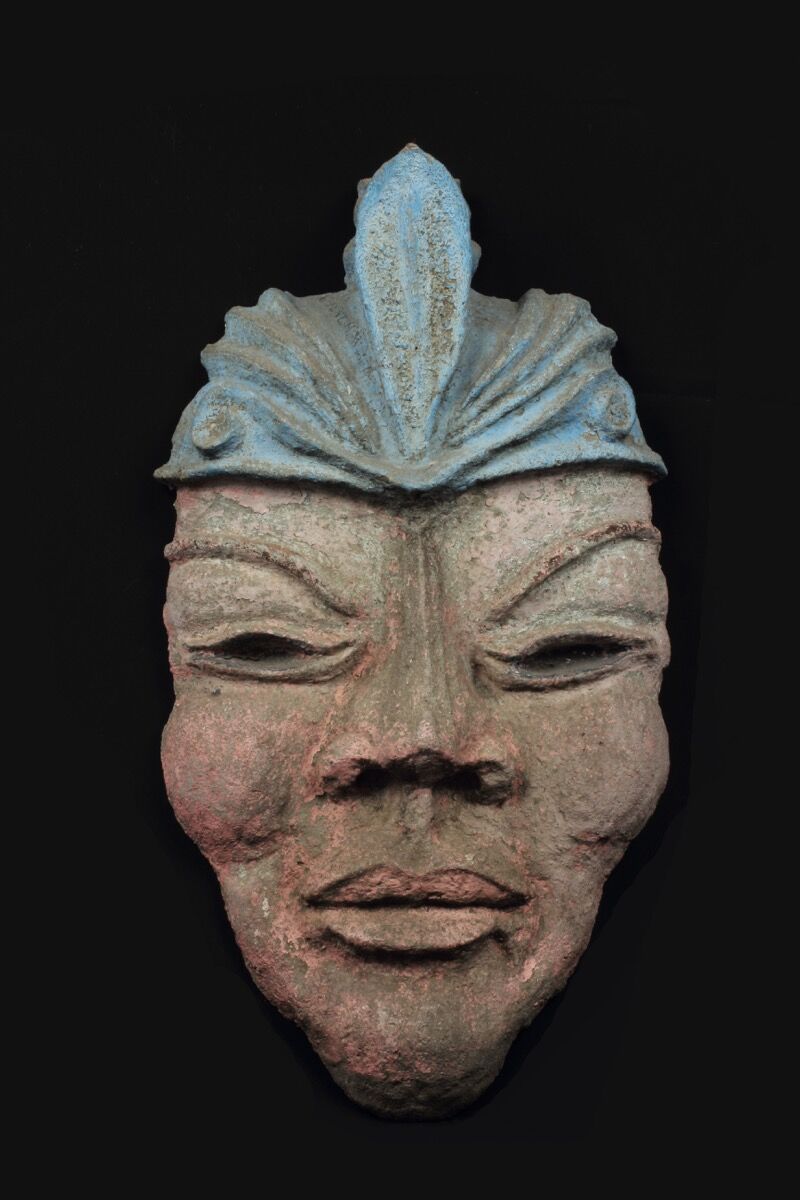 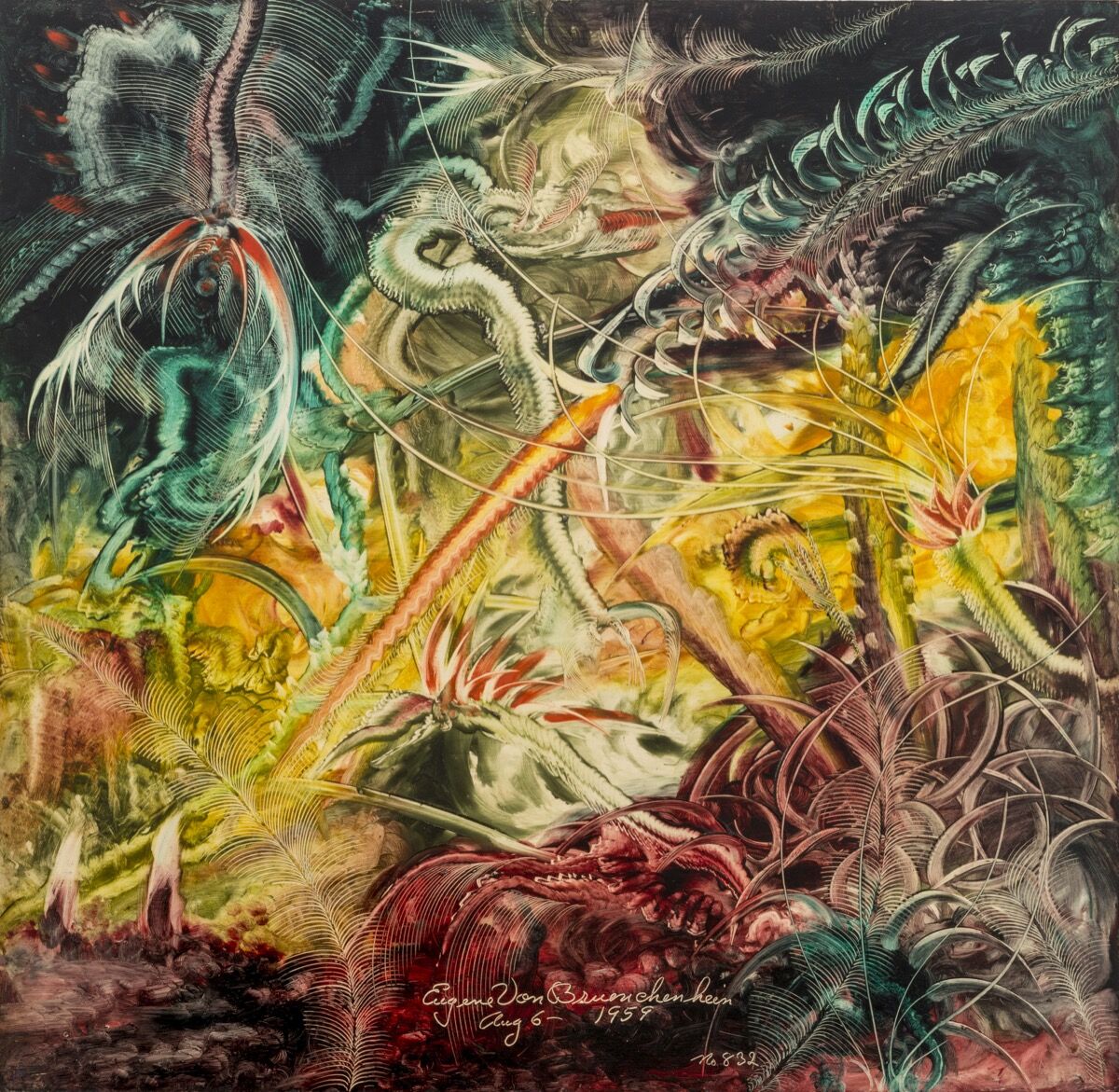 After a few years, he began sculpting facsimiles of flowers and sedum, and assembling floriated urns, sensors, and crowns out of singularly formed clay petals and leaves. These he baked in his kitchen oven before painting. He also began assembling fantastical miniature thrones out of salvaged turkey and chicken bones that, to contemporary eyes, resemble props for a sci-fi video game, or early models for
Joris Laarman
’s computer-generated Bone chair.
Out of these investigations, EVB developed a whole new body of work, beginning in 1976: his tower paintings. These he created with an entirely new painting technique, in which he used the fluted ends of pieces of cardboard to apply paint onto a smooth cardboard surface, producing what looks like linear structures, which he then “built” with. The effect is somewhat reminiscent of decalcomania, a technique closely associated with Ernst; EVB’s palette resembles Ernst’s, as well. These utopian visions of a splendid new world may speak of a new civilization to come, or possibly the artist’s own arrival in a new metaphysical realm.
As if to ground his vision in a tangible reality, in 1979, EVB began assembling actual towers, each several feet tall, using poultry bones. Leg, wing, and breastbones served as the base, and smaller, thinner bones and vertebrae formed the shaft. Some of the structures are crowned, fittingly enough, with hollow eggs. So many bones were required for the series that EVB and Marie had to raid the dumpsters behind local Kentucky Fried Chicken restaurants to acquire the necessary supplies. If they bear a certain resemblance to the Watts Towers in L.A., that isn’t by coincidence: A newspaper clipping about Simon Rodia’s creations was found among EVB’s personal papers. (Interestingly, these works may be the first instance of one “outsider artist” influencing another.)
In 1981, two years before he died, EVB returned to his tower paintings. City Cibola, one of the last he completed before his death, refers to the mythic Mexican city rich in gold, which tantalized the conquistadors.
The promise of riches certainly eluded Von Bruenchenhein his entire life; but then, the curse of the prophet is that he seldom lives to see the promised land. In one of his philosophical musings, he observed: “We consider ourselves so smart and yet after the great length of time man has lived on Earth, he has just scratched the surface of knowledge. . . .As far as science goes we have only looked at the mirror, not [at] what is concealed behind.” Von Bruenchenhein may never have experienced critical acclaim or financial reward for his unique talents and vision, but it seems he did get to see behind the mirror. That’s a reward reserved for only a chosen few.
—Marisa Bartolucci
Related Stories