The Hamptons as Artist Paradise, beyond the Glitz and Glam 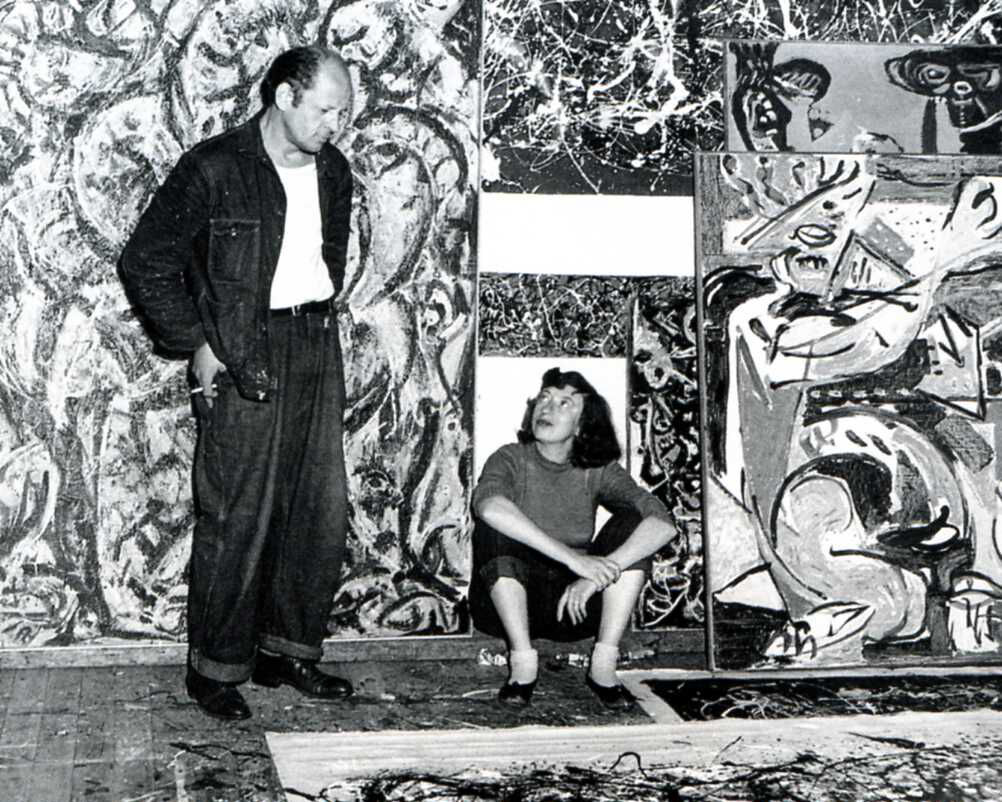 Jackson Pollock
was struggling in New York City. It was 1945, and Peggy Guggenheim had been pressuring the rising painter to make new work for her Art of This Century Gallery. Temporary relief for the
Abstract Expressionist
came in the form of a summer rental opportunity: His friend, artist
Reuben Kadish
, was staying in a home on the East End of Long Island, and invited Pollock and painter
Lee Krasner
(his partner) to join his family. The summer proved so relaxing that when Pollock returned to the city, he decided to move out to Springs (a hamlet in East Hampton), marry Krasner, and settle down.
The relocation was a temporary godsend. Pollock got sober (for a few years) and began his most famous series. He laid canvases on the wood floor of his Hamptons studio, splattering them in a revolutionary new way. In 1949, LIFE magazinefamously asked in an exultant feature: “Is [Pollock] the greatest living painter in the United States?” Pollock’s success withered shortly after, as he descended back into alcoholism and died from a drink-fueled car wreck about a mile from his Hamptons home in 1956. Yet for a few years, the area had offered the perfect respite—just a train ride from the New York art world, but far enough to diminish distraction. 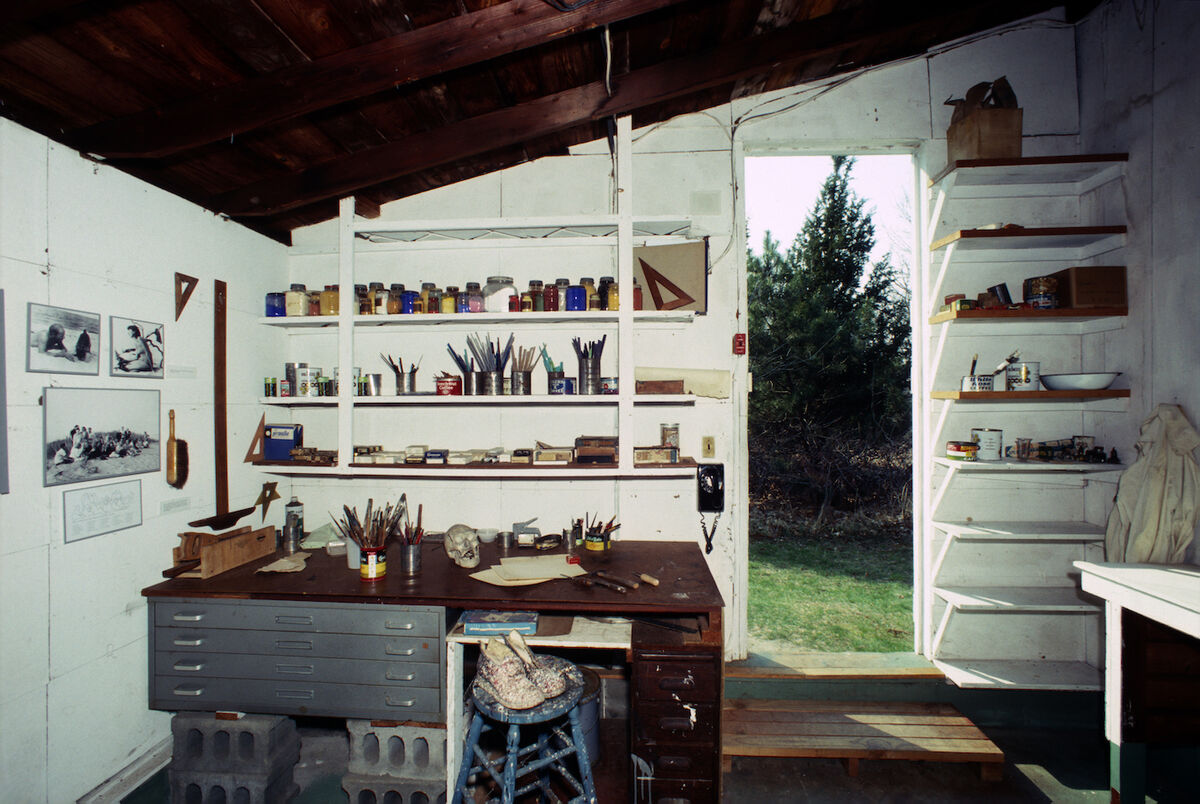 Artists had been living and working in the Hamptons, and its surrounding Suffolk County, well before Pollock was born. Abraham Tuthill, a native of the North Fork town of Oyster Ponds (now called Orient), made portraits of family members and locals from around 1800 to 1850. (North Fork isn’t technically located in the Hamptons, but is just north of them, and still considered a part of the “East End.”) Tuthill’s subjects appear well-dressed and regal—a far cry from the surfers and bohemians whom the area eventually served. Other local artists of the time, including Hubbard Latham Fordham and Orlando Hand Bears, also supported themselves with commissions and commercial painting jobs.
In 1874,
Winslow Homer
journeyed east from New York City and documented the culture on Long Island beaches, far from the stuffy rooms in Tuthill’s work. Homer’s pictures, however, still reveal a strain of sartorial conservatism: In East Hampton Beach, Long Island (1874), ladies lounge on the sand in long white dresses and sweaters, huddling under umbrellas in an apparent attempt to ward off even the smallest suntan.
3 Images
View Slideshow

Advertisement
Four years later, says Helen Harrison, co-author of the 2002 book Hamptons Bohemia: Two Centuries of Artists and Writers on the Beach, the Hamptons got its first real artist “incursion.” The Long Island Rail Road financed a trip for 11 members of the Tile Club—an artist society whose broader membership included Homer, as well as
William Merritt Chase
,
Edwin Austin Abbey
, and William C. Baird—and the sponsored cohort ventured across the Hamptons, rendering their experiences for the railroad’s promotional materials. It was a kind of artist junket, helping to establish the area as a charming destination.
It’s funny to think that the Hamptons once needed publicity, but according to Harrison, train service didn’t even extend to Montauk(the eastern tip of Long Island)until 1895, and “it was still terra incognita for tourism.” Throughout the following Jazz Age decades, the area gradually became a socialite hotspot. Sara and
Gerald Murphy
, a wealthy couple who inspired Ernest Hemingway’s A Moveable Feast (1964) and F. Scott Fitzgerald’s Tender is the Night (1934), met at an East Hampton party. Gerald was a painter himself. 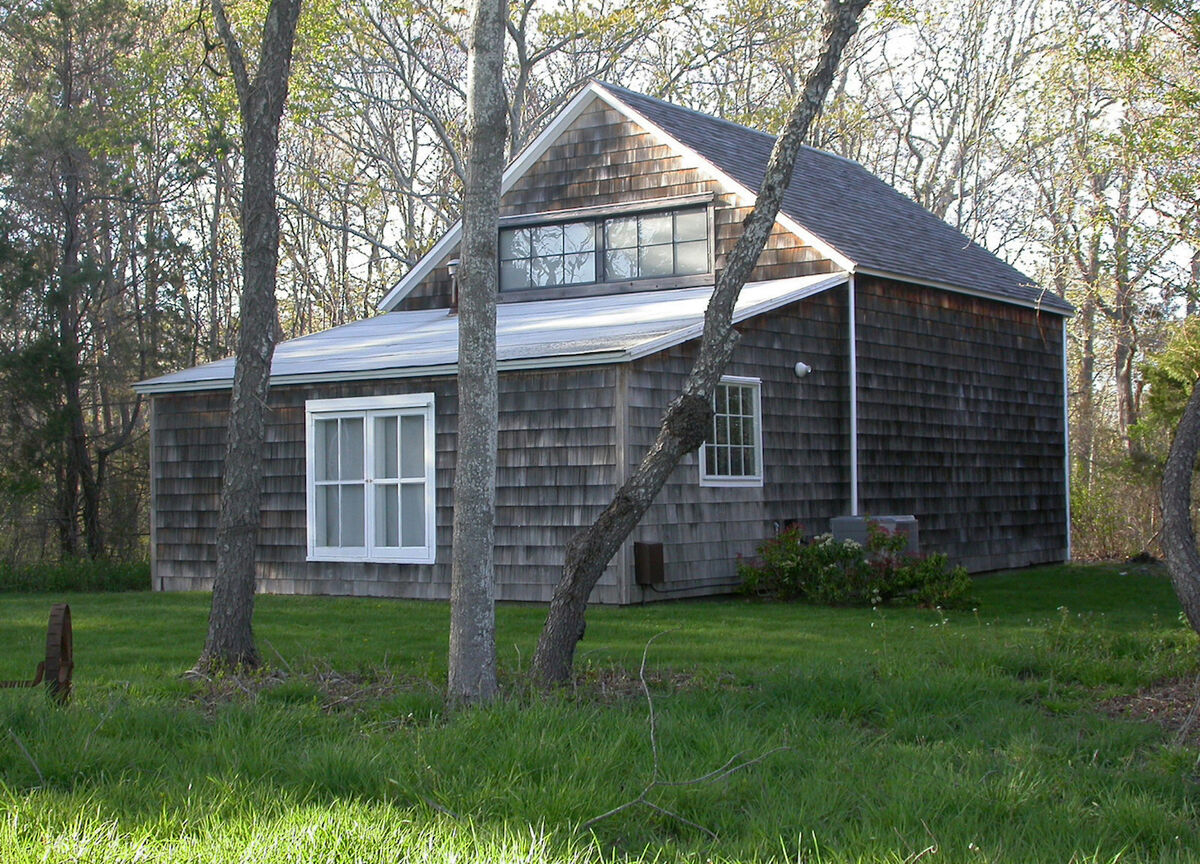 Jackson Pollock’s barn studio, where Pollock and Krasner painted many of their most important works. Courtesy of the Pollock-Krasner House and Study Center, East Hampton, NY.

If the area remained slightly under the radar for years, the
Surrealists
had no trouble finding it: Peggy Guggenheim led them right out there. Just before Pollock arrived in the Hamptons,
Max Ernst
,
André Breton
,
Enrico Donati
, and the rest of their predominantly European coterie found relief from the war-torn continent in the sea breezes of Amagansett and the East End. According to Harrison,
Fernand Léger
’s mistress (and an artist in her own right), Lucia Christofanetti, was one of the earliest artistic folk to buy property and decamp to the Hamptons year-round.
Guggenheim herself offers a link between the Surrealists and Abstract Expressionists, and she impacted both groups’ real estate choices and vacation spots. Indeed, Pollock and Krasner bought their home with a loan from the gallerist. At the time, art critic Harold Rosenberg was their only friend to own property in Springs. That soon changed: “If you have a house in the Hamptons, you have house guests,” says Harrison.
Willem
and
Elaine de Kooning
came to visit Krasner and Pollock in 1948, and in the early 1960s, they got their own place there. Fellow painters
Robert Motherwell
and
Helen Frankenthaler
also spent significant time in the region, as did their contemporary,
Jane Freilicher
. Soon, there were enough summering New York bohemians in the Hamptons (and a few full-timers) to form a sports roster. In 1954, the annual Artists & Writers softball game began.
Franz Kline
teamed up with Pollock, Willem de Kooning, and
Joan Mitchell
, while Rosenberg accepted Elaine de Kooning and at least one actor, Eli Wallach, onto his side. By the 1960s, film director Elia Kazan and journalist George Plimpton had joined, too—glitz was finally infiltrating the landscape. (The game still rages on today as a fundraising event; Christie Brinkley, Bianca Jagger, and Paul Simon have all participated.)
Yet despite rising real estate prices and more famous visitors, the Hamptons continued to attract artists throughout the 20th century; the area remained more naturally beautiful and less incessantly distracting than the city. “It was certainly a recommendation that this was a great place to make art,” says writer and curator Phyllis Tuchman.
This summer, Tuchman is organizing an exhibition for the East Hampton art institution Guild Hall, which will feature
Ellsworth Kelly
’s work from his 1960s visits to the East End. The artist made drawings of plants and crabs, photographs of barns, and shaped canvases related to barn features: Clearly, the bucolic landscape influenced his practice. 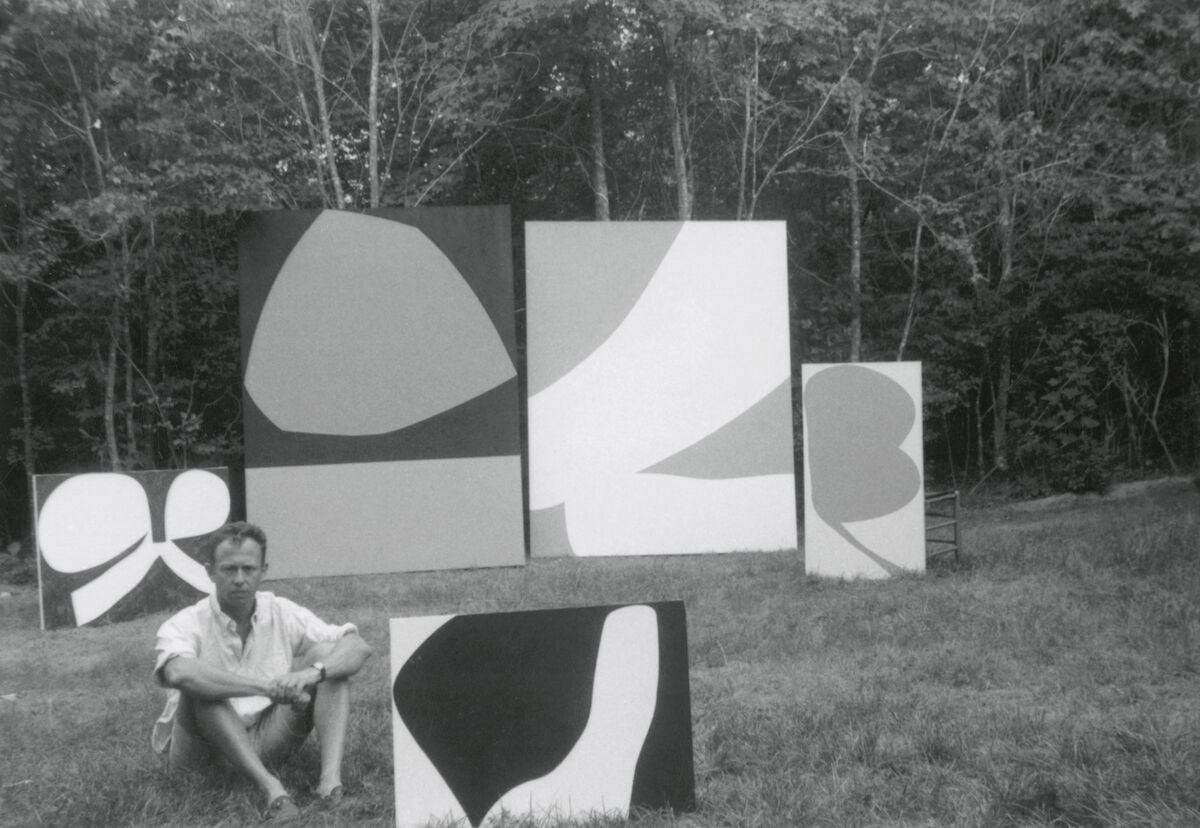 Still, the region had become so high-profile that the era’s most ardent celebrity seeker,
Andy Warhol
, decided he needed his own place there. In 1971, Warhol and his collaborator Paul Morrissey bought a massive, five-cottage estate in Montauk.
Keith Haring
and
Julian Schnabel
visited, as did Jacqueline Kennedy and John Lennon.
In the mid-1970s, artist
Keith Sonnier
began visiting the Hamptons. He was from southern Louisiana near the Rockefeller Wildlife Refuge and had gone to Rutgers University, in New Jersey, for his MFA. “It re-introduced me to a rural setting and especially nature,” he says of the Hamptons. Sonnier made his first real bodies of work there, uniting his technology-based practice with ideas about the natural world. Last year, he finally sold his New York apartment; now, he’s a permanent Hamptons resident, living in a Bridgehampton home he’s owned for 30 years.
Despite the influx of artists and wealth in the Hamptons by the late 1970s, galleries hadn’t set up shop. Finally, in 1981, New York dealers Holly Solomon, Leo Castelli, and Marian Goodman took a chance on the area. Their collaboration, the Castelli-Goodman-Solomon Gallery (“C-G-S”), presented art by major
Pop art
figures such as Warhol and
James Rosenquist
. “The C-G-S is the first major attempt to test the Hamptons market for big-name contemporary art,” the New York Timesdeclared in 1982, predicting an art boom in the area. 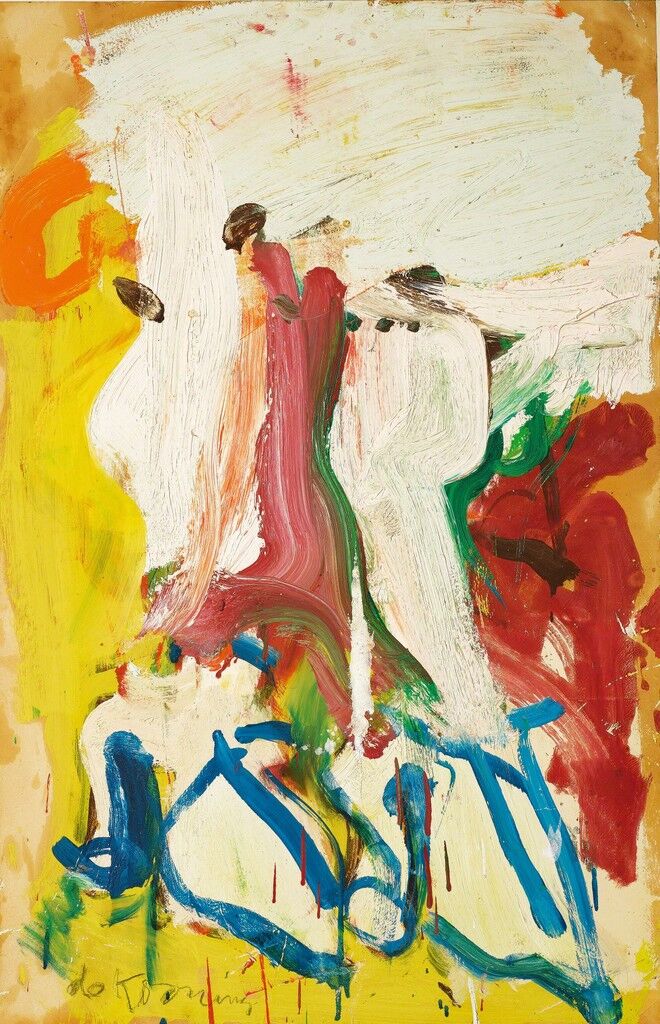 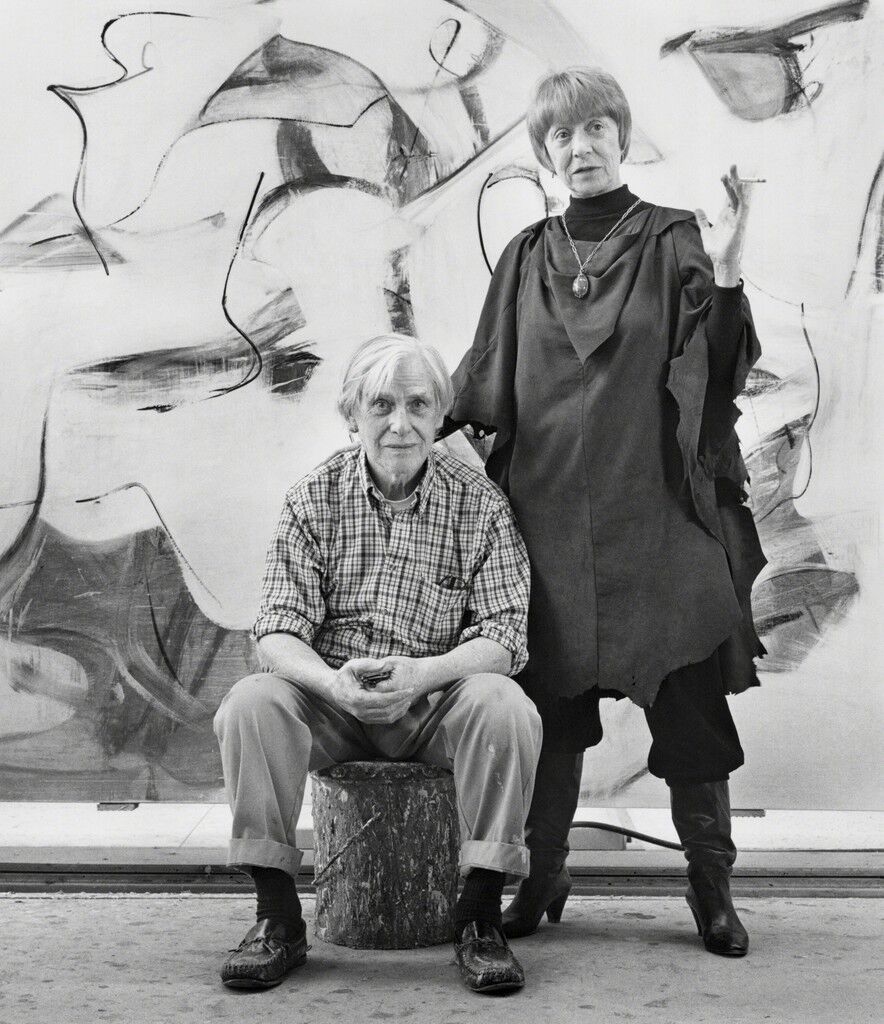 Mariana Cook
Willem and Elaine de Kooning, East Hampton, New York, 1983
Lee Marks Fine Art
It didn’t last. “As the gallery attendant told me, people window-shopped there and then they went back to the city and bought art. It wasn’t worthwhile,” says Harrison. “It was just a summer showcase, really.” The gallery shuttered after a few years.
Yet at least one contemporary gallerist thinks the Hamptons are a perfect spot for mid-sized outfits. As Joel Mesler, who runs Rental Gallery in East Hampton (and used to run UNTITLED, among other Lower East Side ventures), says, “My soul was bleeding and my business was bleeding in the city.” He claims that last summer, he did more business in three months than he had the entire last year in New York. In the new location, he has far more breathing room and way less overhead.
Another mid-sized gallery, Halsey McKay, figured this out back in 2011, when it opened its exhibition space in East Hampton. This summer, the gallery will exhibit work by talent ranging from the technology-obsessed
Trevor Paglen
to the inventive young installation artist
Cynthia Talmadge
. Halsey McKay’s occasional collaborations with Manhattan galleries (Metro Pictures, Susan Inglett) convey a sense of camaraderie and city-wide reach that’s integral to its Hamptons-centered project. 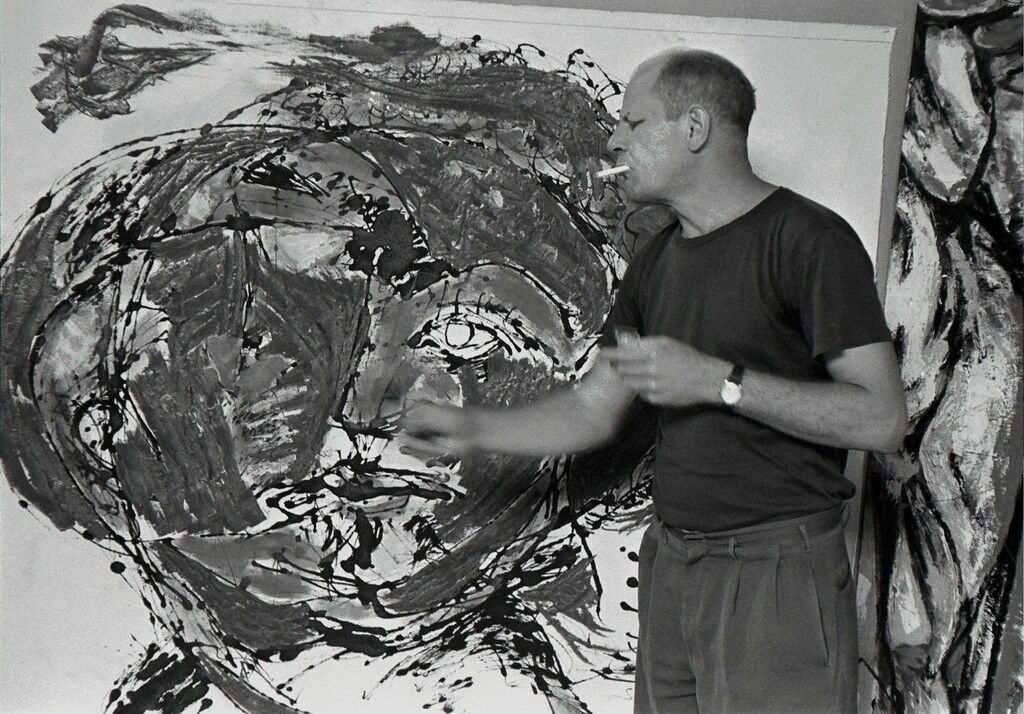 Tony Vaccaro
Jackson Pollock painting at his home, East Hampton, 1953
Monroe Gallery of Photography
If there’s a dearth of top-tier commercial galleries, the area has long offered stellar art institutions. This summer, the
Herzog & de Meuron
-designed Parrish Art Museum in Southampton and the Dia-owned Dan Flavin Art Institute in Bridgehampton are both showing Sonnier’s work.
Terrie Sultan, director of the Parrish, began visiting the area when her brother, artist
Donald Sultan
, bought a house in Sag Harbor in the mid-1980s. She’s been at the museum (which hosts a Sonnier retrospective this summer) since 2008, and asserts that more artists join the community each year. “It’s a complicated situation out here,” she says. “[People understand] the Hamptons as a place with giant McMansions and only rich people that come out during Memorial Day and Labor Day.”
That’s just a small part of the story, according to Sultan: Now, there’s a critical mass of artists living in or near the Hamptons, both well-known (
Cindy Sherman
,
Eric Fischl
) and emerging. “Community begets community,” she offers. Sonnier remarks less on the price than on the changing pace of life in the Hamptons: “More people, more cars, more activity,” he explains.
3 Images
View Slideshow 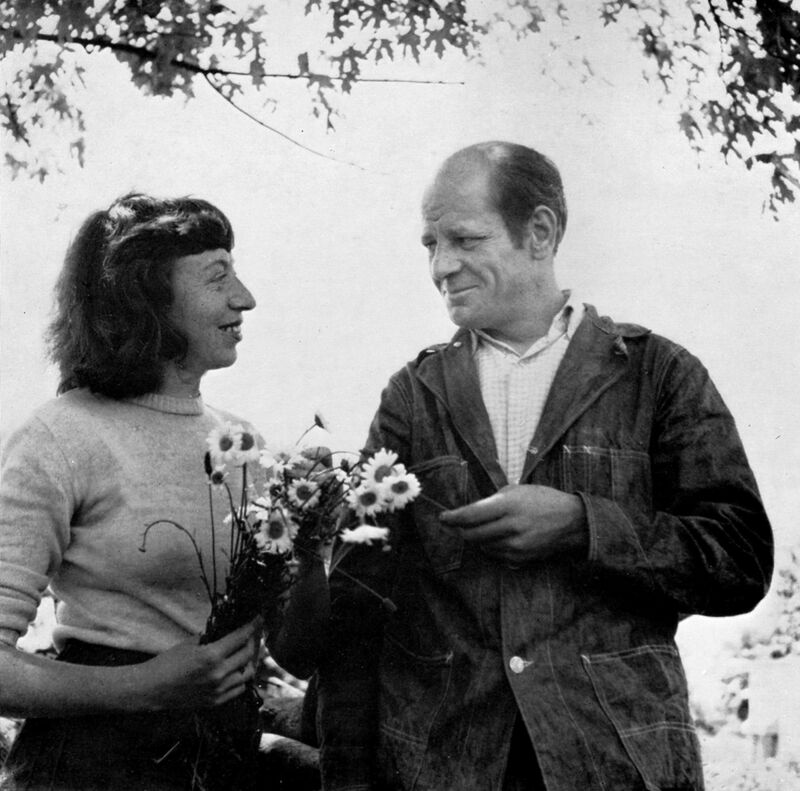 Real estate blogs, of course, offer a narrative that greatly diverges from what artists and curators—many of whom invested decades ago, when prices were more reasonable—will tell you. The Real Deal recently reported that the area’s most expensive rental is in Southhampton, costing a total of $2.25 million for a Memorial through Labor Day stay. If that’s not necessarily representative of the entire area, it certainly conveys a market inaccessible to many younger creative people.
Even today, Pollock’s legacy looms. Artist
Hiroyuki Hamada
moved to the Hamptons from New Jersey about 10 years ago (his wife’s a local). “You can wake up in the morning, walk out to the yard, hear the birds chirping instead of the cars going by,” he offers. He’ll meet people who knew the de Koonings and Pollock, and is well aware that “Pollock’s place is seven minutes away.” The ultimate story of American artistic passion, creation, and destruction still serves as both an inspirational and cautionary tale for today’s painters, sculptors, and photographers of the Hamptons: Make your work, drink in moderation, and don’t speed.
Tuchman, the curator and writer, herself expounds on the area’s appeal. “It’s so damn beautiful out there,” she says. “Some of the sunsets, the big sky, almost makes me want to be an artist.”
Alina Cohen
Correction: A previous version of this article included an image mistakingly identifying Robert Motherwell as being at his Hamptons home. The location shown in the photograph was actually Provincetown, Massachusetts. This image has been removed from the article.
Related Stories