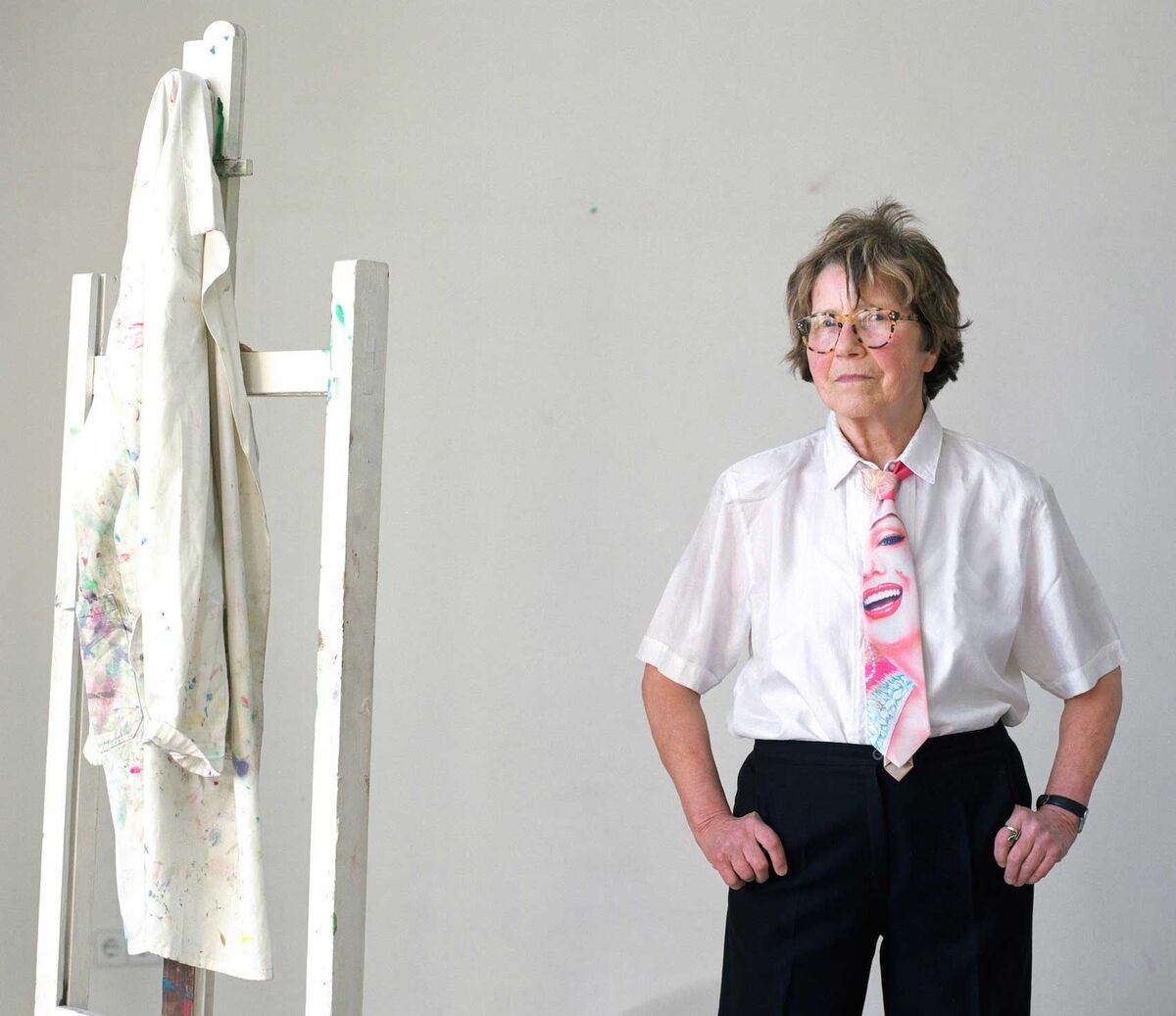 The late Austrian painter
Maria Lassnig
had a love affair with Greece that was long, steady, and, at least in terms of its influence on her work, quite secret.
But not for longer. To coincide with documenta 14, The Maria Lassnig Foundation in Vienna joined forces with the Municipal Gallery of Athens (whose artistic director Denys Zacharopoulos is a longtime advocate of Austrian painting, and Lassnig in particular), as well as the omnipresent curator Hans Ulrich Obrist, to organize “The Future is Invented with Fragments from the Past.”
The exhibition—the last in which Lassnig had personal input, before she passed in 2014—highlights her relationship to a country she frequently visited, her fascination with mythology and antiquity, and the way these relate to feminine identity.
It’s a thought-provoking overview of several decades of the artist’s musings on classicism, displaying her signature self-portraiture and chalky, exuberant colorwork.
On view for the first time are 28 works on paper that Lassnig created while holidaying on Greek islands, including Crete, Cyprus, and Santorini. Many of them reflect Greek landscapes and light, but their most striking aspect is the artist’s insertion of her likeness into the dominant male roles of Greek mythology: We see her as Neptune, Zeus, Atlas, Sisyphus, and as King Minos with a bull wrapped around her neck, rising from the sea.
“Lassnig was always interested in antiquity,” said Obrist during the exhibition’s opening day on April 7th, explaining that the artist traveled to Greece not as a countercultural hippie (like the younger Martin Kippenberger), but rather was drawn by the allure of inexpensive package holidays. 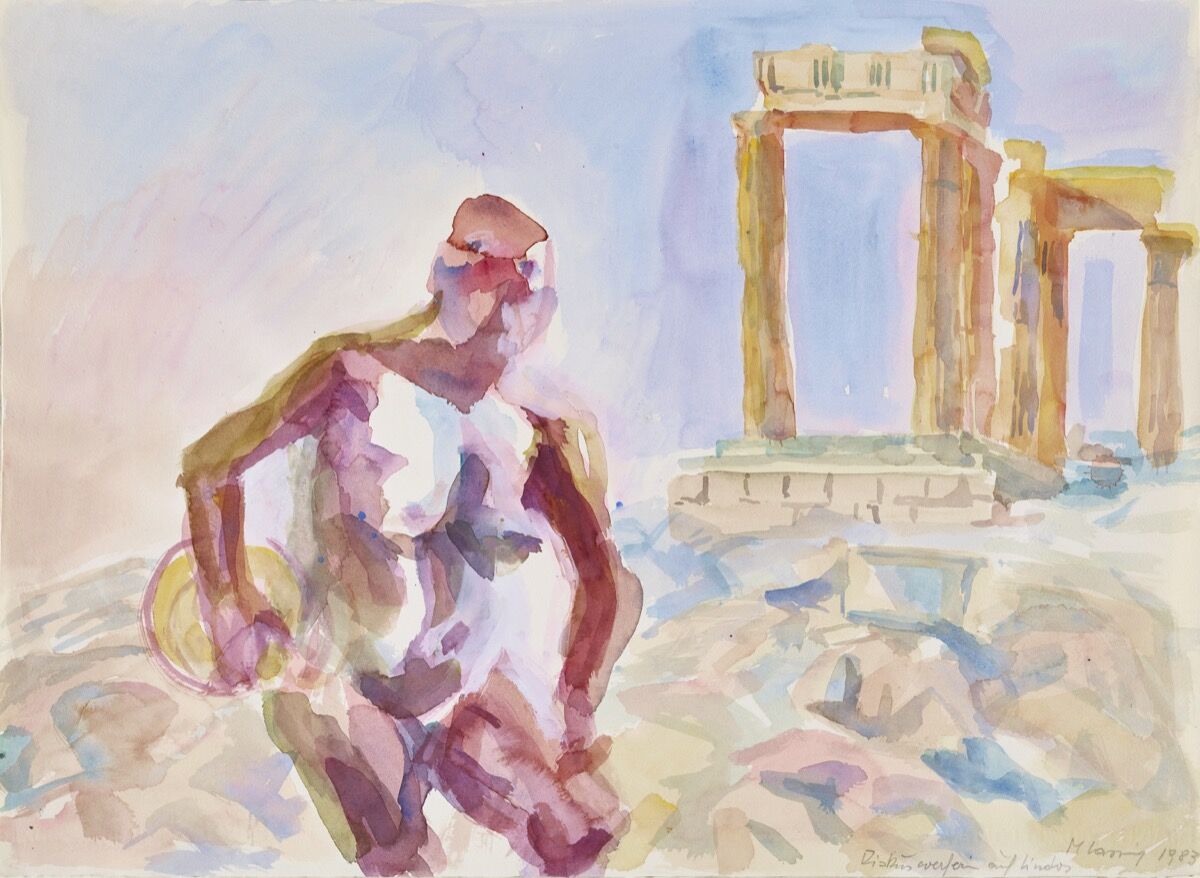 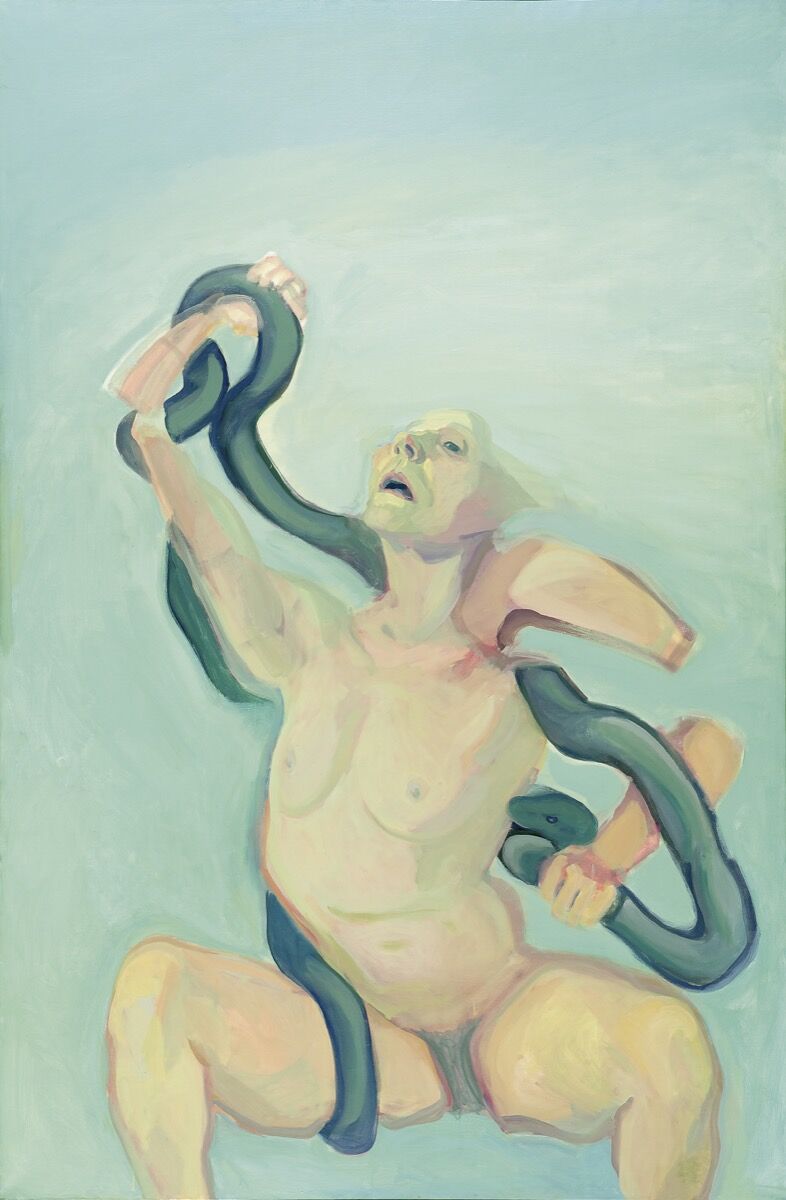 Obrist first met Lassnig when he was a teenager, but it was after her 2008 exhibition at the Serpentine Gallery in London that the two discussed this interest, and the artist mentioned the many watercolors she’d produced in Greece beginning in the early 1980s.
“There were hundreds, maybe thousands, of these watercolors, and they’d never before been shown,” said Obrist, describing some of his last conversations with the artist, whose wish was to show them in the country in which she produced them. “She visits antiquity not nostalgically, but in an almost futuristic way,” he said.
Not all of the works on paper see Lassnig feminizing Greek myths. She also depicts herself in more conventional scenarios, highlighting the dissonance between Greece’s classicism and its current tourism-driven economy.
Yet even these images play with perception and proportion. In Ear of Santorini (1996), you see Lassnig’s wildly oversized head tipped into the sea, as if listening for aquatic secrets, while in The Prophetess (1983), we see a nude female figure, rendered in dark colors, sitting before the ruined columns of a temple on Rhodos.
Anchoring the exhibition is the large-scale painting Woman Laocoon (1976), one of her earlier references to Greece and, one can surmise, a point of departure into her mythological explorations.
The subject of the painting, Laocoon, was Apollo’s seer who warned the Trojans against accepting the giant horse left by the Greeks. His warnings went unheeded. Here, Lassnig’s female Laocoon fends off one sea serpent (not two), which attempts to crush her. Lassnig’s figure, which is a version of herself, appears on a sea-green background with a look that could express horror or ecstasy.
Lassnig’s work became increasingly abstract into the late ’80s and ’90s, and a number of other paintings from this period see her transplanting Hellenic myths into Austrian landscapes.
“She would carry the Greek imaginary and transpose it onto the lake near where she painted in the summers,” says Obrist. 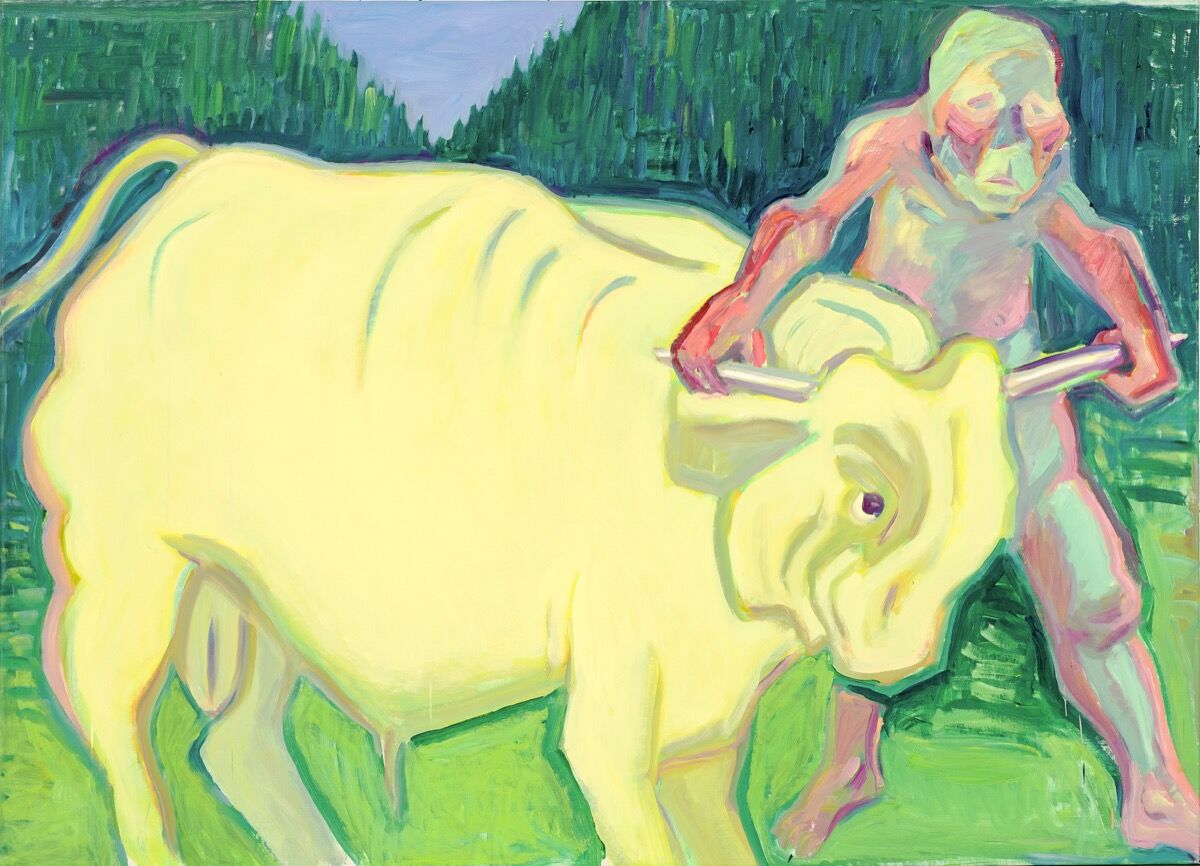 Advertisement
In Take the Bull by the Horns (mid-1980s) and Myself as Alpine Cow (1987), her minotaur hits the Alps, while in Wörtersee Nymphs (2011), she places abstracted, almost fetal nymphs into the Wörtersee, a lake in southern Austria.
Lassnig’s groundbreaking, unapologetic feminism and “body awareness”—a term that she coined—is everywhere in this exhibition. Her self-portraits place the artist, perhaps as a prototypical female, into the Western canon’s ancient stories, taking liberties with concepts of power and victimhood, and exposing the tensions between (wo)man and nature with a wry, bold, and timeless wit.
As Obrist notes, these works have an almost science fictional quality. Unlike parts of documenta 14, this exhibition feels like it belongs here, the artist’s foray into Greece reflecting its literal landscape as well as Lassnig’s explorations of identity—the archipelago serving as a metaphor for the networked, multinodal world we now live in.
—Kimberly Bradley
Related Stories