What Happened to the Catholic Church’s Art Patronage 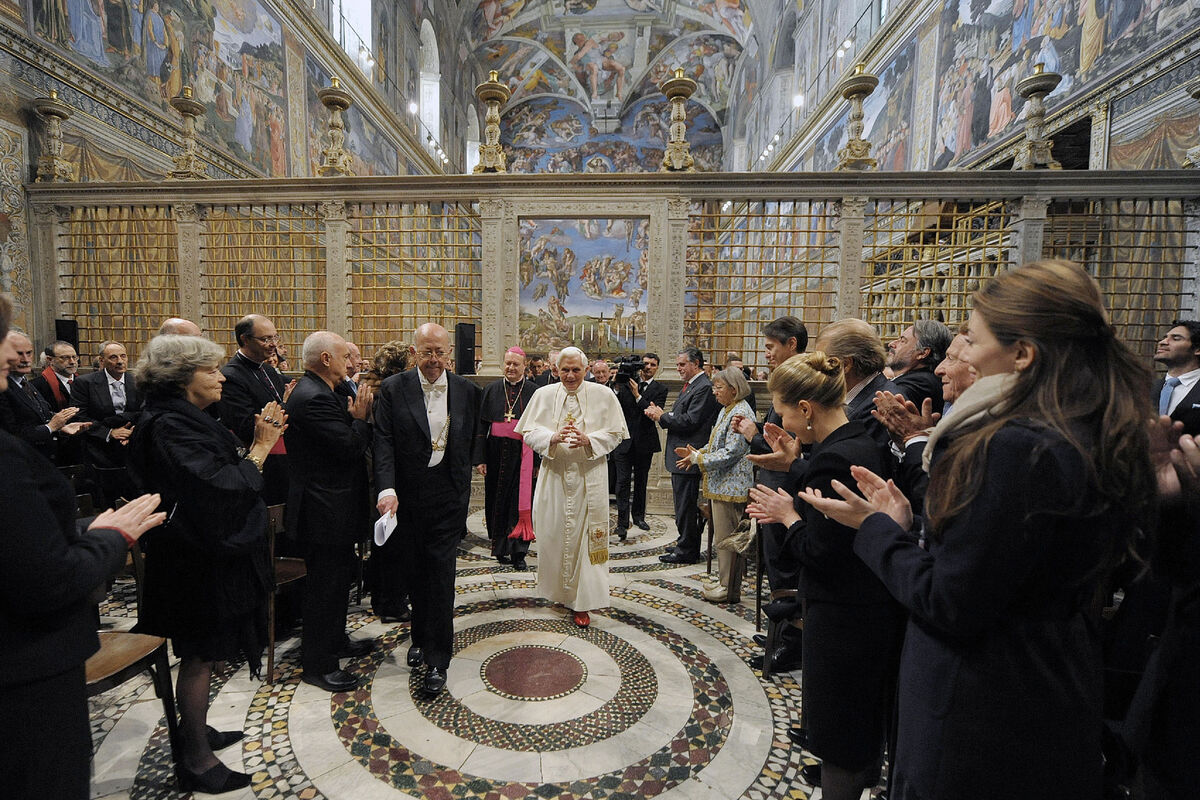 Pope Benedict XVI attends a meeting with over 500 artists at the Sistine Chapel, 2009. Photo by L'Osservatore Romano/The Vatican-Pool/Getty Images.

Amid the Christmas celebrations at the Vatican last month, four artists working in St. Peter’s Square transformed 720 tons of sand into a sweeping, 52-foot-wide nativity scene. Impressive though the result was—a sculptural triptych with Jesus, Mary, and Joseph flanked by an angel, farm animals, the three wise men, and some well-wishers, all rendered in granular detail—it was a far cry from the thousands of treasures hanging nearby in the Vatican’s towering basilica and the complex of museums beyond.
For centuries, the Catholic Church was one of the world’s most important collectors and patrons of art, but in recent decades, the Vatican’s holiday nativity scene has often been one of its most high-profile artistic contributions. This shift didn’t happen overnight—or even in a generation—but across centuries, and it is inseparable from the evolution of modern European nations, the secularization of public life, and the rise of the art market. 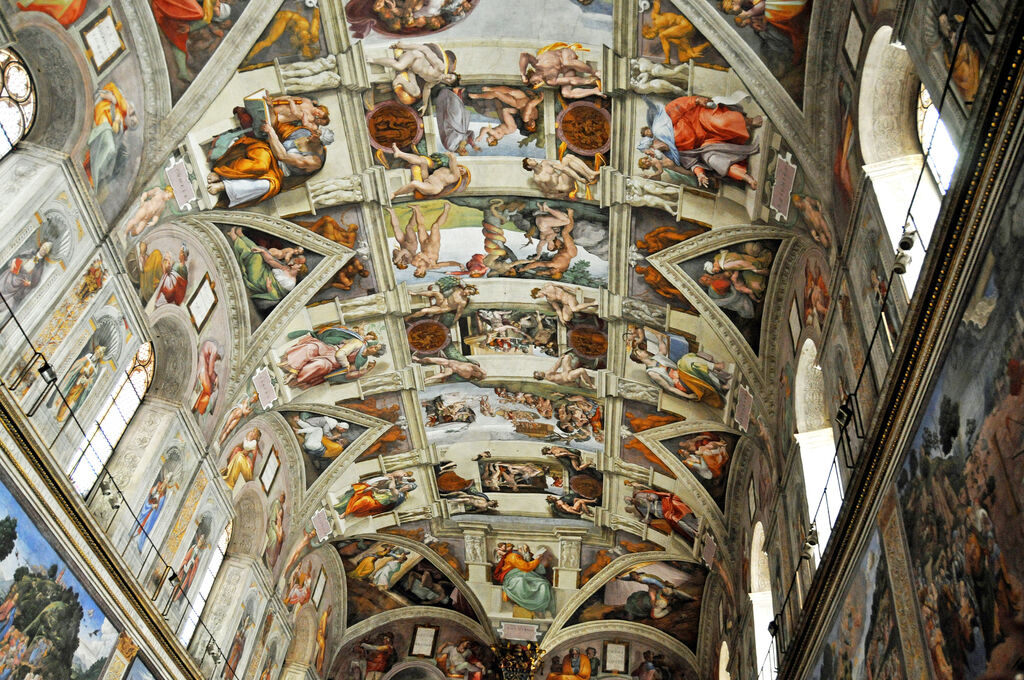 Michelangelo Buonarroti
Sistine Chapel Ceiling Frescoes, 1508-1512
Art History 101
“During the Renaissance, the [Catholic] Church was at the height of its political power in Europe,” said Dugan McGinley, a religious studies professor at Rutgers University, explaining that church patronage throughout the ages is inseparable from contemporaneous shifts in political power. “Commissioning works of art served to bolster its influence in the political realm. Religion and state were deeply intertwined at this point in Western history.”
But as the functions of church and state began to grow apart, giving rise to more modern forms of government, the Catholic Church began to lose its central place in many Western societies. This had a direct impact on the church’s ability to raise money, and its budget for arts patronage took a hit.
“The local municipalities or national states took more and more of the right of taxation away from religious orders and national churches, giving them less wealth to work with,” said Elayne Oliphant, an assistant professor of anthropology and religious studies at New York University. In other words, the Catholic Church’s scaling back of its arts patronage wasn’t necessarily a choice, but rather “the result [of] shifting relations of power between and within states.” 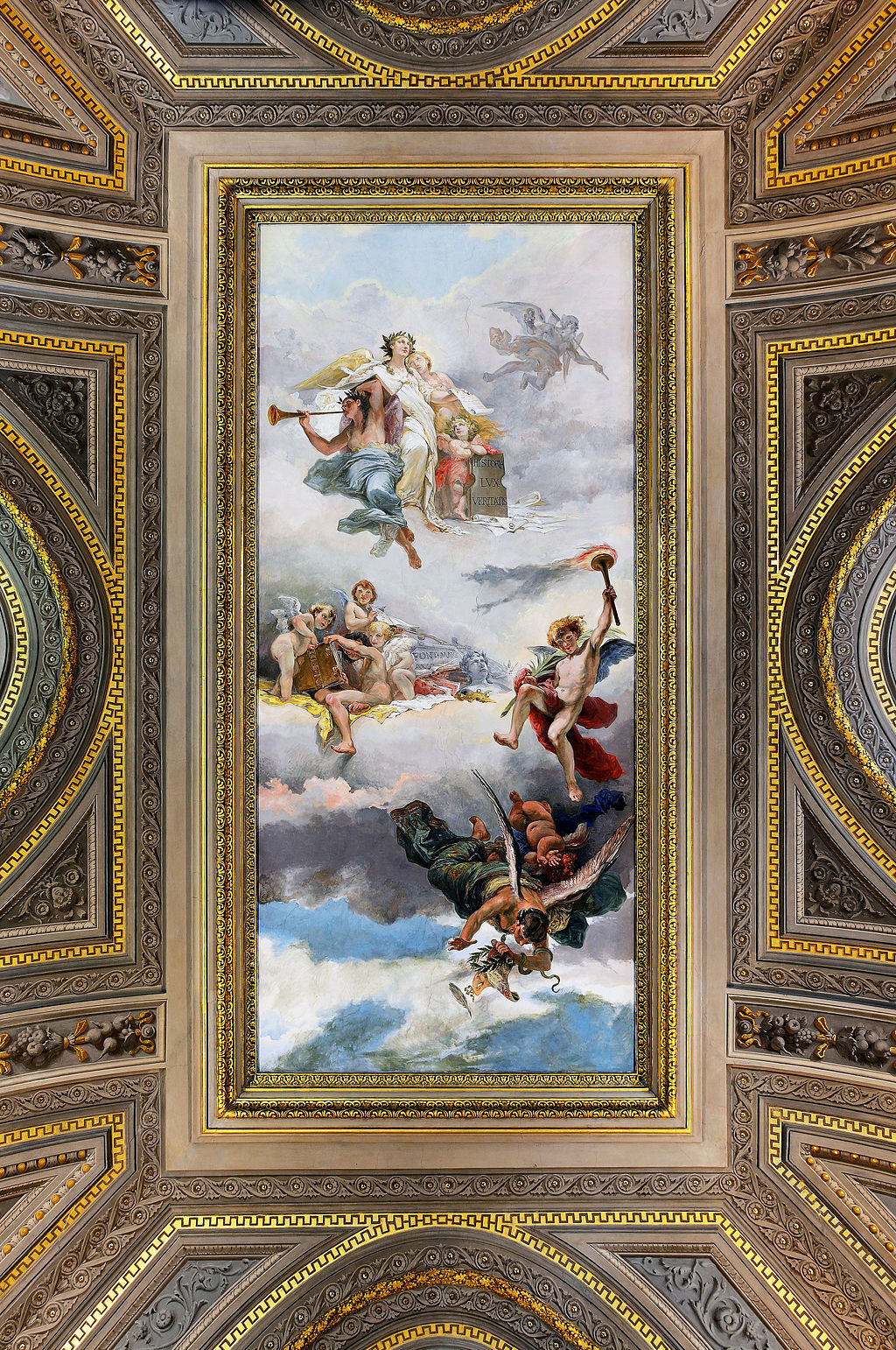 Ceiling in the Vatican Museum. Photo by Livioandronico2013 via Wikimedia Commons. 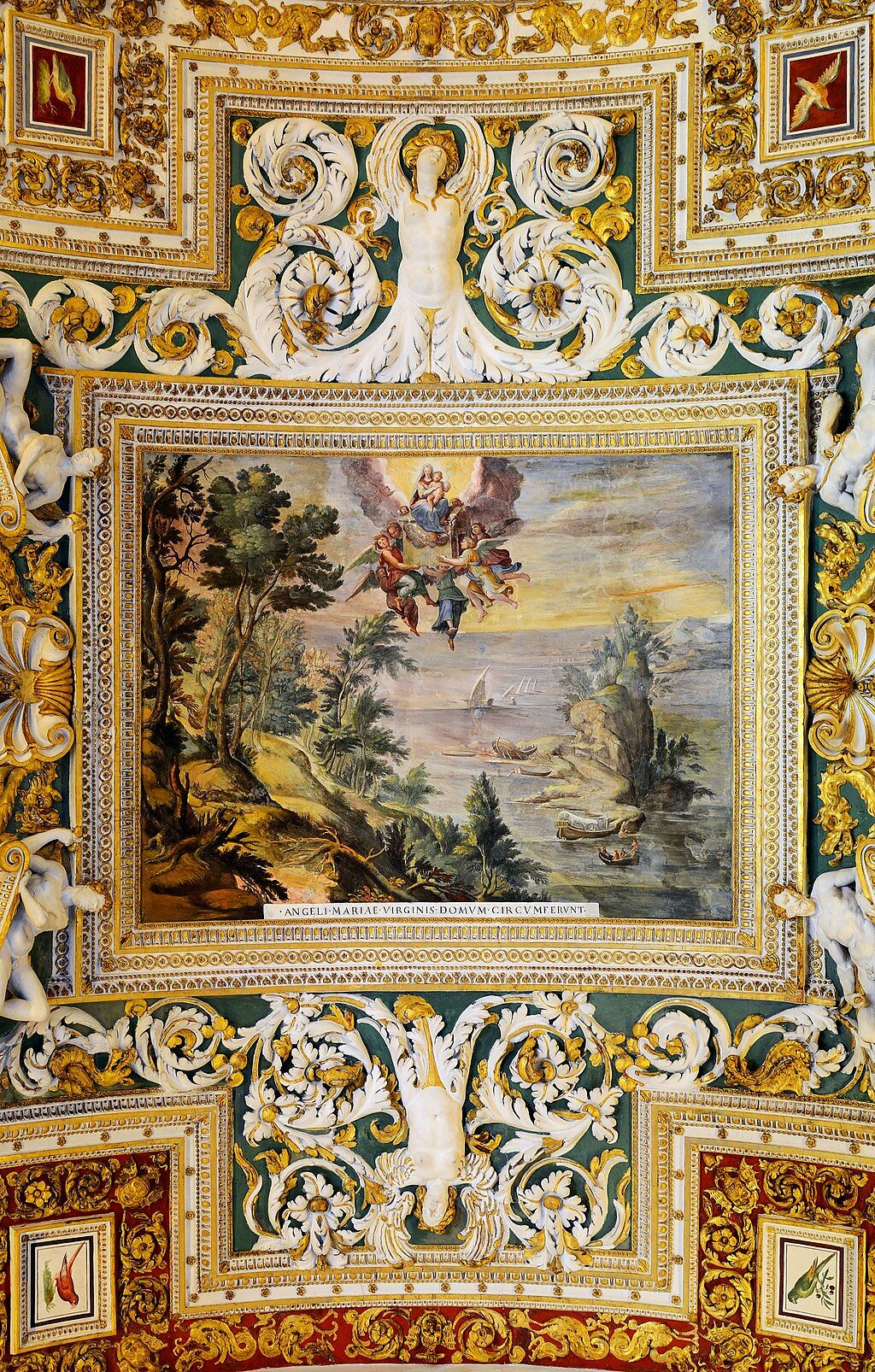 Ceiling of the Maps Room in the Vatican Museum. Photo by Livioandronico2013 via Wikimedia Commons.

Advertisement
Factors such as the Protestant Reformation movement and changing economic and political models further weakened the Catholic Church’s position, significantly shrinking its role in many arenas of life, including culture, during the first half of the 16th century. But in the middle of the 16th century, the tide shifted back in the church’s favor. The Counter-Reformation movement that lasted into the middle of the 17th century saw a resurgence of Catholic fervor throughout Europe, and its cultural manifestation was
Baroque
art.
“It was during this period that the nudes in the Sistine Chapel were critiqued and covered, but when the church also acted as a powerful patron, demanding the creation of images that emphasized Catholic doctrine,” said Oliphant. “So while the Protestant Reformation critiqued excesses of wealth and opulence in churches and art, in many ways, the Catholic Church replied by further emphasizing the richness and beauty of art.”
This championing of more extravagant religious art extended beyond paintings, sculptures, and architecture to also include the ceremonial robes and jewels worn by the clergy. For instance, many of the opulent outfits loaned by the Vatican for last year’s exhibition “Heavenly Bodies: Fashion and the Catholic Imagination” at the Metropolitan Museum of Art’s Costume Institute dated from the 18th, 19th, and early 20th centuries.
“Just at the point when nation-states were taking over the rights of taxation, were expropriating church properties, and capitalism was expanding rapidly throughout Europe, the Vatican again sort of doubled-down in its use of art to celebrate its power,” Oliphant said. 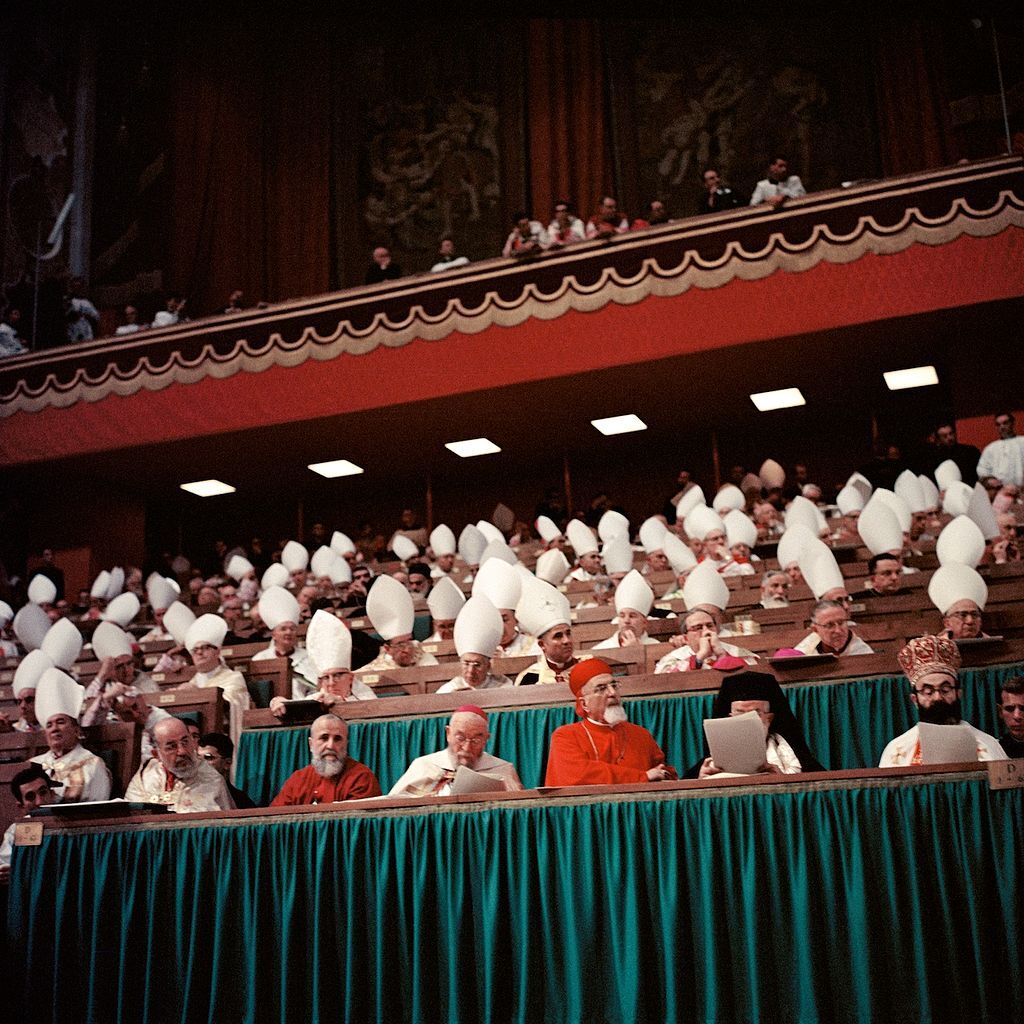 The Baroque era was, however, the last one in which the Catholic Church was able to throw significant weight (and money) around in the art world. As many Western countries transitioned into modern industrial states and adopted new economic models, the Vatican saw its role as a patron and promoter of art shrivel, while the art market expanded.
“The rise of capitalism further removed capital from the hands of the [Catholic] Church, as more and more of it circulated through the market rather than being held within institutions,” said Oliphant.
So, for many decades—especially in the first half of the 20th century—the Catholic Church was minimally involved in commissioning new art. One of the Vatican’s priorities in this period was acquiring art and antiquities for its museums, and significantly building out and modernizing those institutions. During World War II, the Vatican Museums closed to the public and served as a storage depot for safekeeping art from Italy’s war zones.
In the second half of the 20th century, and during the Second Vatican Council (or simply Vatican II) in the 1960s, the church encouraged a break with the aesthetics of its last great artistic hurrah, the Baroque. Instead, Vatican II called for “a general ‘simplification’ of art, architecture, and music in Catholic churches,” McGinley said. A 1977 document offering guiding principles for church architecture and ornamentation stated that “the attempt to recover a solid grasp of Church and faith and rites involves the rejection of certain embellishments,” “a simplifying and a refocusing on primary symbols,” and “more austere interiors, with fewer objects on the walls and in the corners.”
In the midst of Vatican II, the newly-instated Pope Paul VI made a plea to artists. On May 7, 1964, he held a meeting with contemporary artists in the Sistine Chapel, calling for a rapprochement between the Catholic Church and the art world to reinvigorate the rigid conventions of religious art. The pope implored the artists: “We must again become allies.” Nine years later, he inaugurated the Vatican’s Collection of Modern Religious Art (now called the Collection of Contemporary Art), which includes more than 8,000 modern and contemporary artworks, and has been assembled largely through donations and gifts from collectors, artists, and an assortment of public and private organizations. It includes works by
Vincent van Gogh
,
Henri Matisse
,
Giorgio de Chirico
,
Lucio Fontana
, and even
Francis Bacon
.
Since Paul VI’s meeting with the artists in 1964, and especially over the last three decades, the Catholic Church has made small but not insignificant efforts to rekindle its role as a patron of the arts beyond Vatican City.
“Since the 1990s, there has been some rethinking of that simplicity and a call for a return to a more important pride of place for the arts in Catholic liturgy,” McGinley said. This has been accompanied by a deviation from Vatican II’s mandate for an aesthetics of austerity.
In in a letter to artists in 1999, Pope John Paul II seemed to advocate for an aesthetic of maximalism, in hopes of inspiring awareness of “the sacredness of life and of the human person” in the viewer. “Artists of the world,” he wrote, “may your many different paths all lead to that infinite Ocean of beauty where wonder becomes awe, exhilaration, unspeakable joy.” If not exactly a call for a return to the Baroque, it certainly suggested a renewed awareness of art’s capacity to articulate the dogma to Catholics and nonbelievers alike.

Blessed are the artists 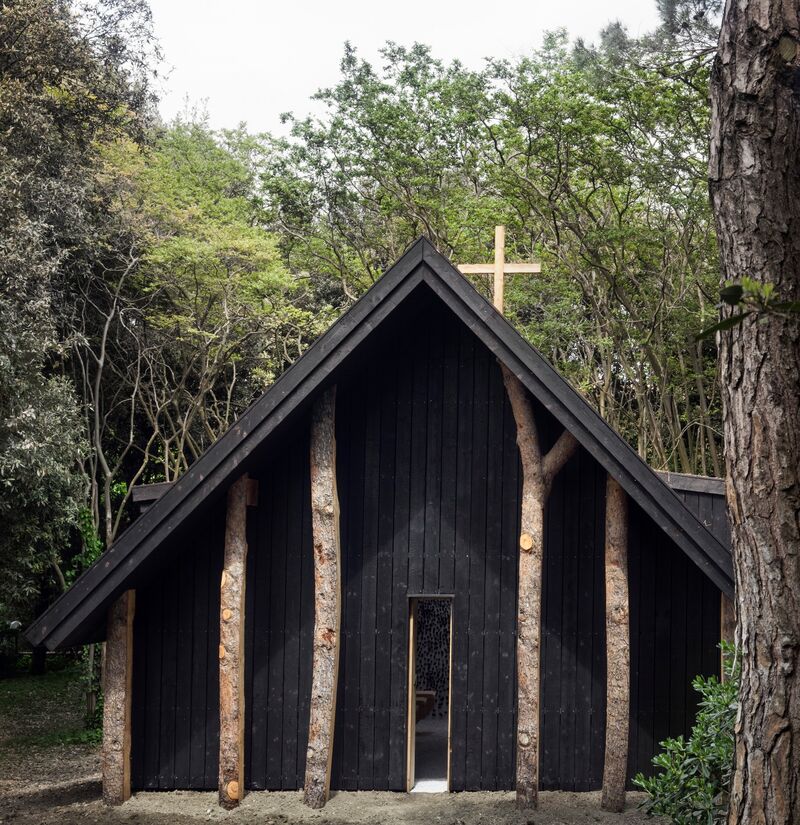 In 2009, Pope Benedict XVI reiterated Paul VI and John Paul II’s calls for artists, hosting more than 250 cultural figures beneath
Michelangelo
’s famous Sistine Chapel frescoes on November 21st. Among those in attendance were architects
Zaha Hadid
and
Daniel Libeskind
; the artists
Jannis Kounellis
,
Bill Viola
, and
Anish Kapoor
; and Spaghetti Western score composer extraordinaire, Ennio Morricone. Benedict XVI made what he termed “a cordial, friendly, and impassioned appeal” to the artists in attendance to pursue “a quest for beauty.”
Around the time of Benedict XVI’s 2009 conference with artists, the Vatican put some money behind its claims of supporting contemporary art and announced that it would participate in the Venice Biennale for the first time. In 2013, the inaugural pavilion of the Holy See at the Arsenale featured works by three artists—Australian-American painter
Lawrence Carroll
, Czech-French photographer
Josef Koudelka
, and Milanese design collective Studio Azzurro—and was curated by Antonio Paolucci, the director of the Vatican Museums at the time. Rather than including images of Christ or referencing scenes from the New Testament, the exhibition took a gentle approach to Catholic themes by hinting at concepts “fundamental for culture and for church tradition,” as Cardinal Gianfranco Ravasi, president of the pontifical council for culture, told The Guardian.
At the biennale’s next edition, in 2015, Micol Forti curated a Vatican pavilion organized around the prologue to the Gospel of John under the title “In the beginning…the word became flesh.” The show featured Colombian artist
Monika Bravo
, Macedonian sculptor
Elpida Hadzi-Vasileva
, and Mozambican photographer
Mário Macilau
. Hadzi-Vasileva perhaps best captured the theme’s juxtaposition of the ethereal and the bodily with her installation Haruspex (2015), which consisted of a hanging, church-like installation made from the linings of pig guts, ropes of sheep intestines, and a cow stomach.
Also in 2015, the Vatican made a showing at the world’s fair in Milan, commissioning a dramatic pavilion by Italian firm Quattroassociati. And last year, the papal state returned to Venice to participate for the first time in the city’s architecture biennale, commissioning 10 architects from around the world to create pop-up chapels.
Still, despite these recent efforts—and the annual drama of its nativity scene in St. Peter’s Square—the Vatican’s role in arts patronage is a far cry from what it once was. Pope Francis won’t be commissioning
David Adjaye
to design the world’s largest cathedral—with, say, stained glass windows by
Nina Chanel Abney
, a pipe organ by
David Byrne
, and the Stations of the Cross rendered by
Nicole Eisenman
—anytime soon. And if he ever does, it likely won’t be built anywhere near the Vatican. While Catholicism was still a predominantly European religion during the church’s last great age of arts patronage in the Baroque era, that is no longer the case, with more than 40 percent of the world’s 1.2 billion Roman Catholics now living in Latin America; social and demographic changes of the last century would presumably influence the aesthetics of whatever new art the Catholic Church might commission.
“The most populous Catholic countries are now in the global south,” McGinley said, “so any future influence in or from the artistic realm will likely reflect new cultures than we have not traditionally associated with Catholic art.”
Benjamin Sutton is Artsy’s Lead Editor, Art Market and News.
Related Stories