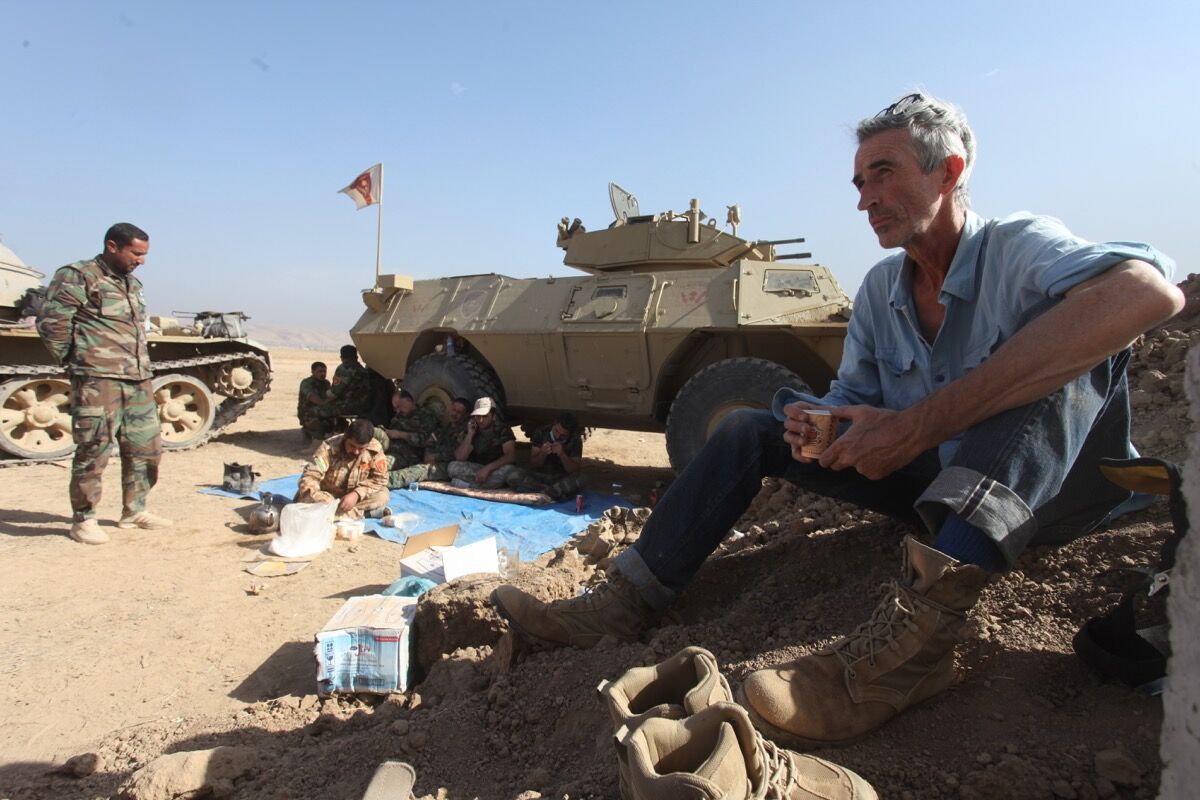 In the fall of 2016, the Belgian-born, Mexico-based artist
Francis Alÿs
spent nine days embedded with Kurdish Peshmerga forces outside Mosul, Iraq. He accompanied the soldiers along a 23-kilometer frontline, which the artist describes as “a hill moving slowly into the outskirts” of the city. Now, the works that Alÿs made as a result of this uncommon (and uncommonly dangerous) experience are the highlight of the Iraqi Pavilion at this year’s Venice Biennale.
The day I spoke to Alÿs about his time at the Battle of Mosul, the Iraqi Army announced that the ongoing offensive would be over by the start of Ramadan in late May. If their prediction bears out, it’ll mark the end of what has been dubbed “the Mother of all Battles,” the most brutal campaigns in the fight against ISIS in Iraq. Spearheaded by Iraqi forces, with the support of a U.S.-led international coalition, Mosul has been a theater of extreme violence: Human shields, mass graves, and decapitations have regularly made the headlines. Since the beginning of ISIS occupation in 2014, the population of the country’s second city has dropped from 2.5 million to as low as 600,000 two years later. The figures are hazy, and so are the politics, which involve national and tribal factions whose volatile dynamics predate the bloody rise of the self-declared Caliphate.
Commissioned by the Ruya Foundation, the Iraqi Pavilion exhibition in Venice is articulated around the notion of the archaic. It features an extraordinary collection of ancient Middle Eastern artifacts recovered after the 2003 looting of Baghdad’s National Museum, paired with works by contemporary Iraqi artists—the ensemble gesturing towards a lineage running from the Neolithic to the digital age.
Alÿs’s contribution comes at the end of the show, a little separated from the rest. It very much captures the reality of life on a battleground, protected from ISIS fighters by a simple mound of dirt. The pièce de résistance is a 5-minute video (Untitled, Mosul, Iraq, 31 Oct 2016). We see a tank, a military tent, and an armed vehicle slowly passing by. Soldiers mill around, waiting; a bomb detonates off-screen. In the foreground, a hand dabs small dollops of paint on a white palette, then spreads the pigments out with a brush. The beiges, ochres, and burnt oranges—echoing the colors of the dusty earth, and the soldier’s uniforms—fleetingly appear on the board’s surface, capturing something of the scene’s chromatic mood. Then the hand grabs a rag and wipes everything off. The process repeats, over and over. 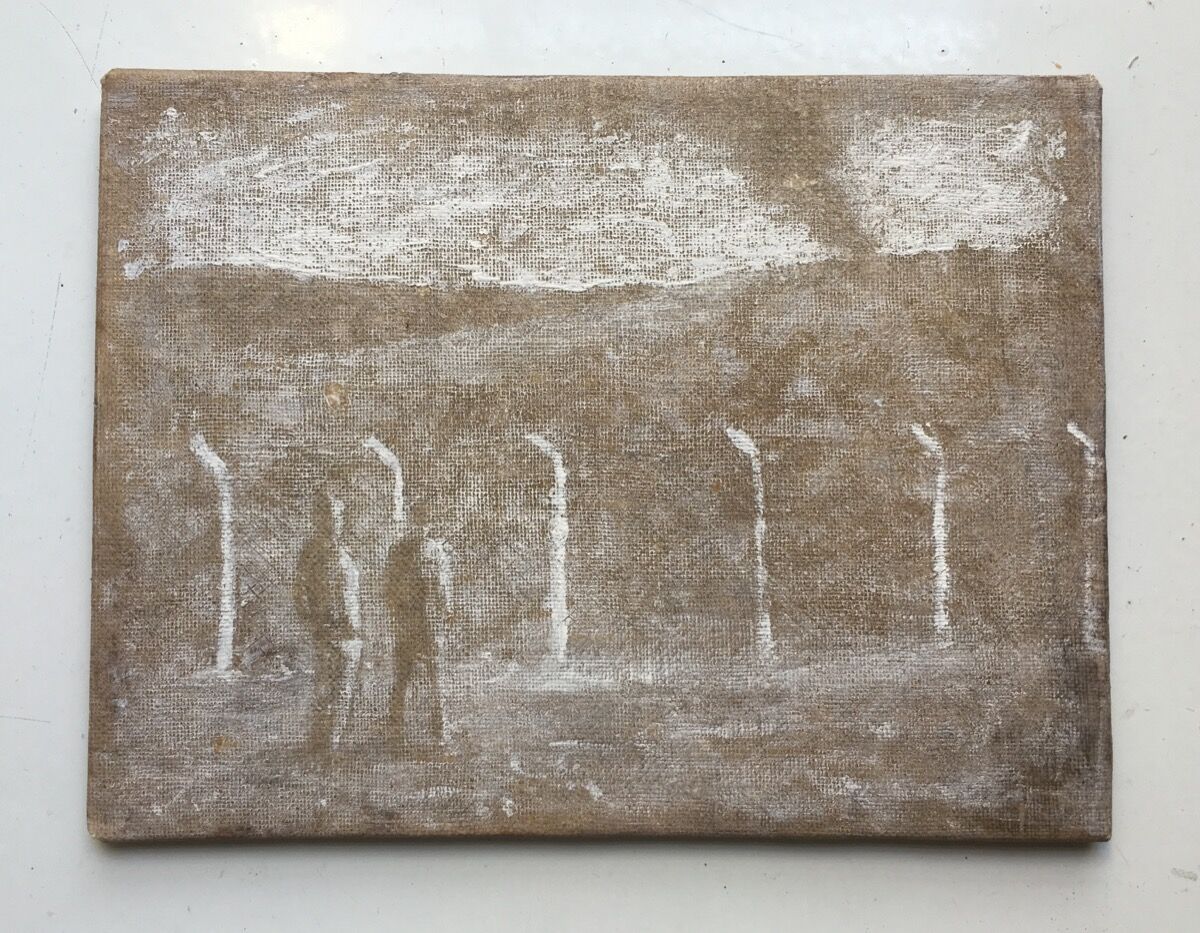 Francis Alÿs, Untitled (from the Mosul series), 2016. Courtesy of the artist and Ruya Foundation. © Francis Alÿs. 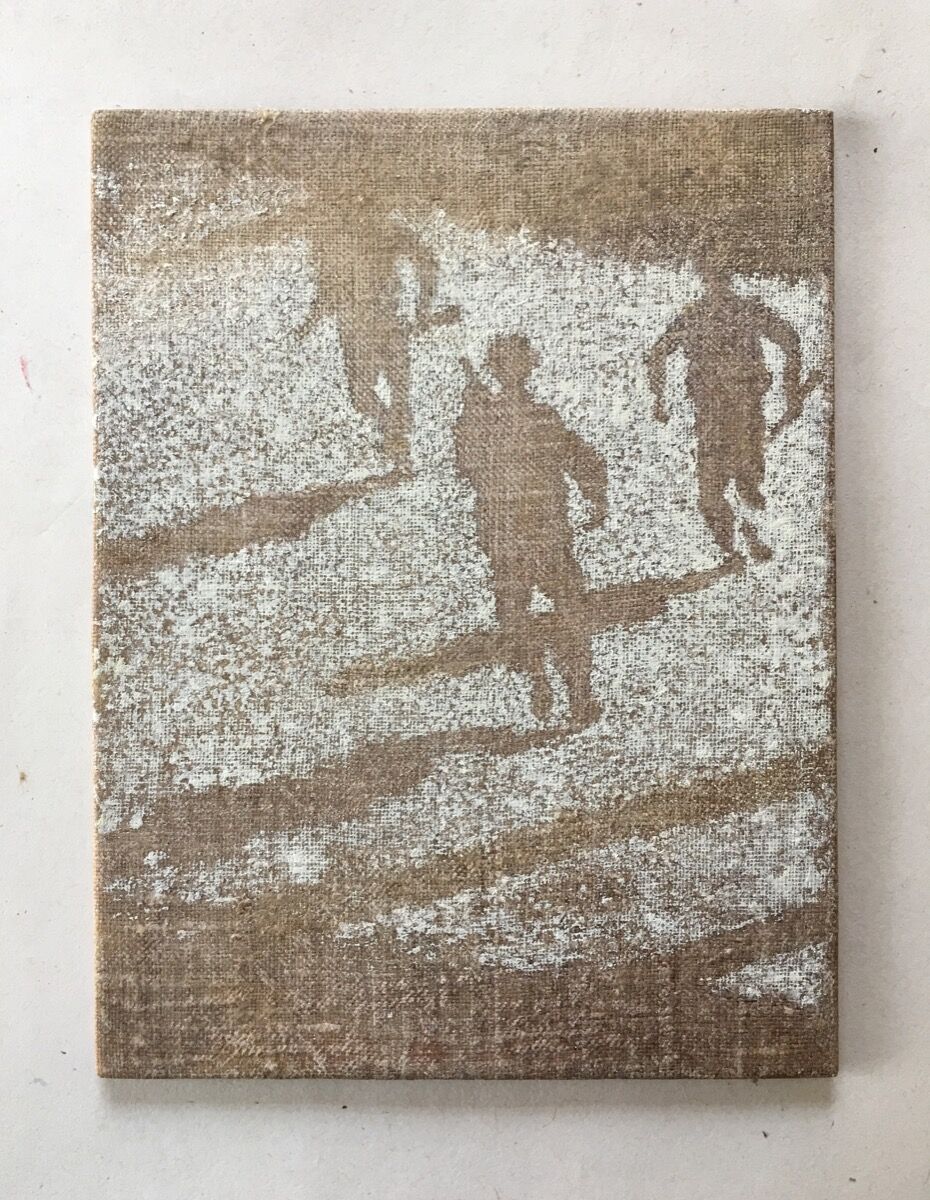 The question of art, of its role and relevance in the context of war, announces itself. It’s easy to interpret Alÿs’s gesture as a Sisyphean attempt to create an image that would do justice to the situation, and a simultaneous acknowledgement of the inability to do so.
But as the artist tells it, his ambition was even more modest. His goal was simply “to match the colors of the scene,” he tells me when I meet him at Palazzo Cavalli-Franchetti, which hosts the Iraqi Pavilion. “Then I erase it because all I want to do is to find a moment of coincidence between my persona, or my activity, and the scene I’m looking at.” He adds: “The question is really about the role of the artist as a witness. What can the artist say that hasn’t been said by media?”
This understated approach forms Alÿs’s trademark. For The Green Line (2004), the artist focused on the highly charged frontier drawn on a map by Israeli commander Moshe Dayan to demarcate the Jerusalem territory under his control at the time of the 1948 ceasefire. The artist walked its entire length, lime paint trickling from a pierced can as he meandered through neighborhoods which are now firmly in territory claimed by Israel.
In Afghanistan, Alÿs separately filmed a British and a Taliban soldier putting together their guns, and then taking them apart. Shown on a split screen in an unsettling game of mirrors, the video bears a title that foreshadows the artist’s work in Mosul: Sometimes Doing Is Undoing and Sometimes Undoing Is Doing (2013).
While his Mosul video appears to stage his somewhat fraught relationship to image-making, the artist nonetheless did manage to produce completed paintings based on his time in Iraq: a set of small canvases whose subjects emerge, as if in negative relief, from the raw linen ground. Chalk-white silhouettes walk back from the horizon; men run clutching guns; two figures look at the bare field beyond a camp’s barbed wire fence. At times, the hazy images are so faint that they threaten to disappear. They have the fleeting quality of impressions gathered in haste, their sparse details adding up to an abstracted notion of war. 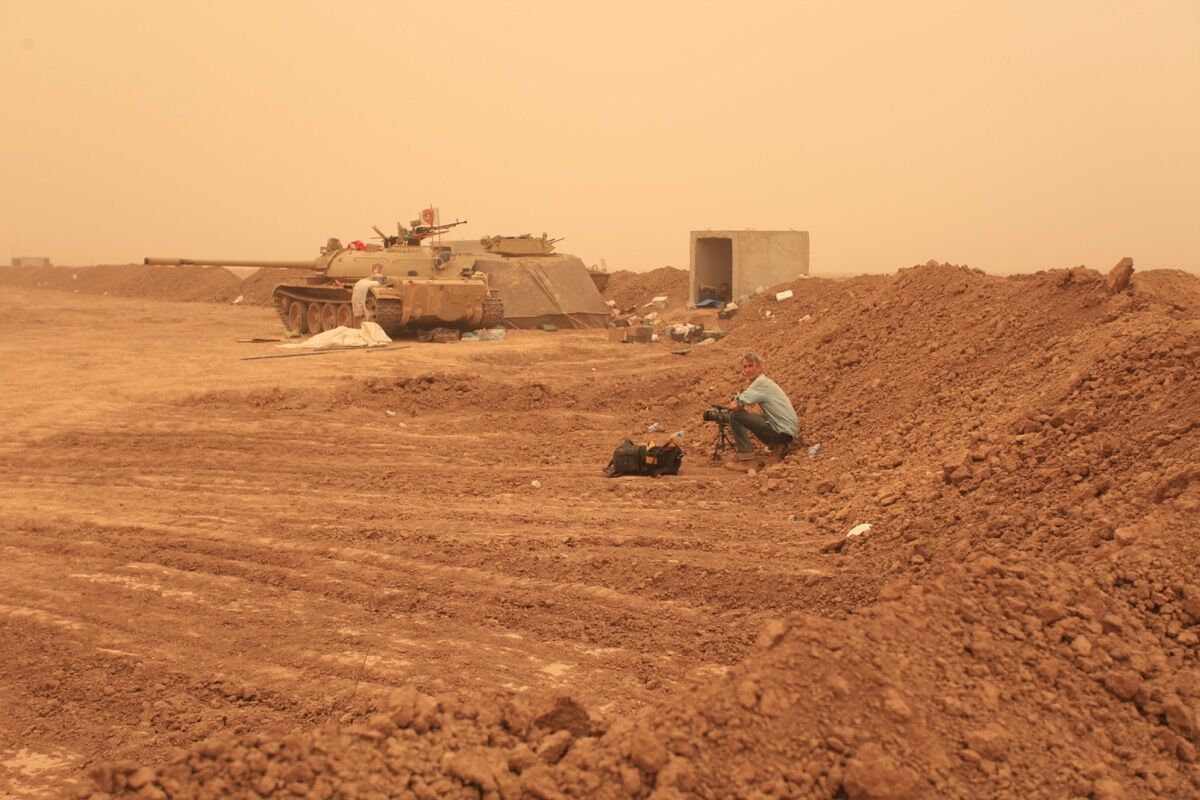 Advertisement
“When I was there, I was stunned and very dependent on the way the things were moving,” Alÿs admits. “[The Peshmerga soldiers] were very politely dragging me around, but my level of initiative was minimum—and that was OK, that was our contract.” He pauses, then adds: “The only restriction is that you have to try to remember which side you are on. The rules were pretty basic: always stick to the line.”
That line wasn’t always straightforward, though. Alÿs’s car once got lost in a snowstorm; he found himself in enemy territory, in a field of rubble within easy range of ISIS snipers. “My instinctive reaction was to look at it through my iPhone,” he recalls. “It made it much more bearable. It was like a fictionalization of the reality of the situation I was in.”
Likewise, canvas and video camera provided the artist with additional buffers, allowing one-step-removed engagement with a scene that might otherwise be too difficult to process.
When I ask Alÿs how he dealt with his position as an army-embedded Westerner in a Middle Eastern war—a position that, given the region’s recent history, many would see as politically conflicted—the answer is unambiguous: “I didn’t feel it was an issue there,” he says. “The main issue was the language barrier. I was clearly not a journalist, nor some sort of U.S. military advisor. They were very oblivious of my presence, if anything calling me when the food was there, and when we had to move on.” Thinking it over a bit more, he does concede that his status as a Western artist-observer “might have been a filter that limited some of my access to certain places.”
The part the West played in Iraq’s contemporary woes is, however, firmly acknowledged in Alÿs’s Venice presentation. A map showing how Britain and France split up the Greater Syrian territories with the 1916 Sykes-Picot Agreement, as they anticipated the fall of the Ottoman Empire, occupies a large table between Alÿs’s video and his paintings. Hand-drawn frontiers scar the paper, with complete disregard for the tribal alliances of the nomadic people who occupied this border-less land. The map, Alÿs says, is an attempt “to relocate where part of the problem started.”
The notion of borders has long been central to Alÿs’s practice, who permanently relocated to Mexico and has long examined complex geographies: the divide between San Diego and Tijuana; the Gibraltar Strait; the waters separating Cuba from Florida. These concerns, he notes, now seem more urgent than ever. “I was reading that we all thought 1989 was ‘the end of the wall,’” he says. “But apparently way more walls have been built since 1989 than before. It’s not an abstract concept. Borders are more and more in our lives.” He pauses. “And I think it will get worse.”
Coline Milliard
Related Stories