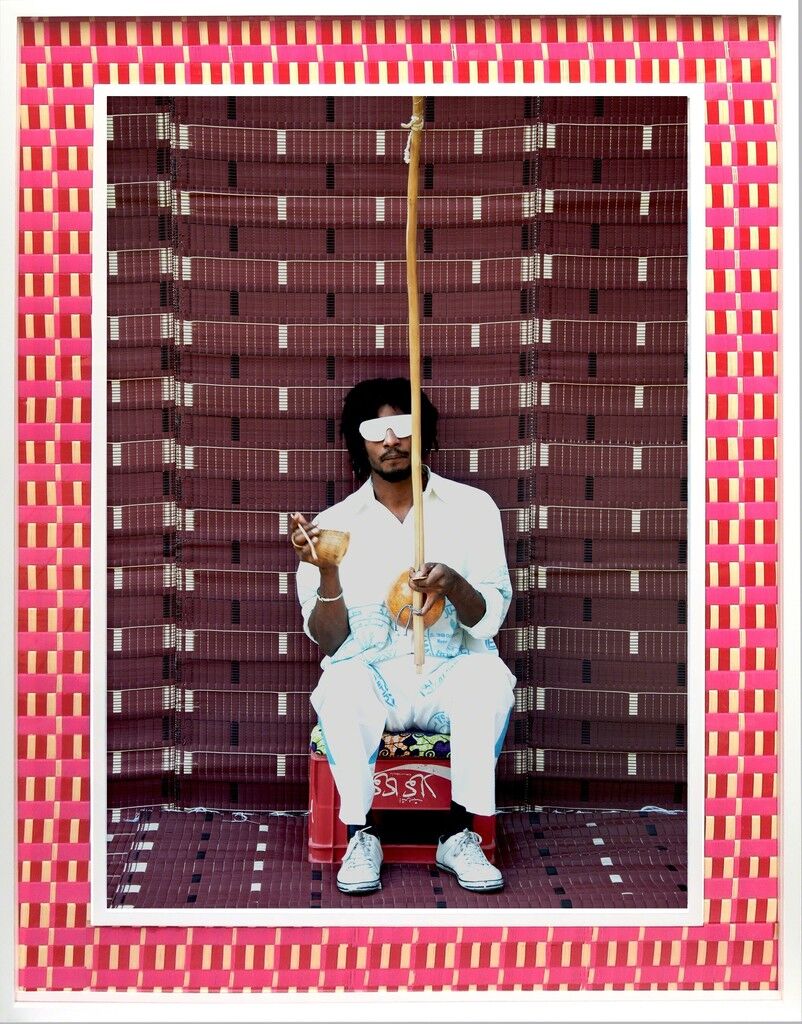 Hassan Hajjaj
Toca Feliciano, 2011
Taymour Grahne
The brightly colored, intensely patterned, eye-popping visions of photographer, designer, and filmmaker
Hassan Hajjaj
form a salon of sorts at this year’s edition of Untitled in Miami Beach. The installation, presented by Taymour Grahne, includes recent photographs (a number of which were made especially for the fair) and encourages visitors to linger, taking in every detail of his immersive, joyful works.

Hajjaj splits his time between London and Marrakesh, cities from which he derives many of his influences. London’s hip-hop and reggae scenes, North African style and culture,
Pop Art
, fashion photography, and the studio portraits of Malian photographer
Malick Sidibe
are among the sources from which the self-taught artist draws for his own work. He began photographing in the late 1980s, and has since become widely celebrated for his stunning portraits, whose sitters have included a range of musicians, performers, and other creators.
A number of Hajjaj’s portraits of creatives appear in this presentation, including one of the Nigerian singer-songwriter, composer, and performance artist Helen Parker-Jayne Isibor, of the musical collective, The Venus Bushfires. She appears seated against a backdrop of vibrantly patterned pink, orange, and green fabric, bordered by a rectangular frame of yet more patterned fabric, in hues of blue and white. As always, she is dressed gorgeously in an ensemble full of flare. Her red robe is bright and voluminous, edged in rose and printed with bold Arabic script. She wears a capacious, twisted headscarf and dark sunglasses with an exaggerated cat’s eye frame. On her lap rests her metallic drum, which she is captured in the midst of playing. Kenyan-born designer, stylist, event producer, and world culture maven Wamuhu Waweru appears, dressed to the nines, in another photograph on view. A lime green wall serves as the backdrop against which she sits, in an ensemble of variously patterned and printed clothing, topped off by a giant pink flower blossoming at the top of her head. Soda cans set into niches form the border for this celebratory portrait of a person in the fullness of her creativity, and following her own vision.
—Karen Kedmey