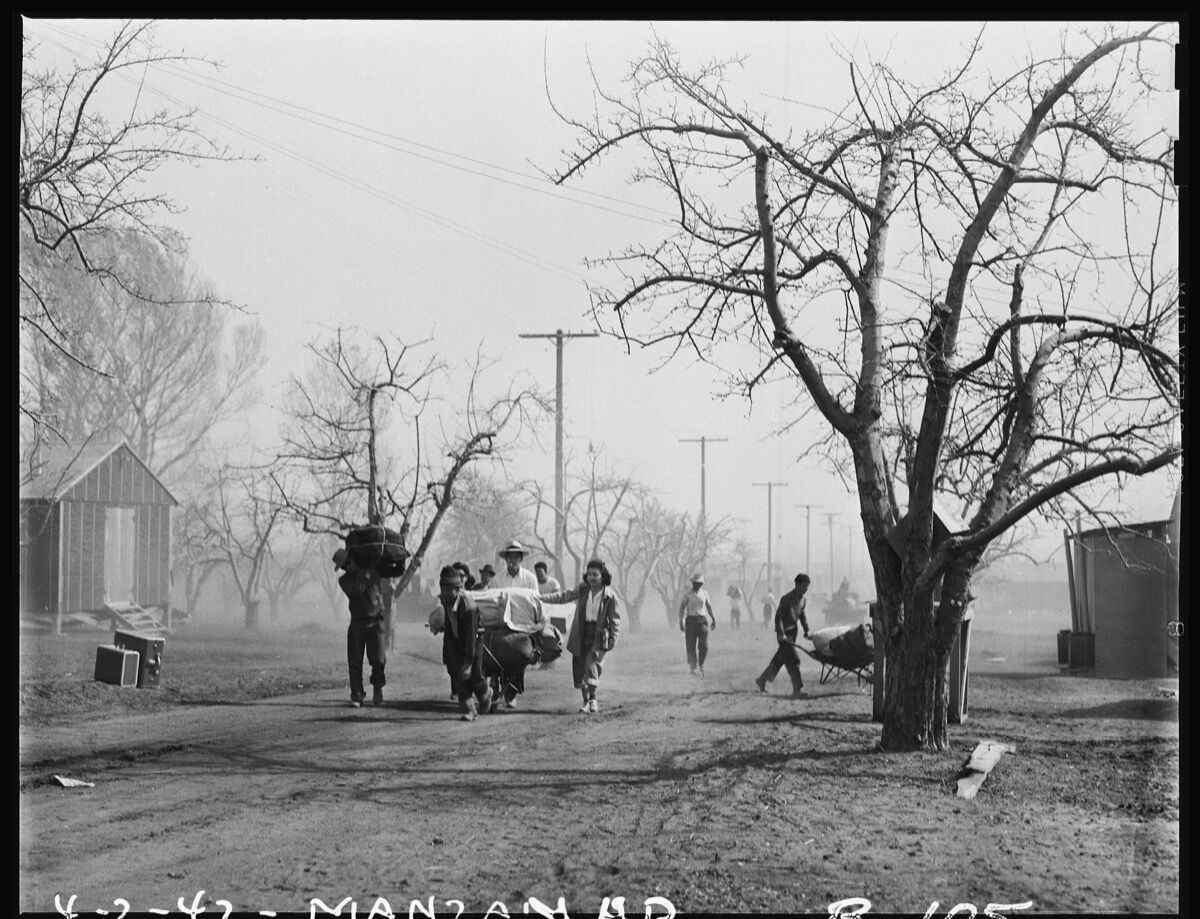 On January 27, 2017, President Donald Trump issued an executive order banning refugees and citizens of seven predominantly Muslim countries from entering the United States. In September, he announced the end of Deferred Action for Childhood Arrivals (DACA)—a program that protects young undocumented immigrants brought to the U.S. as children from deportation—giving it a cut-off date of March 5th. As battles over both issues continue to wage across the country, inciting outbursts of racism and xenophobia, a timely exhibition at the ICP Museum draws a chilling connection to a tragic era of American history.
The show, “Then They Came For Me: Incarceration of Japanese Americans during World War II,” brings together photographs documenting the involuntary detention of nearly 120,000 Japanese Americans following an executive order by President Franklin Roosevelt in 1942. (Of the individuals taken to the camps, roughly two-thirds were born U.S. citizens, the other third were legal residents, and half of them were children.)
The images show families shouldering heaps of belongings on foot, packed like livestock into the bed of farm trucks, and arriving at camps throughout the western United States surrounded by barbed wire and manned by armed guards. Together, they provide a vivid image of what displacement looks like—and what the similar erosion of civil liberties could mean for contemporary society.
4 Images
View Slideshow 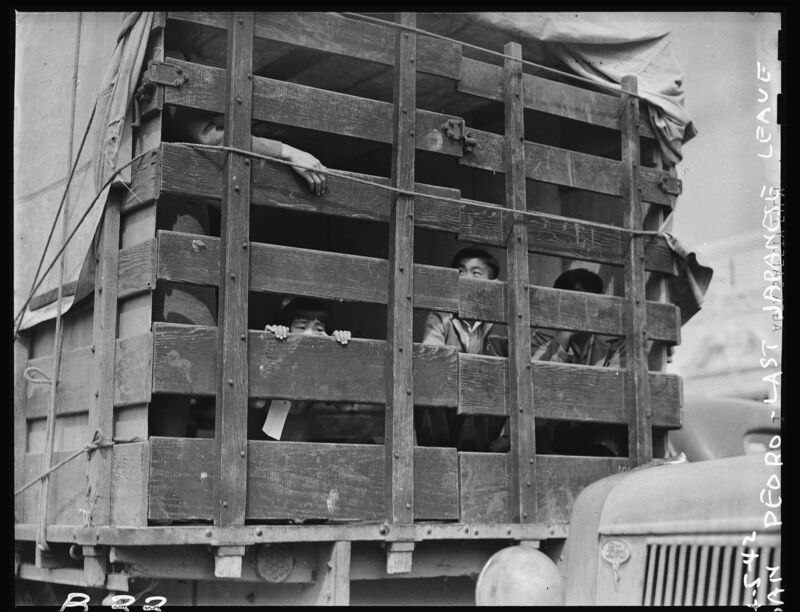 “The exhibition really arose in response to the first version of the travel ban,” said Anthony Hirschel of Chicago’s Alphawood Foundation, which debuted the show in 2017, “and thinking about what our own country has done in response to people who seem different than us, who are perceived to be a threat.”
In 1942, that alleged threat arose from wartime hysteria in the aftermath of the Japanese attack on Pearl Harbor the previous year. In response, as a supposed security measure, President Roosevelt’s executive order authorized the U.S. army to designate areas where “any or all persons may be excluded,” broad language that enabled the Japanese internment.
The federal government also hired photographers, including
Dorothea Lange
and
Ansel Adams
, to create a photographic record of the relocation effort. “They commissioned photographers basically for propaganda purposes, to show the public, international observers, and really, history, that the Japanese Americans were well-treated; that it was a humane process,” said ICP assistant curator Susan Carlson, who organized the museum’s incarnation of the exhibition. 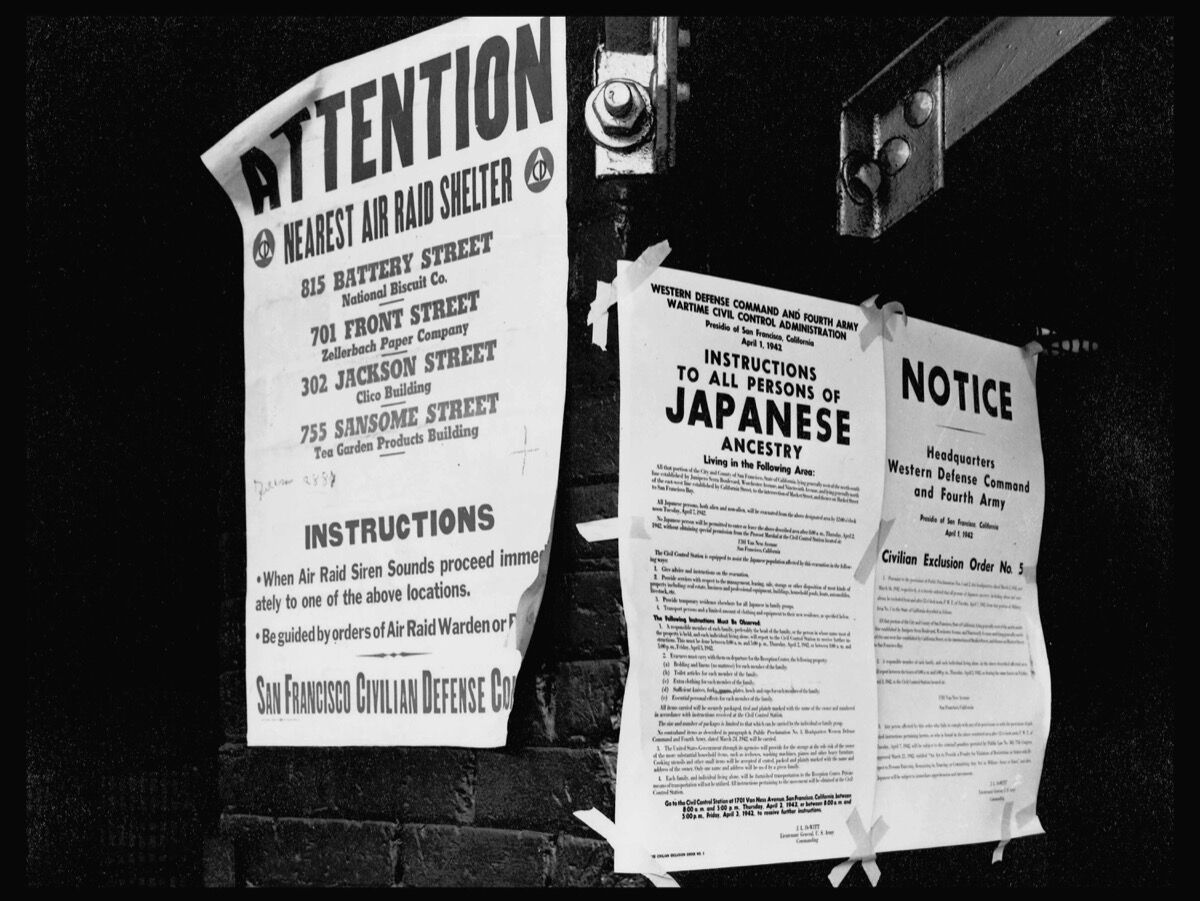 Advertisement
In doing so, however, the government inadvertently provided photographers with access and opportunity to tell the true story. There were limits, of course: “The [government] photographers were told not to photograph certain elements, like barbed wire or guard towers,” said Hirschel. Even so, as the socially conscious Lange has said, “a true record of the evacuation would be valuable in the future.” (Some of her most powerful photographs from this time were held by the military and only shared many years later, notably in a 2006 book.)
Though the photographs on view include many taken before the internment—including some that trace the long history of institutionalized racism against the Japanese in the United States before Roosevelt’s fateful executive order—the most stirring photographs begin post-Pearl Harbor. An image by Lange shows a sign taped to a San Francisco street corner offering moving instructions to “all persons of Japanese ancestry”; another, by Clem Albers, shows the steps of a Los Angeles hotel with signs advertising its new American owners. 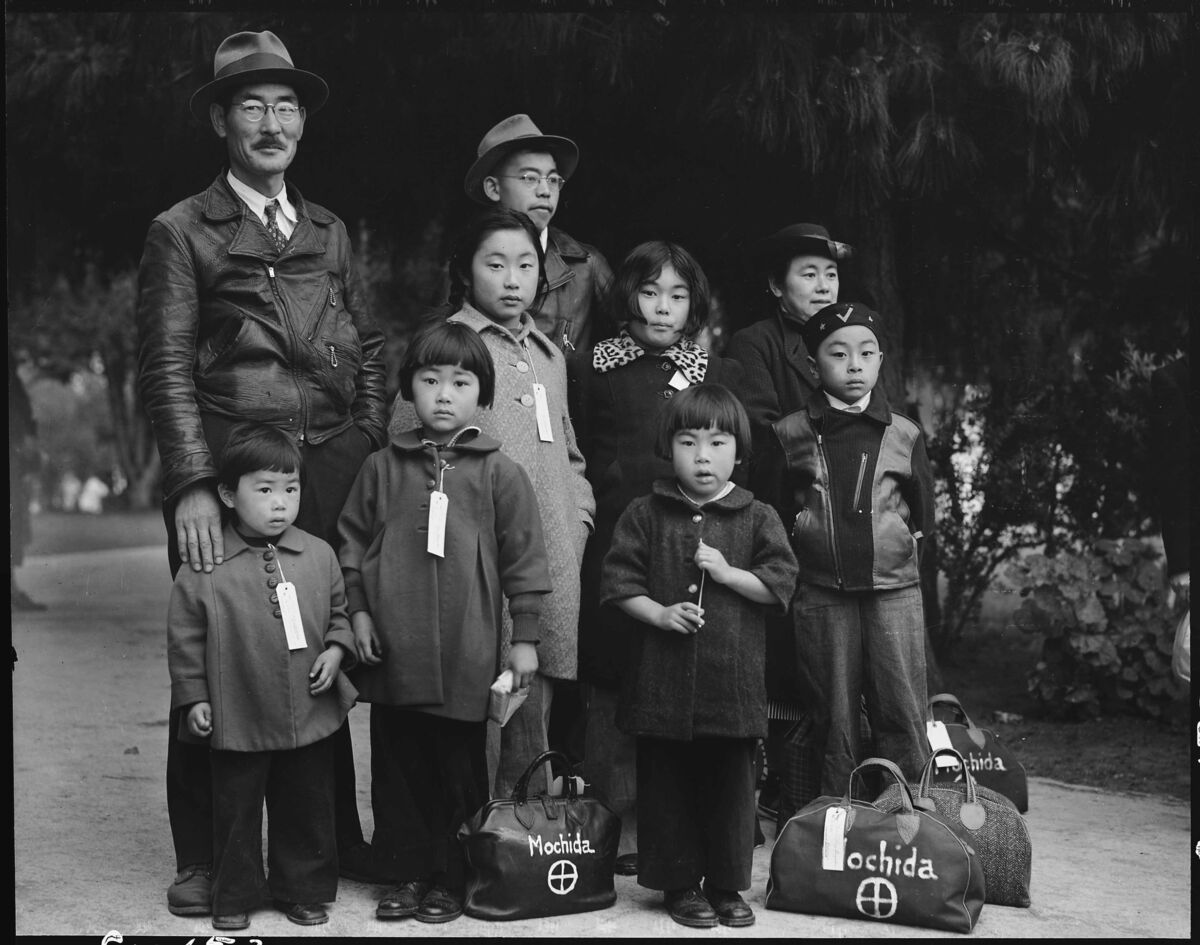 “One of the strengths of the exhibition is it allows the voices of the incarcerated people to be heard,” said  Carlson. And this is often subtle: One photograph, taken by Lange in Centreville, California, shows a family patiently awaiting their evacuation bus. They stand as if posing for a formal portrait, despite several telling clues: Their duffel bags are painted with their surname, in case they’re lost during the eviction process, and each member of the family wears an identification tag around his or her neck. Lange took several similar photographs of soon-to-be-incarcerated Japanese-American families—dressed in their finest clothing, clinging to their self-worth, gathered together as they await the unknown.
A series of portraits by Ansel Adams, taken at Manzanar War Relocation Center in California, utilizes low camera angles and intentionally close-cropping (avoiding the backdrop of the camp itself) to emphasize the strength and determination of the Japanese American prisoners. At the time, the images were criticized for showing sympathy to their subjects. Lange took issue with them as well—but because they did not fully convey the true hardship these individuals faced. 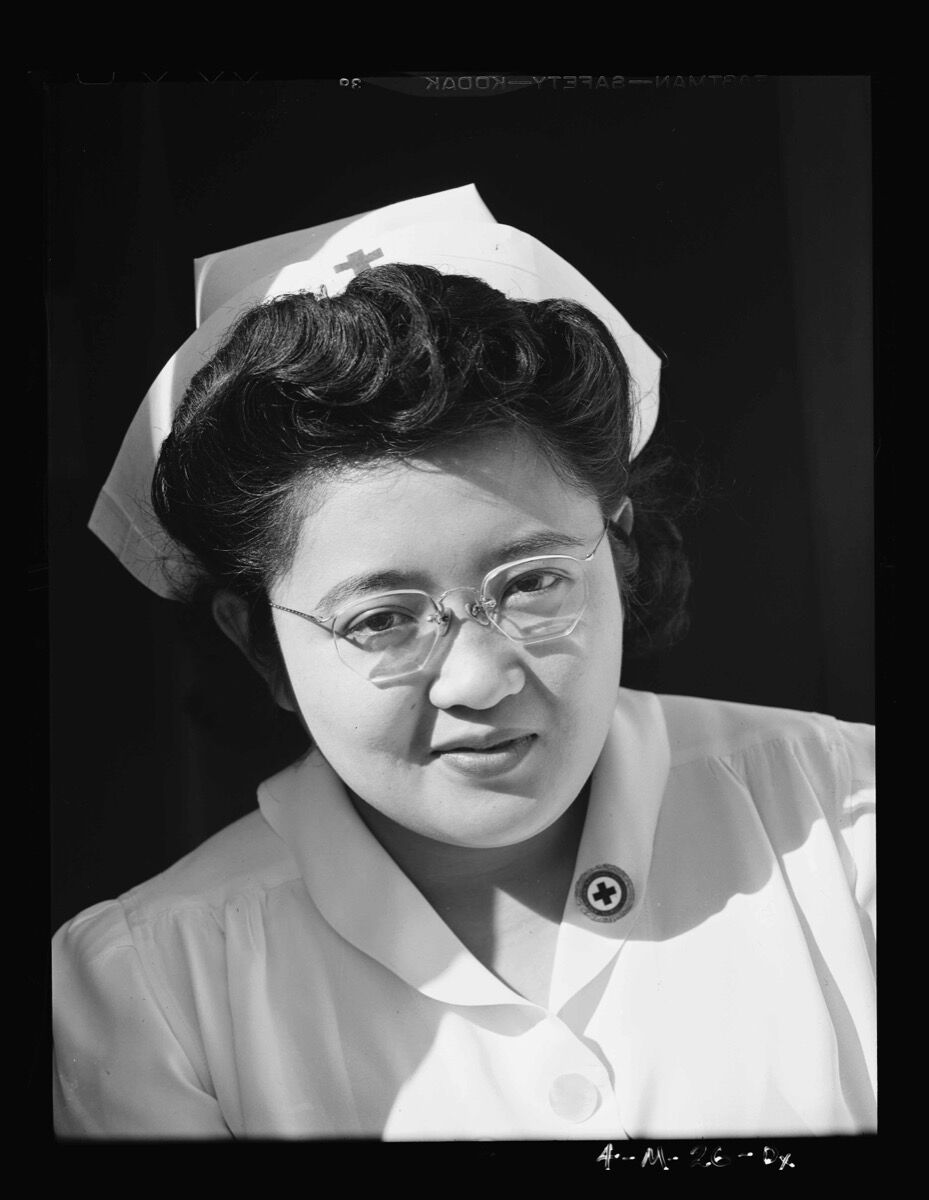 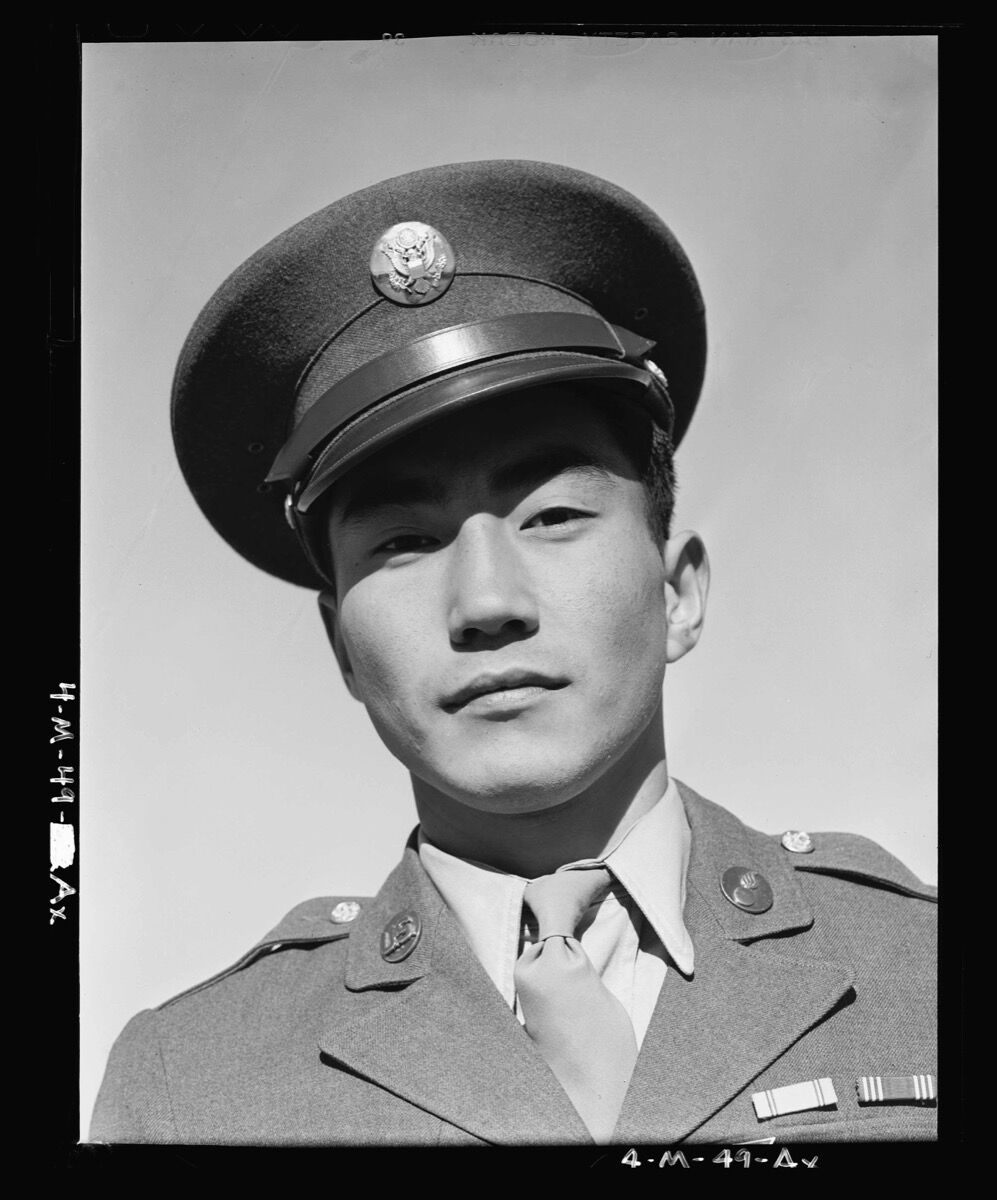 Images in this exhibition by
Tōyō Miyatake
, a professional photographer who was incarcerated at Manzanar and smuggled a camera into the camp, do a better job of translating the experience from the inside. Miyaki’s photos, initially taken in secret, were later permitted by the camp director. One image presents three young boys backdropped by a California mountainscape as they look outward from behind a barbed wire fence. “As a photographer, I have a responsibility to record the camp life,” Miyaki is quoted as having told his son, “so this kind of thing will never happen again.”
Many similar pictures, however, didn’t make it through government censorship. “There are a set of images in the National Archives that are literally marked ‘impounded,’ and were not meant to be shared at the time,” said Carlson. Among them is Albers’s photograph of three men standing watch in a wooden guard tower—two of them, positioned on either side of a small cannon, holding rifles.
A photograph by Fred Clark shows inmates in Arizona as they stuff mattress cases with bales of straw; another, taken by Albers in California, pictures a woman wearing a silk blouse, her hair carefully curled, sticking out her tongue while undergoing a public medical examination. Some images document joyous moments amidst the conditions of the camp—like Tom Parker’s photograph of a new bride and groom, who’d met at the Santa Anita Assembly Center, or Miyatake’s image of a family visiting another family’s newborn baby. 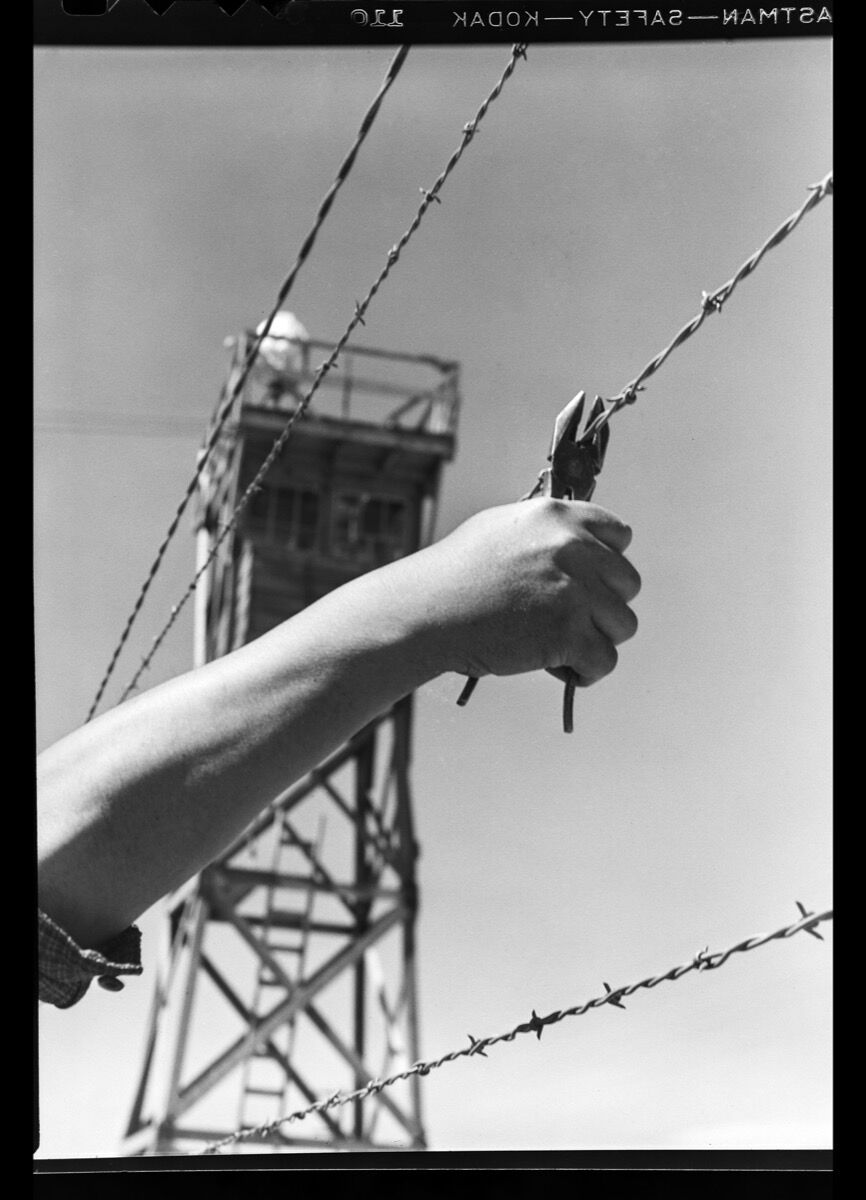 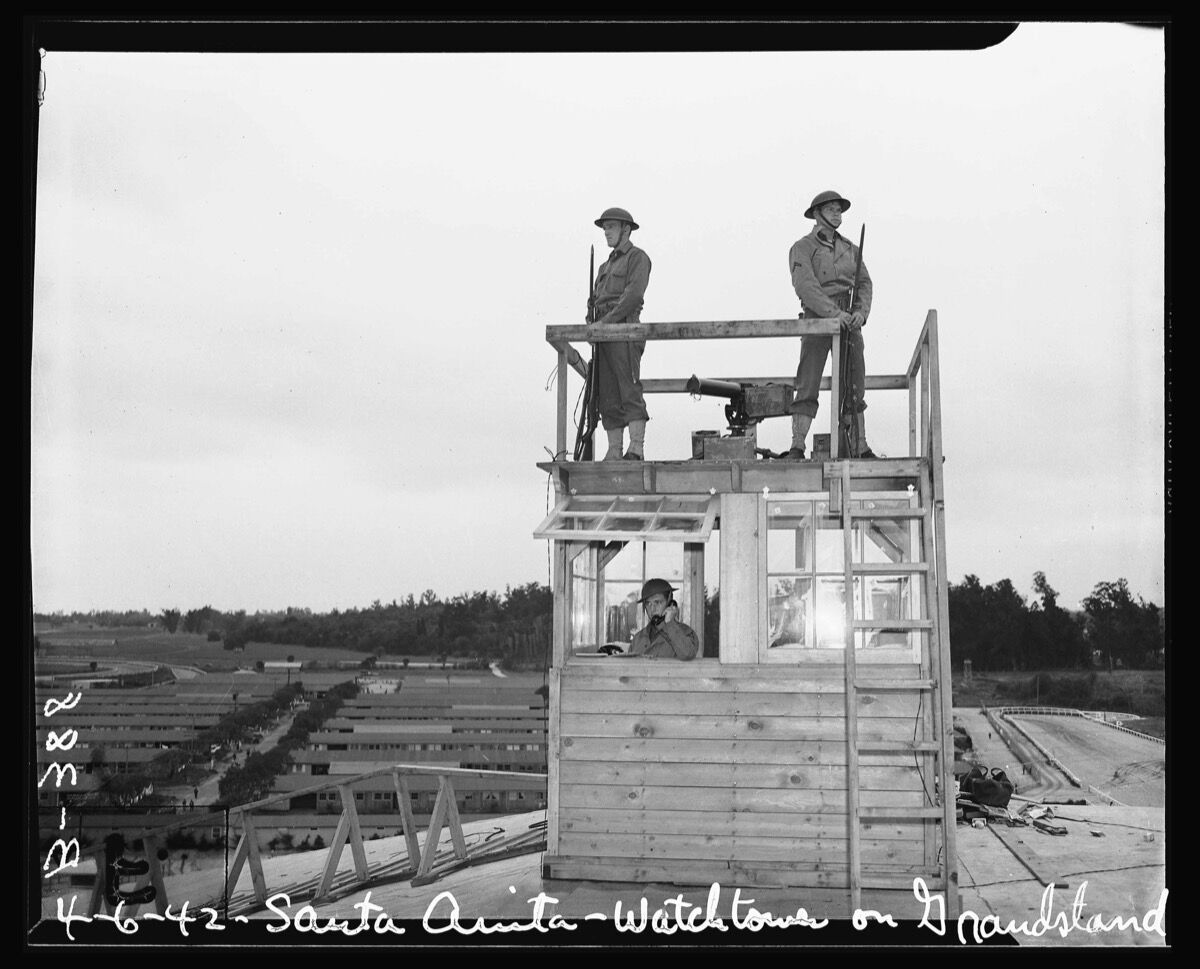 “Cornell Capa, who is [ICP’s] founder, was really interested in this idea of the concerned photographer; somebody who went out into the world to take pictures and to tell stories that would educate people and eventually change the world,” said Erin Barnett, the institution’s director of exhibitions and collections. It remains to be seen if, in our current moment, we’ll heed the lessons of this chapter in American history, captured so astutely by Lange, Adams, Miyatake, and others.
Molly Gottschalk is Artsy’s Lead Visuals Editor.
Related Stories

The Photograph That Made Ansel Adams Famous 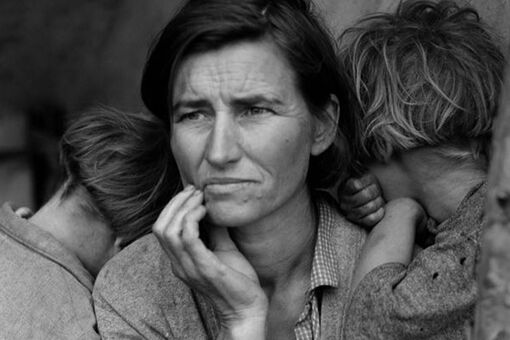 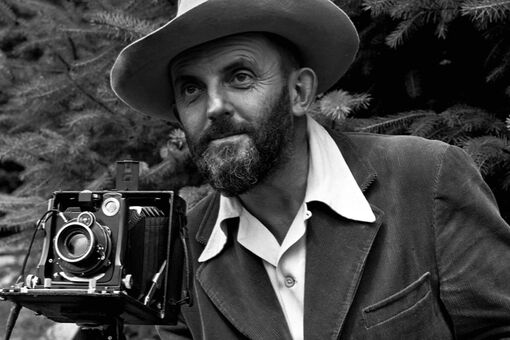 The Photograph That Made Ansel Adams Famous
Abigail Cain
Feb 17, 2017 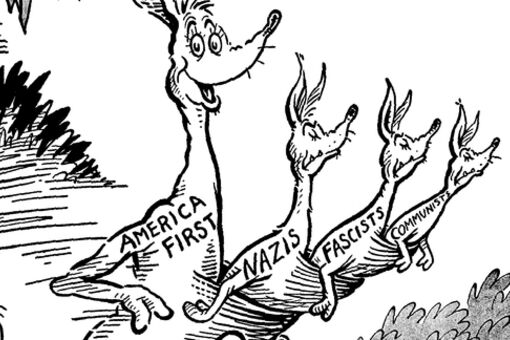