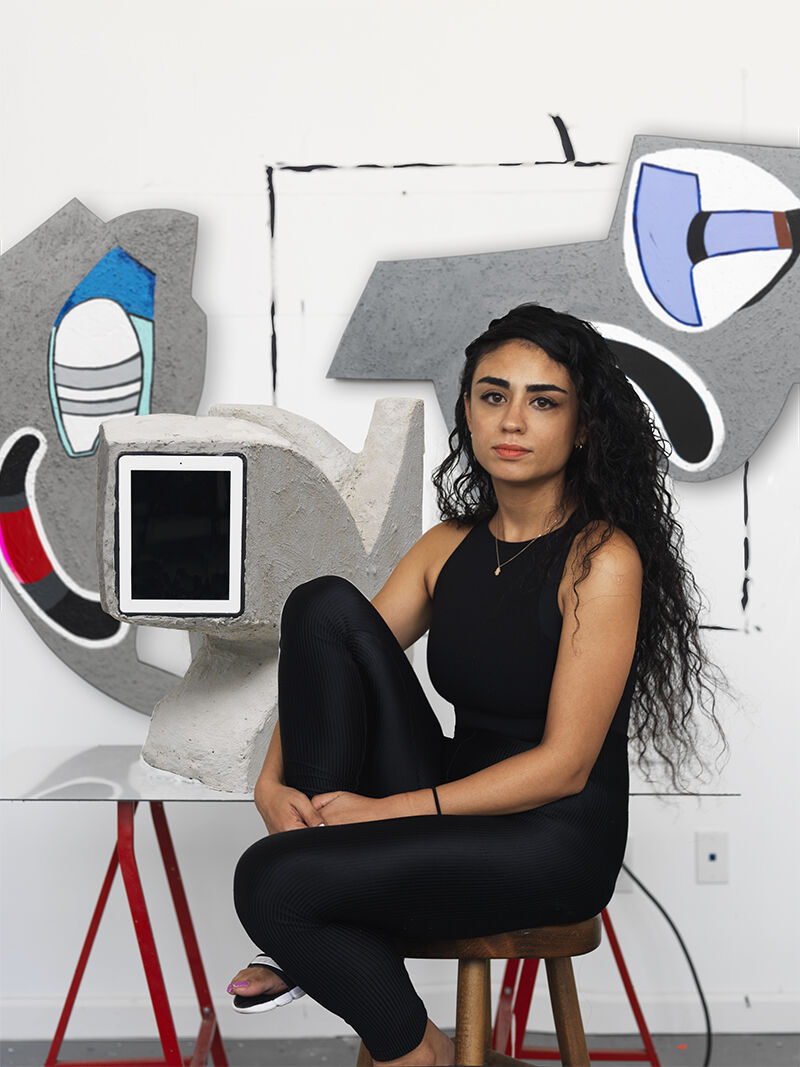 In a far corner of London’s SUNDAY Art Fair, a satellite of Frieze known for fostering emerging art, Hayal Pozanti’s four cut-out paintings form a mural spelling abbreviations of “Deny,” “Degrade,” and “Destroy” in the 32-year-old artist’s iconic, now cryptic language. According to Elaine Levy, co-owner and director of Brussels gallery Levy.Delval, interest in the work was high, and collectors weren’t settling for just the single pieces (priced at $10,500 each). They’d been asking for the whole lot—wall included. Having shown with Jessica Silverman Gallery for the past handful of years, Pozanti is increasingly known among the art world. But it’s fitting that at SUNDAY, a fair recognized for taking risks, she’s debuting new cutout works unlike any her collectors have seen before. 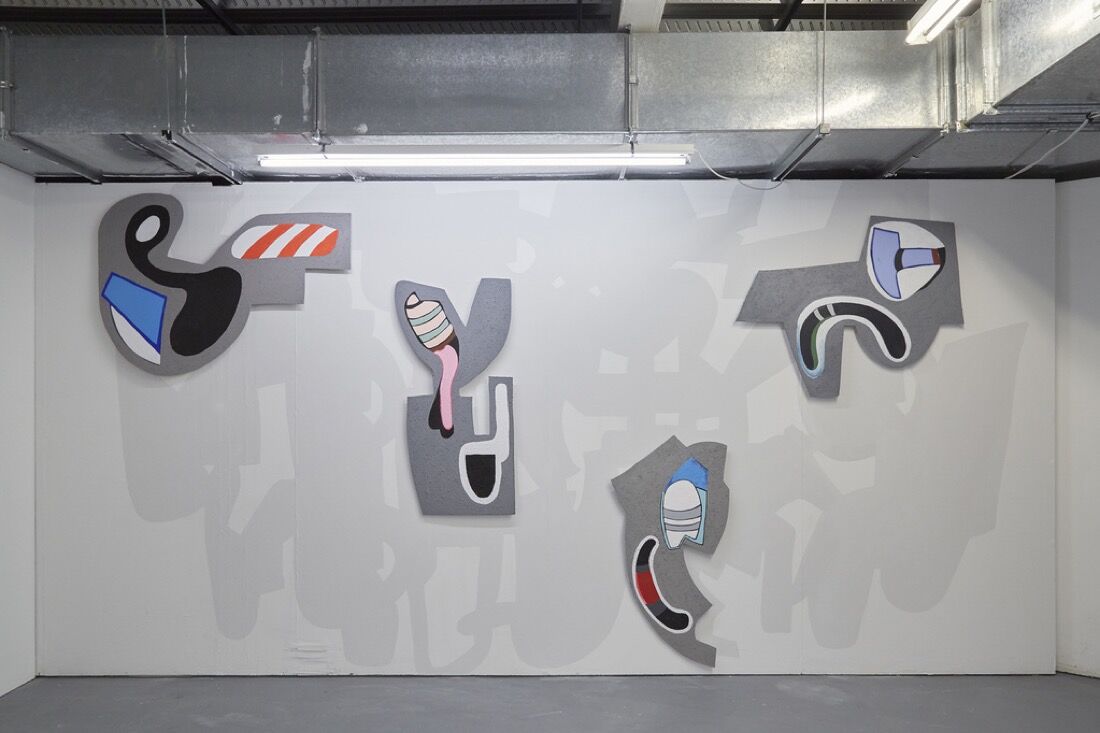 Two weeks prior to the fair, when I stop by to see the new paintings in her Long Island City studio, Pozanti whispers their message in a comically gruesome voice, motioning with claw-like hands: “Degrade... Deny... Destro-o-oy...”. It’s an unlikely gesture for the petite and soft-spoken artist, who articulates her work with thoughtful and fit-to-print clarity. “It sounds like a death metal band,” she laughs, though underlying the work are clandestine and serious meanings: data encryption, subliminal conscious, ciphers.
By now, Pozanti’s personal lexicon—a language of 31 shapes, titled “Instant Paradise,” that repeat tirelessly throughout her work—is understood among members of the art world. But where she once combined shapes randomly, the artist has become drastically more systematic, embedding each painting with particular significance. When I arrive at her studio, high in an old factory warehouse overlooking Manhattan, the ebullient Pozanti shuffles in with a leather sack spilling open with books—Race Against the Machine, How to Create a Mind among them—telling of the newfound infatuations laced within her paintings. 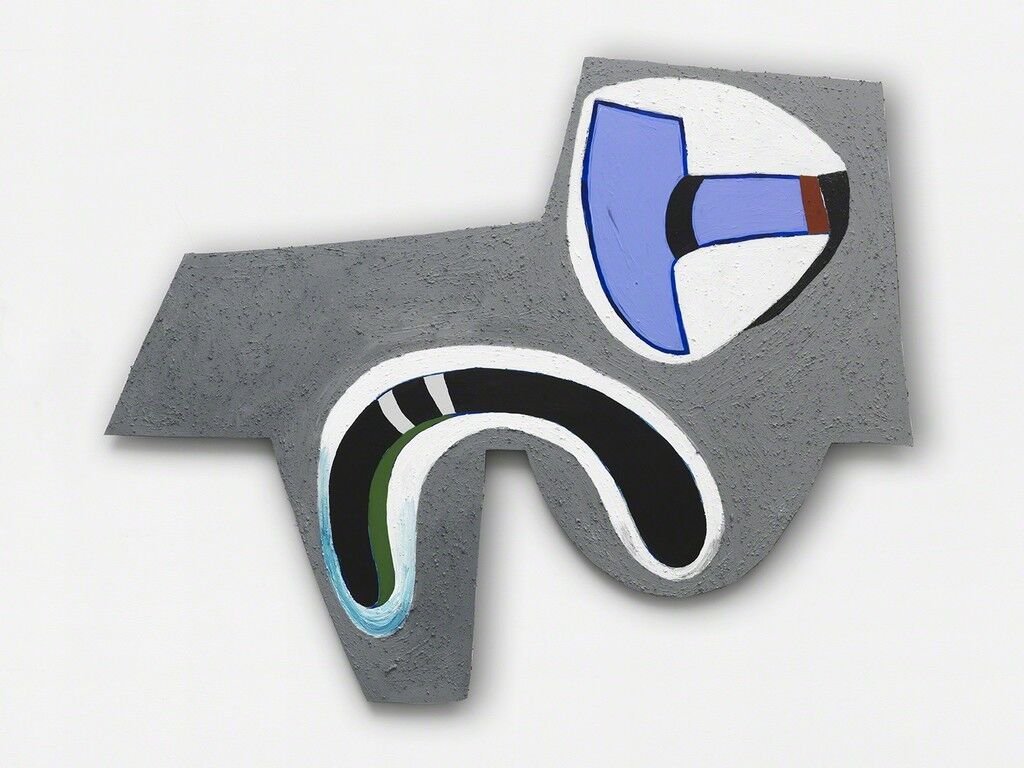 Hayal Pozanti
Y in DENY, 2015
LEVY.DELVAL
Advertisement
Pozanti began this shift a year ago, by assigning a letter to each shape and a number to each letter. The resulting alphabet is not unlike Gematria, the ancient numerology system used in Hebrew and Hindi (she speaks neither). Having fashioned her own typeface, Pozanti can string her alphabet together digitally by tapping away on her keyboard, or manually create number combinations by pairing two shapes. She conjures the number 14, for instance, by overlapping shapes for one and four. What’s emerged, she says, has become “more of a personal encryption system rather than a decipherable logical sequence”—a valuable tool for an artist grappling with the influence of technology on her life and creative process.
Pozanti grew up in Istanbul, daughter of a computer engineer mother who can program in seven languages and a doctor father spearheading brain surgery initiatives in the Middle East. By her own admission, she isn’t new to numbers or to thinking about the way technological advancements impact the world. “I’m from a generation where I remember pre-internet. I know how it immediately affected my life,” she says. “I started thinking more about it. From the invention of the steam engine, our society has formed this codependent relationship with technology that at this point isn’t really questioned. The news you read is akin to science fiction.” 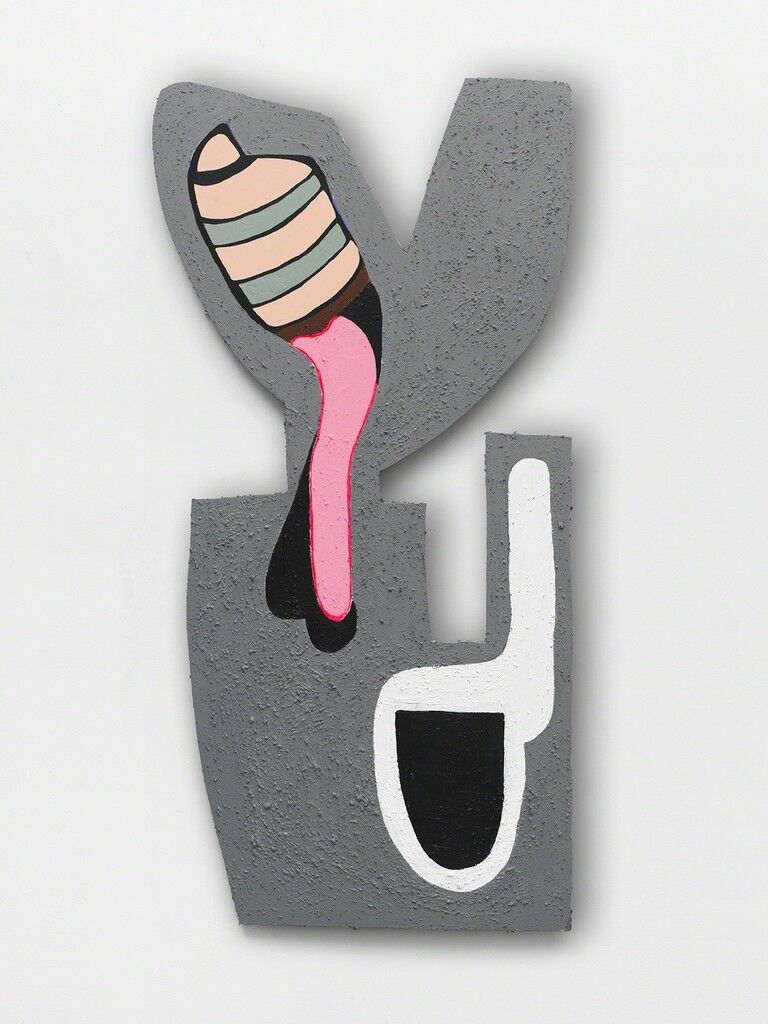 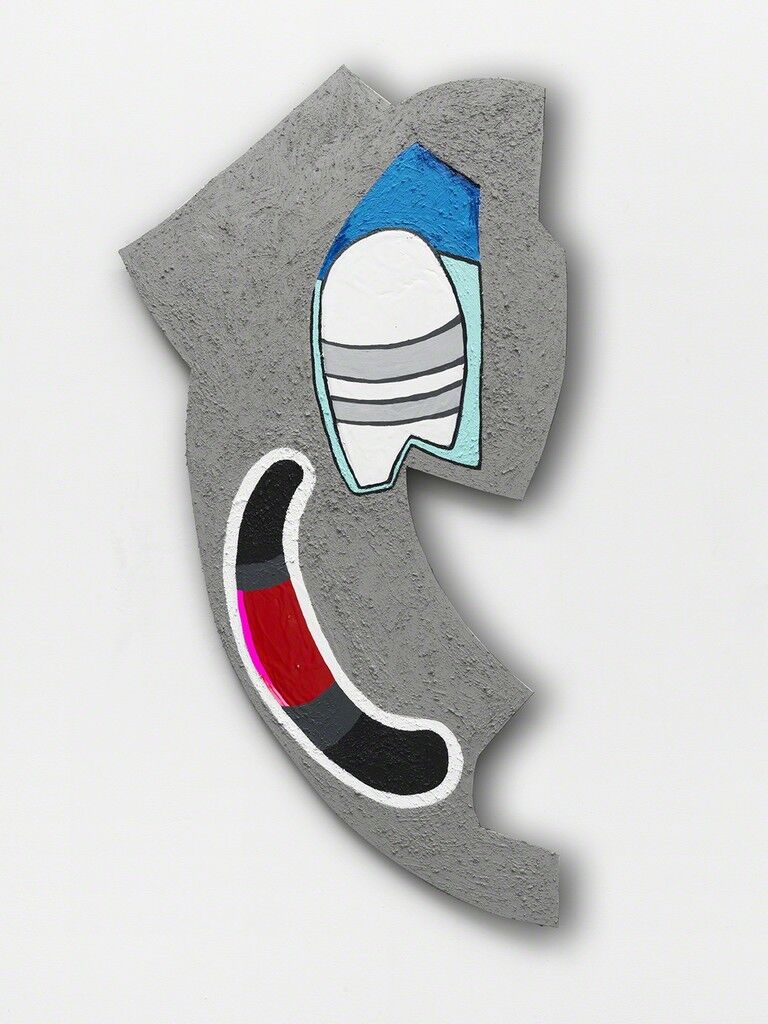 Hayal Pozanti
R in DESTROY, 2015
LEVY.DELVAL
Collecting data from the news has become something of a pastime for Pozanti. “Making sense of metadata is the contemporary challenge,” she says, referencing stats she mines from research institutions, online data banks, and New Yorker articles for a running list of source material. (Think “portion of U.S. jobs held by humans today that are at high risk of being automated by 2024,” or “the percent increase of emojis that a single person is likely to be using if they’re having sex.”) “We are coming to a point where we are quoting statistics rather than understanding the world through words, or language, or poetry,” she says. And through this binary lens, Pozanti’s data paintings were born.
Prior to the SUNDAY fair, Pozanti combed through data to find figures specific to London, skipping past the city’s number of security cameras (too obvious) and ultimately landing on British data in the Edward Snowden leaks. A slogan used in military computer warfare operations—“Deny, Degrade, Destroy”—though not uniquely British, struck a chord with Pozanti, leading her to incorporate the words into her paintings at SUNDAY. “I want them to encapsulate information that is not tangible, that refers to our subliminal consciousness, that makes us human, that can’t be quantified through data or information,” she says. “That’s also why they’re textured,” she adds, running a hand along the surface of the jigsawed, dibond forms. “I want them to feel physical.” 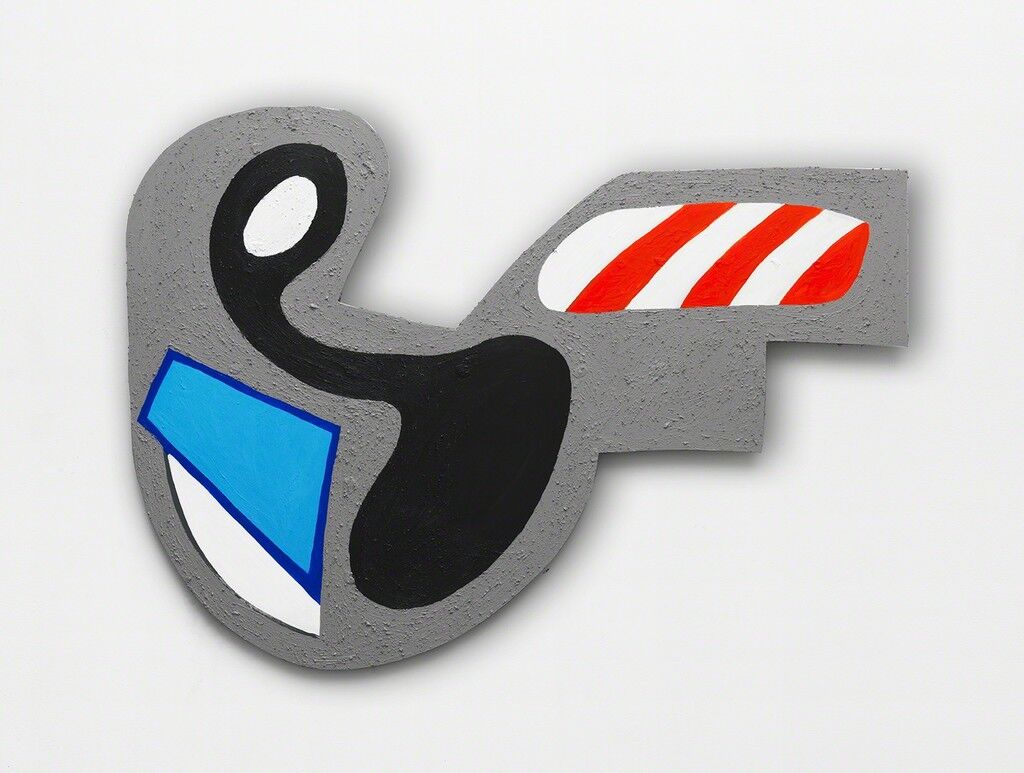 Hayal Pozanti
D in DENY, 2015
LEVY.DELVAL
The susceptibility of the internet to change—the threat that data may one day disappear—also inspires Pozanti. “It sounds very Orwellian, but I’m a firm believer in keeping things physical. It’s much more difficult to manipulate information once it’s been printed. So the idea of taking data from The Cloud and bringing it into a painting is, in my humble way, immortalizing it and saying ‘this information existed, and it’s here if ever someone needs to use it.’”
A scattered stack of books on Pozanti’s studio floor—meditations on machines and the human mind and various innovations in between—is fodder for her upcoming exhibition at the Aldrich Contemporary Art Museum, “Deep Learning,” concerned with what differentiates humans from artificial intelligence systems (AIs). Reading up on the human brain, Pozanti became fascinated by the neocortex (a part of the brain that learns by pattern recognition) and deep-learning software (an AI initiative that mimics this form of learning). On her alphabet of recurring shapes, she confides, “I have, without realizing it, imposed some form of deep learning onto viewers. The more frequently they see the shapes, the more their neurons will be activated in the same area and the more they will learn about them.” 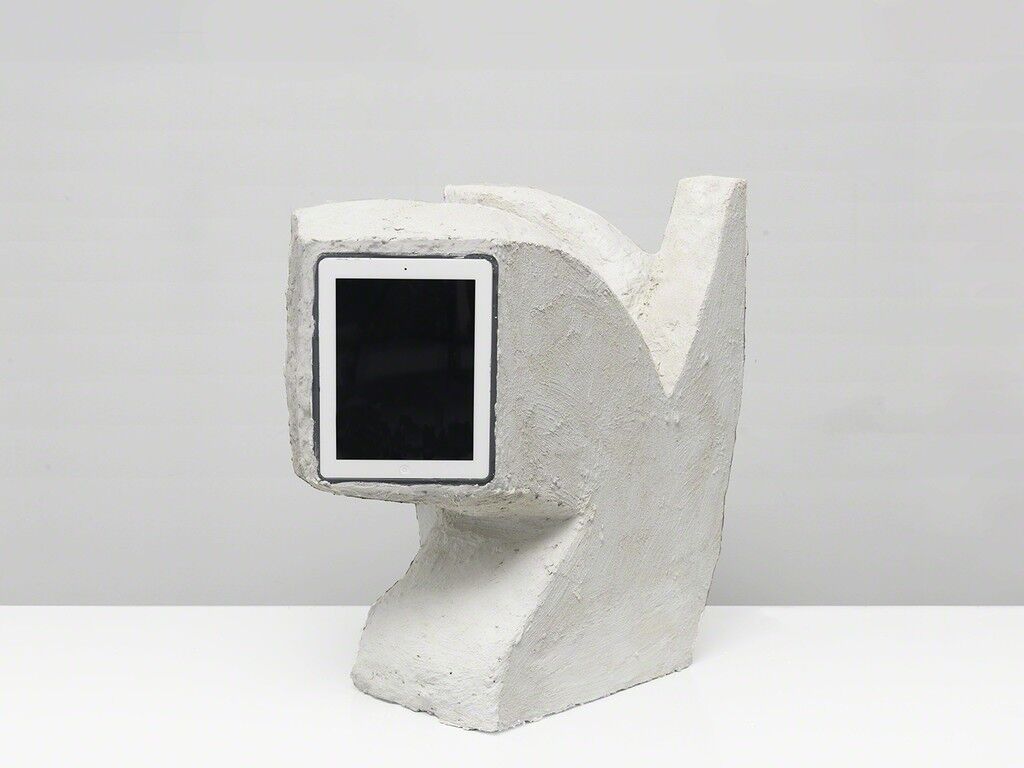 Hayal Pozanti
XALE, 2015
LEVY.DELVAL
Immersing herself in research meant a barrage of reading (including Dating an AI, a less-than-subtle subway read about human-cyborg affairs); engaging with chatbots online (to her dismay, though: “they’re not sentient”); and studying spindle cells (neural filaments “activated when we fall in love or listen to music”). But for an artist staring into the jaws of artificial intelligence, there’s perhaps no better place to begin than with humanity itself. So Pozanti made lists of the cognitive and physiological attributes that make us uniquely human—dreaming and abstraction among them—drawing a line between the human mind and AI.
“It’s a good thing for us as humans to think about, instead of shivering in fear of artificial intelligence taking over our world: what will our strengths be, what it means to embody a body, to be imperfect,” she says of these preoccupations, which are beautifully realized in her newest body of work.
—Molly Gottschalk
Explore SUNDAY Art Fair 2015 on Artsy.
“Deep Learning” will be on view at the The Aldrich Contemporary Art Museum, Connecticut, Nov. 15, 2015—Apr. 3, 2016.
Related Stories