Charlotte Hecht
Nov 7, 2017 4:48pm
The term “
stained glass
” may trigger thoughts of dark
gothic
churches and staid biblical imagery of the
medieval
era. But as these modern and contemporary artists prove, stained glass windows can provide a canvas for geometric abstraction and explorations of light and color—even a platform for social commentary. The nine artists below, from
Gerhard Richter
to
Kehinde Wiley
, combine modern themes with an ancient medium to create work that is often striking and always luminous. 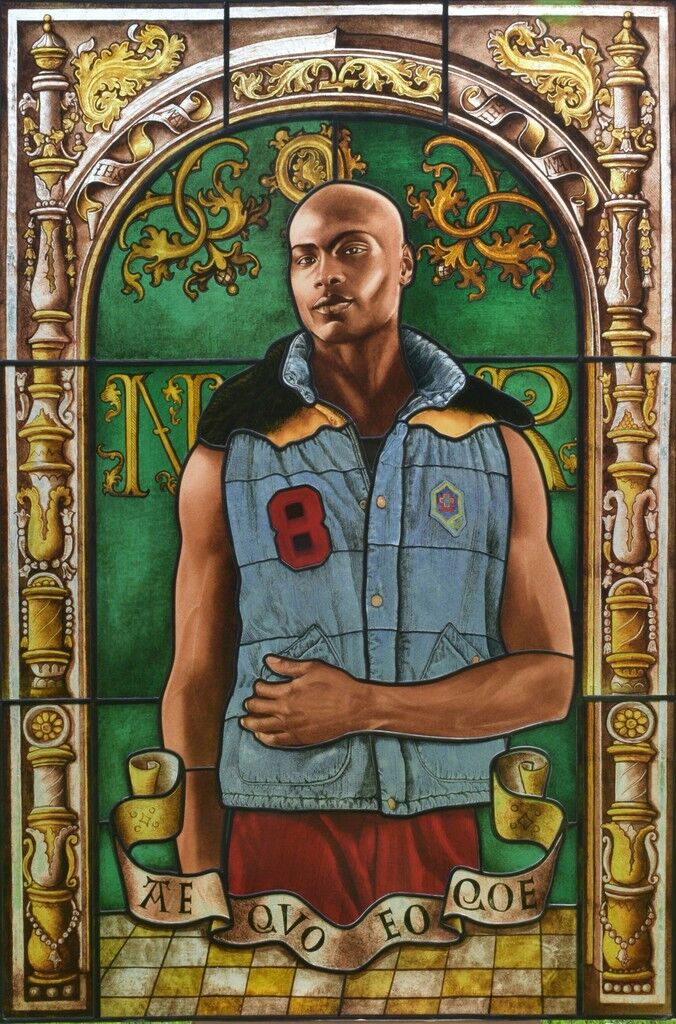 Kehinde Wiley
Saint Remi, 2014
"Kehinde Wiley: A New Republic" at Brooklyn Art Museum (2015)
Recently tapped to paint former president Barack Obama’s official portrait, Wiley’s work reinvents classic Western European religious imagery with new protagonists: young black men and women. In Saint Remi, Anthony Sookdeo has taken the place of a saint, his Timberland boots and black letter jacket replacing the monk’s robes and long white beard we might expect to see in a church window. Wiley has said that his stained glass work “is not about nationhood, it’s not about race. It’s about being powerful in the world, glowing literally…letting us see a state of grace for those people who rarely get to be able to be seen that way.”

Marianne Peretti, Windows for the Cathedral of Brasília, 1989 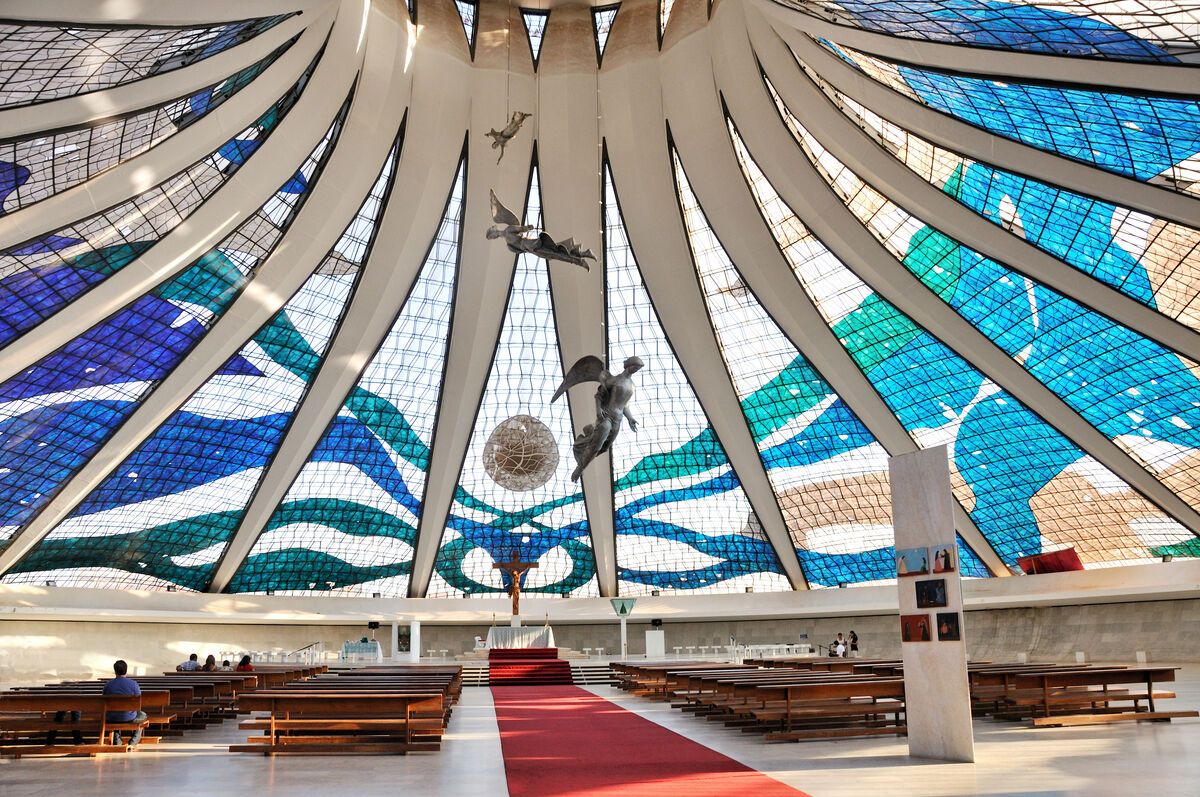 Interior of the Cathedral of Brasilia. Photo via Wikimedia Commons.

Advertisement
Architect
Oscar Niemeyer
is often lauded for his work on the Cathedral of Brasília, a radically modern house of worship. But it is lesser-known Franco-Brazilian artist Peretti who designed and painted the cathedral’s monumental stained glass windows. Peretti drafted the undulating green and blue shapes that flow across the glass roof of the cathedral by hand—and to full scale, working on enormous sketches laid across the floor to realize her vision. Today, church visitors enter below ground, venturing through a dark passageway before emerging into the nave where light filters in through Peretti’s stained glass overhead.

Judy Chicago
Rainbow Shabbat, 1992
Judy Chicago Studio
Chicago
began to explore her identity as a Jewish woman in “The Holocaust Project: From Darkness into Light” (1985–93), an exhibition she created with photographer and husband Donald Woodman. Working together, the artists strove to understand their shared Jewish heritage—a background both felt had seldom been addressed in their lives and work. The last piece in the 12-part show, Rainbow Shabbat portrays people of differing ages, races, and genders gathering around a Shabbat table. In an exhibition focused on a dark and horrific subject (influenced by the two and a half months the couple spent traveling between ghettos, concentration camps, and memorials in Europe), Chicago chose to end with an optimistic scene in stained glass. In her words, “light is life.” 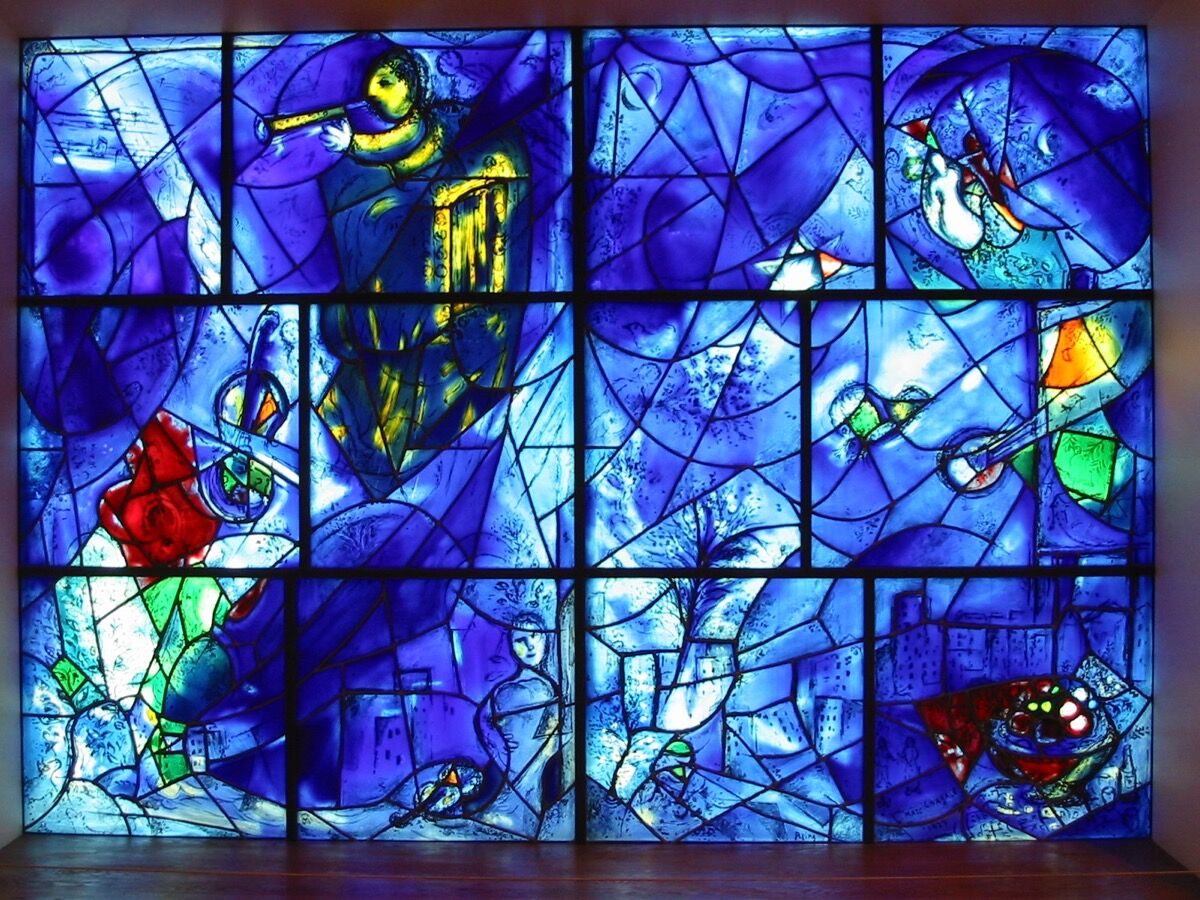 Inspired by the wave of support for public art projects in Chicago during the late 1960s and ’70s—including works by
Pablo Picasso
and
Alexander Calder
—
Chagall
gifted these monumental stained glass windows to the Art Institute of Chicago in 1977. Designed as a tribute to the city’s 1976 bicentennial celebrations, Chagall’s imagery is an homage to American artists of all stripes. Each panel highlights a different specialty: music, painting, literature, theater, and dance. In order to replicate his signature vivid colors in glass, Chagall worked closely with master glassmaker Charles Marq, painting directly onto the panels Marq created. While struggling to design a 75-foot-tall window for the Cologne Cathedral, Richter accidentally placed a template of the Gothic window frame atop one of his color grid paintings. It was a revelation. Richter’s window—commissioned to replace the original, destroyed in a bombing during World War II—is made up of 11,500 pixel-like squares in 72 different colors. Although the pattern was determined by a mathematical formula, Richter also referenced the over 700-year-old church’s past by incorporating glass made using medieval techniques. 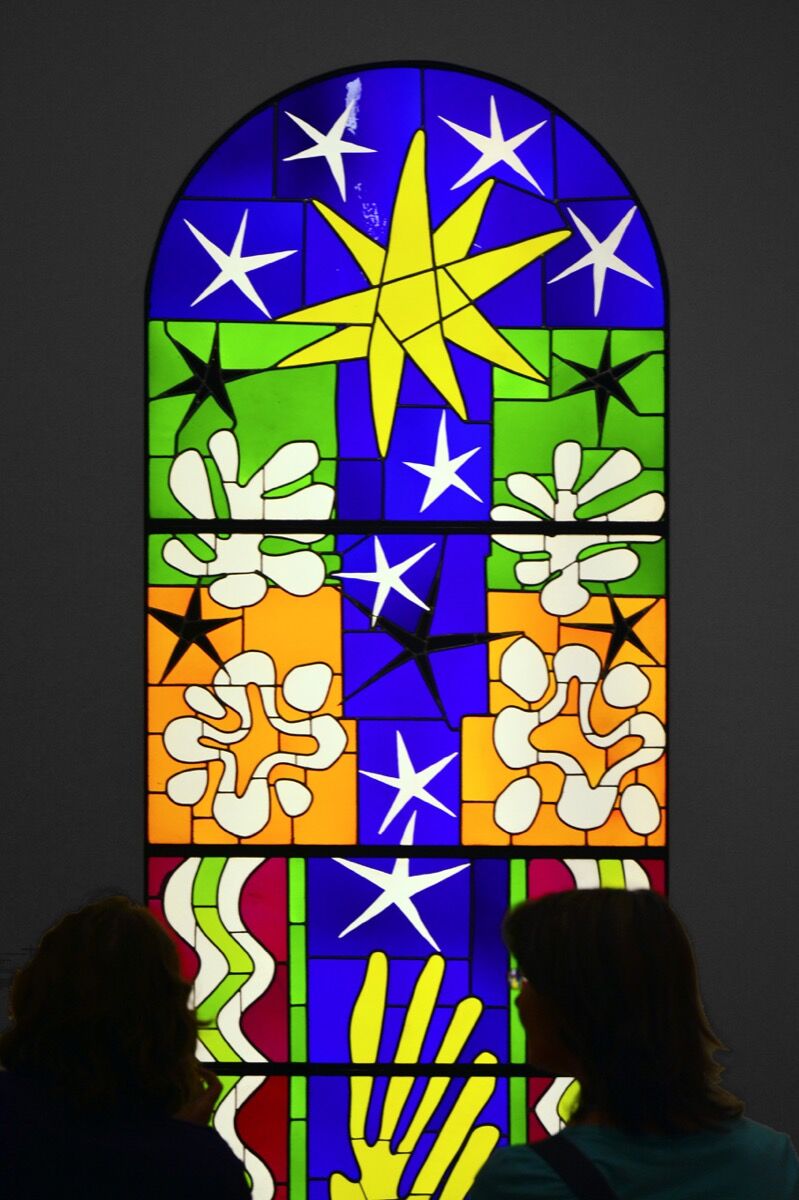 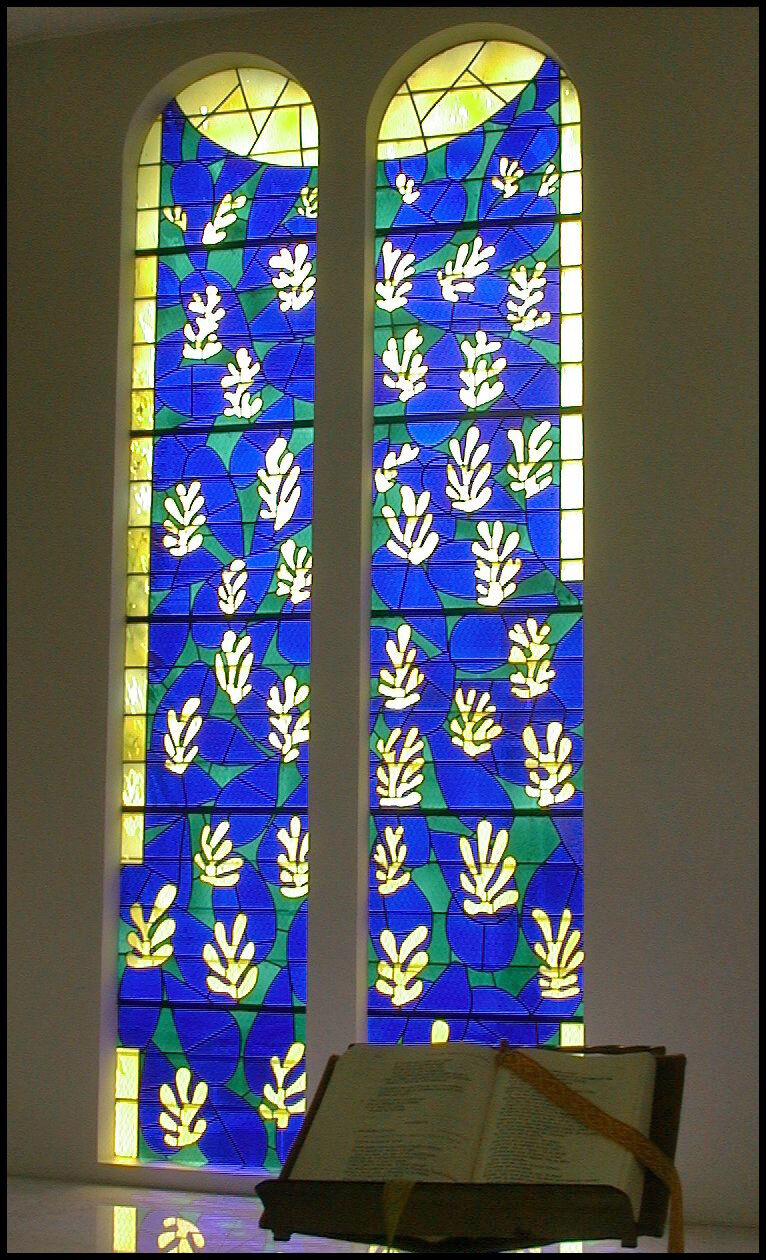 Stained glass by Henri Matisse at the Matisse Chapel. Photo by Monica Arellano-Ongpin, via Flickr.

Commissioned by the Time Life Company, this festive stained glass window was installed in Rockefeller Center on December 8, 1952, just in time for the holiday season. By this point in his prolific career, the 83-year-old
Matisse
had turned to paper cut-outs as a result of a major surgery that had left him wheelchair-bound. To make Nuit de Noël, the artist cut and pasted brightly colored paper into a preliminary maquette that was sent to a stained-glass craftsman for fabrication. In a comment to Alfred H. Barr Jr., then director of the Museum of Modern Art, Matisse compared the final, roughly 11-foot-tall window to a “performance by an orchestra.” 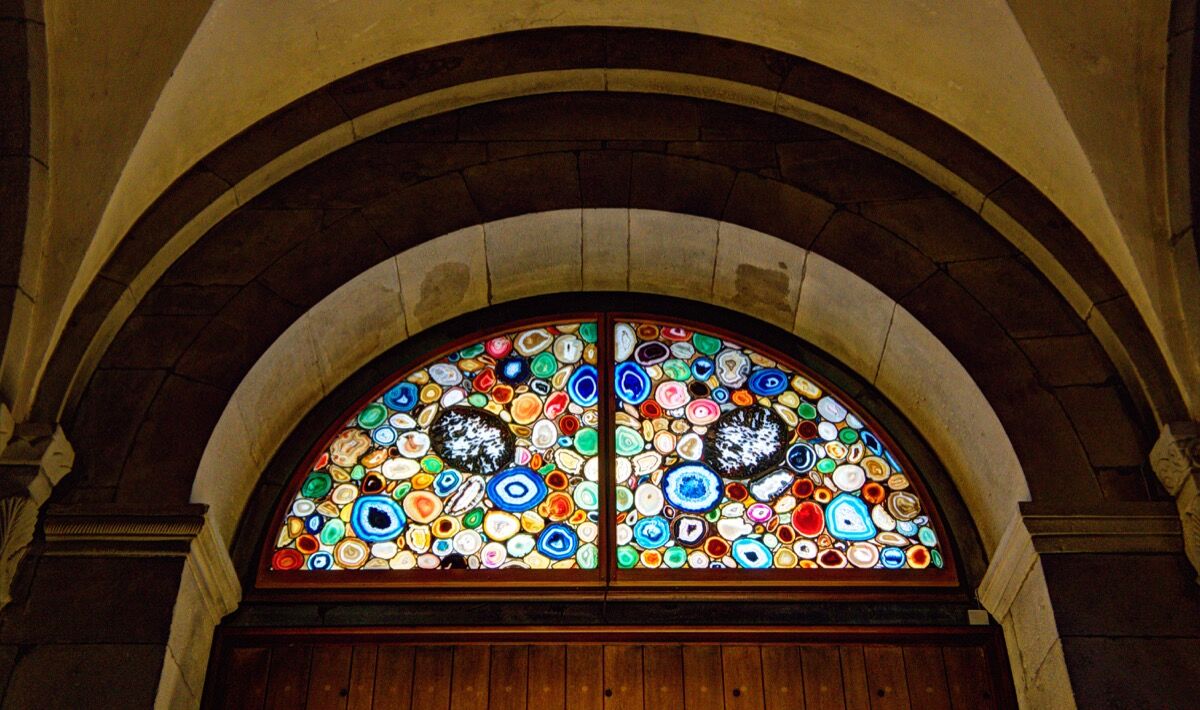 Seven of
Polke
’s twelve windows for the Grossmünster cathedral in Zürich are not stained glass at all. Instead, the German artist employs thinly sliced agate mosaics in a twist on traditional stained glass techniques. Their designs are abstract, a kaleidoscope of mineral cross sections. The remaining five windows are figurative and represent scenes from the Old Testament. Polke’s formidable career was bookended with work in glass: He began his artistic training in 1959 as an apprentice in a glass-painting workshop, and he completed the Grossmünster windows a year before his death. 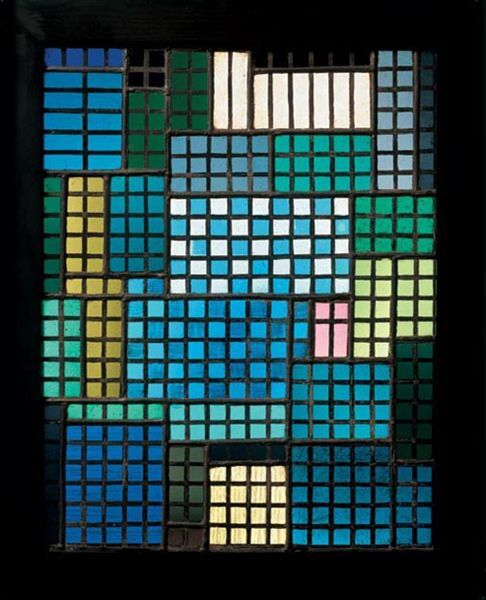 Albers
was first taught to work with glass by his craftsman father and continued to create glasswork as both a student and teacher at the famed
Bauhaus
school. Park, one of a number of glass assemblages created by Albers, was a modernist take on a stained glass window. With its gridded structure of multi-hued squares and rectangles, it set the stage for the many years Albers would spend studying, writing about, and creating work that investigated color in abstract forms—perhaps best memorialized in his decades-long series “Homage to the Square.” 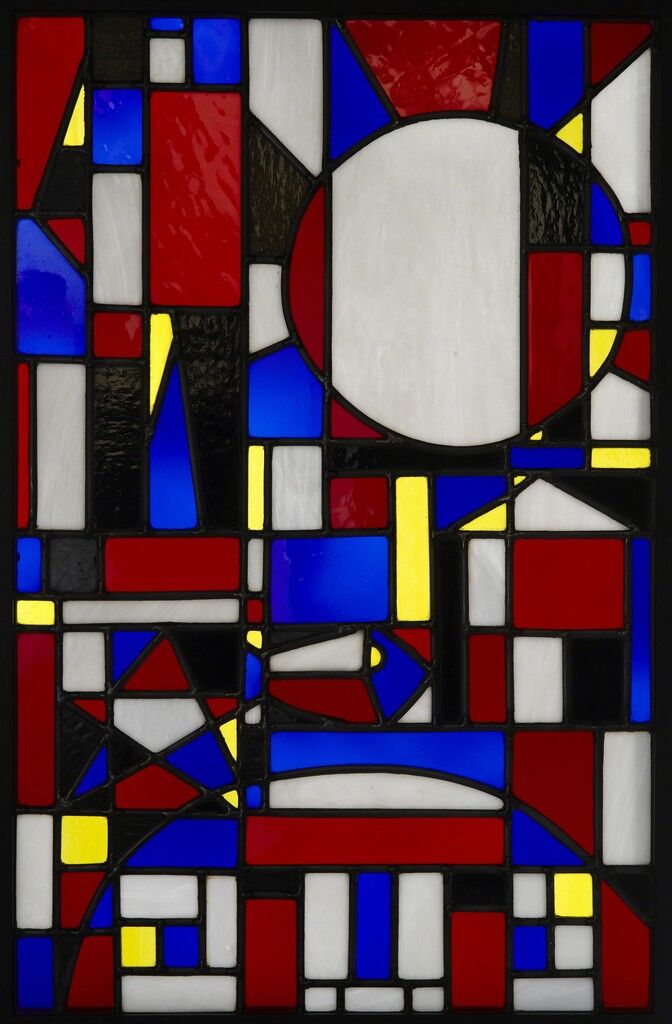 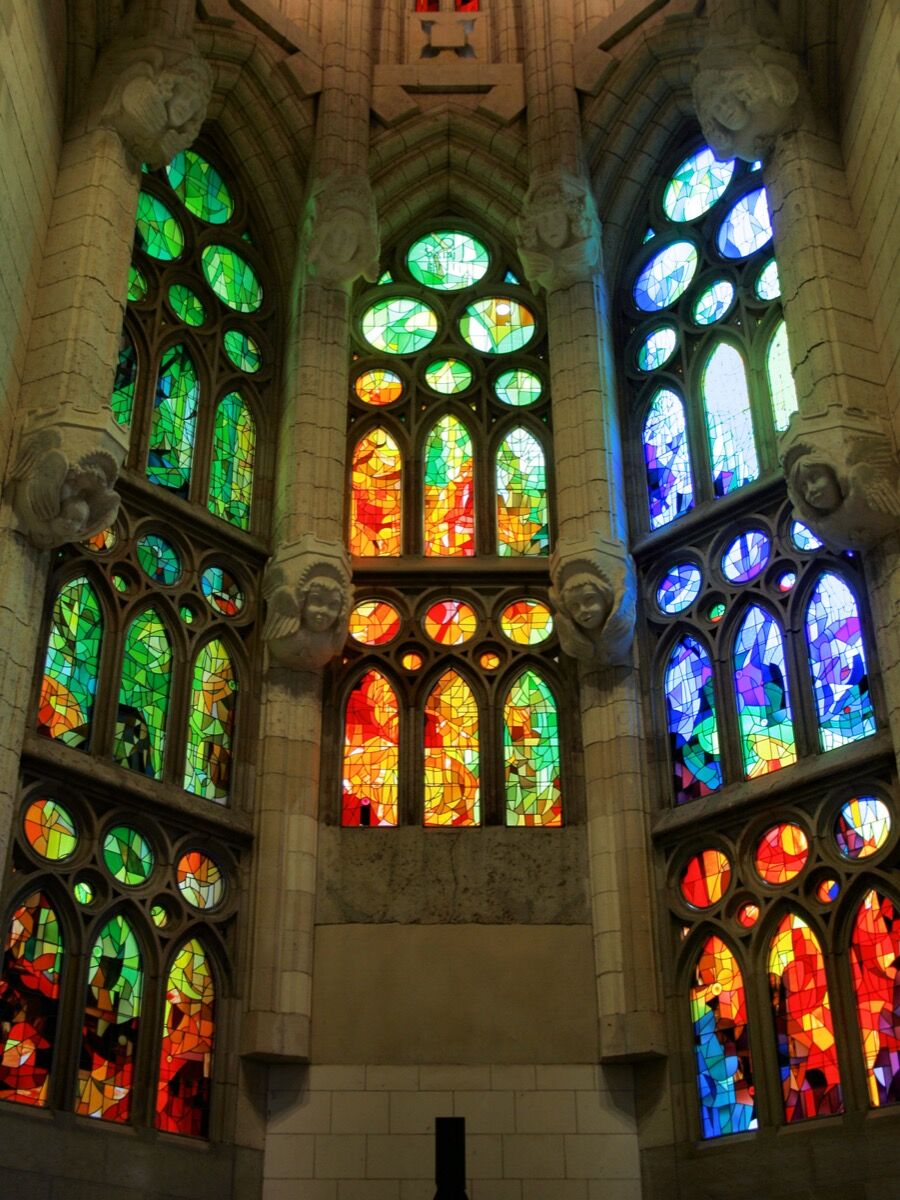 Stained glass at the Sagrada Família. Photo via Wikimedia Commons.

Torres-García
spent several of his formative artistic years in Barcelona, where he worked with
Antoni Gaudí
on what today could be considered the most spectacular work of stained glass in the world: Barcelona’s Sagrada Família. But this later piece—a window designed by the artist after he’d returned to to his home country of Uruguay—is a far more accurate encapsulation of his oeuvre. At first glance, it seems to be a simple emulation of the geometric abstraction favored by 20th-century European modernists. But look closely, and you’ll begin to notice recognizable symbols: a fish, a star, and a house embedded into the gridded glass panels. It’s a prime example of “Constructive Universalism,” a style pioneered by Torres-García himself that combined abstraction with recognizable symbols drawn from pre-Columbian culture. With this uniquely Latin American visual language, the artist hoped to decentralize European dominance in the art world.
Charlotte Hecht
Related Stories