Hip Hop, Punk, and the Rise of Graffiti in 1980s New York 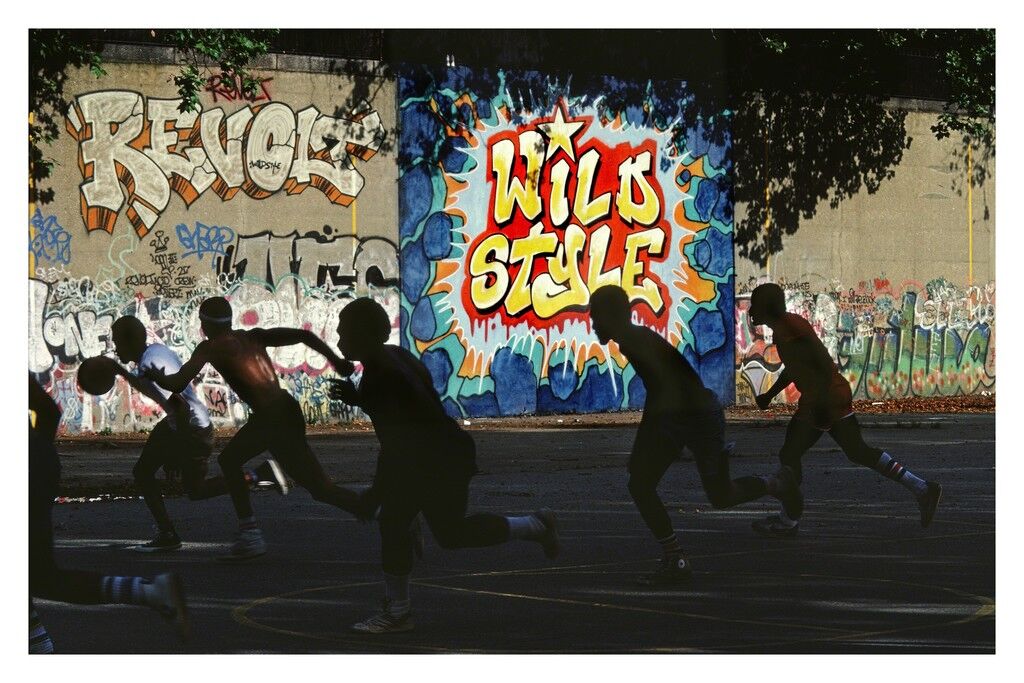 Martha Cooper
Freshly Painted Wild Style Wall in Riverside Park, Manhattan, NYC, 1983
Steven Kasher Gallery
On May 2, 1981, the rapper
Fab 5 Freddy
and the dancers of the Rock Steady Crew met outside of a SoHo loft-turned-performance space called Common Ground. They were there to rehearse for the following day, when they would perform alongside a slideshow of
Henry Chalfant’s
documentary photographs of New York’s subway graffiti.
“All of a sudden, some guys in the Rock Steady ran up to us and said ‘Yo, the Ball Busters are outside,’” Freddy recalled during a recent talk that coincided with a show of his paintings at Brooklyn’s Pioneer Works. The Ball Busters—a gang from Washington Heights—had been terrorizing the breakdancing crew, and were now threatening to end the show.
Ready to throw down, Freddy grabbed a chair and ran toward the Ball Busters at the entrance, thinking he still had backup. “When I turned around, the Rock Steady Crew were running the opposite direction,” he said, “and they were all trying to squeeze through this one door.” 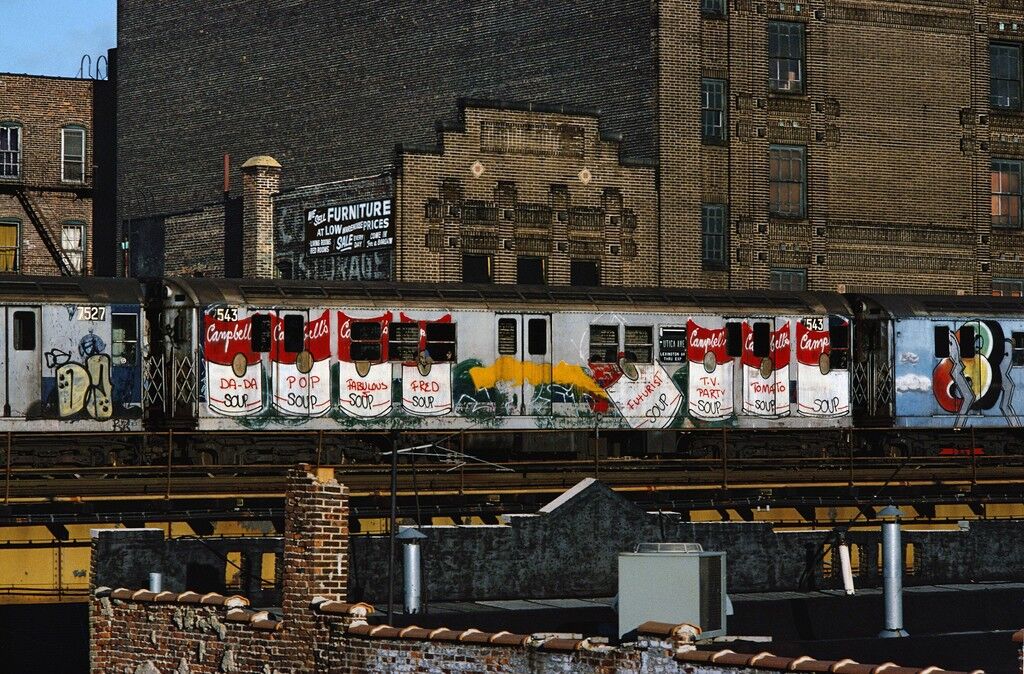 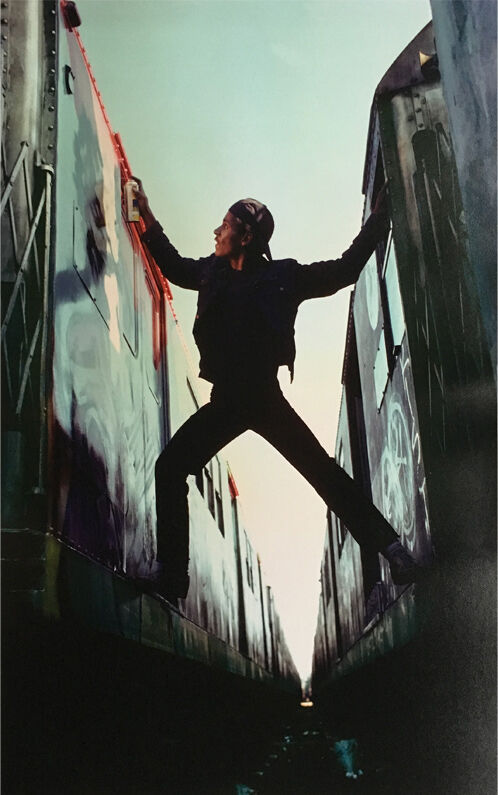 Martha Cooper
Dondi painting in yards, 2/10, 1980
StolenSpace Gallery
No one was seriously hurt, but Common Ground chose to shut down Chalfant’s show. However, buzz surrounding the show—coupled with the momentum from Sally Banes’s landmark Village Voice article, “Physical Graffiti: Breaking is Hard to Do,” which published two weeks prior—led to three more shows popping up at the venue, and gigs for the Rock Steady Crew at numerous summer festivals.
One standoff couldn’t stall that year’s swell of media coverage around hip-hop and its related exhibitions. A new generation of New York MCs and graffiti artists were rapidly attracting attention from music producers and collectors.
Leading that generation was Freddy, né Fred Brathwaite, the pioneering artist who had his fingers in everything from graffiti and rapping to acting—notably in Charlie Ahearn’s cult classic Wild Style.
But the wheels were in motion long before the 1980s. “A lot of people think the whole idea of a DJ with two turntables started in the Bronx with Kool Herc,” Freddy said. “But it didn’t.”
In fact, mobile DJs had been using rudimentary mixing set-ups to string fragments from disco and funk records into a seamless mix as far back as the ’60s. These musicians were also among the first graffiti artists. Back then, it wasn’t uncommon to see, say, Brooklyn’s Grandmaster Flowers’s “Flowers + Dice” tag thrown up in black marker around New York. 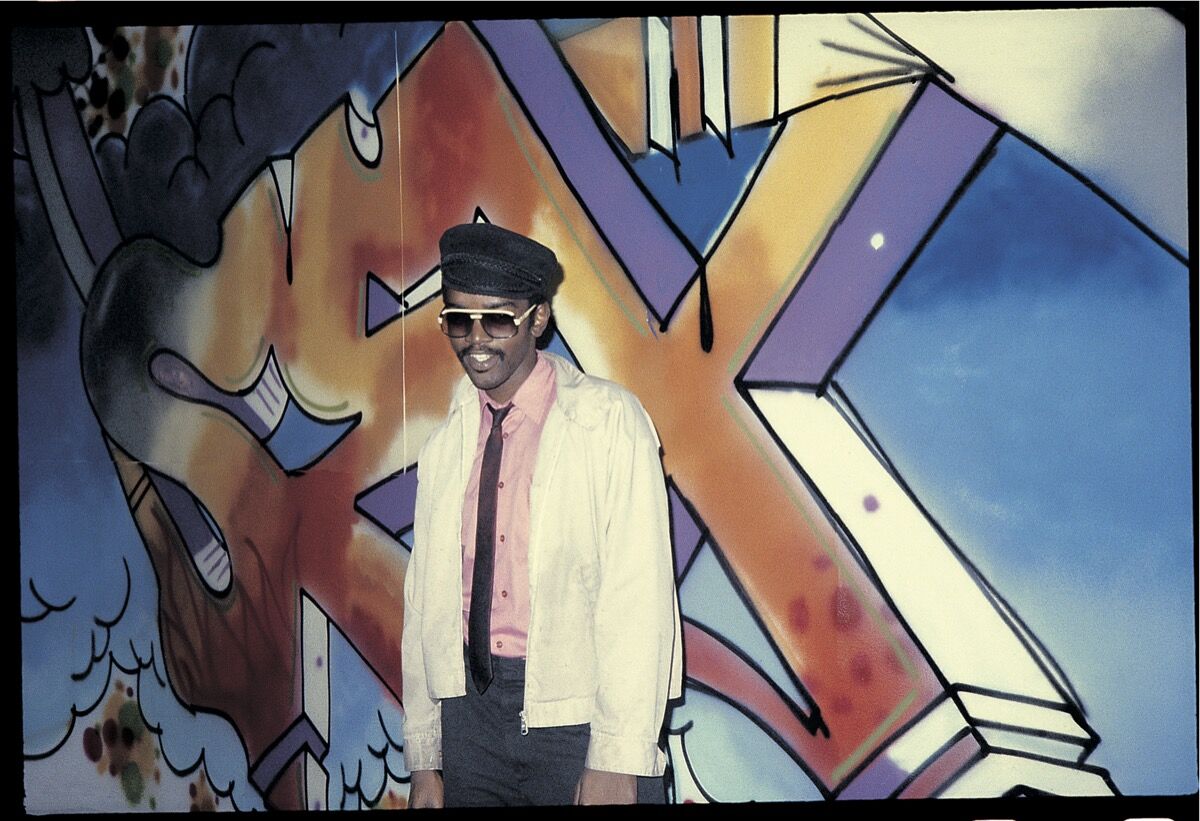 Charlie Ahearn, Image of Fab 5 Freddy in front of one of his paintings, 1980. Image will be on view at PPOW's forthcoming exhibition, "Charlie Ahearn Scratch Ecstasy" May 18 - Jun 24. Courtesy of the artist.

Advertisement
Working alongside legends such as the Maboya, Plummer, and Pete DJ Jones, Cameron “Grandmaster” Flowers is sometimes cited as the progenitor of hip-hop. From his early days setting up in Brooklyn parks and squares to 1969, when he opened for James Brown at Yankee Stadium, Flowers cultivated the disco-like, four-on-the-floor beat and the ad-libbed lines that would influence future hip-hop musicians.
“The idea of music being able to seamlessly blend from one song to another was a revelation that created a serious movement,” said Freddy.
At the same time that he was making music, Flowers was writing graffiti with a group called The Last Survivors. His calligraphic, skeletal style was typical of graffiti of the late ’60s, such as the work of Philadelphia’s
Cornbread
or Manhattan’s
Taki 183
.
“At that point, graffiti was just, ‘Here’s my name. Look at how many times I’ve written it. Look at how many places you might see me from one end of town to the other,’” Freddy explained. That was it. A name and maybe a street number, slapped down quick to avoid the police. 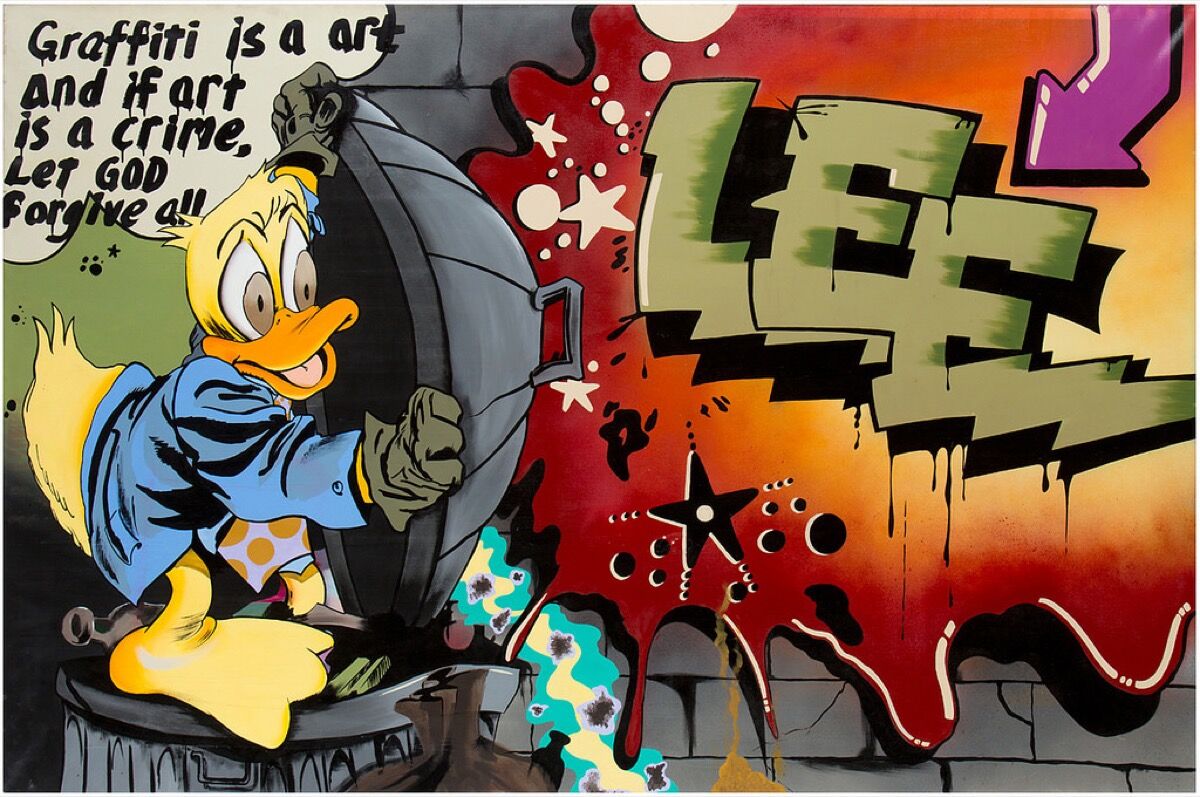 Lee Quiñones, Howard the Duck, 1988. Image via the Amsterdam Museum from the collection of The Museum of the City of New York, via Flickr.

In the ’70s, however, competition spurred by media attention led graffiti artists into an arms race over whose tags were larger, more complex, and had more embellishments. Before long, artists were working on large, intricate pieces.
Lee Quiñones’s Howard the Duck (1970) was a 25-by-30-foot mural painted on the wall of a Lower East Side handball court. The piece shows the eponymous comic character shielding himself with a trashcan lid from an explosive illustration of the artist’s name. Above him, a speech bubble reads, “Graffiti is a art and if art is a crime, let God forgive all.”
Quiñones’s sentiment captured the spirit of subversion that was central for many young graffiti artists. Graffiti was undeniably a creative endeavor, but the act of law-breaking was intertwined with its aesthetic. “You can’t do graffiti on canvas unless you’re doing it in an illegal context,” Freddy told curator Marc Miller in a 1984 interview. “Graffiti is illegal. It’s a crime.”

Henry Chalfant
Mr Seen Mad One, 1980
Eric Firestone Gallery
By 1973, the City of New York was spending $10 million annually to keep graffiti vandalism at manageable levels, and in the previous year alone, police made more than 1,500 graffiti-related arrests. A 1973 poll conducted by Steven Isenberg, the leader of a mayoral anti-graffiti task force, revealed the “vast majority” of New Yorkers did not consider subway graffiti to be art.
In spite of these attitudes, though, graffiti held increasing appeal for collectors.
“[Graffiti] emerged at a time in the formal art world when painting was returning, figuration was returning,” said Greg Tate, the iconic Village Voice columnist, in conversation with Freddy at Pioneer Works.
At the same time, Tate noted, graffiti artists’ practices of appropriation—of pop iconography, or the literal act of appropriating private property—paralleled other conceptual practices of the ’70s and ’80s. He lists
David Hammons
,
Lorna Simpson
, and
Mickalene Thomas
among the next generation of artists who would draw inspiration from the hip-hop ethos. 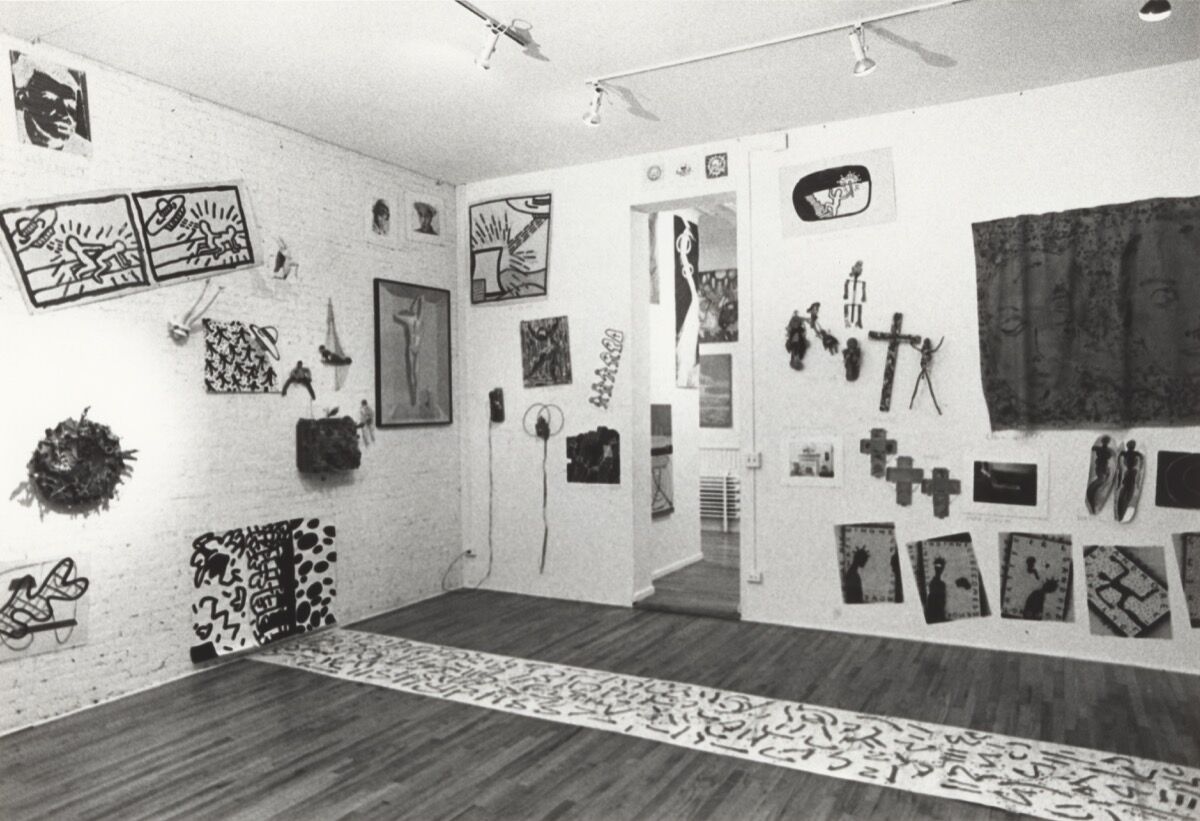 But graffiti’s first major step into the fine art world came with the landmark show, “New York/New Wave,” which opened at MoMA PS1 in February 1981. Curated by Diego Cortez, it placed works by
Futura 2000
and a still up-and-coming
Jean-Michel Basquiat
alongside pieces by
Warhol
and
Mapplethorpe
. The show gave equal attention to the downtown Manhattan punk scene as it did to the hip-hop artists working out of Brooklyn.
Only two months later,
Haring
would host an all-graffiti show, “Beyond Words,” in the narrow space of a Tribeca lounge called the Mudd Club. Freddy and Futura curated the show with the intention of expanding the language of graffiti and elevating its profile above its grungy place in the popular imagination.
And later that year, when underground film actress Patti Astor and partner Bill Stelling opened the doors to the FUN Gallery, the nomadic graffiti arts scene put down roots for the first time in the East Village. 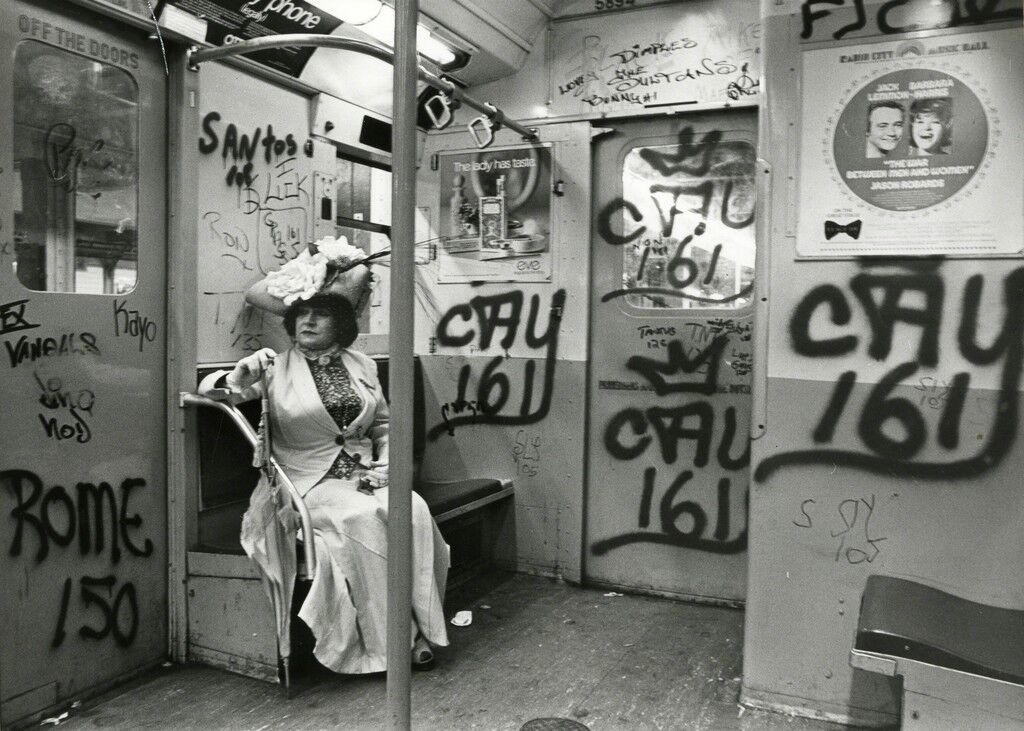 Bill Cunningham
Editta Sherman on the Subway, ca. 1968-1976
New York Historical Society
The cramped, unpretentious space, nestled in an East 11th Street basement, would go on to host shows by artists such as
Dondi
and
Lady Pink
. The gallery quickly became a lightning rod, with Bruno Bischofberger and other high profile collectors visiting to inquire about artists showing there.
But despite these inroads into the art world, many talented young graffiti artists—often black or Latino—still went overlooked. That had its pitfalls, but also benefits.
“SoHo at the time was the primary place for contemporary art and they weren’t really checking for us,” said Freddy of this lack of embrace. “The way the East Village gallery scene developed around us—and for us—we had our own arena to do our own thing.”
“People came to us on that platform because we were making noise.”
Mitch Sawyer
Related Stories