A Brief History of Polaroids in Art, from Ansel Adams to Andy Warhol (and Beyond) 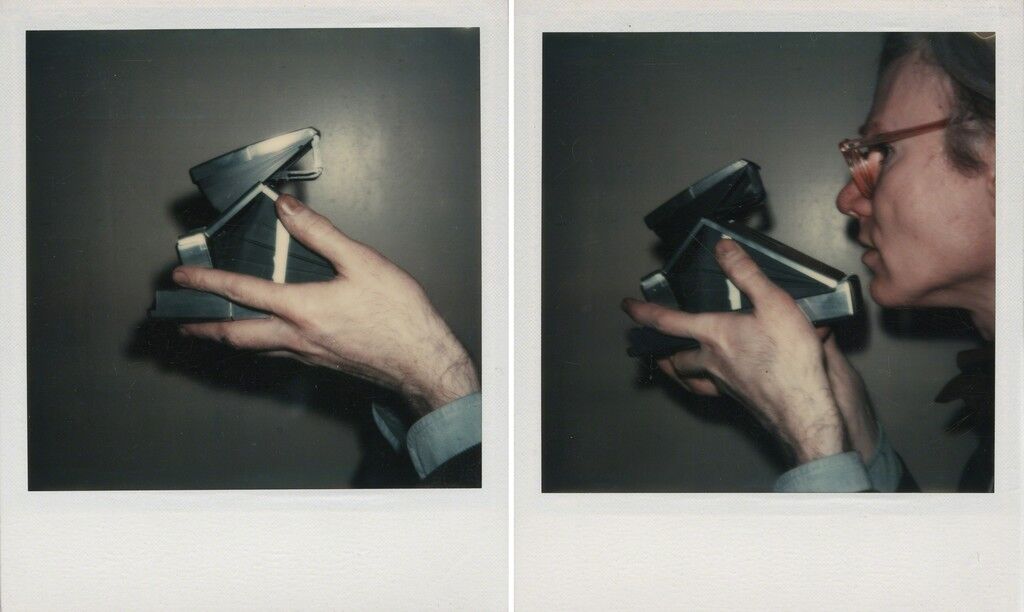 Andy Warhol
Self-Portrait, 1973
Christie's Warhol Sale
Beginning in the late 1940s, the Polaroid Corporation would change the face of contemporary photography, both for everyday consumers and for artists. While instant cameras were originally marketed to families and amateur shutterbugs, the company was also successful in engaging fine artists via their Artist Support Program, which offered creatives like
Robert Rauschenberg
and
Andy Warhol
free film and studio time. Those collaborations would lead to decades of fruitful uses (and often misuses) of the developing technology.
Things got tumultuous for Polaroid in the early 21st century, and after a bankruptcy and a series of convoluted sales, the company as it was once known is now essentially defunct. However, its artistic legacy is bolstered by nearly perennial books and survey exhibitions, like “The Polaroid Project: At the Intersection of Art and Technology,” on view at the Amon Carter Museum of American Art through September 3. That exhibition covers the bold and eclectic range of work made across decades, and with various types of Polaroid technology—from
Ansel Adams
’s beautiful vistas of Yosemite from the mid-1950s, to a 2009
Nobuyoshi Araki
snapshot of Lady Gaga.
Fueled by nostalgia for film and analog technology, our collective fascination with Polaroid shows no danger of abating. 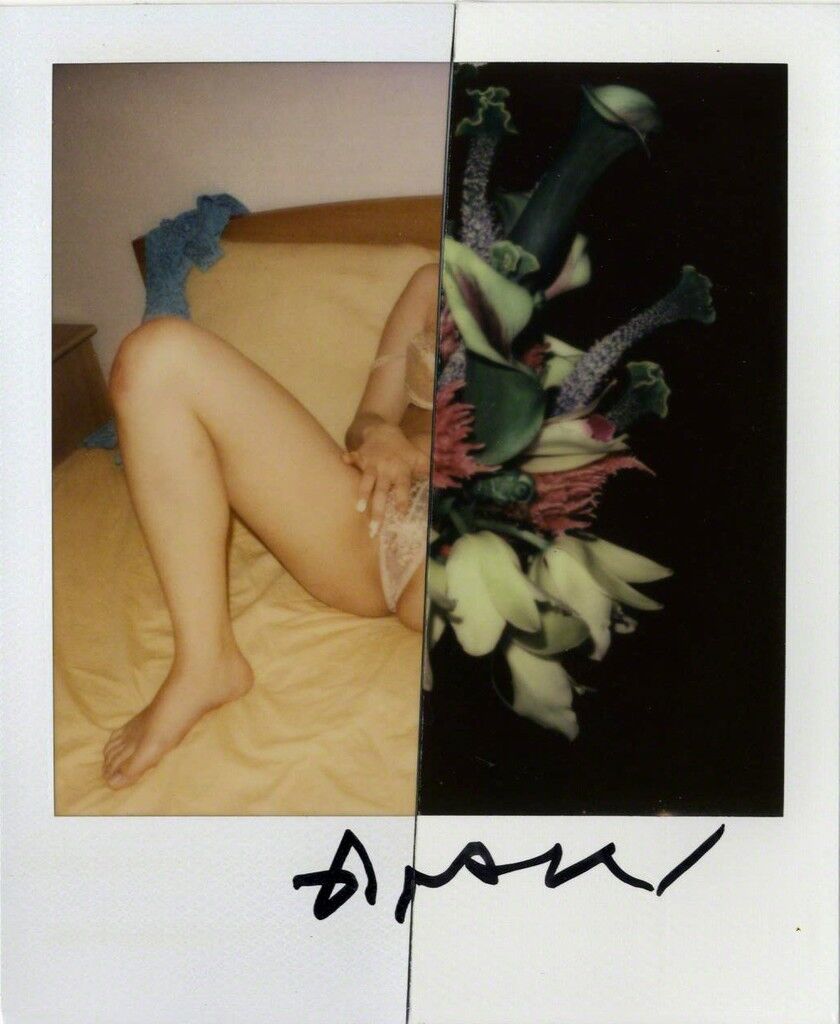 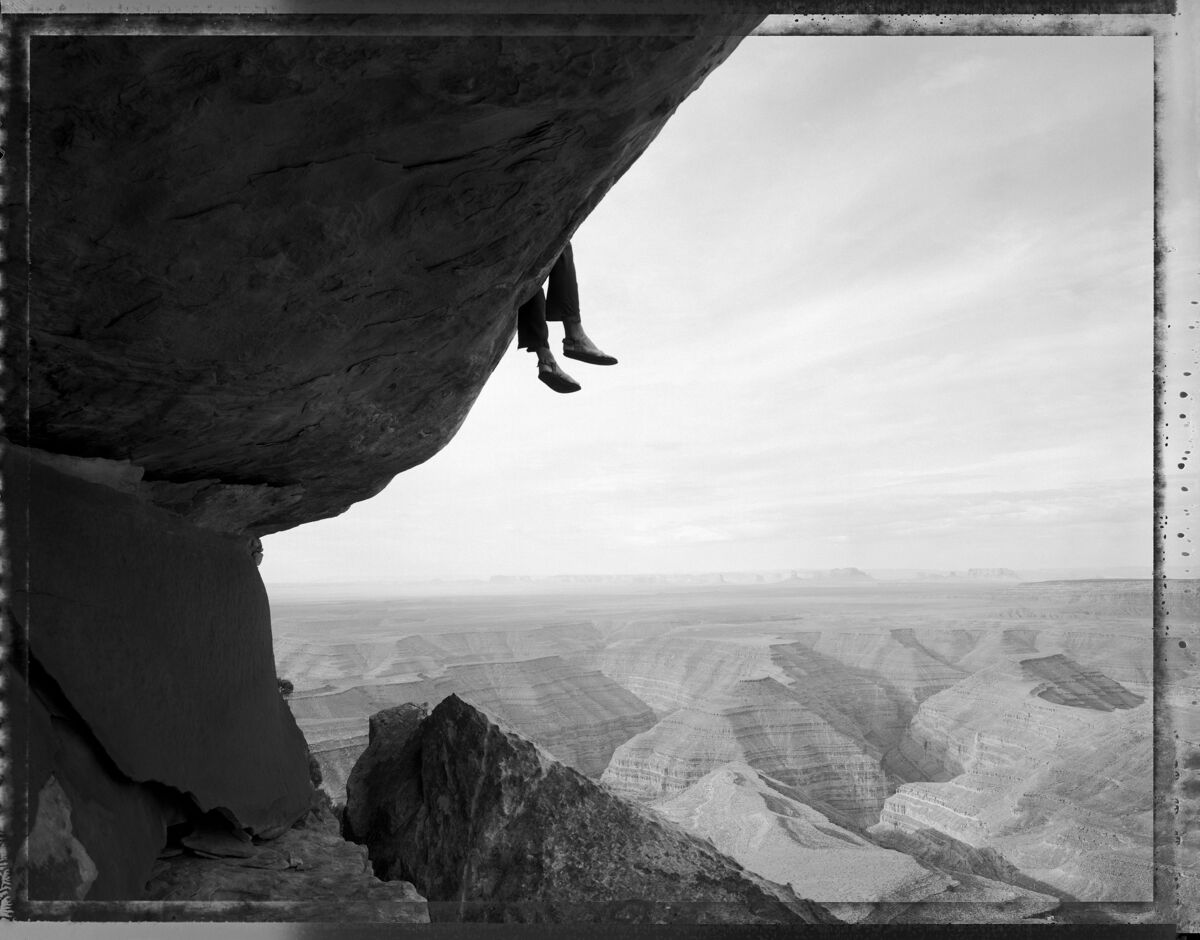 From the onset, the company provided an outlet for dilettantes, avant-garde experimenters, nightlife chroniclers, and collagists, as well as traditional photographers who appreciated the high caliber of the film itself.
The long journey began with Adams, one of the world’s most famed landscape photographers, who was a friend of Polaroid scientist and co-founder Dr. Edwin Land. Adams would sign on as a consultant with Polaroid in 1949. “He was working with cameras, films, all of the inventions, testing what came out of the laboratories,” explains Barbara Hitchcock, who worked in the company’s marketing division during the 1970s and ’80s, and who co-curated “The Polaroid Project.” Adams performed field tests and took endless notes that were used to improve the newest Polaroid products, enlisting friends and peers along the way. “That was the goal,” Hitchcock says, “to show that this new film had great quality, and wasn’t just a gadget-y thing.”
Initial Polaroid film produced only sepia-toned prints, followed by black-and-white in 1950, and color images in 1963. Some models produced reusable negatives, allowing for multiples or editions, while others created unique one-off prints. For contemporary artists, it was often the latter option that proved the most interesting. 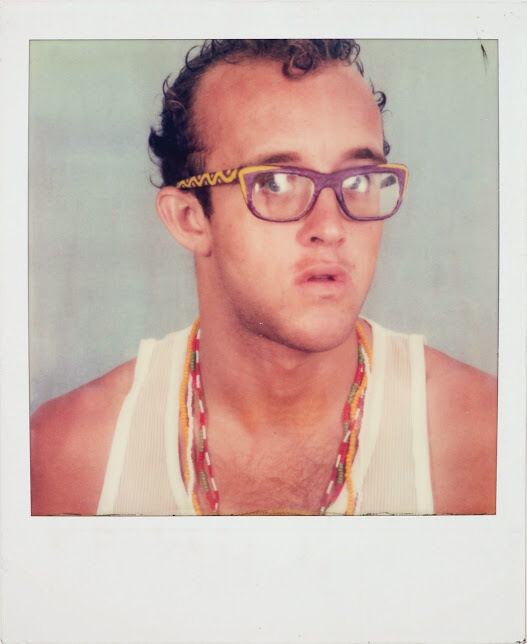 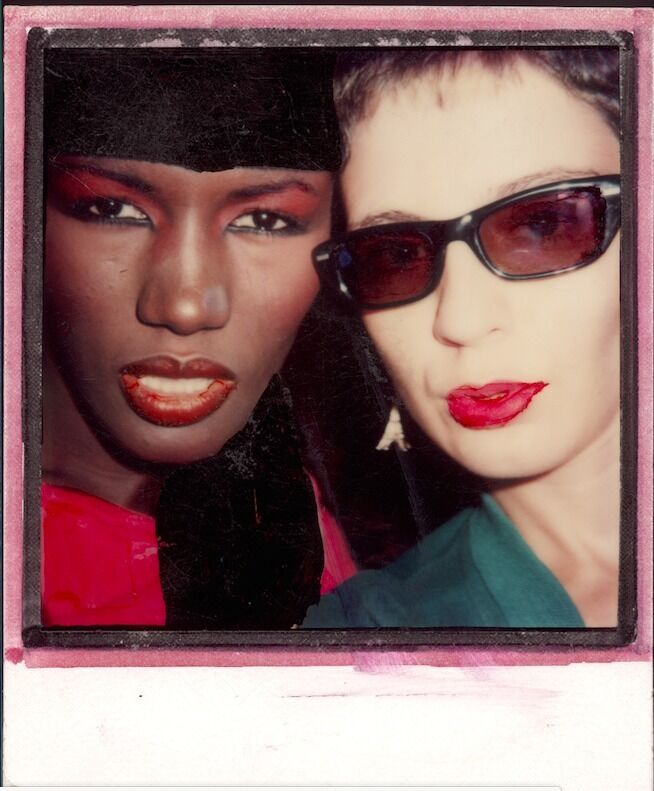 Maripol
Selfie Polaroid with Grace, 1979/2015
Spring/Break: Benefit Auction 2016
Advertisement
What exactly has made Polaroid so tempting for artists? William Ewing, director of curatorial projects for Thames & Hudson, points to various factors. “First, instantaneity—which meant evaluation and revision immediately, rather than sending stuff to a lab and forgetting about it for a while,” he says. “Also, the colors; everyone speaks of the ‘only Polaroid can do this’ quality.”
Also important, he says, was the sense of community—Polaroid Corporation made them feel valued and welcomed. “I think artists also felt they were on a technological cutting-edge,” he adds.
At the same time, Polaroid technology harkened back to early photographic processes before film—like daguerreotypes or tintypes—that created unique objects, says Erin Barnett, the director of exhibitions and collections at the International Center of Photography. “Once it became an infinitely reproducible medium, photography moved even farther away from ‘fine art,’” she explains. “I imagine that artists liked the idea of creating a singular, non-reproducible object.” 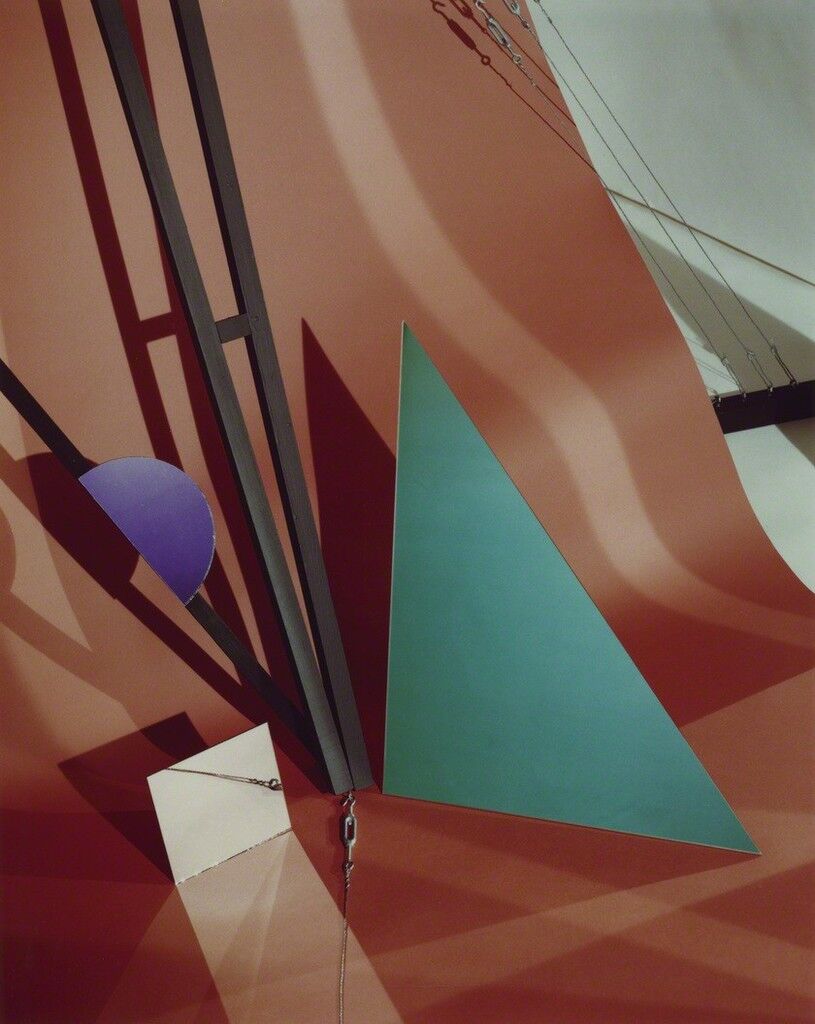 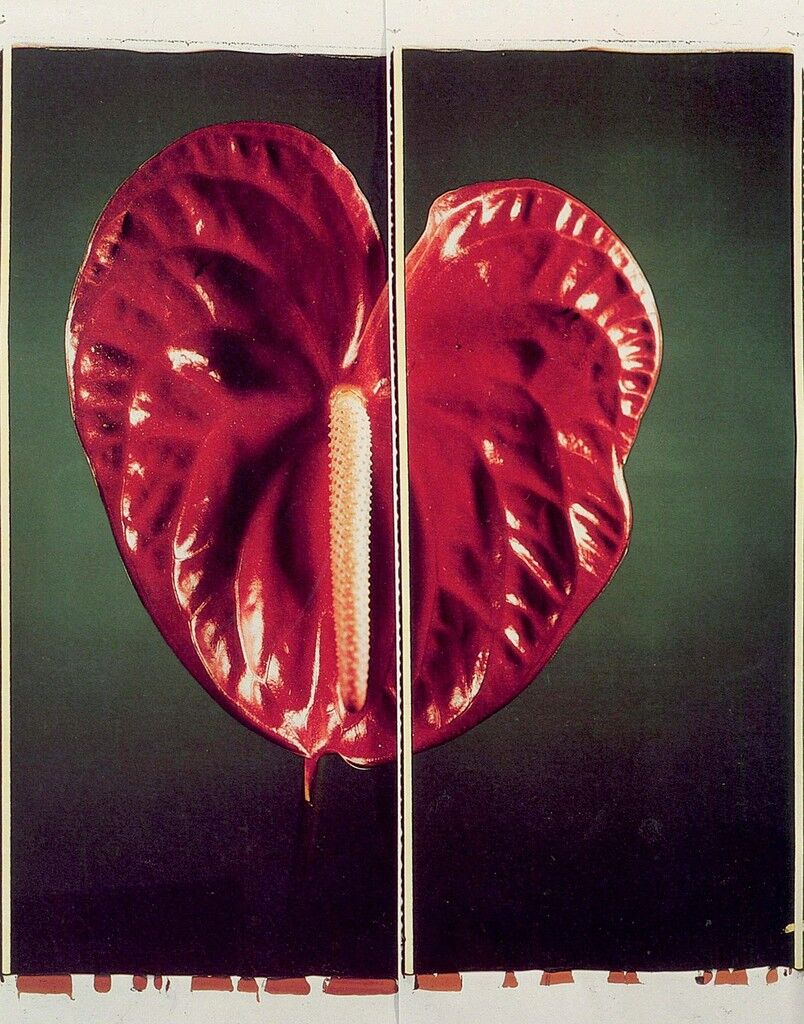 Chuck Close
Anthurium, 1987
Parrish Art Museum
That was especially true if that object could be augmented or altered in creative ways. Those opportunities increased with the launch of the SX-70 model camera, which hit the market in 1972 and whose self-developing, peel-apart film could be manipulated during and long after the exposure. “The advent of the SX-70 was really interesting for consumers, but also viewed by artists as something to manipulate” as a creative material, Hitchcock explains.
Those manipulations weren’t always celebrated by Dr. Land, the man behind the technology itself. He had reveled in the SX-70 as the culmination of Polaroid’s all-in-one, simple and instant development system. “He viewed the SX-70 as the dream he had back when he first thought of the possibility of instant photography,” Hitchcock says. “The package that came out at the end of it was total. You didn’t have any paper to throw away, and it made beautiful images.”
It was also the most consumer-friendly option yet produced by Polaroid. “You could have the SX-70 on the kitchen table, and in the early morning catch a ray of sun on the flowers—and grab it,” Ewing says.
But artists—a notoriously unpredictable lot—didn’t always abide by the rules or product manuals; many of them started to tweak, prod, and push the boundaries of what Polaroid film could or should do. “In the 1970s, there was an explosion of creativity,” Hitchcock says. “For many people the Polaroid was like an empty canvas. They could add or subtract, do something very personal that was going to be the stamp of who they were.” 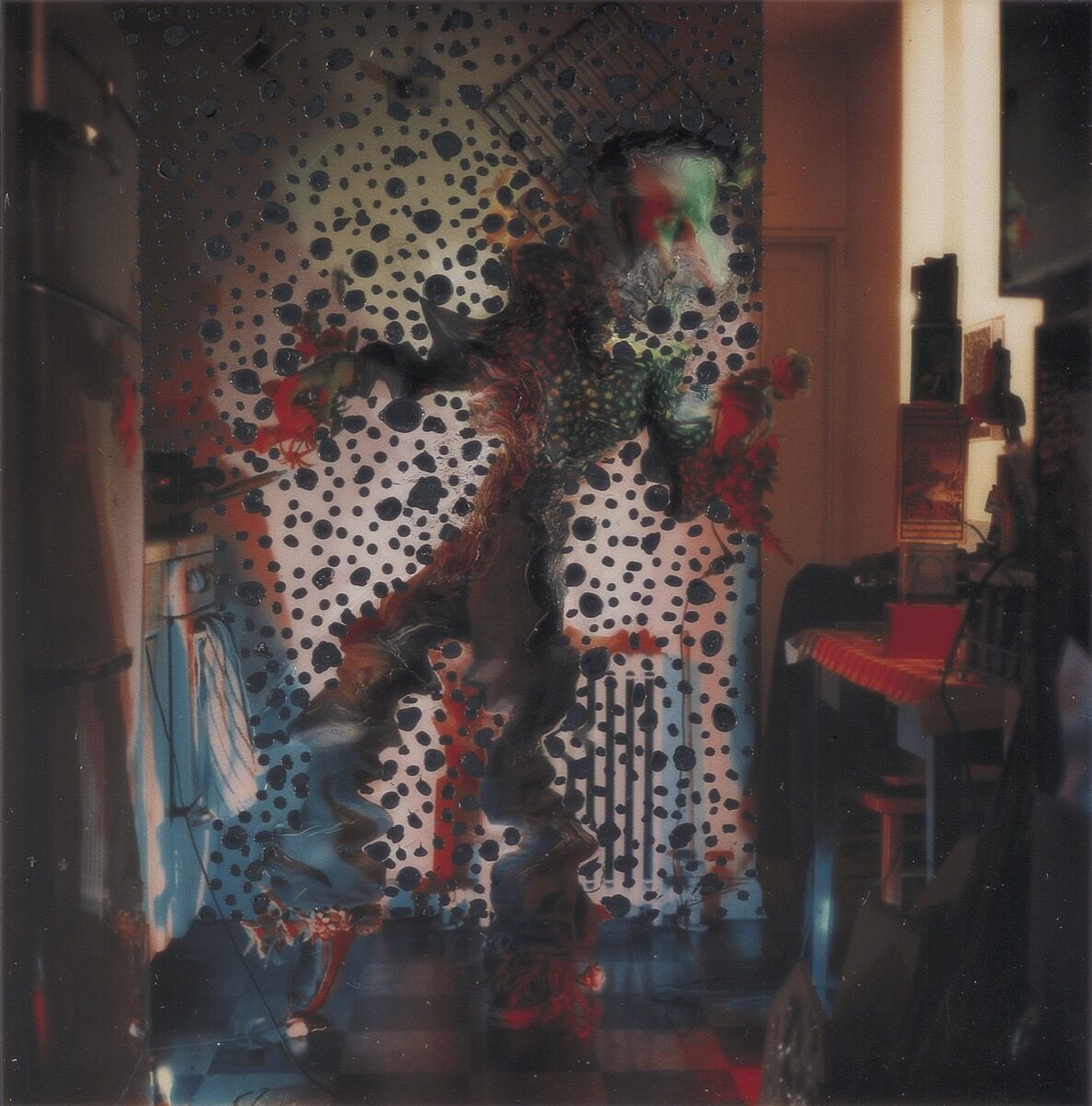 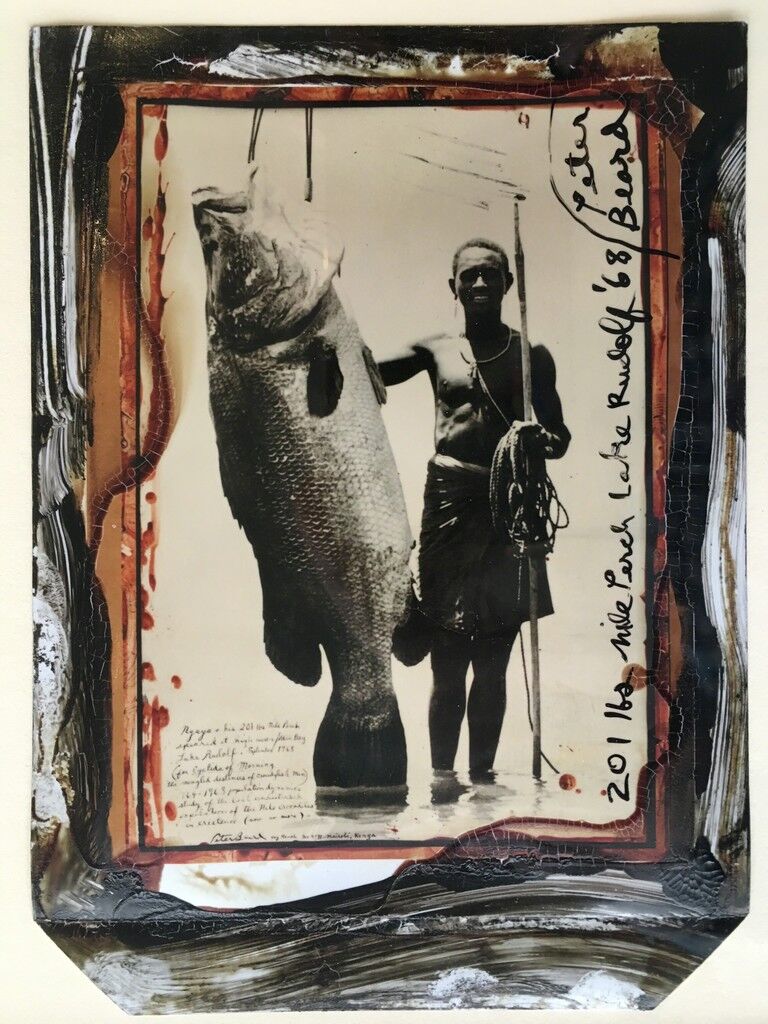 Peter Beard
201 lbs Nile Perch, Lake Rudolf '68, 1968
Fischtein Fine Art
Lucas Samaras
was one such artist who, through a little creative destruction, was able to find an entirely new outlet—though it’s unclear if Dr. Land and Polaroid celebrated his interventions initially. (“Whatever their private thoughts were at the time,” Samaras says now, “Polaroid was a fabulous gift for me.”)
Samaras’s Polaroid work came in two phases. The first was his “AutoPolaroids” series, from 1969 through 1971, in which he added abstract and geometric elements atop already developed photographs, many of them self-portraits.
But his 1973–76 “Photo-Transformations” series took things one step further, exploiting something of a technical glitch in order to disrupt norms. The artist discovered that the early SX-70 film could be altered during the development process, by hand or using various tools and implements. These experimental self-portraits are alternately psychedelic and horrific—imagine an analog version of Photoshop’s “liquify” function pushed to absurd extremes. Singular body parts (an eye, a mouth) appear in focus, floating in a cosmic blur of modified photographic dyes. 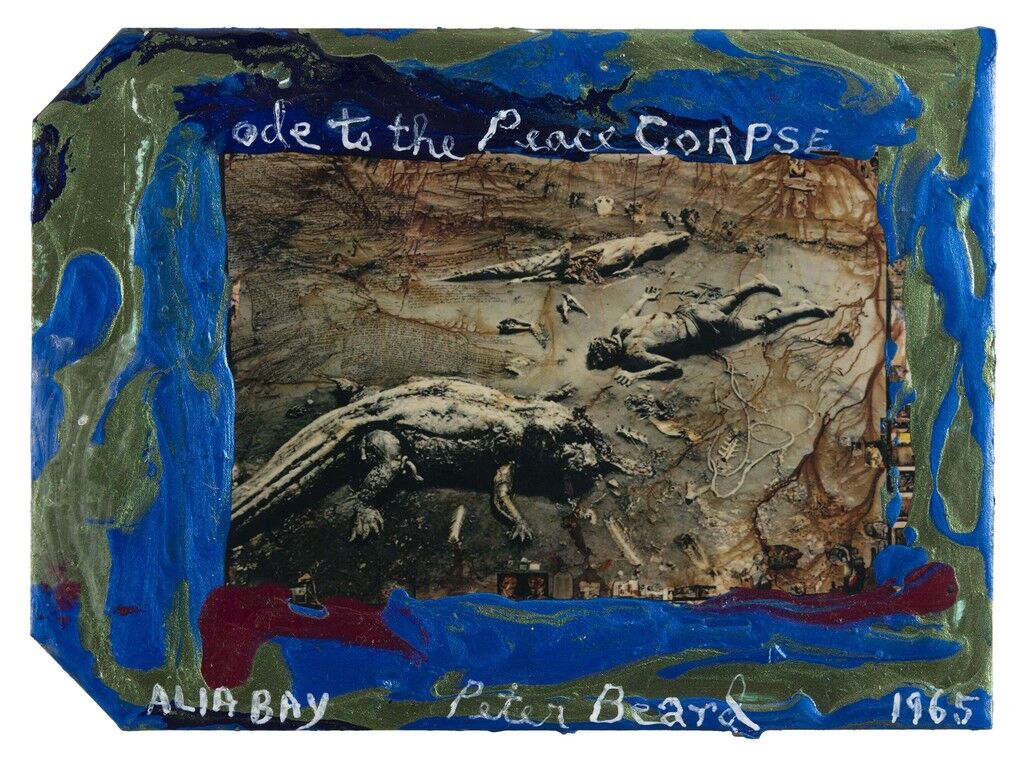 Peter Beard
Ode to the Peace corpse, Alia Bay, 1965
Repetto Gallery
The list of artists who refused to be polite with Polaroid film is long.
Peter Beard
, from the 1960s onward, would add text, ink, paint, and occasionally blood to the photographic surface. Artist John Reuter—who became Polaroid’s senior photographer in 1978, and later helmed the company’s large-format 20X24 studio—was also a prolific breaker of convention, combining various techniques to generate impossible compositions (using paint or collage, or lifting the emulsion from a sheet of film and transferring it to a new surface). And starting in the late ’70s, husband-and-wife duo
Anna and Bernhard Blume
would slice and dice SX-70 images to create bizarre, and often disturbing, collages.
Of course, it wasn’t just Polaroid’s fungibility that made it interesting for artists. This was instant film, after all, so part of the appeal lay in its speed and immediacy. This doubtlessly appealed to the late Italian photographer
Luigi Ghirri
, whose prolific use of Polaroid to capture everyday scenes in the 1970s and ’80s possesses a proto-Instagram spirit (deceptively casual, but still intensely artful). A similar effortlessness is at play in Polaroids from the same time period by Arno Bauman, who used the medium to capture simple but poetic moments: a bowl of Smarties on a table; a woman’s bright-red fingernails popping against her yellow purse. 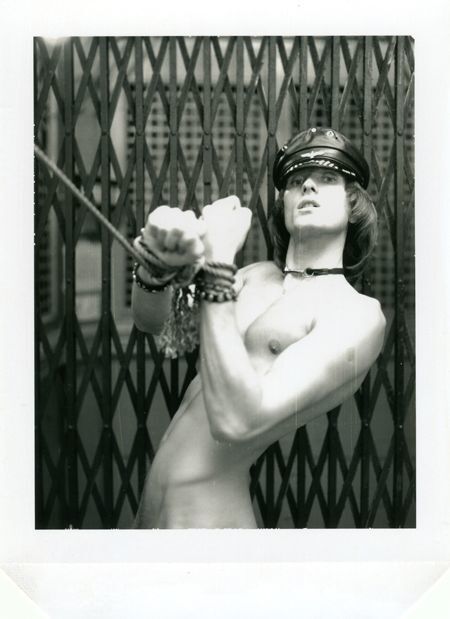 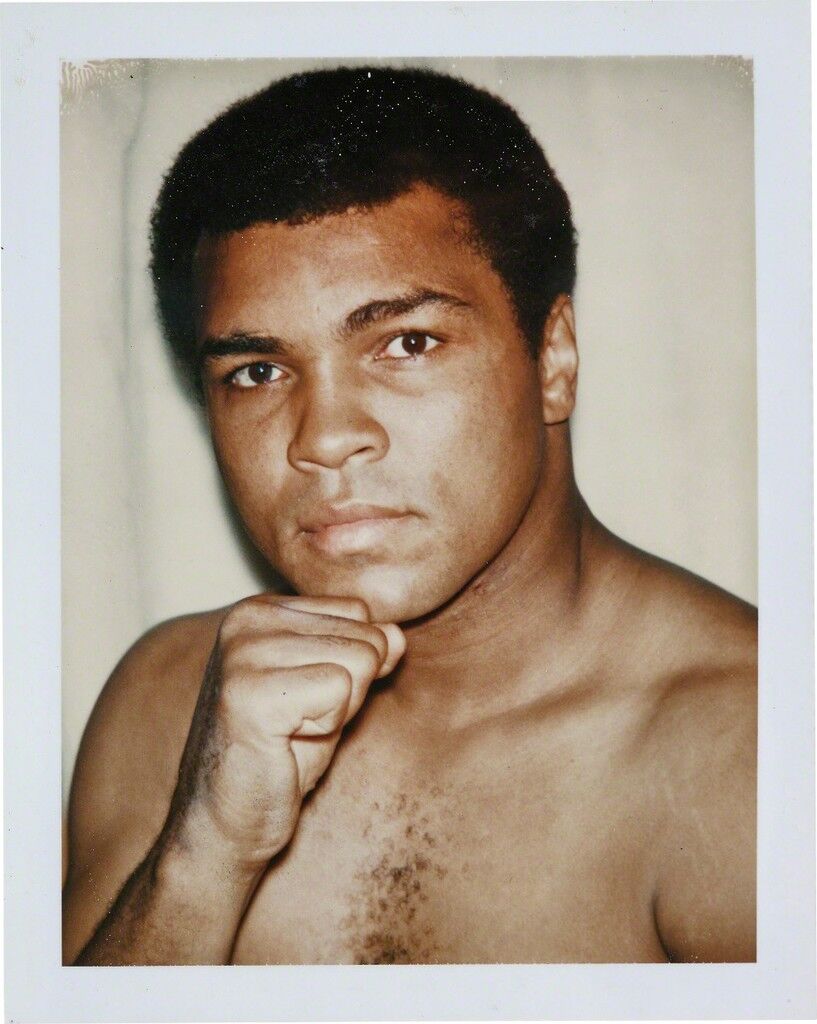 Andy Warhol
Muhammad Ali, 1977
Phillips: Photographs (May 2017)
Polaroid’s instant nature was a game changer for many artists in the days before digital photography, enabling an image to be tweaked and adjusted in real-time. “You could build the picture until you’ve got it, in a matter of minutes or hours,” Hitchcock says. “You’re looking at the photographs while you still have the subject right in front of you. This learning curve was so quick—you could see and make the changes right away that would make your picture sing.”
The technology rewarded artists who carefully labored with it in the studio.
Marie Cosindas
, beginning in the 1960s, constructed elaborate sets—everything from still lifes with bunches of asparagus to lush floral arrangements—in order to create incredibly painterly color photographs.
Robert Mapplethorpe
picked up Polaroid in earnest in the 1970s, creating indelible black-and-white portraits and staged scenes.
Those measured efforts stand in contrast to the working methods of Warhol, an artist forever associated with the Polaroid, and one who clearly prized quantity over quality. Warhol’s camera of choice, the Big Shot, was used to create an array of selfies and portraits of faces both unknown and famous, from Sylvester Stallone to Debbie Harry and
Jean-Michel Basquiat
. His Polaroid photography was, in some ways, a marriage of the company’s dual audiences—the everyday consumer and the fine artist—transforming the off-the-cuff snapshot into high culture. 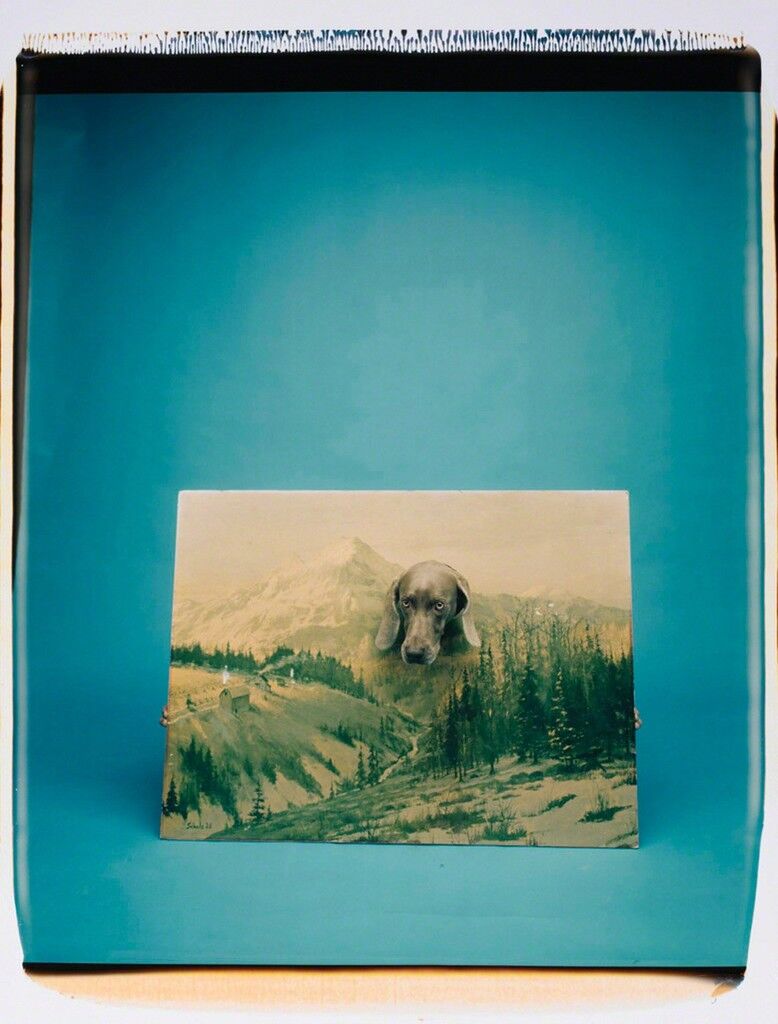 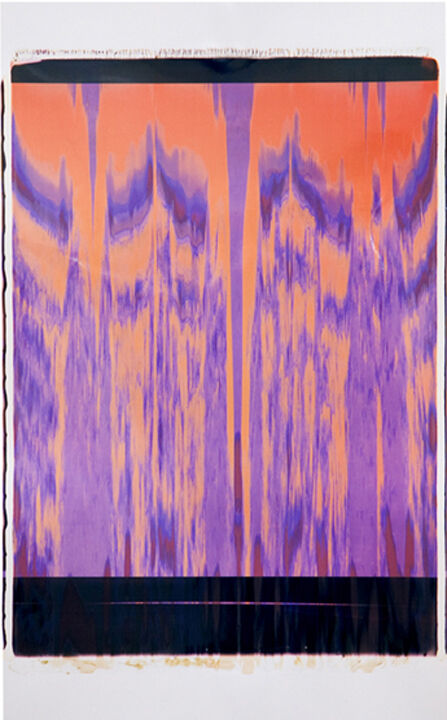 Ellen Carey
Moire Multichrome (Orange and Purple), 2007
JHB Gallery
The 1970s and ’80s brought new technological developments from Polaroid, the most notable being the large format 20X24 camera later beloved by
William Wegman
,
Chuck Close
, and Elsa Dorfman. That camera, which takes 20 x 24-inch sheets of film, allowed for intensely personal warts-and-all portraits—of humans and, of course, Weimaraners. Most artists who worked with the camera developed a relationship in which they would gift certain prints to Polaroid’s collection in exchange for use of the equipment.
Yet even this camera’s oversized prints tempted artists to push technical boundaries in off-label ways—
Ellen Carey
would use the film to innovate her signature series of “Pulls,” in which a purposeful mishandling of the developing process leads to vibrant abstract compositions.

Or consider
Dawoud Bey
’s 20X24 portraits, which combine four distinct photographs to create a single, fractured composition. (The multi-print, puzzle-like grid is a tactic that has long been favored by Polaroid users, from
David Hockney
’s sprawling montages to
Jimmy DeSana
’s iconic 1978 Talking Heads album cover that incorporated over 500 individual images.)
Polaroid’s popularity didn’t abate in the 1990s and 2000s. Its raw and impromptu spirit was a natural fit for downtown New York artists like the late
Dash Snow
(who left behind around 8,000 instant photos) as well as
Ryan McGinley
—who is currently exhibiting 1,700 of his early Polaroids at the Museum of Contemporary Art Denver, on view through August 20.
Mike Brodie
, chronicler of the nomadic crust-punks of America, cut his teeth in the 2000s using an SX-70 (his original moniker was “the Polaroid Kidd”).
Jeremy Kost
, taking a nod from Hockney, would create perspective-bending Polaroid collages, a sort of
Cubist
effort to capture drag queens or beautiful young men. 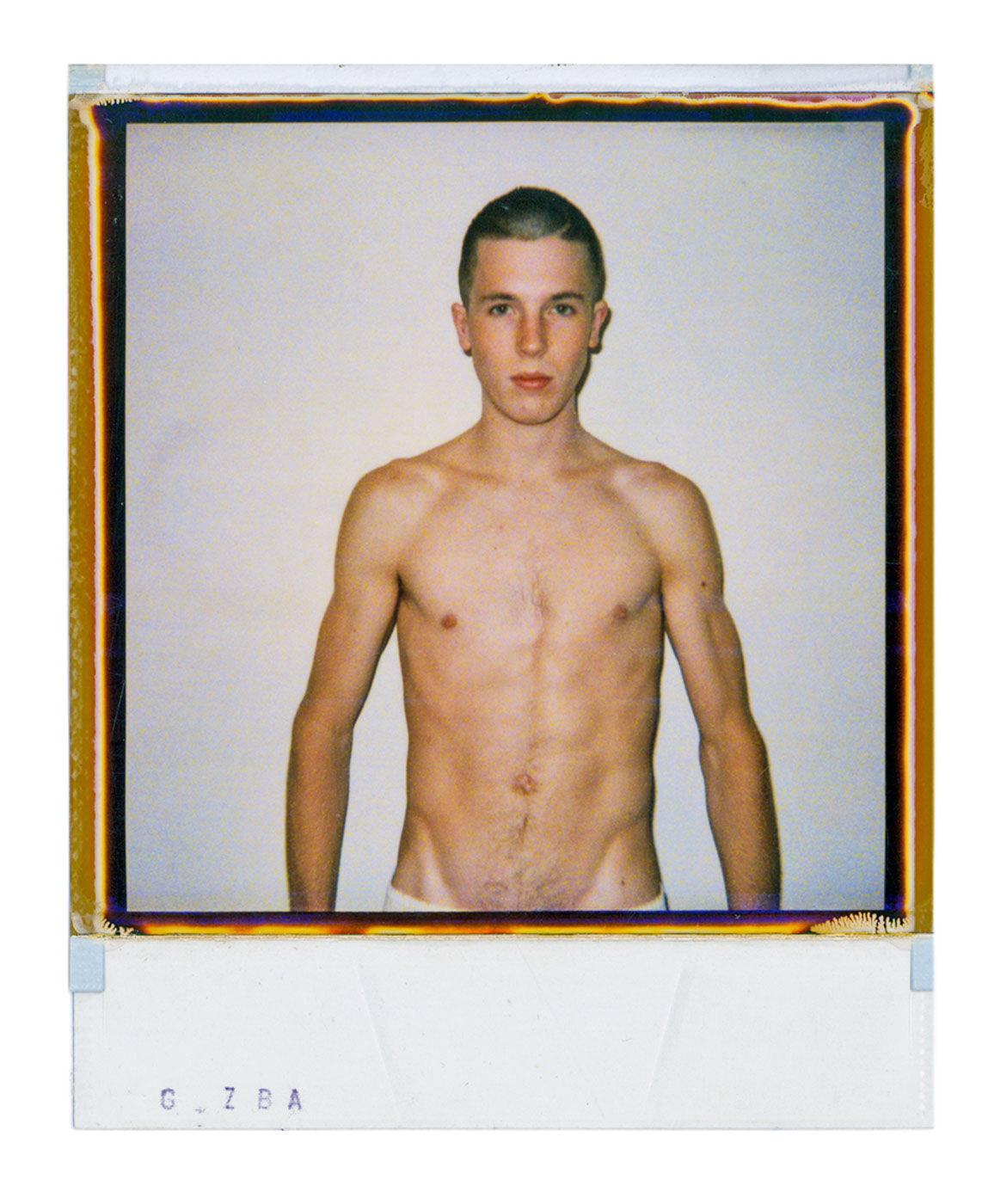 Ryan McGinley self portrait, 1999. Courtesy of the artist and Team Gallery. 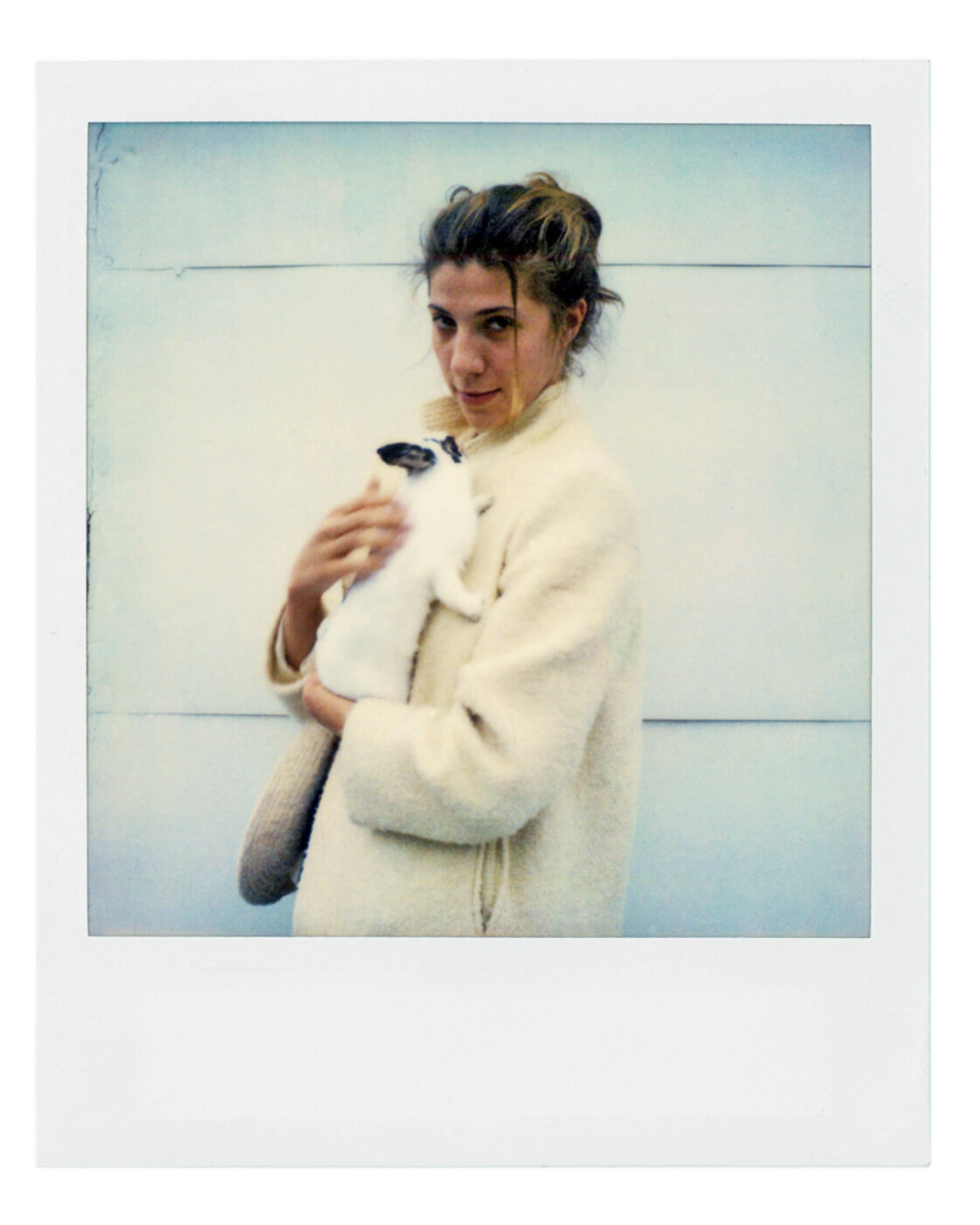 Ryan McGinley, Agathe, 2000. Courtesy of the artist and Team Gallery.

Polaroid’s collaborations with contemporary artists across the decades enabled the company to slowly amass a collection of thousands of prints. That trove was sadly split up in order to fulfill bankruptcy obligations around 2009. Around 10,500 works from the former Polaroid Collection are now held by an anonymous owner; 4,500 Polaroids are owned by the WestLicht Gallery of Vienna, Austria; 1,200 prize prints were auctioned by Sotheby’s in New York. Various types of Polaroid-style film continue to be available via the Impossible Project, which attempted to reboot production beginning in 2008.
Though its glory days might be behind us, we’re still untangling the peculiar and lasting hold that this photographic technology had on the artistic imagination.
“As a company of innovation and exploration,” Hitchcock says, “creativity was the mantra of Polaroid.”
Scott Indrisek
Related Stories