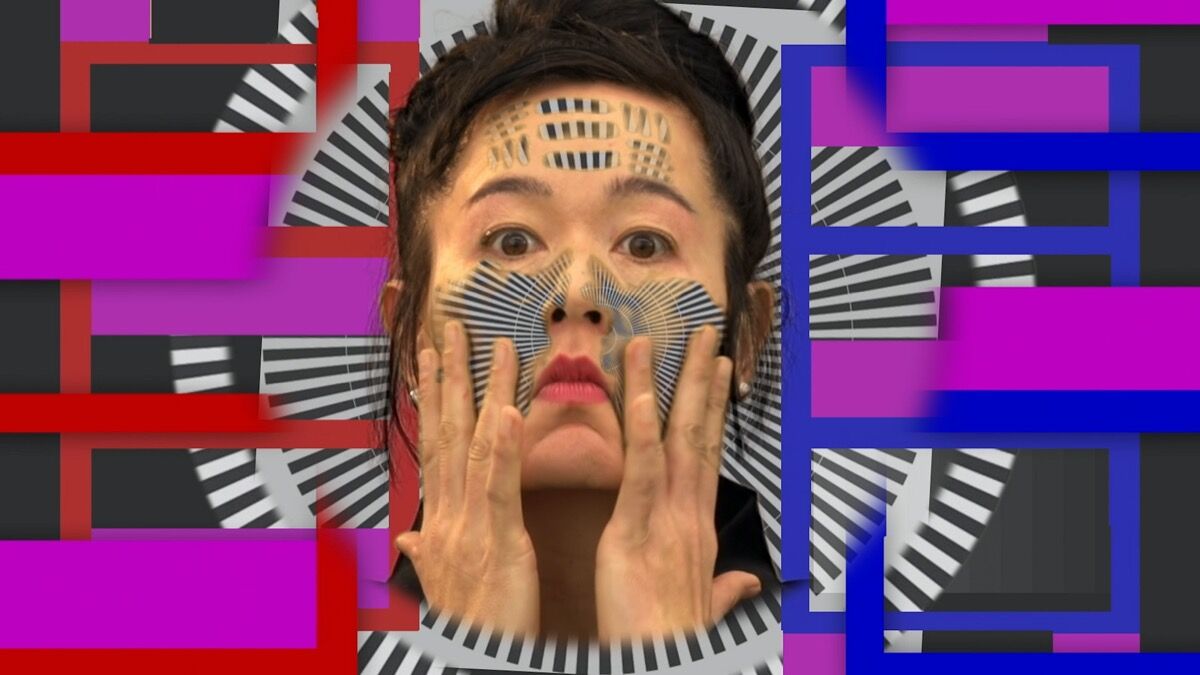 Hito Steyerl, still from How Not to Be Seen: A Fucking Didactic Educational .MOV File, 2013. Courtesy of the artist; Andrew Kreps Gallery, New York; and Esther Schipper, Berlin.

Conspiracy theories, racism, police violence, omnipresent surveillance, artificial intelligence, data exploitation, and digital overload are just a few of the up-to-the-minute themes of
Hito Steyerl
’s new solo exhibition at the K21 museum in Düsseldorf, titled “I Will Survive.” Even the pandemic features in her latest work, which she developed during lockdown for the exhibition.
The Düsseldorf show is the first comprehensive overview of Steyerl’s art in Germany, her home country. She lives and works in Berlin, where she is a professor of experimental film and video at the city’s University of the Arts, and her video works were shown at Documenta 12 in 2007 in Kassel and at the Venice Biennale in 2015 and 2019. After it closes in Düsseldorf on January 10, 2021, “I Will Survive” will open at the Centre Pompidou in Paris in February. 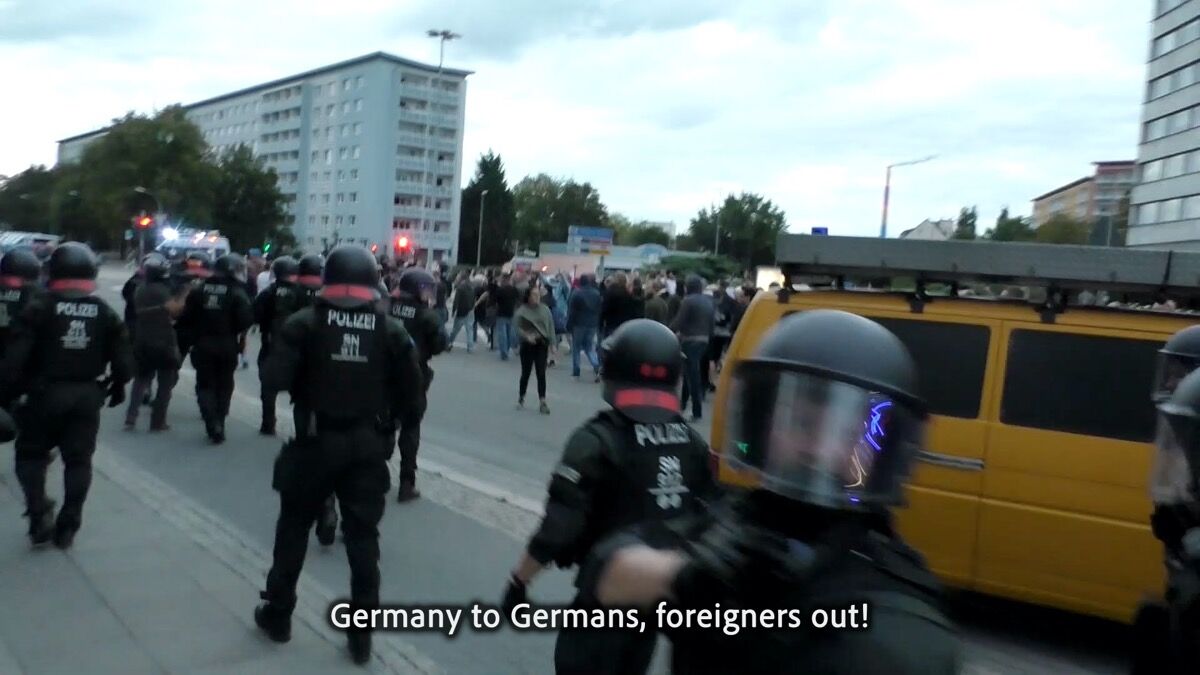 The exhibition encompasses about two dozen video works from the past 30 years, and it is not just challenging to take it all in on a single visit, it’s actually impossible. Even a whole day at the museum would not be long enough to see each work from start to finish. But the value of the overview (it is not called a retrospective—after all, Steyerl is only 54) is in seeing how her work has developed.
“I Will Survive” begins with Steyerl’s films from the 1990s focused on German society and politics, screened on boxy, outdated television sets with subtitles of dubious quality. It ends with her recent, complex, and slick multiscreen installations that encompass entire rooms.
Yet even the early films, while technically unsophisticated by today’s standards, are as relevant as ever in terms of content, addressing attacks on foreigners and nationalism in post-reunification Germany. In the works Babenhausen (1997) and Normality 1-X (1999–2003), she explores anti-Semitism and hate crimes by right-wing extremists. Over the past three years, the number of anti-Semitic attacks in Germany has almost doubled; just this month, a Jewish student was attacked outside a synagogue in Hamburg. 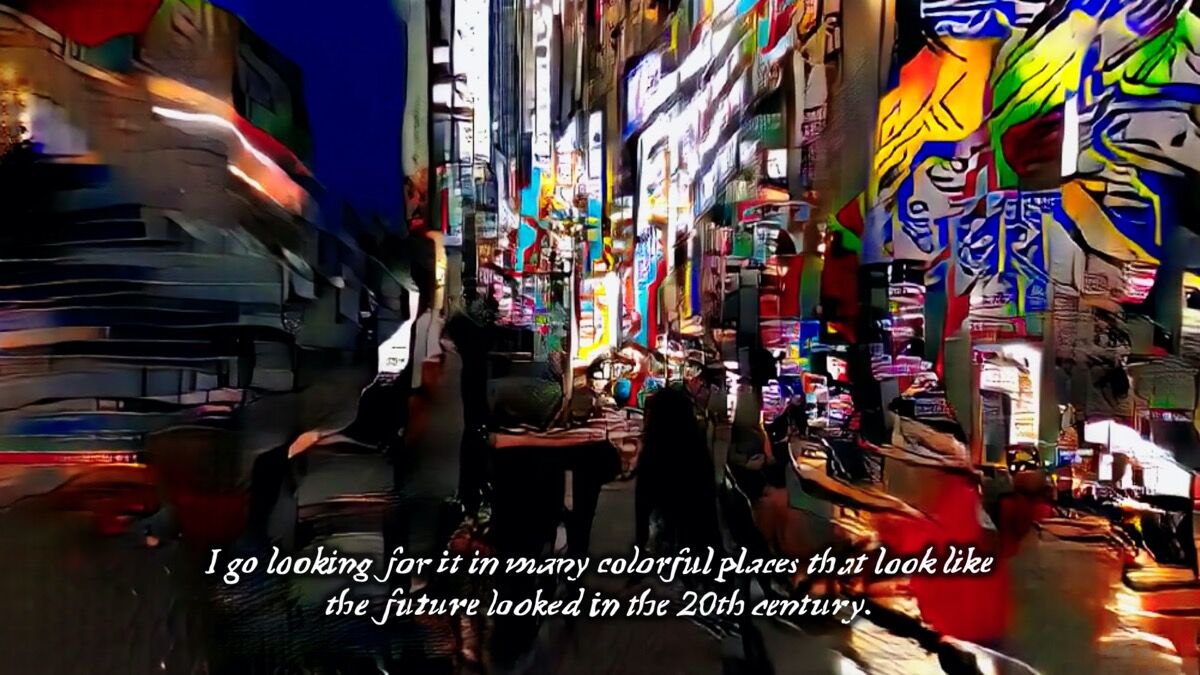 Advertisement
“In times of crisis and transformation, we need nonconformist artists like Hito Steyerl more than ever,” said Susanne Gaensheimer, director of the North Rhine-Westphalia art collections, which includes the K21 museum.
Steyerl’s latest work is not only uncompromising in its critique of contemporary society, it also demands a lot from her audience. SocialSim (2020), produced partly during the pandemic lockdown, is the centerpiece of the exhibition. It has so many interwoven storylines, themes, figures, facts, and effects—all accompanied by throbbing disco beats—that it’s completely overwhelming. It can be described as a reflection of our society’s digital media overload that has only been exacerbated by the pandemic. 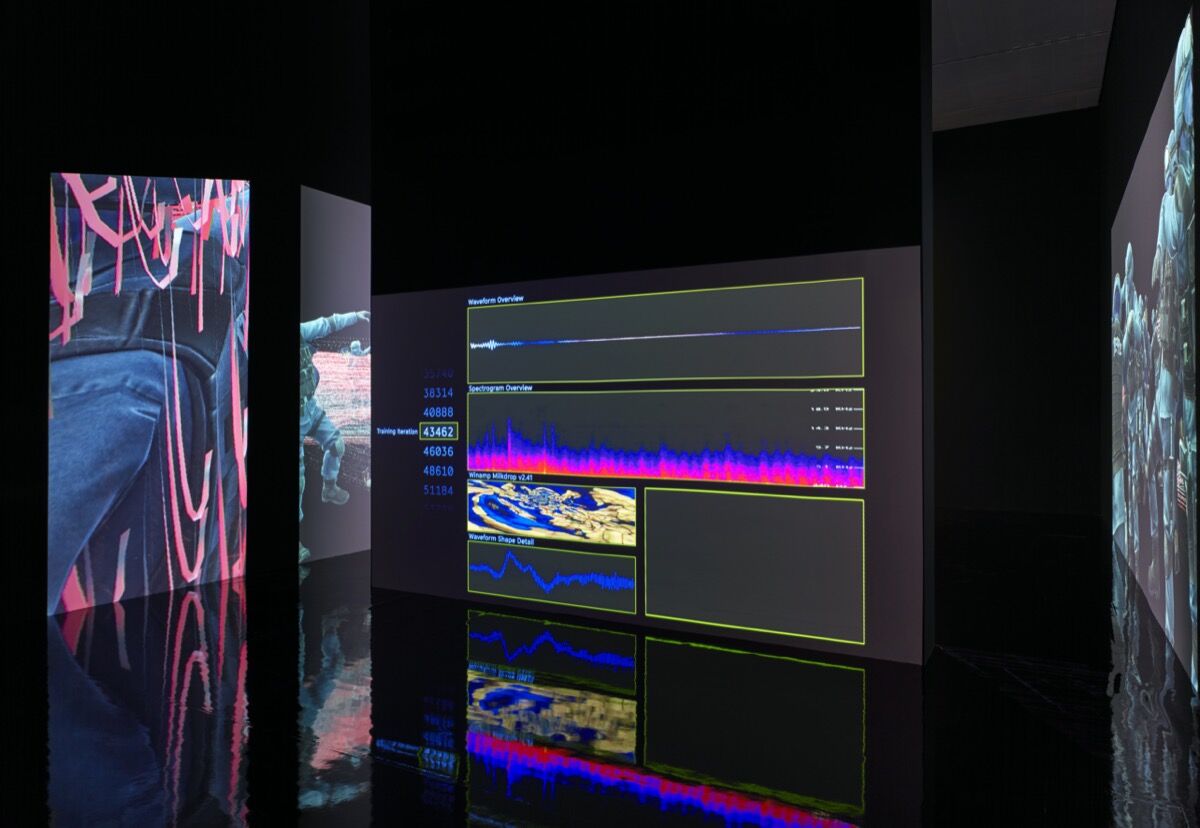 Video-game-like avatars of policemen are projected onto the black walls of a room of the museum. As they come into contact, they infect each other—not with coronavirus, but with a disease that prompts them to dance until they combust. The avatars respond to a series of parameters, adjusted daily, which relate to conspiracy theories, authoritarian tendencies, and pandemic denial. One of these parameters is the number of death threats sent from police servers every day in Germany.
The main screen in the installation becomes a video-game-style dashboard with confusing quiz questions and figures and charts on the avatars’ performance. An image flashes up of Salvator Mundi, the long-lost
Leonardo da Vinci
work that became the most expensive painting ever sold when it fetched $450 million at Christie’s in 2017. Its whereabouts have since been in doubt. “Help, I have been kidnapped!” an animated Salvator Mundi says. “I need to save the world!” 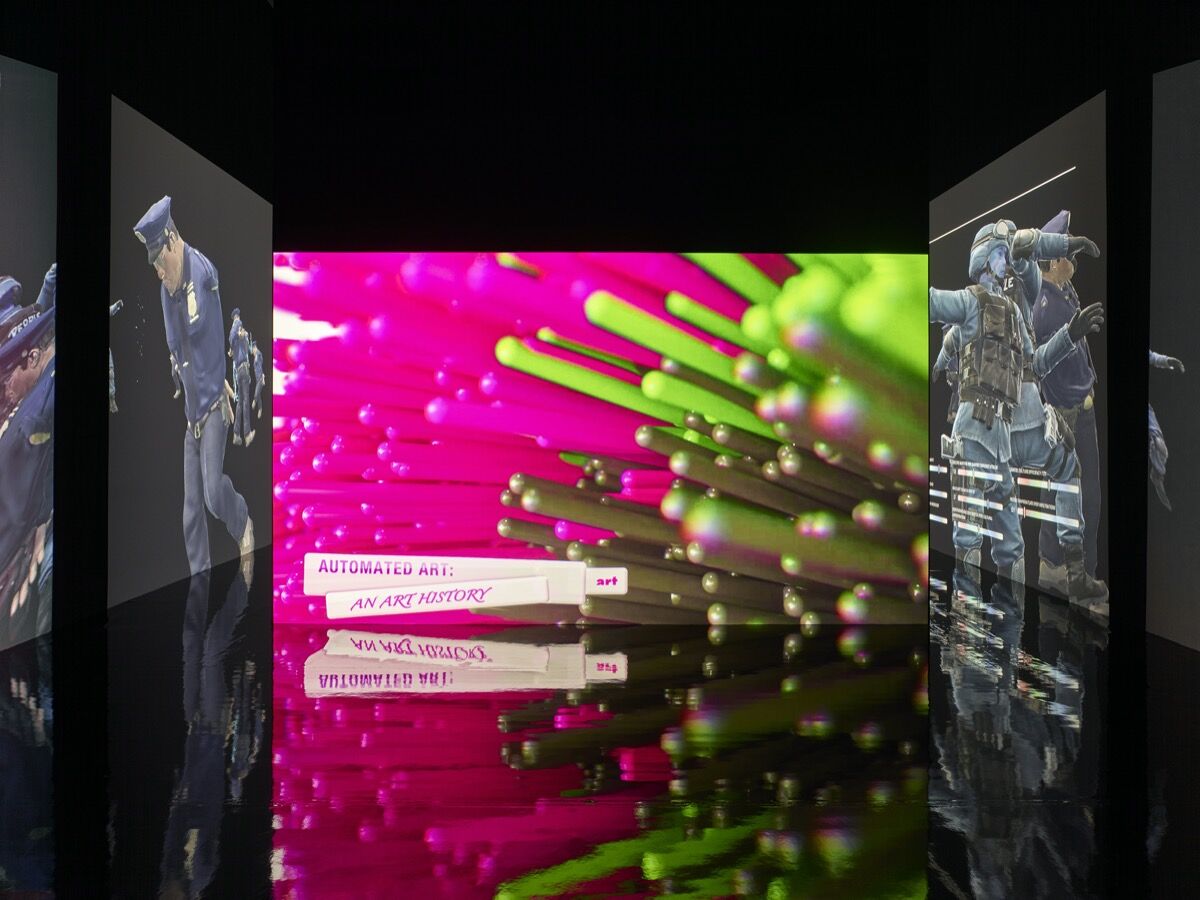 The world Steyerl shows us is one that needs saving. She writes in the catalog that “the pandemic is reinforcing all the trends we have seen over the past four years—isolationism, authoritarianism, de-globalization, anti-immigration, fragmentation, the exploitation of fear and data grabbing.”
These are all themes that recur in her work—as does her critical view of museums and the art market. One of the highlights of the exhibition is the 2012 work Guards, for which Steyerl interviewed two members of the security staff at the Art Institute of Chicago, both with prior experience in law enforcement or the military. They describe harrowing incidents involving shootings and domestic violence in their careers. One demonstrates how he would case the museum if a rogue gunman were on the loose.

The camera lingers on the art in the hallowed halls of the museum behind them; paintings by
Willem de Kooning
,
Gerhard Richter
,
Alex Katz
,
David Hockney
, and others. The guards’ horrific stories introduce terror into the museum, turning it by stealth into a crime scene. As the drama intensifies, the works in the background become more militaristic: a
Rineke Dijkstra
photograph, for instance, is altered, featuring a security officer posing on a Croatian beach.
The work Power Plants (2019), which was shown at London’s Serpentine in 2019, imagines vivid flowers of the future, portrayed growing and blooming in augmented reality on a set of LED screens arranged on stem-like scaffolding. Scrolling texts attribute wondrous properties to these plants—one can cure social-media addiction, for instance. In an extension of that piece, This is the Future (2019), the biggest threats looming over humanity flash into focus through footage of the flood-threatened city of Venice and of far-right rallies in Germany. 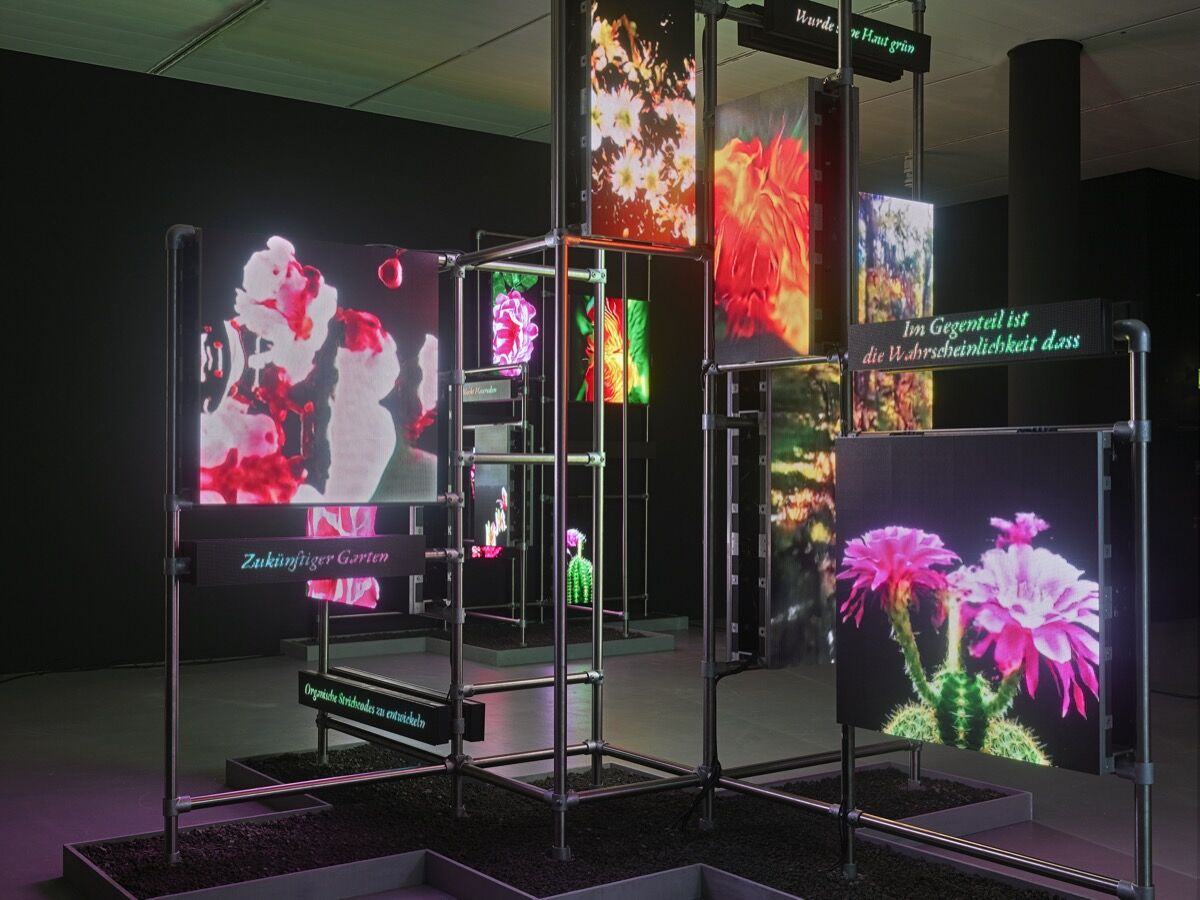 In The City of Broken Windows (2018), two screens face each other in a long gallery. In one film, an AI company seeks to develop a security system that recognizes the sound of breaking glass, and windows are repetitively smashed with large hammers. Opposite this destruction on the second screen, activists repair broken windows in neglected urban districts in the United States—a response to the “broken window theory,” which maintains that evidence of vandalism can encourage more serious neighborhood crime.
The community volunteers mend the windows not with glass, but with trompe l’oeil artistic designs on cardboard to hide the damage and reduce the appearance of decay. A cheery activist explains that she paints hibiscus flowers on the cardboard substitutes for window panes, because they are familiar to the mainly Hispanic residents. “Better together! That’s my motto,” she says. 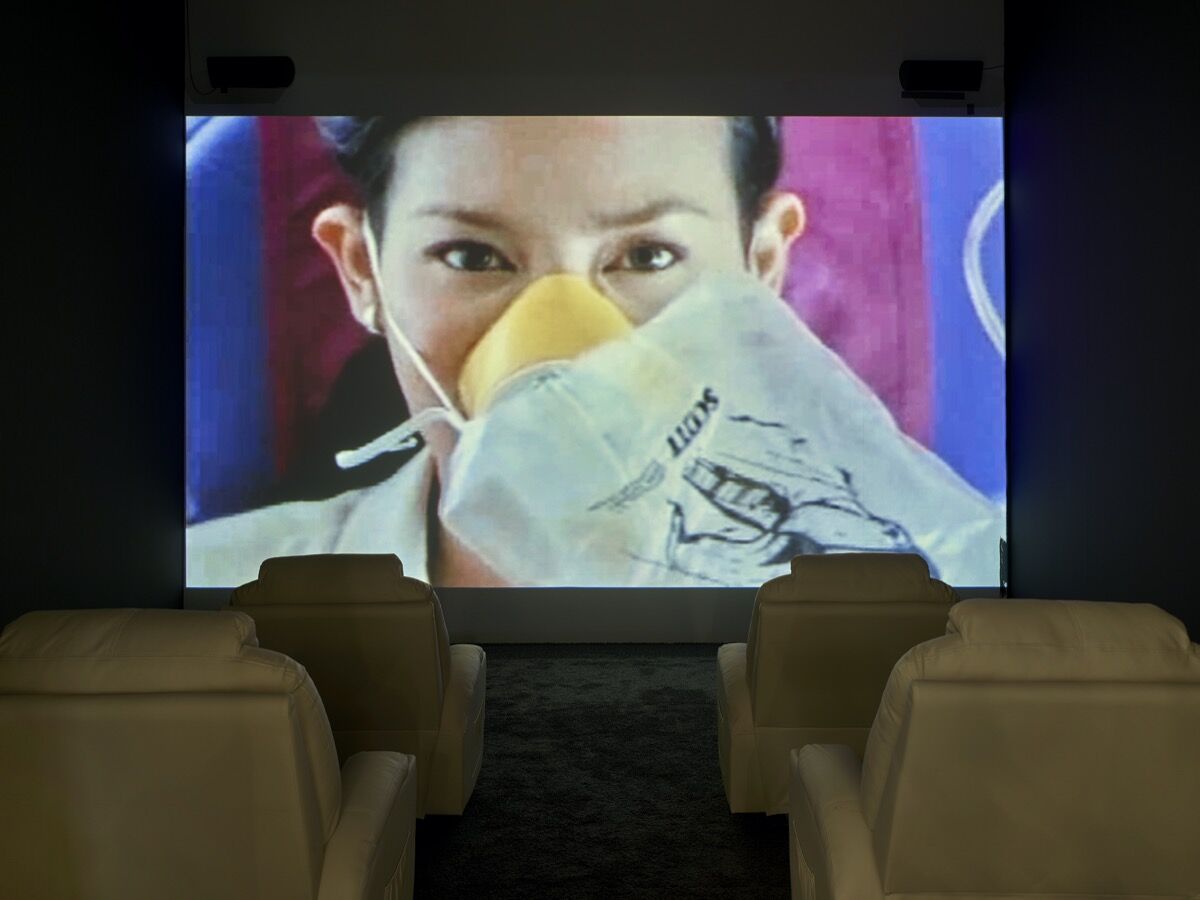 This defiant optimism in the face of despair and squalor is a glimpse of the hope that justifies the exhibition title. Along with Steyerl’s flashes of humor and blasts of upbeat pop music, such moments help to alleviate the gloom.
“I Will Survive” refers to Gloria Gaynor’s legendary disco hit that gained new resonance in the pandemic after Gaynor released a viral—in both senses—TikTok video of herself washing her hands while lip-syncing.
Like Gaynor, Steyerl seems to say, we will somehow survive.
Catherine Hickley
Related Stories