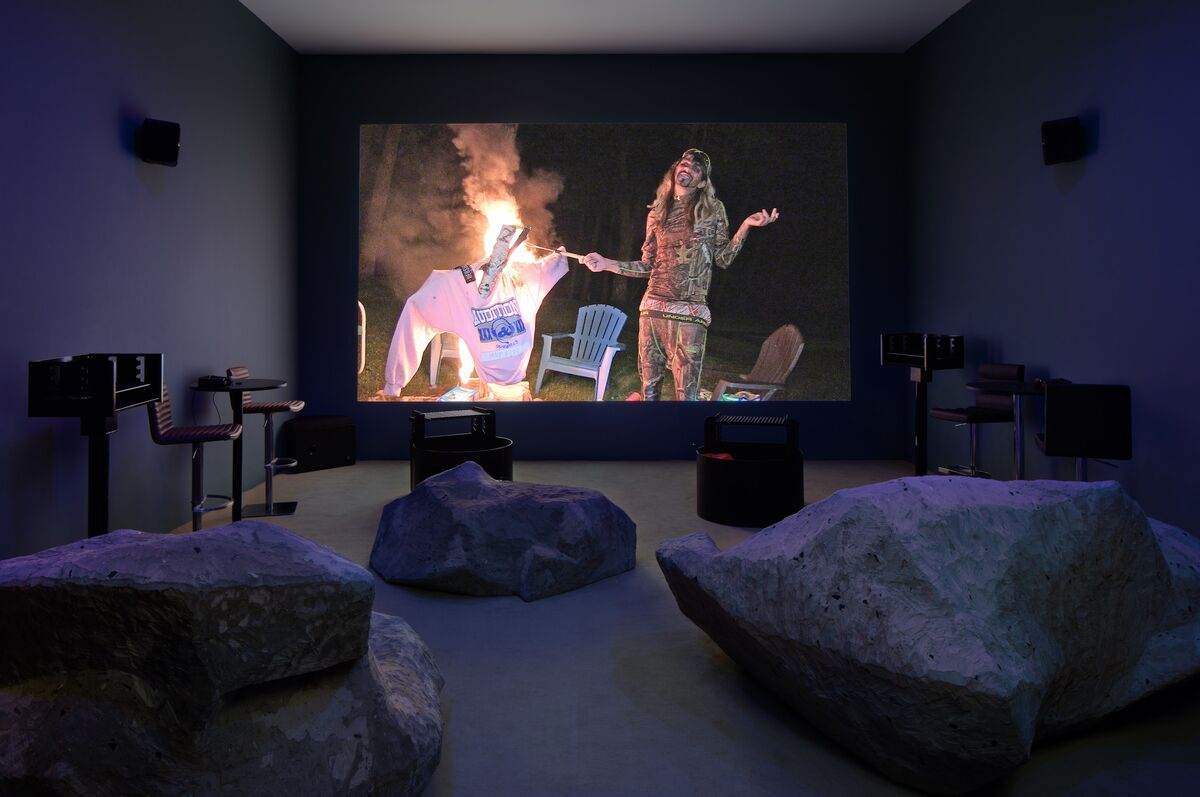 When Maurice Marciano, one of the founders of the Guess clothing label, saw
Lizzie Fitch and Ryan Trecartin
’s sprawling, multi-channel video installation, Priority Innfield (2013), at the 55th Venice Biennale, the work struck a chord. Around this time, Marciano (who is also a major collector) purchased the landmarked Scottish Rite Masonic Temple on Wilshire Boulevard in Los Angeles with his brother Paul, with intentions of transforming it into a private museum. Designed by California artist and architect Millard Sheets, the temple is an eccentric structure, spanning nearly 90,000 square feet over four floors, including a 2,100-seat auditorium; it had become a decades-old time capsule, left largely unused since the 1990s. Marciano offered Fitch and Trecartin the opportunity to use the space for a future work—an opportunity the artists jumped at. And so, Fitch and Trecartin were given free reign of the sprawling structure, limited only by a simple request: Don’t destroy the mosaics.
With the keys to the temple in hand, the duo and their collaborators had the ability to use the structure from the walls in. They chose to integrate what they recorded there with their growing archive of footage, which has come to supply the source material for their multi-screen installations. In their current exhibition, Fitch and Trecartin give a New York audience a glimpse of the latest results of this endeavor: a suite of four “sculptural theaters” accessed through a dark hallway at Andrea Rosen Gallery on 24th Street. The exhibition (which is Fitch and Trecartin’s first solo show with the gallery since they joined the roster in 2012) builds on the narratives of two previous works, Priority Innfield and Site Visit (2014)—the latter of which was the subject of Trecartin’s exhibition at KW Institute for Contemporary Art in 2014–15. 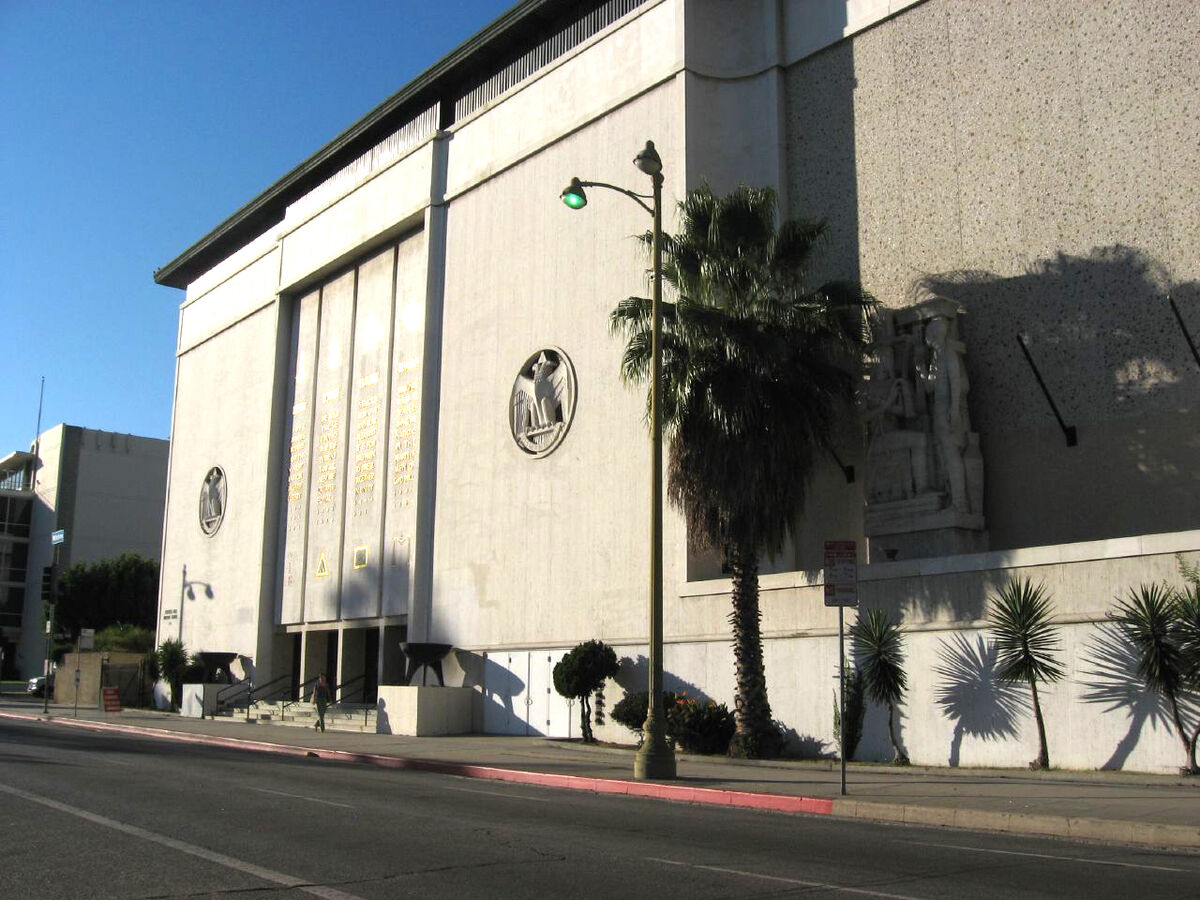 Upon entering the gallery, viewers are prompted to grab a set of headphones and immerse themselves in the duo’s high-velocity, madcap world. The majority of what is on display comes from video shot inside the temple, but it also draws on footage shot in the artists’ Burbank studio, on a road trip taken after the Venice Biennale, and clips from a grabbag of other time periods—some dating back to Trecartin’s high school years. Through editing, Trecartin mixes scenes from across the archive of footage that he and Fitch have created over the course of their long collaboration. When the video cuts away to a new shot, it’s hard to tell whether the scene is starting over, picking up where a previous one left off, or moving on to a new one.
At the temple, Fitch, Trecartin, and dozens of collaborators crowded into the building with GoPros, Handycams, DSLRs, drones, tripods—more or less every contemporary video capture technology available. Each person took on new and old vestiges of the artists’ ever-evolving, slippery characters; clad in shoddy costumes, wigs, and beauty products, they faced off against each other, wielding these different recording technologies. The plot they build is challenging, often slipping off into tangents and introducing new personalities. The acting is energetic, as individuals slide between roles constantly, destabilizing any sense of a fixed cast of characters. It almost feels as though the actors are trying to change faster than capture devices can record them. 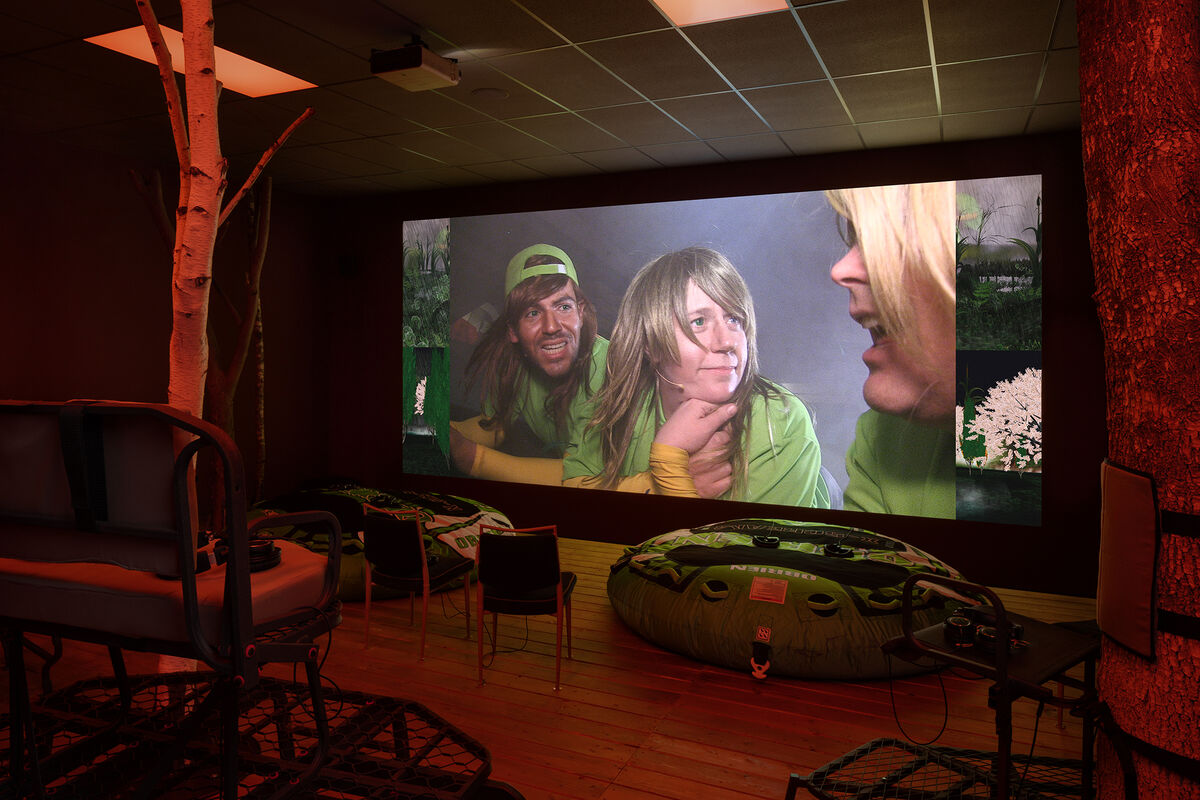 Advertisement
Some of the action occurs on a conventional stage, which seems incidental—perhaps a passing nod to the the way things were in the days of single camera viewpoints and Hollywood scripts. True to Trecartin’s past working methods, the actors (who extend to include cameramen) follow abbreviated scripts until the the text ends, and then keep going. They set off smoke bombs and pilot drones down unlit hallways; they pop open beers, smoke pipes, and scream in glee and terror. They wreck everything from the walls in.
The scenarios that unfold onscreen mix horror movie tropes with those of reality TV, recalling everything from The Bachelor or RuPaul’s Drag Race to genre originators like MTV’s Fear. The sculptural theaters serve as connectors between artist and audience, effectively extending the world onscreen into the gallery. The largest room contains a broad wooden deck pierced by a few stray trees and laden with hunting equipment. The setup evokes both the predatory and the voyeuristic aspects of surveillance, while multiple feeds of video play on an enormous projected screen. An adjacent room offers a nautical setting, locating viewers on padded seating pulled from a pontoon boat (some seats even retain their cupholders). The environment emphasizes the ways in which we are simultaneously captive to media and transported by it—the way media can act as a vehicle that brings us into alternate realities. All four sculptural theaters present similar (though differently executed) arguments about our relationships to media. 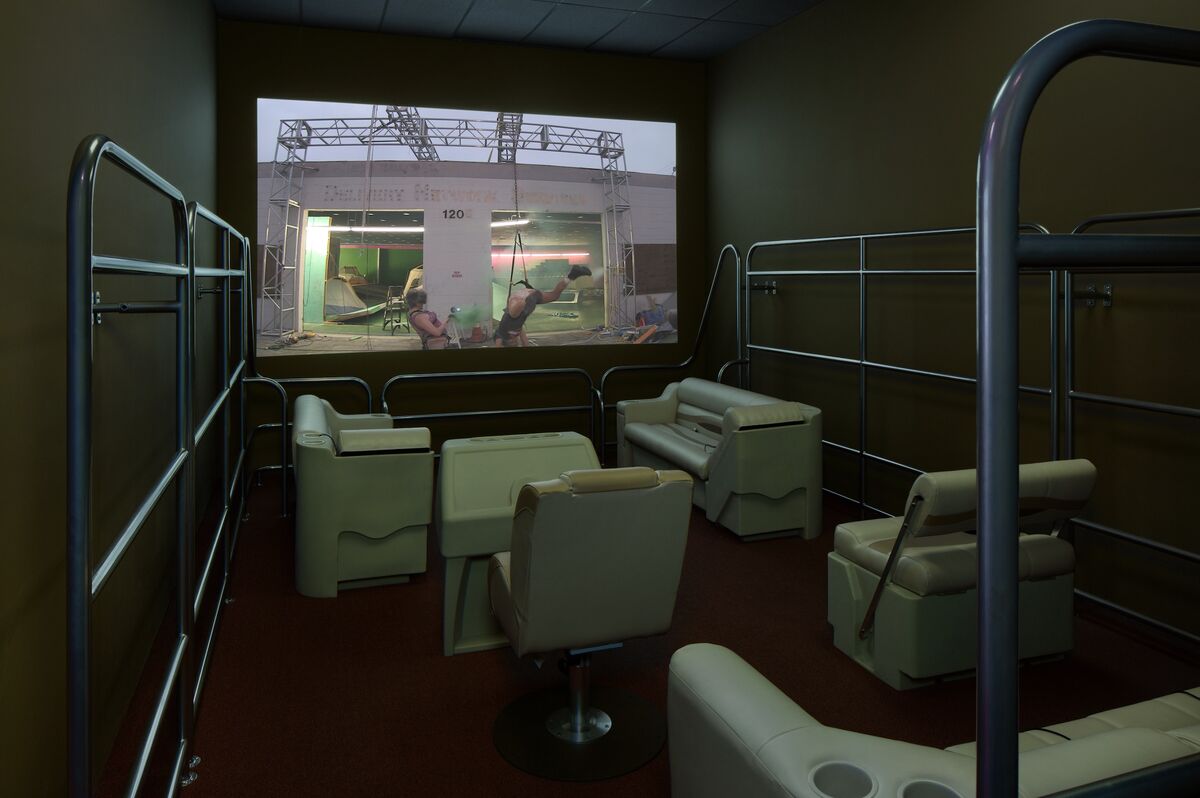 This layering of videos alongside elaborate viewing conditions invites viewers to engage in the exhibition, in a way that might resemble a “Choose Your Own Adventure” novel. But as viewers embark on one of several possible routes through the exhibition and gain access to Fitch and Trecartin’s dark, overwhelming world, the experience may become comparable to being a tourist in a big city without a map. As time elapses within the exhibition, a sense of suspense prevails, leaving the viewer yearning for answers and consumed by the chase.
Ian Epstein
“Lizzie Fitch / Ryan Trecartin” is on view at Andrea Rosen Gallery, New York, Mar. 22–Apr. 20, 2016.
Related Stories