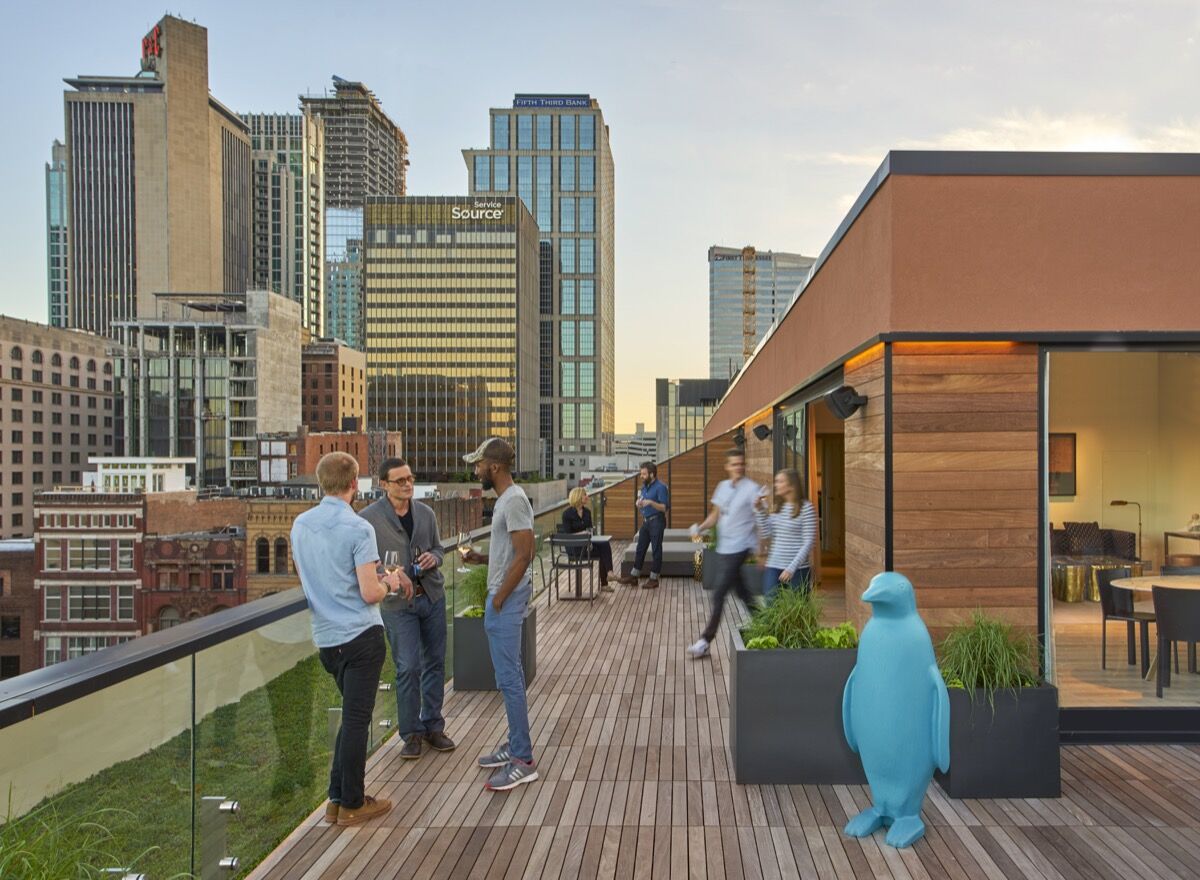 Walking into the 21c Museum Hotel in Nashville you’re greeted by an untraditional concierge: a bright blue penguin, gazing into the vestibule through a glass wall from the lobby. The four-foot sculpture, made by European artist collective
Cracking Art Group
, appears quite at home in a hotel that hosts the traveling and the transient. It’s one of many penguin sculptures that populate the hotel; all of them are periodically moved, popping up in the elevators and at the restaurant, roaming the building as if it were their own.
Behind the penguin, projected across the walls of the lobby proper, are massive, mostly real-time videos streaming footage of what is directly on the other side of each wall, literally dissolving boundaries within the hotel. Like the penguin, this installation, by artist
Serkan Özkaya
, is unexpected. But then again, one doesn’t expect to encounter a hotel that doubles as an art gallery.
Özkaya’s piece—playful, entertaining, and a bit disorienting—serves as a fitting declaration of ambition for 21c, a chain of now seven boutique “museum hotels.” That self-description is earned through a combined 70,500 square feet of exhibition space across all of its locations. Founded in Louisville in 2006, the brand has expanded in scale across the South, with its newest outpost in Nashville sporting three floors of exhibition space. 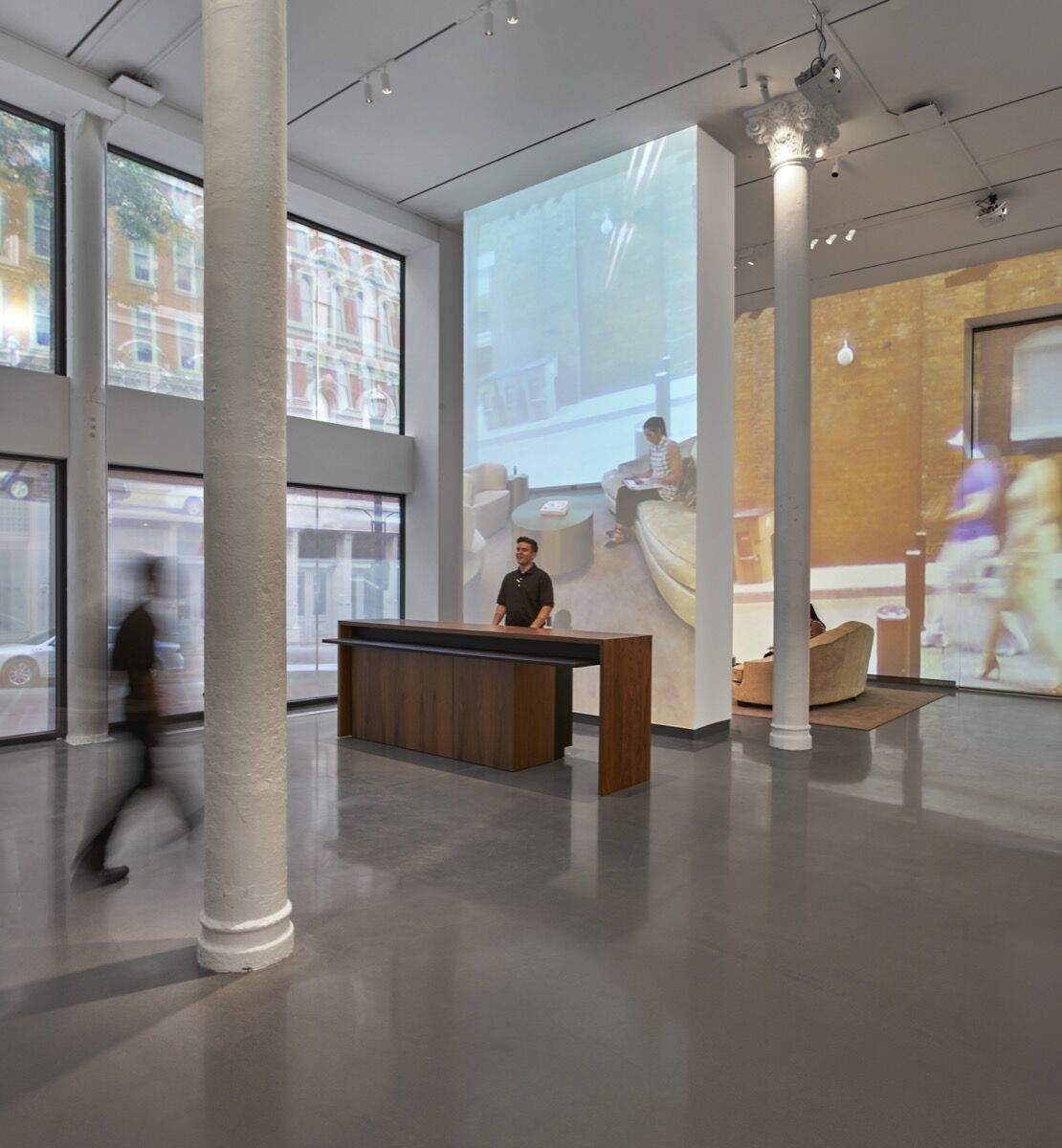 Serkan Özkaya, An Attempt at Exhausting a Space in Nashville, 2017. Photo by Mike Schwartz. Courtesy of 21c Museum Hotels. 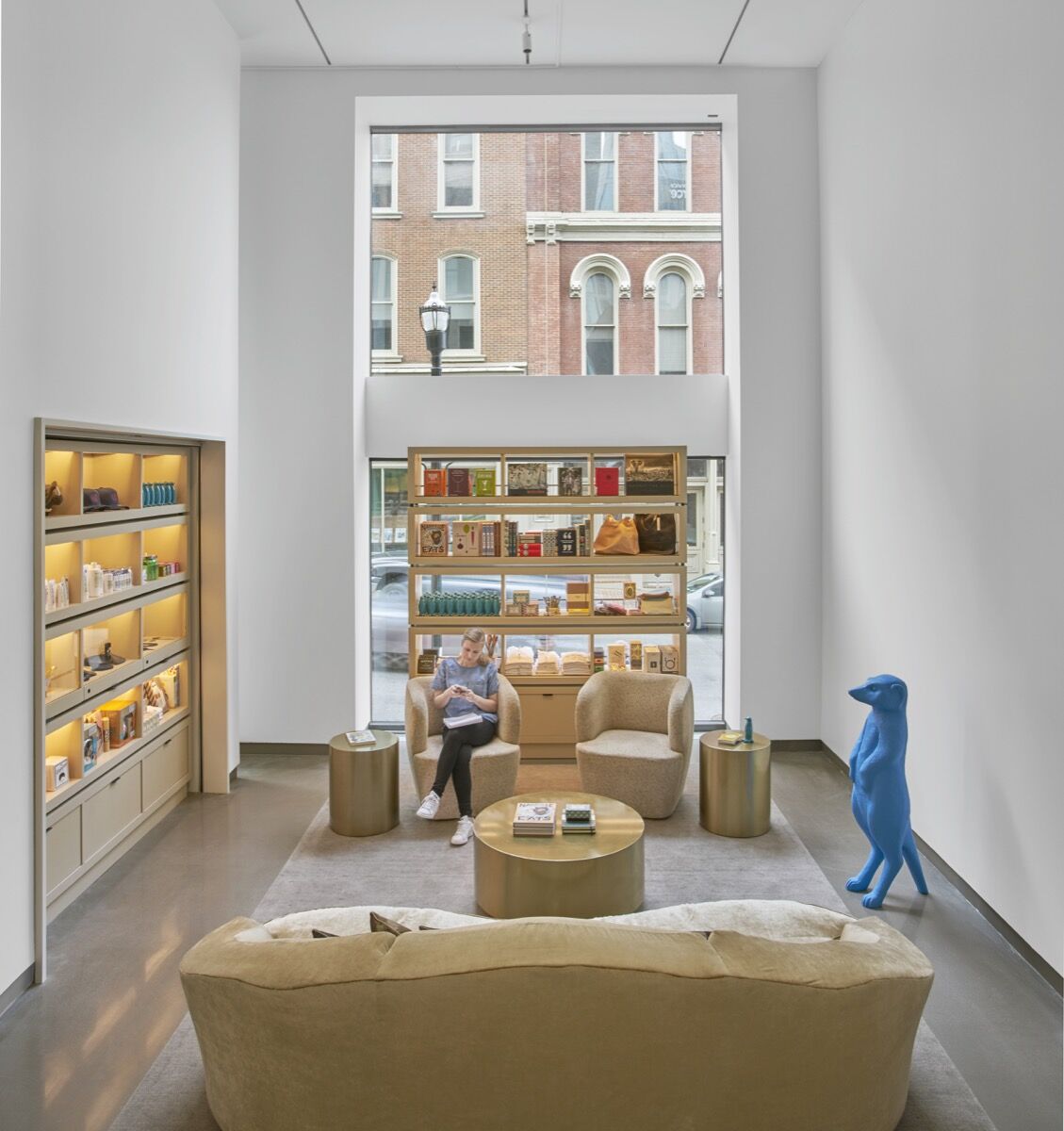 The art featured in the hotels is primarily drawn from the collection of 21c founders Laura Lee Brown and Steve Wilson, with loans from artists and several cultural institutions as well. Currently, about 35 percent of its collection is cumulatively on view. The self-stated mission is to erase barriers, making the 21st-century art in the collection present and accessible in Nashville through galleries that are free and open to the public 24 hours a day and a spate of related programming.
“The idea of connection and engagement and broadening access to thought-provoking contemporary art—not art as decoration—is what separates what 21c does from many other hotels and for-profit companies which use art for many different things,” said Alice Gray Stites, chief curator and museum director of 21c. “For 21c, it’s a museum mission.”
In an age of private museums, the “hotel museum” is a novel twist, particularly in locations like Nashville, where local artists and members of the cultural community will tell you there needs to be more institutional support of the arts, in any and all forms. Despite the boom of wealthy collectors setting up their own institutions—an idea Brown and Wilson toyed with—private museums are generally not self-sufficient, but rather dependent on the continued largesse of their benefactors, making their sustainability years into the future more of a question. Having revenue generation built into the museum model through a hotel mitigates such financial pitfalls. 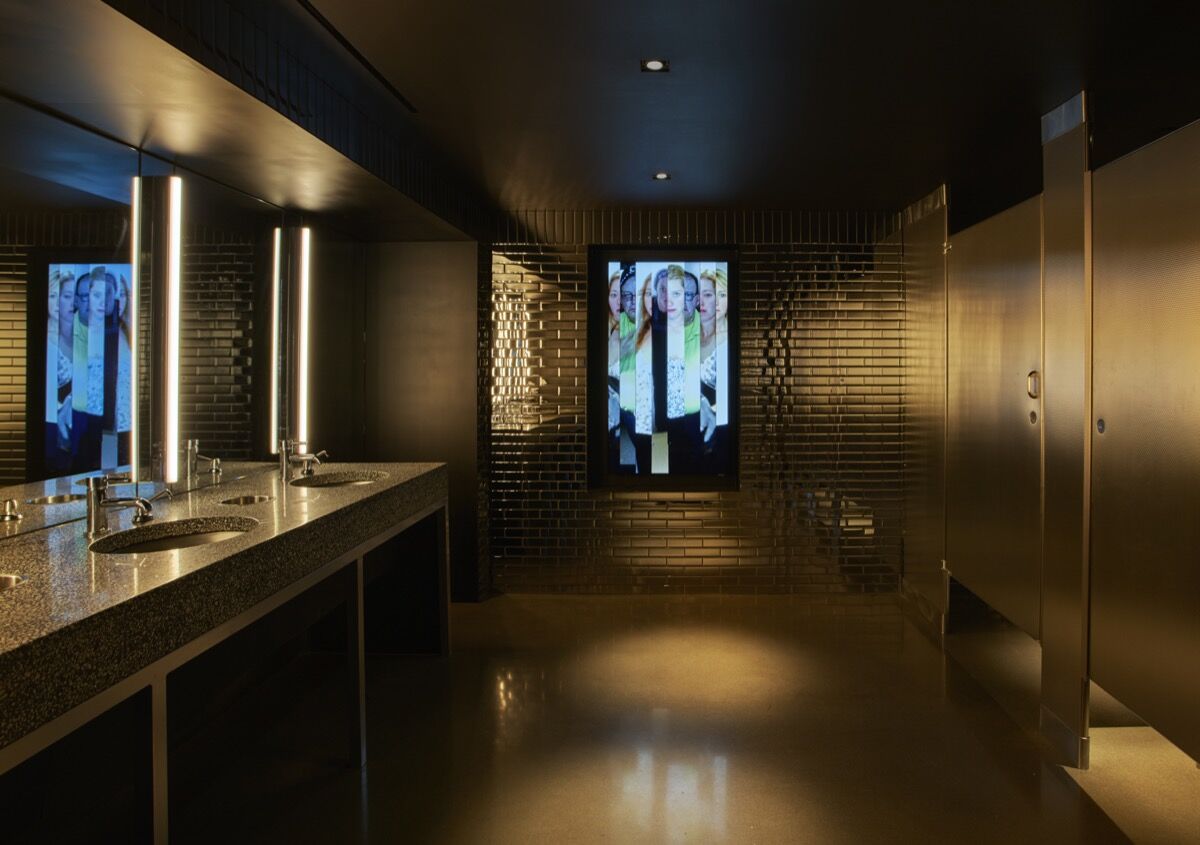 Advertisement
“The operations of the hotel and restaurant support the operations of the museum,” said Stites, “and we have begun some direct acquisitions.” Each year, 21c purchases a work for the hotel’s collection from the Moving Image art fair. One example of this is
Claudia Hart
’s The Flower Matrix (2016), located in a hotel conference room; viewers can download an app to bring the piece to life through augmented reality.
Other than the conference rooms and three hotel rooms designed by creatives (artists
Sebastiaan Bremer
and
Yung Jake
, actor Adrian Grenier), the galleries within 21c appear like those found in a museum, with white walls and wall text, all of which is written by Stites. She notes that the museum side of the operation has a “lean” team of 18, with shows curated from headquarters, though there are staff at each specific location to arrange for local programming.
The exhibition on view now in Nashville, “Truth or Dare: A Reality Show,” features over 100 works from artists across the world, and intends to comment on the blurred lines between fact and fiction. With so many pieces in numerous mediums—video, sculpture, photography, even augmented reality—by artists from 23 countries, the theme feels more like a prompt than an impermeable curatorial boundary. 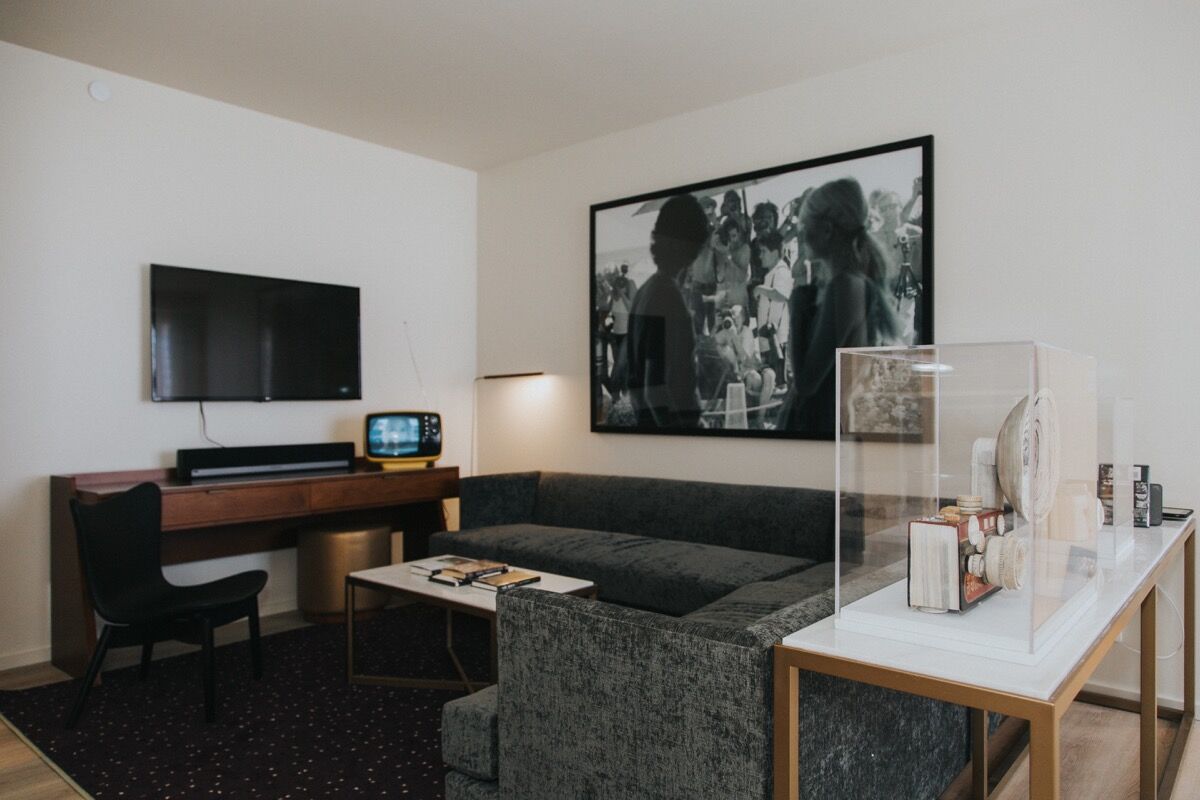 Like Özkaya’s, some of the works play with the location in a hotel. One piece by
Alejandro Diaz
features wires jutting out of a wall and a handwritten “DO NOT TOUCH” sign in cardboard—in this case a work of art, but what could easily be seen as a hastily performed maintenance job waiting for an electrician to correct it. There are also creative placements of the work—in elevators, and also in dedicated spaces along each floor where local artists are on view as part of the hotel’s “Elevate” program.
Among some of the highlights of the exhibition are
Pedro Reyes
’s Lady Liberty (As Trojan horse) (2016), which shows the Statue of Liberty on tank treads, a comment on how a rhetoric of freedom is often used as a mechanism for conflict. On the flipside are the serene cloud works of
Leandro Erlich
. His 2011 La Vitrina Cloud Collection (Venice) is comprised of ethereal three-dimensional images of clouds from specific days and times in Venice, displayed like scientific artifacts in a glass case.
When the show leaves this 21c location in about seven months, it will reappear at another location, likely somewhat modified. The ability to shift a traveling exhibition and “recalibrate depending on current events” is a key difference from traditional institutions, Stites said, adding that “the goal is to maintain museum standards of quality in terms of the art, and the curating and the programming but we don’t have to play by all the museum rules.” You can even walk through the galleries with a drink in hand. Official tours are given regularly, though staff on hand at other times to speak with guests about the exhibition. 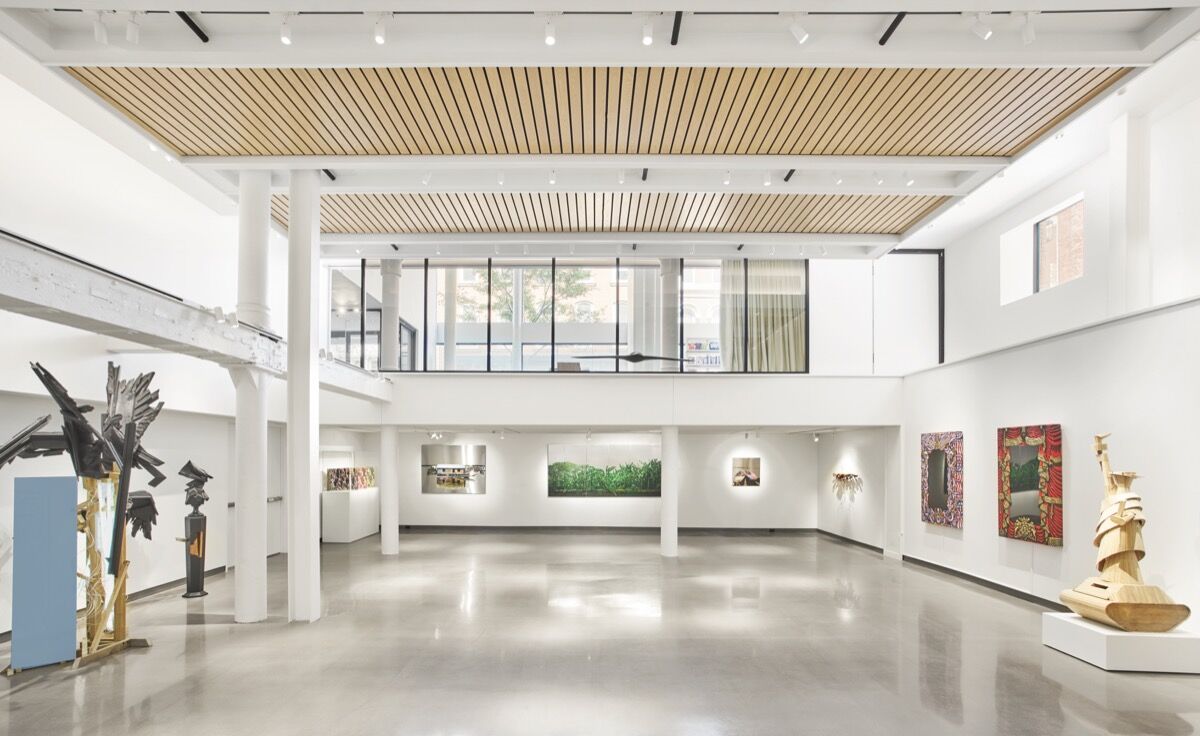 Outside of that, there is no education department, but events, panels, and discussions are to be a staple going forward. While I was in Nashville, the 21c featured a conversation on
Sharon Louden
’s book, The Artist as Culture Producer: Living and Sustaining a Creative Life, with contributor
Matthew Deleget
on (for lack of a better description) how to work as an artist. At the end, there was a free-flowing Q&A between the audience and the speakers, with many in the crowd describing a deep love of the city and its creative community, along with an undertone of frustration over the difficulties and challenges that come from working in a place without robust institutional support for art.
For all these reasons, approaching a museum hotel in Nashville is fundamentally different than in New York City. As artist Brian R. Jobe, who runs Nashville gallery Seed Space with his wife Carolyn, told me, the museum hotel might, at times, be one of the main places exhibiting contemporary art in the city. Jobe, who also co-founded Locate Arts, which promotes culture and artists across Tennessee, is working towards an ambitious biennial that would stretch across the state, as part of an effort to raise consciousness about the arts. It’s an initiative Stites told me 21c would look to participate in.
Nashville faces challenges in terms of building the creative infrastructure necessary to support and finance the creative talent that exists there. But while some might be interested in constructing an arts scene in the model of New York, a more nascent community offers the opportunity to consciously construct something that better suits Tennessee, not simply commercially, but also in terms of people in the state.
Channeling all the city’s creative energy into a dollar sign and a red dot on a gallery placard isn’t the goal. In fact, getting away from dollars and cents, to convince people in Tennessee that art has deeper value, is important, Jobe noted. “Art is thought about in terms of how much it costs,” he told me, and not often enough as “an experience that can change a person.”
Isaac Kaplan is an Associate Editor at Artsy.
Related Stories