Rob Sharp
Jun 24, 2016 1:39pm
Looming above the Queen Elizabeth Olympic Park in Stratford, east London,
Anish Kapoor
and engineer Cecil Balmond’s scarlet skein of twisted steel—the ArcelorMittal Orbit—is a sculpture that sticks out against the glowering cloud of a damp day in London.
To Londoners, the 114.5-meter tower is symbolic of the glory of the 2012 Olympics, for which it was built, and the hubris of the city’s former mayor, Boris Johnson, one of those who pushed for the over £19 million project’s construction. Now, its overseers hope it will be become renowned for the world’s longest tunnel slide—tacked onto Kapoor’s original artwork to raise revenue—which loops around and through its center, and opens to the public today. 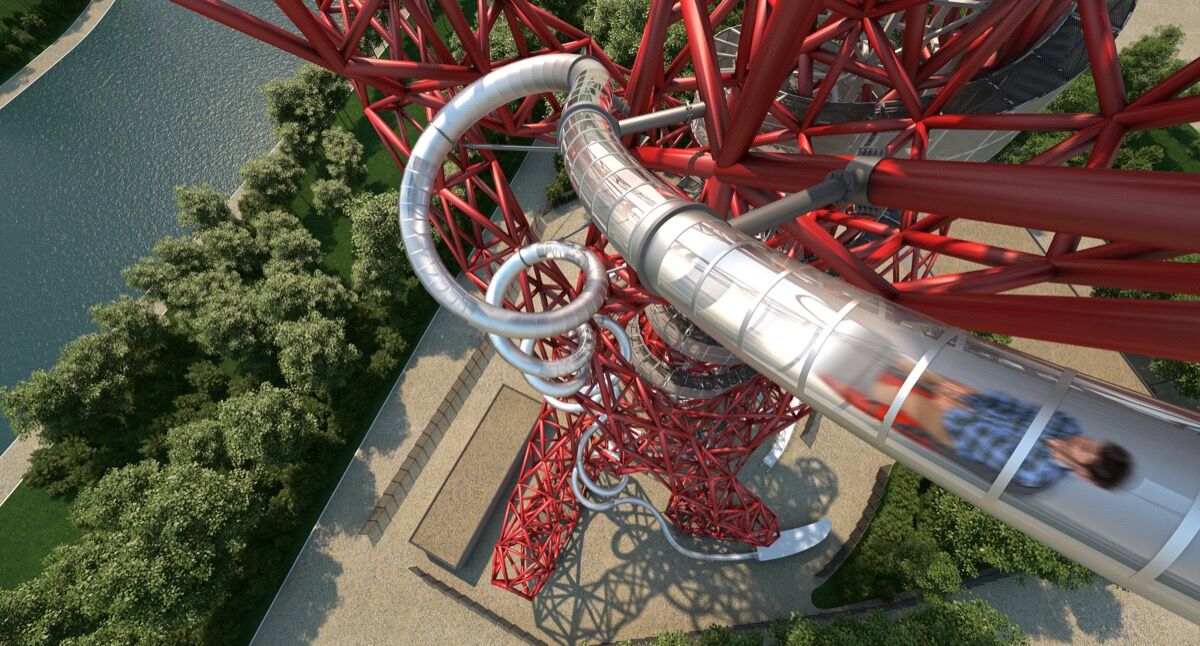 Visiting the press view of the slide’s opening on Thursday evening, it was hard to ignore both the torrential rain and the fact that the most significant referendum in recent British political history—whether the United Kingdom should leave the European Union—was reaching its close. The results are now in, and Johnson, one of the catalysts of Britain’s now-victorious “leave” campaign, could be Prime Minister by the end of the year. In the light of this, visiting a totem to Johnson’s towering self-esteem hours before one of the greatest triumphs of his political career, in retrospect, seems surreal.
When I visited, the hoards of press, presumably preoccupied elsewhere, were absent. The sculpture, a knotted matrix of girders that interlock and snake around a central core, is vertigo-inducing as one walks towards the exterior, and it is easy to pick out the 178-meter silver slide created by artist
Carsten Höller
, which by its nature swirls and dips, naturally complementing the existing structure. Whether interactive spectaculars like Höller’s work are tasteful or useful is somewhat up for debate—when does a slide that adults pay at least £15 to ride stop being good art, and become an amusement park attraction?—but Kapoor, speaking at a press conference earlier this year, said he was happy to work with him, when it became clear Johnson was insisting on the slide’s addition to the original tower. “It’s one artwork becoming part of another work,” said Kapoor.
Before sliding, riders take an elevator to one of the Orbit’s two viewing galleries, which boast 20-mile views across London and digital interactive displays about the skyline. Descending a flight of stairs to the launch deck, one is handed protective elbow pads and a head-guard, climbs onto a mat, and is instructed to lie back, before launching into the slide tube and journeying back to earth in 40 seconds.
It’s fast—and inarguably a lot of fun. As the rider turns through 12 twists, the red structure of the Orbit can be glimpsed through transparent polycarbonate panels, before those speeding down are plunged into darkness in totally opaque sections. While one can achieve speeds of 15 miles an hour, it feels much faster. Riders scarcely adapt to being corkscrewed before being birthed, shell-shocked, out on to the landing runway. “The artists see it as a piece of art,” said Peter Tudor, the park’s director of visitor services, at the launch. “We have a permanent Anish Kapoor in the park, similarly with Carsten’s work. At the same time it is an attraction we want people to come to.”
While a blast, the question remains—could the money have been better spent? And given the cash already invested, is it fair to charge? Locals may ask themselves this in the current political climate. Especially since much of the public may see the country sliding into recession before they slide down the Orbit—however enjoyable, and distracting from wider concerns, that may be.
Rob Sharp
Related Stories