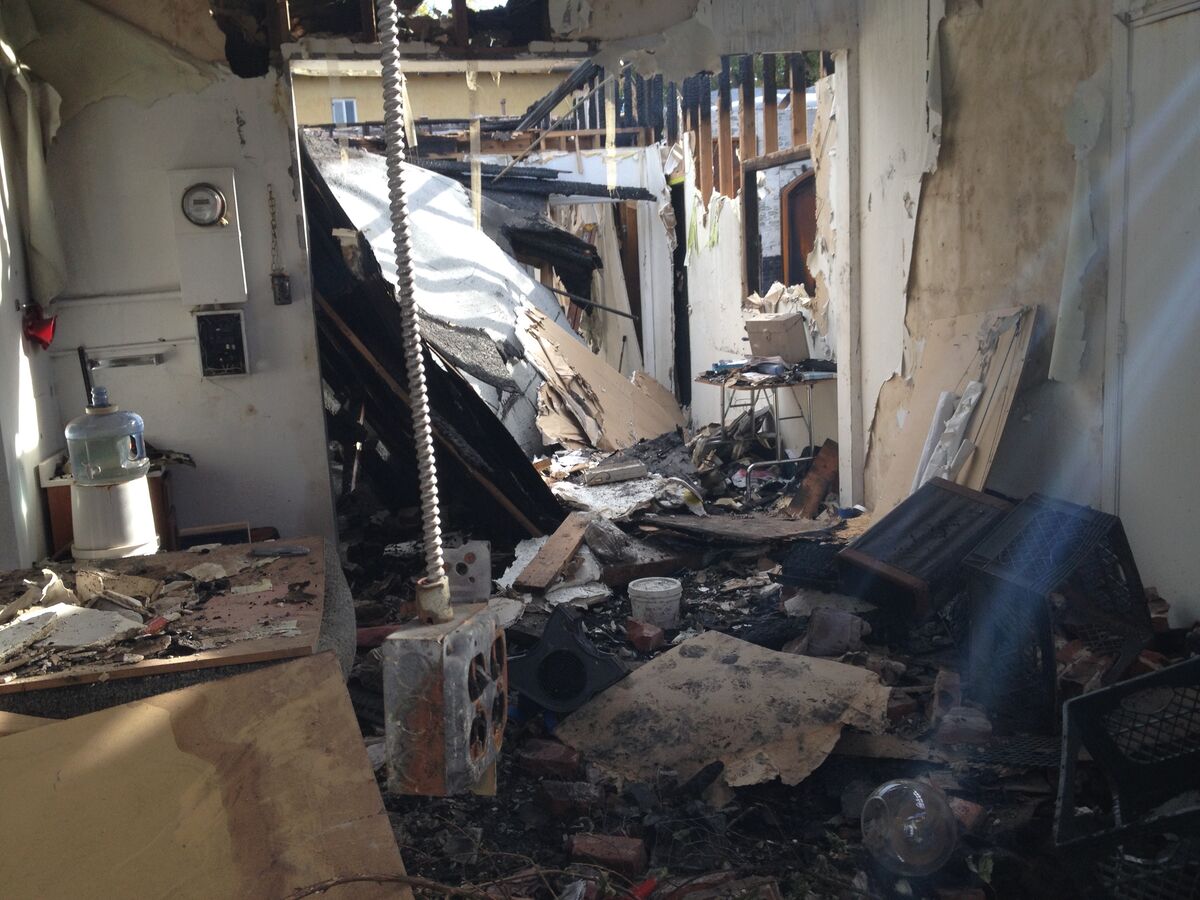 The Pasadena studio of Christian Cummings, who Jonathan Griffin includes in his book "On Fire," 2013. Photo courtesy of the artist.

In 2013, Los Angeles-based artist
Anthony Pearson
was hard at work converting an old auto garage into his new studio. After several months, it was finally ready, and he had just transferred the contents of his old studio in Culver City to this the new one in West Adams. Working late with his assistant, Pearson parked a U-Haul filled with his work and materials inside the renovated garage. That night at home, while eating cereal and checking the news, he saw an item about a structure fire in West Adams. He felt a sense of terror as he clicked through and saw helicopter footage that confirmed his fears—the fire had consumed the new studio, and all of his work inside. Some 100 firefighters fought to control the blaze, and when the smoke cleared, the garage was gone; the U-Haul was now a liquified heap under burnt debris.
“I knew that he was building the studio out,” says L.A.-based art critic Jonathan Griffin, an admirer and friend of Pearson’s. “It was maybe a year in the pipeline, and then when it burned it was all the more shocking. I really felt like I’d lived through it with him.” Pearson’s story is one of 10 such artist studio fires that Griffin chronicles in a new book, On Fire, published by Paper Monument. “That’s the point,” he says of Pearson’s experience, “at which I really felt like there’s something in here that deserves to be looked at more closely.” He sought out more artists who had been through similar experiences, including
Matthew Chambers
,
Catherine Howe
,
William J. O’Brien
, and
Brendan Fowler
. “I imagined before I started on the book that it might end up being a story about artists’ relationships to their own archives of work,” Griffin reflects. “I thought it was an interesting way of talking about what happens when they have their work taken away from them. But on the whole it wasn’t about that at all—it was about how they feel when their workspace is taken away from them.”
“Whenever I met these artists and talked to them about these really traumatic experiences,” Griffin explains, “I was aware that I was trespassing into very personal territory, which is partly why I wanted to have the artists lead the telling of these stories themselves.” In Pearson’s case, the initial sparks came from the electrical wiring, but the sources of fires discussed throughout the book vary widely, as does the destruction wrought. A hazard of working with oil paints, for example, is that a crumpled cotton rag soaked in linseed oil might at any moment burst into flames. “It’s become something of an urban myth,” Griffin says of this precarious medium. “The painters I spoke to generally said that it was something you get told in art school but nobody really believes is true. So when it actually happens, people can’t quite believe that this is a real phenomenon.” 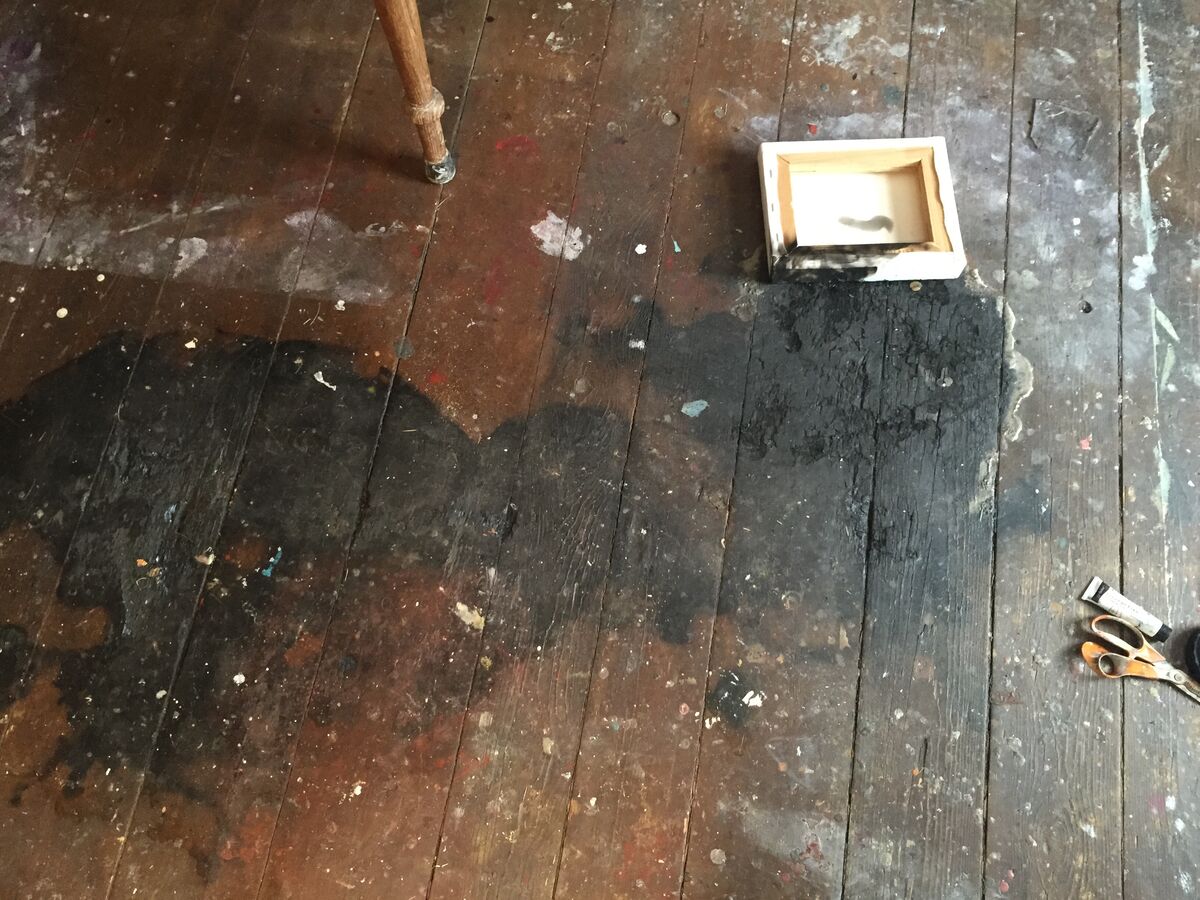 The floor of Catherine Howe’s studio, Germantown, 2011. Photo courtesy of the artist.

Catherine Howe
dealt with this alchemical risk one night in 2011 at her home in the Hudson Valley. She tells Griffin the story of how she finished painting one evening and unintentionally left her second-floor home studio in a nearly perfect setup to test linseed oil’s combustibility: an unfinished work, crumpled, oily rags, various other volatile liquids scattered on the floor, and a window open just enough to let in a warm breeze. Drifting off to sleep, she smelled smoke, figuring her nearest neighbors, half a mile away, were starting a late-night barbecue, before remembering they’d moved out. She sprang into action and shut off the house’s electricity before realizing that the only way to call 911 was her cell phone, which was upstairs. She ran to the neighbors’ former home, relieved to find the door unlocked and a phone with a live dial tone. The firemen arrived quickly to extinguish the blaze and even managed to salvage the major, in-progress painting that helped cause the episode. Howe lost a few smaller works.
After the flames come the long, arduous challenges for artists piecing their practices back together; this is where doubts, insurance, and litigation replace heat and smoke. A fire can raise questions that often confront the very idea of art itself. Kate Ruggeri, a young painter whose studio was one of many that vanished in a fire that leveled an entire Chicago building full of studios, wondered if she was even an artist anymore. Matthew Chambers and Brendan Fowler, who shared a studio to which a fire spread from an adjacent furniture factory, were forced into a legal maelstrom between insurance companies competing to avoid paying out claims. Fowler, whose work includes performance, found himself trying to explain performance art to an audience of attorneys and assessors eager to assign blame. “It was really hard for Brendan and Matt to go through this torturous legal process,” Griffin says. “But actually what they went through is equivalent to what all these other artists go through—you’re forced to evaluate and justify your practice in, if you like, these kind of real-world terms. You have to say this thing that I do is worthwhile.”
Over a year after the fire, Griffin and Pearson returned to the would-be site of the artist’s studio. The old lot was vacant, an empty patch of concrete with a chain-link fence. They peeled back a section of the fence and looked inside. There was a wooden, shed-like structure on one side of the lot, where squatters had settled. The shed was strewn with takeout containers and papers, graffiti covered the walls, and there, inexplicably embedded in the grime, were a few of Pearson’s heat-warped contact sheets and singed, matted photographs. “I’m sure for Anthony it was extremely distressing to see his own work lying there in the dirt,” Griffin says. “But for whatever reason, he wasn’t too concerned with rescuing it, or hiding it, or even going back with a big bag and hauling it all away.”
While Pearson was as surprised as Griffin, since photos from the insurance claim show the lot cleared entirely, his reaction was strangely indifferent. “A contact sheet is this visual representation of the processes of refinement and selection and cropping and cleaning and presentation,” Griffin muses, “not only what goes on in the studio, but how the mess of the studio is honed and allowed to leave the studio.” Pearson peeled a few sheets apart, examined them coolly, and suggested Griffin take a few as souvenirs. Later, he told Griffin that the fire felt like a sign, like being struck by lightning, and mentioned that after the fire he discontinued six projects he’d been working on for nearly a decade. “Artists generally don’t go out of their way to repair extremely damaged things, with some exceptions,” Griffin observes. “The way they recover is to make new things.”
Ian Epstein
Related Stories